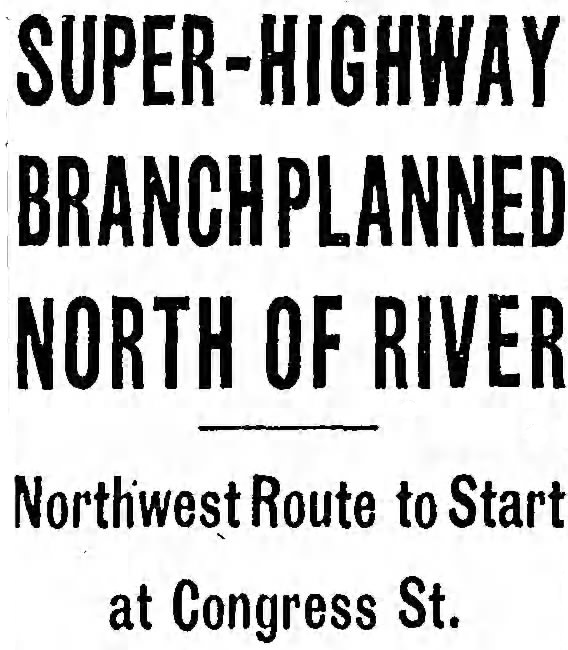 BY ROBERT HOWARD
The northwest super-highway, according to current plans, will start at Congress st. and will include a connection with the growing portion of the central business district north of the Chicago river, V. E. Gunlock, commissioner of subways and super-highways, said yesterday.

Gunlock said his engineers have agreed upon many of the details for the expressway just north of Congress st. It will be located between Halsted and Des Plaines sts., with ramps and interchanges permitting automobiles to turn eastward to the loop at several intersections.

That section will be the key connection when Chicago’s projected super-highways are completed. Virtually all highway planners have agreed that the connecting highway should be located at Union av., a block east of Halsted.

Right of Way Available
In that area, a right of way up to a block wide can be condemned and cleared to get the 250 feet of land required for the divided roadways to handle traffic safely and without interruption.

In addition to joining the northwest and Congress st. routes, the connection will lead southward to the Illinois and Michigan canal expressway and to the south route. As a double decker street, also serving as a distributor, Wacker dr. is to be extended south to Congress st. to handle cars at the edge of the loop, Gunlock said.

s approved by the city council, the northwest super-highway will stay on the west bank of the river’s north branch, generally following the vicinity of Elston av. once it threads its way thru the North Western and Milwaukee railroad tracks. 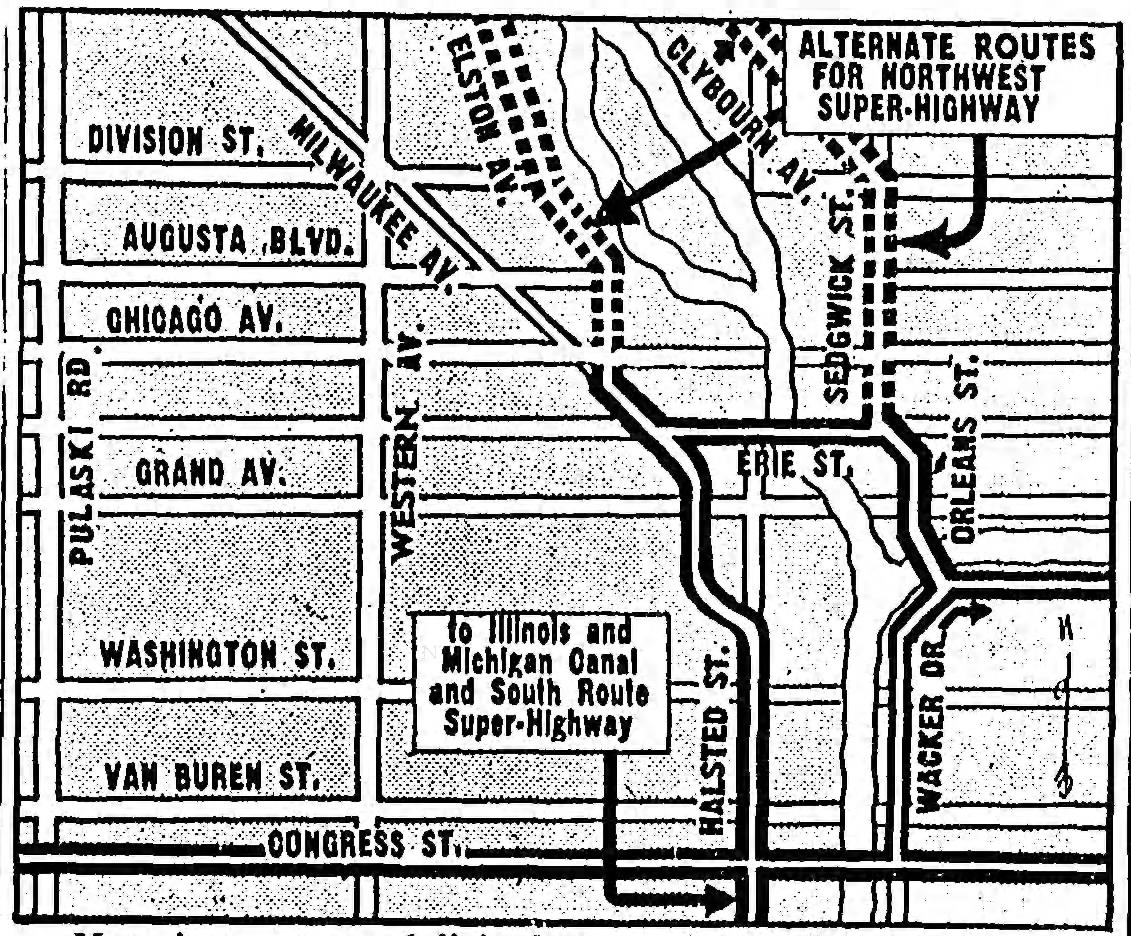 Viaducts Are Proposed.The theory that super-highways should be depressed under the cross-streets doesn’t always hold good and viaducts will be used to span many of the railroad lines.

State and county highway officials so far haven’t approved the location of the northwest route on the west side of the river, which the council settled upon after listening to aldermen from wards in that vicinity.

County engineers earlier recommended that the super-highway follow Clybourn av., east of the river, as far north as Barry av. That route, it was pointed out, would give better connections to the northern portion of the central business district.

East Branch Proposed.
Gunlock’s plans include a special northwest super-highway branch eastward on Erie st., across the river and then south at about Orleans st., crossing on another bridge just west of the Merchandise Mart to terminate in Wacker dr.

Traffic men for the city said automobiles could use the branch to get to the north side of the loop and to the rapidly growing business district along Michigan av. from the river to Oak st.

The engineering board of review recently estimated the cost of the northwest route, including the Erie-Orleans branch, at $18,333,000, between Van Buren and Division sts. From Division to Devin av., with longer mileage but fewer engineering problems, the cost was estimated at $30,667,000.

Ramps from the Congress st. bridge over the Illinois Central tracks now lead to Van Buren and Harrison sts., but not to Congress, but this will be changed as indicated above, with the construction of the Congress st. superhighway. Congress st. will be widened by means of arcades between Michigan av. and State st., according to latest plans. 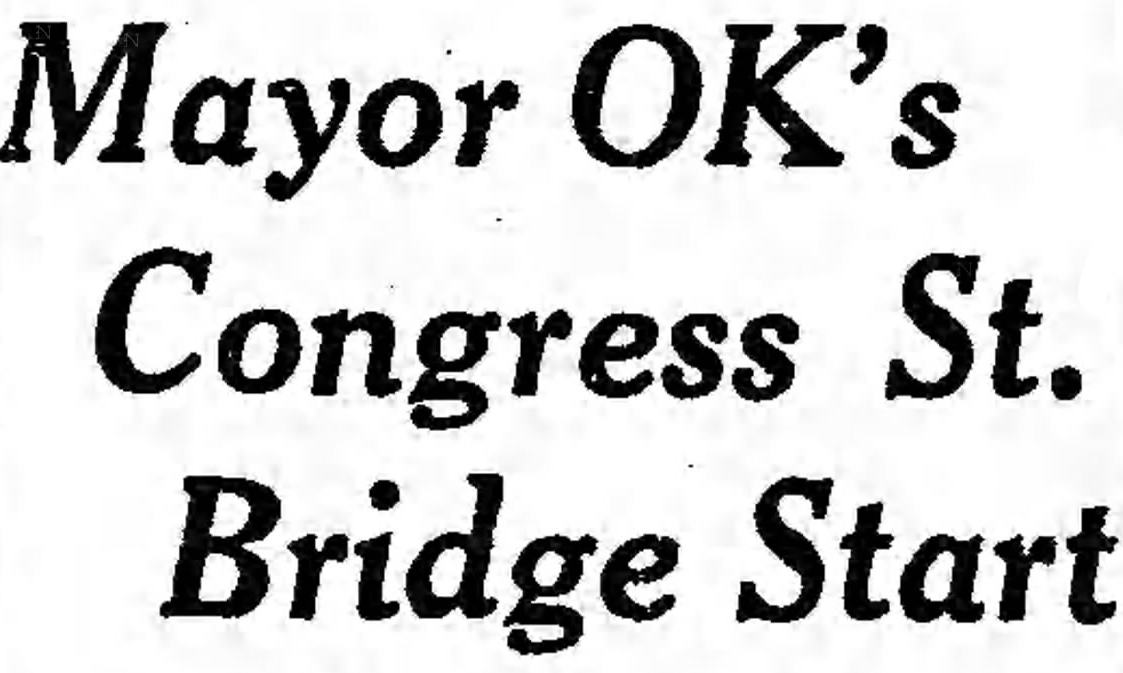 Mayor Kennelly yesterday gave the go-ahead signal for construction of the multi-million dollar Congress st. superhighway bridge across the south branch of the Chicago river.

Disregarding the warnings of his advisors, he asked Public Works Commissioner Hewitt to proceed in the same way Hewitt had in regard to the Laramie av. underpass.

On Friday Hewitt announced that the city was planning to start work on the Laramie underpass altho all the necessary land had not been acquired. 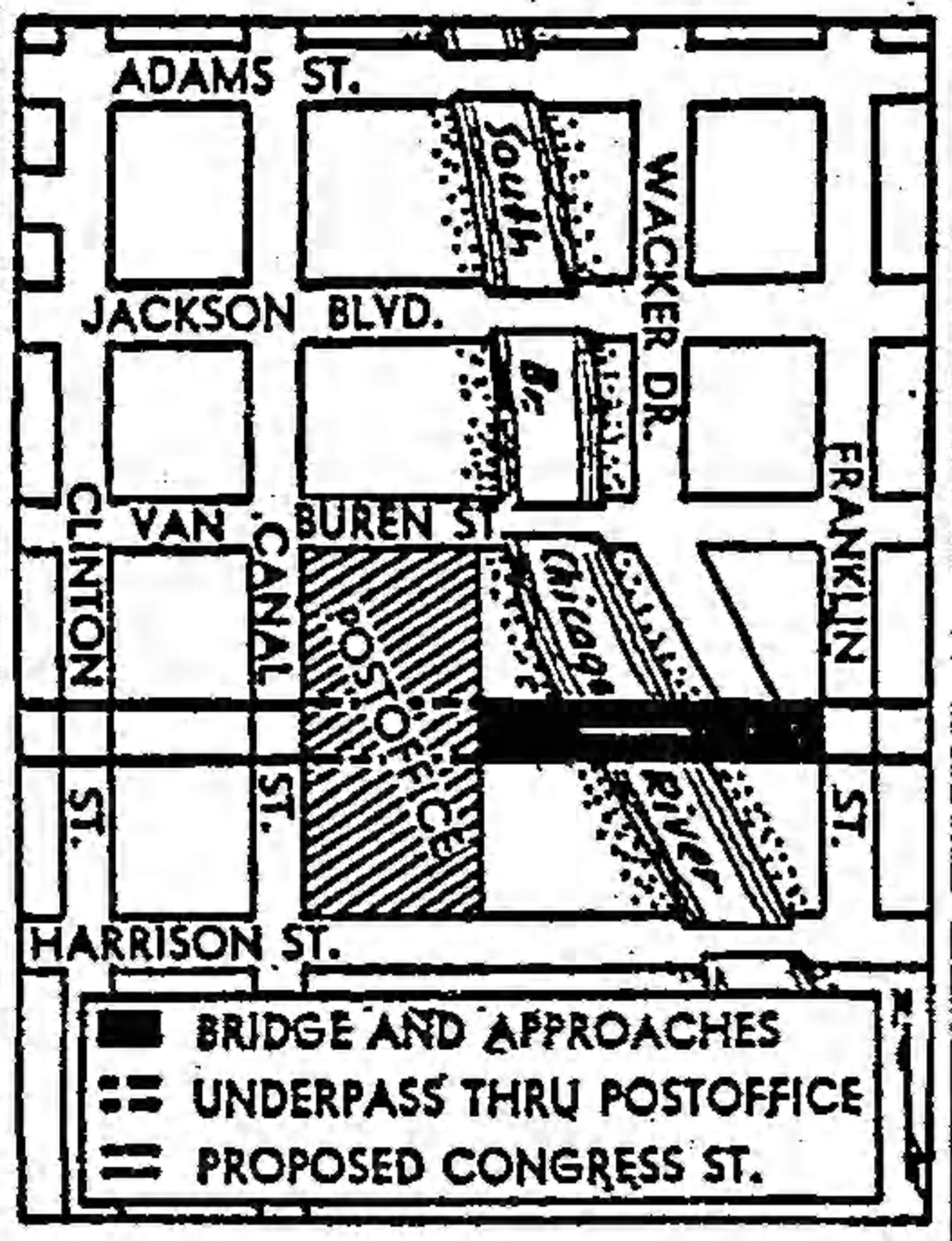 Several Parcels Still Needed.
Altho the mayor has been urging speed on both the Laramie av. and the superhighway work, his announcement came as a surprise to city hall officials. In the Laramie ave. project only one strip of property has not been acquired. In the case of the Congress st. bridge, however, there are several uncompleted deals for signicant pieces of land.

In the past it has been customary to delay construction until all the land is acquired.

The mayor Indicated he would continue to push aside legal red tape in subsequent superhighway work.

Must Adjust Specifications
Mayor Kennelly’s request means that specifications for the bridge will have to be adjusted so the city will not be left holding the bag in the event of unforeseen hitches in real estate acquisition; that Hewitt will have to ask state approval for the work, and that Purchasing Agent John F. Ward will then have to seek bids. Hewitt did not have time yesterday to figure out when the work might begin, but on the basis of the Laramie av. timetable, and assuming the necessary approval is received, it should begin by next summer.

The bridge project will carry the superhighway from a point under the postoffice building, across the river on a double bascule bridge (east and west bound traffic will be on separate bridges), and into a swirl of clover lea! turns that will connect with Wacker dr. and other loop streett.

Field work will begin tomorrow on the substructure of the 3 million dollar twin bridge which is part of the Congress st. super-highway development, Stephen J. Muchuda, city bridge and viaduct engineer, announced yesterday.

Michuda said the twin bridge construction will permit used of one span for traffic while the other is being repaired. The bridge leaves on each side of the river normally will be operated in unison thru a mechanical tie-in between gear trains but can be operated separately.

Each of the bridges will carry four lanes of traffic on a roadway of 43.25 feet wide. 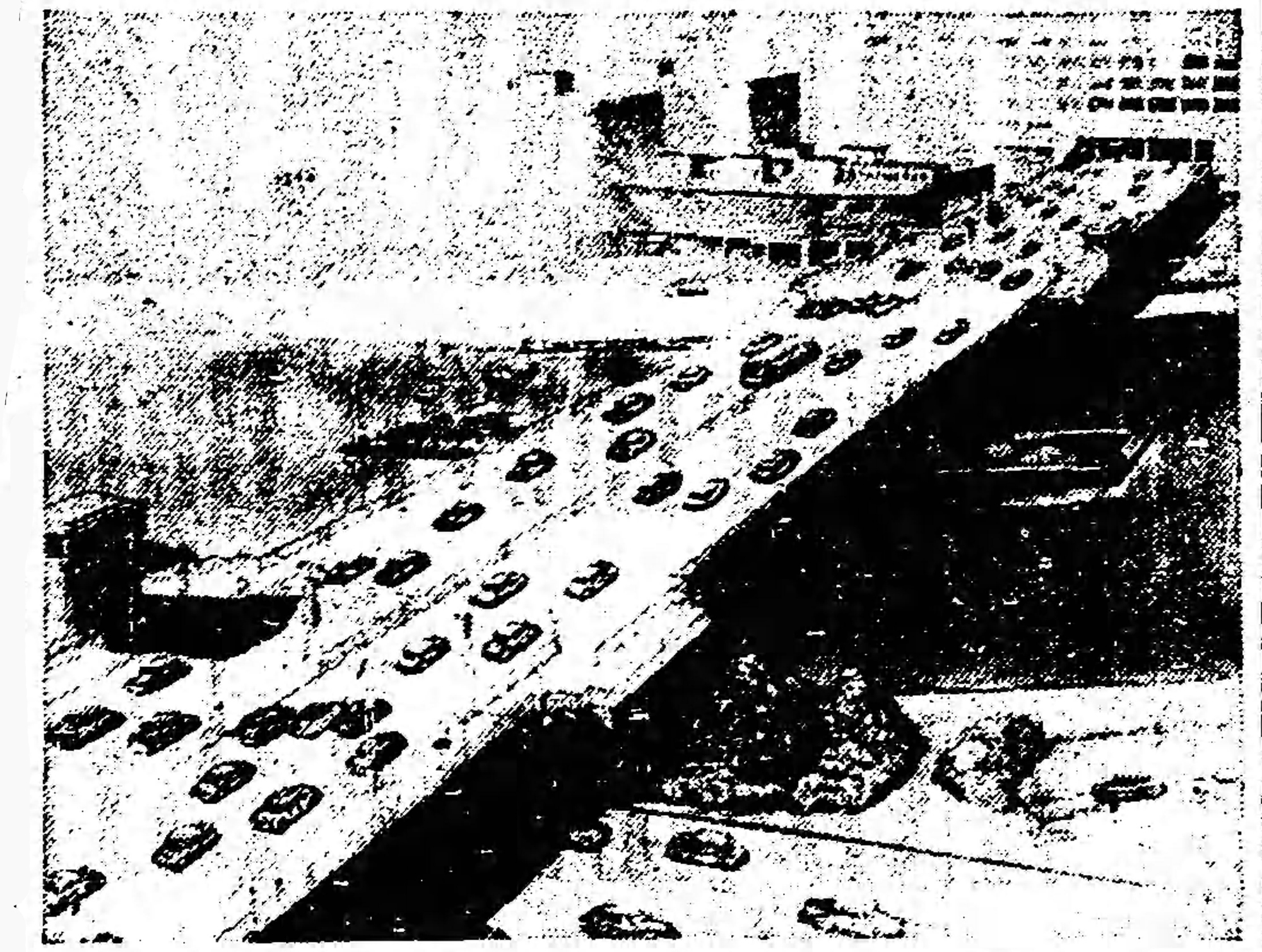 Artist’s drawing of bridge on Congress st. super-highway across Chicago river. View is looking west toward tunnel under post office. 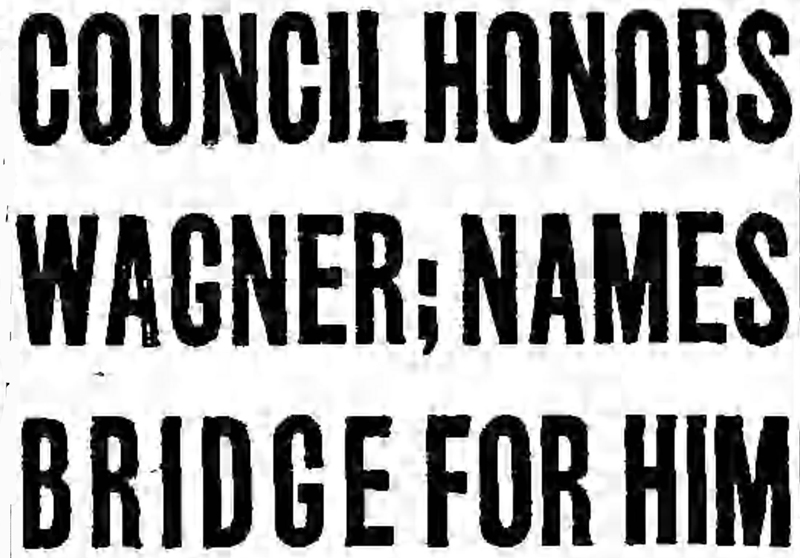 The city council voted yesterday to name the Congress st. bridge now under construction in honor of Ald. Clarence P. Wagner (14th), who was killed last Friday in an automobile accident near International Falls, Minn.

The bridge, to cost about 4 million dollars, will carry traffic of the Congress st. superhighway over the Chicago river southwest of the Loop

The resolution to honor Wagner was submitted at a session called by Mayor Kennelly as a memorial meeting for Wagner and to plan for the funeral at 10 a. m.. tomorrow in Visitation church. The aldermen and city officials will attend together and the city hall will be closed tomorrow morning.

Wagner. who was chairman of the council finance committee and administration fioor leader in the council, was praised in speeches by Mayor Kennelly and 17 aldermen, including both Republicans and Democrats. Once during his speech the mayor broke down and was in tears. 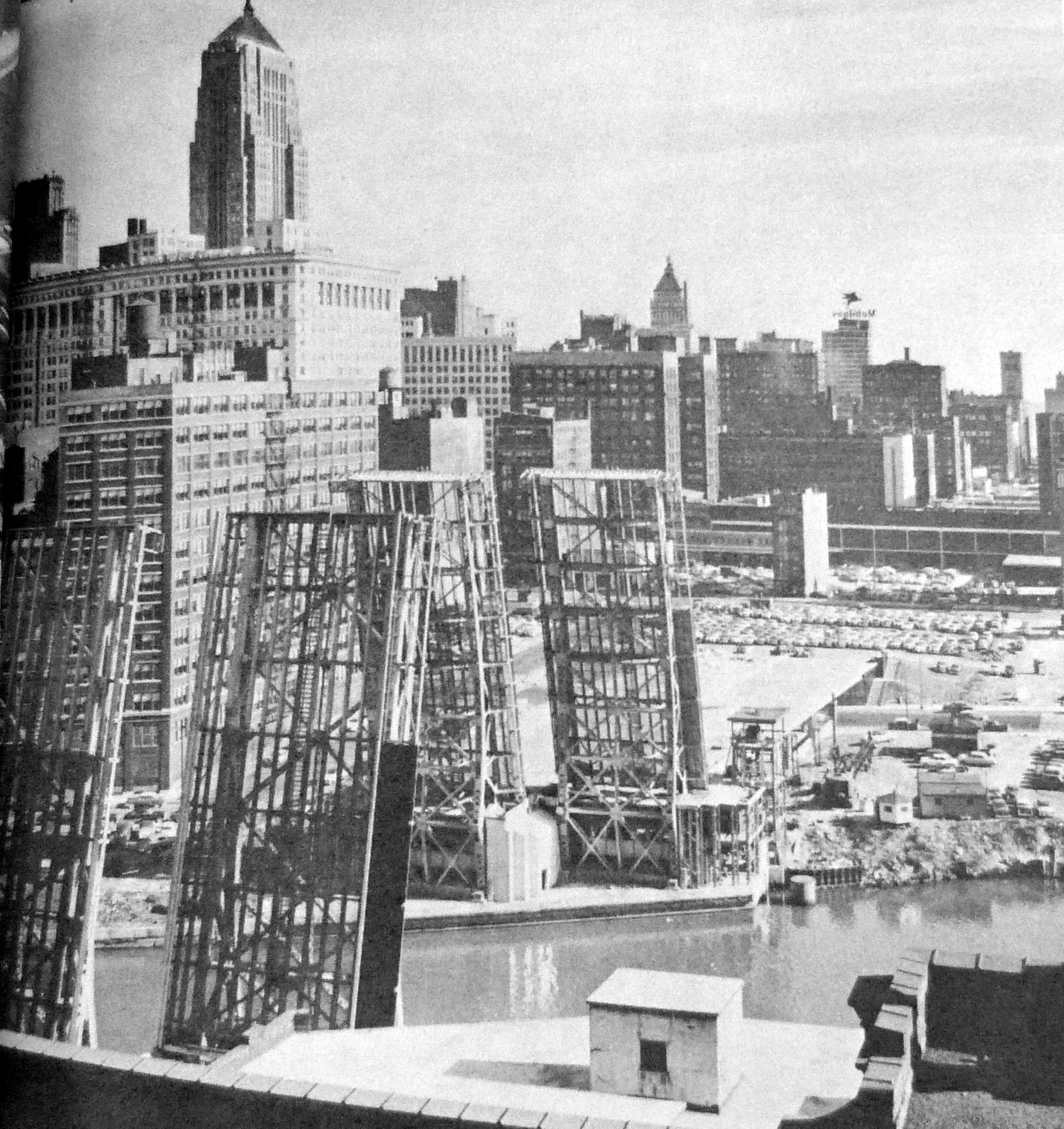 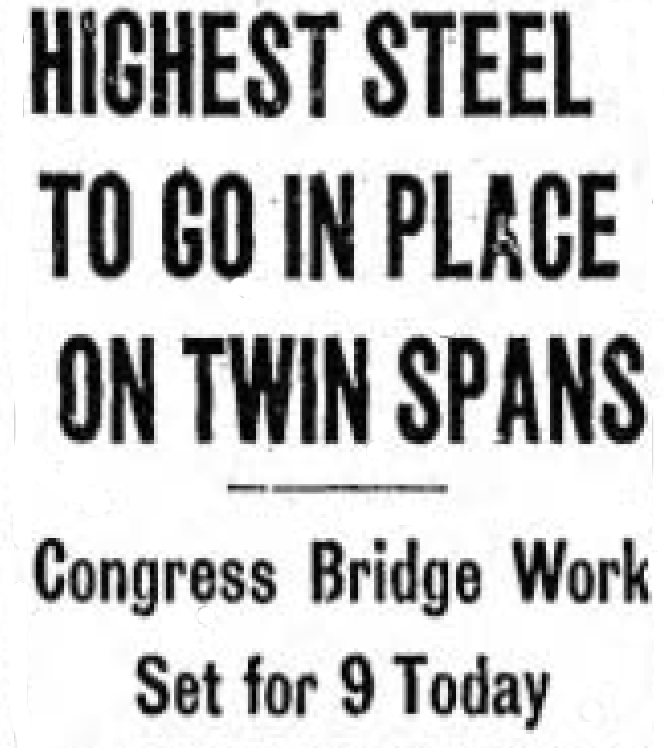 The higbest pleccs of steel on the superstructure of the twin Congress st. bridges over the Chicago river wiJl be put in place in a ceremony at 9 a. m. tomorrow in which Mayor Kennelly and other top clty officials will participate.

An American flag will be raised to the top of the bridge in accordance with a construction custom known as “topping out” the steel.

Cost Will Be 5 Millions
The twin bridges, believed to be the first of their type constructed, will cost 5 million dollars and eventually will carry traflic of the new Congress st. super-highway. They are twin bascule type bridges.

Much construction work will remain to be done after tomorrow’s ceremony. Included in remaining work will be, construction of roadways and sidewalks and installation of counterweights, machinery, and electric wiring.

Completion Due Next Year
The brIdges are scheduled for completion in February, 1955, but will not go into use
then because the roadways ot the super-highway will not be ready. Substructure work was started June 30, 1950, and superstructure work last July 21.

The distance between axles of each bridge is 244.7 feet. The flag will be placed on steel slightly more than 122 feet above the axles. 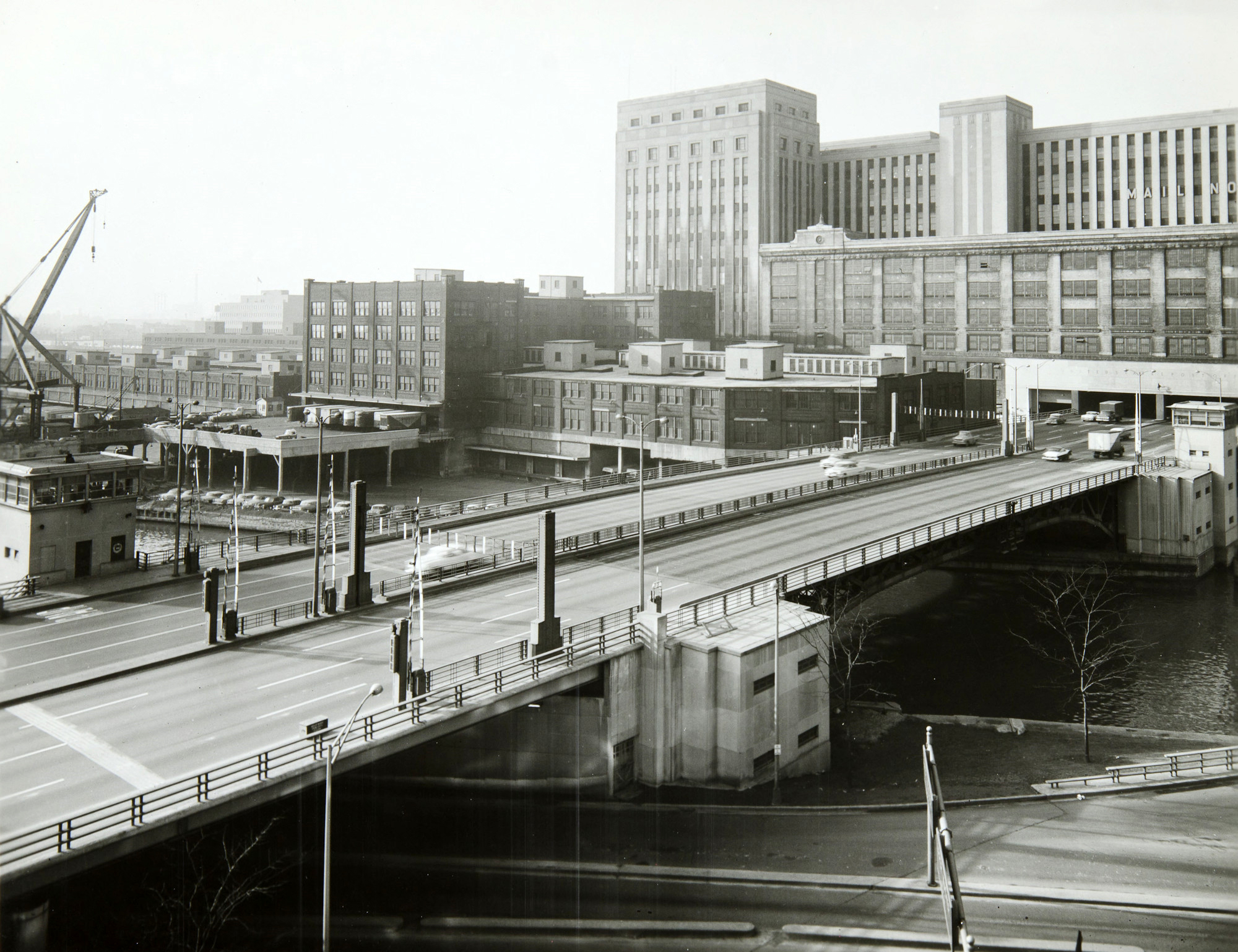 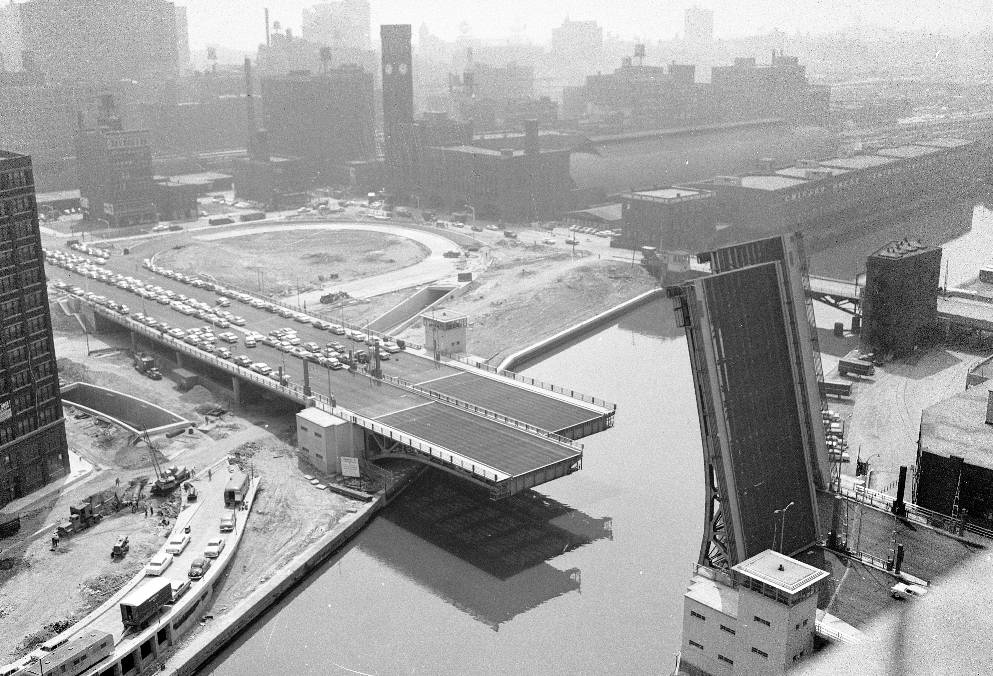 THE EVOLUTION OF CONGRESS STREET

This was from Daniel Burnham’s 1909 plan for a civic center on the west side, with Congress st. leading to it. The proposed center is at Halsted st. near site of the big traffic interchange between Congress expressway and Northwest expressway, now under construction 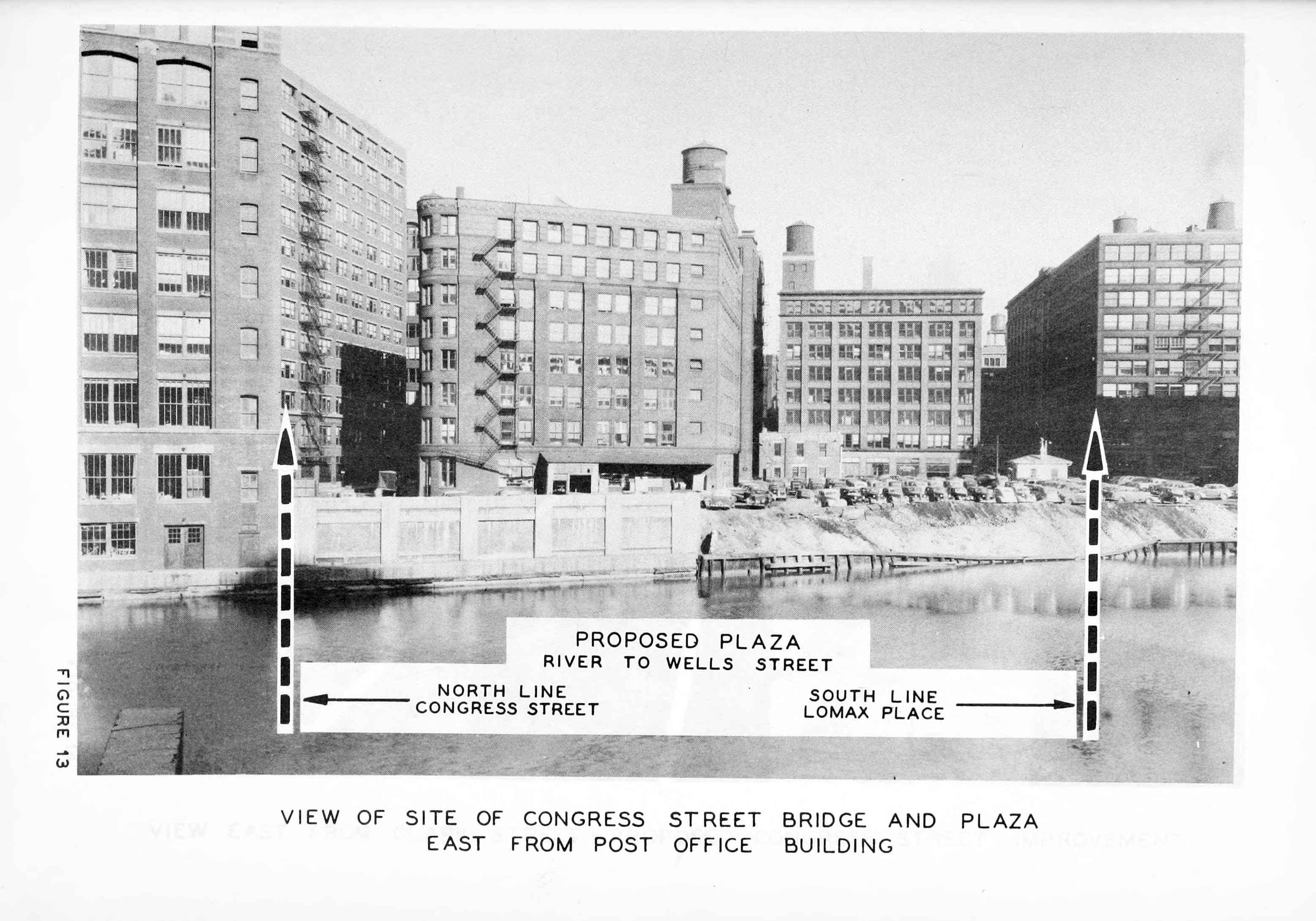 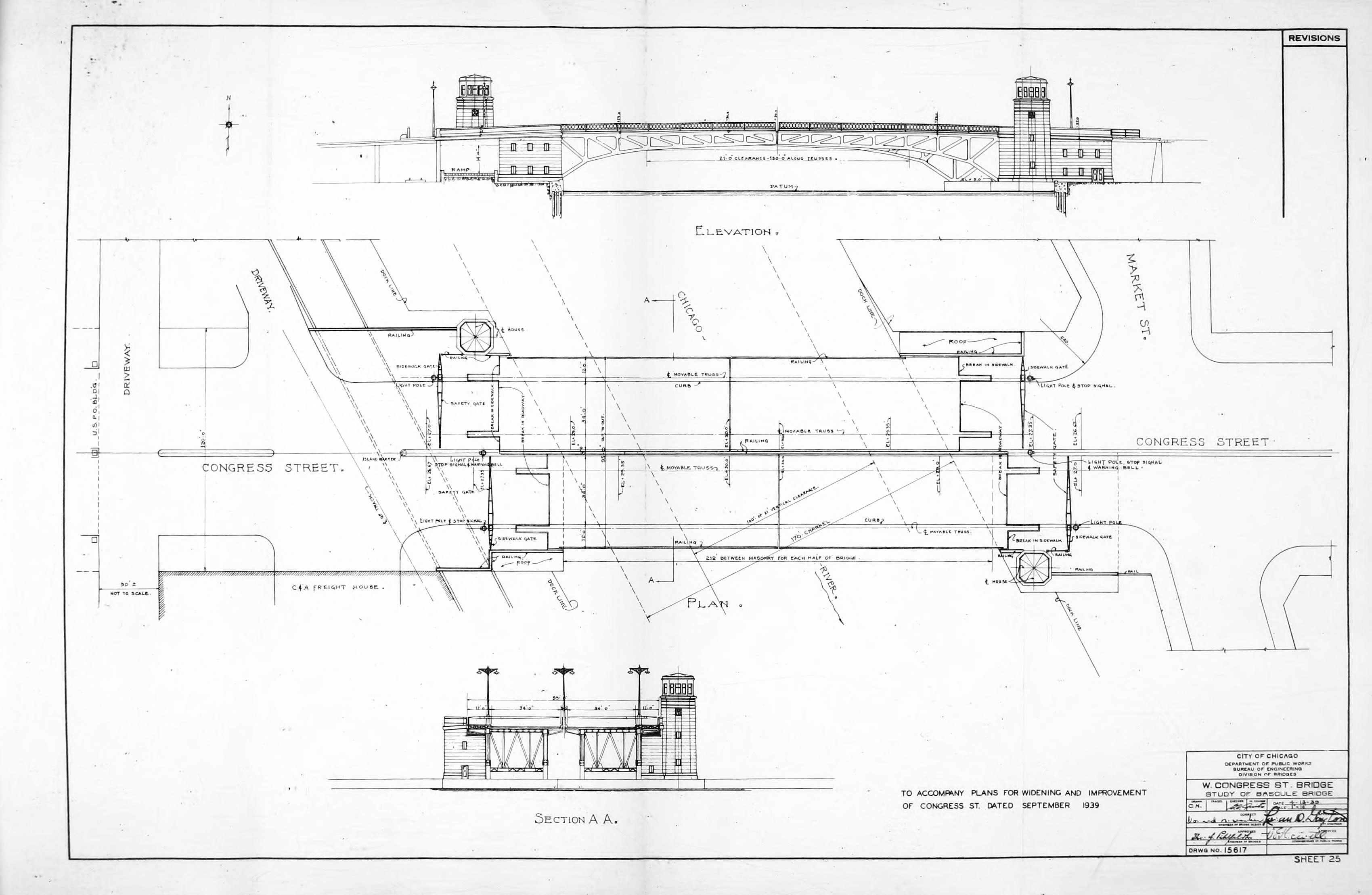 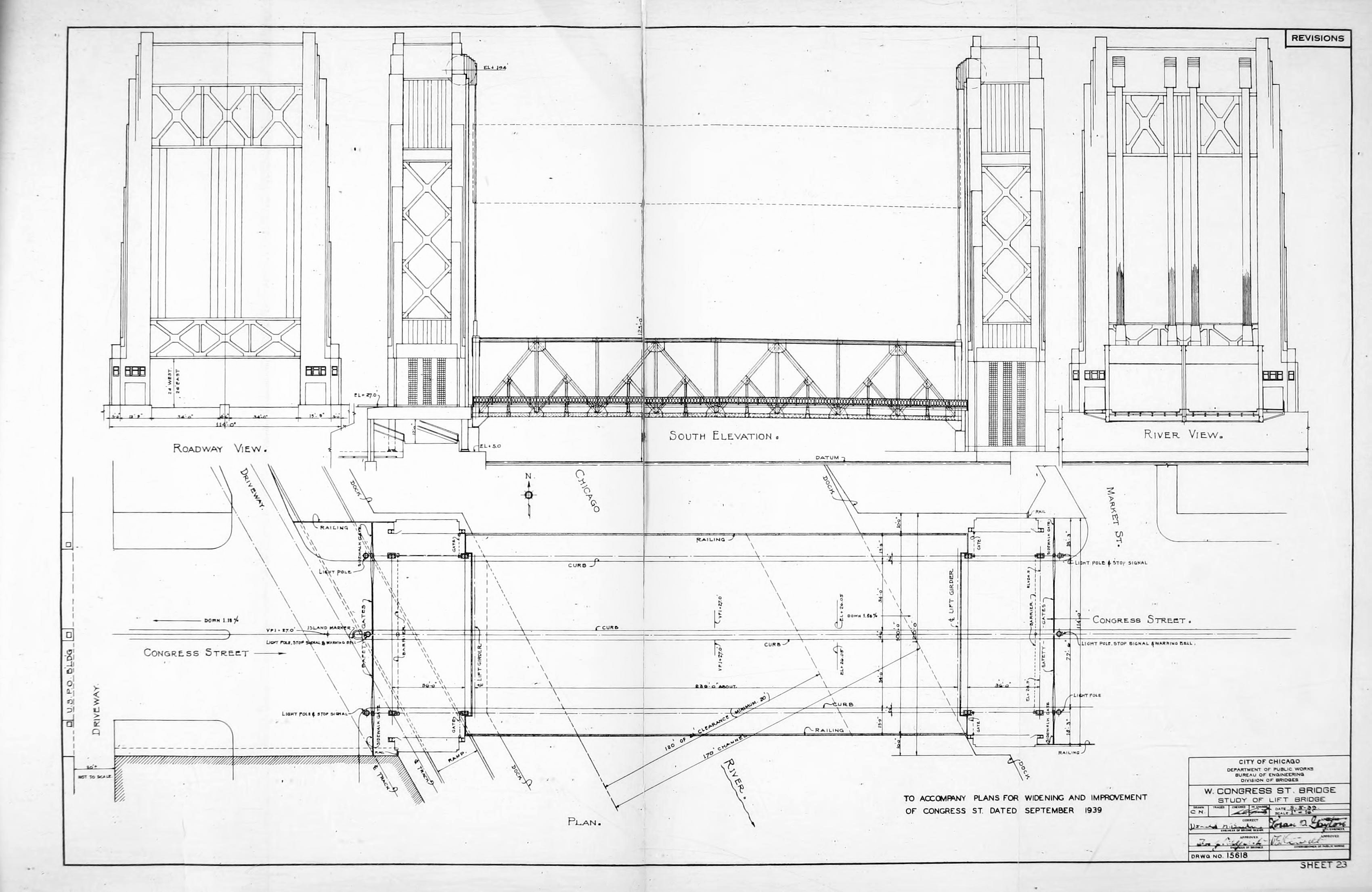 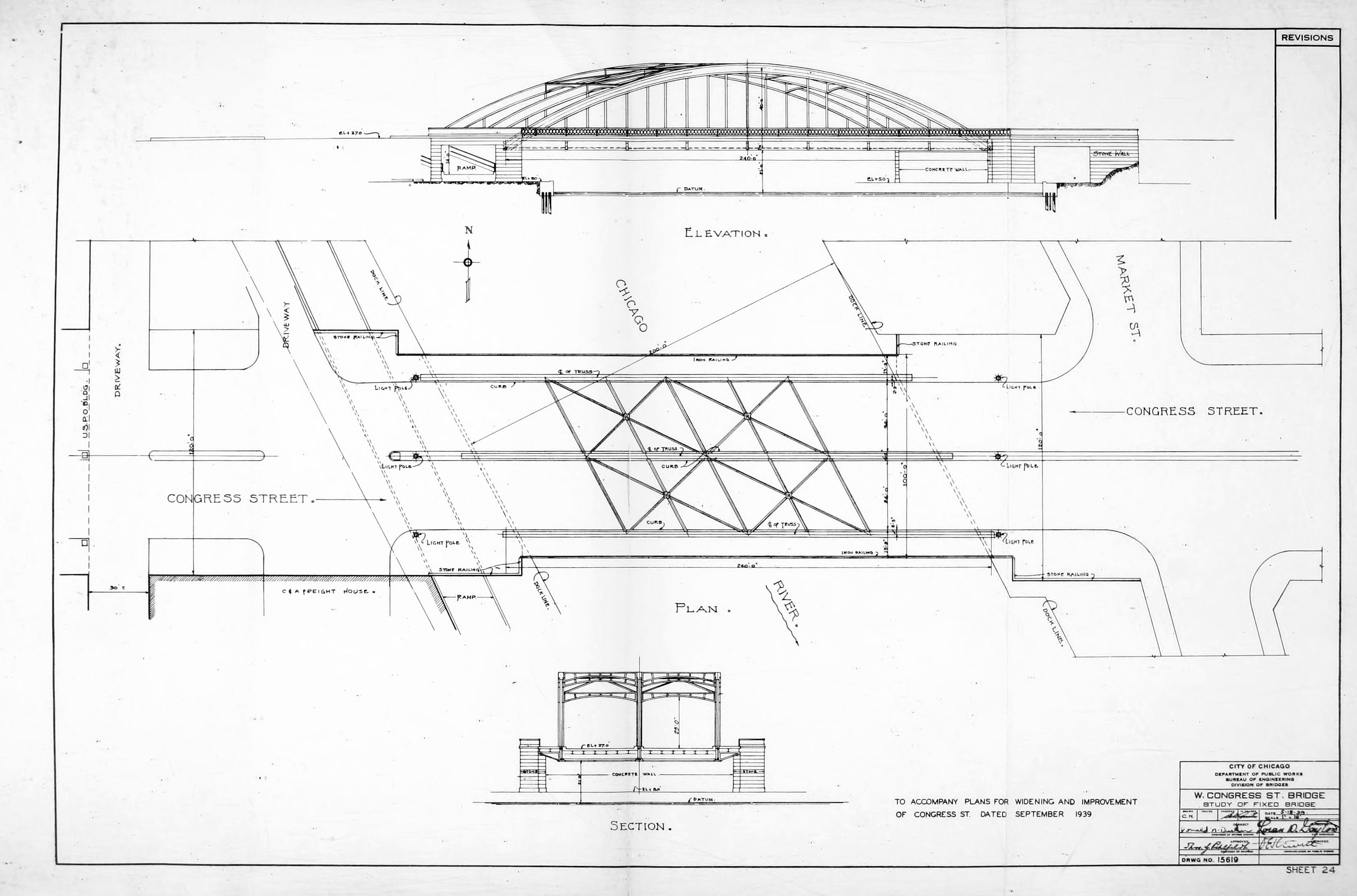