What Prairie Avenue was to the South Side of Chicago, Pine Street was to the North Side. On both sides of Pine Street—now Michigan—in the years after the Chicago Fire stood many fine homes where lived a large group of old and socially prominent families. Among these were the Pooles, Leiters, Ryersons, McCormicks, Trees, Carpenters, Blairs, Medills, and Rumseys. They occupied residences on Pine and other streets adjoining the old Water Tower.—Old Chicago Houses, John Drury, 1976

R. R. Cable’s house, by the same architects (Cobb & Frost), and located at the southwest corner of Cass and Erie streets, is far enough along to show it will be a noble building, one of the finest on the North Side. The material is Casota pink stone from Minnesota, the same stone that is used in the celebrated Washburne residence at Minneapolis. Three stories and basement high, the Cable residence is built of this stone on all four sides, and the stables are stone. The expenditure is some $100,000. The structure has now been raised by Contractors Fox & Howard to the third floor. 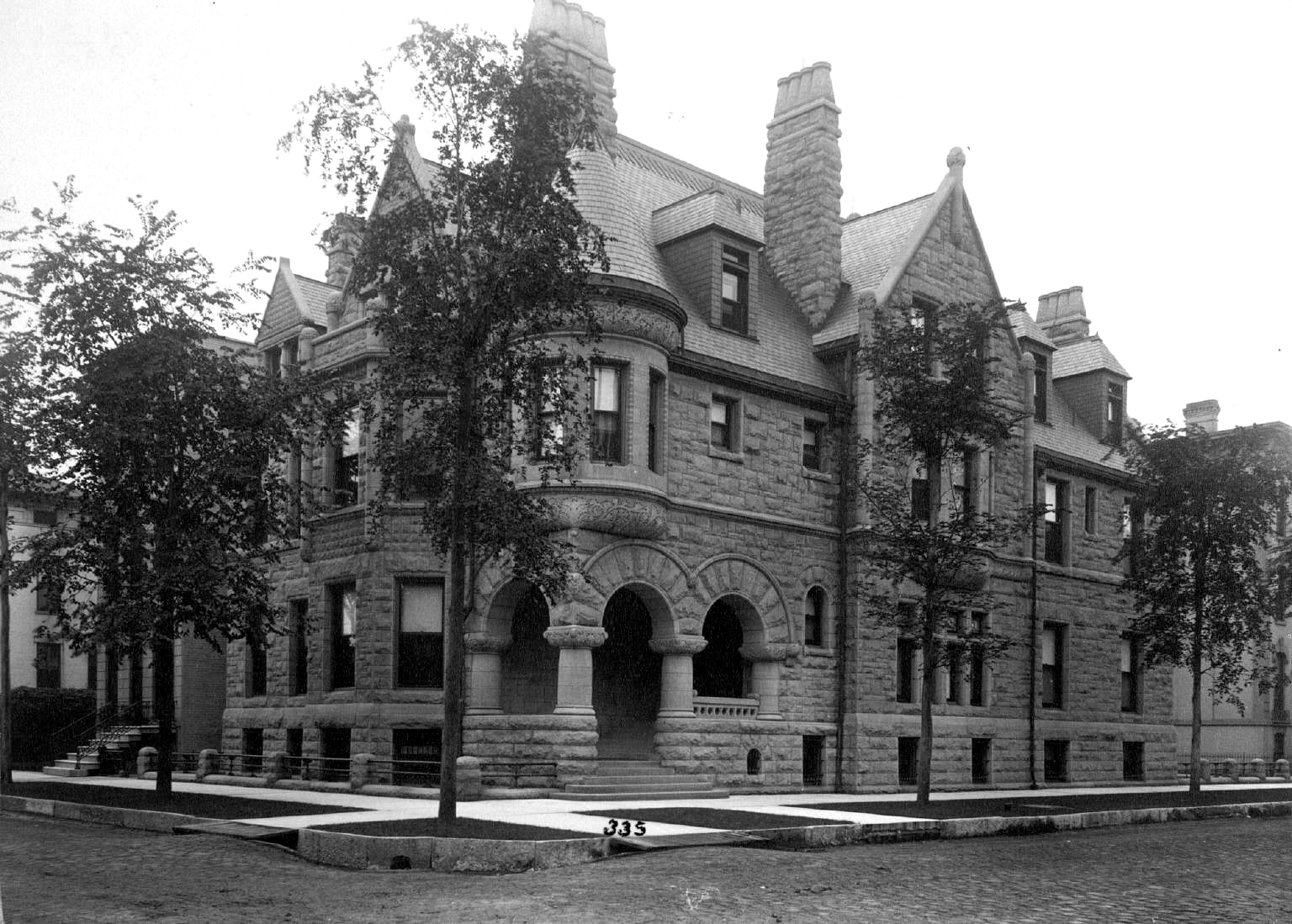 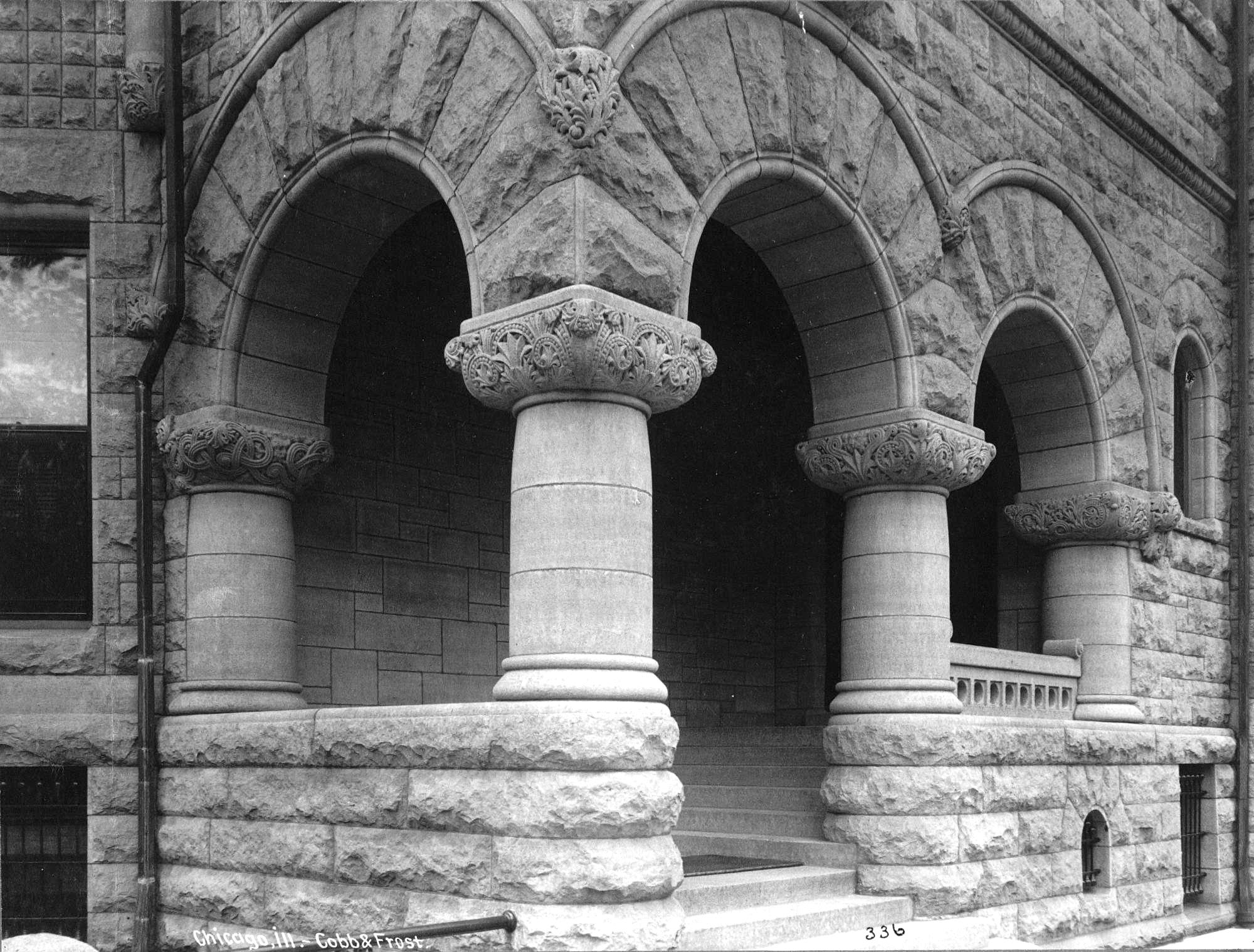 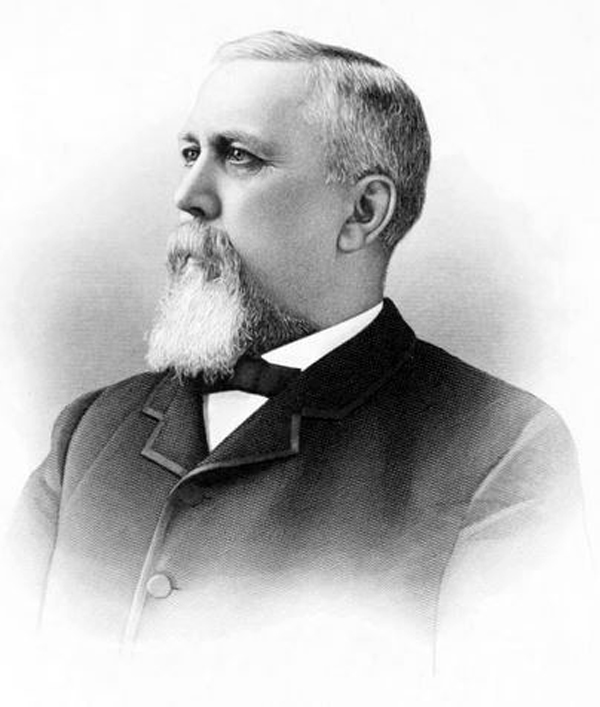 Ransom R. Cable, president of the Chicago, Rock Island & Pacific Railway, was born in Athens County, Ohio, in 1834, the son of Hiram and Rachel (Henry) Cable. During his early life he received but sparse educational advantages, the tuition imparted at the common schools of Athens County being all that he obtained. But a desire for liberal attainments, and a determination to acquire them, united to a rare faculty for study and the retention of the valuable part of the study pursued, matured the intellect of the student, and more than supplied the early want of an imparted course of science and literature. Hence, at the age of seventeen, he is found engaged as a partner in the lumber business, superintending the work in the forests, and actively participating in the general management. These supervisory duties he retained until 1856; and came west, in 1857, to Rock Island, and from thence went to Valley City, nine miles north of Davenport, where he remained as the proprietor of a flouring mill, until 1859. he then became engaged in the coal and railroad business at Rock Island, Ill., and subsequently accepted the position of president of the Rock Island & Peoria Railroad, which he retained until 1880. In connection with these offices, he was also manager of the old Rockford, Rock Island & St. Louis Railroad, for the four years from 1871 until 1874. His extensive railroad experience and manifest capability in the management of railroad business, led to the proffer of the position to Mr. Cable, in 1880, that he now occupies, and which he. in that year, accepted. During 1880, also, Mr. Cable removed to this city, of which he has since been a permanent and valuable resilient, prominent chiefly by his unostentatious perform- ance of all the duties, official, social and political, which have devolved upon him. and becoming honored and esteemed by all with whom those duties have brought him in contact. Mr. Cable was married twice; the second time to Miss Jane Buford, of Rock Island; and has four children. Hiram S., Josephine. Fanny and Benjamin.

Elizabeth S. Cooper has purchased from W. M. Brinkman his residence at the southwest corner of Erie and Cass streets. The consideration has not been given out, but the property has been valued at $60,000. The house, which was built by R. R. Cable, chairman of the Board of Directors of the Rock Island road, is three stories high, with lot dimensions 60×131 feet. Mr. Cable sold it to the late Edward G. Mason. Mrs. Cooper and her husband have given a trust deed on the property to the Chicago Title and Trust company for sale $20,000, one year, at 6 per cent.

The R. R. Cable residence at the southwest corner of Erie and Cass streets, with 131×60 feet of ground, was sold to the Chicago Title and Trust company, as trustee, and Elizabeth S. and Andrew J. Cooper for $100,000.

Record has been made of the sale of the Cable residence at the southwest corner of Erie and Cass streets, with 60×121 feet of ground, to Mrs. Florence E. Hammond for $60,000. The house is a three-story stone structure, with over twenty rooms, and an addition is to be built to it, with the view of running the building as a family hotel.

The old Cable residence, at Cass and Erie streets, which has been the subject of several negotiations during the last two or three years, is to become the home of Robert H. McCormick, who is now serving as assistant state’s attorney without pay.

It has been presented to him by his father, R. Hall McCormick, who has just purchased the property from L. G. Fisher through Mrs. Emma W. Case, for $27,000.

The house is said to have cost R. R. Cable, former president of the Rock Island road, about $110,000. It is built of rose granite, and furnished throughout in red hardwood, and occupies a lot 60×130 feet. 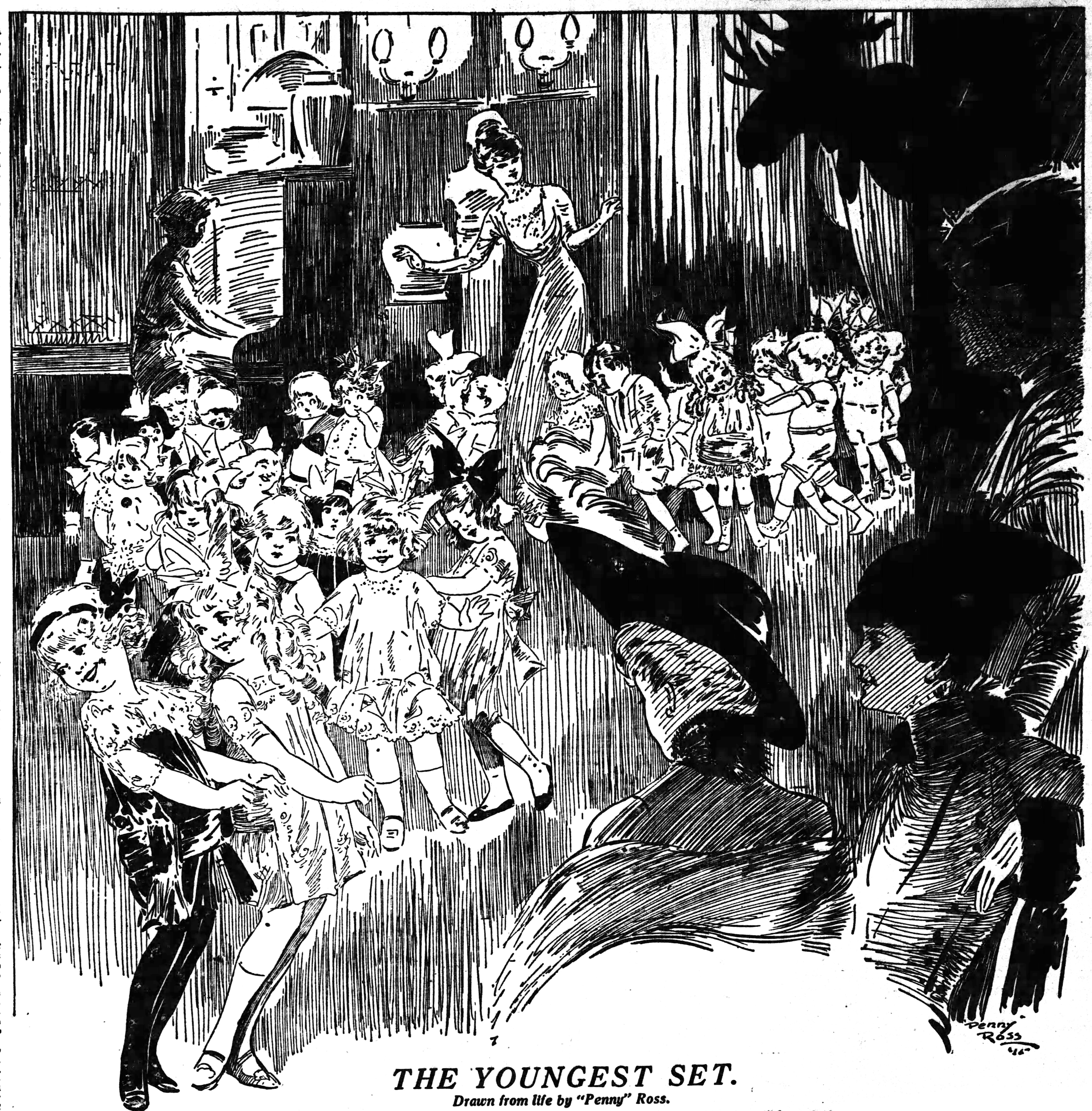 This is the latest society set. And it is learning to dance. The members do not meet in the ballroom—just yet. For a while they will be content to gather at the homes of the various members of the set and there seek to master the newest steps. Almost any step might seem new to them. In truth it has not been many years since they learned the first step at all, but they are beginning to get ready for the accomplishments which within a few years will brand their popularity in society circles. For this latest set Mrs. Robert H. McCormick has thrown open her home at 25 East Erie street, and the few more than two dozen members bear names that are known to most Chicagoans. They are Betty Johnson, Ellen Borden, Betty Borden, Louise Brewer, Marlon Moore, Martha Dickinson, Florence Crane, Laura Sprague, Barbara King, Cynthia Wilson, Eleanor McCormick, Rosemary Morrison, Bertha Palmer, Martha Havemeyer, Potter Palmer III, Arthur Orr, Phelps Dunham, Howard Lyon, John Barnes, Gordon Kelley, William Dickinson, Parmelee Lyon, Cyrus Adams III, Watson Armour, Frederick Rowson, Harold Smith, and Frederick McLaughlin. In age this dancing group ranges from 4 to 6 years. They are learning under the eyes of a committee which includes Mrs. A. A. Sprague II,. Mrs. Potter Palmer Jr., Mrs. Robert H. McCormick, and Mrs. Hugh Johnston.

The former residence of Robert Hall McCormick at the southwest corner of North Wabash avenue (formerly Cass street) and Erie street, was sold yesterday to Eugene J. and John J. Carroll of John Carroll Sons, undertakers, for $43,000. It will be remodeled and used by the buyer as a funeral home to replace the present undertaking establishment at 1158 North Clark street. It was said that $30,000 will be spent rebuilding the old residence from plans by Albert A. Schwartz, architect. Daniel Murphy was broker in the purchase.

Women and men wept as the horse-drawn hearse crept down Michigan Avenue. It was 1865, and President Abraham Lincoln was dead. John Carroll, one of Chicago’s first undertakers, steered the carriage while a city and a nation mourned.

Seventy-four years later, Chicago again was stunned by the passing of a great man—George Cardinal Mundelein. This time the line of mourners strectched for 35 miles, silently watching as the prelate’s coffin passed by. Again it was a Carroll-organized burial arrangement.

Since 1851, John Carroll Sons, now at fort 25 E. Erie St., has buried Chicago’s most famous men and women as well as hundreds of its unsung whose names never appeared in print.

“We’ve been doing business for families for generation after generation,” said Eugene J. Carroll, who at 81 still manages the family business with his brother, John. “We’ve buried a president, three cardinals and dozens of mayors and members of the clergy.”

For three generations, John Carroll Sons has buried the city’s powerful and weak. including hundreds of orphans whose burials were donated. While C. D. Peacock Co.—founded in 1837—closed temporarily during the Great Chicago Fire in 1871, the Carroll mortuary remained open, making it the oldest continuous business in Chicago.

The Carroll name and reputation began when John Carroll, an Irish emigrant who worked as a coachman and teamster, opened one of the city’s first funeral parlors with P. A. Birren in 1851.

In those days, Chicago was bordered by Chicago Avenue on the north, 12th Street on the south and Halsted Street on the west. Families took their dead directly from their home to the cemeteries on the outskirts of town. It was natural for John Carroll with his teams and wagons to assist in the burials.

“He was one of the first (funeral businesses) to have embalming,” Eugene Carroll said. “We also were the ones who first brought funerals into chapels.”

Before that mourning families traditionally held services in their own homes. But when Carroll opened its chapel on Superior and Wells Streets friends and families could pay their last respects without burdening the immediate family.

When Lincoln was assassinated in 1865, government officials asked John Carroll Sons, one of the funeral businesses in Chicago at the time, to organize Lincoln’s burial and funeral procession in Illinois, John Carroll drove the four black horses that carried Lincoln’s bier while passersby wept. At preplanned intervals, Carroll stopped for ice along the long April journey to preserve the body. 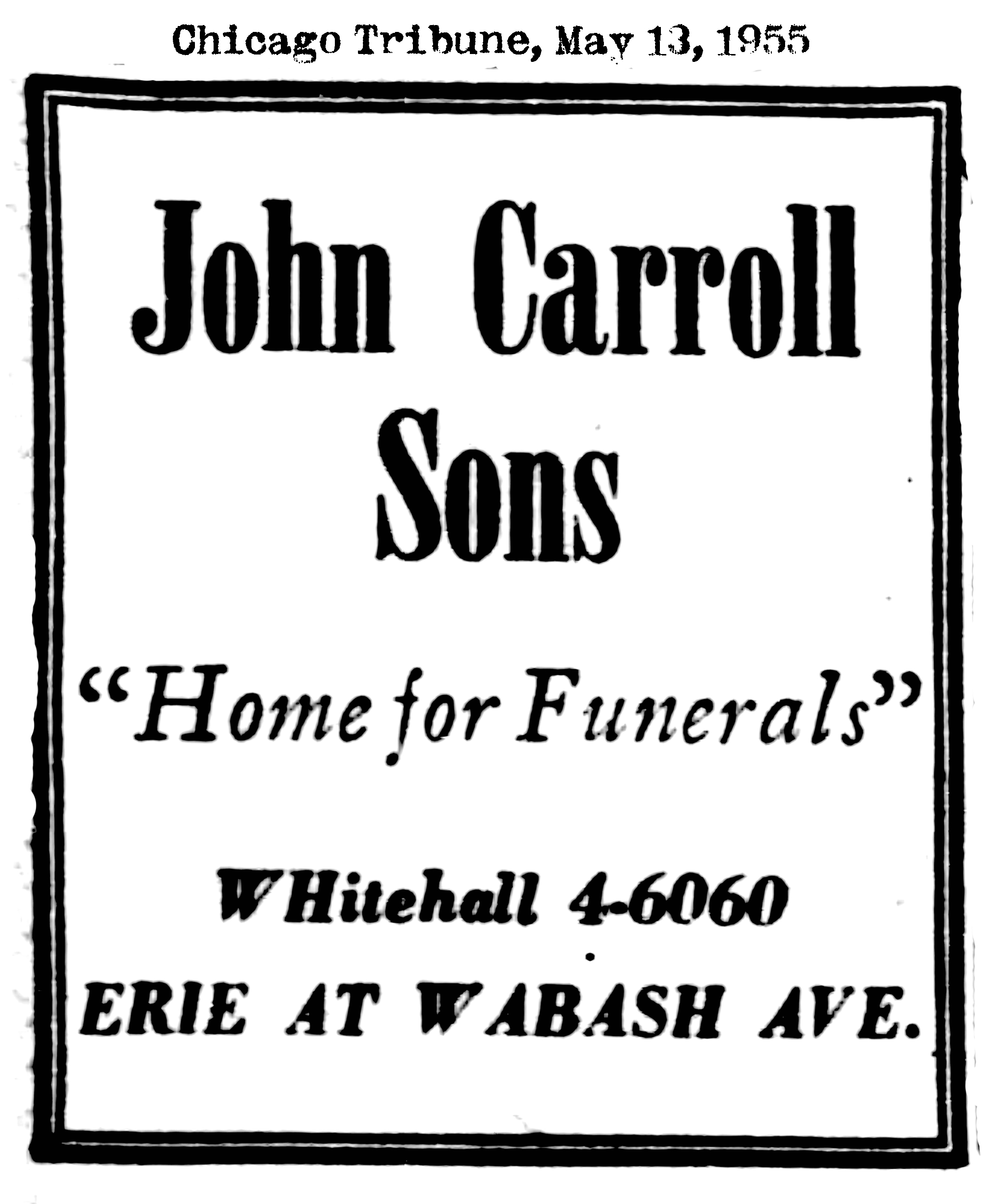 John Carroll died in 1905 at age 85, but the Carroll tradition continued, with chapels opening at Chestnut and Clark Streets, Diversey Parkway and Clark Street and on west Ravenswood Avenue.

Back then a complete burial package cost $9, Eugene Carroll said. Today it costs $525 just to open the grave.

Through changes in price, procedures and caskets, the Carroll name continued, serving generations of Palmers, Fields, Swifts and others. But, Eugene Carroll said, perhaps the most memorable burial was that of Cardinal Mundelein in 1939.

People of all races and religions mourned when the prelate died unexpectedly of a heart attack at age 67. More than a million Chicago residents as well as hundreds of dignitaries attended the funeral.

“It was on the radio and in the movies.” Eugene Carroll, who directed the funeral arrangements. “And everything had to be coordinated with the police.”

While a John Carroll Sons parlor even opened for several years in New York, today only the chapel at Erie Street and Wabash Avenue is in operation. The large, granite structure built by Ransom Cable as a home sits boldly amongst towering skyscrapers as a reminder of the past. It has marble fireplace, hardwood floors and a stately staircase.

“I’ve dealt with a lot of family,” Eugene Carroll said. “In this business you get to know them well, perhaps even better than their doctor or lawyer.” 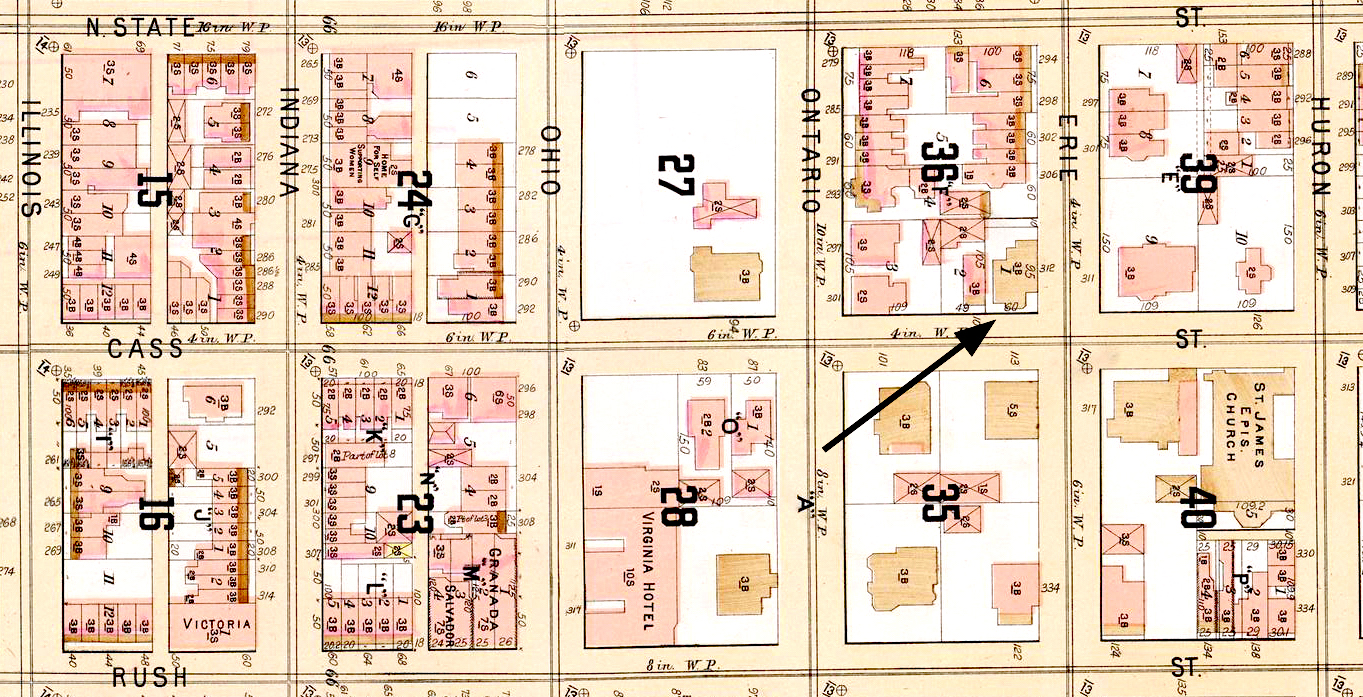 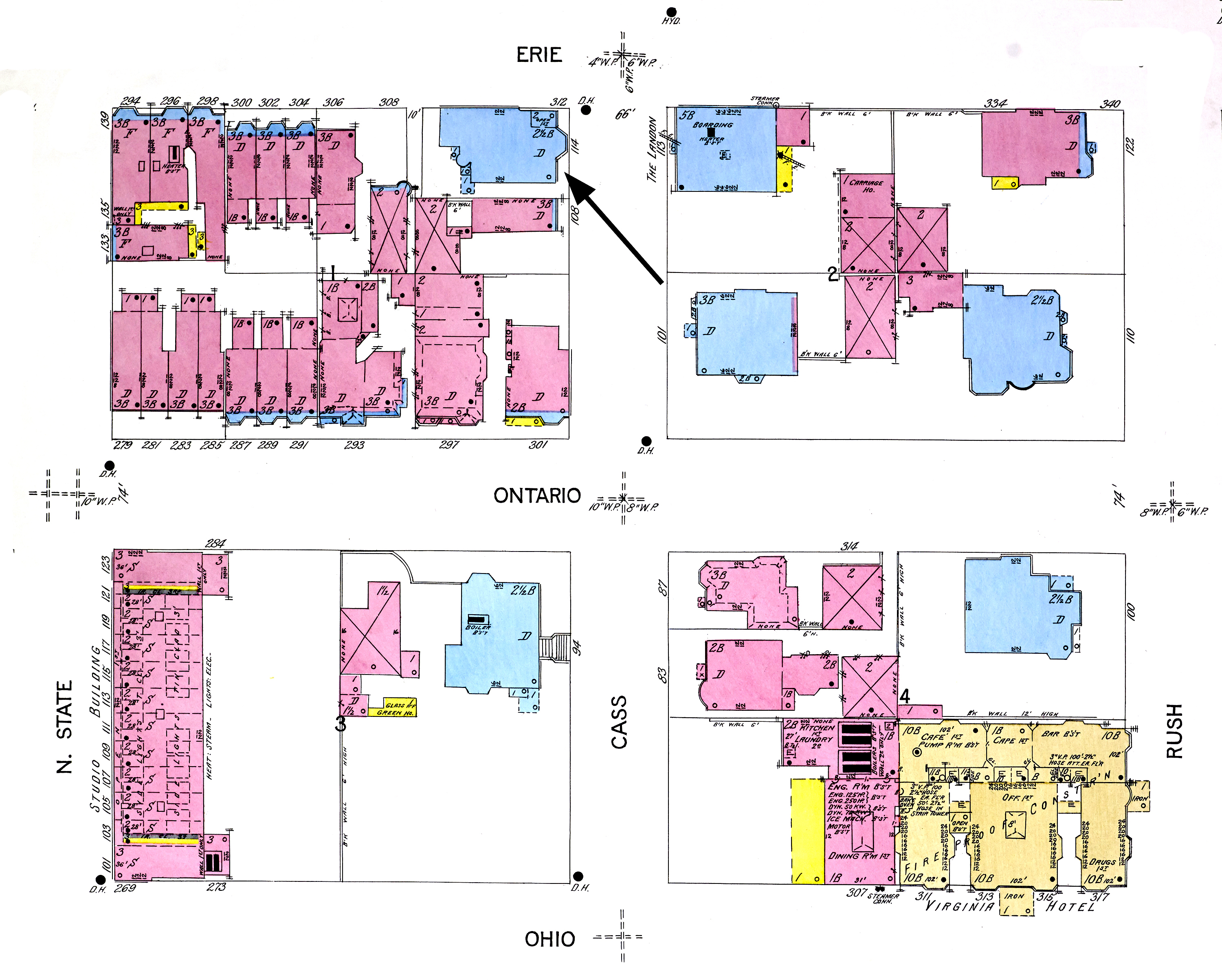