Almost contemporary with the House of Peacock and the City of Chicago was Charles Daniel Peacock, who was born on October 10, 1838, one year after Chicago had been incorporated as a city, and Elijah Peacock, his father, having left his paternal home in England, had opened an establishment here as jeweler and watch repairer, his ancestral vocation, as it were. The father, the grandfather and the great grandfather of Charles Daniel Peacock were jewelers; and so it is hardly surprising that it was in the jewelry business that he himself entered. 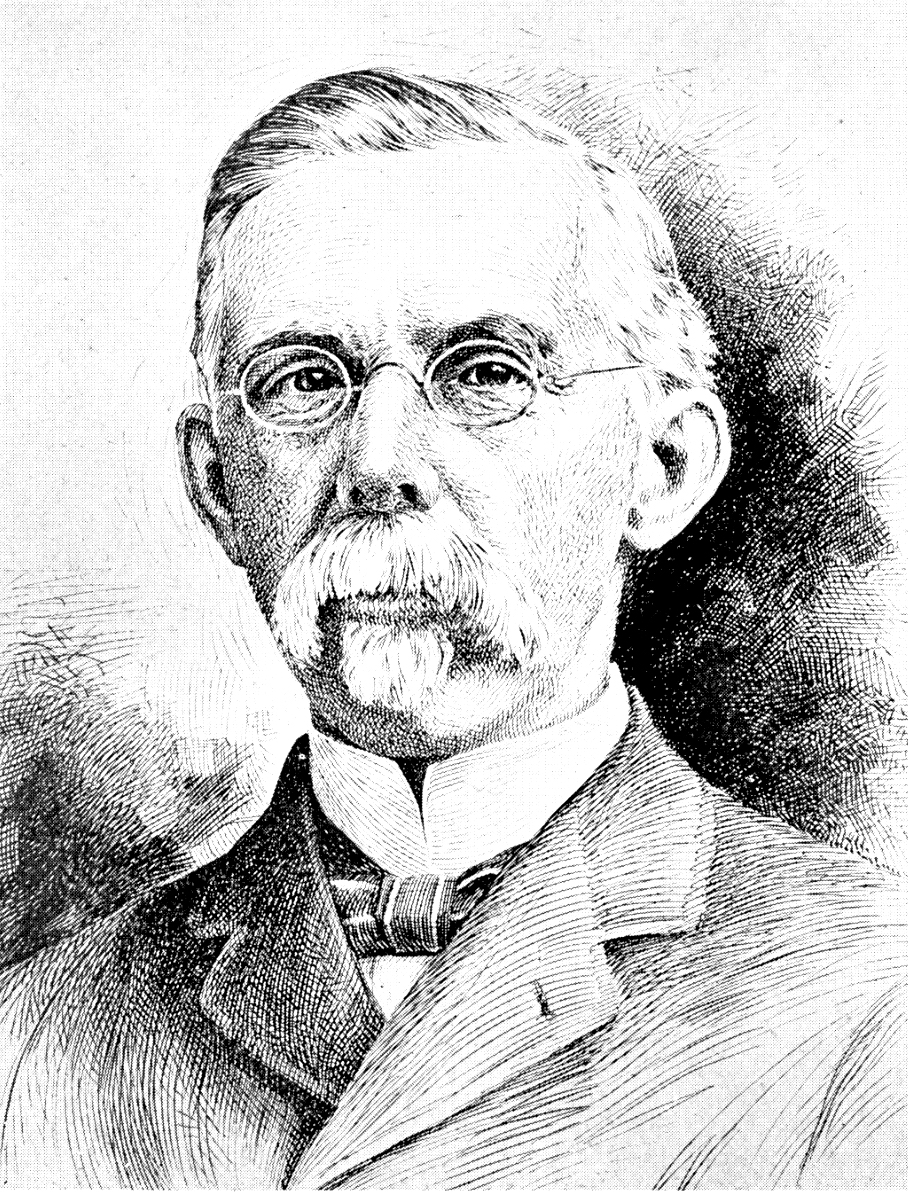 His mother was Rebecka Haylock Peacock. His early education was obtained in the Bennett Grammar School on the corner of Madison Street and Vincennes Road (now State St.) . Looking back one is intrigued by the thought that C. D. Peacock was learning the three R’s in a quiet little school-house on the same spot that is today the busiest corner in the world. And that one scant block south is located the noted establishment which bears his name, in the new edifice whither it had moved a quarter of a century after Mr. Peacock’s death. Descended from a line of jewelers who took pride in their craft Charles Daniel Peacock was destined almost from birth to be, himself, a jeweler. Tradition and training are powerful factors in shaping the choice of one’s life work. When Charles Daniel Peacock entered his father’s store in the 200 block on West Randolph Street, therefore, he was running true to form. Here he had the opportunity of meeting and talking with the leaders of the city, practically all of whem were patrons of the store. Men like Judge Knickerbocker, Eugene S. Pike, (Long) John Wentworth, Arthur Dixon : and the elder Carter H. Harrison became his acquaintances-and later his patrons.

In those days gentlemen of substance with their elaborate shirt studs and ladies of fashion with their brooches and ear-rings require( the services of jewelers of nice discrimination. And it was at Peacock’s that they were wont to seek out their needs.

Of course C. D. Peacock succeeded his father as head of the establishment. An old picture shows a view of the Peacock Store. On the front of the building is a sign with the legend “Watches C. D. Peacock, Jeweler.” Of course the premises at 221 West Randolph Street were devastated by the holocaust of ’71. Yet standing amidst the ruins of all else stood the jewelry vault of Peacock’s.

Recovery was rapid. The location of the business was quickly changed to Madison Street and it is said that while the city was still blanketed by a haze of smoke the firm was extracting fine ash dirt from the mechanism of Chicago’s timepieces. By 1873 Peacock’s was firmly established on the north-west corner of State and Washington Streets. The period of reconstruction was fraught with opportunities for this flourishing firm, and Charles Peacock was not slow to grasp them. The pomp and brilliance of the city’s social functions was naturally not without an accompaniment of fine silver and exquisite jewelry. Peacock’s as the foremost house for this character of merchandise was usually called upon by the elite. 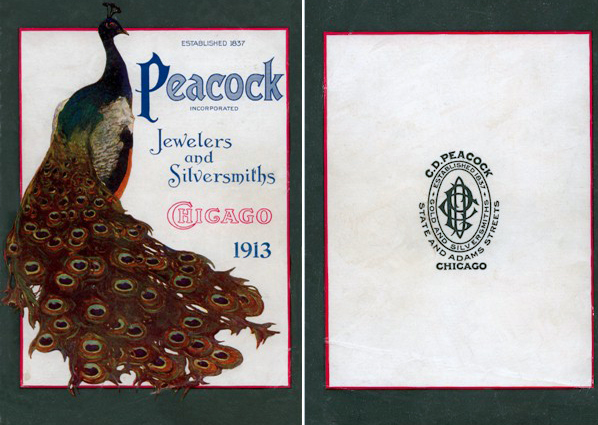 Mr. Peacock was married to Miss Mary Ann Smith, a native of Montreal. They had six children: Marion, Ella, Birdie, Charles, Robert and Walter. Mr. Peacock attended the Presbyterian Church and voted for the man rather than the party. He was fond of hunting and fishing, belonging to the Tolleston Gun Club, the Washington Park Club, the Calumet Club and the Chicago Athletic Club. For one term he served as Alderman in the first ward.

When Charles DaNiel Peacock died in 1903, passing on to his sons what ·he had inh.erited from his father, it was the end of a long and useful career as a Maker of Chicago. An outstanding merchant of the old school who believed in incessantly developing, changing and improving. 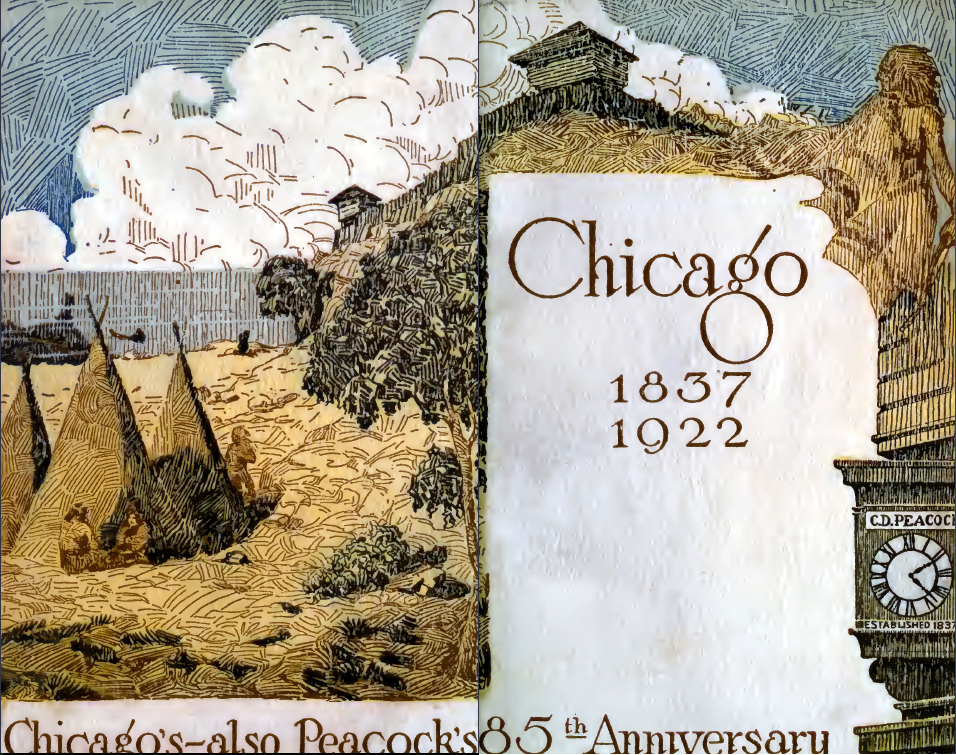 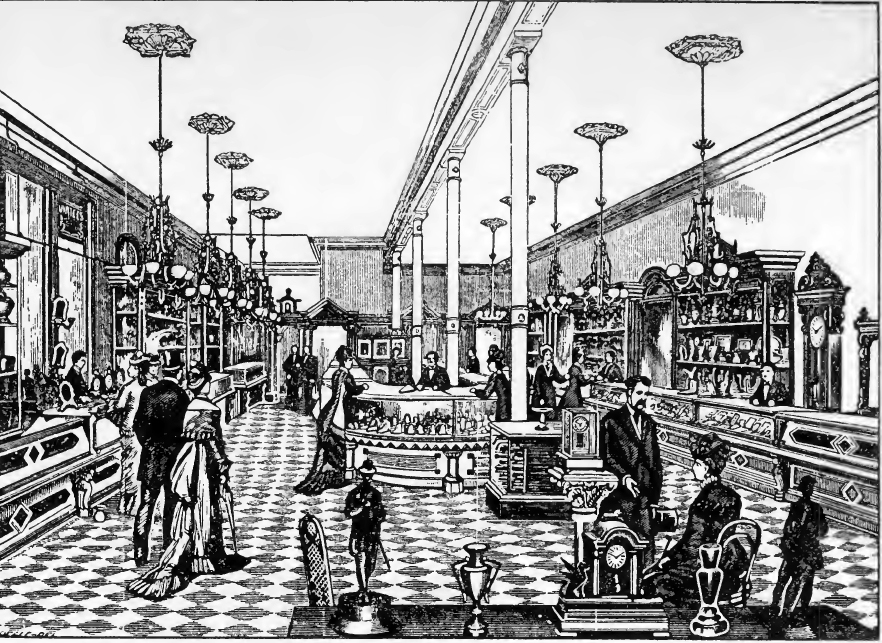 The jeweler, which has operated under bankruptcy protection since April, closed four stores at the time of the bankruptcy filing. It has lost the leases on its three remaining stores and will continue only if new locations can be found, said Robert Sager, president of Gordon Brothers, a Boston-based liquidation specialist that bought Peacock`s inventory assets last week. Gordon Brothers also operates a wholesale jewelry business.

Peacock`s prime location in Chicago Place, 700 N. Michigan Ave., will be taken over by Talbots Inc., a specialty retailer and cataloger of women`s classic apparel.

Talbots will convert the two-story Peacock space into a regional flagship store, according to Monet LeMon, a company spokeswoman. The Talbots store in Water Tower Place, less than two blocks north of Chicago Place, will remain open, she said.

For Peacock, the future looks bleak.

”We have an interest in continuing Peacock`s going forward,” said Robert Sager, president of Gordon Brothers. ”Peacock`s is everything to Chicago that Tiffany`s is to New York.”

But without any viable locations that can continue to operate after the first of the year, Sager acknowledged the jeweler`s immediate future is virtually sealed. He said Peacock has 50 employees.

Founded in 1837 as the ”House of Peacock,” it is the latest casualty of the nation`s long-running recession, which earlier this year claimed the Homer Brothers and Colby`s furniture stores, both of which dated to the turn of the century.

The jeweler was run by four generations of Peacocks until 1969, when Dayton-Hudson Corp. bought the stores. Dayton-Hudson is the parent of Marshall Field`s.

In 1982 Dayton-Hudson sold its jewelry-store division, which included Peacock, to Henry Birks and Sons Ltd. of Montreal.

A retailer close to the jeweler, however, said the recession was only part of the firm`s problems.

”The reason it has done so poorly is just poor management,” he said.

”They thought they could run the operation from Canada.”

While the Peacock family may have sold the stores in 1969, it didn`t get out of the jewelry business. Today Stuart Peacock, a descendant of founder Elijah Peacock, operates a jewelry gallery named Stuart G. Peacock Ltd. The store, at 645 N. Michigan, overlooks the Peacock store in Chicago Place.

Back when Elijah Peacock started his jewelry business, Chicago had 4,000 residents. As Chicago grew, so did Peacock, moving to larger locations more than a half dozen times as the city`s business district prospered.

Peacock sold jewelry to women, repaired watches for men and adjusted chronometers of Lake Michigan boat captains until his death in 1889, when his son, Charles Daniel Peacock, took over and changed the name to C.D. Peacock.

The company celebrated the Columbian Exposition in 1893 by publishing a mail-order catalog for the jewelry and gift items it stocked, the first time a catalog featured strictly luxury items. In 1927 the firm moved into the Palmer House Hotel.

Peacock joined the move to the suburbs in the 1950s, opening stores in La Grange Park in 1952 and Hubbard Woods in 1955. Peacock opened outlets at Old Orchard Shopping Center in Skokie in 1957 and Oakbrook Center in Oak Brook in 1962.

The chain`s store at Chicago Place caused a mild tempest when officials of Birk`s without explanation dropped the Peacock name shortly before the store`s opening. And the firm`s peacock insignia was omitted from the clock hung from the Chicago Place facade. But protests from Chicagoans forced Birk`s to return the peacock to its perch and to rename the store.

At the time of the purchase by Gordon Brothers, Peacock was a shell of what it once had been. Its Palmer House flagship had been closed in April, along with other locations.

The three remaining stores, at Michigan Avenue, Oakbrook Center and Northbrook Court, were lightly stocked, even heading into the most important selling period of the year.

”This is going to take somebody with deep pockets to reinvigorate this company,” said Sager, saying his firm has the deep pockets and experience to turn Peacock around.

Gordon`s wholesale jewelry business, which accounts for 50 percent of the firm`s revenue, could serve as the core of a revitalized Peacock.

”Our feeling is there could be some vertical-integration features between the wholesale business and Peacock,” he said. ”One of the things we could do differently is supply the stores better.”

But Sager`s hope for reopening Peacock is dependent on finding suitable locations. One such spot is the Palmer House.

”I`ve been talking to the Palmer House to see if we could get something worked out,” said Sager, noting that Peacock, if it continues, must have a downtown store.