One of the great advantages incident to the new system of hanging the walls to the steel framework is seen by reference to the cut of the Unity Building, fig. 1. There was delay in the delivery of the granite facing for the first three stories, above which the facing is to be of a yellow-buff pressed brick. The non-delivery of material in no way hindered the contractors in finishing the frame work or upper wall. They commenced the erection of the brick wall at the fourth story, and completed some six or eight stories of wall before the lower facing arrived. The iron framework has been carried up four stories farther than shown in the cut, making 17 stories in all.

The Frame.—The wall for each floor rests upon the bottom flange of the outside floor girder (or upon angles riveted to this) and is bound in to the posts by means of bent rods about three-eighths of an inch in diameter. These rods are bent at one end into holes, which are put into the bricks when manufactured, the other end being bent around an angle of the post, so that every fourth or fifth course of brick is securely bound in. The thickness of these brick walls is usually either 4 or 8 in., having a tile backing, except where a fire wall is desired, in which case it may be made either 16 or 20 in., and for the same protection against heat would remain of the same thickness from the top story to the basement.

Not only is the use of cast iron to be deprecated fromthe danger of blowholes, but also because the fastening with bolts is unmechanical for this class of structure. Where steel is used hot riveting is the rule, and all connections may be made tight and permanent with a minimum liability to looseness. This is of paramount importance in a structure which cannot be inspected from time to time. No engineer considers a bolt connection for bridges as proper when it is possible to use rivets, and as cast iron has been practically abandoned for bridges, it should, probably, for the same reasons, be given up for tall buildings where tension and bending moments are to be resisted. Where bolts are used with steel columns the holes are punched, then reamed 1/16 in. and the bolts are turned to fit. Some of these structures have a 100 ft. square base and are 200 ft. high. 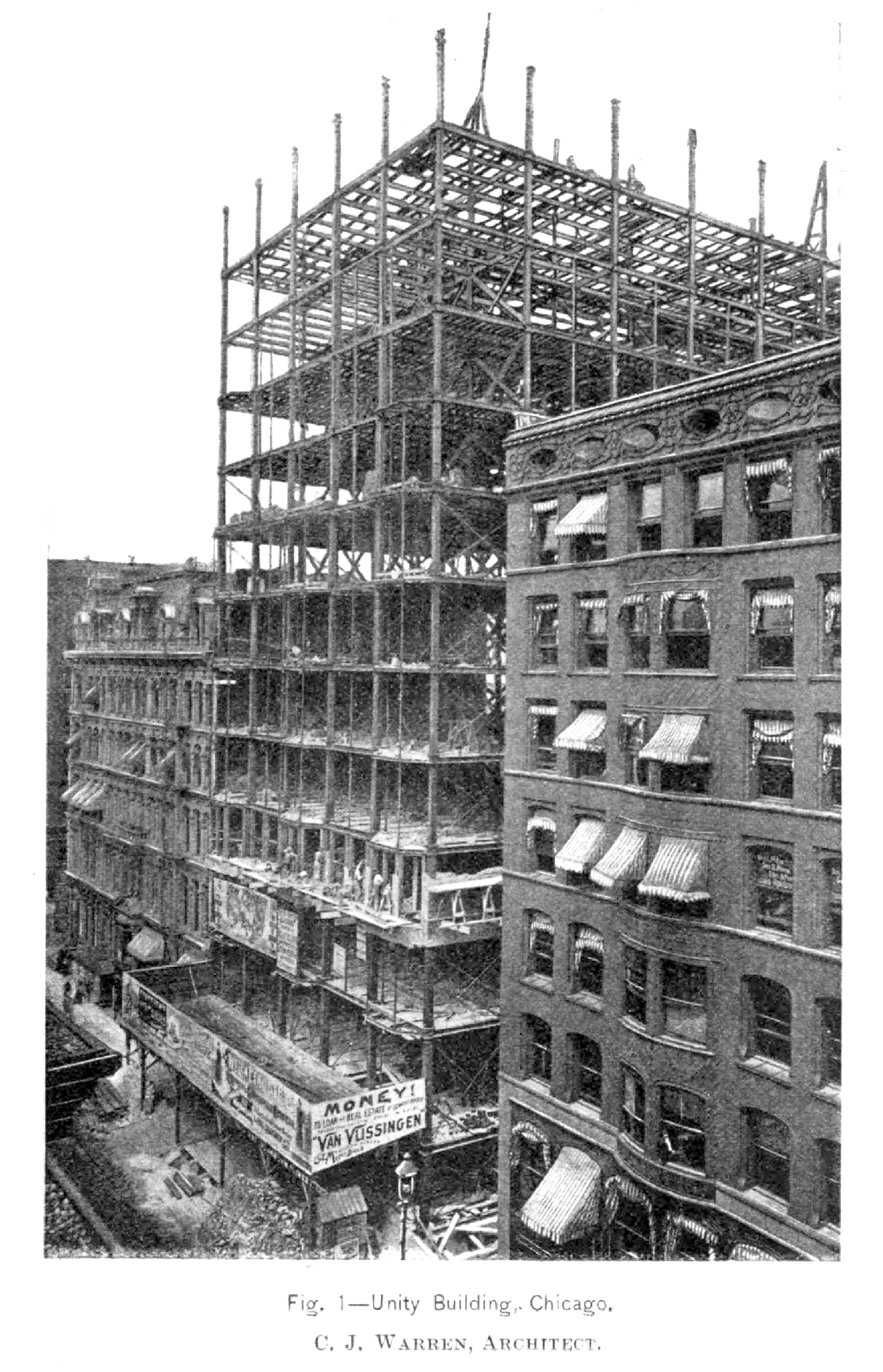 The Unity Building is a model of the latest ideals in office building architecture. It stands upon the site of the old Unity Building (Union College of Law), erected soon after the fire. Nothing could present a greater contrast between the new and the old—between the ideas of twenty years ago, and those prevailing now—than this magnificent structure. Every convenience that modern invention has made possible, and every improvement by way of decoration seems to be summed up in this elegant edifice. The entrance hall is a consummate work of art. The outer entrance or foyer is of rich brown Numidian marble, trimmed with mouldings of Alps green. The inner hall is fin- ished entirely in Italian marble, trinmied with Cham- plain marble. An encircling balcony on the level of the second floor is surrounded with a heavy balustrade of the same costly material, and the heads of the marble column which support the ceiling are richly carved. The floor of this hall and of every corridor up to the last of the sixteen stories is mosaic of the most elaborate design. The ceiling of the entrance corridor is covered with rich plastic work, the prevailing design being that of large, full-blown roses, finished in gilding. The gold leaf on this ceiling alone cost more than $2,000. The electric lights for the building are furnished by a private electric plant of 2,000 sixteen candle-power lamps. The elevator cars, and the lattice work surrounding them, are of bronze, heavily plated with silver. The stair cases are of steel, with marble treads to the top; in fact, the i6th story is fitted as elegantly and carefully as the first. The building is heated by steam, provided with perfect ventilation, six high-speed passenger, and one freight elevators, mail chutes, etc. 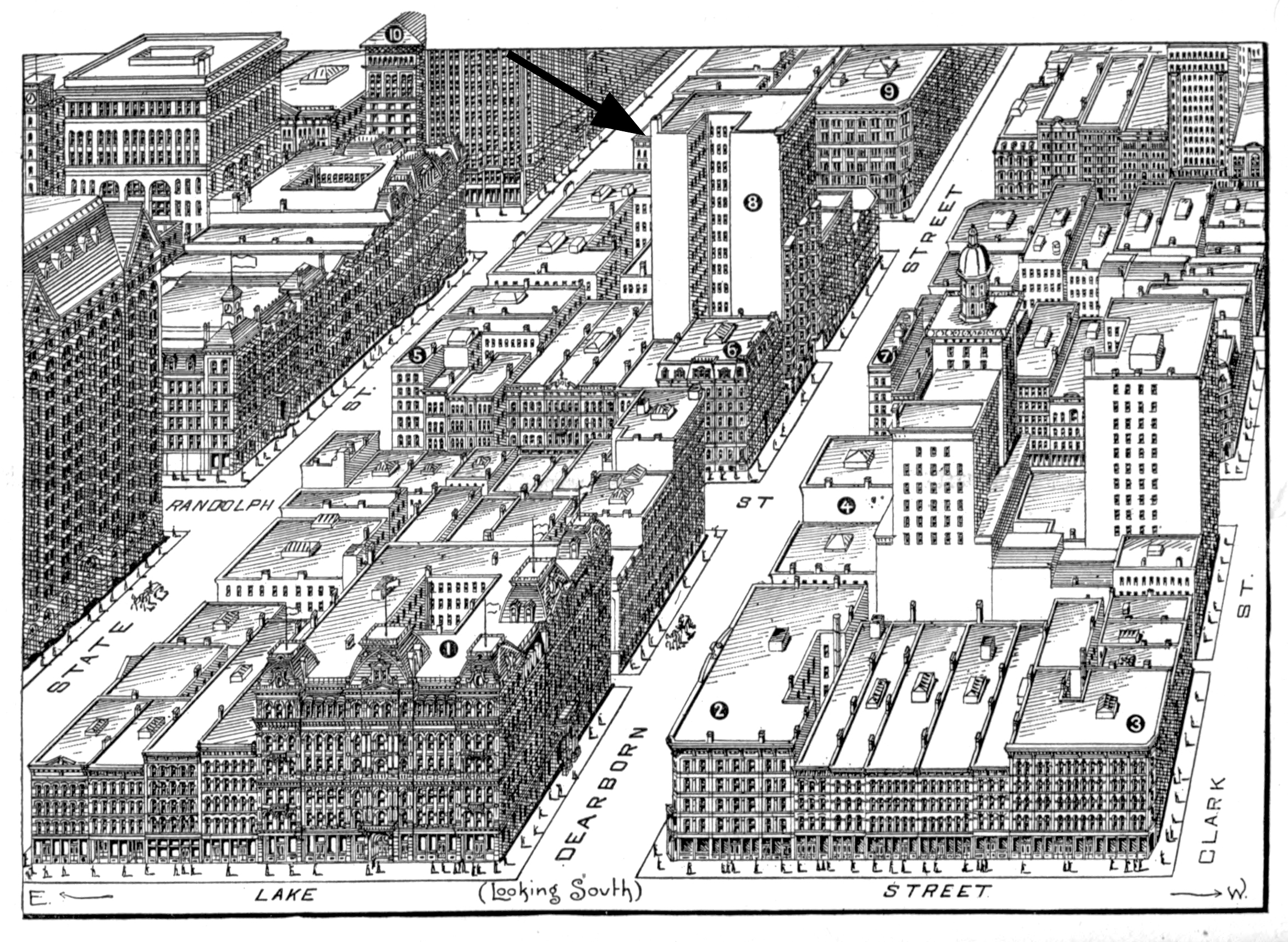 8. The Unity Building
The Unity Building, at 75-81 Dearborn Street, east side, between Randolph and Washington, rose higher and higher, until there was talk of an injunction. It is an example of the very lightest steel construction; is full sixteen stories high, and has weathered gales that blew eighty miles an hour. Its marble-work and ornamental tile floors are exceedingly fine, and the building elicited general admiration as it towered aloft. Having a frontage of 80 feet, and a depth of 150 feet, it rises to a height of 210 feet, with 16 stories and basement. Its corridors are paved with tile and ceiled with white marble, and its structure was conceived wholly with regard to economy and security from fire. Six elevators carry 6,000 people daily, and are usually crowded uncomfortably. There are over 800 occupants, covering all manner of professions and vocations. Cleveland’s Western headquarters were here in 1892. Erected in 1892, at a cost of $600,000. 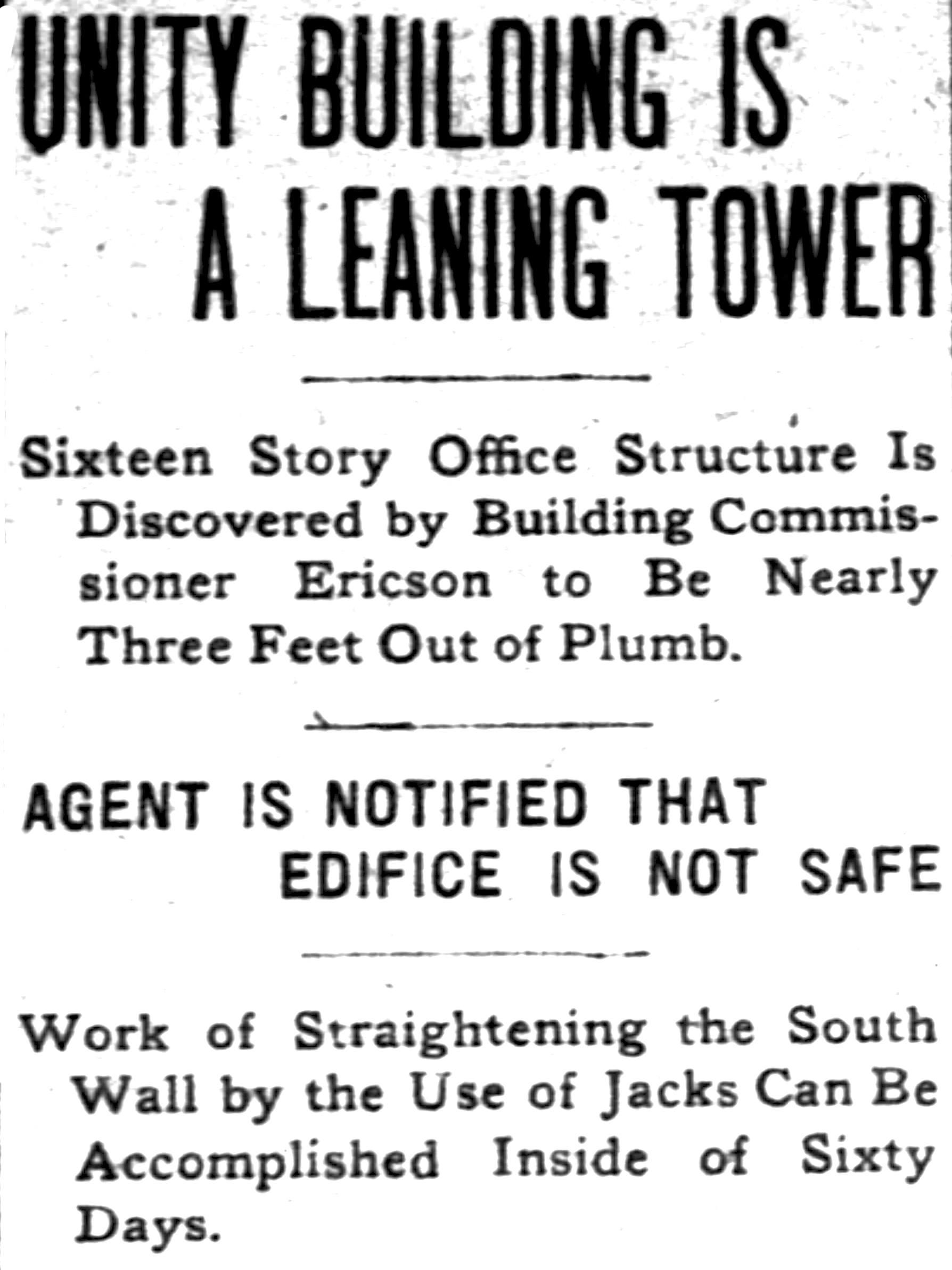 Chicago has a Leaning Tower of Pisa. It was discovered several days ago by Building Commissioner Ericson when he happened to glance up the alley between Randolph and Washington streets and Dearborn and Clark streets.

Orders Walls Straightened.
Yesterday he sent a letter to W. F. Grower, agent of the building, ordering the straightening of the walls under the supervision of inspectors supplied by the commissioner’s office.

I noticed when I happened to glance up the alley side of the building, that the Unity building and the one across the alley from it were coming together. That is, a line extended along the lines of the wall of the two buildings would meet above them.

I went across the street to the City Hall Square building and from its floors took levels on the floors of the unity building. I found the latter were nine inches out of level.

Walls Can Be Straightened.
According to the letter sent to McGrower, the work of straightening the building, which can be accomplished by jacking up the south wall, must be done in sixty days.

He does not believe there is any immediate danger, but insists that the work be done at once to prevent more serious developments.

The building rests upon a floating foundation, the commissioner says, and the cause of the present trouble is the settling of the south portion of the foundation.

The Unity building was one of the first skyscrapers to be erected in Chicago. It was built in the early ’90s by former Governor John P. Altgeld.

Blames Settling on Tunnel.
Attorney Louis E. Hart, counsel for the Unity Safe Deposit company, which owns the Unity building, said last night that steps would be taken today to start the work of putting the building into satisfactory condition.

He called Assistant Corporation Counsel Hoyne on the telephone and told him permits would be taken out today for the work. He said that he believed the settling of the building was due to the fact that a tunnel had been constructed near the foundation by the Illinois Tunnel company. 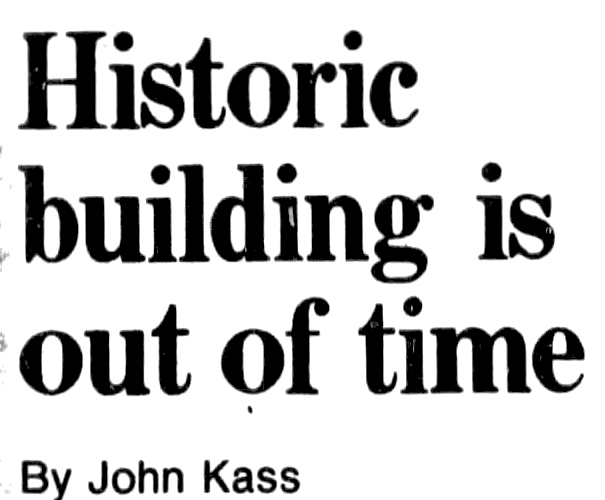 The aging man with nowhere to go stood in the dusty lobby of a once-famous Loop office building that nearly a century ago led to the downfall of Illinois Gov. John Peter Altgeld and is now waiting for the wrecker’s ball.

One minute JohnNelson was talking about a dead ancestor who had fought in the Spanish-American War, a corporal named Ubaldo Buonini, the youngest man in his platoon.

Then—as if the next thought were a perfectly normal extension of the first—Nelson, the Unity Building’s elevator operator, abruptly remarked that he has spent the last 47 years of his life as an invisible man.

He hadn’t planned on it. It just happened. He had been in that building for so long that like so many other workers, in other buildings just like this one, like the cleaning ladies and the cigar counter clerks, the janitors, messenger boys and blue-haired secretaries, he had stopped being noticed as the years went by.

Instead of being John Nelson, 67, a professional elevator operator, he became, somehow, just a balding guy in a brown uniform with a perpetual grin.

Nelson said, who has worked at the Unity Building, 127 N. Dearborn St., for the last 20 years:

I’ve had people staring holes in the back of my head for 47 years. For years I considered it, wondering if they thought about what goes through the mind of an elevator operator.

I’m looking around now, at this lobby, hoping to find a new operator’s job, and I finally realize that people looked at me as if I wasn’t there. As if I were an inanimate object.

He clanged shut the iron grate and nursed the old elevator up to another floor.

That’s the way people have been looking at this building lately. It used to be a place of action and excitement!

The stories of the Unity Building, across the street from the Daley Center, could tell would be of backroom politics, of the ward heelers, courthouse weasels and bit players trudging through its musty hallways.

Several of Chicago’s mayors have put their political offices there. It is the kind of building that passersby don’t notice, a place for elderly but once nattily dressed men in old Panama hats and double-breasted suits who still keep a shine on their shoes.

It is part of Chicago’s history, giving way to new steel and glass. The Unity and others on that block are to be torn town later this month to make way for retail towers and offices in the name of progress.

Altgeld, then a prominent developer, also had an idea of progress. He looked at that real estate 98 years ago and decided to construct his dream skyscraper to replace clumsy structures built after the Great Chicago Fire. To erect the finest office building in the world, he told friends in 1891, was “the great ambition of my life.”

But within a few years after Unity was built, and indebted to a tough, ham-fisted Democratic Party boss, Altgeld would see his political ambitions crushed and his financs ruined, according to William R. Browne’s 1924 book Altgeld of Illinois.

The 16-story building, with 600 offices, was hailed as Chicago’s new “skyscraper” when it was completed in 1892.

To finance the project, Altgeld got a $400,000 loan in 1891 through the Chicago National Bank, controlled by John R. Walsh, an Irish immigrant who started on the streets of Chicago as an 11-year-old newsboy and willed his way to control of the bank and the Chicago City Council.

By 1892, Altgeld campaigned for and was elected governor. And Walsh wanted control over the state’s patronage army. Altgeld refused the political boss.

A depression hit the city, Altgeld’s building defaulted on the loan interest, and Walsh showed no mercy.

The governor, so highly regared that perhaps he could have been elected president, lost $500,000 on the project and was plunged into financial ruin as the building was sold into receivership.
“There is so much history here that it boggles the mind,” said John Nelson as he brought his elevator back to the Unity’s marble lobby.

“But we’re alike. The past is unacceptable to the ideas of progress. This building’s going down, an I have to find someplace to go.” 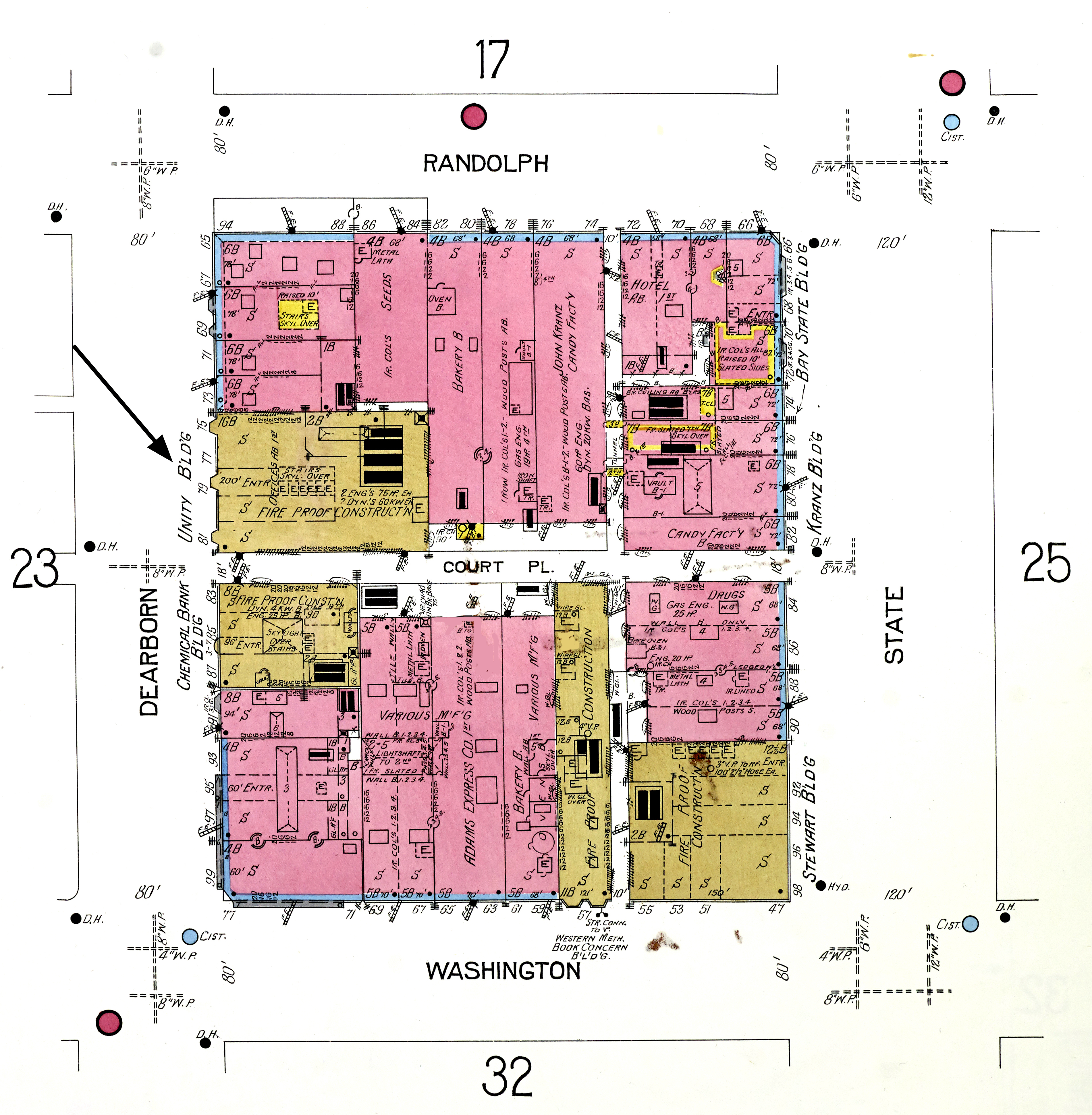