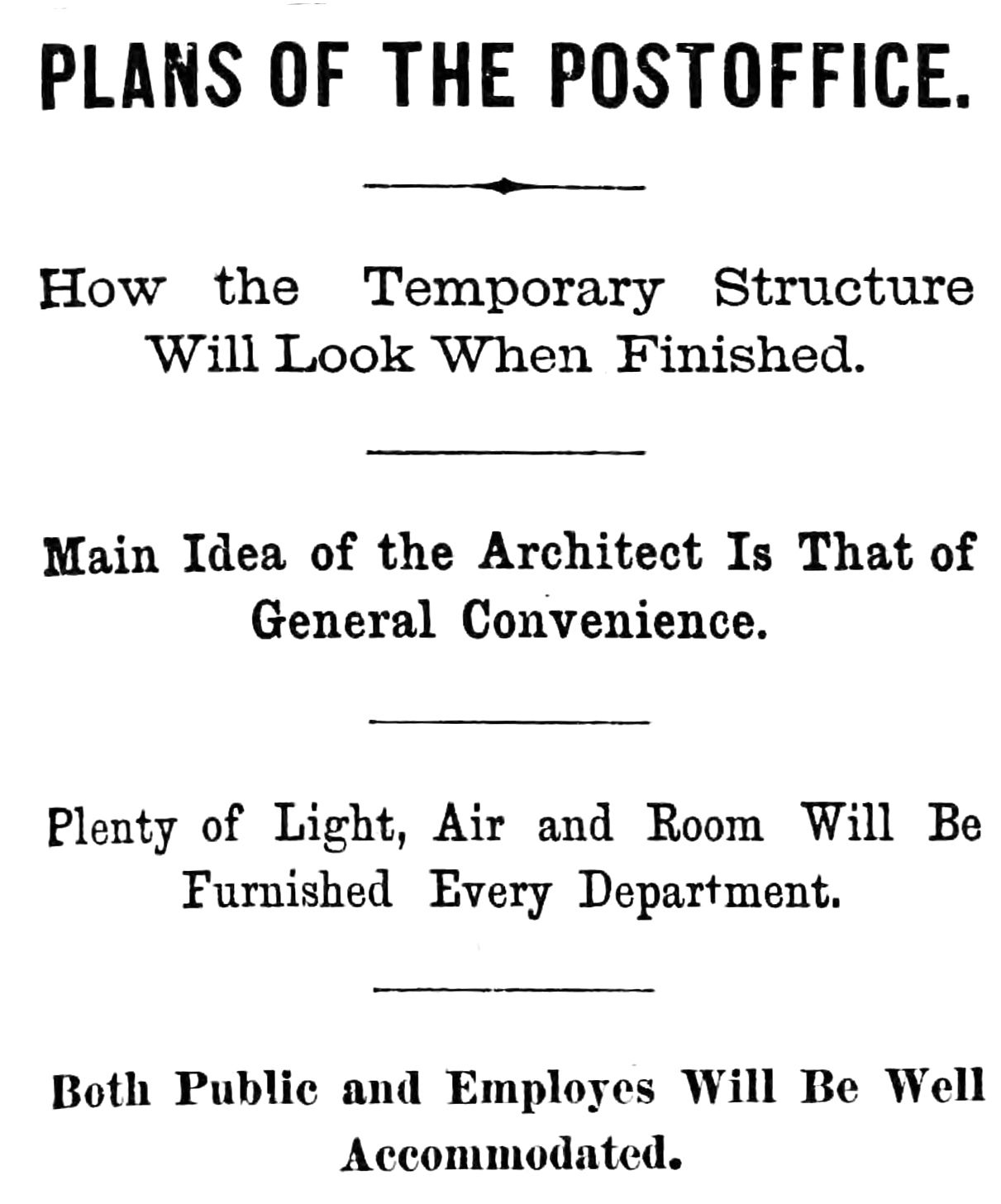 The plans and specifications of the new temporary postoffice building as decided upon are in the hands of the custodian of the Chicago office. cut of the proposed structure is presented herewith. The building is to be located on the lake front, between Randolph and Washington streets, fronting on Michigan avenue. The cut presented is the west, or Michigan avenue, elevation. The government authorities are at present advertising for scaled proposals for the construction of the building, and it is expected that by the middle of summer will be begun.

The edifice will be of plain red brick, finished in terra cotta, and while not elaborate, will tend toward the doric style of architecture. The central portion will be two stories in height, flanked on either side by a one story wing. The entire structure will have a frontage of 500 feet, and extend back 250 feet. The main portion will have a frontage os 160 feet and the same depth as the other portion of the building.

The roof of the wings will be pierced with several skylights. The central portion will have a court to give light to the mailing department below.

In selecting the design for the structure the supervising architect had in view convenience, light, and ventilation, and in securing these he has succeeded, for there is not a room in the building but is amply supplied with both light and air.

The principal entrance will be in Washington street. It will be twenty-four feet in width and consist of eight doorways, with large doric columns on either side. It will be reached by a flight of six steps. Near the Randolph and Michigan street ends of the building, facing Michigan avenue, are entrances twenty-one feet wide. These, as well as the main entrance, will open into a broad lobby extending north and south. This lobby is well lighted by skylights. On either side of the main entrance leading from the main lobby will be a stairway to a landing just over the doorway, and from this landing leading to the second floor is one grand stairway. The second floor is twenty feet above the ground floor, giving room for ventilation. 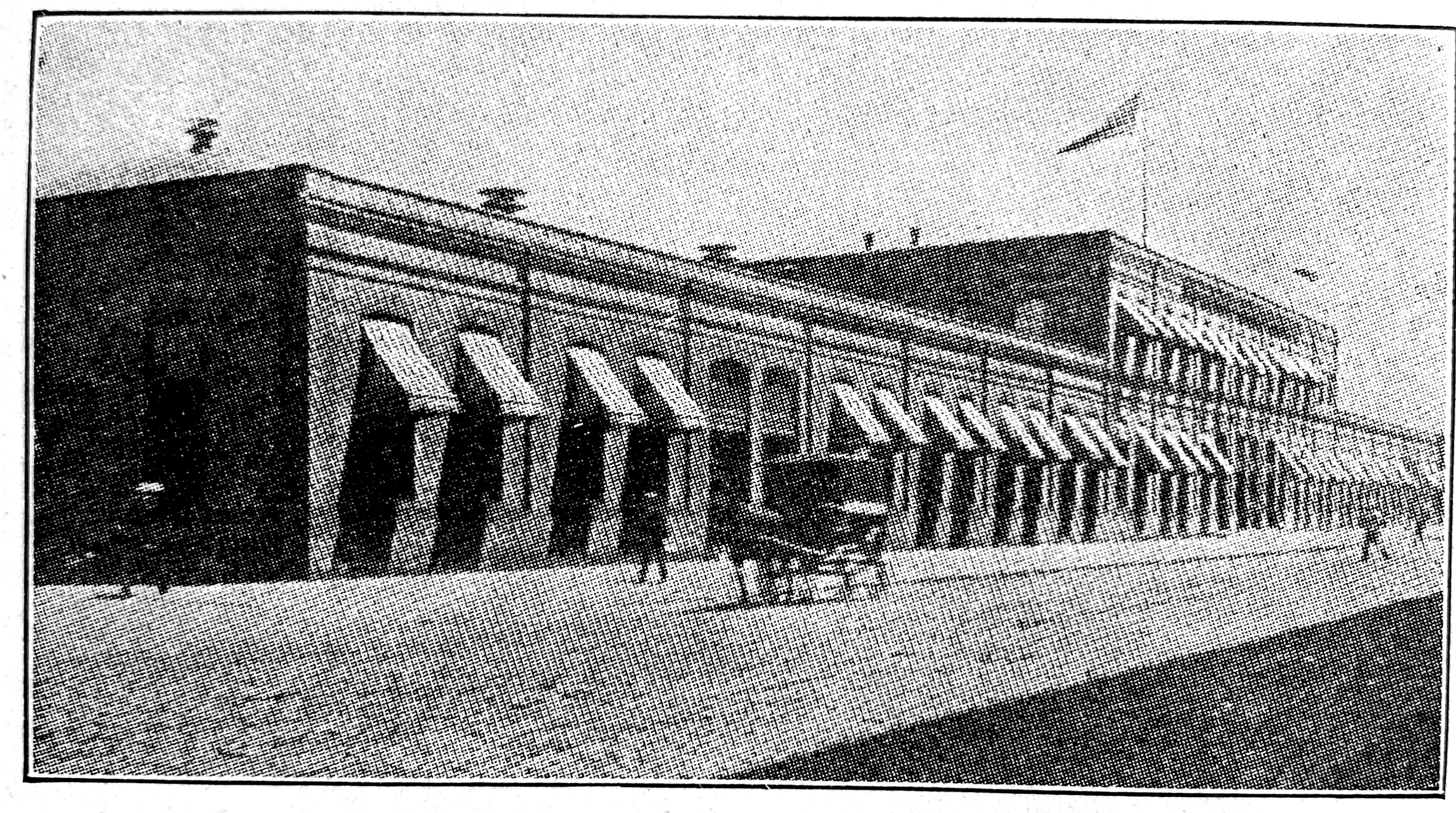 THE POSTOFFICE BOTCH.
After ten years of vexatiously protracted construction Chicago has its postoffice and finds it a botch. It is architecturally more imposing than the unpretentious but useful structure on the lake front, which has answered its purpose so excellently. The new building has a handsome dome, likewise stately wings, and more or less elaborately decorated interior. In these respects it outdoes its one-story brick predecessor. In facilities for caring for the mails, loading and unloading them, receiving and distributing, and in general administering the great public utility for which it is intended the homely shack on the lake front is far and away superior to the new building in Dearborn street.

The original suggestions ot the postoffice department as to handling and for the mails were rejected by the architect, who was working not so much for the public convenience as for personal glory. In place of the methods suggested he devised the hideous chutes in Dearborn street, which are an inconvenience to pedestrians, a detriment to the interests of property-owners, a public nuisance, an obstruction to the busi- ness of the street, and a disfigurement of the architectural appearance of the east front of the building. One proposition was to build a shed over the sidewalk, but this was too audacious for consideration and was abandoned and the iron chutes substituted, which, in turn, will necessitate about two hundred thousand dollars’ worth of chutes and elevators within the building to get the mail from the basement to the second and third floors for handling. In carrying out the present arrangement the architect has made Dearborn street the back yard for the postoffice, erected eyesores, and arranged blocking tp an already congested and narrow street with long lines of mail wagons.

It was the duty of the United States government to provide a building capable of accommodating the huge postal business of this city, to keep its premises in good order, and to provide ample conveniences for loading and unloading the mails. All this could have been done if the structure had been, planned and constructed by a special architect, as other business buildings, theaters, and hotels are, and not by an architect whose principal object to exploit his own fame. It was possible to have built a structure combining beauty and business facilities. What has been accomplished is a structure combining beauty and botch.

Something must now be done to remedy the botch, and it should not take another ten years to do it. Apparently the only way out of its trouble for the government is to build large branch at the great railway stations on the south, north, and west sides, say near the Adams street Union station, the Northwestern, and the Polk street or Park row station, which relieve the heavy work of the general postoffice. These, with tube service and, perhaps, underground tunnels, may obviate, for instance, the existing necessity of sending a huge bulk of mail to the general postoffice from the-west side, sorting it over, and sending 50 per cent of it back to be taken out by the various roads leaving the Union station.

Something of this nature will have to be done to relieve the situation and carry on the mail transportation of this city. Evidently this use of the now building was not considered by the architect, lie has given the government an impressive dome, will not be so impressive after it has been exposed to Chicago’s soot a few years more, with a structure under it which is well adapted for most anything but the purpose it was intended to serve. And this is what the government gets from architectural amateurism. 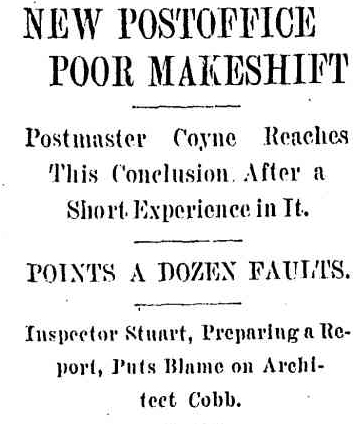 Chicago’s $5,000,000 federal building is a poor makeshift as a postoffice.

That was the opinion expressed yesterday by Postmaster F. Coyne and his subordinates down to the “shift” that has to block the wheels of the small wagons drawn by four sad eyed mules and two horses up the steep incline of the driveway.

Mr. Coyne wasn’t complaining—he said he had done that three years ago. He said he was doing his best to get along in quarters that admittedly were inadequate and badly arranged.

Personally, Mr. Coyne has nothing to complain of. His office is spacious and luxurious. But the men who have to get the mail out on time—who are subjected to a thousand and one inconveniences and hardships—say, after a week in the new building:

Give us back our old temporary postoffice on the lakefront.

Inspector Janice E. Stuart is preparing a report to the government about the postoffice and will not anticipate what he is going to say, but officially he blames the people who a dozen years ago insisted on the employment of Henry Ives Cobb as architect.

•Owing to the bad and inadequate arrangements, it is still necessary to use the old postoffice building on the lake front.
•The platform space in the driveway is insufficient and it takes one-fourth longer to handle the mail than it did at the temporary building.
•The runways are too steep, requiring extra teams and wagon blocks. Later it will be necessary to install hydraulic lifts at great expense.
•The chute boxes in Dearborn street are inartistic and a great bother.
•The arrangement of of the postoffice has necessitated the installation of $250,000 worth of machinery that takes up valuable space and doesn’t always run smoothly.
•Extra men are needed and the old men have to work overtime, some of them twelve hours.
•There are drafts all over the building.
•Stamps, money orders, and money is blown about at the windows to the annoyance of patrons and despair of the clerks.
•So much noise is made by the machinery that it is impossible to hear anything except the complaints of patrons.
•Dirt from the light shafts drops on the workers and mail in the city delivery and other departments.
•There is not enough drinking water in the city department and the mailing division—but two fountains being supplied for each thousand men.
•There is a vast amount of waste room that it is impossible to utilize.Lobby space has not been provided in the city department.

Congestion at Mail Chutes.
The congestion at the postoffice is most noticeable in the late afternoon and evening, when long lines of wagons are standing in Dearborn street waiting their turn at the mail chutes. Some of the wagons are obliged to wait an hour. Postmaster Coyne’s remedy for this is to have business men mail their packages early in the morning.

“We are not complaining,” said Postmaster Coyne. “We made all our complaints three years ago, and we are doing as much as possible to remedy defects by the application of modern machinery. we hope before many weeks to have everything in running order.

“Every one knows, of course, that this was not arranged by the postoffice. The ideal postoffice would be all on the first floor, and would have but one entrance. A general postoffice is nothing more than a factory for converting raw mail by registration, cancellation, routing, and tying up into the finished product, and this building never was intended as a factory. Our space is divided into three floors, and practically into three city blocks.

“It is remarkable what has been accomplished by the loyalty of the men. There was some congestion last Wednesday and Thursday nights, but last Saturday night everything was cleared up and there has been no more serious trouble. The increase in October business was $107,476, or 20.92 per cent over that of the corresponding month a year ago.”

Needs $75,000 for Improvements.
Mr. Coyne thought it would take at least $75,000 to make the postoffice what it ought to be. This would include tile shafts around the belt conveyors and elevators to lessen the noise and draft, and hydraulic elevators for the driveway. Station U, at the Union railway station, and Kinzie station on the north side, would relieve the congestion 75 per cent when they were in proper running order, and he believed that the temporary postoffice on the lake front could be abandoned as soon as the Illinois Tunnel Company is ready to take mail, which it promises to be in another month.

“Don’t blame the government for the makeshift postoffice,” commented Inspector Stuart. “Twelve years ago Chicago was clamoring for a local architect, and it got one, and the result is seen. A postoffice should be on one floor, and all the departments should extend around a court or rotunda with one main entrance. The building looks all right from the outside, but the old temporary postoffice was a great deal better arranged.”