The Teutonia block, on the southeast corner of Fifth avenue and Washington street, will be a very fine stone front building. Work is being done on the second story. It is 30 feet on Washington and 7- om La Salle.

Teutonic Building.—Location, S. E. Cor. Washington st. and Fifth ave. This building stands upon the site of the old Teutonia building, in years gone by named after and occupied by the Teutonia Life Insurance Co. It is a ten story structure and covers 60×80 feet. Owners, W. C. Seipp and T. J, Lefens. The interior is beautifully fitted up. The exterior is imposing.

The Teutonic is the name selected for the building for which foundations are being laid at the southeast corner of Fifth avenue and Washington street. It is to be a ten-story structure, covering 60×80 feet. Two old-style office buildings were torn down to make way for the Teutonic. The structure is being built for W.C. Seipp and T.F. Lefens after plans by J.K. Cady.

Teutonic Building.—Situated on the south east corner of Fifth Ave. and Washington St. It is 60 by 81 ft., with court 10 x 40 ft., and is 138 ft. high from grade line to top of cornice. The style is that of the German renaissance. The exterior is of terra cotta to the top of the second story window sills, and brick and terra cotta above. The foundations are of steel rails and is on concrete (Eng News, Aug. 8, 1891), and the columns are built up of plates, channels, and angles. The floor beams are generally 12 in. deep, and the allowance for load on columns is about 8,500 lbs. per sq. in. Wind bracing is confined to the exterior walls. There will be a restaurant in the basement, stores on the first floor, and offices above. Marble wainscoting will be used, and the entrance will be finished in marble, while mosaic floors will be used in the corridors. Architects, Handy & Cady. Contractor, C. Everett Clark.1 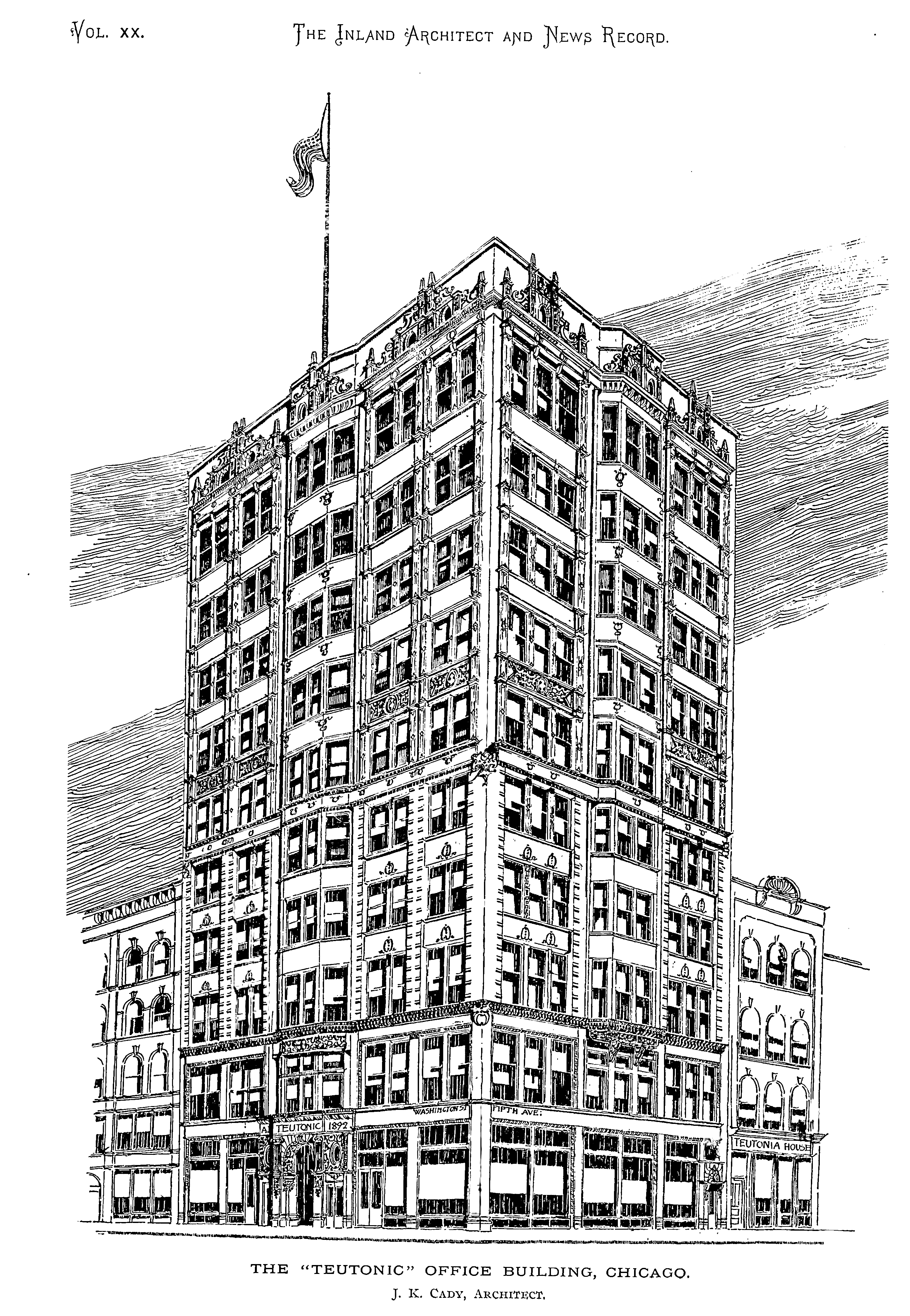 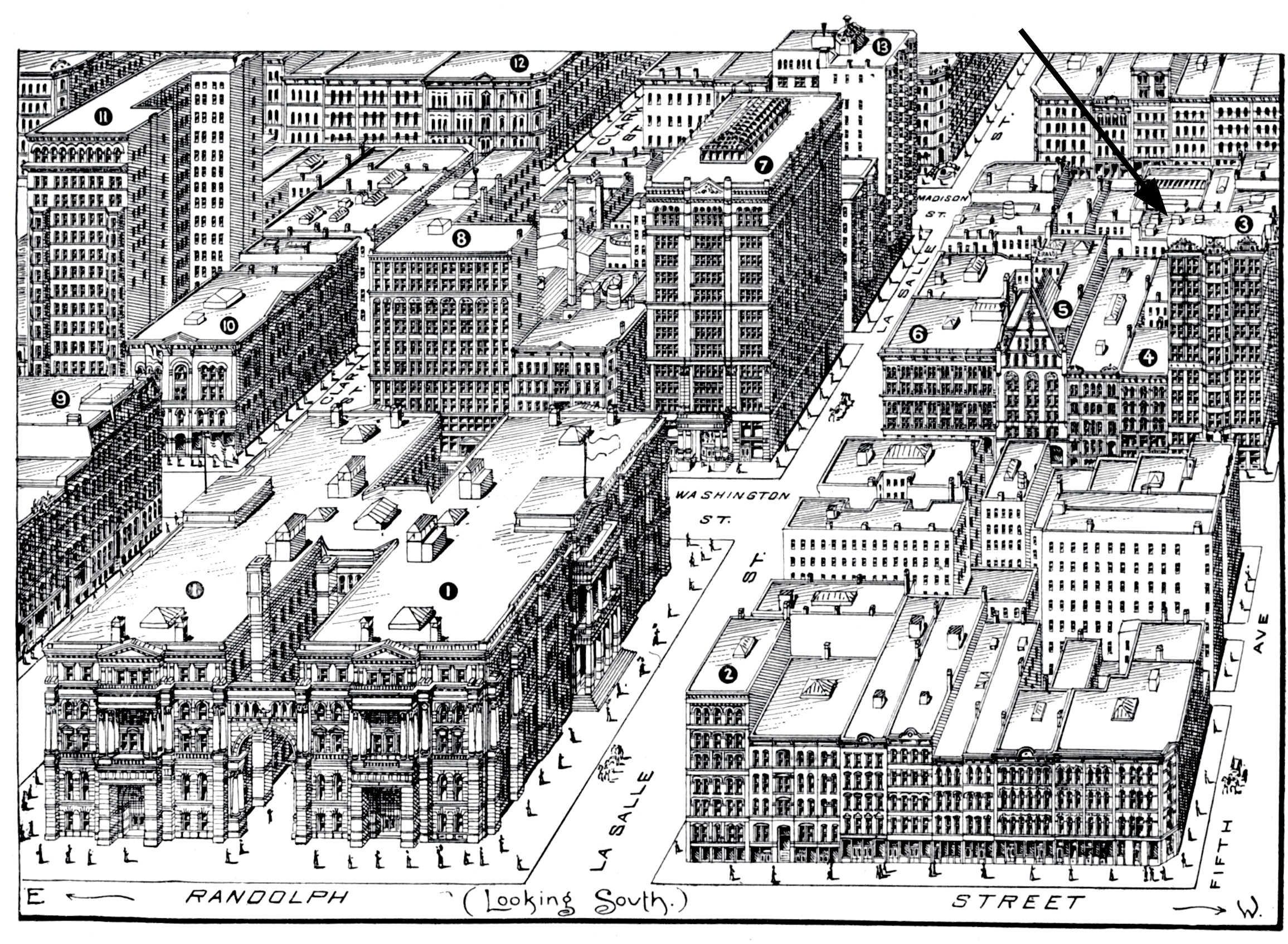 ③ The Teutonic Building
At the southeast corner of Washington Street and Fifth Avenue, is one of the newest of the notable high buildings of Chicago, and has a place in another chapter. Its frontages are 80 feet on Washington Street and 61 feet on Fifth Avenue. It is 130 feet high in 10 stories and basement, being but 10 feet higher than the 5 stories of the Court House. It has 4 stores, 125 offices, and 3 passenger elevators. Its exterior is of brick and terra cotta. Its interior is of steel and fire-proof tile. It is occupied by real-estate and investment brokers, attorneys, and other. It was erected in 1892-93.

Lightning struck the Teutonic Building, Fifth avenue and Washington street, yesterday noon. The larger portion on the the north finial of the balustrade on the Fifth avenue side of the building was neatly split in two, a part falling to the pavement below and the remainder scattered over the roof and the court of the building. That portion which traversed the distance of ten stories to the pavement fell among the passing pedestrians and, together with the shock of the storm, produced a panic.

No one among the pedestrians was injured, though several persons had narrow escapes, among them J.H. Kirk, who has a suite of rooms on the sixth floor of the building, and Eddie Harris, a newsboy. The tenants of the big building from the tenth to the sixth floor felt the shock severely. In some of the rooms a panic ensued. Miss Houston, a typewriter in room 801, fainted. Ex-Coroner Hertz, who has an office on the tenth floor, Col. Moore, J.C. Satterlee, and others, keenly sensitive to the shock and momentarily blinded by the brilliancy of the lightning flash, fled into the hallway, where they were confronted by a fantastic display in the building’ court, which seemed to form a center for the electric current in its efforts to reach the ground. Elevators were hastily summoned and many of the tenants left the building, although the shock and clash and storm were over before the ground floor was reached. The building was not injured aside from the finial and the blowing out of some of the electric plugs on the tenth floor and in the basement.

The Teutonic is the first of the “skyscrapers” to be struck by lightning. It is a steel structure from the basement to the roof. A close examination of the point of contact and the immediate surroundings, together with the fact that the electric plugs were blown out in the basement, suggests the conclusion that the electric current, after demolishing the terra-cotta covering of the finial, came in contact with the steel rod which supported the demolished finial and by it was communicated to the steel structure itself, thus making a conductor for the electric roof to the basement. It will also account for the severity of the shock from the tenth to the sixth floors, during the time the electric current was in process of distribution. This steel rod in the finial extends a foot and a half above the balustrade. The lower portion of of the rod is connected with the steel framework of the big structure. The finial is of terra-cotta, two and a half feet in height by six inches in diameter and weighed twenty pounds, the fragments of which indicate that it was struck in the center. The lower portion iof the finial, the steel rod, and even the cement used in joining it to the balustrade remain intact. This little steel rod seems also to have protected the lower portion of the finial from the ravages of the electric current, although less than two feet from the point of contact.

The Teutonic’s experience with an electric storm suddenly generated by intense heat was widely discussed during the day by architects and owners of big buildings.

Teutonic building, at southeast corner Washington and Wells to be remodeled and called “The Roosevelt.”

A.C. Thompson, the new owner of the Roosevelt building, is one of the wide awake and public spirited young men who are remaking Chicago, since he purchased the property it has been rebuilt and greatly improved. Mr. Thompson makes the following statement in relation to its bonds which good judges regard as a safe and paying investment:

We are pleased to furnish you with the following information relative to the Roosevelt Building issue of first mortgage bonds of issue.

The Roosevelt building is located at the Southeast corner of Washington street and Wells street, formerly known as the Teutonic building.

The building is a ten story steel, fireproof office building covering the entire lot, 81 feet on Washington street and 60 feet on Wells street. The first floor is occupied with stores, the second floor as general office spaces and the balance of the floors contain typical offices. There is approximately 40,000 square feet of rental floor space in the building.

The Roosevelt building at the southeast corner of Washington and Wells street, together with a ninety-nine year leasehold estate, was sold yesterday by Meyer B. Kadison to the Washington-Wells Building corporation for an undisclosed consideration. Joseph Stone is president of the building corporation. The Roosevelt was one of the first skyscrapers to rise in the loop. Originally it was called the Teutonic building, but when the United States entered the world war it was renamed for the late president. It is eleven stories hight. The fee, 81×60 feet, is owned by the Selp estate. The lease has about ninety-nine years to run, according to Louis Bomash, broker in the deal. A.H. Kohlammer Jr. was the attorney. 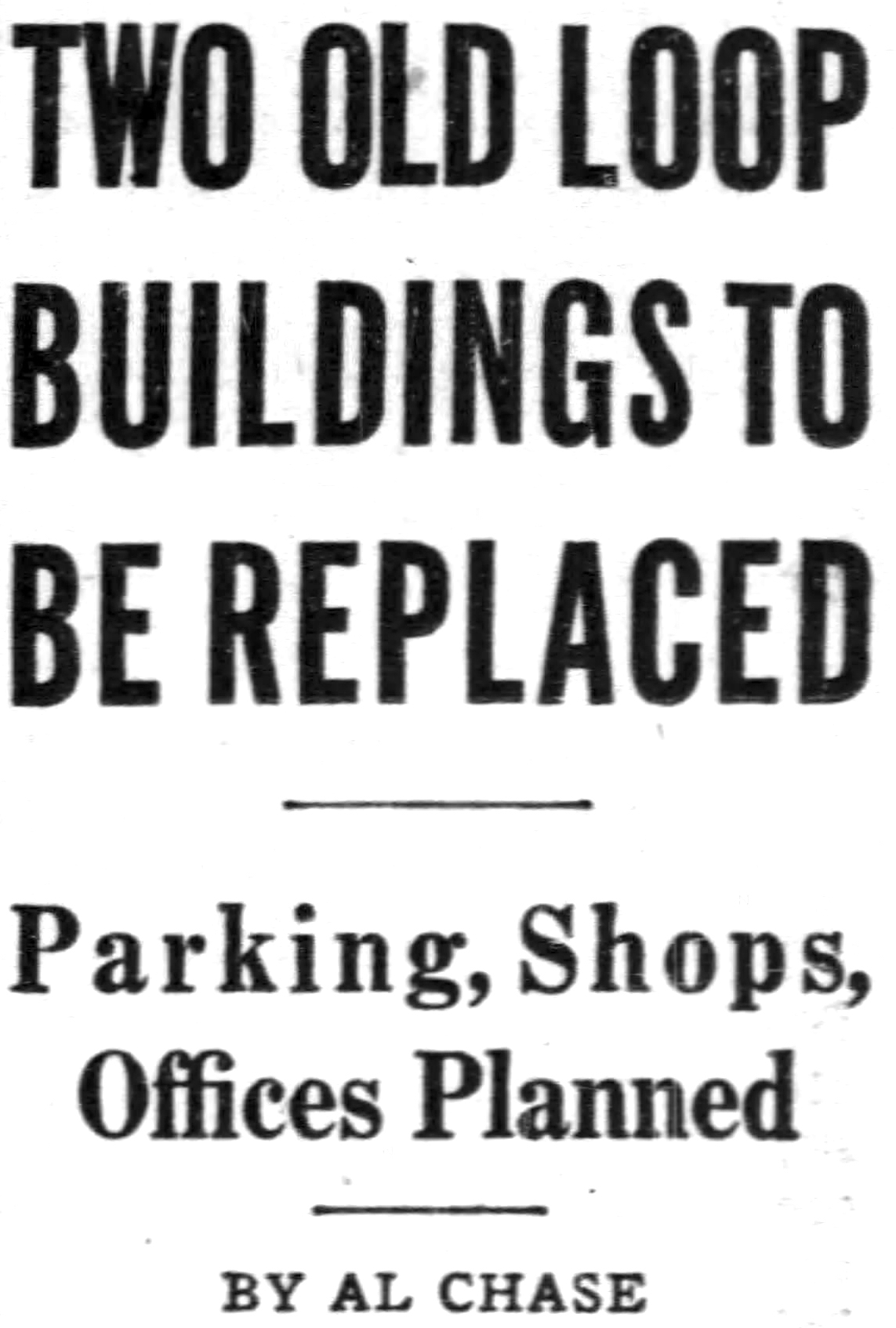 A tentative contract has been signed for the demolition of the 11 story Wilkinson building of J.C. Wilkinson & Co., owner, said yesterday.

Negotiations under way are expected to result in a long term lease, probably 30 years, with a Chicago parking company which will erect a three story and basement parking structure on the site with a capacity for 500 cars daily, he explained.

The building fronts 90 feet on Washington st. and 65 feet on Wells st. An additional 40 by 90 feet, south of and adjoining the Wilkinson building, may be used as part of the site of the proposed garage building.

The five story Washington-Dearborn building will lose its three upper stories, but the walls of the two lower floors will be retained and the structure rebuilt into a modern two story shop and office building, said Charles McKenna of Real Estate corporation, building manager. 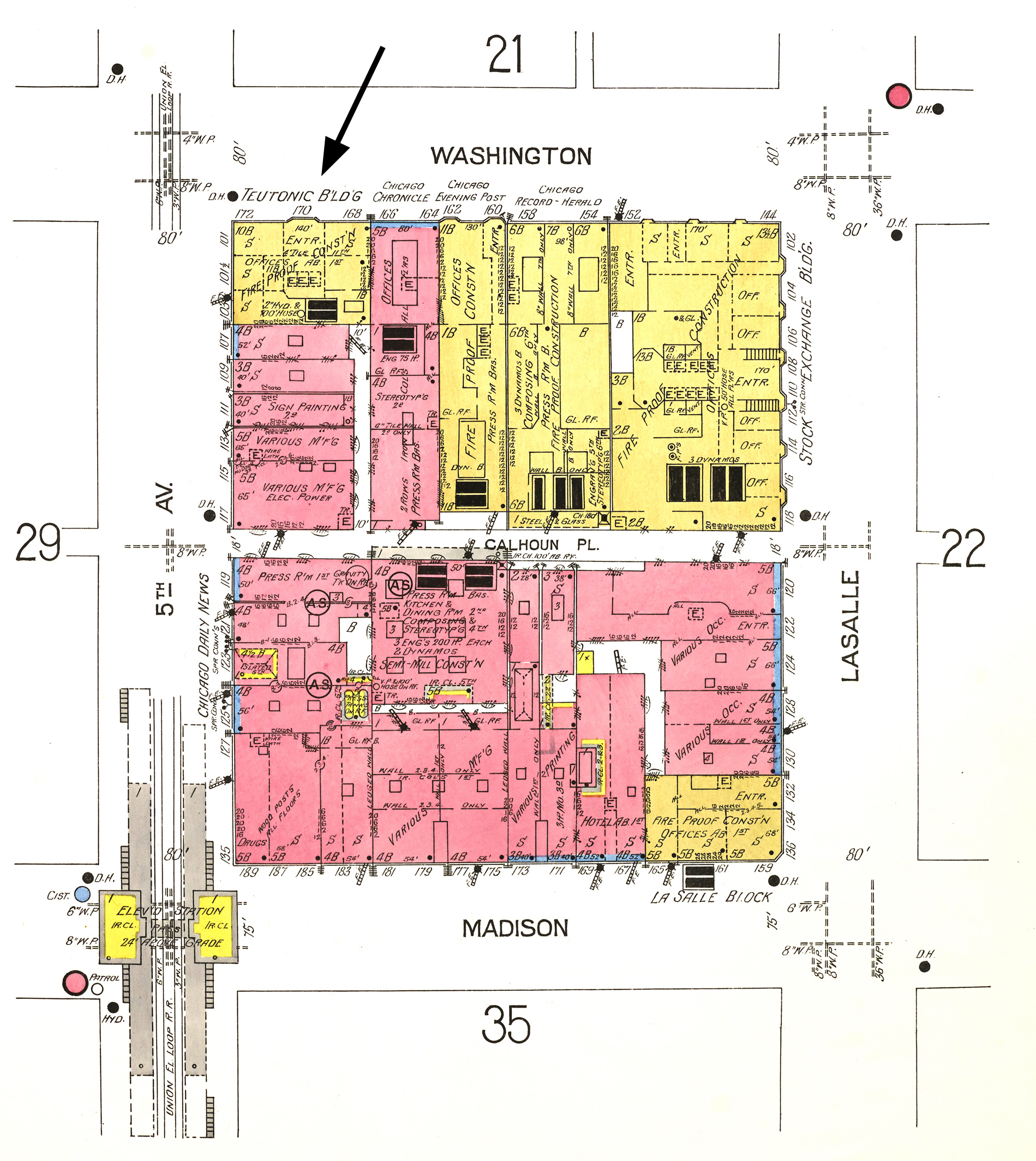 1 In addition to being built in the German Renaissance style, there is a possibility that the building owners were inspired by the British steamship, RMS Teutonic, which was launched in 1889. In 1893, the Princess Kapiolani, heiress to the throne of Hawaii, sailed for New York on the Teutonic. She went on to Boston and Washington. The Teutonic was scrapped in 1921, the same year Chicago’s Teutonic Building changed its name to the Roosevelt.