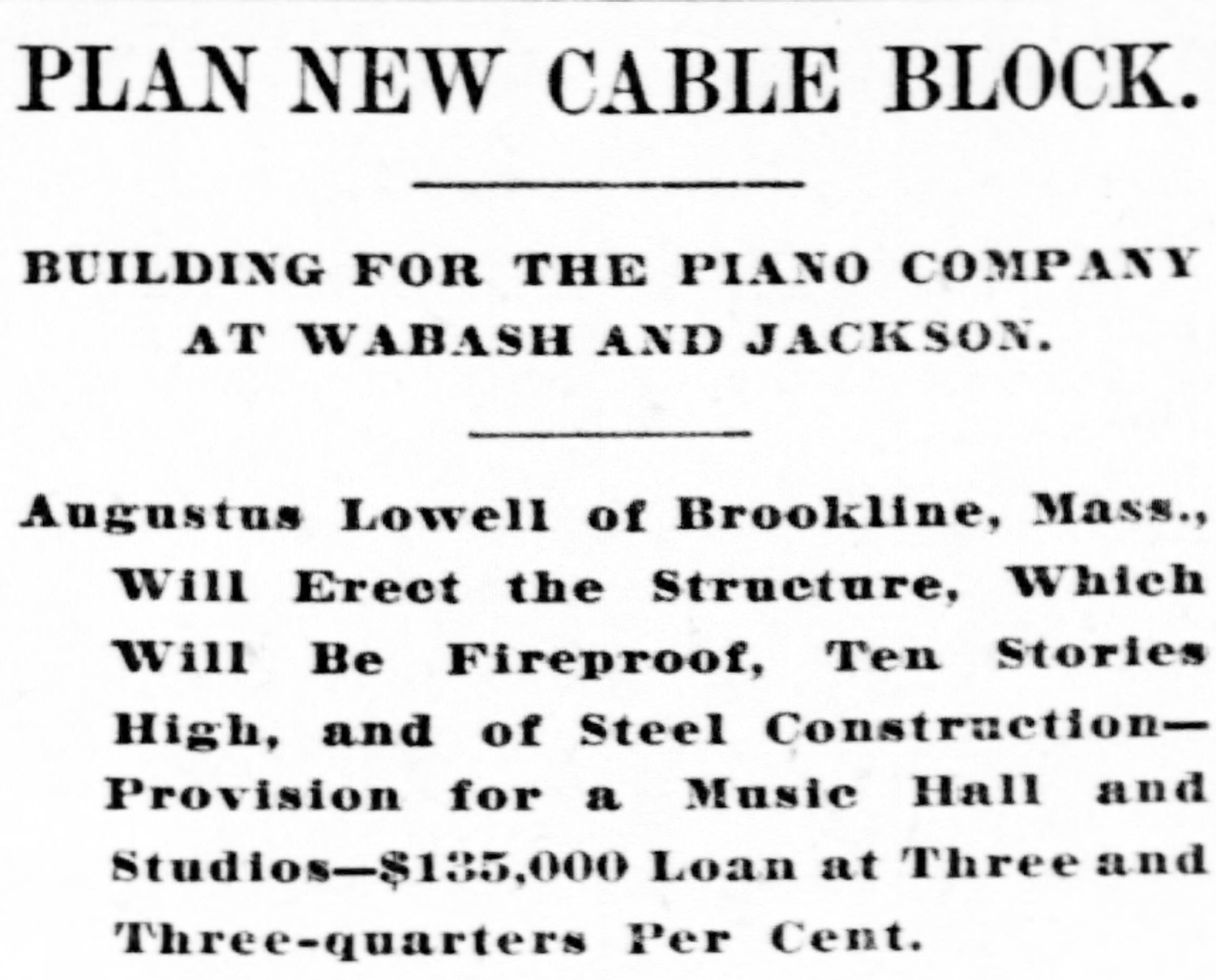 Augustus Lowell of Brookline, Mass., will erect a fireproof ten-story steel construction building at the southeast corner of Wabash avenue and Jackson boulevard. It will be taken on a term lease by the Cable Piano company, which was burned out in the Ayer Building last February.1

The structure will be called the Cable Building. The upper five floors will be divided into studios with soundproof partitions to deaden the noise of the trains on the elevated loop. The ground floor and the two stories next above it will be practically of glass in order to make good showrooms.

The site is 240-242 Wabash avenue, having a frontage of forty-six feet and a depth of ninety feet in Jackson boulevard. The property was valued by the Tax commission at $264,610, of which $218,970 is in the ground and $45,640 in the present building. This building will be torn down next year in order to make room for the new structure, the leases all being is such shape that they can be cancelled.

The negotiations for construction have been under way for some time, but only within the week have they reached a point where the final preliminaries before the closing of the contracts could be arranged. The Cable Piano company was anxious to obtain a permanent home and remove from its present quarters at 258 and 260 Wabash avenue. With this end in view negotiations were entered into some time ago with Rounds & Wetten and Alsis, Aldis & Northcote, agents for the Lowell property.

Holabird & Roche were asked to draw plans for a new structure. Estimates were also taken on the cost of remodeling the present building, which is six stories high and of old design and interior arrangement. One of the features of the new building will be a music hall in the fifth story. 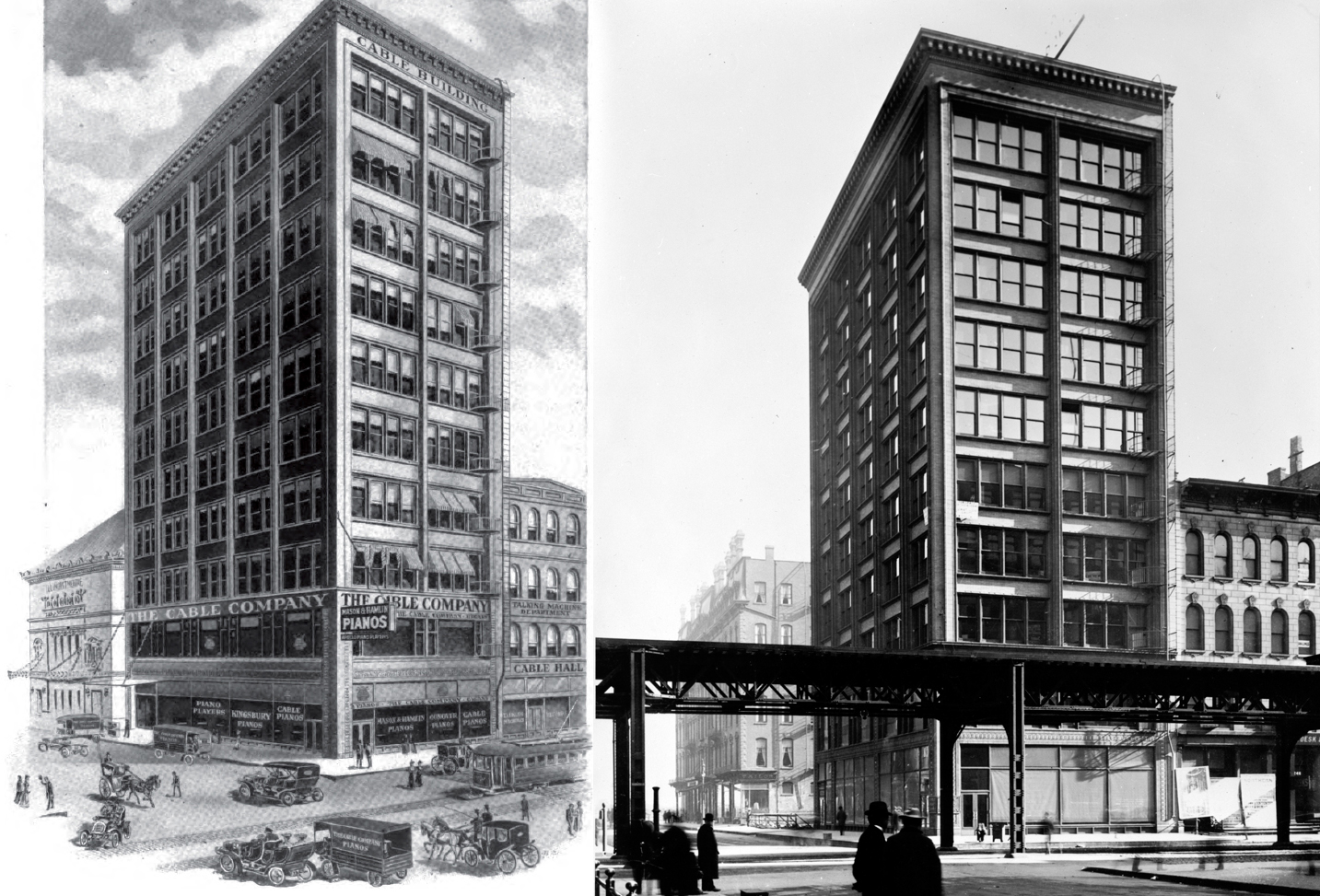 A Comprehensive History of the Development of the Piano by Alfred Dolge, 1911

Herman D. Cable, born at Walton, N.Y., in 1849, spent his early days on a farm. After attending Walton Academy, he turned to teaching, with such success that at the age of 17 he was elected principal of the schools at Easton, Pa., and a year later appointed superintendent of schools at Williamsport, Pa. In 1869 the publishing house of Barnes & Company sent him to Chicago as manager if their western department, and for 11 years Cable filled that responsible position with great success and fidelity. In 1880 he formed a partnership with the organ builder, F. R. Wolfinger, organizing the Wolfinger Organ Company, which was changed to the Western Cottage Organ Company, and later on to the Chicago Cottage Organ Company. He died prematurely on March 2, 1899, at the age of 50.

The business, having been incorporated, has been continued, but the name of the company was changed to the Cable Company, in honor of the founder. F. S. Cable served as president until 1903, when he started in business on his own account. He was succeeded by F. S. Shaw, under whose able management the company largely extended its activities, adding a department for player pianos, and paying careful attention to the development og the artistic Conover piano, preparing for the introduction of the same on the concert platform. In the short space of 20 years the Cable Company has attained a position as one of the great leaders of the western continent, and the genius of H. H. Cable has shown in contemporaries the great responsibilities of the piano business in its legitimate channels. 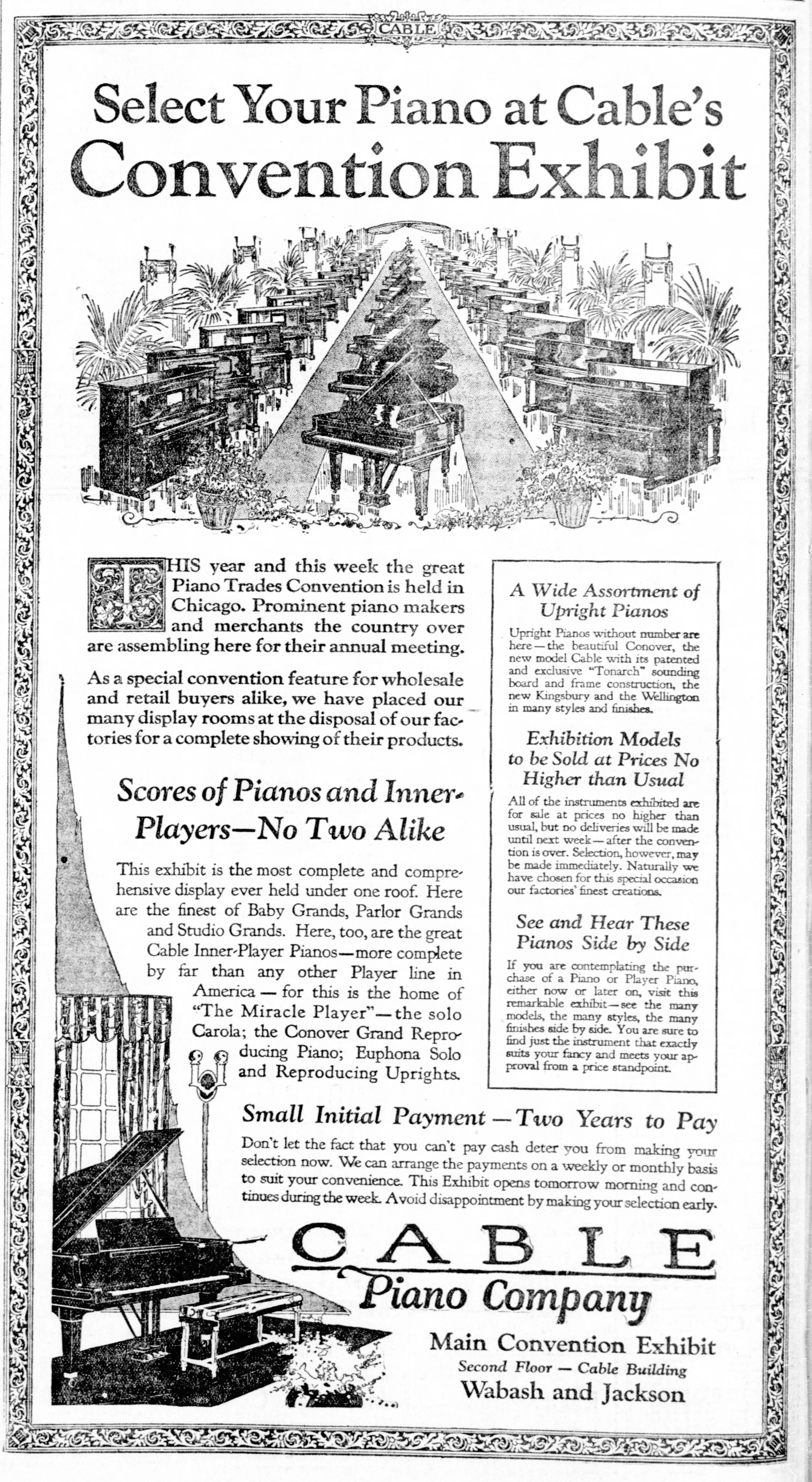 THE portable phonograph is being widely used this season for vacation music, according to the reports of the dealers who are in touch with the situation. It is a common thing to find a portable on the automobile or on the rowboat or canoe.

The Cable Piano Co. of this city reports a large sale of Victrola and other portable models in its retail store at Wabash Avenue and Jackson Boulevard. The company has prepared a very attractive folder on the subject of “Vacation Music” which has much to do with the increased sales of portables. The folder has a cover printed in red and green bearing an illustration of a canoe equipped with a portable. On the back page are illustrations of the various vacation activities where the portable can be used to advantage. They are: The campfire, mid-day rest, porch dancing and canoeing. In pointing out how the portable can make the vacation more enjoyable, the folder says:

“Decide now to have a real vacation this year. A vacation with music. Whether you are going camping, fishing, boating, hunting or motoring you will find that one of these handy portable phonographs will help to recreate. Truly wonderful for tired nerves and fagged brains—the world’s best music at your campfire will add greatly to your pleasures and happiness.”

THE REPUBLIC BUILDING
Chicago, Nov. 12—While the fate of the Garrick building is being decided, two more buildings of the Chicago style are lost to the patrimony of the cuty. The Cable building is now almost down, and a sign on the Republic building announces its imminent destruction.

Cable, built in 1899, and Republic, 1905-09, were designed by the great firm of Holabird and Roche, and are excellent examples of the Chicago style, expressing steel frame construction in clear architectural terms. The Republic in particular, noble in conception and elegant in execution, is one of the latest examples of the distinctive Chicago style, erected just before a wave of eclectic taste buried the native genius of the American cities for a generation.

State street is Chicago’s shopping showcase, and could be an architectural showcase as well. No street in the world, not in America, has a row of native buildings of the originality and vigor of Burnham and Root’s Reliance; Holabird and Roche’s Republic and Century, across from each other at Adams (what a pair!); Sullivan’s Carson’s; Jenney’s Fair and Sears buildings. What other city is so rich in treasures of its own creation?

Home Federal Savings and Loan association is said to have bought the Republic in the hope of adapting it to its purposes. When technical studies showed this conversion would be impractical, it would have behooved any responsible architect to save the Republic for general use, and erect a new building on another site. Are they perhaps afraid that their new “milk carton” structure will suffer, by comparison with the works of the classical architects of Chicago?

Assuming, however, that the architects are designing for Home Federal a truly significant and original headquarters, let it take its place among such fine buildings as a Republic still standing. A number of the small, blighted structures could be removed to make room for it, and the new tower beside the old would show at once the native roots and the contimnuing vitality of Chicago’s architectural genius.

A new city plan for “token” preservation of certain architectural works will be instituted at 9:15 a.m., today at the 11 story Cable building, 57 E. Jackson blvd., by the Chicago Commission on Architectural Landmarks.

An eight foot section of the ornamental stone facing of the building will be removed and stored at Navy pier until a suitable location for display is selected. The commission also has numerous pictures of the interior and the exterior of the structure.

The Cable building designed by the architectural firm of Holabird and Roche, was built in 1899. After its demolition, a 15 million dollar building is to be constructed on the site for the Continental-National Insurance Companies. 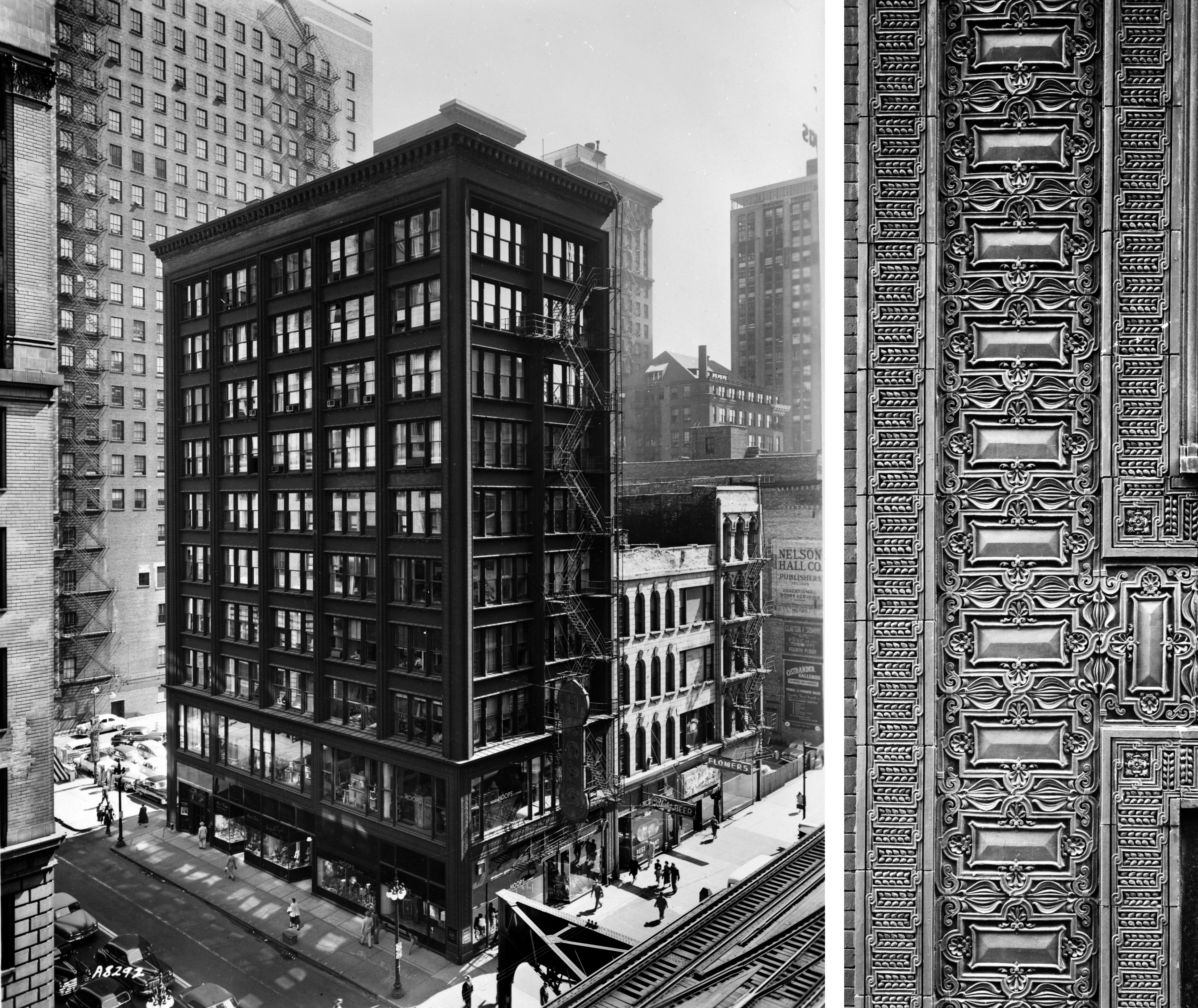