Description of the Fine Structure to be erected on LaSalle Street.

The new Stock Exchange Building, for which plans have been prepared by Adler & Sullivan, will occupy the space now filled by the Union and Mercantile Buildings, fronting 100 feet on Washington street and 180 feet on LaSalle street. It will be thirteen stories in height, its roof being 172½ feet ab above the sidewalk, the owners of the ground having been fortunate enough to obtain a building permit when they first contemplated the erection of the building, nearly two years ago, before the agitation against high buildings had begun. The accompanying cut shows the treatment of the exterior. It will be executed entirely in stone or terra cotta, light blue or buff in color. The main entrance on La Salle street has a clear opening of twenty-three feet. The Washington street entrance has an opening of eleven feet. 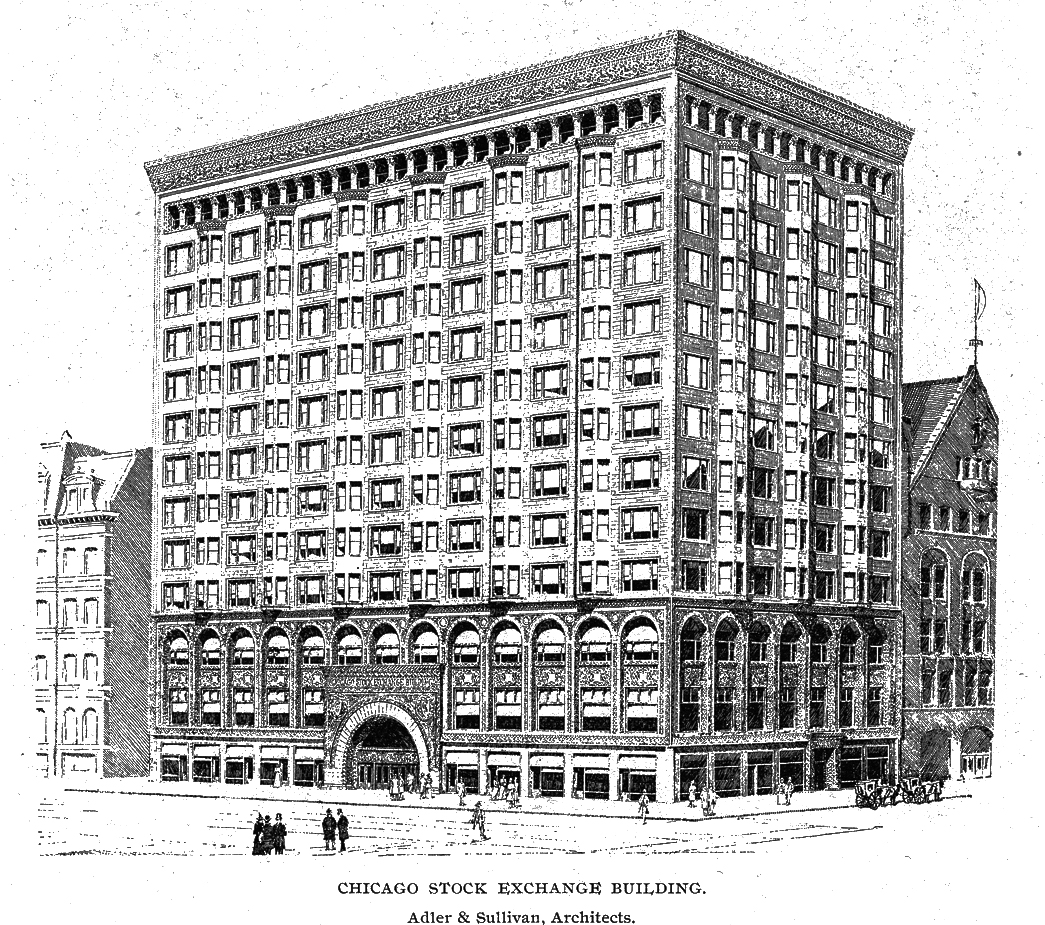 The rooms on the ground floor are intended for the use of brokers. The Stock Exchange will occupy a room 10×100 feet at the south end of the main floor, extending through two stories. The Exchange Hall will be lighted from the east and south by large plate glass windows and also by a skylight extending all around the room. The rostrum for the caller will be on the north side, and the gallery at the west end. Under the gallery will be the Secretary’s room, coat-room, settling-room, etc. The remaining of the main floor and as much of the floor above the same as as is not occupied by the principal part of the Stock Exchange will be used by banks and brokers. The ten stories above will be occupied by offices, 400 in number.

A peculiar feature of the arrangement of this building, which has been determined upon by the owners, will be that each story of offices will have an individual arrangement and subdivision of its own, each being adapted for a different kind of occupation. It is hoped by this means that tenants can be better satisfied and that the tearing out out and rebuilding of partitions and of heating, plumbing, and light apparatus, so characteristic of Chicago office buildings, will be to a great extent avoided. The top story will be divided into three immense rooms, each without a column. This will be admirably adapted for the use of corporations and firms employing large clerical forces. 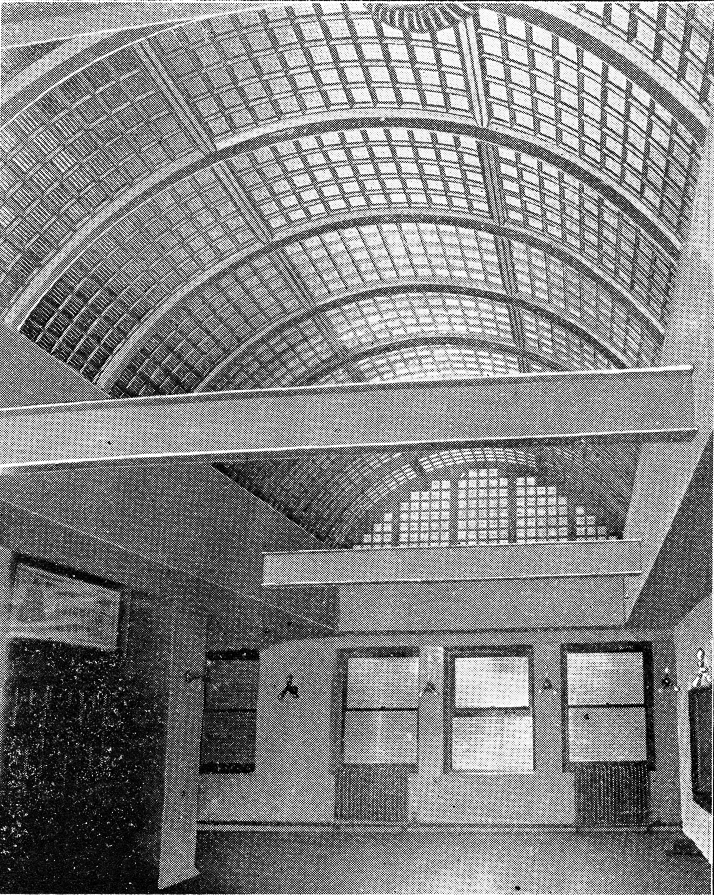 Another distinctive feature of this building will be the means adopted for the admission of light to the offices. On the south side of the building, immediately above the Stock Exchange, all of the offices except the front tier will recede thirteen feet from the line of the alley which bounds the building on the south. As the west line of the property abuts against the internal court of the Herald Building, this fact will be taken advantage if and the Herald Building court, which measures 32×60 feet, will be extended into the body of the Stock Exchange in the form of two courts, each measuring 28×55 feet. By this means there will be nearly 200 feet of external exposures of offices to this large court, forming the Herald space, the largest light court in the city and keeping the offices well lighted and yet free from the dust and noise of the street. 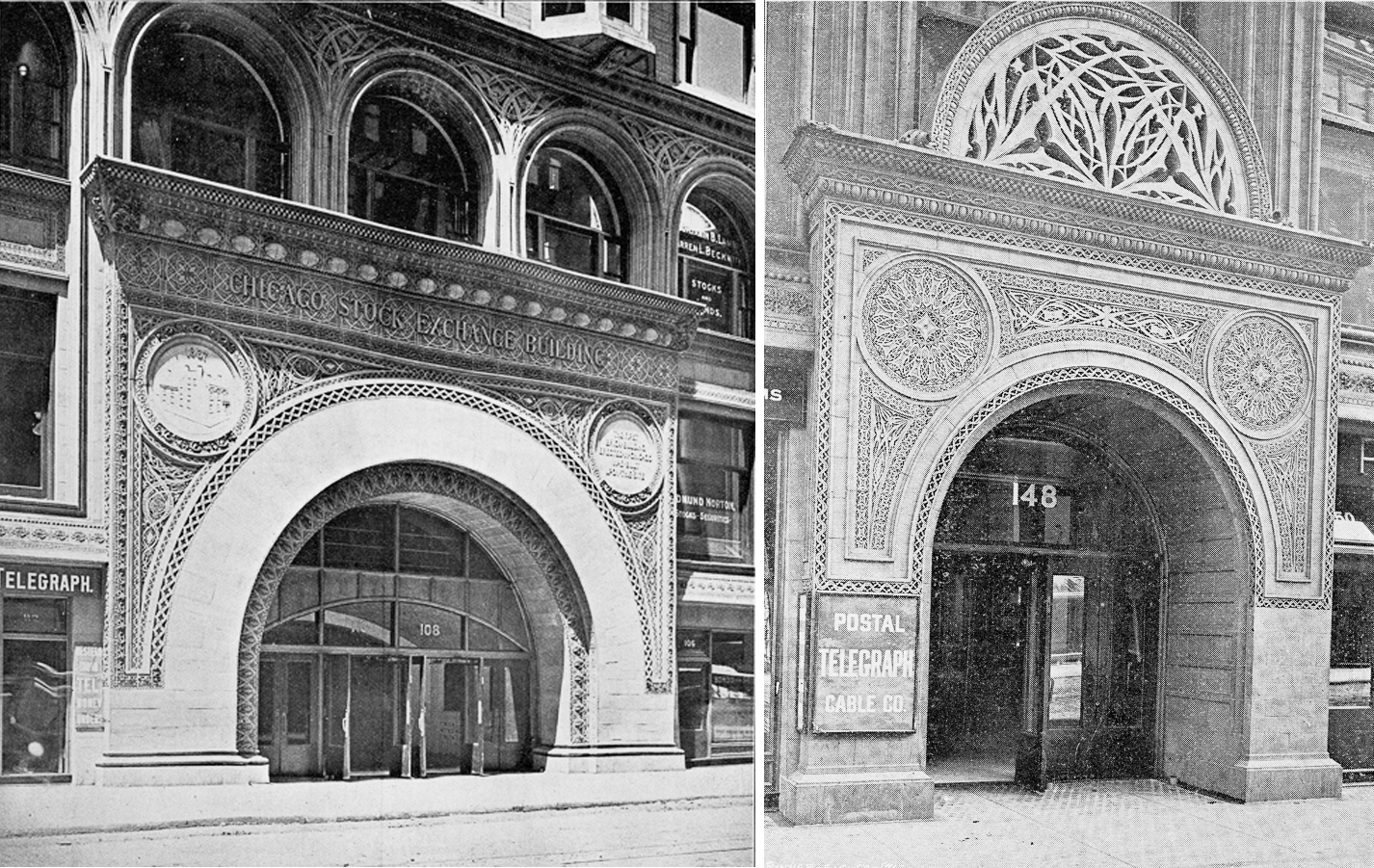 All the windows throughout the building will be filled with plate glass; all stairways will be of marble; all halls and corridors will have marble wainscot and mosaic floors, while all of the rooms will have concrete and mosaic floors, with a view of banishing from the building as much as possible everything combustible. The question of substituting for wooden doors and finish aluminum or other light metal is being carefully considered. Every room throughout the building will be heated by steam and will have a hot and cold water supply. Preparations are being made for the location of vaults wherever tenants may require them. In short, no effort and no expense will be spared where necessary to make the model office building of the world.

A peculiar interest attaches to this building site. Upon it in 1837 P. F. W. Peck built the first brick house erected in Chicago. It was used for many years as the family residence of the Peck family, and in it Walter L. Peck was born and passed his early childhood. The building remained until 1868, and was used during the latter part of its life as a police station. It was then demolished to make way for the Union Building, which, after its great destruction in the great fire of 1871, was replaced by the present structure. 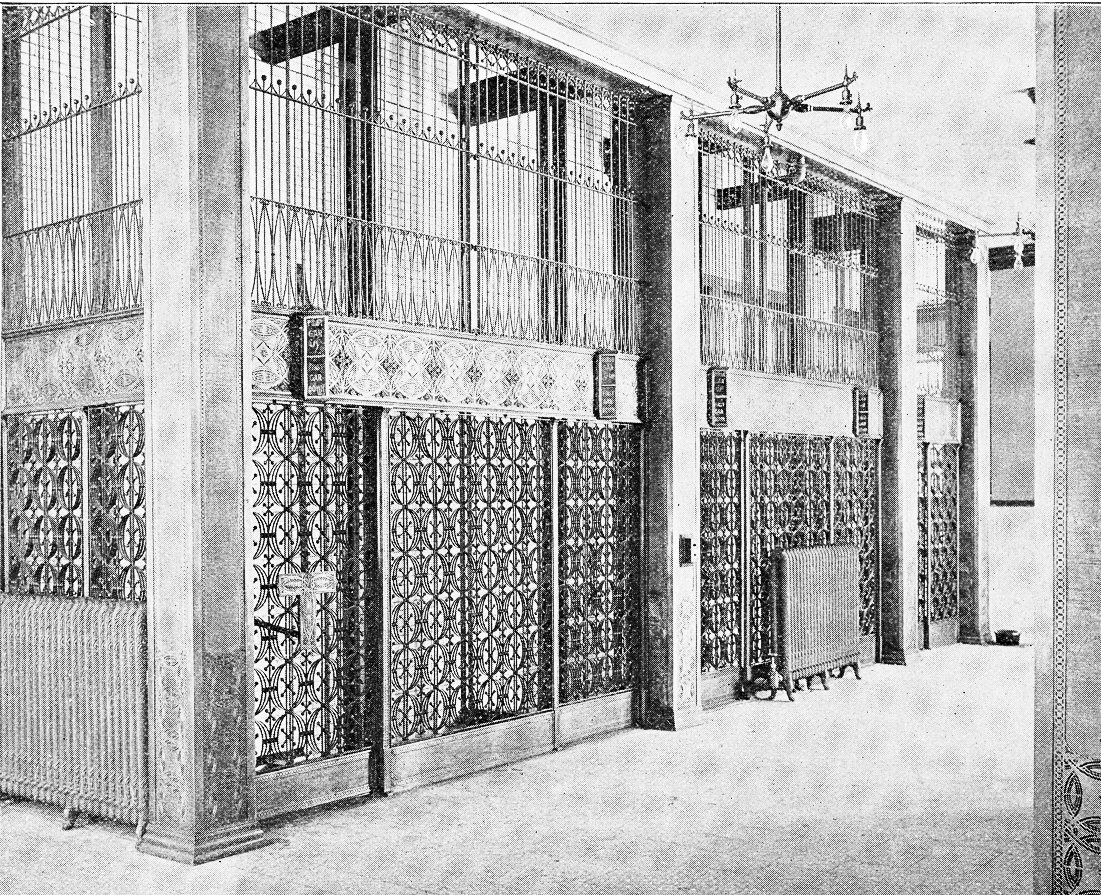 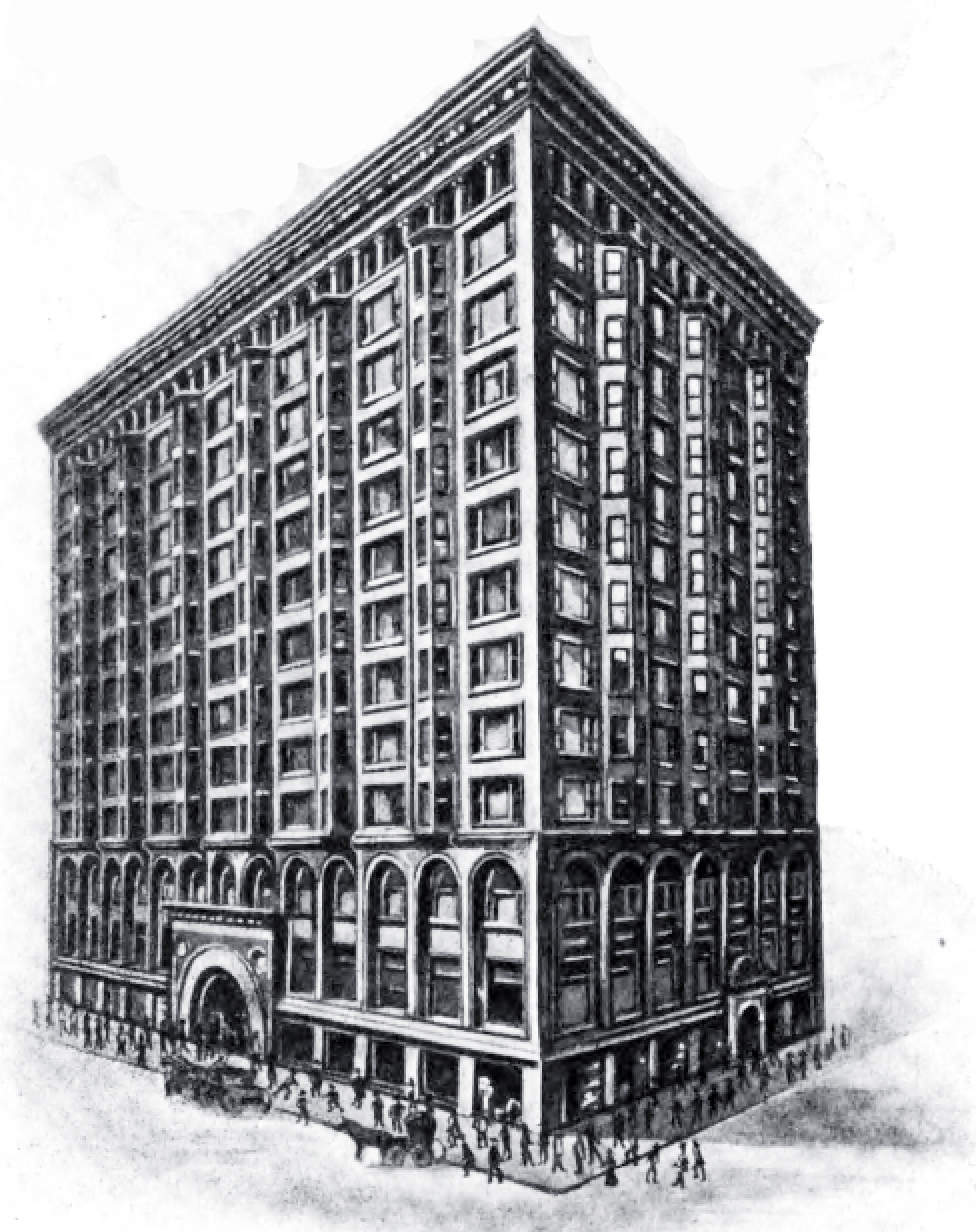 Located in the very heart of the business center. Diagonally opposite the Court House and City Hall. Convenient to all transportation lines. Entrances: La Salle Street, Washington Street. Calhoun Place. Specially desirable for lawyers, real estate, insurance, stock brokers. etc. Constructed upon the most modern and approved plan. Thoroughly fireproof. Finished throughout in marble, mosaic. mahogany and oak. Walls and ceilings painted—no calcimine used. Ten large elevators equipped with automatic signals furnish superior service. Janitor service of the best; building maintained at a high standard. Offices large and comfortable. having excellent natural light and ventilation. Supplied with hot and cold water. Electric light fixtures so placed as to suit the convenience of tenants. All steam and water pipes and electric wires concealed. Every means has been adopted for the comfort, convenience and accommodation of tenants. and every effort is made to render most efficient service. 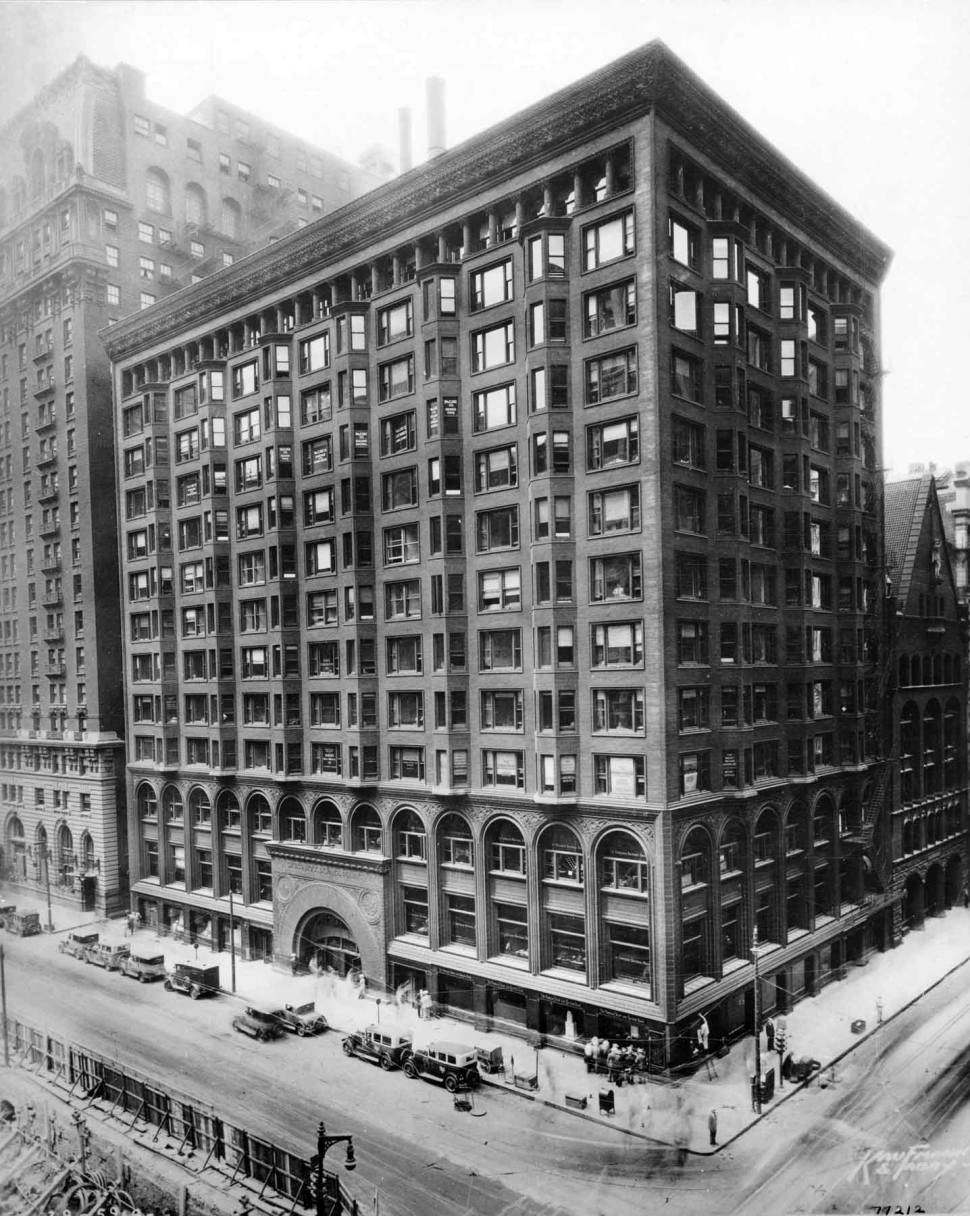 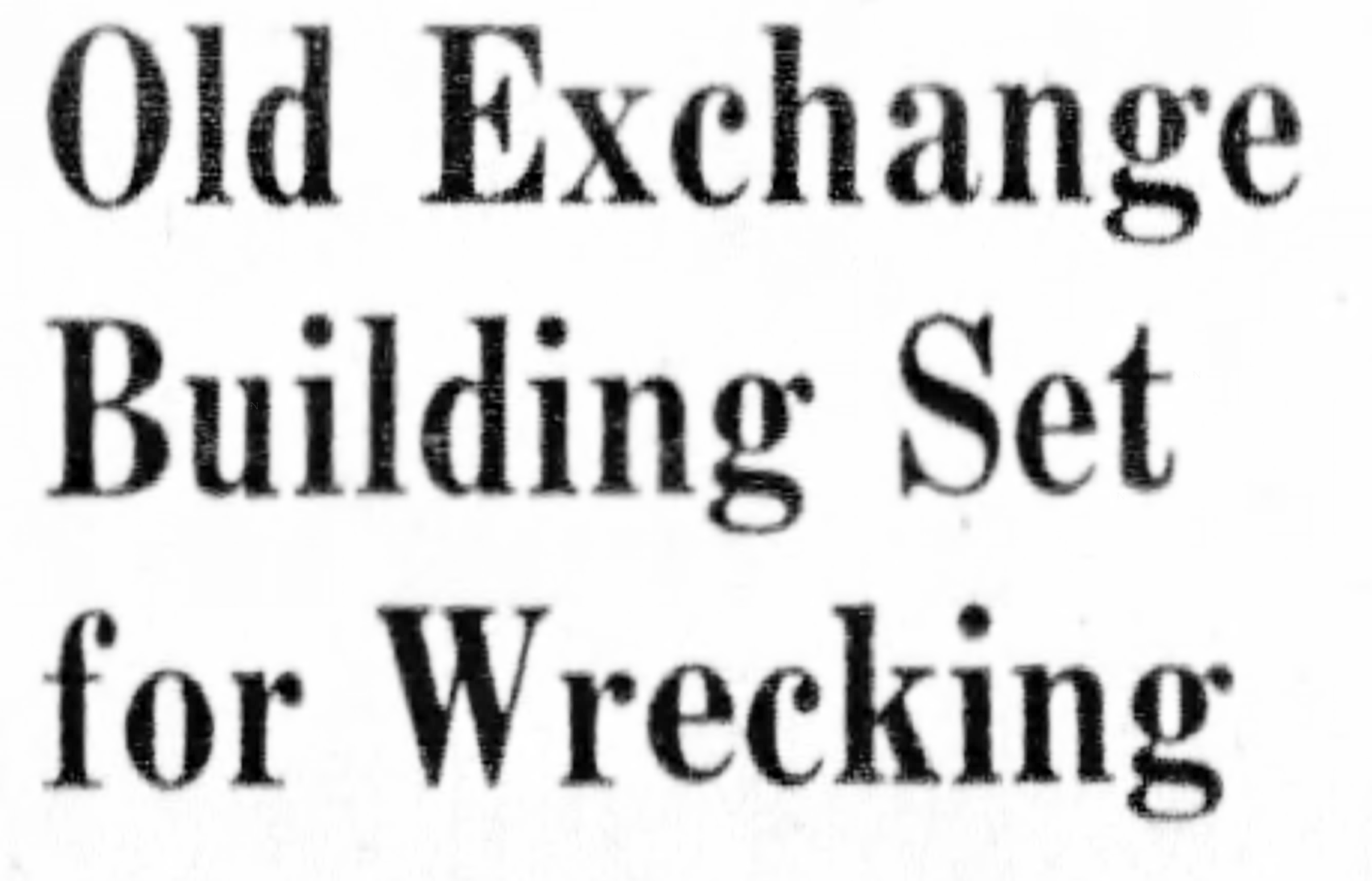 The 77-year-old Chicago Stock Exchange building, 30 N. La Salle st., hailed by some conservationists as one of the finest examples of a commercial builsing designed by Louis Sullivan and Dankmar Adler, will be torn down this summer, developers said yesterday.

The 30 North La Salle Street Partnership, a group of real estate developers headed by Jerome Whiston, president of Frank M. Whiston & Co,., will put up a 43-story office building on the site.

The $54 million structure will be built by Tishman Construction Co. It was designed by Thomas E. Stanley, a Dallas architect.

A big wooden mallet slammed down hard on the mahogany rostrum, sending sound waves crashing off the towering, coffered ceiling. Immediately, the formally dressed men on the floor, pencils and pads in hand, begun scurrying about, shouting, waving their arms, giving hand signals to clerks.

It was 9 a.m. on May 1, 1894, the Chicago Stock Exchange’s first full day of trading on the second floor of its new building at Washington and La Salle streets.

It was a bullish market and Chicago was a bullish town, population 1.3 million and bursting at the seams. Excitement ripped through a crowd of mustachioed brokers as a clerk atop a 10-foot ladder chalked up the first transactions on one of two mammoth blackboards, one for the New York exchange, one for Chicago’s. Clerks dashed to and from telephones and telegraphs along a wall, taking orders and keeping tabs on breaking news.

While brokers calculated what to buy or sell at what price, clusters of on-lookers, including a few women, chatted in in the elegant balcony overlooking the 7,000 square-foot trading arena. They gazed admirably at the immense ceiling, its detailed stenciling lighted like a movie marquee, by a string of small yellow lights. Music from a gold-plated piano in the balcony blended with the din rising from the floor. The tickertape chattered incessantly.

At 3 p.m., the giant mallet banged onto the desk, and the secretary bawled, “No more!” The stock market was closed for the day. 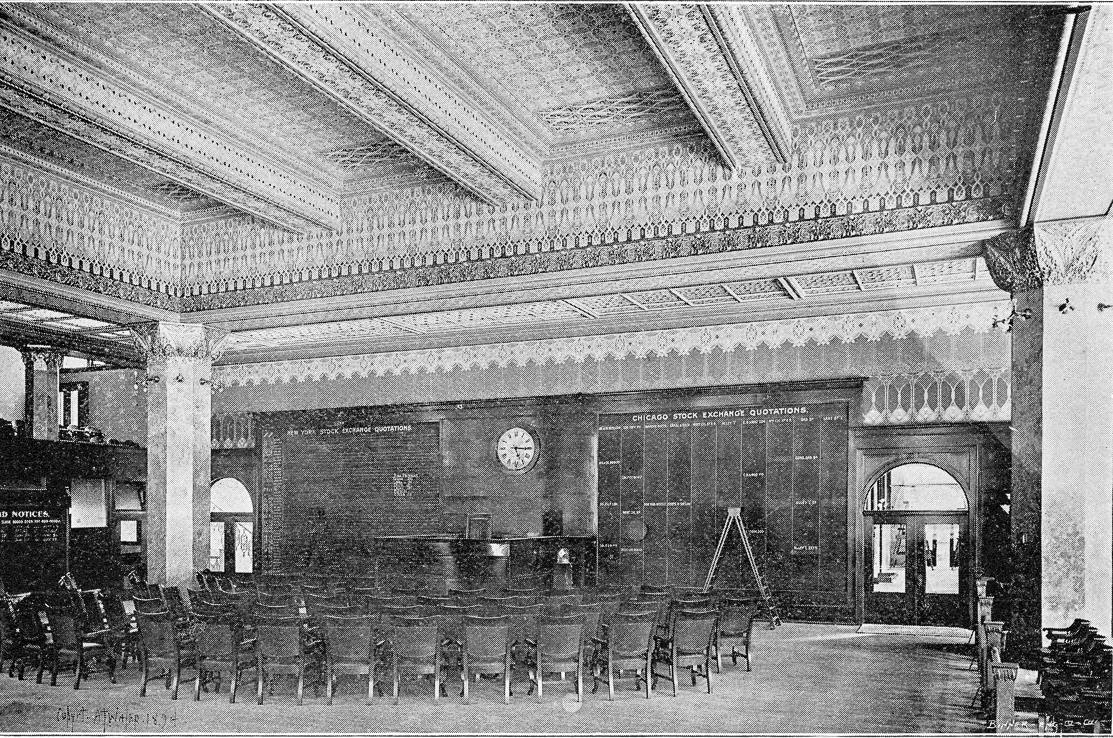 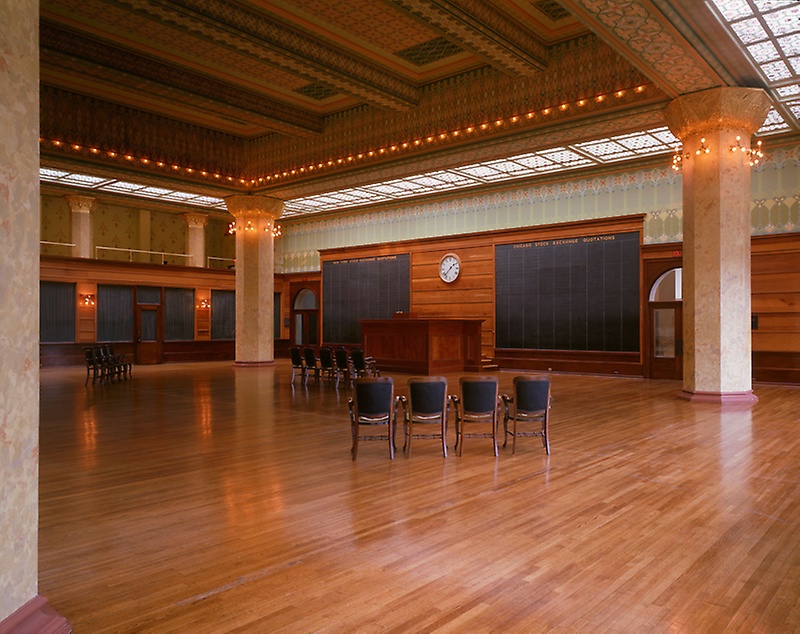 IT HAS PROGRESSED since then, of course. Piercing bells now signal the market’s opening and closing, stock quotations race by on long electronic screens, and computers keep track of nearly everything.

Progress took its toll on the stock exchange building five years ago, when it crumbled under the wrecker’s ball. But the trading room still stands, recreated in the Art Institute’s east wing and open to the public beginning Friday from 10 a.m. to 5 p.m.

Even whispers could be heard distinctly at distances in the immense room, one of the last designed by the famous architectural firm of Dankmar Adler and Louis Sullivan. Adler, the acoustics and design expert, built steel trusses above the trading room’s ceiling, transferring the weight of 11 upper floors to the four columns of the trading room. Sullivan spread lavish ornamentation, his trademark, throughout; intricate, 52-color stencils, massive goldleaf capitals, and 400 sky-lighted stained glass windows framing the ceiling.

In this magnificent room, the stock exchange entered “full manhood,” as an observer of the room’s opening day ceremonies noted. The exchange was middle-aged, 43 to be exact, when it moved out of the building in 1908, leaving it to the Foreman’s Brother’s Bank. The bank promptly partitioned the room, put up tellers, removed the blackboards, covered the wood floors with marble, and painted over much of the stenciling. The bank planned to move in 1929, but abandoned that plan and the room when the stock market crashed.

THE ROOM stood empty until Bell Savings and Loan rented it in 1940. It changed the room further, hanging a 10-foot acoustical ceiling so air-conditioning could be installed, and painting over the remaining stencil.

Decades later, two Chicago landmark commissions offered the building landmark status, but the owners refused because they wanted to raze the building. The city council rejected a final proposal to save the building.

The wrecking company had just begun its job in 1971 when architect John Vinci saw the room whole; the balcony unblocked, the 10-foot ceiling gone, the partitions removed, the stained glass windows unboarded. Vinci was so impressed that he convinced the Art Institute to salvage more than just a few scraps of ornament.

“I was sick and tired of saving bits and pieces,” says Vinci, who masterminded the re-creation. “When you’re going to save something, you should save something that has meaning.”

Using all the faded stencils, chunks of plaster, and other scraps salvaged would make the room look like a “patchwork quilt,” says Vinci, so the room was re-created with the help of photographs.

SOME OF THE original room has survived in the new, however: two goldleaf capitals, a stencil strip 37 feet long by 89 inches wide, and 300 of the 400 glass windows. The rest, down to the mottled-marble look of the scagliola on the columns, has been faithfully reproduced at a cost of about $700,000.

The stock exchange already had been moved when Norman Freehling joined it in 1928, but he still loves the old room. At 72, he is one of the oldest active brokers on the Midwest Stock Exchange (changed from Chicago Stock Exchange). Freehling took a peek at the re-created room a few days ago and pronounced it “just beautiful. Why would anyone rather have a new room? I’m happier looking at the old things,” he says.

EVEN THE EXIT signs are from the period, cast in bronze with old-fashioned lettering and a red, lighted background. But they didn’t come easily.

“The city insisted on red letters on white plastic,” says Vinci with disgust. “And I refused to have them in here. We had to use as lot of clout to make them change their minds.”

But, at least the fire department can take solace in the knowledge that the old-time exit signs are better than what the original room had, says Vinci.

The original room had no exit signs at all. 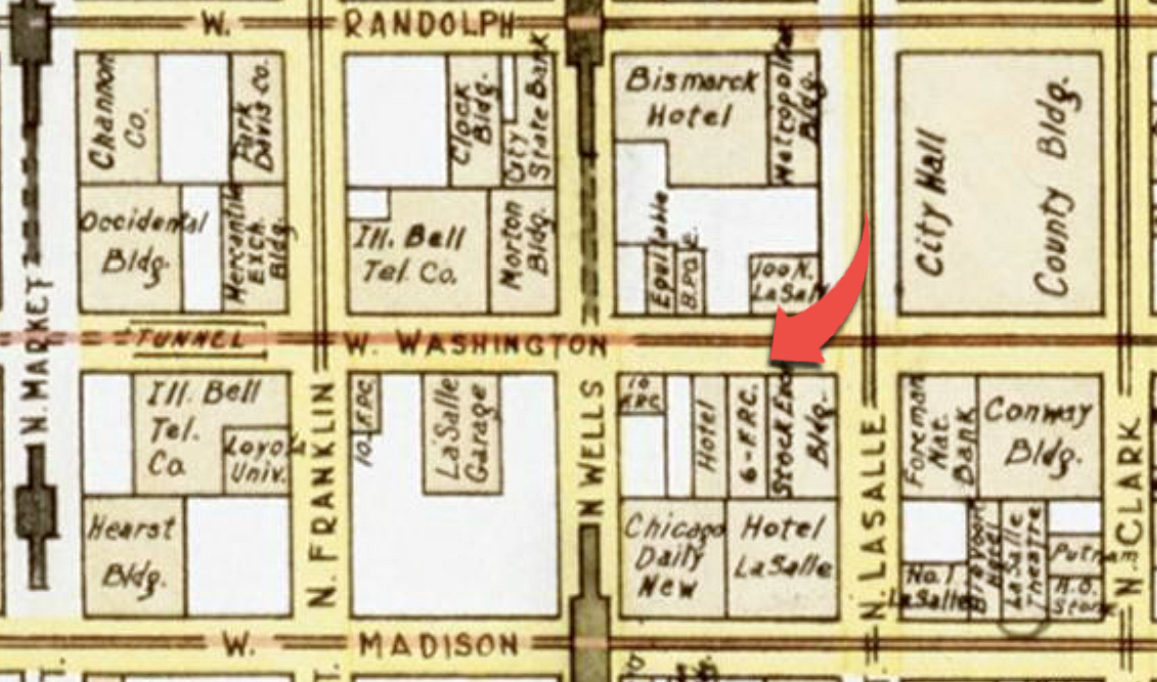