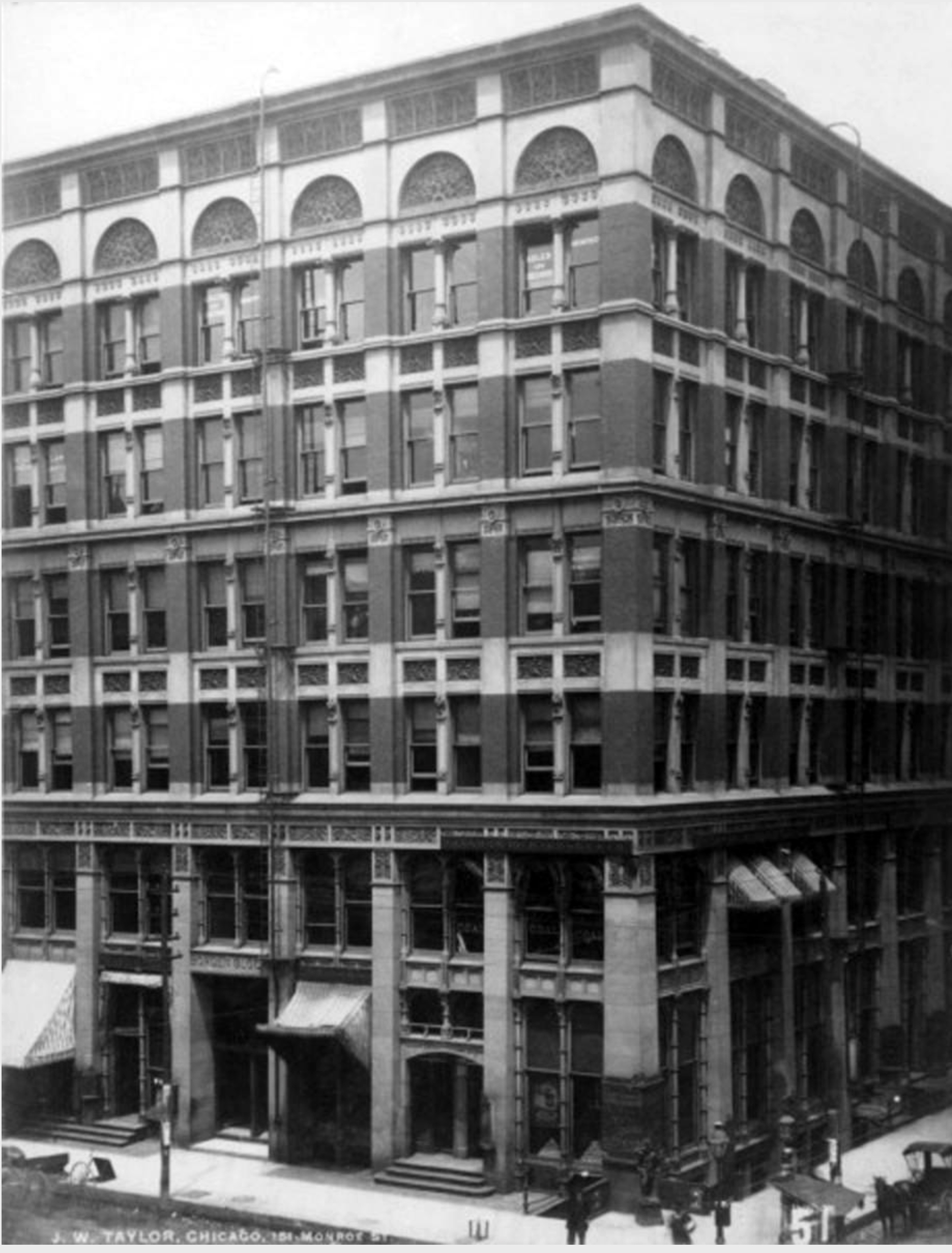 THE BORDEN BLOCK.
Ground has been broken for the erection of the Borden Block at the northwest corner of Randolph and Dearborn streets. The building is to be devoted entirely to office purposes, and will be six stories and basement in height. The main entrance is to be at the centre of the Randolph street front, and will be level with the sidewalk. The main entrance-hall is eleven feet in width and leads directly to the elevators, two in number. A wide stairway also starts this hall, and after a landing for the first story offices, follows around the elevator-shaft between the several stories. There will be an inner court 28×31 feet, which will afford abundant light to all rear offices; and, in addition, there will be a large skylight over the elevator-shaft, and transom-lights and glass-paneled doors to each office, rendering the interior of the building light in every part. The offices are to be heated by steam, and ventilated through fireplaces, of which there will be one in each office. There will be four stacks of double vaults, running from basement to roof. The offices are grouped around the elevator shaft in such a manner that the signs on nearly all the doors may readily be seen from the elevators, and in addition a bulletin-board will be located in each story directly opposite the elevators.

The materials of construction will b e Berlin sandstone, St. Louis processed brick, terra-cotta, and cast-iron for the interior; the windows will be filled with plate glass, and the cornice will be of stone. Fior the interior wooden joists will be used, supported on iron pillars and beams. The floors throughout will be of hardwood, and the main entrance-hall will be laid with a floor of incaustic tiles.

The dimensions of the building are 80 feet front on Randolph street and 90 feet on Dearborn., The height from sidewalk to top of cornice will be 103 feet. Mr. D. Adler is the architect of this building. 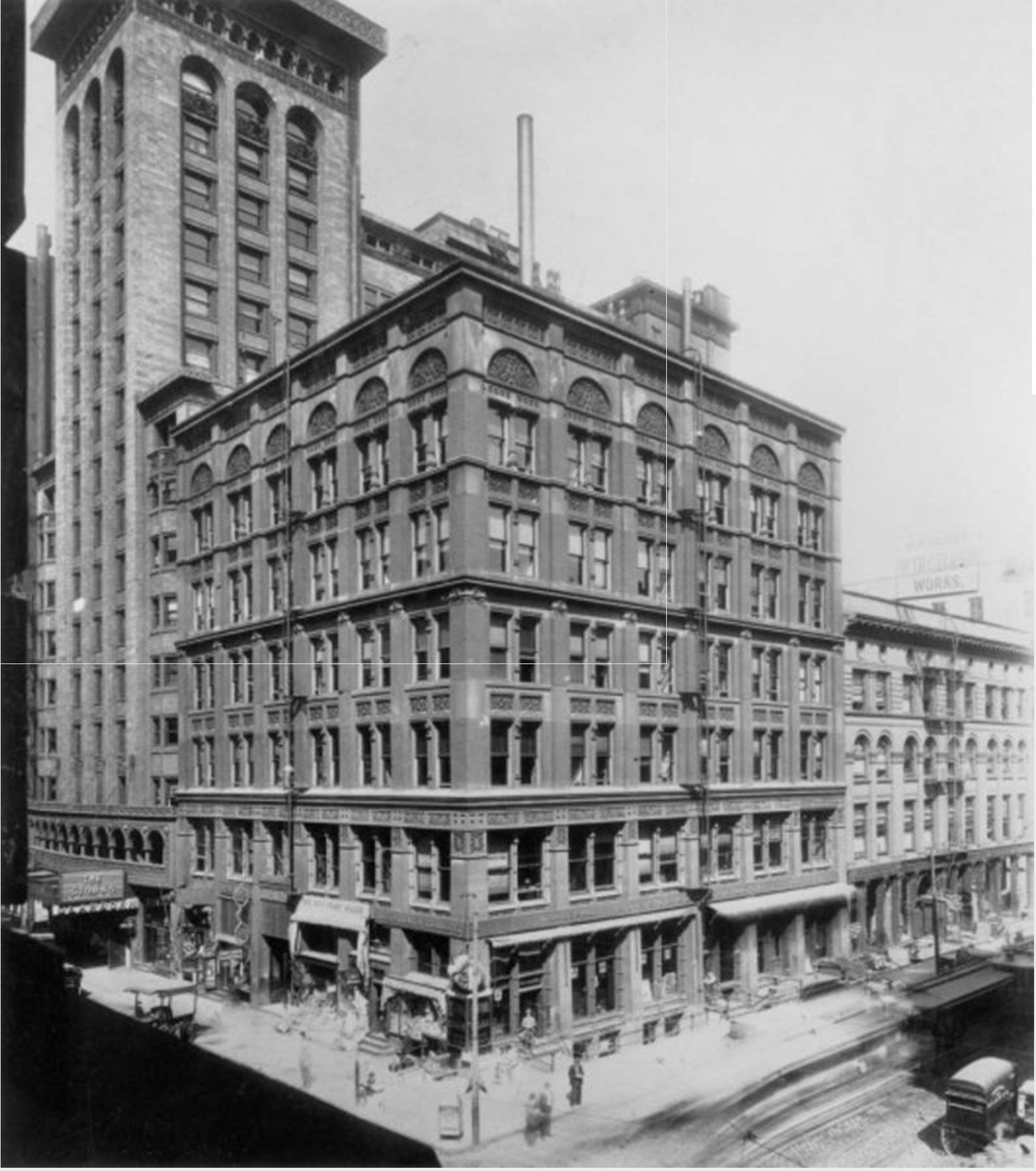 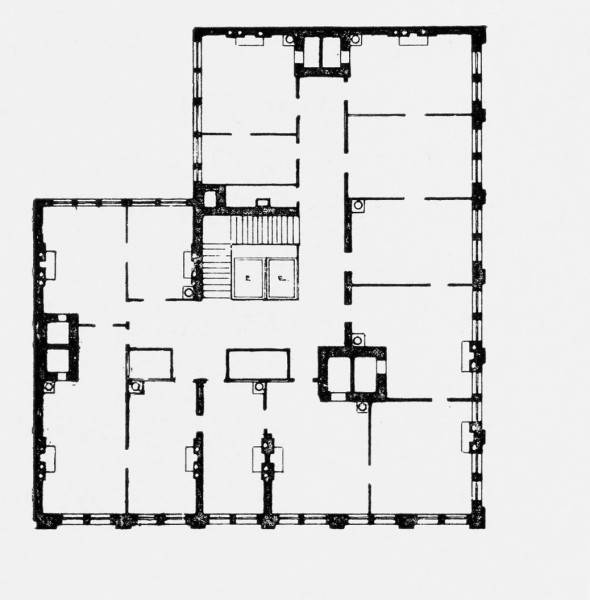 DEVELOPMENT OF CONSTRUCTION.
A History of What Has Been Done In the Building Line in Chicago—Remarkable Succession of Improvemonts—Genius of Dankannr Adler.

Upon the occasion of the recent annual meeting of the Illinois Chapter, American Institute of Architects, marked by the presentation to the chapter of a portrait of the late Dankmar Adler, a pioneer architect in Chicago, Louis H. Sullivan, one of the best known in the country, whose genius is perpetuated in some of Chicago’s largest buildings, presented an appreciation of the late Mr. Adler, which is really a history of architecture in this city. The difficulties encountered by the early builders of Chicago, which bore fruit in the form of new methods of construction, and the formation of the present-day substantial type of construction, are reviewed by Mr. Sullivan and should prove of considerable interest to the younger generation of architects and builders. His address is as follows:

To recall Dankmar’s contributions to his profession, I will make a little sketch of the growth of architecture since 1878 and up to the present time, from what was practically an inarticulate form of building to the present highly scientific equipment. I believe it will be interesting especially to the younger members of the professon who did not live through those days. Our first serious joint undertaking was the Borden block at the northwest corner of Dearborn and Randolph streets. To understand just what that meant in construction at that time we must know a little of what the prevailing practice was prior to that. Ordinary buildings at that time were three or four stories high. Wall thicknesses had some traditional dimensions. I don’t know how they were arrived at, but one man had made in l873 a very important contribution to building construction. This related to foundations, and that man was Frederick Baumann. His work on pier foundations practically revolutionized the entire system by abolishing the continuous foundation wall constructed as if the same load was to be sustained throughout. That was a highly important contribution. Perhaps few of you understand that Frederick Baumann invented that system. Along about that time the average commercial building was built with an indefinite thickness of walls. If it was a three-story building, it would be about three feet; if it was going to be four stories, it would be about four feet, and if it happened to be five stories it was still more. As to the posts inside, they were very poor. Few cast iron posts were used and when cast iron posts were used they were about 12×12 for the first and lOxlO for the second, and so on up, and you would assume that about 2×2 would be all right for a twenty-foot span. The front of the building was a stone ashlar, four inches thick, a long slab backed up with brick. The top almost invariably was a galvanized iron cornice that was of the cheapest construction, little or no attention being paid to the wall supports.

New Devices After the Fire.
Immediately after the great fire, buildings had to be rushed up in a way to meet the general poverty, and the full effects of the panic of 1873 were reached about the time that Mr. Adler and I came together, and from that time on conditions began to improve, and they were beginning to recover from its effect. Prior to that time one or two attempts had been made at what was called fireproof buildings in Chicago. One of them was the old First National Bank. in which non-combustible material was used in making a so-called fireproof building before the Chicago fire. Then long afterward, about 1879. began the improvement in the plan of building foundations as demonstrated in the Borden block. The building actually had solid stone piers on isolated foundations, which was a great innovation. At that time no one went up to exceed eight or ten feet. That was Mr. Adler’s own contribution in planning a great improvement. Another innovation of that day was the carrying of plate glass entirely through a. building, and another was finishing entirely in hardwood. That meant a great deal more than we of today understand. The result was that the building was rented six weeks before it was finished and it did us much good professionally. About 1879 we completed the Central Music Hall, which was a wonderful success in all respects so far as its acoustic properties were concerned. About the time the Borden block was completed, Mr. Borden had the old Foley billiard hall turned over into the Grand Opera House, spending about $60,000. I then discovered what Mr. Adler knew about acoustics. I did not know anything about them and I did not believe that anybody else did. That is the popular impression today. that nobody really knows anything about them. I found out the extent of Mr. Adler’s knowledge in connection with that building. It was not a matter of mathematics, nor a matter of science. There is a feeling, perception. instinct, and that Mr. Adler had. Mr. Adler had a grasp of the subject of acoustics which he could not have gained from study, for it was not in books. He must have gotten it by feeling. I absorbed that very quickly and there has not been much occasion to learn it since, be cause the subject was covered. The Grand Opera House was immediately a great success. It was quite a luxurious theater for that day and quite a wonder in architecture. You must remember that in those days the telephone was practically unknown: electric lights were practically unknown; the type writer did not exist; blue printing was not known, and even the hektograph process was not known. All reproductions in an architect’s ofiice had to be made by tracing. and after those tracings had been on the job for a while they were not very pretty nor very useful.

About the same time we built a house that John Borden is living in near Thirty-ninth street. It was a solidly built, well equipped house. standing there now, and the owner is still living there at the age of 94.

The Modern Chicago
That time may be said to be the beginning of a new era of building in Chicago. It is difficult for us to understand, especially the young members, the comparatively crude conditions and the limitations of those days, the manner in which foundations were laid, when the water-balanced elevators for raising were of the horizontal type of hydraulic elevator. They were the beginning. Then, buildings
were not fireproof. They were plaster and wood lath, but there was an attempt made at fireproofing. Plate glass at that time was imported from Belgium and France. It was not manufactured in this country. There was not in this country what is now known as a steel structure. Iron was very high in price. Then came the fireproof structures. Peter B. Wight at the time was in the business of furnishing fireproof building material. The building now belonging to Martin A. Ryerson and occupied by A. H. Revell & Co. was the first building in which commercial fircproofing was begun on iron columns. iron girders. wooden joists, but those columns were surrounded with fire proofing material supplied by Mr. Wight. The ceilings and floors were deadencd. It showed the efficiency of that age in fireproofing. The fireproofing in that building onlv amounted to something like $60,000 to $75,000. That was a thoroughly built and solid structure and it was a marked improvement on anything existing at that time. Then came a series of buildings for Mr. Ryerson. six in an interval be tween 1881 and l884.

Meanwhile. I was developing a little technical knowledge myself. Then came some other theaters, a great many alterations and a great many of those old buildings had to be held up and put into shape. Thcrc first came the alteration of the old McVicker’s Theater. I think, in 1885. There was spent about $35.000. At that time, I believe, was made the first decorative use of the electric lamp. It was a little innovation of my own, that of placing the lamps in a decoration instead of clustering them in fixtures. but even then the installation of an electric lighting system was primitive to the last degree. The wires were bedded in plaster. The lighting conduit was not known. The dynamos were run by little primitive engines. The boilers were of the tubular type. The original wires were torn out when McVicker’s was rebuilt. Mr. Adler wanted to have some offices put in when the theater was rebuilt. He had the notion that some offices might be carried over that theater, and, as far as I know, that is the first time that thing was done. Two stories of ofiices were carried by trusses over the theater. The fire came in a day, in the midst of a very cold winter, and the question was how it could be reconstructed during that time. Mr. Adler got up a very clever scheme of building a housing of wood under which work could proceed, and that was adopted and carried out successfully. Mr. McVicker thought he would like a ventilating system. We put one in for him. He seemed to take a great interest in ventilating at that time. We put in a system that cost $6.000. Mr. McVicker thought it would cost him about $1,000. This simply gives you an idea of the primitive days out of which we have grown and the extraordinary progress represcnted by this great development that has taken place since l880—only 36 years—with the series of commercial buildings which have been steadily improving. 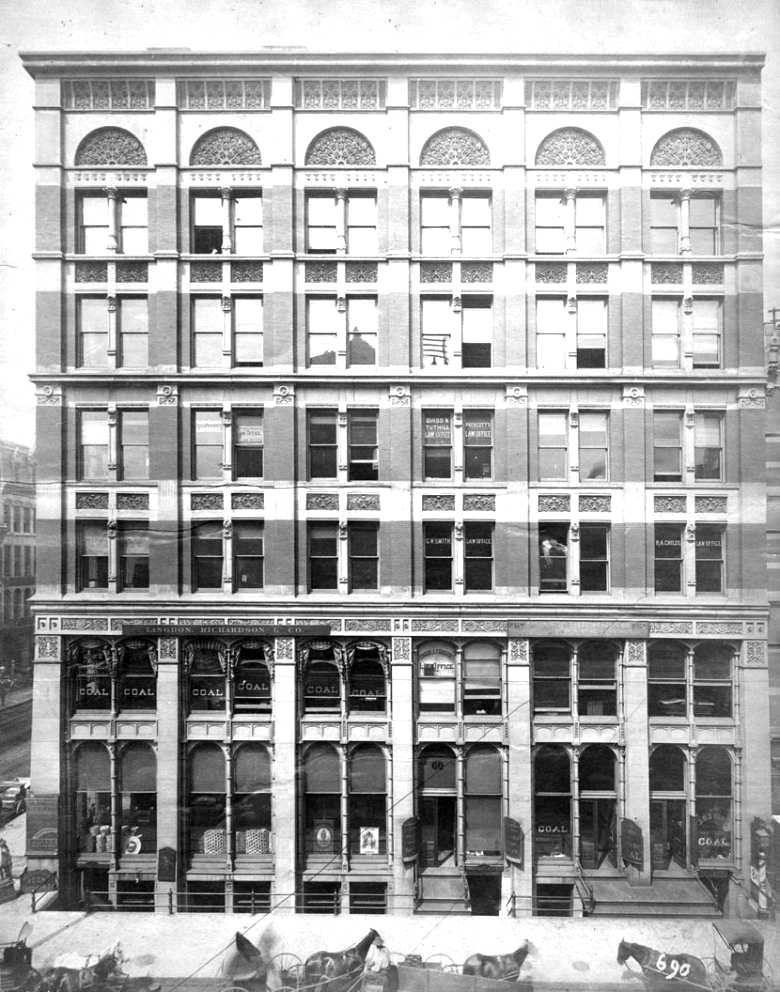 A. H. Woods of New York, theatrical manager and producer, tomorrow will take possession of the Borden block at the northwest corner of Randolph and Dearborn streets, and the Wells estate property in the rear, which he has leased from the Marshall Field estate, and which he will improve with a theater (Woods Theater) and an office building. 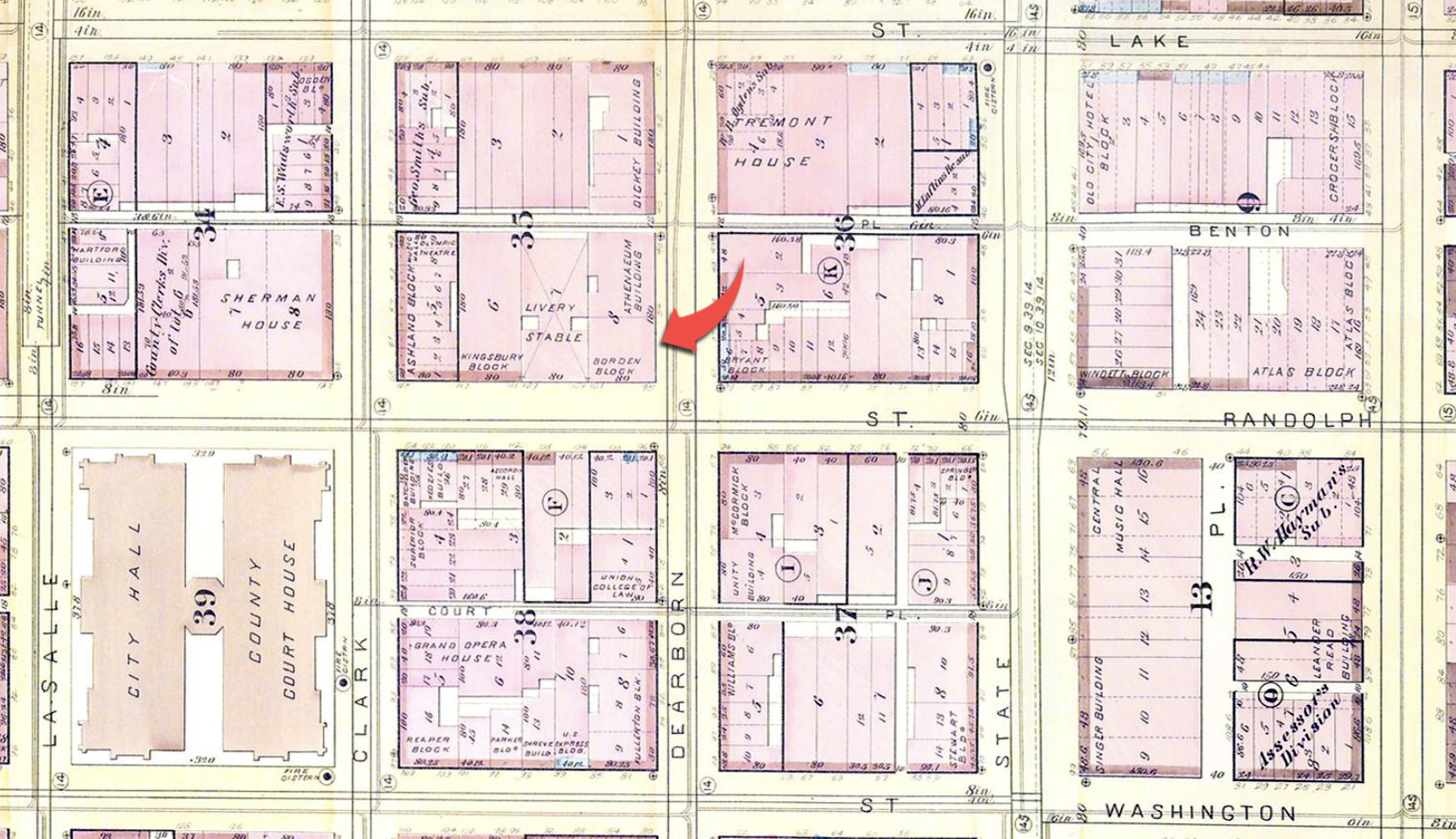