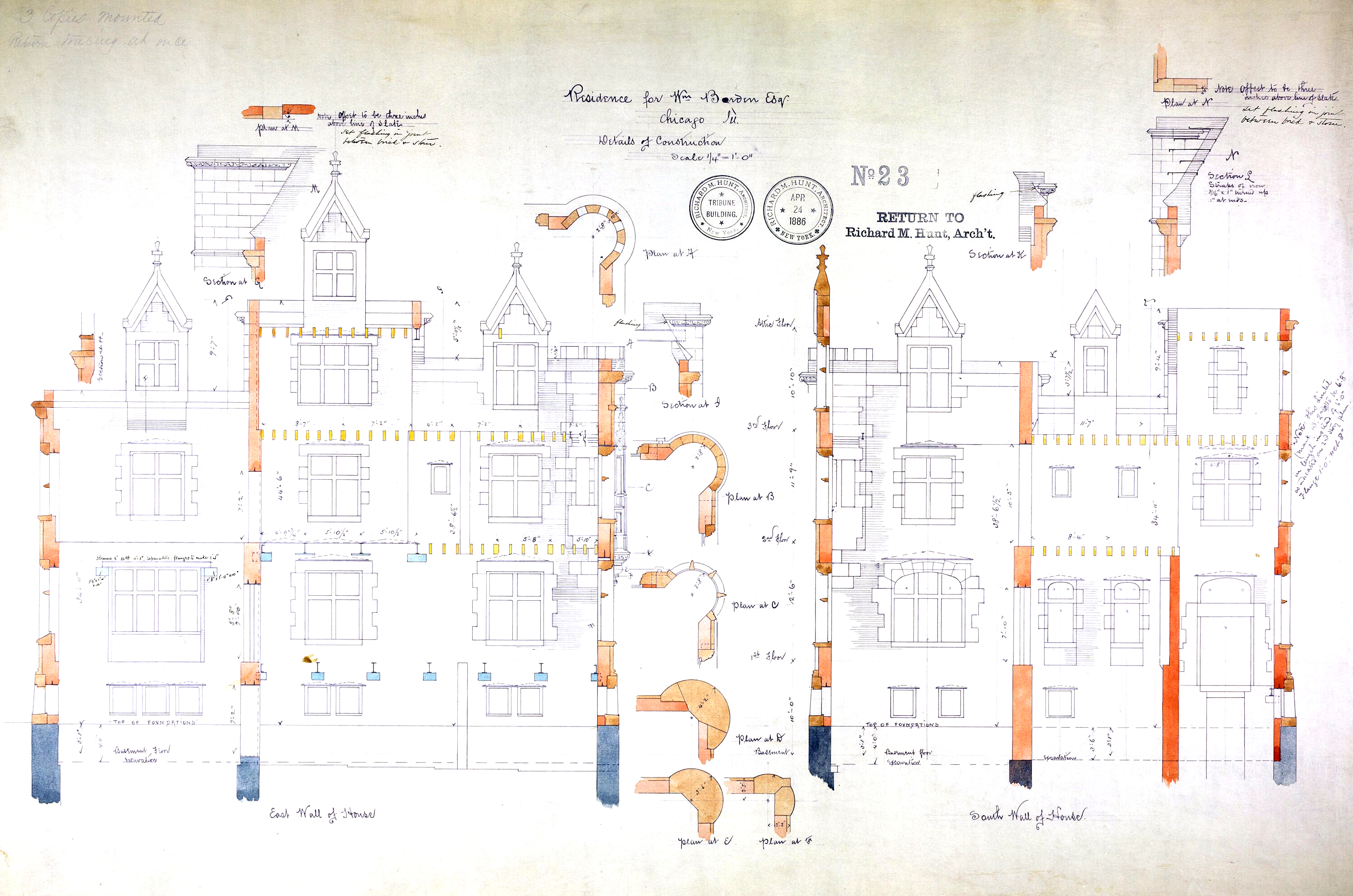 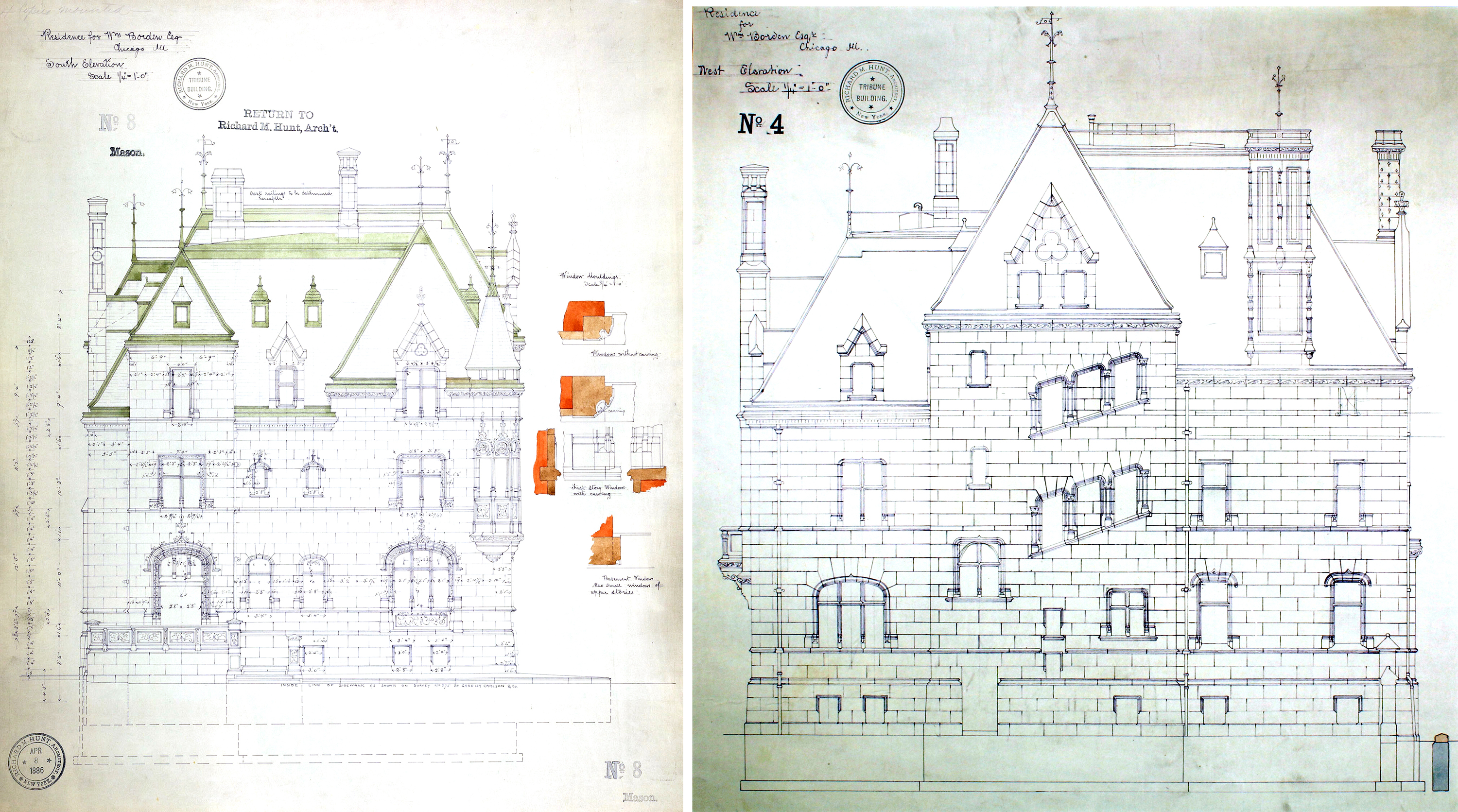 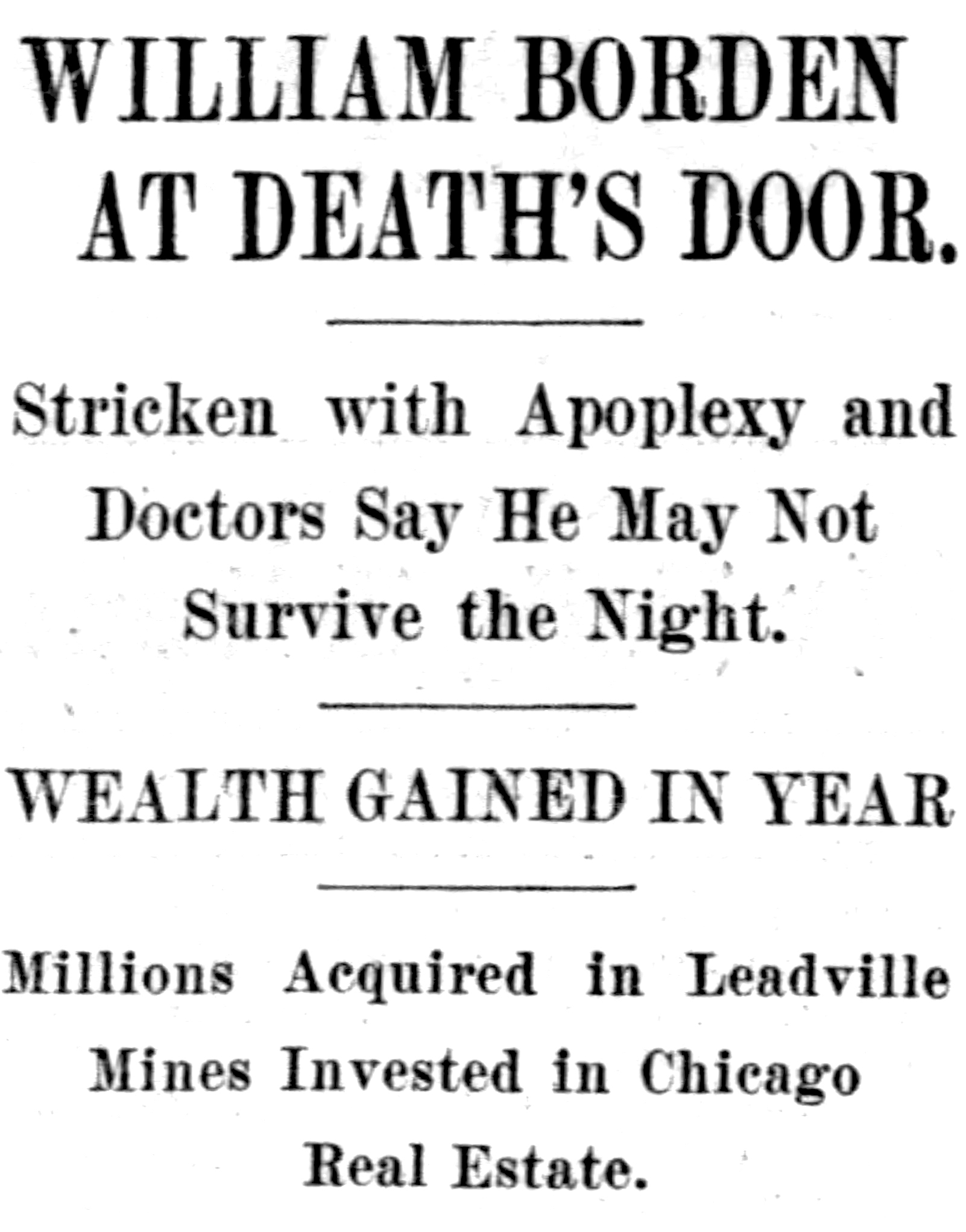 William Borden, whose real estate holdings are among the largest in Chicago, including the Borden Block and the Grand opera house, is lying at the point of death at his residence, 89 Bellevue place, as the result of an apoplectic stroke.

Since Sunday morning Mr. Borden has been unconscious and his physicians have resorted to oxygen in the hope of prolonging his life beyond the present crisis. The attack of apoplexy came without warning while Mr. Borden was at his residence. He is 53 years old and previously enjoyed robust health.

Realizing that tyhe condition of the patient was grave, consultation of physicians, including Drs. Billings, Stearnes, Chew, Elliott, and Stevenson, was held on Sunday. Another consultation was held yesterday after Mr. Bolden had failed to improve. A statement was given out at the residence early in the morning that Mr. Borden was still alive, but unconscious.

Wealth Gained in a Year.
The downtown real estate holdings of Mr. Borden amount to nearly a million and a quarter dollars. His father, John Borden, who resides at 3947 Lake avenue, also is wealthy. Father and son together are said to own real estate in the downtown district valued at more than $3,000,000.

The wealth of the Bordens was acquired in a single year of remarkable success. The foundation of the fortune was laid in western mining fields and later was invested to advantage in Chicago real estate.

William Borden, the son, was educated in this country, and completed his studies in Heidelberg, Germany. There he received a complete training in mining engineering. When he had learned all the German experts could teach him he returned to Chicago. Just about this time the Leadville mining fields were discovered. Borden interested Marshall Field and Levi Z. Leiter, who entrusted a small amount of money (about $20,000 each) to the young mining engineer for investment.

Young Borden turned his technical knowledge to such good account that in one year he made $4,000,000. One million went to Field, $1,000,000 to Leiter, while the remaining was divided between his father and himself. 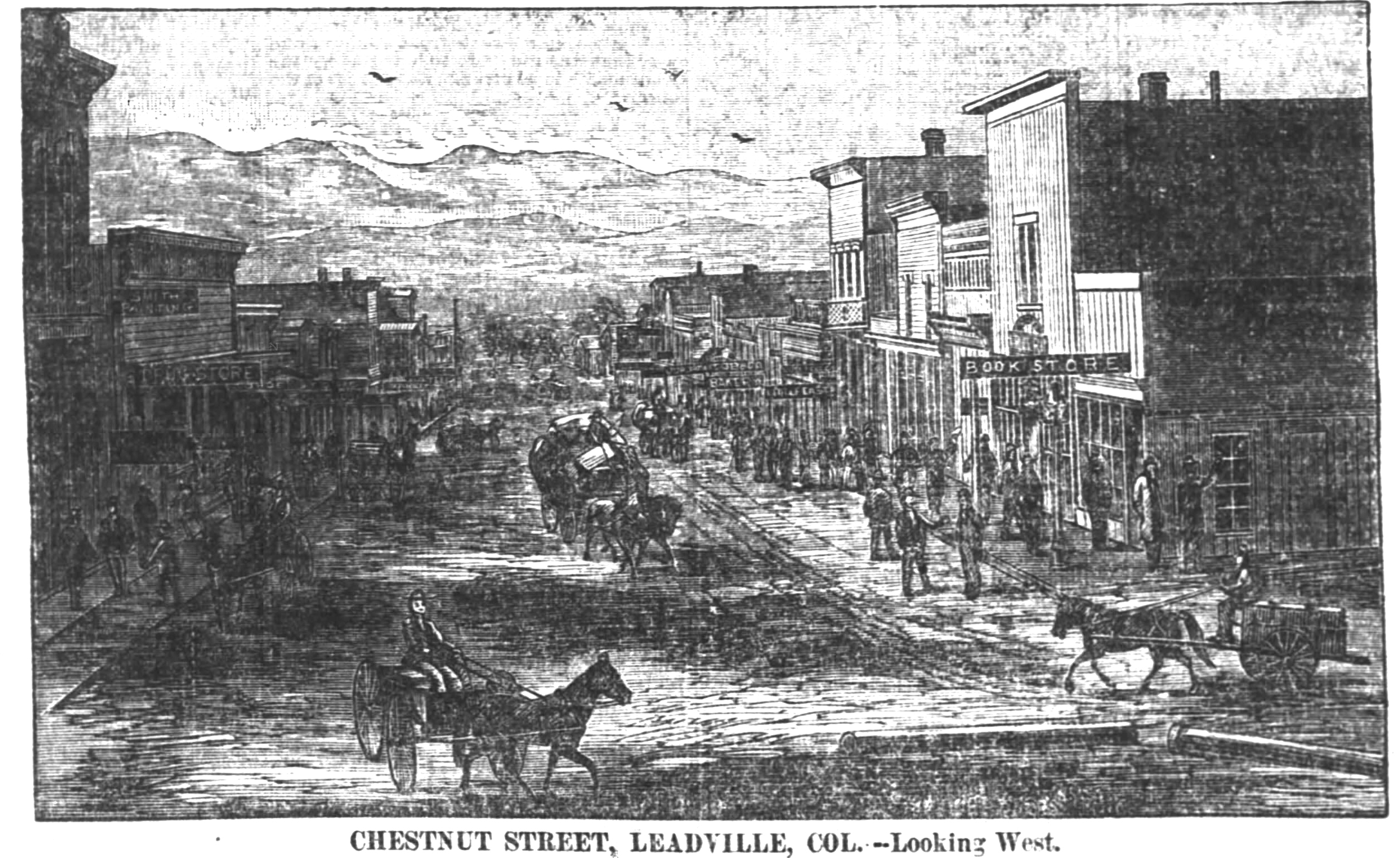 Graphic from the Inter Ocean, March 11, 1879. This is the mining town where Mr. Borden made his fortune. He documented his story in his book, Borden’s Leadville; a treatise on Leadville, Colorado, reliable information … containing the different routes, scenes of interest on the way, and one of the most accurate descriptions of Leadville and vicinity ever published in 1880.

Invest All in Real Estate.
Real estate values in Chicago at the time were at a low ebb, but the Bordens had faith enough in the ultimate development of the city to invest almost their entire fortune in real estate. Since then the values have multiplied many times.

Since that one year’s successful work in Leadville, Mr. Borden never has engaged in any business.

William Borden’s downtown holdings at present include the following:

In addition the Bordens also possess important holdings in the outlying districts. 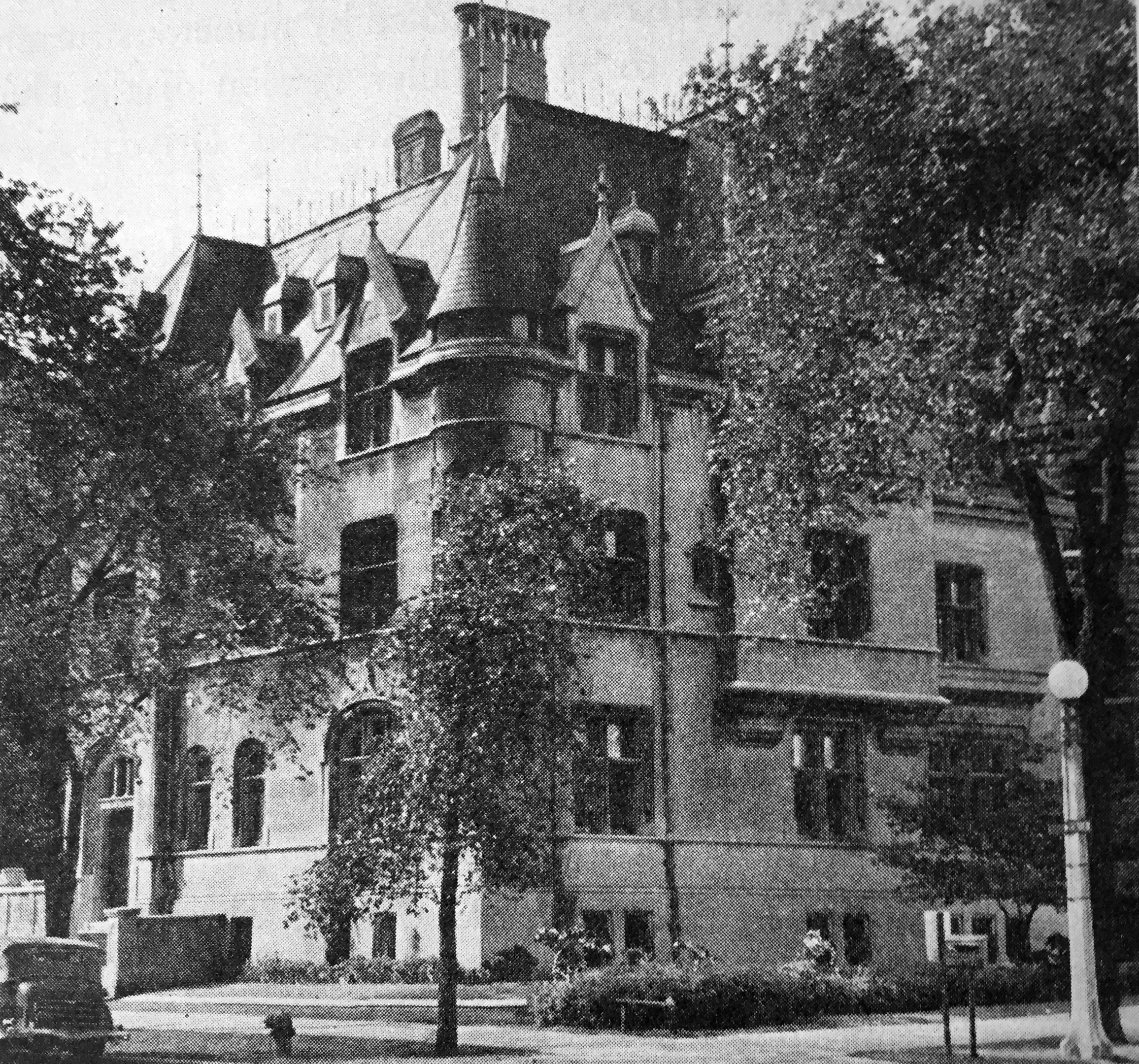 By Ernest Fuller
The Borden mansion at Lake Shore drive and Bellevue place, a Gold Coast landmark since 1884, is being sold by Mrs. Ellen Borden Stevenson, former wife of Adlai Stevenson, twice defeated Democratic candidate for President. and her sister and mother, it was learned yesterday.

Mrs. Stevenson, who lived in the 36 room chateau like home as a child, conducted an art club there from 1953 to 1958. She confirmed Saturday that the building is being sold, but declined to disclose the price. The sellers besides herself, she said, are her sister, Mrs. Ralph Hines, and her mother, Mrs. Ellen Waller Border Carpenter.

Corporation Is Buyer.
The buyer is International Rolling Mill Products corporation, 5000 Whipple st., headed by Barney E. Hopkin, Chicago industrialist. LeRoy A. Listug, vice president of the company, said that in addition to the Borden home the company also has contracted to buy the home adjoining to it to the north, at 1038 Lake Shore dr. This is owned by Mrs. Florence McGinley.

The corporation already owns the three remaining buildings on Lake Shore drive, between Bellevue place and Cedar street. The latest purchases—the deals are still in escrow, said Listug—would give the company a block of Lake Shore drive frontage.

The Borden home, a three story gray stone building, is one of the last of the mansions built by wealthy Chicagoans on the near north side before the turn of the century.

Import Stone Carvings.
It was originally occupied by William Borden and his family. William Borden, grandfather of Mrs. Stevenson, was a lawyer and successful mining engineer. The home os of French renaissance design. Stone carvings used on the exterior were imported from France, said Mrs. Stevenson. 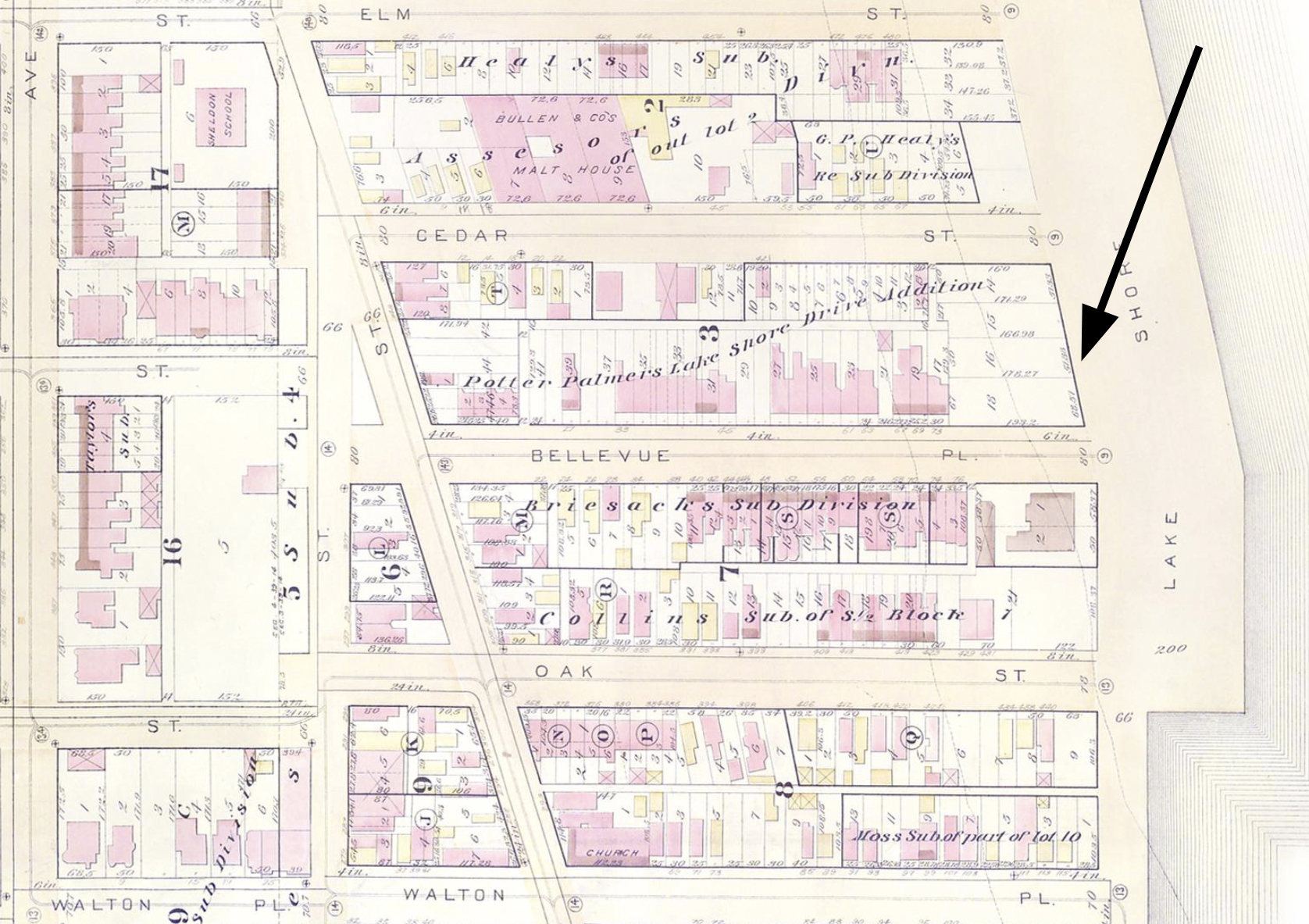 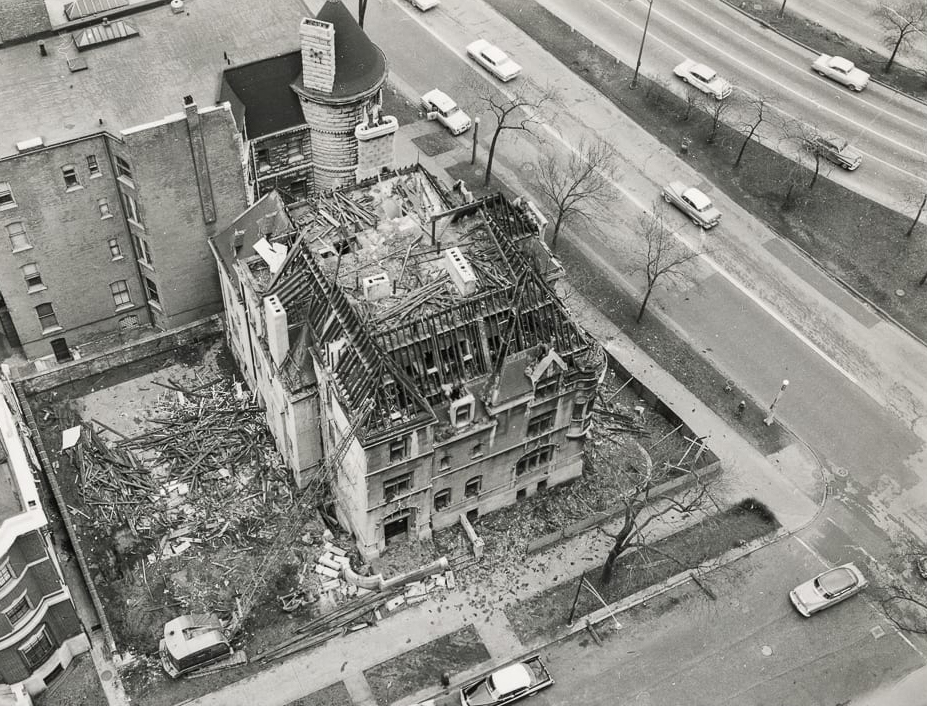 Just across the street from the Rockefeller McCormick house, William Borden hired Robert Morris Hunt to build his Chateauesque mansion in 1886. Borden was a partner of Marshall Field, a mining engineer, and an adventurer. In his lifetime, he led expeditions in the Bering Sea north of the Arctic Circle. Borden’s granddaughter Ellen lived in the home with her husband, Adlai Stevenson II.

The house was made of smooth-faced Indiana limestone and featured a slate roof articulated with turrets and dormers. It remained with the Borden family until it was demolished in the early 1960s.

Far more generous in square footage than other apartment buildings of the period, the Carlyle’s layout and services still reflected important changes from luxury buildings constructed before the Depression. Room dimensions and the number of servants’ rooms had shrunk, although, unlike its contemporaries, the Carlyle featured formal dining rooms. There were conveniences that soon would be available in many new lakefront buildings: balconies for every apartment, a swimming pool, and a health club. Apartments were as large as five bedrooms and up to 5,200 square feet. A typical floor was divided into two tiers, each with its own set of elevators, containing four somewhat smaller units.

To sell the more than 100 apartments, the “Little Carlyle,” a furnished residence on nearby Cedar Street, displayed sample layouts. The Carlyle remains a luxury condominium building today where even one bedroom units sell to close one million dollars. 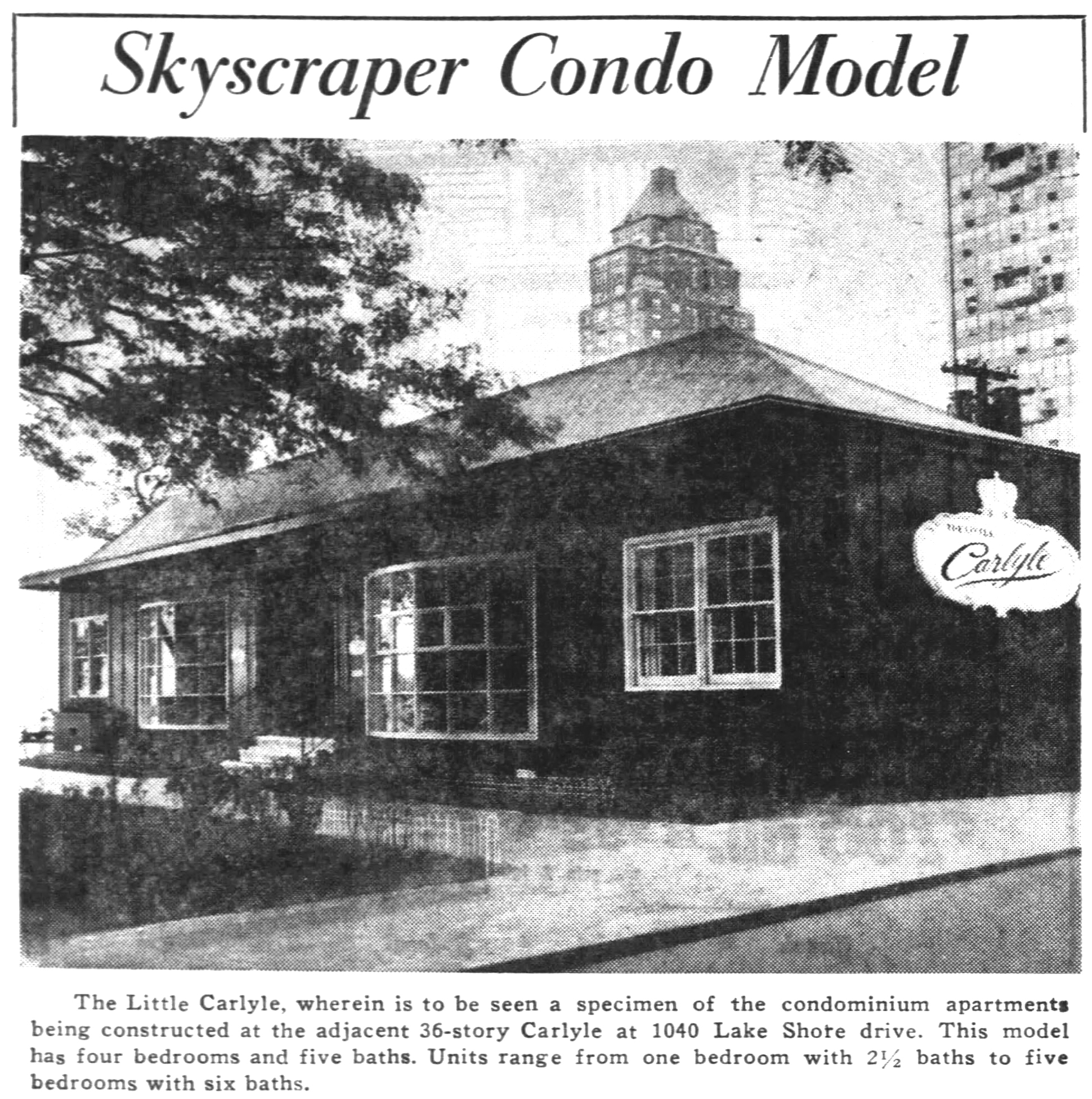 The opening of a dark green house with white trim on Cedar street on Chicago’s near north side is causing comment from neighbors, pedestrians, and drivers on Lake Shore drive.

The 36-story Carlyle, in Regency design, will offer condominium apartments ranging in size from 5,300 square feet in a five-bedroom, six-bath apartment, to 1,780 square feet of the one-bedroom, 2½-bath unit.

Showing of the model, whose furnishings were selected by a design consultant, William Pahlmann and Associates of New York, is by appointment only. Architects for the building are Hirschfeld, Pawlan and Reinheimer. Robin Construction company, Chicago builders for 50 years, is the developer and builder of the Carlyle, which will be ready for occupancy late in 1965. 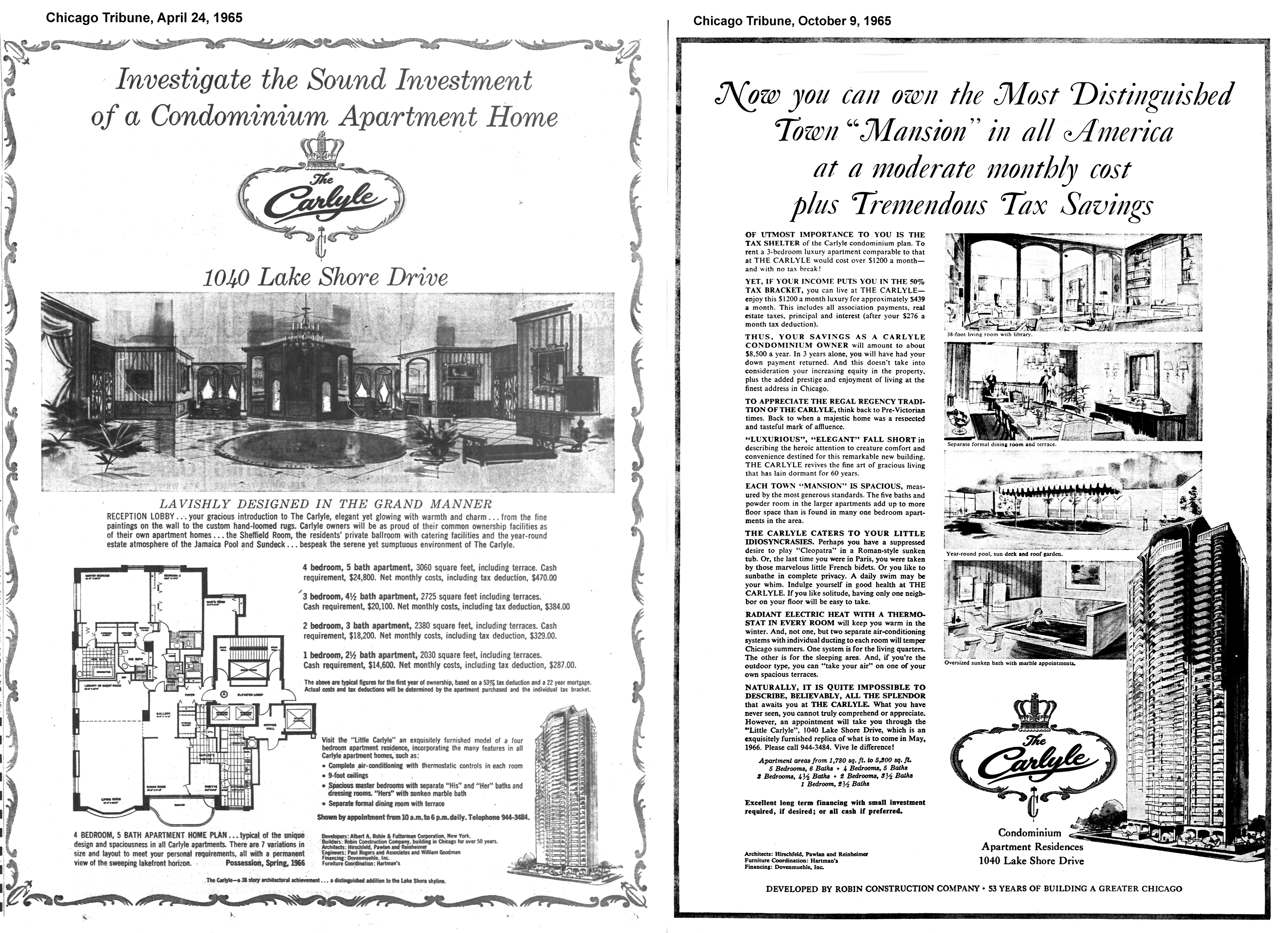 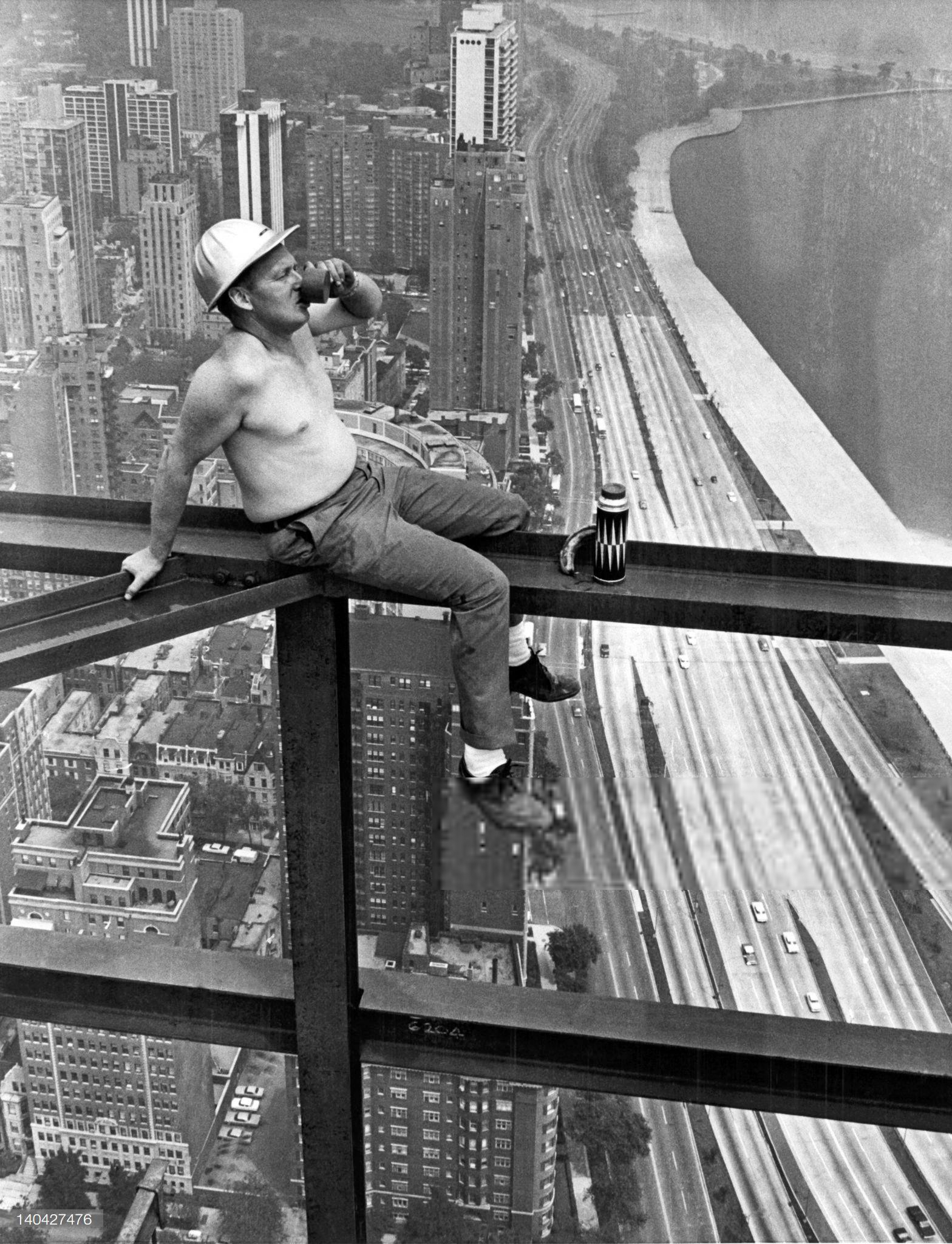 Construction worker near the top of The Carlyle.

The Carlyle, the 132-unit skyscraper under construction on Lake Shore drive in the Gold Coast between Bellevue place and Cedar street, is going up on schedule.

With 26 of the 38 floors in position this week, the 12-million dollar project is two-thirds up, and the sponsors, Albert A. Robin of Chicago and the Futterman corporation of New York, count on having it ready for occupancy in June, 1966. Buyers will not move in until carpets are down, everything shipshape, and workmen are out of the building.

Each buyer, under the condominium form of ownership, acquires title in fee simple to his own quarters and he enjoys tenancy in common with other owners of grounds, halls, common walls, general equipment, swimming pool, the sundecks, and all other elements that he does not occupy exclusively. He is free to sell or mortgage his property as he sees fit.

When he purchases a unit, he becomes automatically a member of the Carlyle Apartments Homeowners association, a not-for-profit corporation that oversees the business of the building and hires a managing agent to conduct the business.

Units in the Carlyle will vary from one bedroom to five, and from $63,000 in price to $120,000. Units of more than four bedrooms, however, are special jobs, and there will be only three, as plans now stand.

Robin’s company, the Robin Construction company, which has been operating in Chicago for 50 years, is handling the construction. As late os 1872, Chicago sportsmen were hunting ducks in the sandy marshes along Lake Michigan where the Carlyle now stands. The area later became associated with the great names of Chicago’s history, especially those of Potter Palmer and William Borden, who laid out a subdivision there.

The American equivalent of castles soon lined the lake front, exhibiting many types of imported architecture. The Carlyle will carry on the idea with traditional English regency. Its units are to be spacious and luxurious, the three-and four-bedroom homes having more than 3,000 square feet of living space and 4½ or five baths. 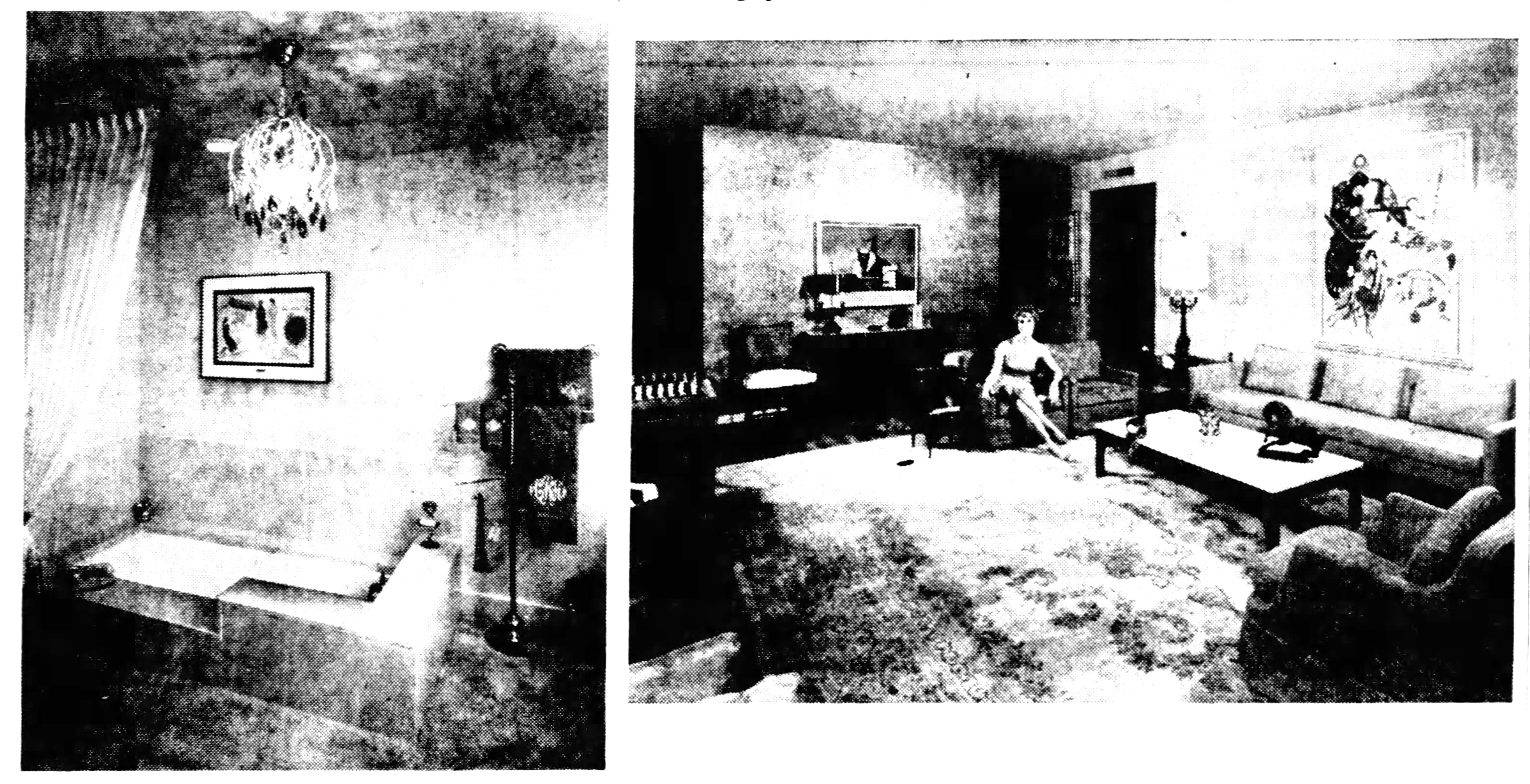 LEFT: Carlyle units will have his-and-hers bathrooms, and hers will have a Roman sumken tub, 6 feet long. All rooms are to be pre-wired telephone outlets.

RIGHT: Christina Crawford, actress-daughter of Joan Crawford, tries out the standard drawing room, 18 by 25 feet, in a model unit of the 38-story Carlyle structure being built on Lake Shore drive. Miss Crawford is appearing here in “Barefoot in the Park.” Buyers will move into their units in the skscraper next June. 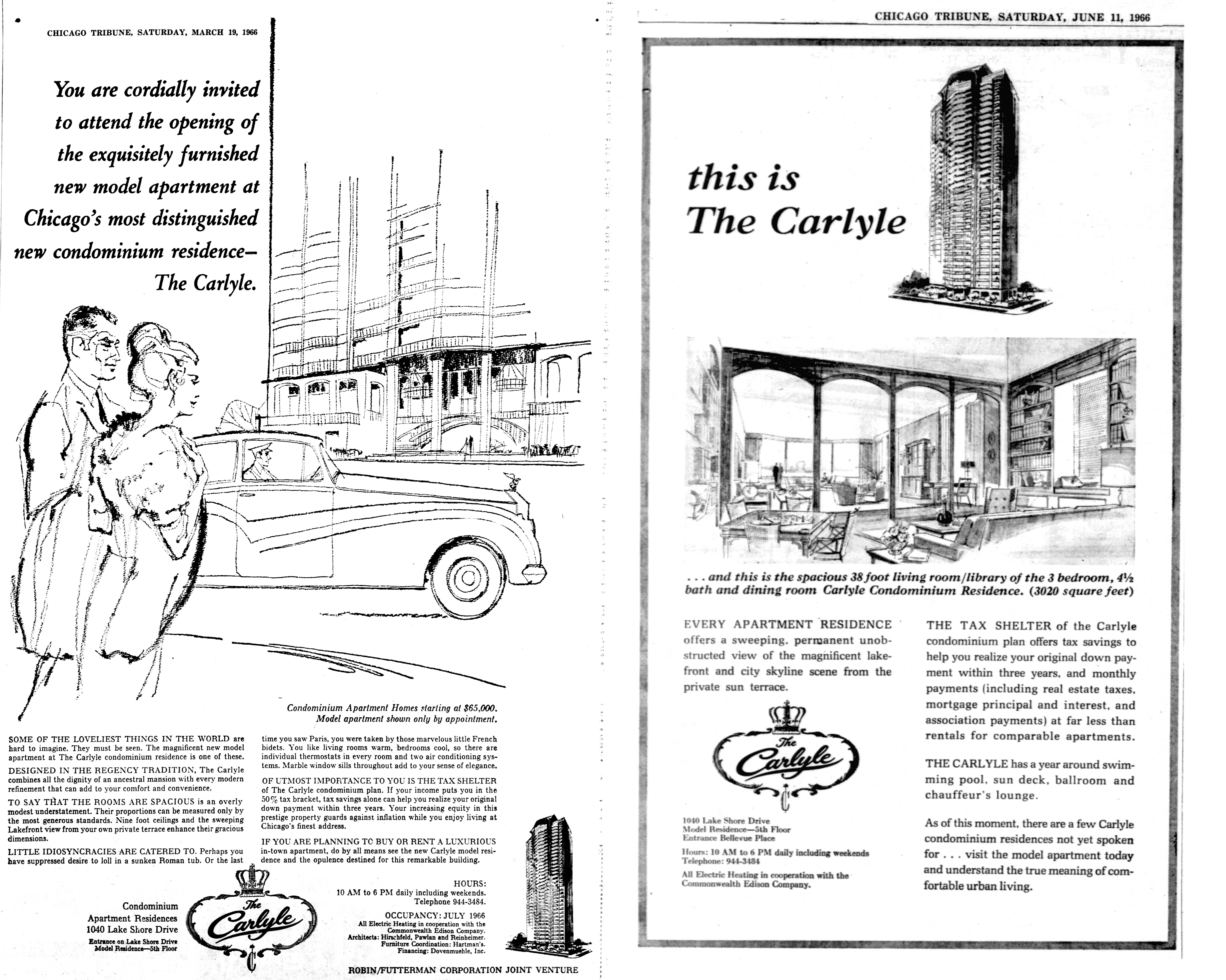 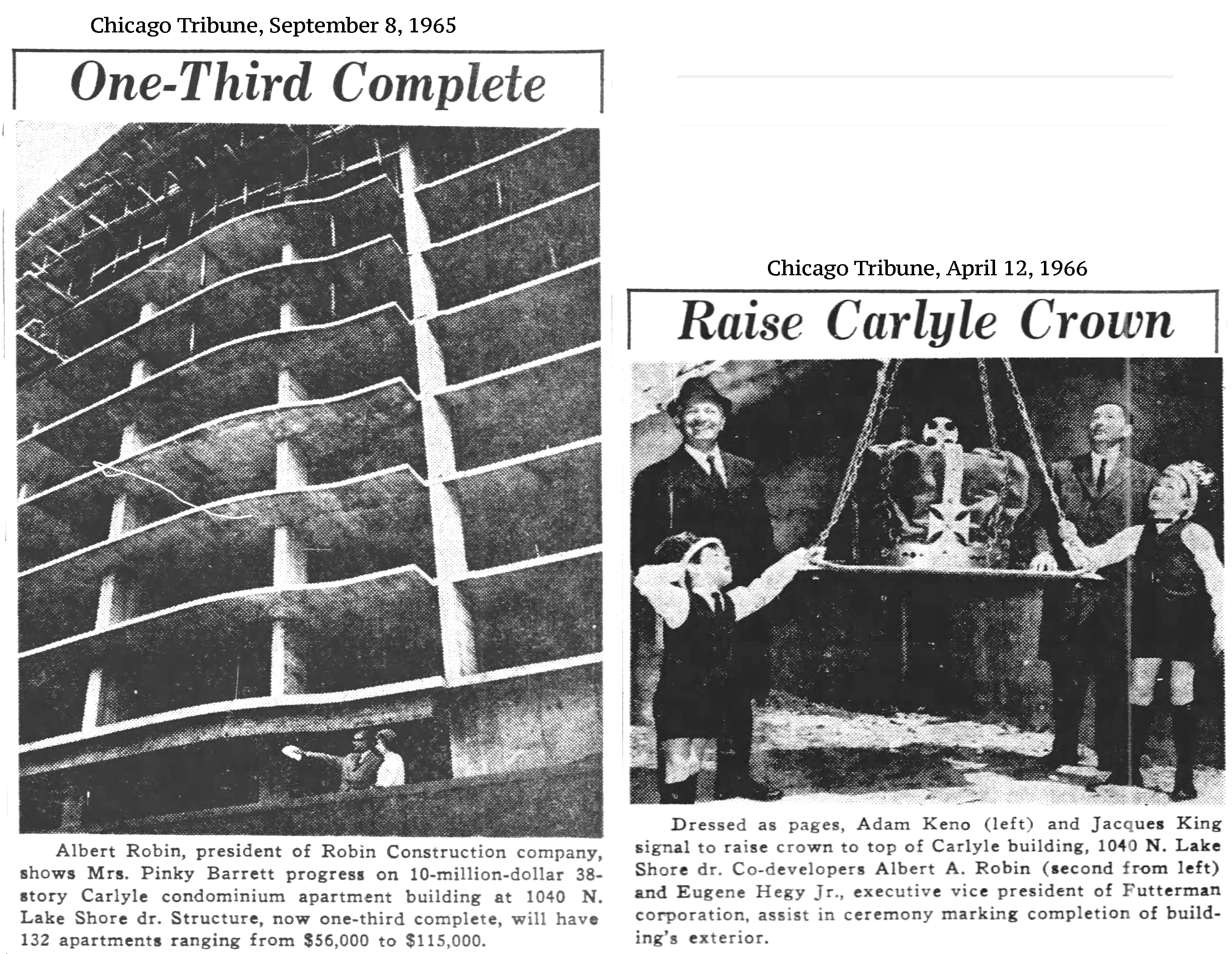 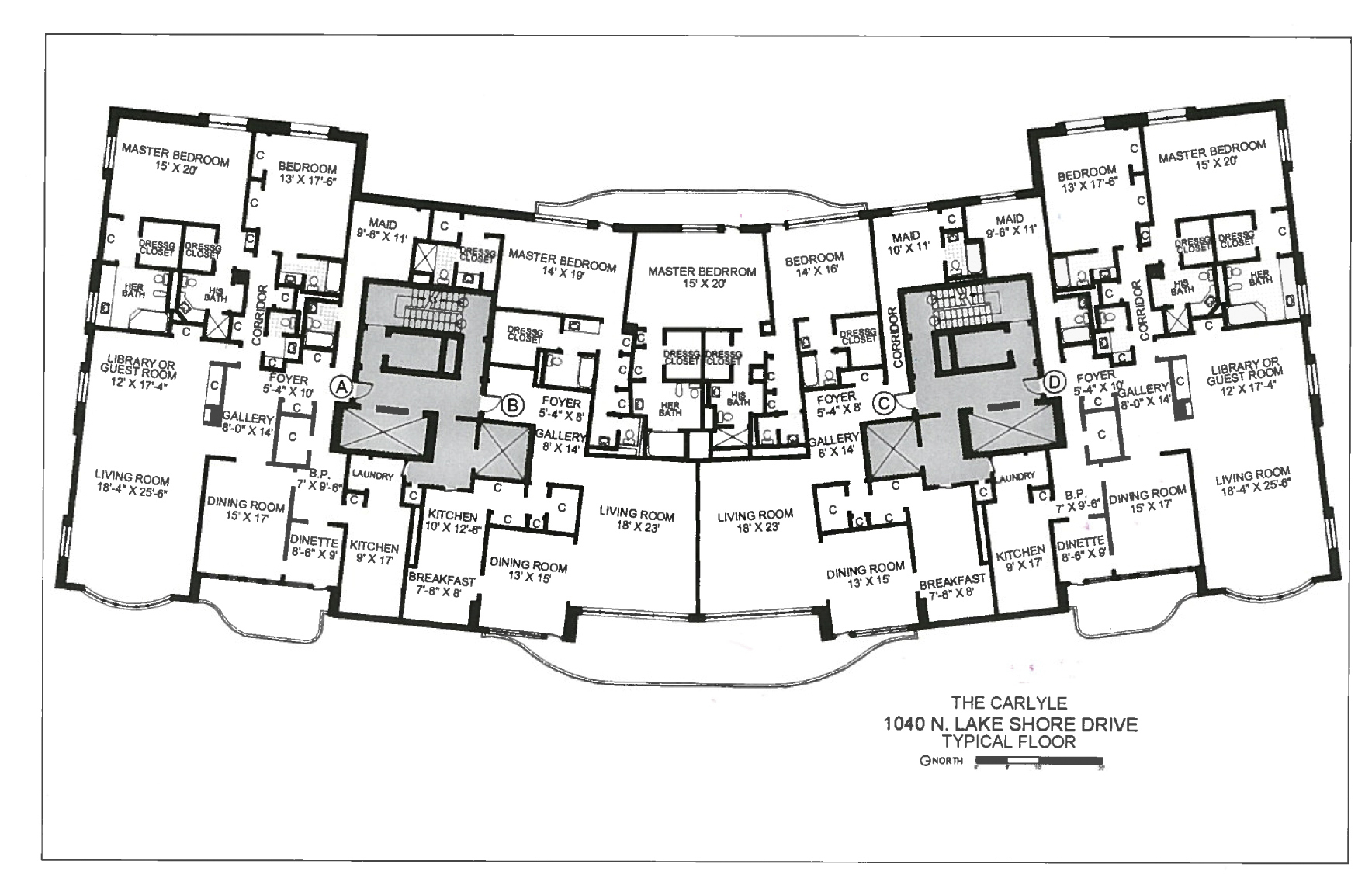 Kapos: Richard Daley moves in with The Carlyle’s who’s who

Daley is of counsel at Katten Muchin Rosenman law firm. It’s a job that requires lots of schmoozing with executives and potential clients. Now he’ll be rubbing elbows with big- name neighbors, too, as some of the city’s most notable business and civic leaders live at The Carlyle.

Linda Johnson Rice, chairman of Johnson Publishing and chairman emeritus of Ebony Media Operations, moved in with her parents in 1968 when she was 9 and in 1988 bought her own condo on the 35th floor. In 2010, after her parents’ passing, she moved back to their place on the 24th floor.

Rice’s good friends Neal Zucker and Marko Iglendza bought into the building two years ago. Zucker is CEO of Corporate Cleaning Services window-washing company and Iglendza is CEO of Terminal Getaway airport spas, which has locations in airports nationwide.

Zucker was a regular visitor to The Carlyle growing up as his grandparents lived there. His and Iglendza’s apartment is a mix of modern and traditional art and design. A favorite is a watercolor composed of bright dots of bug saliva by L.A. artist John Knuth.

“You just never get tired of coming home to it,” says Diane Freeman, ticking off the attentive service, a ballroom for entertaining and a nearly Olympic size swimming pool.

She’s a real estate broker with Baird & Warner and her husband, Louis Freeman, is a retired tax attorney.

The Carlyle was built in 1964 on the site once occupied by three limestone-and-brick mansions. Developer Al Robin was said to have approached Chicago’s corporate elite about moving into the building, which is at 1040 N. Lake Shore Drive. Now Robins’ son, Richard Robin, lives there.

Daley purchased his 8th floor one-bedroom unit (8B) about a year ago, paying $865,000, according to public records. He’s been refurbishing it for months.

His brother, former White House Chief of Staff Bill Daley, lives a few buildings away. The former mayor most recently lived at 900 North Michigan. His family has long been associated with the South Side Bridgeport neighborhood where he grew up.

The Carlyle’s rich history on the lakefront fits with Daley’s legacy as mayor.

He oversaw creation of Millennium Park, the Frank Gehry-designed Pritzker Pavilion and the glistening “Bean” sculpture. Navy Pier became a major tourist attraction during Daley’s 22-year tenure. He’s also credited with improving the walkways around Museum Campus. And, of course, there’s the park built on the Meigs Field runway, which he bulldozed.