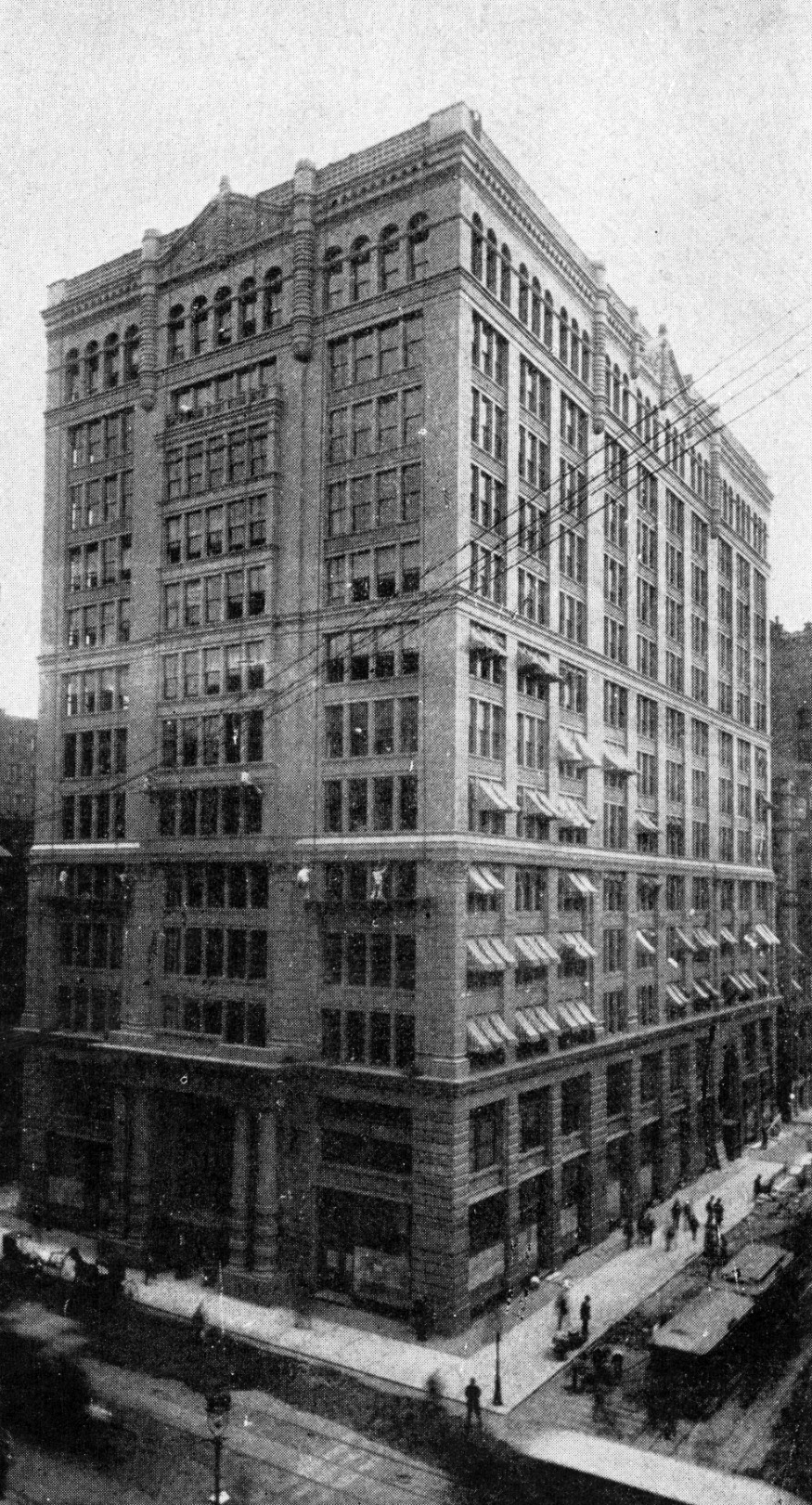 From The Standard Guide to Chicago For the Year 1891:

This structure occupies the site of the old Chamber of Commerce which was erected immediately after the fire and which was occupied by the Board of Trade until the great commercial edifice at the foot of the street was completed. The new Chamber of Commerce building is in many respects the finest commercial structure in the world and certainly one of the grandest office buildings in the United States. The property upon which it stands cost $650,000, and the building itself has cost Messrs. Hannah, Lay & Company, the owners, over $1,000,000. Standing upon the mosaic floor on the first story in the center of the building, throwing back your head and looking up, you will see twelve balconies with their bronzed railings rising in perfect symmetry above you. Away at the top and crowning this grand central court is probably the largest skylight in the world. It is a plate-glass arch thirty-five feet wide and 108 feet long, and its weight is supported on iron and copper frames which rest upon iron trusses. The frame is bronzed and finished handsomely.

Through this mammoth window in the roof a perfect flood of light penetrates the central court, so that tbe interior of the building is almost as brightly illuminated as the exterior during the day. As you look up, if your neck will bear the strain, you will notice that not a post or a pillar is visible along the sides or between the twelve balconies, other than those at the north and south ends, the intervening stretch being perfectly clear and free from obstruction.

The twelve balconies are supported on the cantilever principle. There are 500 office rooms in this structure, every one of which is perfectly lighted. The thirteenth floor is finished as handsomely as the first. You will notice that the marble used in the wainscoting ivom vop to bottom is perfectly matched, the grain running through from slab to slab as perfectly as it did in its native Italian quarry. All of this marble was quarried in Italy and finished in Belgium for this building. The mosaic floors contain billions of separate marble blocks, and present a beautiful as well as a novel sight to the visitor. The ceiling of the main entrance is a charming bit bf mosaic work ; the bronze railings and elevator shaft gratings are all highly finished. 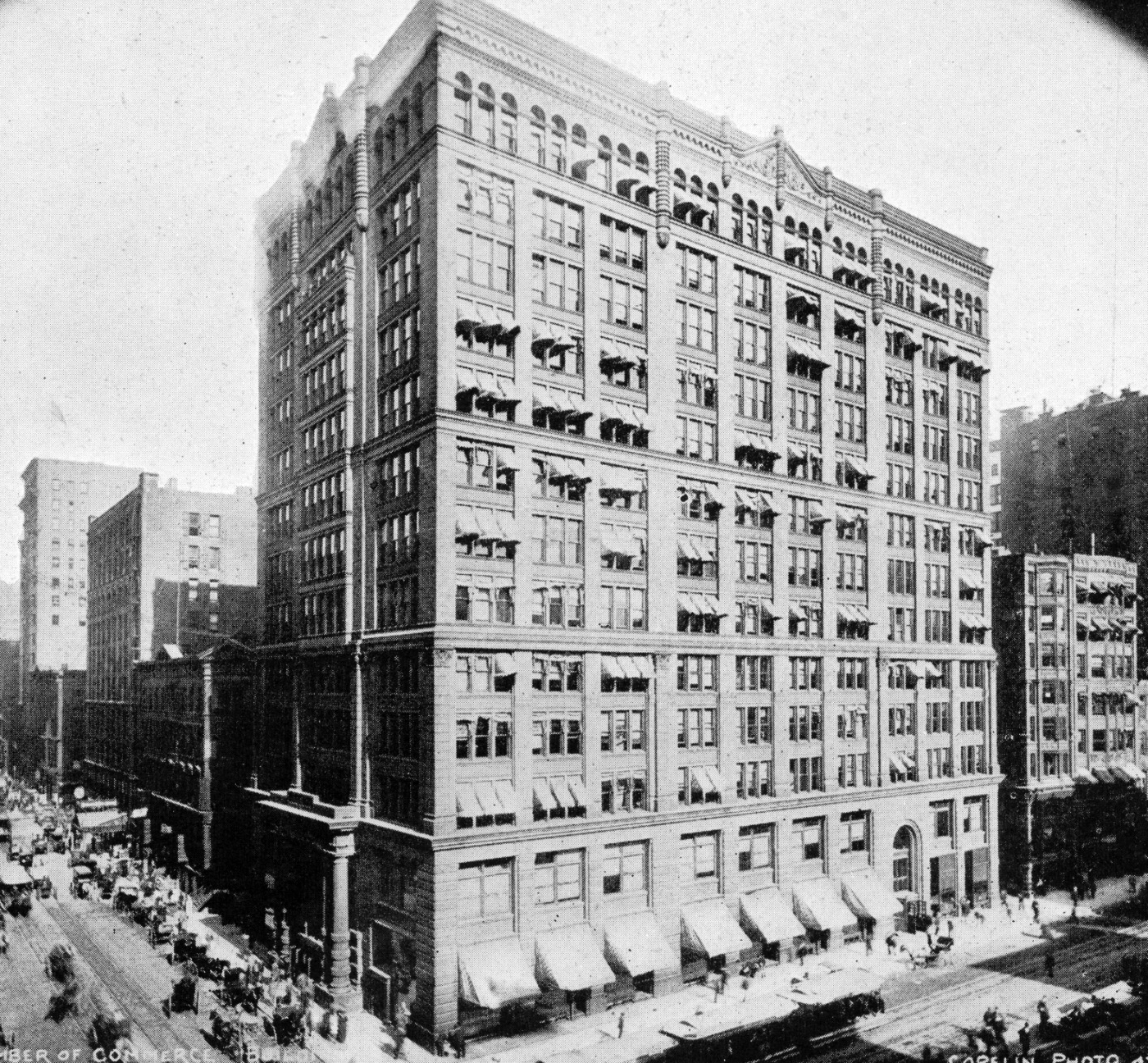 Eight passenger cars and two great freight cars are constantly moving up and down between the thirteen stories of this magnificent structure. the time consumed in the trip being a minute and a quarter, counting stoppages. Looking down, the people on the floor of the court below seeth like pigmies. The height makes us dizzy and we move away from the bronae railing fearing that the natural but unaccountable temptation to throw ourselves over it may gain the mastery of us. The Chamber of Commerce building is a ciiy within-iitself. There are more people doing business inside its walls than you will find in many prosperous towns, and the amount of business transacted here daily equals that done in some of the most pretentious communities in the country. Every branch of commerce and nearly every profession is represented here. We can spend a couple of hours here very pleasantly, strolling along the different balconies and taking observations of the multitude of people who are constantly streaming into and out of the elevator cars. 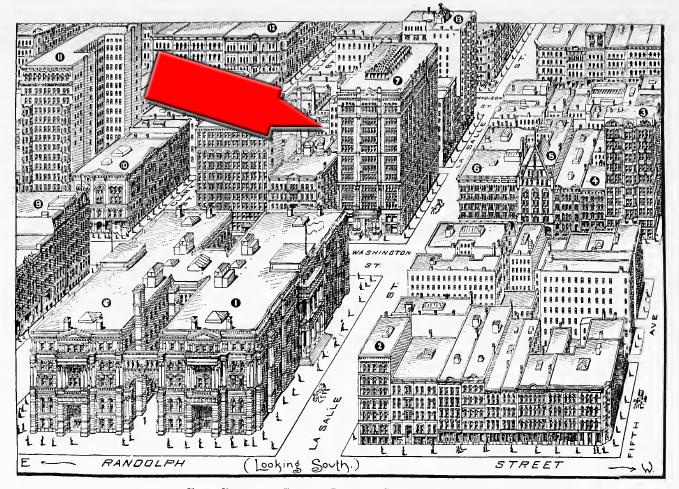 The 8 passenger elevators can that carry 30,000 people in 10 hours. The 600 offices of this structure are occupied by professional men of all kinds, and some great financial institutions here have their Western offices

Among them is the Equitable Life Assurance Association of New York. There are 4,100 electric lamps, miles of bronze railing, acres of tiling and mosaic, and 3,300 tons of steel in the edifice, which is one of the principal high steel buildings of the city, and a sight to be seen.

This magnificent fireproof structure is one of the grandest in Chicago, presenting as it does an exterior of thirteen stories of solid masonry and an inner frame of iron lined with fireproofing material. The intcrior is lighted by one of the largest skylights in the world, and the ofiices circling as they do around one grand central court, which is crowned by this huge plate glass skylight, have light and ventilation facilities un surpassed. Situated in the very heart of the business center, convenient to all stations on the Union loop and passed by both North and West side electric lines, the location is one of the best. The building has entrances on both Washington and La Salle streets, and has excellent elevator and janitor service modern in every particular. U. S. mail chutes on every floor, and free collection service. Messenger call boxes in every office, and situated in the basement is one of the finest safety deposit vaults in the city.

The building has become head quarters for the majority of contractors, builders, and brick, stone, lime, cement and building material men of all kinds in the city.

This building was wrecked in 1928 to make way for the 33 N. LaSalle Building, also known as the American National Bank building.