Havlin’s Theatre, on Wabash avenue near Eighteenth street, opened last evening with a performance of Lecocq’s comic opera, “The Pretty Persian; or, The Hullah’s Bride.” The opera is the one which has been adapted and is now being played by Francis Wilson’s company under the title of “The Oolah.” The opera as given at Havlin’s is an English adaptation by I. W. Narcross Jr., and it is claimed that this is the first complete representation of the opera in English. The company is the Norcross opera company, with Miss Laura Bellini, formerly with the “Gypsy Baron” company, as prima-donna. She is supported by Misses Lila Blow, Hattie Harvey, Messrs. Burt Haverly, Stuart Harold, I. W. Norcross Jr., Ed Vanvegten, J. C. Abdil, etc. The company gives a pleasant performance of the opera, playing it with a good deal of spirit, though under conditions. which were rather disheartening, as, in consequence of the heavy storm, there was water in the dressing-rooms of the theatre to the depth of fifteen inches, and the players effects had to be removed to rooms in the upper part of the building. Three feet of water in the cellar rendered the electric light plant useless and recourse was had to gas, which fortunately was unaffected by the flood. Notwithstanding the storm an audience of fair size was present at the opening.

The theatre has been newly decorated and, with the handsome stage settings of the different scenes, made an excellent impression. The costumes are new and supply many bright bits of color. The chorus is effective and produces a good body of tone in the finales, besides contributing a fair amount of action. 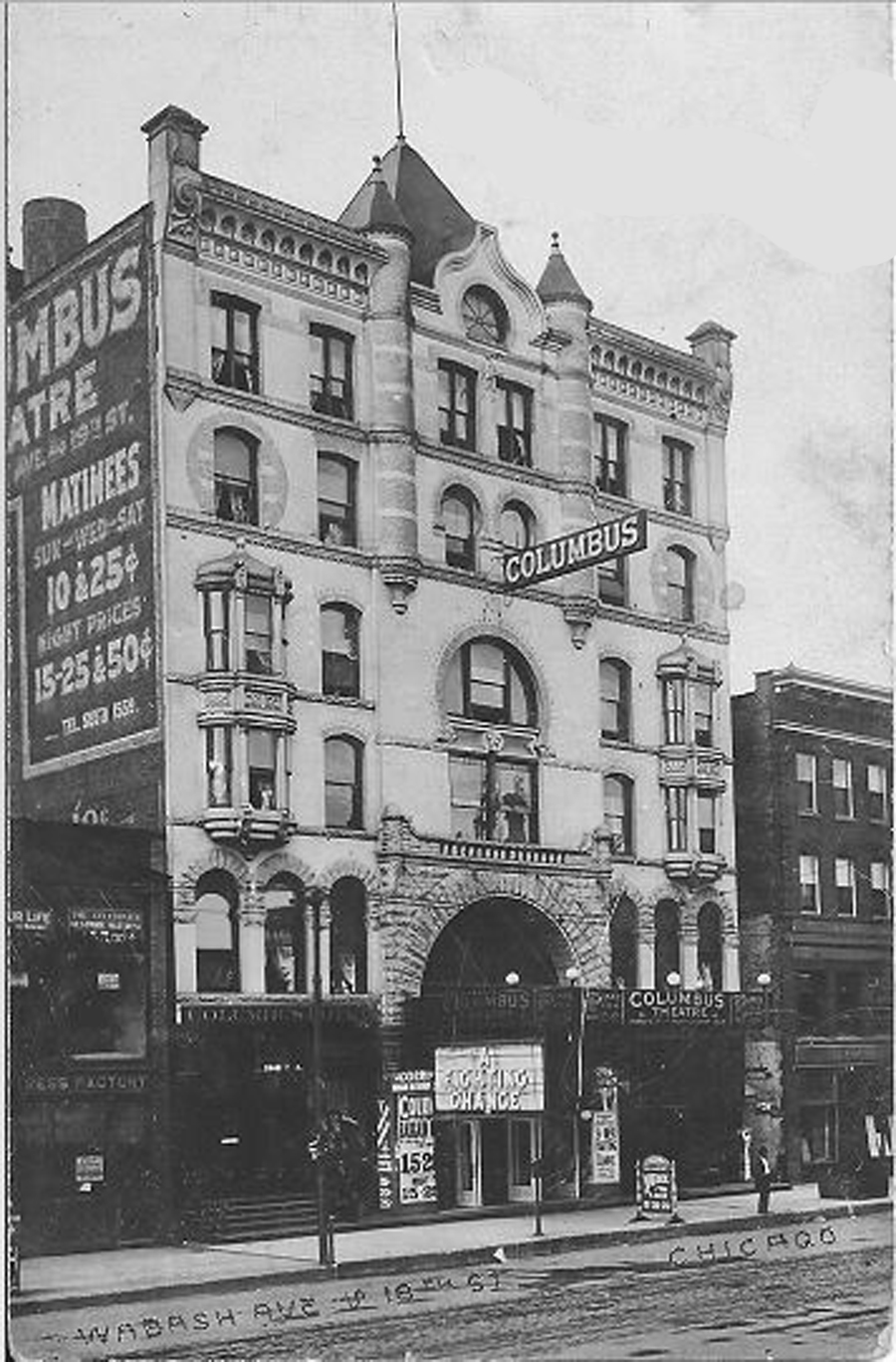 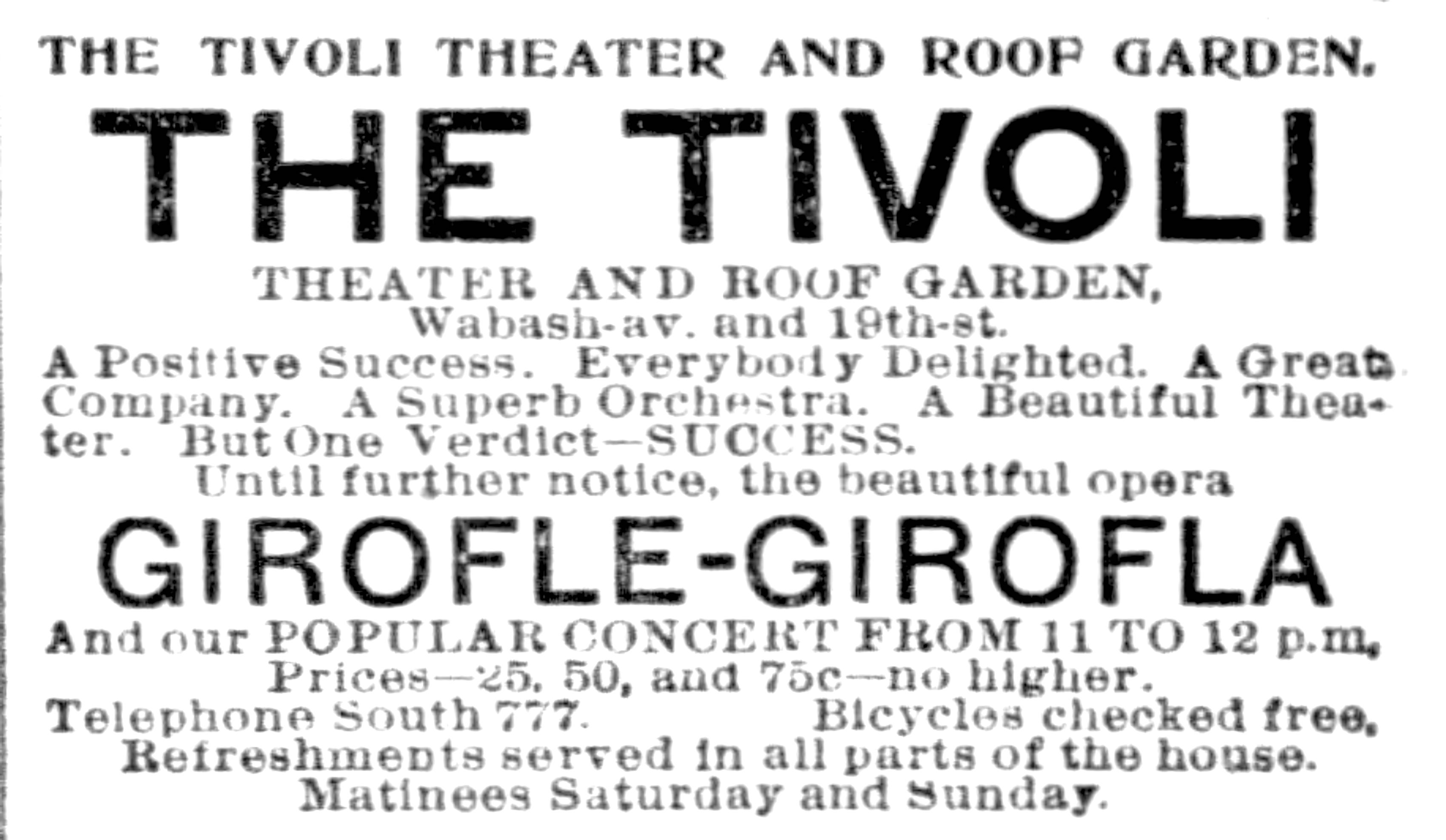 OPENING OF THE TIVOLI
New South Side Resort
The new Tivoli theater (reconstructed and remodeled from Havlin’s), Wabash avenue and Nineteenth street, will be opened to the public next Saturday evening. The public opening, however, will be preceded by a special “first night’ performance to an audience of about 1,000 specially invited guests on next Friday evening, Aug. 7. The opening of the “Tivoli” will constitute the news event of the week in theatrical circles and much interest is felt in the fortunes of the new- house, especially since it is the first theater in Chicago to be run upon the Koster & Bial New York plan, which permits of serving refreshments all through the house. For years past the expediency of maintaining a first-class theater upon this plan in Chicago has been the theme of theatrical gossip, and in the new “Tivoll” the experiment is at least fairly started. For size, lines of sight and other necessary adjuncts of a popular auditorium the house will creditably compare with any theater building, and with exits and entrances on all sides it can be kept most agreeably cool. The remodeling of the building has completely transformed it into an entirely different theater from the former Havlin’s. Adjoining the theater proper, and reached from the main balcony, is a large and well-appointed cafe, where refreshments and supper will be served. The service of refreshments, both In the theater and the cafe, is a feature of the “Tivoli” which will be most strictly looked after. Another new feature here, but similar to the Koster & Bial programme, 1s a popular concert which is to follow the regular performance every evening from 10:30, or about that, until midnight. It is stated that the orchestra will be an unusually good one, in charge of Selli Simonson as musical director, assisted by Banks Cregier as concert director.

The remodeling and decoration of the house has been an expensive undertaking, but it has resulted in one of the most attractive theaters in the country, possessing a handsome interior elaborately treated in white and gold, which will doubtless light up effectively. The “Tivoli” is to be devoted to comic opera and “Girofle-Girofla” is the opening attraction, with a chorus of fifty voices and orchestra of twenty five picked musicians. Mlle. Nina Carritte, formerly of the Carl Rosa opera company, and who came to the United States under contract to Abbey, Schoeffel & Grau, is the prima donna soprano of the new company, which includes Payne Clark, formerly tenor of the Tavary company; W. H. Stewart of the Bostonians; Charles Bigelow, as leading comedian; Myra Morrella, Grace Milton, Bessie Fairbairn, etc. The sale of seats commences at the box office tomorrow morning. 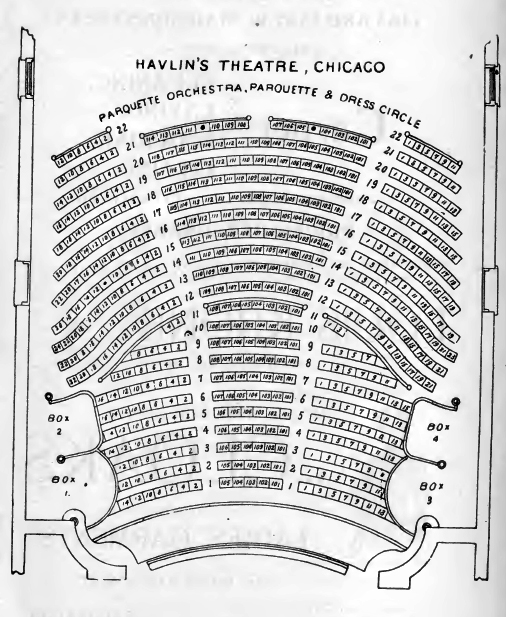