South Water street, Chicago, is the greatest turkey mart in the world. Thanksgiving day dinners in the feather, with the other requisites in the scale, shell, skin, hull, peel, or rind, are shipped from this thronged market to all parts of the Unites States. The foreign countries, although they do not consider Thanksgiving dinners essential, are also heavy buyers of poultry and game, and a large share of the business and the street is carried on with firms abroad.

Three hundred commission houses doing business in this street act as distributors for the enormous number of turkeys consumed on Thanksgiving day. There are three large fowl packing concerns which make a business of supplying the dressed turkey trade, and such orders as 25,000 dressed turkeys to one house are not uncommon in the trade.

Over a week ago South Water street began putting on its Thanksgiving airs and now is fairly alive with customers and supplies for the feast day which is to be celebrated next Thursday. In the mile of South Water street, between Wabash avenue on the east and the haymarket on the west, is transacted the poultry and game commission business of the city and, in large part, of the country as well. During the daylight hours scarcely an inch of space in this entire distance is unoccupied. Sidewalks, streets, and stores are alike baricaded with people, teams, and produce.

A busier street, either taken in sections or as a whole, is not found anywhere on the globe. So great is the pressure of trade pedestrians find it next to impossible to force their way through the throngs in the regular pursuit of business.

This is the street in which a large fraction of the world’s supply of turkeys is handled. It is besides the game distributing center of the West where Thanksgiving dinners from the fatty opossum to the huge black bear, from the appetizing bluepoint to the black sea bass, or from the delicate Bob White to the great Canada goose, can be purchased by the provident epicure. 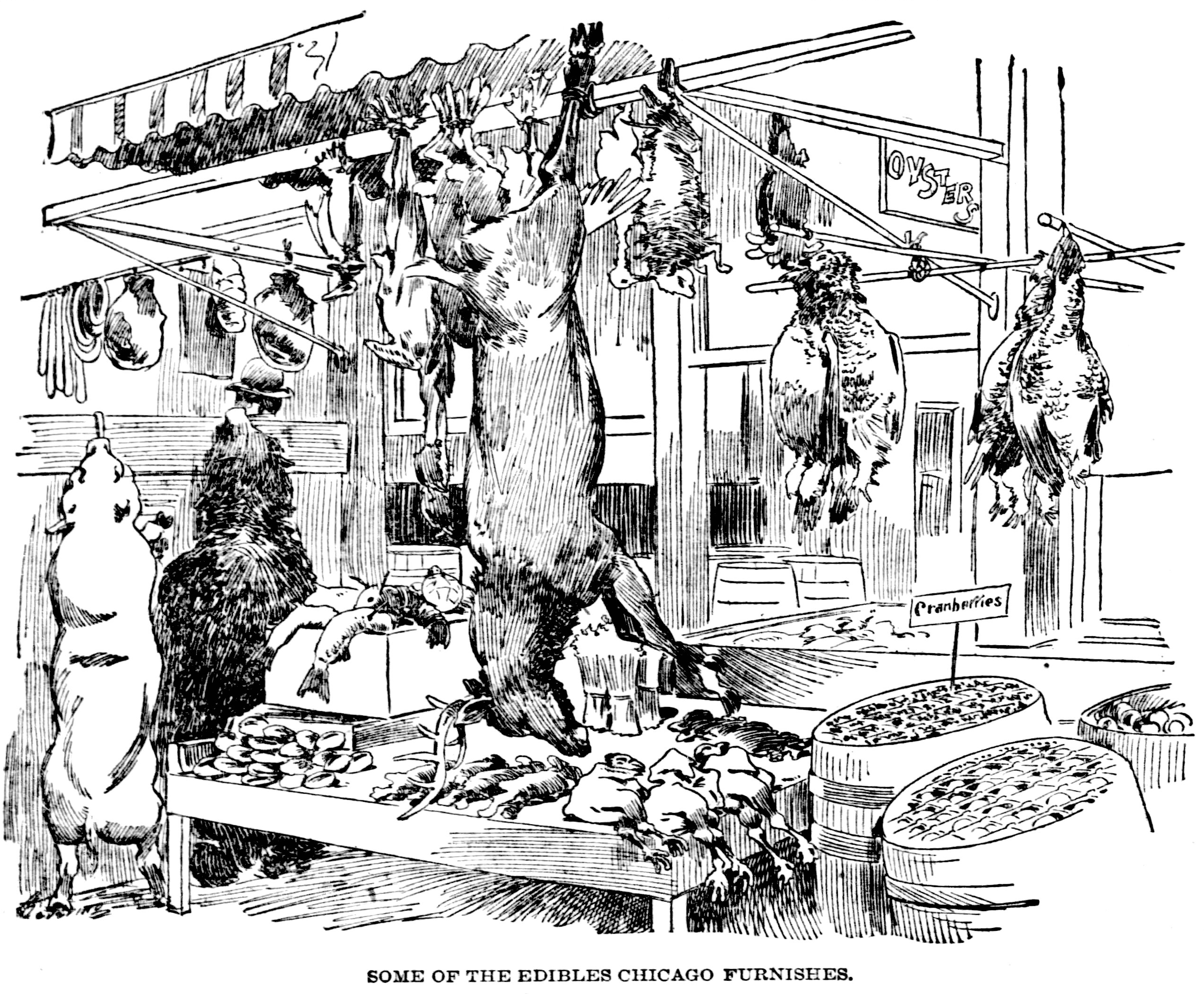 Quantities Chicago Will Eat.
According to the best estimates of the commission men, who are now preparing for the tremendous rush, Chicago will consume next Thursday, in bulk, the incredible amount of edibles given in the following:

The figures for Chicago consumption do not represent by one-sixth the total amount of Thanksgiving dinners which will be handled by commission men in this street. Take the figures on cranberries for an instance. The crop this year is as follows:

At least 65,000 barrels of this crop will be sold through South Water street commission houses, although Chicago consumes but 10,000 barrels. But the figures on cranberries are scarcely a fair estimate of the percentage of the United States’ Thanksgiving business which will be done with the efficient assistance of South Water street commission men.

Chicago handles more game and poultry than any other city in the Union, because it is situated commercially and geographically midway between the producing and consuming States. Besides furnishing the home consumption South Water street merchants ship carloads of game direct to Europe, since New York has no stock to supply the demand and European purchasers are forced to buy direct. St. Louis dealers buy game from States to the south and in the immediate vicinity of that metropolis, but the outlet for the St. Louis commission men is Chicago, and from that cause St. Louis dealers act in the capacity of agents for Chicago business men. It is safe to say that of the 6,000,000 turkeys which will be consumed next Thursday at least 2,000,000 will be handled either in crates or carload lots by South Water street commission men.

Sell Tons of Dressed Fowl.
The largest fowl packing house in the world is located on Dearborn street, just off South Water street. This house ships dressed fowl to Liverpool by the carload. Englishmen buy turkeys of it in February for the next Christmas’ consumption. An idea of the business done by this concern can be derived from the fact that it is now filling an order from one house for 25,000 turkeys, 25,000 chickens, and 25,000 ducks. Dressed fowl as a rule are bought in the late winter or early spring, because in the summer most of live fowl becomes soft and thin, and not good for the table. Turkeys used at summer resorts are killed and frozen in the spring.

These days Thanksgiving turkeys are coming and going so fast that where one day there will be 1,000 live turkeys in a coop, the next day perhaps only half a dozen will be left.

These packing houses employ men by the day who pick 200 chicken an hour. The can get the feathers off turkeys at the rate of 100 turkeys an hour, and half that many ducks can be picked in the same time. It is possible in one of these packing houses for a rooster to crow at 12 m. and be on the ice at 12:02.

Can Pick 6,000 Turkeys a Week.
The good housewife who finds it an hour’s disagreeable task to pick one turkey will wonder how one man can handle 6,000 turkeys in a week. The killing process is simple. A knife blade is stuck down the the fowl’ mouth, killing and bleeding it at the same time. The turkey is then doused into the scalding vat. When thoroughly wet it is jerked out and with three, or, at most, four motions of the hand all feathers are removed. If it occasionally happens a turkey is undergoing the process of being frozen before he has realized he is not strutting about in the coop, it is due to the dextrous maneuvers of the cleaners.

Most of the turkeys which will be eaten in Chicago on Thursday, and, in fact, those which will be eaten in other cities, were born and bred in “Ole Mizzoura.” Missouri is the greatest turkey-raising State in the Union. The annual Thanksgiving crop from there will fott up between 2,000,000 and 3,000,000 turkeys. Bear and deer come from the Northwestern States principally. Prairie chicaken, wild duck, partridge, quail, and small game come principally from the West in early fall; later from the South. All this game and poultry producing territory recognizes Chicago as its railway and commercial center.