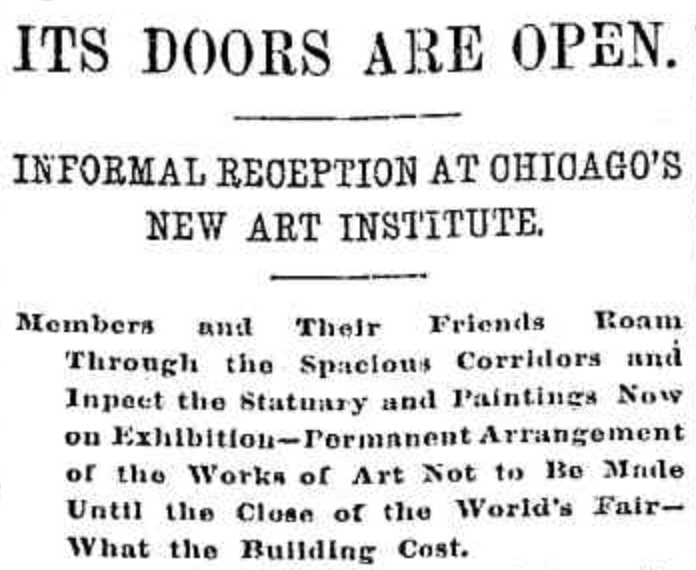 The doors of the new Art Institute on the Lake-Front were thrown open yesterday afternoon, and with no more than an informal reception to members of the institute and their friends the beautiful art palace was declared practically ready to add its share to education and culture. There yet remain many finishing touches to be given the exterior and interior of the building, but most of these deficiencies were net visible to the majority of visitors. They came in carriages and from 2 o clock until 10 in the evening inspected and admired the building and the treasures it contains. The entire collection belonging to the Art Institute has been removed to the building. The statuary has been placed, the pictures hung, and the articles of vertu arranged through the rooms and corridors. The arrangement is only temporary, for the World’s Columbian Exposition will use large portions of the building for the next six months, and the Art Institute will not obtain complete control of all the rooms until fall.

The effectiveness with which the art collection was displayed bore out the made all along that the plan adopted for the building would secure conditions for such as many galleries do not possess. The building has a frontage of 320 feet on Michigan avenue and a depth of 175 feet. Ultimately the building will describe a parallelogram in the center of which will be two courts. Now only the front and the north and south wings are completed. Between the two wings is erected the auditorium which will be used by the World’s Congress Auxiliary.

The main entrance is in the center of the Michigan avenue front. A visitor mounts an easy flight of steps 120 feet wide to reach the lofty doorway. Two great lions by Kemys will flank the steps. They have been donated by Mrs. Henry Field. Two figures will be placed on either side at the top of the steps. 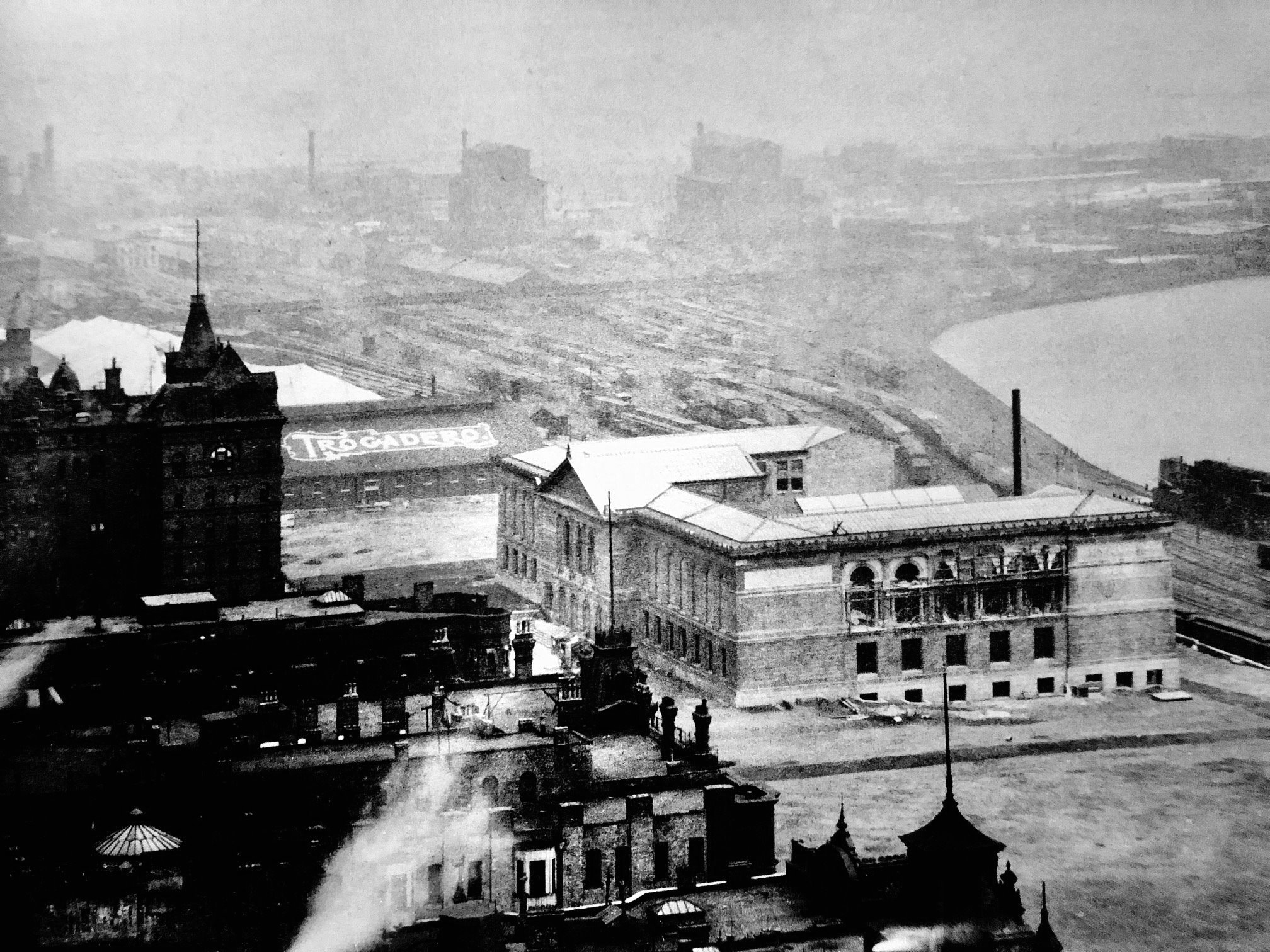 Chastely Classic.
The chaste classic plainness of the exterior of the building is continued within in materials lighter in color, stone is used. A visitor steps over the threshold into a broad, lofty lobby, from either side of which stretch long, high rooms, which will become the depositories of the institute s statuary collection. The walls and columns in the entrance halt are of pink Tennessee marble. The marble shaded from a pearl gray to a delicate pink. From either end of the west side of the lobby spring branches of a marble staircase whose balustrades are ornamental iron. The pinkish colored walls of the lobby form a fine background for the statuary which is placed there temporarily.

The works shown yesterday comprised a copy of Canova’s “Venus,” “A Lost Pleiad,” presented by Mrs. E. S. Stickney, copies of Michael Angelo’s “Prisoner,” Donatello’s “St. George,” an antique Apollo and Venus, and a bronze bust of the late John W. Root. There are fifteen rooms on the first floor, all opening from a is continued around the building nearest the court. On the second story there are nineteen rooms, opening from the corridor.

The scheme of decoration of the rooms and the corridor is simple. The walls are maroon and crimson and the ornamentation is contributed by the pictures themselves. In the corridor are the of armor owned by the institute, the carved furniture and glass cases containing more delicate articles. Pictures were hung in all the rooms. The institute will not a systematic plan of until the Worla’s Fair is over. Probably the corridors will continue to be used for works other than pictorial.

Light comes through clouded glass roofs. Yesterday, despite the murky sky, every picture showed to advantage. There are no projections to throw shadows over the paintings.

On the northwest and south sides of the building on the second floor are loggias. The spandrels on the north side represent music, painting, and architecture. They are the work of Martiny. The panels are taken from the frieze of the Parthenon. 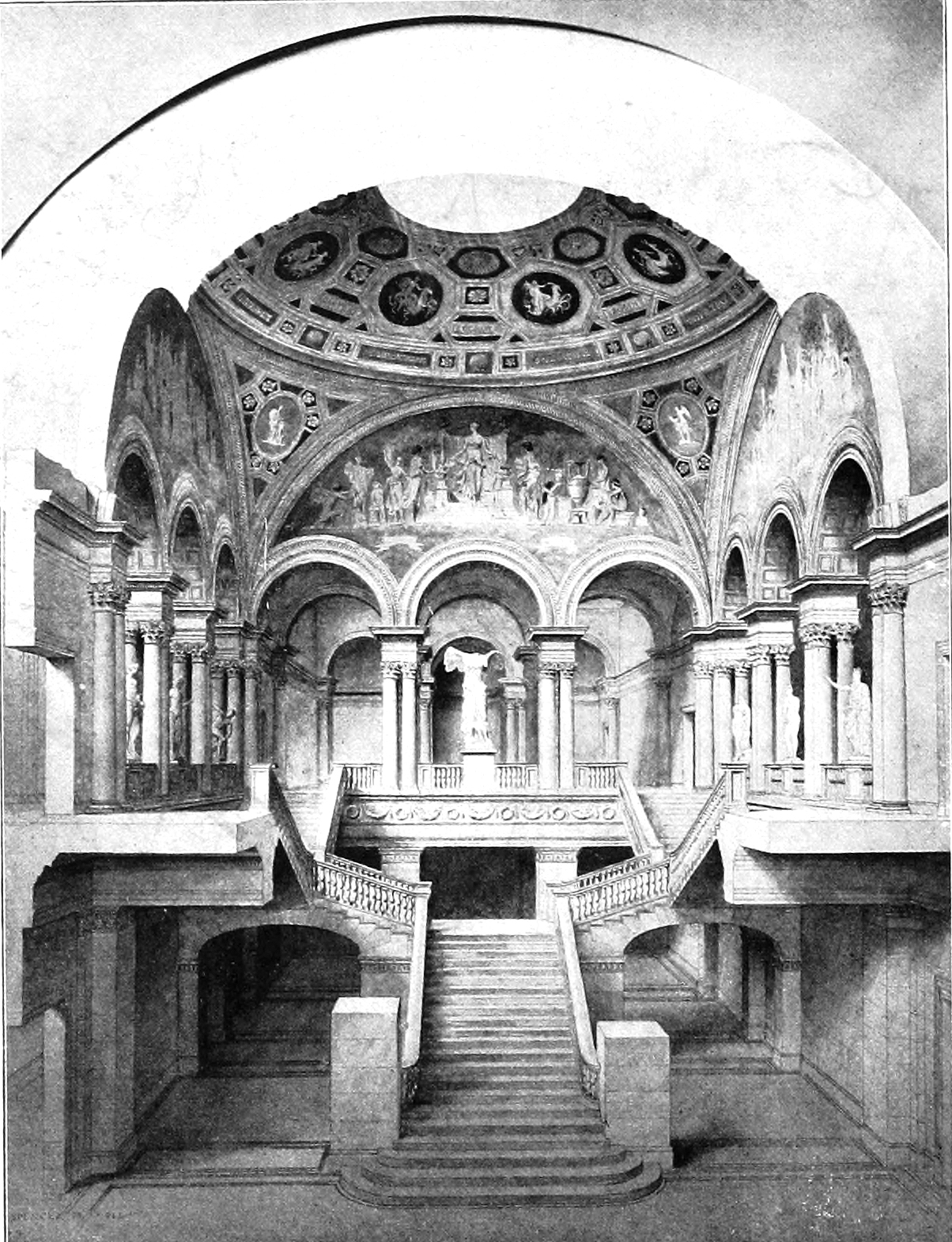 Improvements and Additions.
The class-rooms of the school of the Art Institute will be located in the basement of the building. The upper stories contain room for an art collection of large proportions. The Art Institute will make some additions of great importance to its collection. One will be a collection of several carbon prints made by the house of Braun & Co. of Paris. The prints are reproductions of famous sculpture and paintings, ancient and modern. No other art institution possesses a similar collection. Tie prints will probably not be framed, but will form an addition to the library. The institute will also receive a large accession from the World’s Fair art exhibit. Of the Trocadero collection of casts a selection worth $50,000 will be made. It will be placed in the court under a glazed roof.

The World’s Columbian Exposition made a contribution of $200,000 to the building fund of the Art Institute on condition that it should cost at least $500,000. The Art Institute realized $265,000 by the sale of its old building to the Chicago club, and the last annual report of the trustees stilted they had obtained by private subscription $120,000 more were confident that a greater sum could be raised if needed. Uhe building will cost over $600,000 when finished.

The ground occupied is given by the city on consideration that the ownership of the building be vested in the city—terms similar to those agreed upon between the Metropolitan Museum and the City of New York when the former’s was placed in Central Park. The Art Institute is to use and occupy the building under the conditions that it shall open the museum free of charge to the public from 9 to 5 every Wednesday and Saturday and legal holidays, and from 1 to 5 every Sunday, admit free all teachers of public schools and other free schools in Chicago, make a regular financial report to the City of Chicago, give three months’ notice of intention to move, keep the building in repair, and shall make the Mayor and Controller ex-officio members of the Board of Trustees. 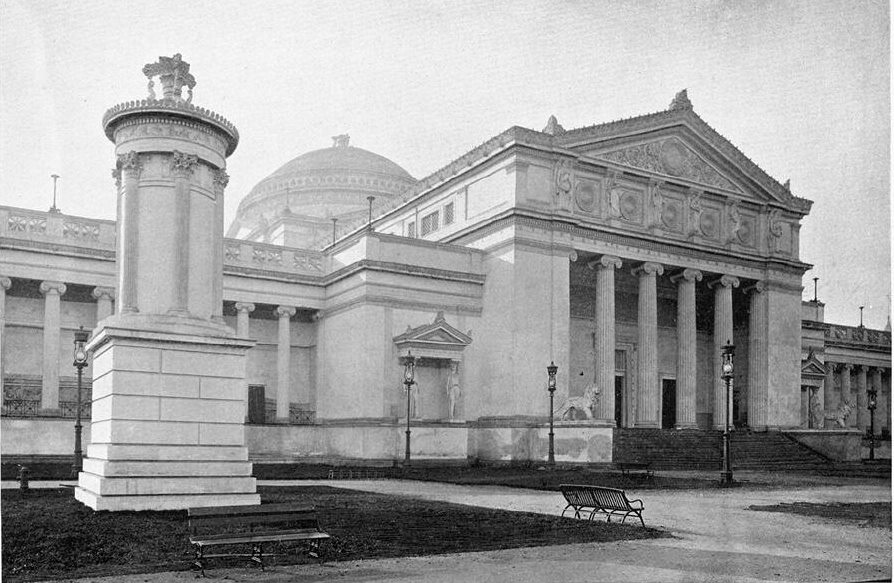 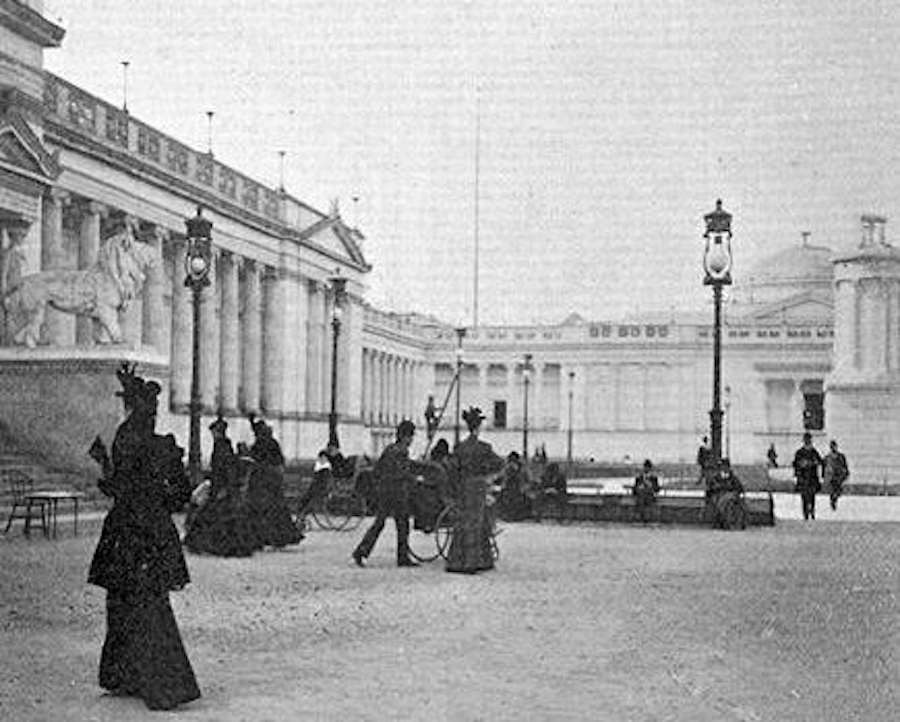 The lions in their original environment, at the Palace of Fine Arts (Museum of Science & Industry), before they were moved to to the Art Institute in 1908

A Half Century of Chicago Building, 1910

The Art Institute
The “Art Institute of Chicago,” beginning with an art school founded in 1866, received its present name in 1883. In 1886 it erected a museum building which soon became too small, and in 1 893 it was sold to the Chicago Club and the present building

The exterior is of Bedford limestone. The broad steps of the entrance are flanked by magnificent bronze lions by E. Kemeys. The building contains two lofty stories of galleries for paintings, sculpture and other works of art, above a lofty basement devoted to the art school. The galleries on the first floor, devoted to sculpture, are lighted by windows, while those for paintings on the second floor are lighted from the roof.

Of special interest from an architectural point of view are the Fullerton Memorial Hall, which seats 500 and is used for lectures, and the Ryerson Library, which contains a splendid collection of books on art.

Another notable room is the Blackstone Hall for architectural casts, 208 feet long, 58 feet wide, and 33 feet high, where are displayed full size casts of many interesting details of European buildings.

This collection of casts, the gift of Mr. and Mrs. T. B. Blackstone, is unique in this country. Some of the casts are 35 feet long and more than 30 feet high. The largest pieces are portals of the cathedrals of Bordeaux, Charlieu, and St. Gilles, and the choir gallery of Limoges.

The various additions to the building have brought the present cost up to over a million dollars and the value of the art collections is estimated at an equal amount. There remains to be built the monumental staircase of marble, which will occupy the center of the building and will cost probably not less than $80,000.

The Art School, maintained in connection with the Art Institute, is the most comprehensive and probably the largest fine art school in the United States.

In concluding this description of the Libraries and Museums of Chicago, we quote again from Prof. Meyer of Dresden. He says of Chicago:

Its architecture exhibits more evidence of an American national style than is seen in the other great cities of the eastern part of the country. In originality, in youthful vigor, and in the astonishing rapidity of its development Chicago excels all, with a prospect of a yet greater future. The motto ‘I will’ is often found on the allegorical figure of the city, and the words appear to me most suitable to indicate the energetic, aspiring character of its citizens. 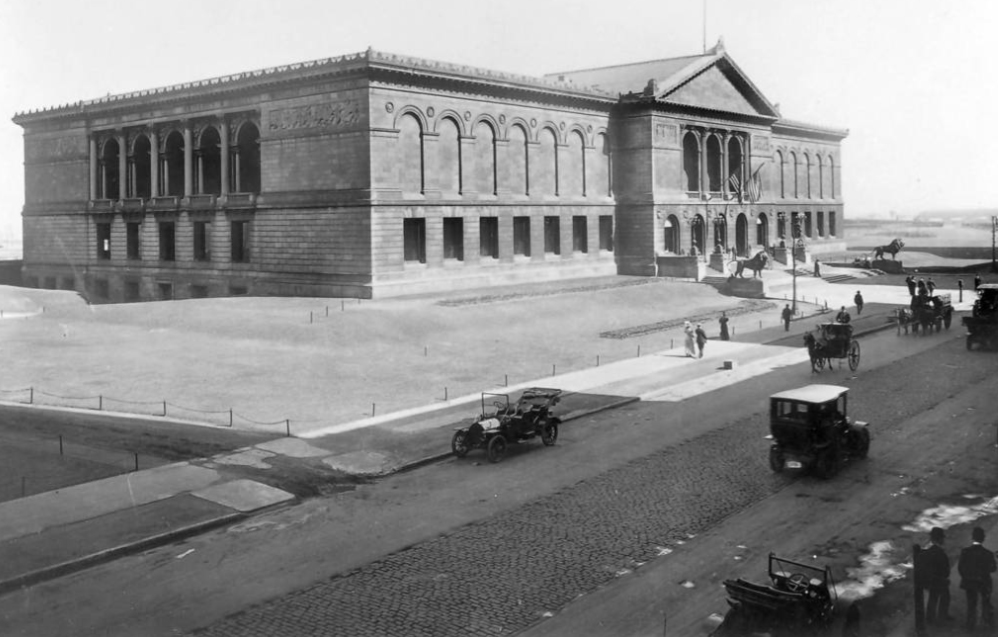 The Art Institute
About 1914 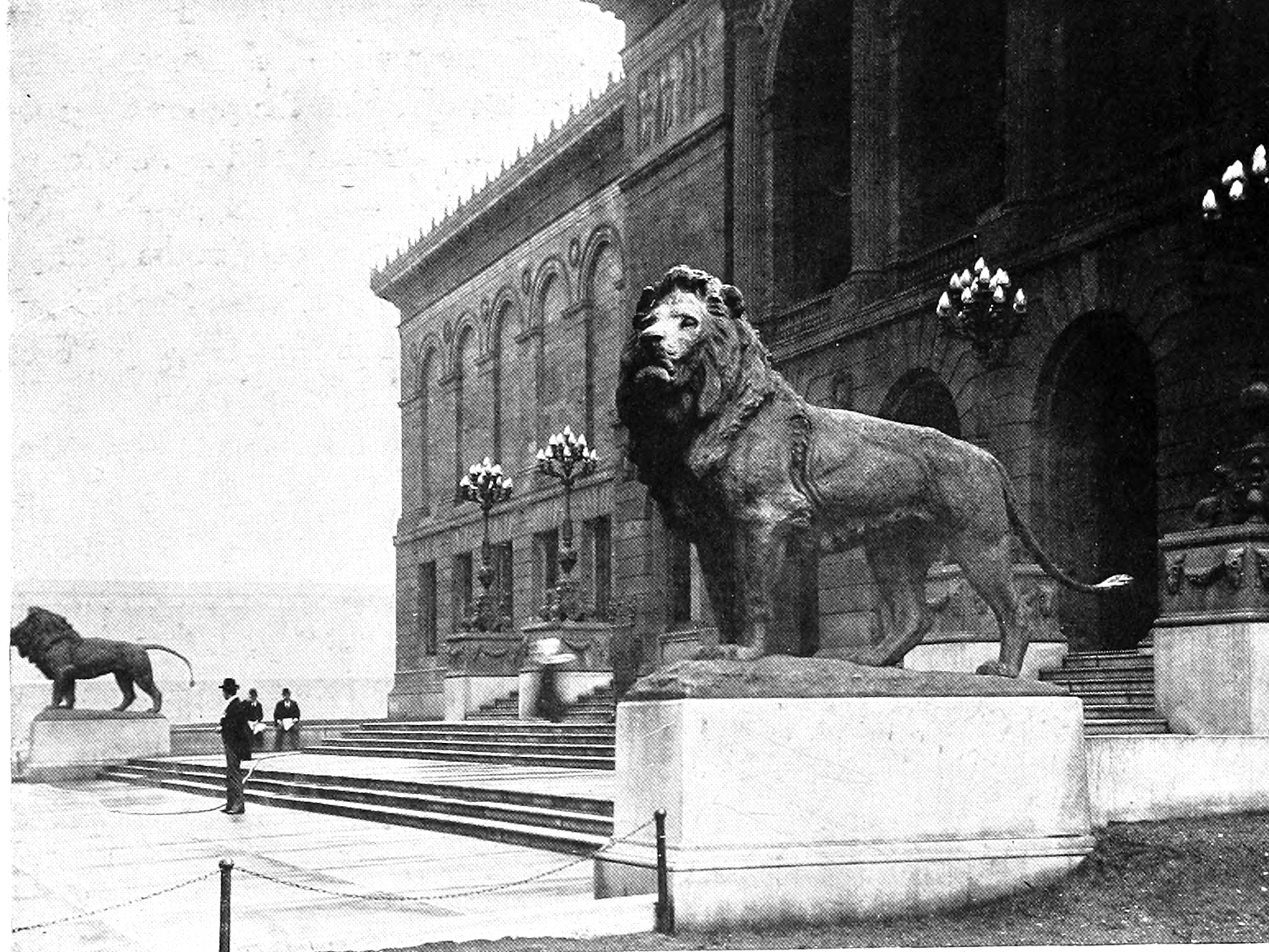 The Art Institute
About 1910

The International Conference on Aerial Navigation was held in this building, August 1, 2, 3 and 4, 1893. This “Opening Address” by O. Chanute was given on 1 August 1893 and was published in the newly established magazine Aeronautics in October 1893. The entire transcript from this conference was distributed and read by many inventors wanting to be the first to perform a heavier than air controlled flight. It was this transcript that prompted Orville Wright to contact Dr. Chanute and they remained in constant contact till the first 1903 flight. 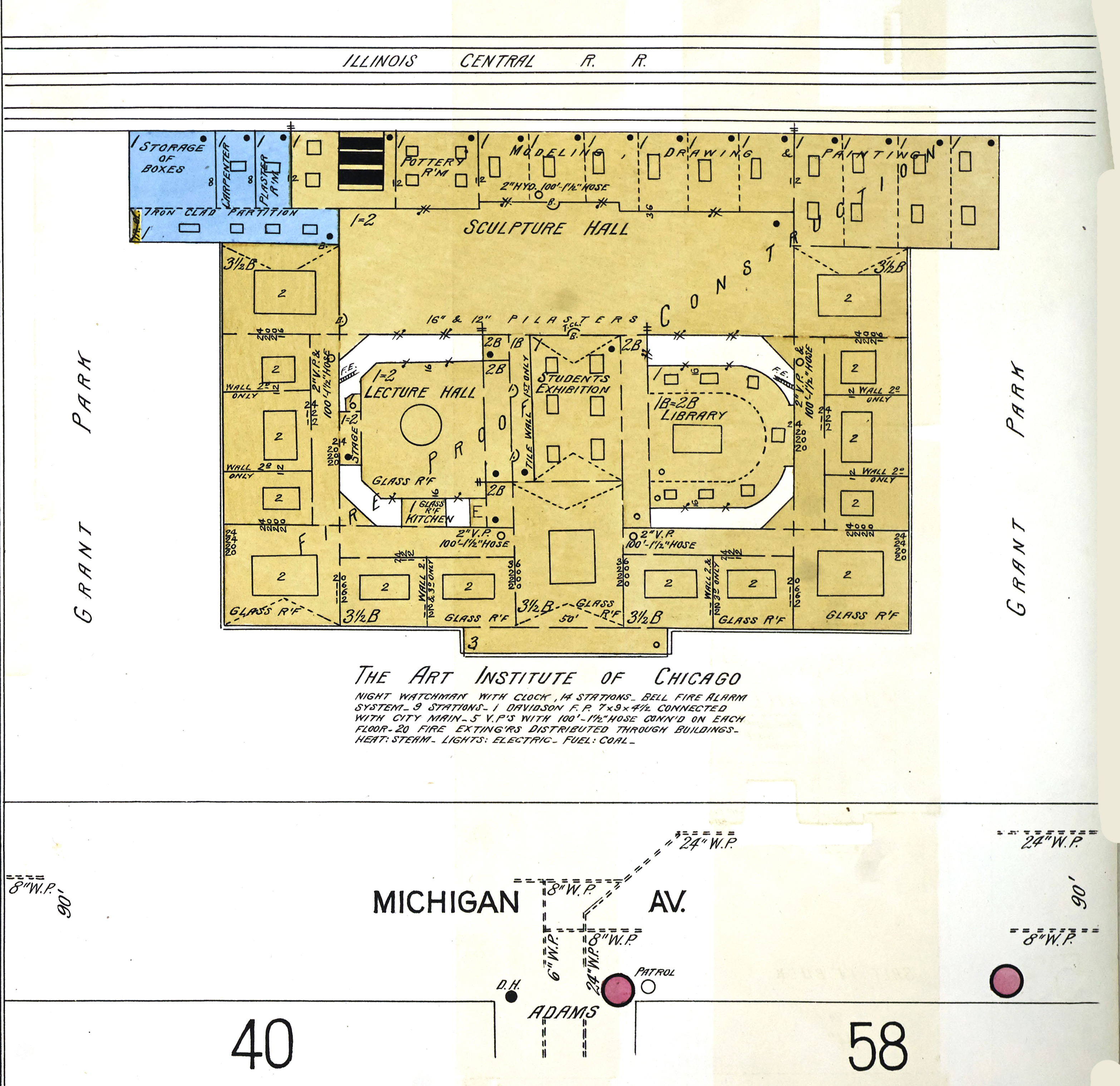