THE WILLARD FOUNTAIN.
Children Invited to Contribute Their Mite to the Fund for This Gift.
The commission for “Willard Fountain.” which is to be a gift to the city of Chicago from children all over the world connected with the Loyal Temperance Legion Department of the World’s W.C.T.U., of which Miss Anna A. Gordon, of Evanston, Ill., is superintendent, has been placed in the hands of Mr. George E. Wade, of London, a rising young sculptor who has recently executed a life-size statue of Sir John Macdonald by order of the Canadian Government, also a bust of the Duke of Clarence for the Prince of Wales, and one of the famous pianist, Paderewski, which that celebrated musician pronounces to be his best. Mr. Wade is now at work upon the life-size model of the fountain which is to be cast in bronze, and which will represtent a little girl—a child of the people—who stands offering her cup of cold water to the thirsty passers-by while the overflow from the cup helps to fill a trough at her feet for horses and dogs. Mr. Wade has admirably caught the idea of expressing in this figure the thought that children are being trained for temperance service, for the very attitude of the child is alert and full of interest in what she is doing, while the influence of the beauty and innocence of childhood will also greatly serve the cause, as the fountain will be reproduced times without number by photography and engraving, and thus its lesson will become familiar in all parts of the world where the white ribbon is worn and loved.

All money raised should be sent to Miss Anna Gordon, Evanston, Ill., and it is earnestly desired that little people everywhere should be impressed with the thought that the mission of love and money which they might perform by giving a cup of cold water to men who might otherwise be drawn into the saloon, can be carried out by this patient little figure, which will never grow “weary in welldoing.” It rests with them to send their pennies if they would be thus represented. 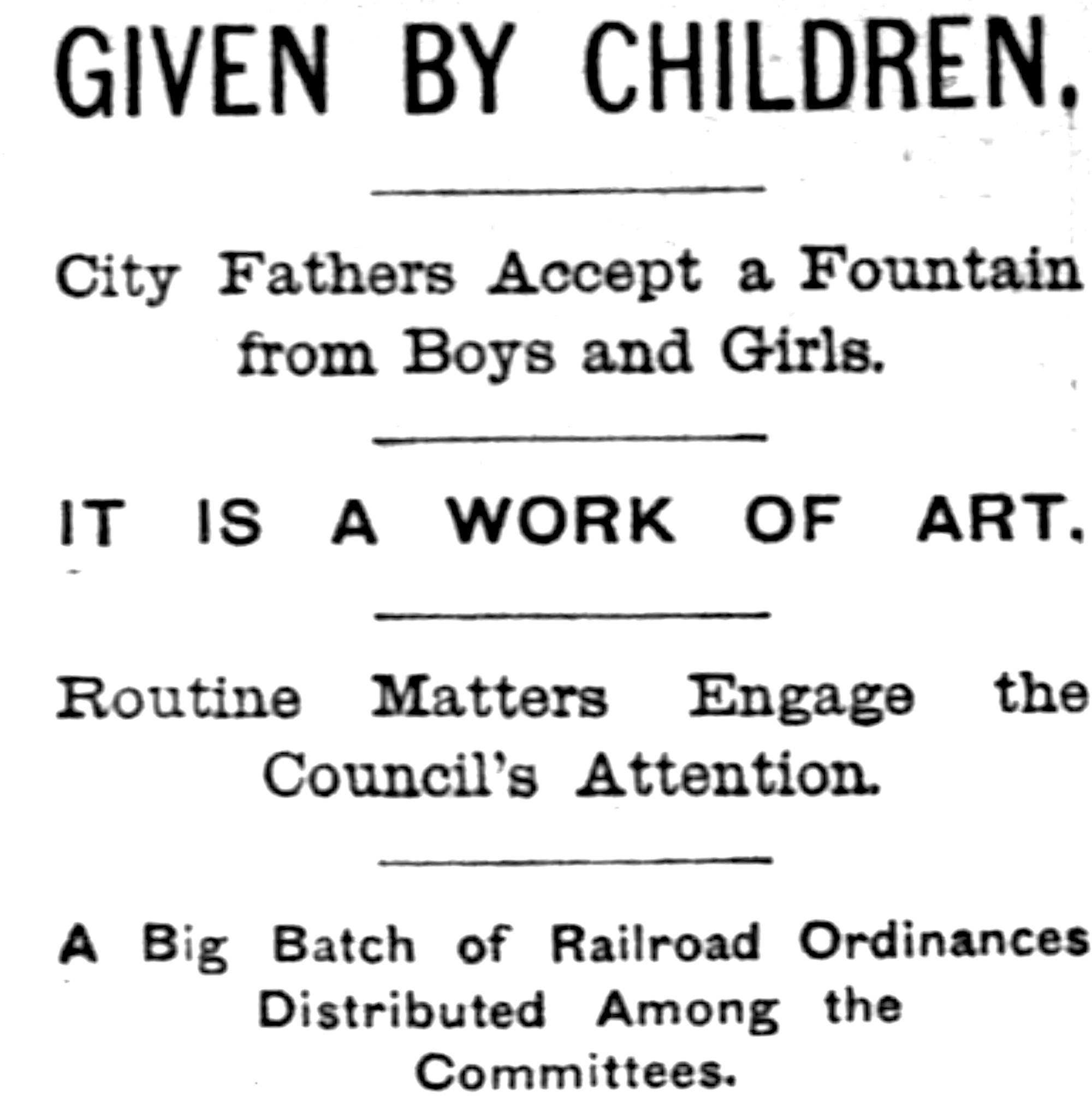 The City Council at last night’s meeting, under the presidency of Mayor Swift, formally accepted George C. Wade’s beautiful drinking fountain, which has been made on the order of 30,000 boys and girls of this and other countries and paid for with their pennies.

The fountain is of bronze, the design being the statue of a sturdy little girl holding a drinking cup in an outstretched hand. It will be placed on La Salle street, near the temple.

Anna L. Gordon, superintendent of juvenile workin the W.C.T.U., made the tender of the statue to the city. Her letter, which was read to the Council, was as follows:

Honored Gentlemen: It gives me great pleasure in behalf of the 30,000 boys and girls of this and other countries to ask your acceptance of a bronze drinking fountain, which they desire to present as their memorial gift to the city which entertained the Columbian Exposition.

The unique figure, a sturdy little child with a cup of water in her outstretched hands, was modeled by Mr. George E. Wade, of London, who has recently executed a life-size statue of Sir John Macdonald by order of the Canadian government, and the design for a handsome granite base includes troughs for horses and dogs.

It is the desire that the fountain should be placed near the Temple on La Salle street. A written acceptance of the bronze from your honorable body will greatly oblige yours respectfully.
ANNA L. GORDON.

Accompanying the letter was a communication from Deputy Commissioner of Public Works Moody, acting in the absence of Commissioner Jones, recommending that the gift be accepted and that the fountain be given a position in front of the Temple building as near the alley as practicable. 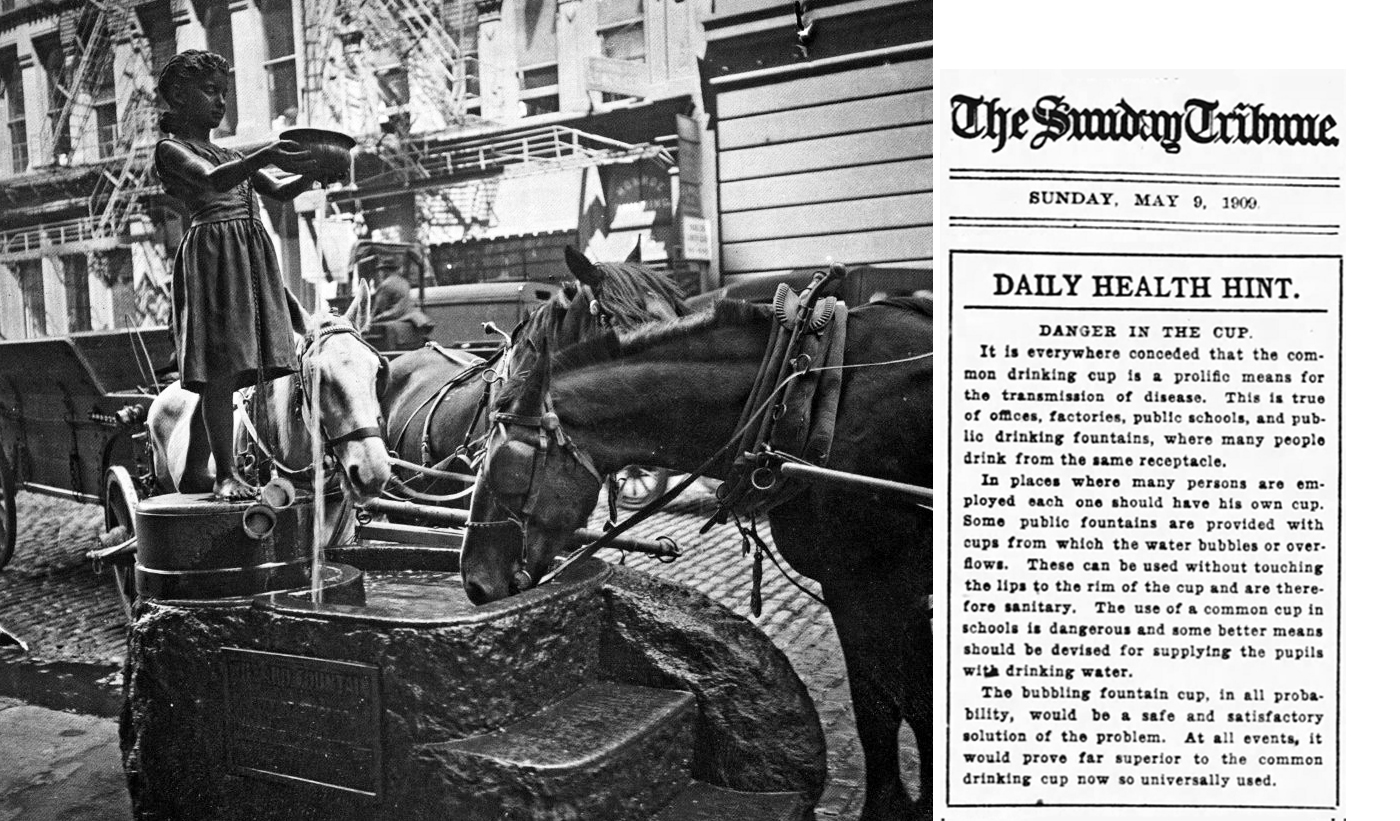 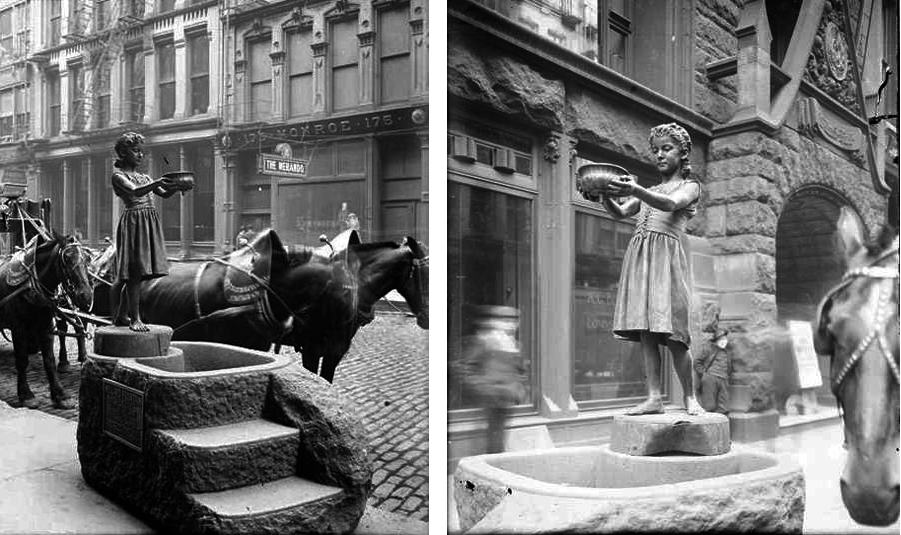 Miss Frances E. Willard came down to her office in the Women’s Temple shortly after 3 o’clock yesterday afternoon. For an hour or more she was busy with the meeting of general officers.

She said, “This was our first meeting to make plans for our national convention which will be held at Music Hall, Cleveland, Nov. 18 to 21. It will be the celebration of coming of age of the society, and will be held in the very city where twenty years ago the crusade was begun. Perhaps Lady Somerset may come here.”

Sept. 28 is Miss Willard’s birthday. It will be celebrated by the unveiling of the Cold Water Girl, a fountain built by Mrs. Anna Gordon, who collected $3,000 in pennies from children. The fountain will be placed in front of Willard Hall. Miss Willard, it is expected, will make the speech at the unveiling.

The presentation speech was made by Mrs. V. H. Danforth, Mrs. Carse responding on behalf of the Board of Temple Trustees. She said in part:

It is indeed with sincere gratification I accept on behalf of the Temple trustees, this beautiful fountain from the white-ribboners of Chautanqua County, N.Y. It is the crowning jewel of this mobile corridor—exquisite in design and glowing with the beauty which richly veined alabaster, rare marble, and costly bronze cam assume when the cunning band of the artisan has fashioned and polished it into lines of grace and grace and beauty. Great credit is due Jules Wegman, who designed the fountain, and to our eminent Danish sculptor, Carl Rohi-Smith, who executed the bronze work; also to William H. Burke, under whose direction the alabaster and marble were selected in Italy and fashioned into their present beautiful form. Intrinsically, this fountain of great value and rare beauty. It far surpasses anything of the kind in this Western metropolis. Yet its value and and beauty sink into insignificance in comparison with what represents—that which you and your noble constituents desire by this memorial to impress on the hearts of coming generations.

The fountain stands in a corner on the left of the entrance to Willard Hall. At the unveiling Miss Willard spoke. She also spoke feelingly to those present in the main hall, thanking them for their welcome and for their continued earnestness in temperance work. The busts of Miss Willard were unveiled and the audience separated after singing, “We Are Marching to Canaan with Banner and Song.”

The Chautauqua fountain is made of marble. It is twelve feet high and five feet wide. Its carving is elaborate. In the center is a bronze Cupid three feet in height. The Cupid drives a dolphin from whose mouth a stream of water flows into a basin beneath. Cupid holds the reins in one hand and holds a trident in the other.

The Willard fountain was not unveiled yesterday owing to disappointment in getting water connections. 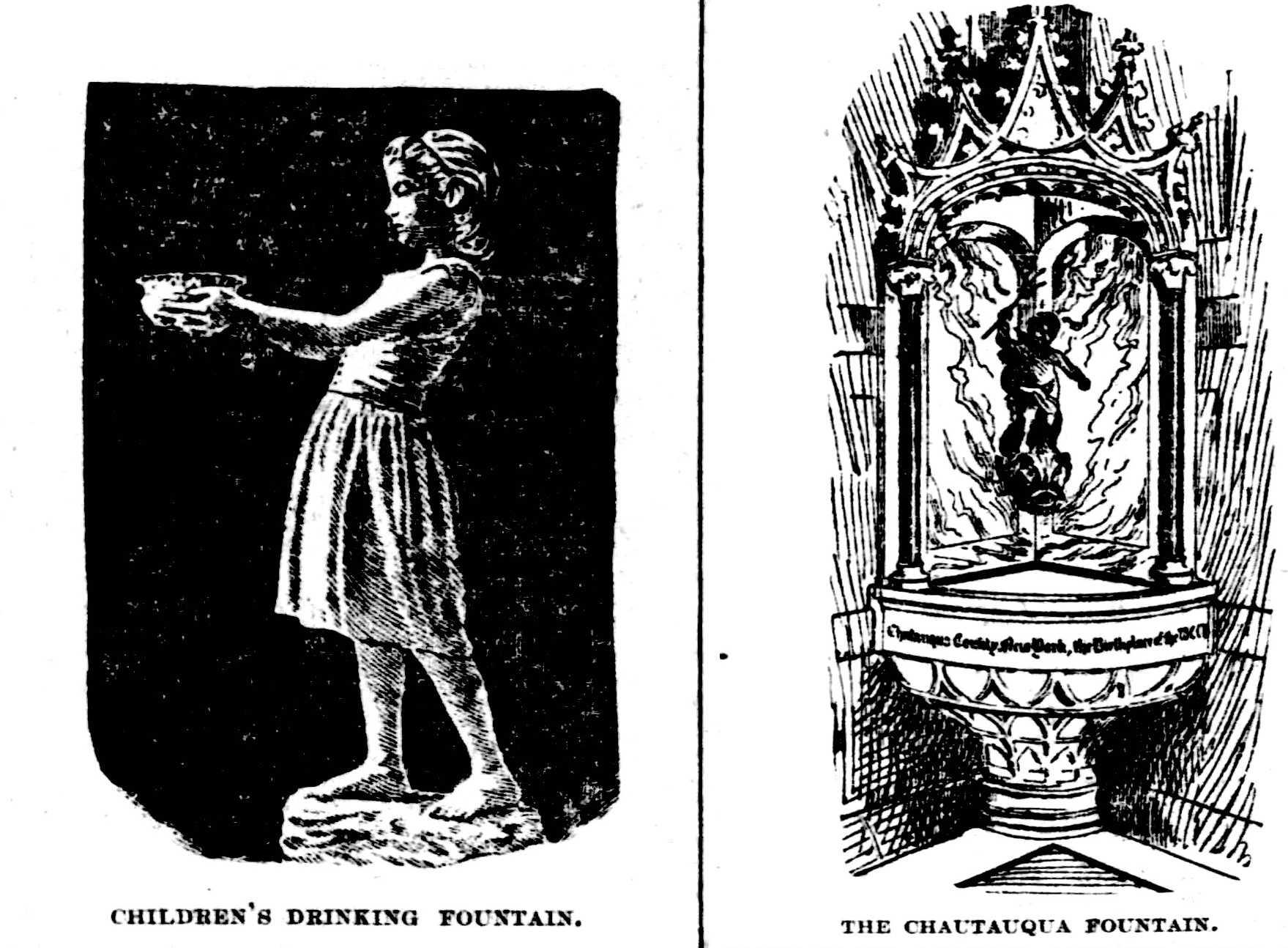 A duplicate of the Willard fountain, presented by the children of the world to Chicago in the Columbian year and called “The Little Cold Water Girl,” is to placed on the Westminster embankment, London, and called the Somerset Fountain, in honor of Lady Henry Somerset. The children of Great Britain have aided in collecting the funds, and Mr. George Wade, the celebrated London sculptor, executed the work, although the design was that of Miss Anna Gordon, superintendent of temperance work among the “children of the White Ribbon Army.” 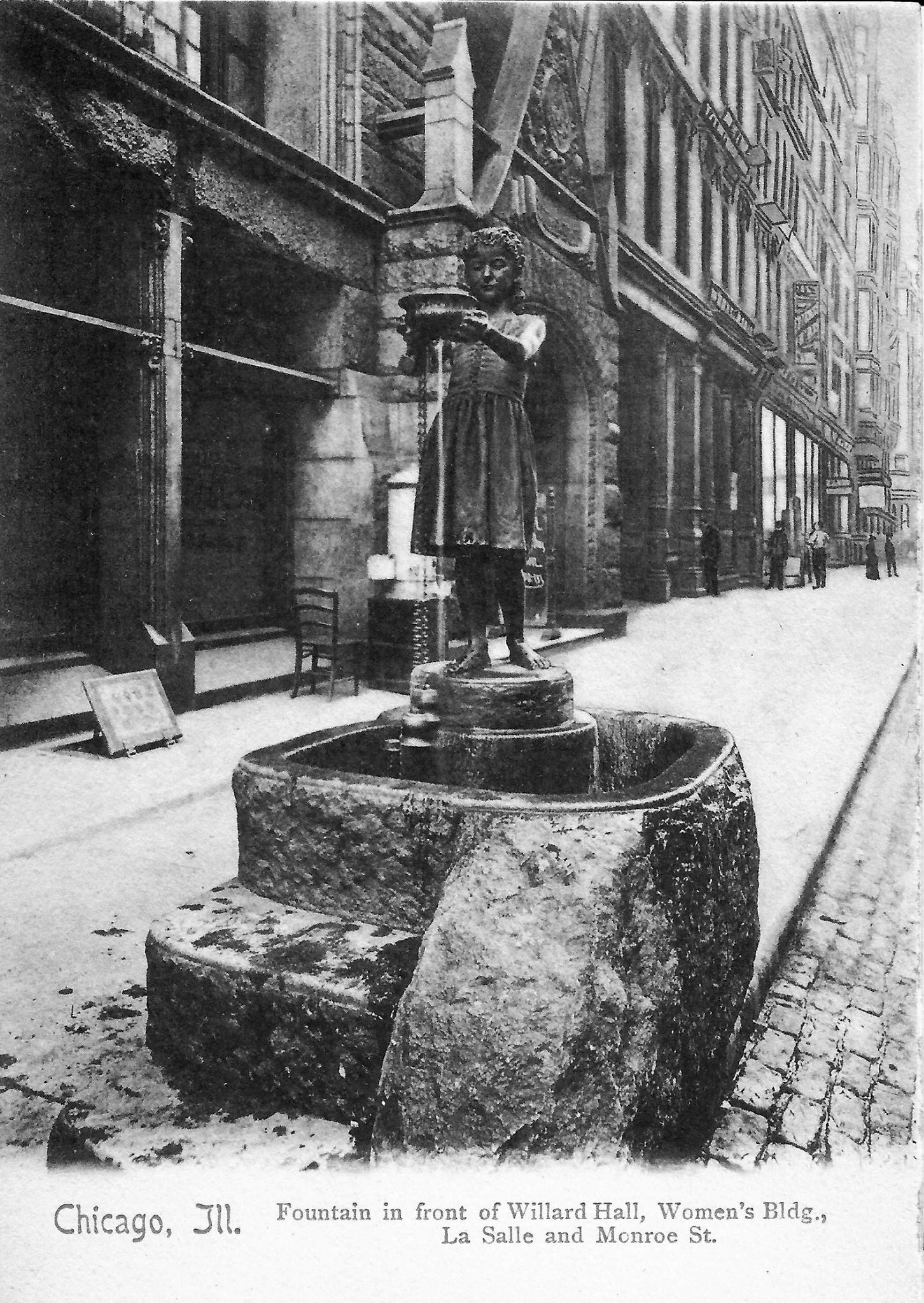 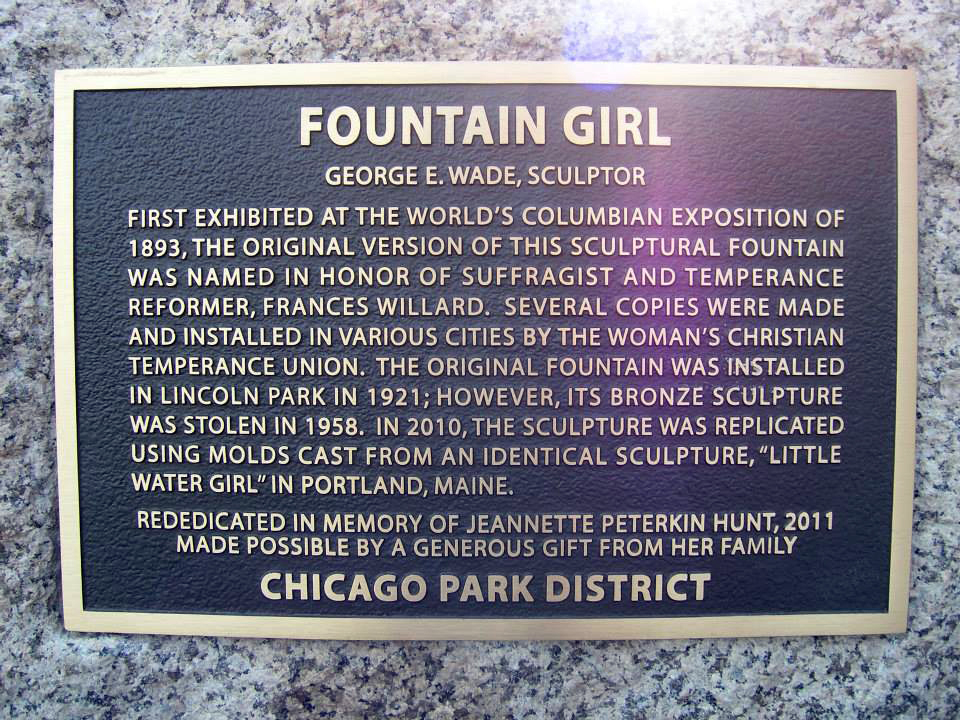 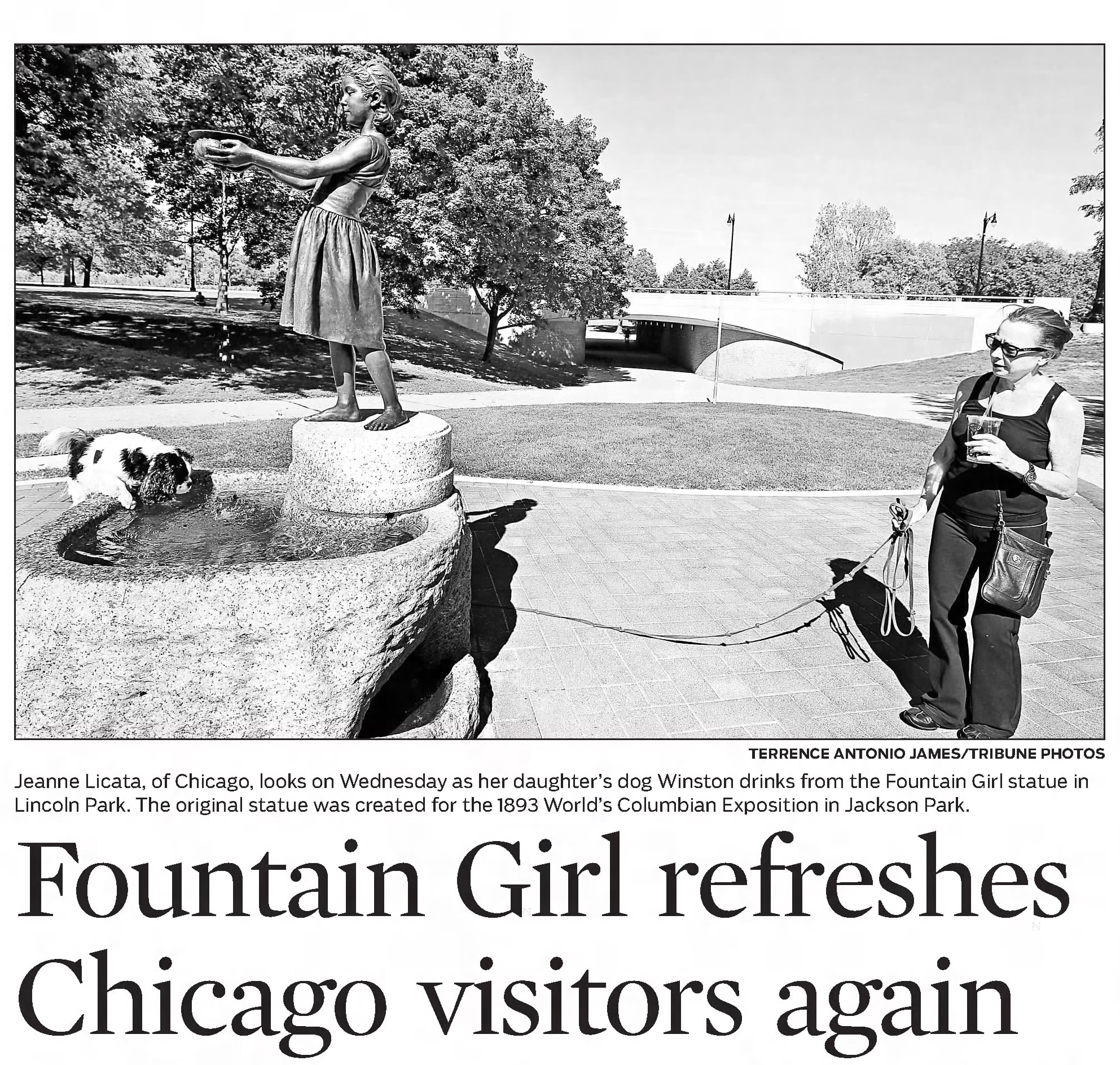 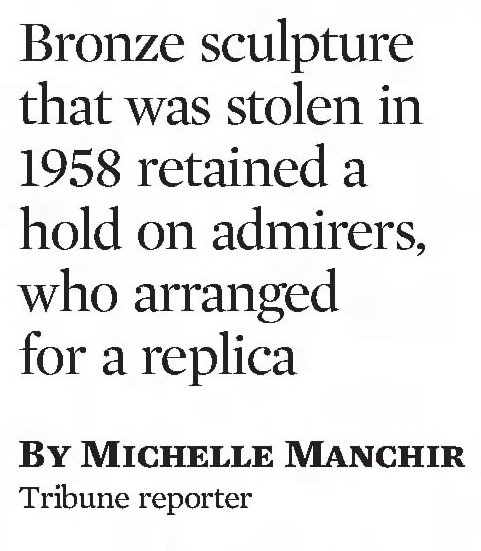 The bronze statue of a little girl offering water from a basin atop a stone structure had been missing from Lincoln Park for almost 60 years.

On Wednesday, a new version of the statue, known as Fountain Girl, was officially welcomed back by the Chicago Park District during an unveiling ceremony at the gateway to the park just east of the Chicago History Museum.

The original 4-1/2-foot-tall Fountain Girl disappeared in a crime that remains unsolved.

Several years ago, a woman who remembered playing near the statue as a girl approached officials and asked how the statue could be brought back. In 2007, private donors including that woman — who has requested anonymity — along with the Park District, the state and the Lincoln Park Conservancy started an effort to raise money for a new statue. 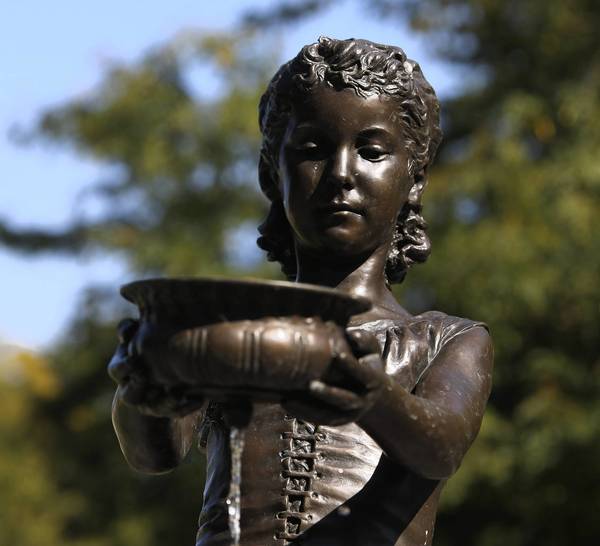 Making a new Fountain Girl wasn’t an easy task. Park District officials tracked down a copy of the statue in Portland, Maine, and had to get permission to make a mold so it could be replicated and the girl could stand once again in Chicago, said Cindy Mitchell, a former Park District commissioner who spoke at Wednesday’s event.

Until a few weeks ago, the stone base of the fountain stood by itself in the park.

“You’d walk by and you’d think, ‘What is that?'” Mitchell said. “And now it’s just back to perfect.”

The original statue was created by English artist George Wade in 1893. The Woman’s Christian Temperance Union commissioned the work in an effort to offer an alternative to liquor — fresh water — to visitors at the World’s Columbian Exposition in Jackson Park, according to park officials.

Fountain Girl was moved to the Loop for a time before landing near Lake Shore Drive and North Avenue in Lincoln Park in 1921, park officials said.

When the Lake Shore Drive construction project began in the 1930s, Fountain Girl went into storage until it was installed again near where it was unveiled Wednesday, just south of the West LaSalle Drive underpass. There it stood until 1958, when it was stolen, most likely for the value of the bronze, Mitchell said.

“We kept saying, ‘Oh, it will turn up in someone’s backyard, (but) finally we realized we’ll never have it,'” said Sarah Ward, a former president of the Woman’s Christian Temperance Union who attended Wednesday’s ceremony. “To think that they have recreated it for us is wonderful.”

Moments after Wednesday’s event, a pair of dogs walking with their owner lapped up water from the fountain, to the delight of community members and park employees who lingered nearby.

Unlike in years past, people should refrain from joining animals in drinking water from the sculpture, said Marta Juaniza, a Park District spokeswoman.

“It’s not potable, but the bottom should be OK for dogs.”