The American Bell Telephone Company and the Western Electric Company have their structures inside the Electricity Building to accommodate their exhibits. The former occupies a commanding position directly in front of the main entrance at the south end of the building, and gives promise of being very complete. It occupies a space 100 feet long by 75 feet wide, and is raised four feet above the floor of the building, broad stairways leading up to it at each end. A railway track has been laid the entire length of this building on the east and also on the west side, so that with two large temporary electric elevators, just completed, exhibits should be speedily handled and installed. 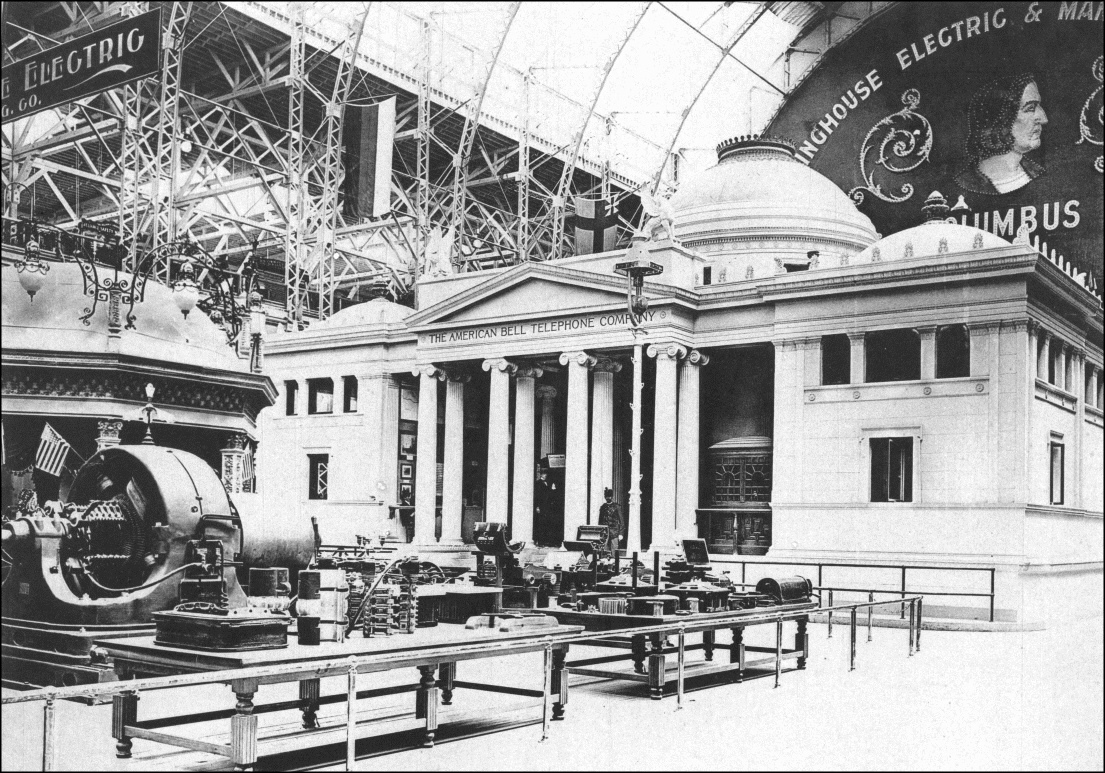 Close at hand of the Egyptian temple is a switchboard composed of slabs of Tennessee marble mounted in bronzed copper, from which issue the currents which supply both these structures, its reverse side showing the various connections, and the entrance and distribution of the circuits which originate in the company’s plant at Machinery hall, half a mile away. Near the switchboard are various machines used by the company in manufacturing processes, including those which make nuts and screws, which insulate wires with silk and paper, braid the strands of conductors, and wind them upon spools, and perform a score of operations formerly done by hand. A complete exhibit of telephone apparatus is a feature of the display, including machines made by its factories in New York. Chicago, and Antwerp, and those constructed for the American Bell Telephone company. There is a large array of switchboards, showing the different styles fashioned within the past decade, with reels of cable covered with lead, and insulated with paj instead of cotton and paraffine.

In this section is the tabulating machine used in United States census work, and an ingenious mechanism whose long finger, terminating in an incandescent bulb, is continually writing in air the words. Western Electric company. Batteries and incandescent lamps are elsewhere grouped, and a portion of the space is occupied by a small scenic theatre presenting an alpine landscape, over which are cast the changing hues of night, dawn, midday, and sunset, thus show ing that with skillful manipulation electric light max be shorn of its coldness and hardness, and endowed with all the rich colors of the natural rays. In a historic collection is a large portrait of Moses G. Farmer, and a handbill dated 1847, advertising the public exhibition of his recently invented electro-magnetic engine. The Farmer electric cars and incandescent amps are still among the specialties manufactured by the company.

Adjoining the exhibits of the Western Electric company is a classic structure, with two large porticos, representing the American Bell Telephone company. At its main entrance is a broad stairway, guarded by two figures of the sphinx, over which are large candelabra of bronze, and a row of Ionic pillars opening into a court containing fountains of tasteful design. Beyond is the temple proper, octagonal in shape, through which one may pass to the opposite entrance, or examine the collections in either of the side corridors.

On one of the walls are tabulated statements showing the growth of the company’s business from 1881 to 1893, and from which it appears that in the former year it employed 1,400 persons, and in the latter nearly 10,000; that at the present time it operates more than 440,000 miles of wire in and between the larger cities, and that 552,000 of its telephones are in constant use. The map on which is represented its system of long-distance telephones indicates that Boston, Washington, and Milwaukee are at its extremities, with lines between all connecting points of importance. Telephones for the use of marine divers and those who travel by water are also on exposition.