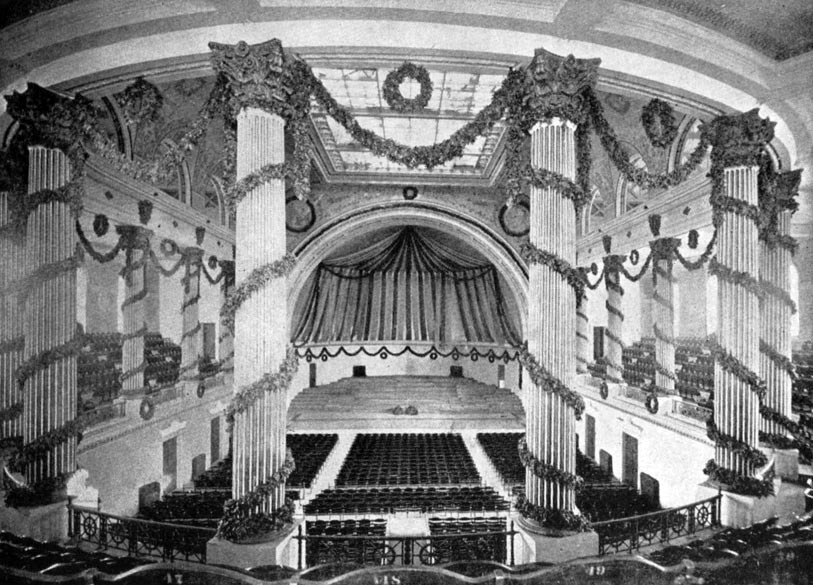 The Music Hall, which is located on the shore of Lake Michigan at the northerly end of the great Peristyle, is 140 feet wide by 246 feet long, and about 05 feet high. The main audience room is in the center of the building, and is 126 feet long by the full width of the same, and occupies the full height of the structure. The space for the orchestra and chorus is at the east end, and it is in the form of a great hemicycle or recess, which opens into the main hall by an arch 66 feet wide and 54 feet high. This recess is semi-circular in plan at the rear and 50 feet deep from the front of the arch to the back of the circle. The ceiling of this recess or hemicycle is shaped like a quarter section of a sphere, so that the sound of the music is projected forward into the audience room. Just outside of the arch on the main floor is the platform for the orchestra with the chorus rising behind on a series of wide steps. To the west of the orchestra is the parquette. which will seat from 800 to 1,000 persons. These seats are also arranged on wide steps or platforms which rise gradually to the rear en’d, thus giving an uninterrupted view of the stage and conductor to every person. All around this parquette, except on the side occupied by the stage, is a loggia or passage about 20 feet wide, connecting with the main hall by many wide doorways, thus giving ample space for the entrance and exit of the audience with comfort and celerity. Above this loggia, which is about 20 feet high at the exterior wall and 14 feet high at the inner wall next the parquette, is the great balcony, which will seat about 1,200 persons. The seats here are also arranged on rising steps, so that every one can have a perfect view of the stage and of the audience in the parquette below. The seats of the balcony sweep round in a semi-circle at the west end opposite the stage, thus giving the audience room and the stage combined the form of a great oval. Around the front of the balcony are Corinthian columns which support the roof, and over the inner space is a large skylight which gives ample light by day. Around the rear of the balcony are also a series of large windows commanding a view of the great court on the south and the lake on the north. The main entrance is at the west end through three wide archways into a great vestibule 60×80 feet, and thence through three great openings into the loggia about the parquette. On each side of this vestibule are wide and easy stairways, giving access to the balcony and second story of the building, and over the vestibule is a smaller hall 60×80 feet in size, which is for a recital hall, etc. Opening off this hall are several rooms, used for offices or dressing rooms, about 25×40 feet each. Opening upon the vestibule, loggia and the balcony above are large and numerous dressing and cloak rooms of about the same size as above. At the other end and opening from each end of the orchestral platform are rooms for the accommodation of the Director of Music and the principal singers and performers, with ample toilet rooms connected therewith. At the rear of the hemicycle are large rooms for the chorus, and reached by private entrances directly from the seats. Above these rooms are others of the same size which are used for meetings and as offices for the Bureau of Music. There is a third floor, which also contains several large rooms for general purposes. On this floor and over the balcony is a large standing place of the same size as the balcony below, which opens upon the main hall, through a series of arched openings in the coved ceiling of the audience room, which will hold a great many people in case of an extra occasion, and is reached by ample stairways. The interior of the hall is richly decorated in color, with emblematic paintings on the face of the east wall above the great arch, and in the panels of the ceiling. It has been specially planned for acoustic effect. The great arch of the hemicycle is richly ornamented with architectural detail, and the whole can be brilliantly lighted by electricity in the most novel effects. The architecture of the exterior is, like that of the Casino and Peristyle— Roman Corinthian —and richly ornamented in detail. Around the entablature above the columns are inscribed the names of the great composers, and on the pedestals of the balustrade surmounting the cornice are placed many statues, 12 feet high, emblematic of the art of music. 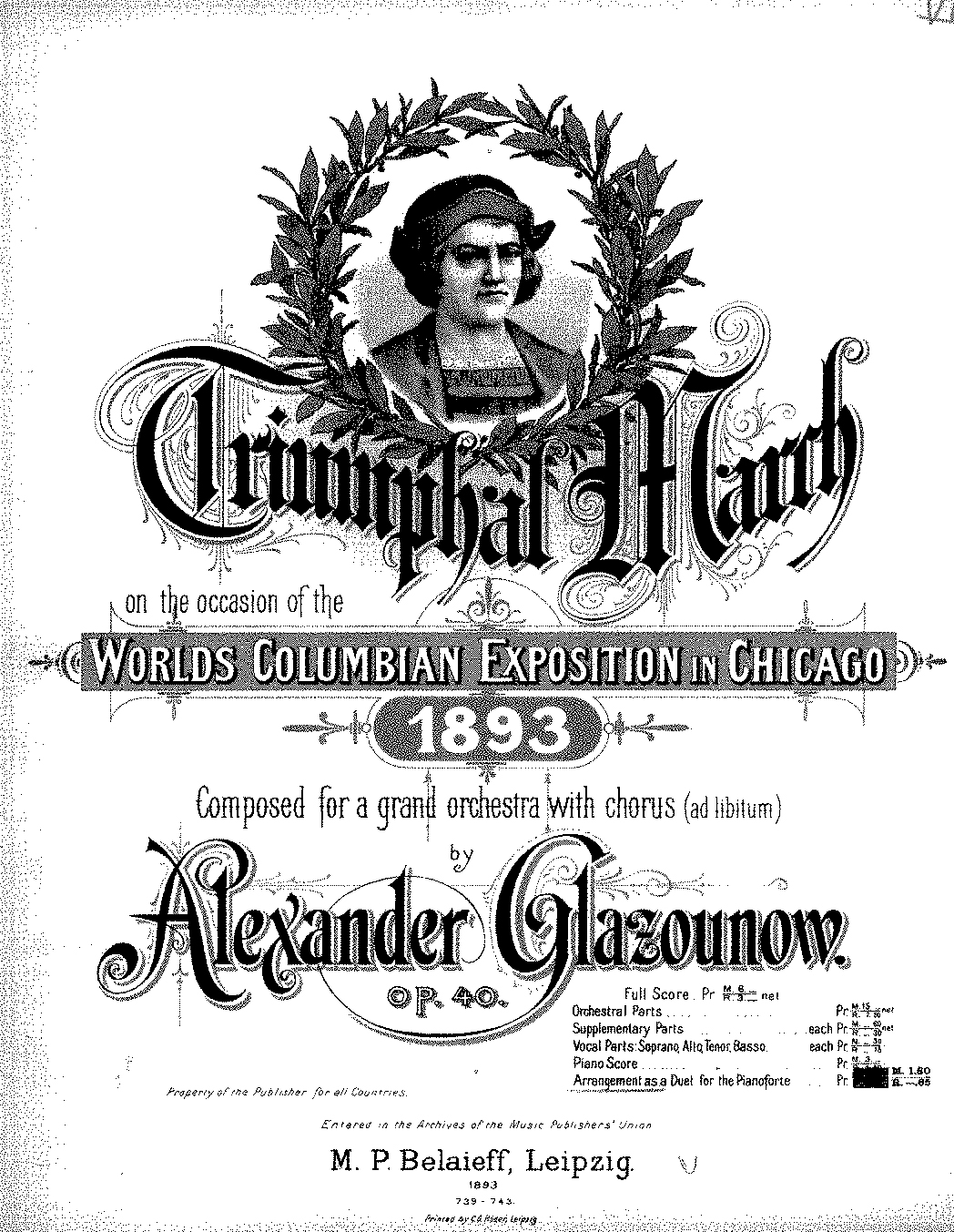 Sheet Music for the Triumphal March on the Occasion of the Worlds Columbian Exposition in Chicago, 1893

The Festival (Choral) Hall stands upon the shore of the lagoon at a point where the two great promenades meet. Its location enables it to be seen from distant parts of the grounds across the lagoon with its beautiful wooded island and green shores. To one side stands Horticultural hall, while Transportation hall stands on the other. The style of the building, which is Doric, makes it simple and severe in treatment; its form, which resembles an amphitheater surmounted by a dome, gives the building, both externally and internally, a-rounded form, from which project on the four sides porticoes, the one facing the lagoon being the principal entrance, and enriched by fluted Doric columns six feet and a half in diameter. From the portico leads a flight of spacious steps, at the foot of which stand two statues, being reproductions of celebrated marbles of Handel and Bach. On either side of the portico are panels in relief work representing the progress of music, and in the panels over the doors are relief portraits of Gluck, Berlioz, Wagner, Schumann, Schubert, Mozart, Mendelssohn, Bach, Handel and Beethoven. The interior has the form of a Greek theater, except that the chorus of 2,600 voices occupies the part assigned by the Greeks to the stage, and thus it becomes amphitheatrical in form. There are no galleries of any kind to obstruct the view or sound. The building will seat 6,500 persons. The decoration of the interior is in the same order as the exterior in relief work and color. A large foyer extends around the building, giving ample room for promenade During the 1892-1893 Columbian Exposition, several orchestral works had their world premiere and performed by the Chicago Symphony Orchestra.

Glazunov’s Triumphal March are underpinned by Glazunov’s use of “Battle Hymn of the Republic” throughout. Still, much of the music has a strangely pastoral, even English quality–Glazunov’s nod, perhaps, to the European origins of many American citizens. Glazunov employs a wordless chorus as part of the performing forces in order to celebrate, as he noted, the “dawn of liberty.” In all, the Triumphal March is a fascinating character sketch with multi-nationalistic overtones.

Several World Premier pieces were performed here during the Fair.

Margaret Ruthven Lang – The first public performance of her work came early in her career when in 1887 four of her songs were programmed at a local recital. Her debut was followed by further critical success and she soon reached an important milestone, especially for a woman – recognition as an orchestral composer. In 1893, the Boston Symphony Orchestra programmed Lang’s Dramatic Overture and it became the first orchestral work written by a woman performed by an American orchestra. In the summer of the same year, another overture, Witichis, was heard at the Columbian Exposition in Chicago.

The opening of the Woman’s Building at the Chicago World’s Columbian Exposition on 1 May 1893 was celebrated with speeches by women and performances of three large orchestral works written by women composers. The Chicago Tribune described the striking setting in the main hall:

A Long room, whose arches and columns were decorated delicately in white and gold, whose walls were hung with the praiseworthy products of nineteenth century woman artists – this is what met the vision of those who enetered for the first time!

The World’s Fair Chorus participated in a concert in the Hall of Honor that was devoted entirely to music by women composers. The ceremonies began with a Grand March composed by Ingeborg von Bronsart of Weimar, Germany. Also included was the Dramatic Overture, a work written in 1886 by Frances Ellicott, daughter of the Bishop of Gloucester, England, for that city’s Three Choirs Festival. The featured work was Festival Jubilate by Boston composer Amy Marcy Beach (Mrs. H. H. A. Beach), that had been commissioned for the Exposition’s October 1892 dedication ceremonies but subsequently rejected from that program. The works were performed by Theodore Thomas conducting the Exposition Orchestra, a group composed primarily of members of the Chicago Orchestra, predecessor of the Chicago Symphony Orchestra. 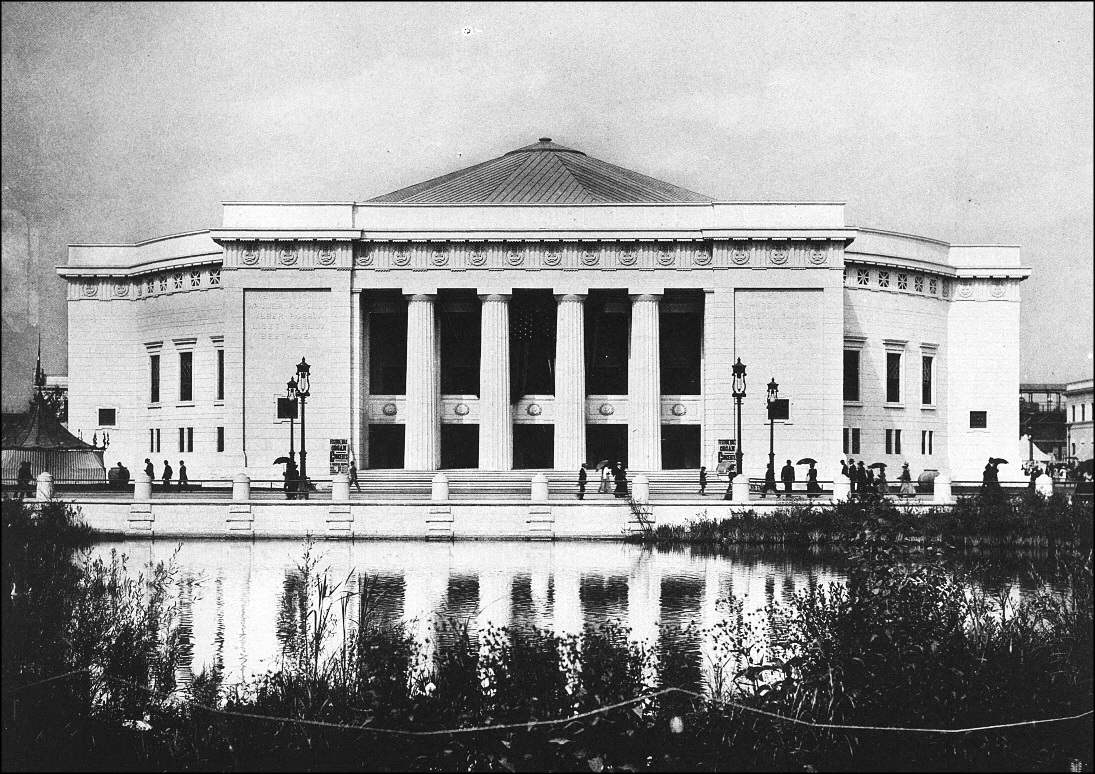 The Bureau of Music, composed of Theodore Thomas, Musical Director; William L. Tomlins, Choral Director, and George H. Wilson, Secretary, has announced the following plan in general for music during the six months of the Exposition: