There is, in Chicago, a street of endless dreariness, a street curiously uninteresting to the casual glance and more and more uninteresting to the lengthening look. Yet the touch of genius made this street seem one of the most fascinating streets of the world, in humanity, in humor, in tragedy and kindness. It is Archer Avenue, in earlier days Archer Road, made by Finley Peter Dunne into “Archey Road.” It was one of the earliest streets of the city, stretching away from the center and far out toward the wilderness. Finley Peter Dunne originated “Mr. Dooley,” and placed him on “Archey Road,” and proceeded to fascinate all America.—Robert Shackleton, “The Book of Chicago,” 1910

On a December day in 1892, when bowler-hatted Chicagoans were talking more of their forth-coming World’s Columbian Exposition than they were of the near approach Christmas, the chief editorial writer of the Chicago Evening Post, a gifted young Irish-American named Finley Peter Dunne, dropped into his favorite saloon, McGarry’s on Dearborn street, and heard witty, white-vested old Jim McGarry make a few caustic remarks on the then recently deceased financier, Jay Gould. 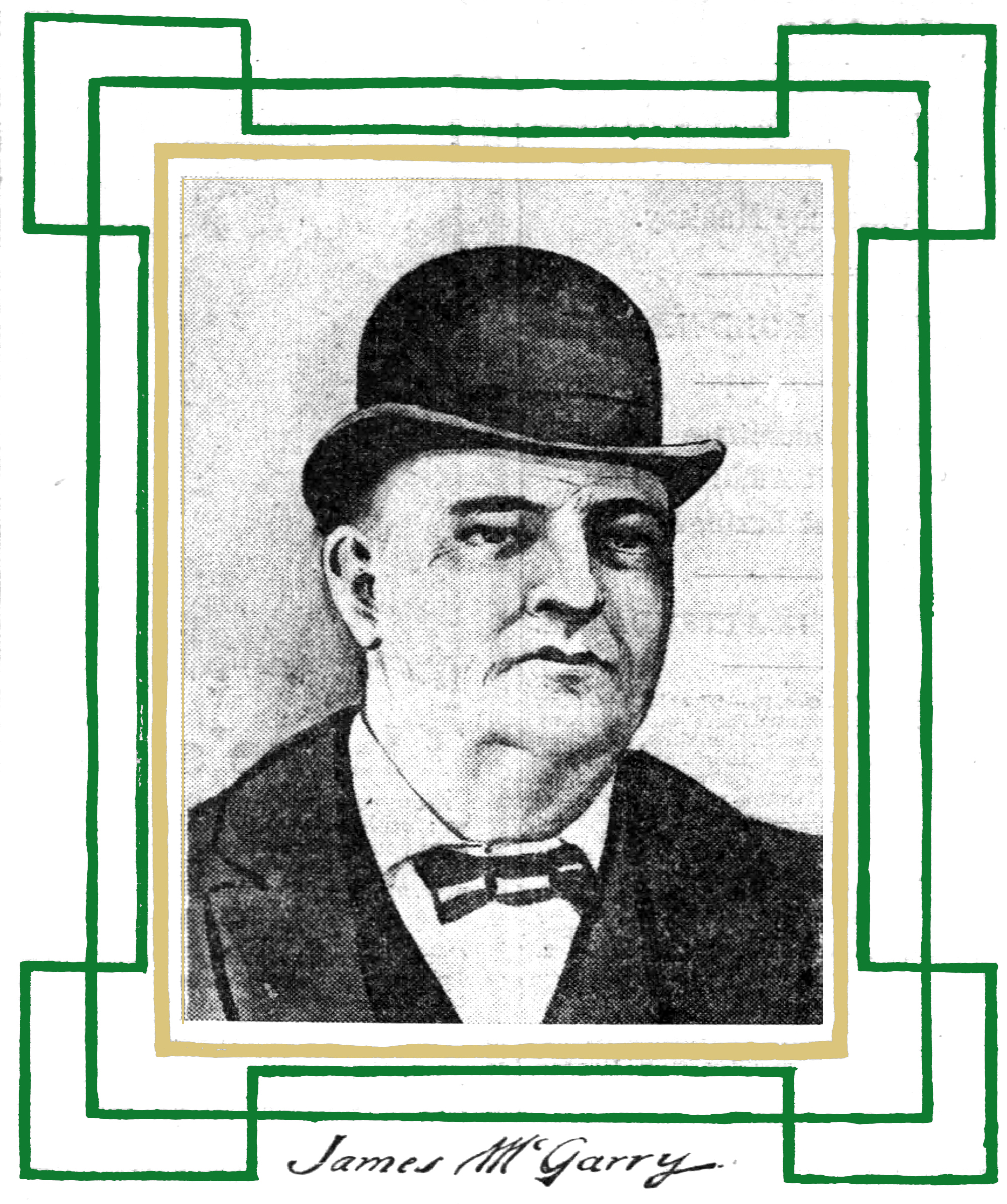 What McGarry said seemed to be funny, and yet so full of common sense to the youthful Peter Dunne that he went back to the gas-lit office of the Post, dashed off a piece about a wise-cracking Celtic saloonkeeper, and thereby brought into being what was to become America’s most famous nonexistent Irishman.

That Irishman is, as almost every American of the older generation knows, the celebrated barkeeper-philosopher, “Mr. Dooley.”

Altho the Chicago-born Finley Peter Dunne is long since dead, and altho “Mr. Dooley in the Hearts of his Countrymen” and other once best-selling volumes have all but disappeared from the bookshops of the nation, it would be a mistake to assume from the great Windy City beer barrel philosopher is forgotten; that he now belongs to the buried past. He is as much alive in the hearts of his countrymen as ever.

Just as in days gone by the sharp sayings, the down-to-earth pronouncements of the shrewd Mr. Dooley were quoted by Presidents and unbiversity heads, by congressmen and editors, so at present is he quoted frequently in legislative halls, editorial sanctums, and business offices, altho a bit shorn of his rich, racy Irish brogue.

In particular, what this immortal bartender had to say about war and rumors of war in “Mr. Dooley in Peace and in War,” which dealt with the Spanish-American conflict in 1896, is, according to contemporary authorities, just as pointed and pungent today as in the time of President McKinley and Admiral Dewey.

The truth is, the fictitious Mr. Dooley did not quite spring quite so suddenly out of real life, out of the portly person of the living Mr. McGarry of Dearborn street, as we indicated in the beginning. Altho, as is now generally agreed, Jim McGarry did provide the original spark of inspiration, our legendary philosopher actually was Finley Peter Dunne himself.

In a sense, Mr. Dooley had his inception in St. Patrick’s parish, for it was in that one Irish parish on the near west side that Finley Peter Dunne was born, grew to manhood, and learned (as well as inherited) the with and wisdom of the Gaelic race—qualities that are fundamental in the character of his renowned literary hero.

An indication of how closely Peter Dunne was linked to St. Patrick’s church may be gained from a number of facts:

He was born (July 10, 1867) in a house on Adams street, almost across the church.
He was baptized by his cousin, the Rev. P. W. Riordan (afterward archbishop of San Francisco).
And, at the time of his haptism, his uncle, the Rev. Dennis Dunne, was serving as vicar general of the archdiocese of Chicago. Previously, Father Dunne had been pastor of St. Patrick’s church.

Son of a serious, devout Irish carpenter and of a somewhat intellectual Irish mother who loved books, young Finley Peter Dunne was given his education in the Scammon school and his secondary education in the old West Division High school. In 1894, when he was 17 years old, Finley Peter Dunne entered Chicago journalism as a copy boy on the Chicago Telegram. In a month or two he was promoted to police reporter.

After a few months, Dunne was invited to join the staff of the Chicago Daily News as a reporter and assistant editorial writer, and there he met and was much influenced by Eugene Field, now famed in American literature as “The Children’s Poet.”

Dunne remained on the News until 1888, at which time he became political reporter on the Chicago Times. Not long afterward, he was promoted to city editor—the youngest such editor in Chicago, if not in America—and, in this capacity, helped to solve the sensational Dr. Cronin murder of 1889, an event heralded as “the crime of the century.”

When the Times was sold a few months later, its 22-year-old, worldly, cigar-smoking city editor lost his job. A few days later he was on the staff of the Chicago Tribune.

In 1892 he joined the staff of the Chicago Evening Post, as editor of its editorial page. 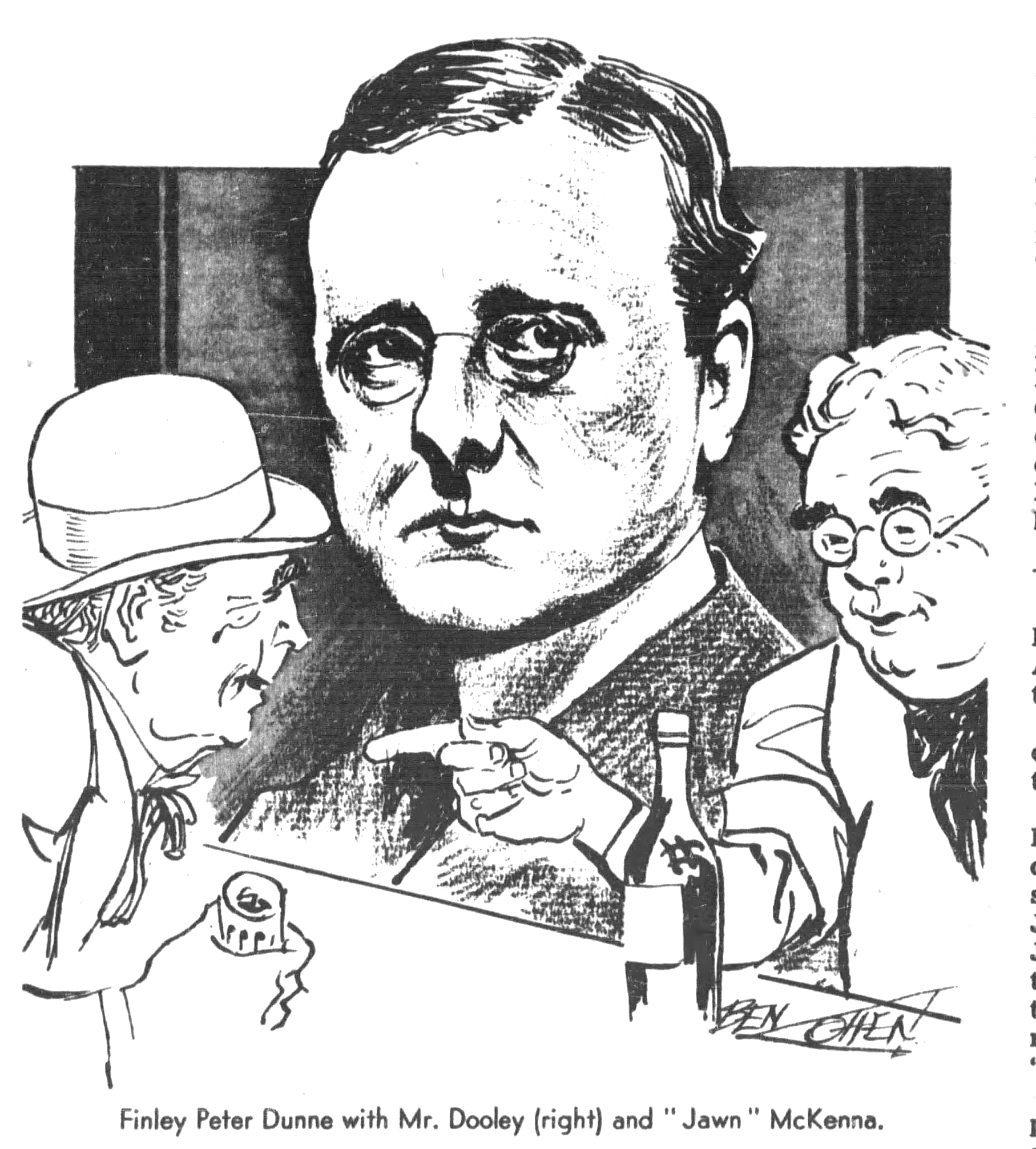 It was in this position that Finley Peter Dunne, on the fateful December day in 1892, dropped into McGarry’s saloon on Dearborn street and heard Jim McGarry orate on the subject of Jay Gould. In the Irish dialect piece that Dunne wrote the next day, however, the saloonkeeper of the article was not named “Mr. Dooley.” He appeared as “Colonel McNeery.”

For some nine months afterward, a period which included the exciting and glamorous World’s Columbian Exposition of 1893, the funny “McNeery” essays appeared each week on the editorial page of the Post. Altho the Irish saloonkeeper of these amusing pieces was named “McNeery” (and sometimes “McNeary”), almost everybody in downtown Chicago recognized him as a projection of the unique personality of Jim McGarry of Dearborn street.

If McGarry was given a fictitious name in these early Dunne writings, this was not the case with another important character of the writings—McNeery’s listener. From the very beginning of the series, this listener, this one-man audience of the great taproom proprietor, was John J. McKenna (not to be confused with his famed contemporary, Michael “Hinky Dink” Kenna), and it is under this name that he appears in the McNeery pieces.

A popular minor politician of the day whose home was on Archer avenue, “Jawn” McKenna is said to have enjoyed baiting Jim McGaerry, getting the saloonist to “open up.” When Dunne later changed the name of McNeery to “Mr. Dooley” and moved the Dooley thirst emporium to Archer avenue, McKenna thereafter became Mr. Dooley’s celebrated listener, “Mr. Hennessy.”

Why did Dunne make these changes? And why did he move Martin Dooley’s establishment from downtown Dearborn street out to Irish-populated Archer avenue? In answer to the first question we must go back to Jim McGarry. So widely did he become known as the prototype of the humorous McNeery, as the sayer of many witty remarks he never uttered, that McGarry finally became very angry about it; got his Irish up. He decided to do something.

No ordinary saloonkeeper; a likeable, intelligent, dignified host who always wore a neat white vest and whose comments on things, altho a few, were usually witty, maintained a place of high standing. Located on the east side of Dearborn street about 100 feet north of Madison, McGarry’s was much frequented by public officials, judges, lawyers, actors, and newspaper men.

Of all of McGarry’s customers, few were more influential than was the banker-owner of Dunne’s newspaper, John R. Walsh. And so it was with his friend Walsh that Jim McGarry brought up the matter of the McNeery articles.

After McGarry visited Walshe, the name of McNeery was changed to “Martin Dooley,” and thus a new name was added to American folklore. And not only that, but Dunne obliged his friend McGarry further by changing the location of the Dooley saloon to “Archey road” (as Archer avenue was then familiarly called). Thereafter Mr. Dooley of Archey road grew steadily in popularity. His witty sayings, his jibes at fakery, pretense, and mobbery in high places, soon were being quoted all over town.

When Dunne brought Mr. Dooley to the Chicago Journal in 1897, a wider audience than before greeted the barkeeper-philosopher of Archey road. And then came the Spanish-American war of 1896. Commenting weekly on the conflict, Mt. Dooley became a national sensation. By the turn of the century Mr. Dooley was firmly attached in the hearts of his countrymen.

it was not until then, also, that the identity of the writer of the Dooley pieces became known to the American public. Until then, the original McNeery articles, and the Dooley essays that followed, were never signed by Finley Peter Dunne. They merely appeared as anonymous and sprightly contributions to the otherwise dull editorial page of the one time Chicago Evening Post—contributions for which Finley Peter Dunne received $10 extra, no small sum in those days.

James McGarry, known the city and land over as “Old Jim McGarry,” probably one of the oldest saloon-keepers in Chicago, and a man with as quaint and unique a personality as ever attached itself to a tavern-keeper, will walk out of his famous hostelry on March 1 next, a victim to that modern iconoclast—Chicago hustle.

In the passing of Jim McGarry a notable character is lost to Chicago life. The old gentleman has been ailing some of late, and he has not been able to give his business that attention which rife competition on all sides demands. The death of Pat Casey, too, was a blow to McGarry. On March 1 John Specht and Al Kuhns will take possession of the place, the lease having been transferred through Chapin & Gore by Dibblee & Manierre to Specht & Kuhns.

McGarry has been the owner of the place he is about tyo vacate for nineteen years, buying out “Chesterfield Joe” Mackin after the latter’s conviction for perjury. McGarry first entered the s aloon business in Chicago about ’68, when he opened a place at No. 121 Clark street. Here he remained until the big fire, when he opened the basement at the northeast corner of Madison and Clark streets. He remained there three years. He was then “staked” to a saloon on Clark street by Mike McDonald.1

Literature is fraught with many a good story on Jim McGarry, but probably the best of the lot was printed in the ’80s. It was a bitter cold morning, and Casey was on watch. McGarry was sitting behind a screen at the end of the bar ereading a morning paper. Two Celts entered the basement and, pressing to the bar, called for whisky. Casey placed the bottle and the glasses on the bar, and the pair filled up. Just as they were about to toast each other, Casey noticed the seedy appearance of the twain, and exclaimed:

“We’re friends o’ McGarry,” returned the spokesman; “just tell him that Brennan and Cotten got two drinks” and down they gulped the liquor.

“Jist wait a minit, min,” put in Casey; “Mr. Mac is here. I’ll ask him,” and turning to the screened McGarry, Casey asked “Is Brennan an’ Cotten good fur two drinks?”
“Did they have ’em?” asked McGarry, without looking up.

“They have,” answered Casey.

“They is,” replied McGarry.

Mr. Dunne’s essays have been collected into the following books: 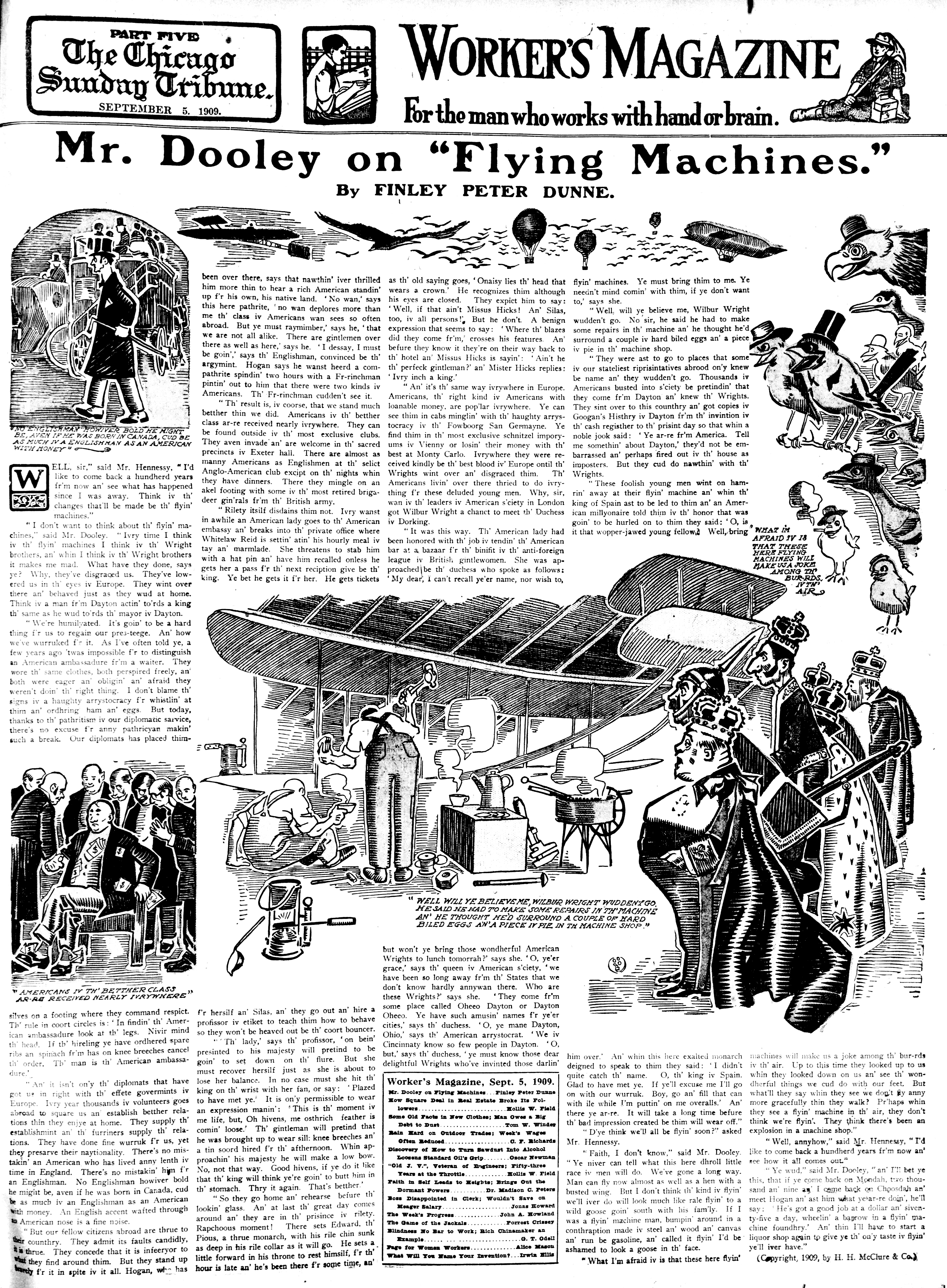