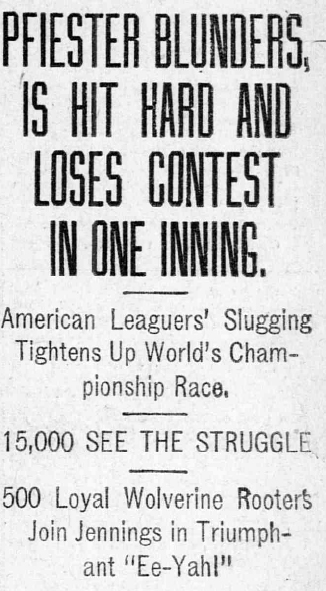 WOUNDED seemingly to death and driven to bay, the Tiger turned upon the Bear yesterday— and for the first time In two years’ fighting the Cubs felt the Tigers’ fangs.

One bad bit of judgment by Pfiester turned the whole tide of battle— and Detroit won the third game of the world’s championship series by a score of 8 to 3.

Away in the lead, the Tigers broke wretchedly under the Cub attack in the fourth inning— and it looked then as if Detroit was going to remain a joke team— and the helpless victims of the champions. Then, when it looked easy for Chicago,and as if the Cubs would sweep the series and win four straights, Pfiester wabbled. A base on balls, a little wildness, and then anxiety lest he could not get the ball over, and the trouble brewed. He was so anxious that he almost forced a hit upon Mclntyre, aud when O’Leary bunted Pfiester made the blunder that gave Detroit the game.

Pfiester’s Blunder Fills Bases.
Tinker and Evers were trying to hold Mullin close to second base ao that if O’Leary bunted, a quick throw to third would force Mullin— and perhaps save the day. The play was made exactly as planned, but O’Leary bunted toward first and slow, and when Pfiester reached the ball Mullin was so close to third that a throw there was hopeless— yet Pflester was obsessed by the idea that the throw was to go to third and there he threw—and the bases were filled with no one out.

And the crowd, which had rooted, and cheered, and hoped that the Tigers would win, suddenly regretted it— when danger came— and began rooting and howling for Pfiester to stop him.

Over In the boxes by the Detroit bench the loyal Tiger rooters, grouped in the field boxes next to the Tigers’ lair, suddenly broke loose with their first out burst since the series commenced. Above them a hundred yellow and black flags were flaunted— and, standing in their seats, with the banner of the Michiganders waving above them the fans of the City of the Straits hurled defiance at the Windy City.

Suddenly the partisanship of Chicago asserted itself and from all around the great inclosure the crowd arose and screamed orders, and encouragement to Pfiester and the Cubs, begging them to hold the Tigers. 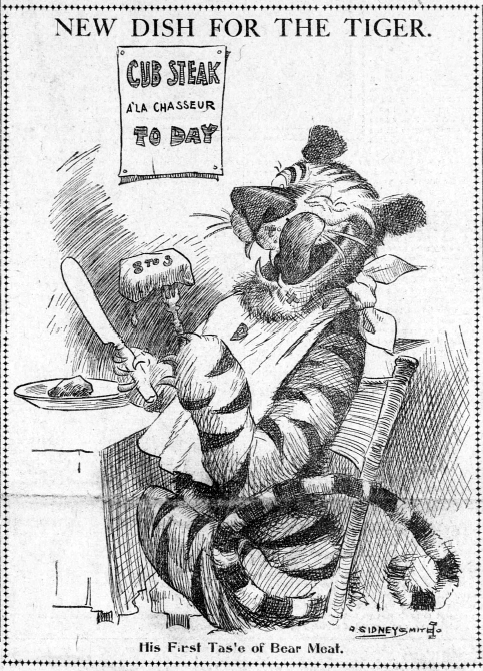 Tigers Raise Triumphant Ee-Yah.
Up and down the line Jeunings raced and raved, and the “Ee-yah” yell of victory of the Tigers arose for the tirst time in history on National League grounds.

What happeued after the fatal blunder of Pfiester was heart-breaking to the champions. With the Cub infield drawn close, the Tigers broke rough the wonderful defenses of the world’s champions. Hitting with wonderful luck, running wildly, making everything safe, the Tigers ran up a total of five runs before they stopped, and made the victory certain by hammering home two more.

Tempted by warmer weather, and the knowledge that good seats could be had, Chicago poured out a big congregation. They knew from the fights of the previous two days that Detroit was not whipped and the wonderful struggle between Overali and Donovan aroused from baseball spirit throughout the city. Nearly 15,000 persons, forming a crowd almost as large as that which witnessed Sunday’s struggle, swarmed to the park. And they thought it was the last chance of the season to see the champions in action. There were thousands who cheered tbe Tigers and hoped they would win, merely because it would give them another chance, perhaps, to see a game in Chicago.

No Rush for Seats
There was uoue of the massing or waiting that marked Sunday’s game. The crowd had secured tickets— and the real rush to tne park did not atari until after 1 o’clock, but the boxes and the upper grand stand tier were crowded when O’Day called time.

And it was a beautiful scene. The number of womeu in the stands aud boxes was large in proportion to the crowd— and the upper sections of the stands looked like a deli opening along State street.

It was a Chicago crowd except over near the Tiger bench, where 500 Detroit rooters, covered with yellow and black badges, and carrying the Tiger flag of Detroit— turned loose the “Ee-Yah” steadily and persistently.

To the ears of the experts that “Ee-yah’ which Jennings turned loose, sounded like the whistle of a small boy passing graveyard.

And what ensued was awful.

The game, while filled with exciting situations, really was about as bad an exhibition of bush league baseball as ever seen in a major league. It was a wild, weird exhibition—and really Detroit looked worse from an expert viewpoint, in victory than it did in either of the two defeats.

The game was badly pitched on both sides, and badly fielded, especially by the Tigers. Errors of judgment, blunders and failures to take advantage of opportunities abounded— but what mattered that? 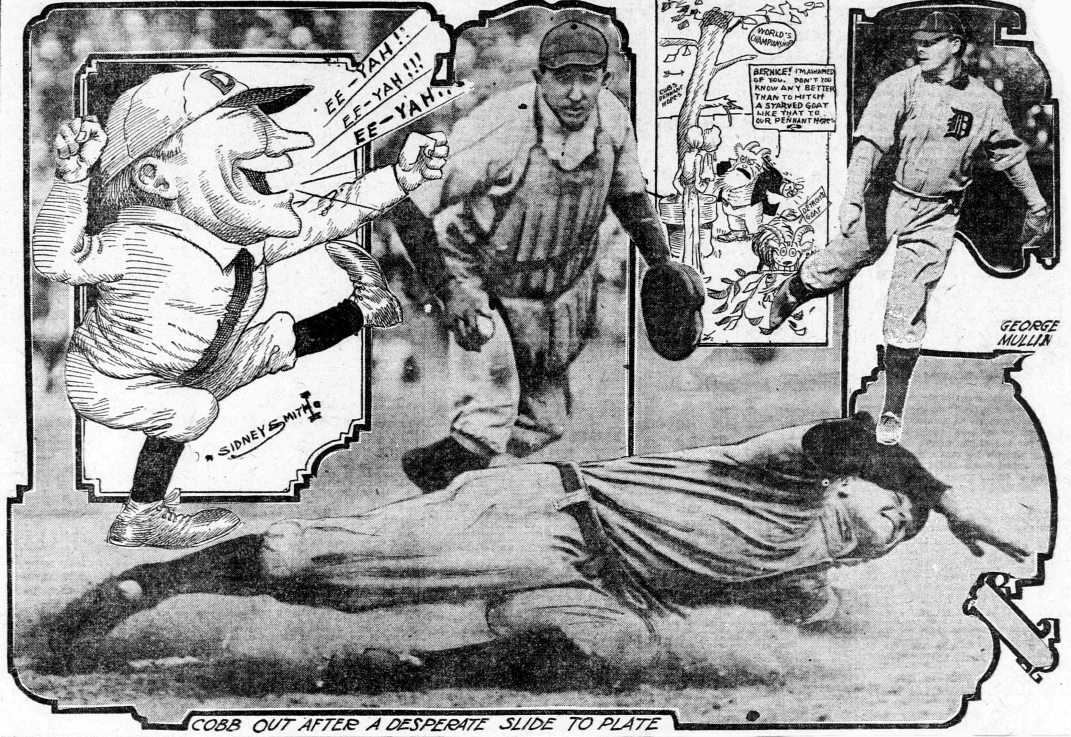 Cobb at Last Has His Day.
It was Tyrus Cobb day— and for the first time in either world’s championship series between Detroit and Chicago Cobb had his chance to shine. It was he who, with a lucky hit. drove home Detroit’s first run and four times he smashed out hits. Besides, he ran wild on the bases, and gave one of the most astonishing exhibitions of base running ever seen in a big league. College teams, amateurs and sometimes both leaguers run that way, but not long if the manager knows the game. He stole third once with two out— just to show he could and he was starting to steal hone when Kling put an end to his adventurous career on the bases by making him look foolish in an attempted double steal.

Yet, because Cobb did it, Detroit went wild.

Pfiester pitched fair ball during the early stages— but it was apparent from the start that he was not in top form. He has had trouble in taming his curve ball ever since Bonesetter Reese threw his arm back into place— and yesterday he thought it would behave. But striving hard to get perfect control Pfiester lost that free, easy swinging motion that is his main strength, and when finally he fell it was because he could not get the ball where he wanted it to go.

Opposing Pfiester was George Mullin— veteran and alleged has-been, who with perfect or even decent support, would have shutout the champions without a run. And that is to laugh.

How Mullin won that game, is one of the never to be explained mysteries of baseball. With Donovan beaten the Cubs looked upon Mullin as easy. They knew he had been the easy mark for all comers in the American League. They knew his spitball amounts to nothing— and that his speed looks like a Wabasb freight compared to the Twentieth Century limited alongside of Donovan’s fast one. So they did not fear— and fearing not they fell.

The statistics on the fourth game between the Cuts and Tigers for the baseball championship of the world show that the Tigers won by slugging the ball. The Tigers were outfieided, but their terrific hitting won them the victory. Following is the full score of the game, together with the batting and fielding averages for the game and the series to date: 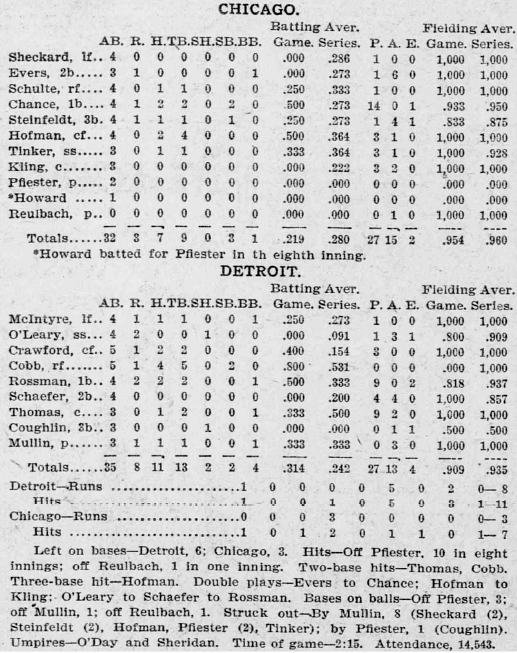 Nine Champions Strike Out.
And that kind of pitching beat the champions— and beat them soundly. It beat them so well that nine of them struck out swinging at his barrel-hoop curves.

Detroit got away with the lead. A failure by Stelnfeldt to recover quickly after stopping a hard line drive from O’Leary, followed by a nasty throw that pulled Chance a few inches off the base, gave the opening— and right there the Tiger hopes arose, and the loyal bunch of Michlanders arose and started their chorus of victory.

It certainly was the Tigers’ lucky day— for Crawford rolled a ball just a foot or two inside the plate— and. although he was out, that accident put O’Leary within reaching distance and he raced home when Cobb made a hit, the first of the quartette the Georgia wonder contributed toward the Tigers’ victory. That hit was an odd one. Pfiester completely fouled Cobb with a low curve ball. He started to swing at it, and seeing himself fooled, followed the ball with his bat and just poked it so that it bounded out over Tinker’s head for a single.

It was that kind of luck that pursued Pflester all the way. The ill luck that has pursued Unlucky Jack since early Spring fell upon him again and the hoodoo that broke his heart in midseason came back.

Still in the fourth luck came to him. Up to that time all had been Tigerish, and their lead of one run looked larger and larger until that fourth, when the joke infield, patched an repaired in hope of stopping the leaks, crumbled again. The Cubs. given an opening, started hitting running and forcing the pace, and the Tigers broke. Three errors, followed by screaming triple by Hofman, gave the Cubs the lead.

Over in the camp of the Tiger all was silence and gloom. It looked as if Detroit never was to win a game. The stripes on the Tiger faded and flags drooped and the “Ey-yahs” dropped into a purr of despair

And then as suddenly Detroit stock boomed.

Thai was In the sixth. A base on balls started it all— a base awarded to Mullin. It was evident Pfiester was having trouble controlling the ball, and yet after Mullin was passed he laid over two strikes on Mclntyre, who neither bunted nor hit; and after that Foster pitched himself into trouble and Mclntyre bit.

All Tiger Hits Go Safe.
The bunt that lost the game followed—and after that any thing that a Tiger batter hit went safe through, under or past the close drawn infield. Not a run probably could have scored if Chance could have played back for Crawford— as a double play would have resulted. Nor could Cobb’s hit hare gone safe, with the infield back, nor could Rossman’s bounder got past Evers— but with the infield drawn in they all went safe— and the game was lost.

What happened after the disastrous’ round amounts to noihing, as the Cubs never could get a start at Mullin’s queer pitching—they fell, yielding for the first time in two years a game to their American League rivals.