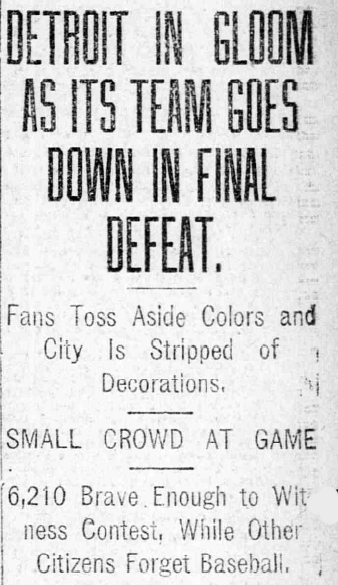 By winning to-day Chance’s team accomplished a feat never before performed in baseball, and climaxed their wonderful fight to retain their title by a grandly won victory.

Detroit, drivento bay, desperate and fighting for the remnants of honor, sent “Wild Bill” Donovan back to the slab in the faint hope that he would stop the champions, but there was not a chance. Donovan’s arm had weakened under the strain of his brilliant attempt to hold the Cubs on Sunday, and to-day he was forced to resort to trickery and slow curves. Twice at opportune times the Cubs landed on him and manufactured two runs—enough to win with one to spare.

Chance Picks Big Overall.
Chance, determined to finish the series to-day and clinch the championship beyond peradventure of a reasonable doubt, chose “BigJeff” Overall to pitch. All during the morning he hesitated between Overall and Reulbach, but Reulbach’s arm was stiff from the effects of pitching ln the rain on the opening day of the series— and Chance decided on Overall. Jennings chose Donavan. It was a despairing chance for he knew that Donovan’s terrific speed was lost, and yet he hoped that Bill’s experience and trickery would carry him through.

Donovan pitched one of the cleverest, headiest games of the series, though the terrific speed with which he dazzled the Cubs during the early stages of Sunday’s game, was entirely missing. He used a slow underhand side arm ball, a curve more or less fast, and occasionally a flash of speed, and against him Overall cut loose the grandest array of curves yet shown in the series. His fast drop ball was breaking like a flash and the batters who swung at it missed it a foot or more. His speed was wonderful and the break on fast ball made it unhittable. He pitched almost a faultless game of ball, except at times when he hurried too much and grew wild. But after he had issued passes he slowed up and stopped the Tigers dead. 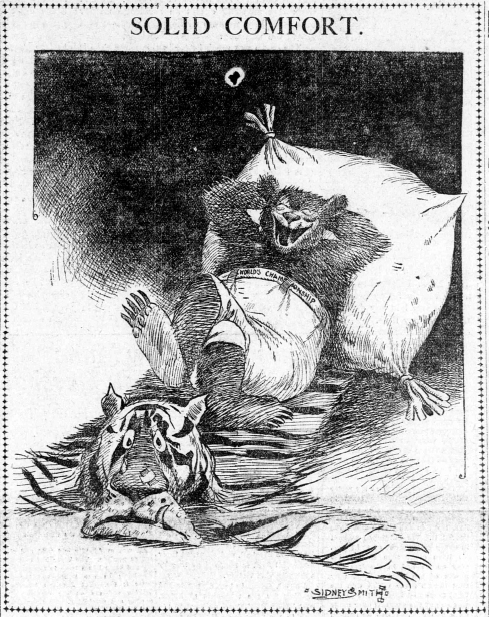 Battle a Mechanical One.
There was little of the grand brain work and generalship of the previous day in the battle. This time lt was mechanical skill and the Cubs showed thnt they are the best ball club ln the world by their wonderful execntlon. Only once did either team blunder in performing fielding feats, and that was because Overall was too good.

In the first Inning he struck out a batter, and the curve that fooled him Into swing-1 ing for the third time wns so fast and broke so quickly and so low that it escaped Kling entirely and went to the stands, filling the bases, with two men out. That was the only chance the Tigers had to win, and Overall killed that opportunity by whipping three fast curves across the plate and striking out the next batter, leaving three Tigers standing still on the bases.

In every crisis of the game, whenever the Tigers even threatened to score, Overall began breaking his fast curves across, and the result was that they were helpless. He had an ace in the hole all the time, and . he used lt whenever he needed lt. 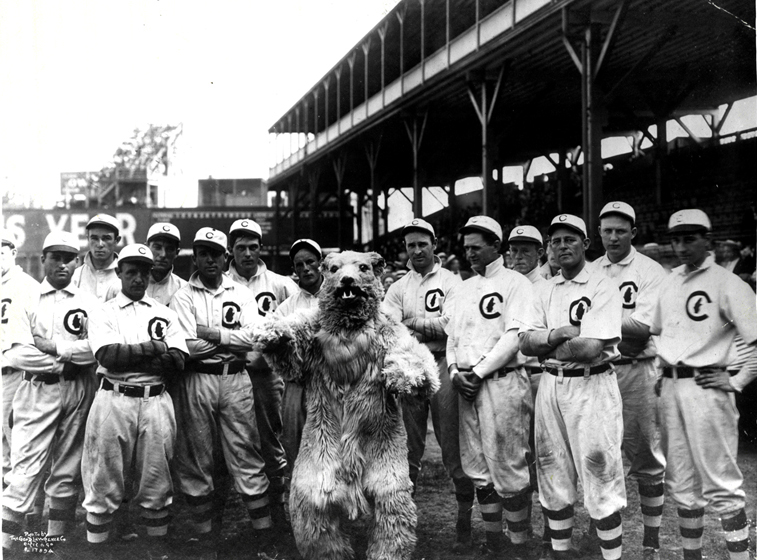 No Joy in Detroit.
To-night Detroit is in mourning. Not a house has been burned down, and not a bonfire lighted. The claws of the Tiger have been clipped for good and all, and Ursa Minor shines brightly over the city.

A perfect baseball day—one of the most glorious of Indian Summer— was vouchsafed the teams for the final struggle of the series. The players took little account of the attendance, but almost 7.000 fans were out to witness the final battle. Yesterday’s struggle convinced the Mlchiganders that Chance has the grandest team in the world, and yet the throng poured out to attend the obsequies and see the Cub give the coup de grace to the wounded and desperate Tiger.

All was as friendly and mild and pleasant as possible. The Tiger had quit fighting
and came like a lamb to the slaughter. He knew he was licked— and the Cubs knew it too. Yet Jennings insisted on fighting and out on the coaching lines, pawing and scratching. He screamed out the “Ee-Yah” war cry of the Tigers and tore up grass and raged and raved, leading the forlorn hope.

Crowd Cheers Cubs.
The crowd was docile, and appreciative. It came expecting defeat and was not disappointed. At times, when Overall hurried and gave the Tigers a chance to drive home runs with hits, the crowd waxed noisy, but mainly it rooted for the Cubs, and applauded ihe grand work of the champions.

Nor was it an easy game to win. Detroit had many chances and even better chances to score than did the Cubs. In the first and in the fifth inning o safe drive, or an error would have put them on even terms, or perhaps put them ahead. Donovan did not have much, but with every ounce of force In his being, he was trying to keep the Cubs from running away with the game.

And through it all he managed to hold them within striking distance, and gave them a chance to win. It was not the fault of Donovan that the Tigers lost. Had they been able to score off Overall and break the grand defense of the Cubs he would have given them victory. Pitching brainy, skillful and clever ball all the way, he managed to keep down the score of the champions in spite of their hitting, to keep their hits scattered and to keep Detroit hopeful until the last man went out. He could not stop Chance and Evers, and the slashing hits of these two forced runs across the plate and Chicago won. 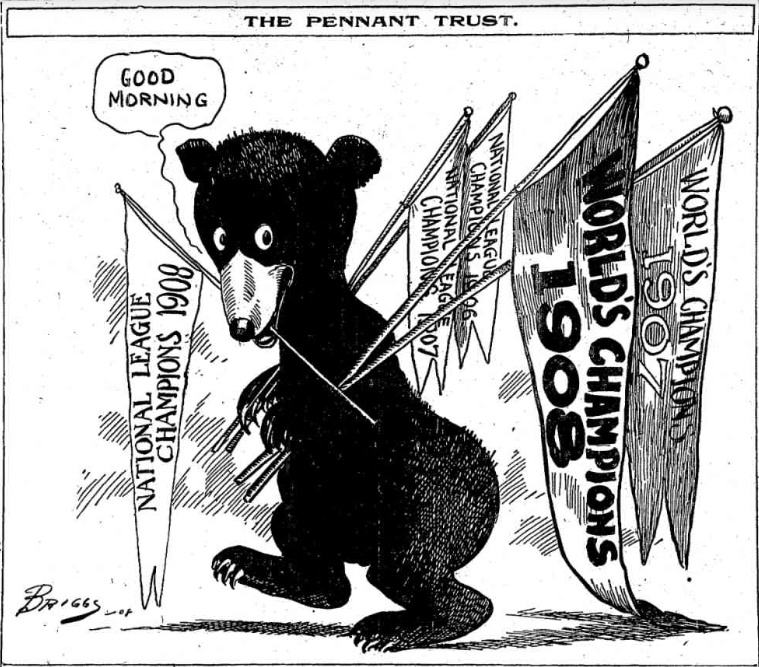 Precise Baseball Wins.
The fielding of the champions was clean, fast and machine-like. Chance had his old pennant-winning machine working at top speed again and it was irresistible. Nothing went through, nothing escaped and the game put up by the Cubs was irresistible. Twice Sheckard, by wonderful exhibitions of playing position for batters, “Just happened” to be there when hard drives were slammed out into his field. The infield was working like a clock with never a halt or a skip. There was nothing sensational, nothing even brilliant about the work of the team— only clean, fast, precise baseball.

Chicago went away in the lead and in the flrst Inning lt looked as if the Cubs would run away with the game. Evers, Chance and Schulte singled in succession and one run came home. Armed with the lead of one, the Cubs rolled along in clean fashion. Donovan was holding them in check and stopping the scoring, but in the fifth, with two men on bases. Evers turned on a fast pitch and smashed a line fly to left center. The hit was perfectly placed and out of reach of both fielders who were playing him. oue near the foul line and one over right, and the ball fell safe for a two bagger, sending Kling across the plate with the second run of the game. 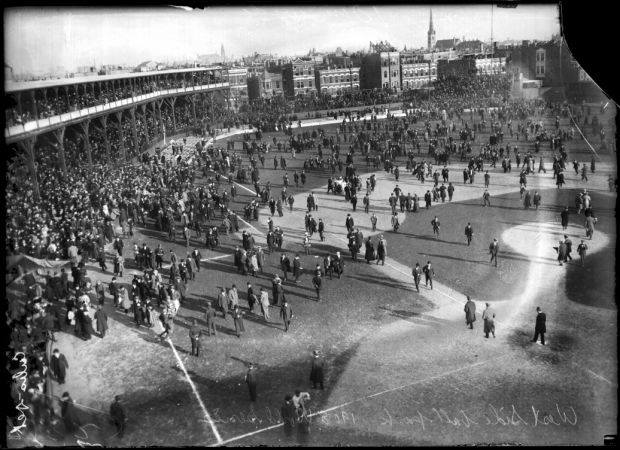 Schmidt Cuts Down Runners.
After they got that lead the Cubs boldly attempted to take liberties with tbe Tigers to increase their lead, but it did not work. Schmidt and Schaefer cut them down on the bases and their attempts to increase their score by bold base-running yielded them nothing.

There was only one time during the entire battle that the Tigers grew dangerous and that was in the last half of the fifth—and then the luck of the game turned their way and came near allowing the Mlchiganders to even up the count.

The start was bad, for Conghlin hit a slow, easy bounder down toward third Steinfeldt had just set himself to grab the ball and throw the runner out when it struck a lump of limestone a quarter of an inch in diameter, took a quick side bound, and almost got past third base, Steinfeldt jumping sideways and blocking the ball with one hand. That minute remnant of he paleozoic age came near putting the Tigers on even terms, for later McIntyre, slashing wildly at a fast curve ball, hit a screaming bounder straight over first base hance hurled himself wildly at the ball, but couldn’t reach it, and there were runners on second and third and only one out, with the revivified hopes of Detroit voicing themselves in vociferous outbursts of noise.

Crawford Fans in Pinch.
Rut the noise soon was still, for when O’Leary lofted a short fly to center Hofman drove the ball to Kling so fast that Coughlin was forced to turn nnd flee back to third, diving to the base to keep Kling from catching him off. Aud the next man, the mighty Crawford, took three healthy wings at Overall’s unhittable shoots and closed the incident.

Toward the end Overall had the Tigers tamed and eating out of his hand, and finally, when Kllng caught a cheap foul fly Chance tied the fourth knot in the Tiger’s tail and made good his promise to bring back to Chicago another world’s championship.

The complete box score of yesterday’s game, the last of the series beticeen the Cubs and Tigers, tells all the whys and wherefores of the Detroit club’s downfall. Overall’s control was not perfect but his effectiveness was so great that the four passes heissued were not at all costly. The Tigers put in an errorless game, but their rapid fielding availed nothijig, as they could not hit many runs. Chance and Evers were the big hitters of the day, Johnny having it on the manager
with two singles and a two-bagger to three singles for the champions’ boss. Melntyre, Crawford and Coughlin were the Tigers who divided Overall’s stingy allotment of hits. Following is the complete score: 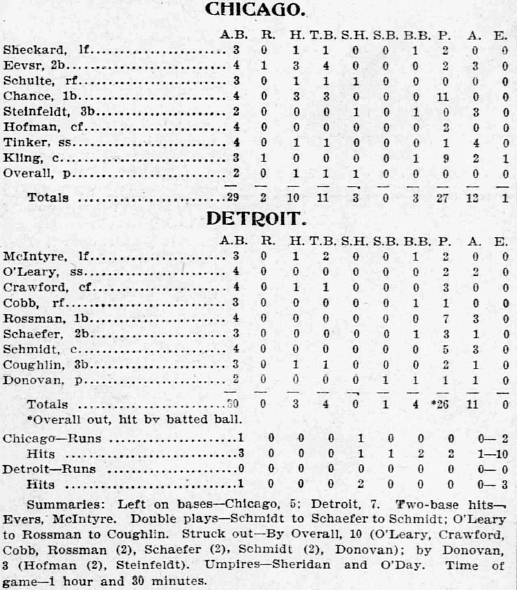 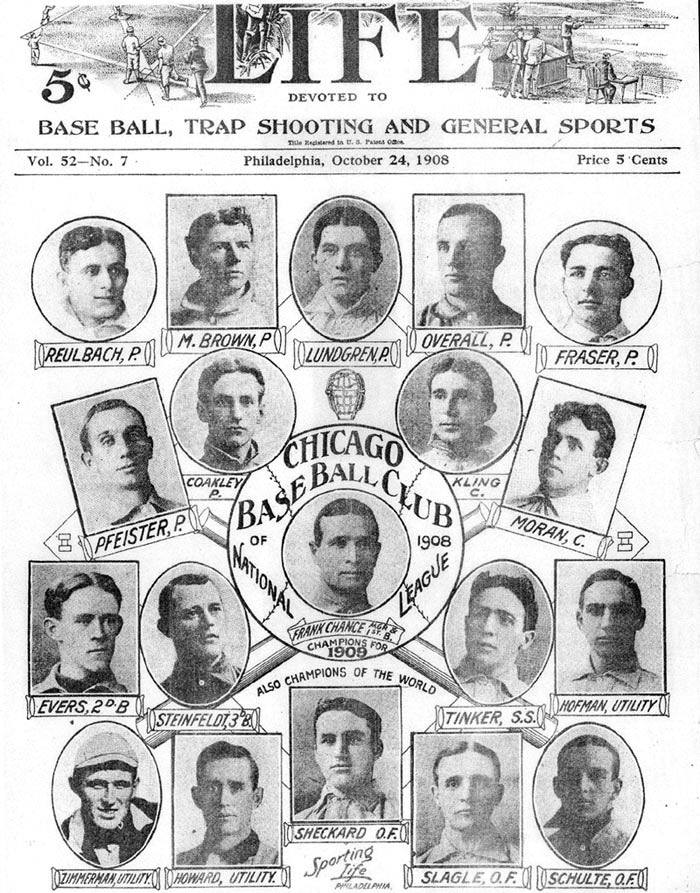 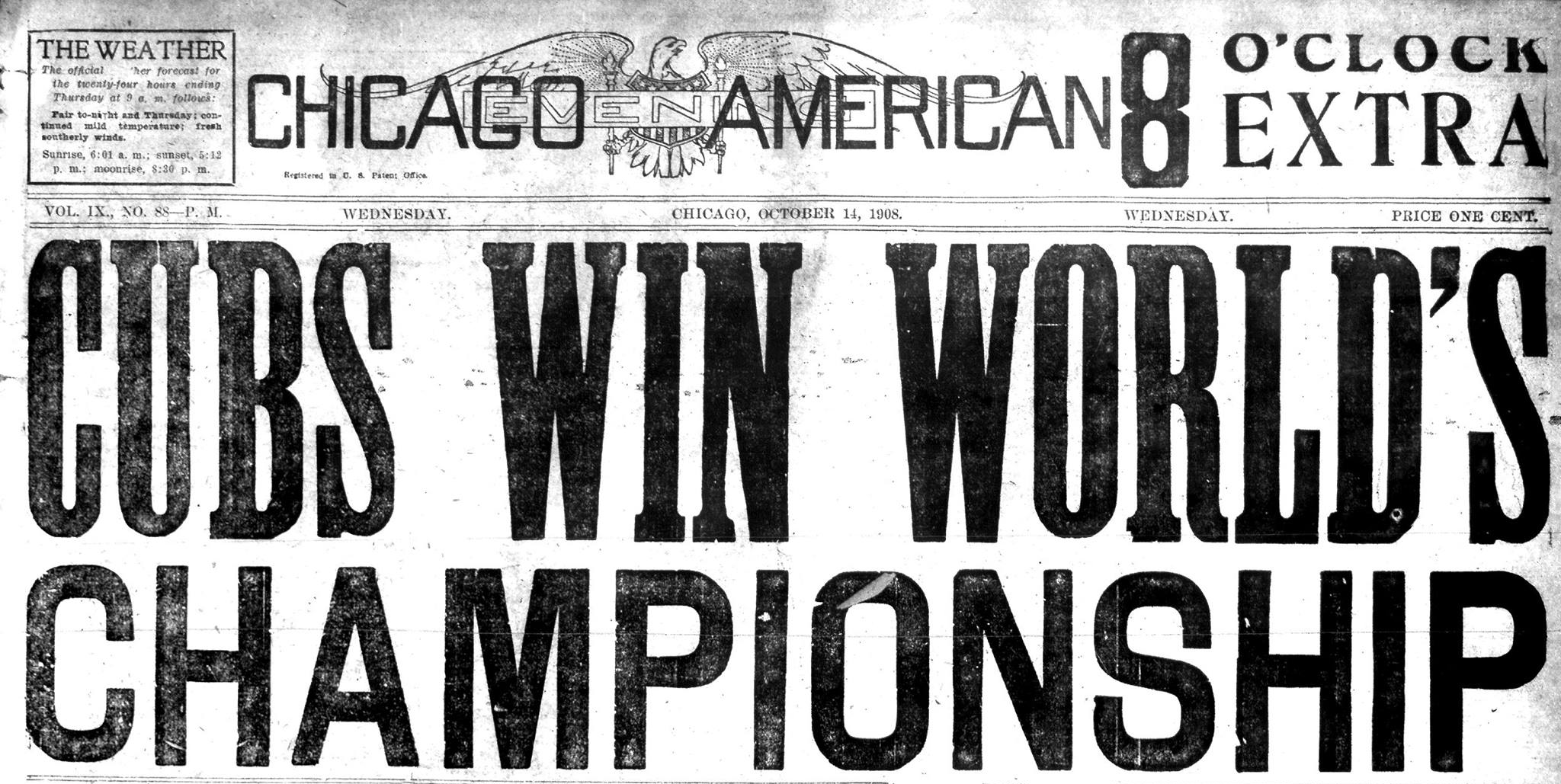