The New York Giants needed three wins over the Boston Doves in the final three games of the 1908 season in order to clinch a tie for first place. They won those games by scores of 8-1, 4-1 and 7-2. However they lost to the Cubs in a one-game play-off. 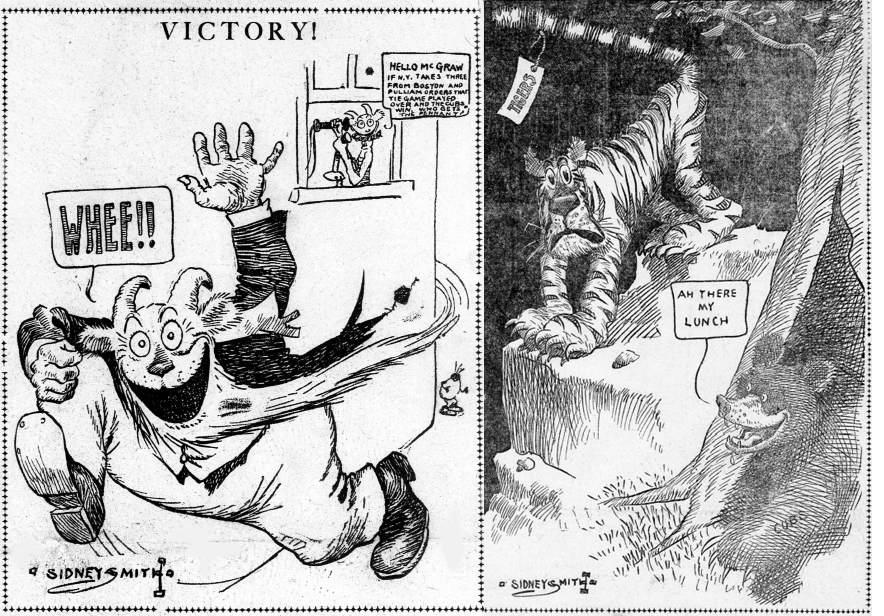 Chicagos Cubs, the greatest ball club the world has ever known, are champions of the National League for the third time. Winning over New York to-day by a score of 4 to 2, in the face of heavy handicaps, the greatest, wildest mob that ever saw a ball game, the Cubs won their pennant tor the second time ln five days, and tonight are rusbing westward to open the series for the world championship at Detroit on Saturday. 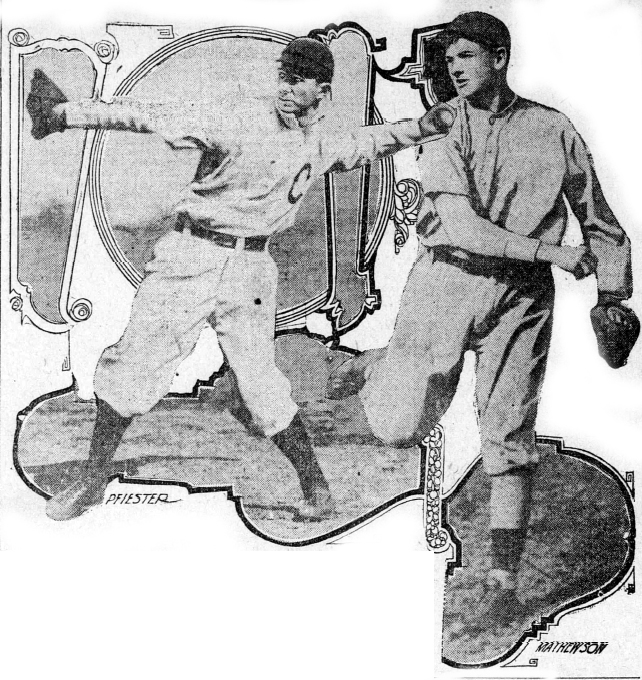 To-day’s desperate struggle, climax of the wonderful race of Cubs, ended in one of the most graceful and outrageous riots seen on a ball field. The crowd worked up to a pitch of frenzy by the efforts of McGraw and Brush to take the pennant in spite of everything, attacked the victorious Chicago players as they were racing off the field and gave them a terrible beating. That they escaped with their lives and without serious injury Is little short of marvelous.

As it was, Chance was badly beaten, and a blow in the neck broke a cartilage in his windpipe so that to-night he can scarcely speak. Pfiester was knocked down and beaten and Brown was roughly handled, and Evers, protected by a guard of police, fought his way to the clubhouse. Every man on the team was bruised, struck and dragged around by the maddened crowd, wild over the downfall of the Giants and the mighty Mathewson.

All that the Cubs ever endured on the Polo Grounds, which is notoriously unfair and vicious, was nothing to what happened to-day. From the time the Chicago club first appeared on the field they were forced to submit to every insult. and indignity known to the mob. And the Giants strove to incite riot. Once McGinnity, trying to prevent the Chicago club from practicing before the game, attacked Chance with a bat, aud throughout the entire game they strove to incite trouble and work the crowd up to a pitch in which they would attack the Chicago club.

The game not only was the climax of the desperate campaign, but the climax of the efforts of McGraw to win by fair means or foul, and that McGraw and Brush are not to-night charged with being accessories to the murder of Chance or soma of his players is not their fault. 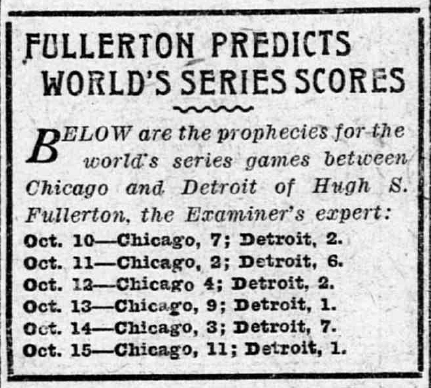 The Cubs escaped luckily from the mob that pursued them. Yet the game, the play-off of that famous tie of September 23, will go down in baseball history as the most spectacular ever played. And in all fairness, with tide bitterness of the past, all buried, the suspicious season of the National league ended yet more auspiciously, without charging actual crookedness, yet if Umpires Johnstone and Klem were not instructed to give the game to New York, then they were in terror of the mob.

The umpires gave New York one run, they took one run, and a chance for more from Chicago. And every close decision and every advantage that goes with balls and strikes went to tha Giants. Besides that Klem drove one Chicago player out of the game, when that player had not spoken to him, nor been within seventy feet of him after a raw decision and in that same inning he permitted Devlin to heap all sorts of abuse upon him and never murmured.

HENRY T. McBRIBE, a, fireman; killed by falling from elevated structure, from which he was viewing the game. 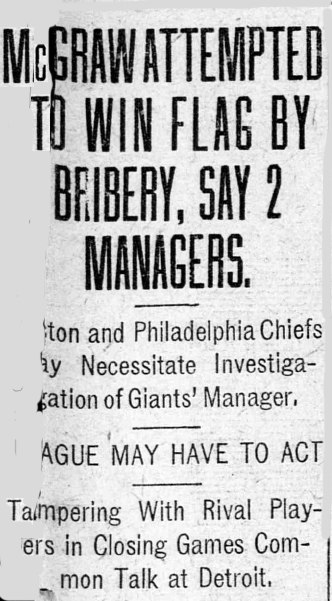 DETROIT, Mich., Oct. 9.— The biggest and worst scandal that the National League ever faced has resulted from the desperate pennant race that ended with the victory of Chicago over New York yesterday.

John J. MGraw, manager of the New York team,stands charged with attempting to drag the disreputable methods of the racetrack into baseball and is openly accused by two managers of attempts to influence ball players to throw games to the Giants.

Manager Joe Kelley of the Boston club, a personal friend and old associate of McGraw, charges that Bill Dahlen, his shortstop, and George Browne, his outfielder, both ex-members of the New York team, “laid down” to the Giants in the recent series in which New York won three straight games.

William Murray, manager of the Philadelphia team, backed by the newspaper of that city and by the statements the men involved, charges that McGraw attemptted to Influence two of his pitchers.

Bribery Attempt Angers Managers.
During the wild excitement at the Polo Grounds yesterday, and both before and after the game, Kelley and Murray iterated their charges against the New York club. Both managers openly and wanted New York to win, and the alleged attempts to bribe their players, angered them beyond silence. McGraw who narrowly escaped punishment in connection with his horse racing gambling is accused of trying the same practice in baseball, and the result is that both Boston and Philadelphia papers are demanding that the National League order an investigation and purge Itself of the suspicion of crookedness.

The cases are simple. Kelley says Dahlen and Browne did not try to beat New York. Paul Shannon of Boston claims that the pair “laid down.”

From the Philadelphia club the charge comes that McGraw approached both McQuillan and Sparks. It ls not charged that he offered them direct bribes, but that he went to them, saying:

It won’t do you any good to win, and it might mean a lot to you to lose.

The pitchers, it ls said, reported the matter to Manager Murray, who. being one of the squarest fellows in baseball, urged his team to greater efforts against New York.

Think McQuillan Overanxious.
McQuillan already was under suspicion, and even before New York played there rumors, probably based ou previous charges againstt him. reached the Chicago club. Still none of the players believe that McQuillan lost to the Giants purposely. Rather thlnk that he might have been overs-anxious to beat them aud lost on that account.

One of the queer features of the scandal is that C. H. Ebbets, owner of the Brooklyn club, was one of those who especially wanted to have New York win the pennant. Before the Chicago club opened its series in Brooklyn Ebbets called a meeting of his team and threatened to put any player out of business who did not play his hardest to beat Chicago. And he held New York must win. As Dahlen, one of the men accused by Kelley,ls slated to manage the Brooklyn club next season and take the place of Patsy Donovan, the situation is somewhat complicated.

Those who know Dahlen are loath to believe would do anything such as he is charged with, but the Boston press insists on urging the charges. It is up to Dahlen and Browne to clear themselves of suspicion. In fact, it is up to the National league to purge itself of John T. Bush and John J. McGraw, or admit that New York {page torn}league and that “everything goes.”