DETROIT, Mich., Oct. 10—Chicago won the opening struggle for the world’s championship by terrific hitting that covered up all their flukes, overcame the luck of Detroit and gave them the verdict by a score of 10 to 6. The game was won by clean, slashing hitting and by the dashing work of the Cubs on the bases and yet the result was not such as to make the Cubs overconfident. They know that Detroit has ateam that will come back and fight when down and out and that the Tigers are most dangerous when wounded.

In the game, despite the fact that it was played ln a steady downfall of cold, chilling rain, the Cubs showed that they have the class and by winning out after the luck and the wildness of their pitchers had seemingly given Detroit the victory they got a big advantage ln the world’s championship struggle.

The game to-day was played under desperate circumstances and with the clothing of the players soaked by the chill rain, with the field slippery and the ball wet, neither team could show at its best.

Accident Gives Tigers Start
It was an accident that came near depriving the Cubs of the game in the closing innings. Cobb at the start of the seventh drove a vicious bounder straight at Reulbach. The ball hit hla hands squarely, but with such force that it broke through.

For a moment Reulbach thought his pitching hand had beeu injured. It was numb from the blow and he lost his grip upon the ball. The result was that he began to lose his control, could not make the ball behave and came near tossing off the game before Chance got him out. At that he would have held it safe but for a lucky hit by Summers, who ls about the most helpless of batters.

Brown Relieves Reulbach.
Overall, who succeeded Reulbach, came on under extremely adverse circumstances and could not get control of the slippery, greasy ball at all. He might have escaped, but Chance withdrew him after he had passed one man in the eighth Inning and sent Brown out, and then the luck broke worse than ever.

The game was desperately fought, but Chicago showed it had the class in the field, in inside play and on the bases. The Cubs, led on by Tinker, gave a magnificent exhibition of running aud really clinched ihe victory by clever work on the bases. There was no comparison between the clubs in any department. The thing that most upset the Cubs was the wild, daring base running of Cobb. Twice In the face of heavy odds he took two bases on hits that only entitled him to one. aud each time he got away with it. once on a close decision at third, given hy Sheridan, and again he drew a wild throw to third that came near giving Detroit the verdict. 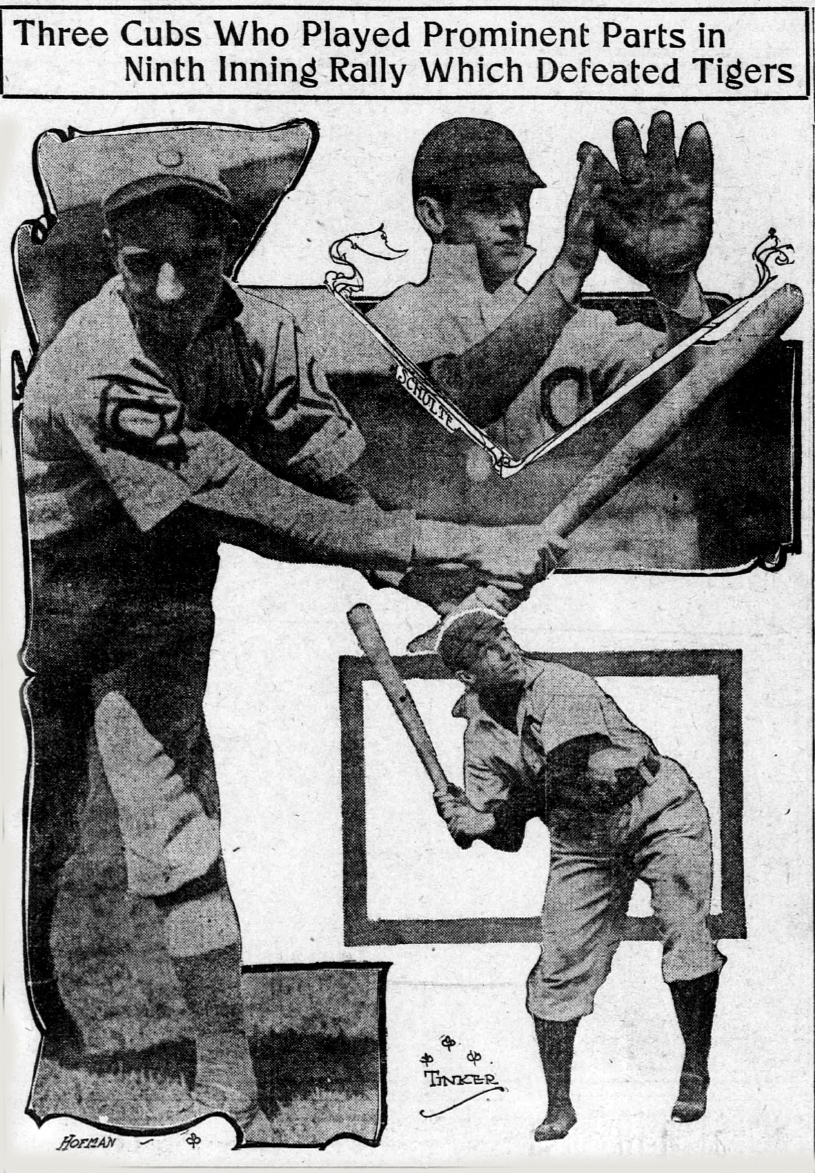 Prosperity Upsets Summers.
As they had expected, the Cubs fell upon Killian and drove him to the bench, but Summers, with a world of speed, had them stopped. As long as Detroit was losing and far behind Summers kept his nerve and pitched fair hall, but when tbe Tigers got ahead and victory seemed within their grasp Summers lost his heart or his head and in that ninth inning the Cubs gave one of the greatest exhibitions of offensive baseball ever seen in this town. They waited out Summers at the bat until they forced him to lay the ball down the groove and when he did, the way they hit it was simply shameful, and after they had evened up and gone abend Tinker bunted home a run by one of tbe cleverest ruses ever seta.

Tinker Hero of Game.
Tinker, indeed, was the hero of the game. His fielding simply was superb and twice during the time that Reulbach was going at his best Tinker cut off clean base hits and got his man at Brat each time because of the grand work of Chance in retrieving hurried desperate throws when the ball came to him each time on a bad awkward bound.

Just how much the weather conditions affected the playing of the game is hard to tell, but closely analyzed the chances are that the Cubs would have »on by a score of about 6 to 1 on a dry field.

Twice Schaefer. had chances to get his men and Tinker might have averted a lot of trouble if he had been able to move a little faster in that awful seventh inning when Cobb’s hit broke through Reulbach. On a dry field he would have thrown Cobb out easily, but under the circumstances he hardly could start for the ball. 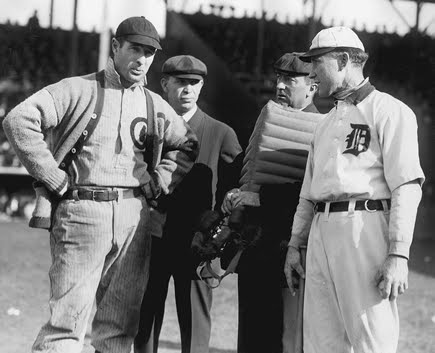 Tiger Sluggers Outguess Reulbach.
Detroit’s first run was the result of the batters outguessing Reulbach, and the two men whose hits manufactured the tally, made it by hitting the first ball he pitched to them.

After Chicago made its four runs in the third inning, it looked hopelesa for the Tigers and few expected them to come hack at all. But they did. They came back fighting, clawing and encouraged by the madness of the crowd fought the Cubs off their feet in the seventh and eighth after they had been outplayed. Nor did many expect the Cubs to revive after the blow their hopes revived In that eighth inning, when they broke and handed the lead over to Detroit.

Rut they came back filled with determination and pounded their way to a well earned victory with five screaming hits, a safe bunt and a double steal in succession.

Following is the detailed story of the first of the world’s championship games told in figures, with the team and individual batting and fielding averages: 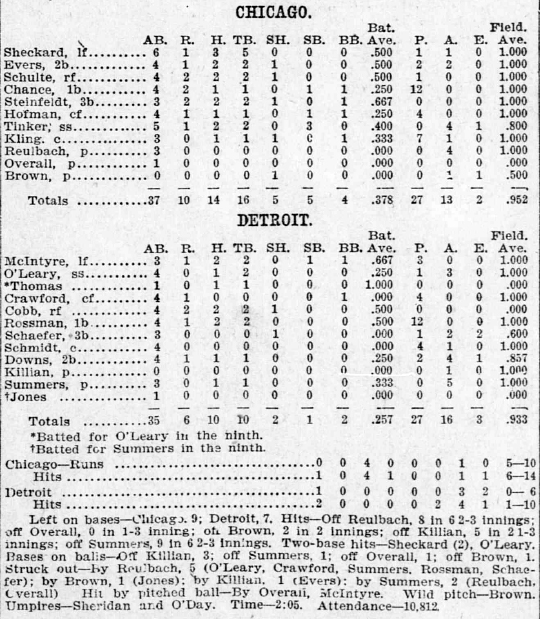