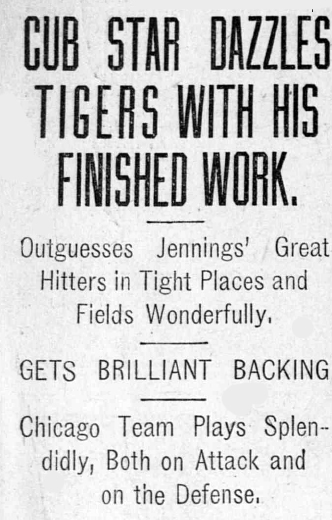 DETROIT, Mich., Oct. 13—Brown, premier pitcher of the world, in one of the grandest exhibitions of brain and skill ever seen, humbled Detroit to-day and tied the third knot in the tail of the Tiger. Pitching magnificently, but fielding even more wonderfully than he pitched. Brown shut out the Tigers, while by hard work the Cubs managed to force three runners around the circuit.

When Chicago comes to choose its colors, Brown should be the scheme, and upon the new colors should be emblazoned three fingers rampant upon a ball twistant, and under them the motto “They Cantibus Beatus.”

Brown, by his wonderful pitching, his nerve, his brain and skill, beat Detroit and won for the world’s champions the hardest, best and most fiercely fought game of the series. By winning he practically cinched for the Cubs their second world’s championship— and brought the Tiger low. Tonight, after the grand exhibition of baseball given by Brown and the champs, everyone in Detroit expects the Cubs to sweep the Tigers into the Biscard and close the series by tomorrow, so that they can bear back to Chicago their second world’s championship. But one more victory Is
needed.

Cubs Play Wonderfully.
The game waa wonderfully played by Chicago and in every department they showed the American League champions that there is something they must learn before they can hope to win from the record-breakers. They won in the face of desperate, determined aud tierce resistance— and overcame all kinds of difficulties before the shut-out and the victory was assured.

It was the last day that the players are fighting for the greatest who sporting world had in which htoonroerapof the their reward and everything that nature could do to help them she did. It was a perfect Autumn day, clear, bright and just warm enoughto tempt the Detroiters who already had started to hibernate for the Winter out to witness the struggle.

Encouraged by yesterday’s victory of the Tigers over the Cubs, the first thev have scored in two years, the enthusiasm of the Mlchiganders quickened again— and at noon the crowd began to pour towards Bennett Park. The field was perfect, the sun shining brightly— and when at 2 o’clock play started nearly 13,000 persons, the largest that Detroit ever turned out to a ball game, was massed around the small field.

It was perfect for baseball, and the champions took advantage of the conditions to give Detroit the most dazzling exhibition of ball-playing with hands, feet and brains that ever was seen here. The work of the Cubs simply was wonderful. Led on by Brown, and Kling catching superbly, they broke the Tigers at every turn, and when the luck of the game broke for Detroit Kling and Brown stopped them lead by a wonderful exhibition of brainy ball.

The plays that showed Detroit the class the Cubs and convinced even the wildest-eyed Tiger fan that Chicago has the better team almost all were crowded into one inning, and that the fourth.

Summers Wabbles in Third.
Summers, whose terrific speed and fast curve had been a stumbling block to the champions, wabbled in the third Inning Kith two out, and two slashing drives, following up a couple of gifts, had yielded two tallies and given Chicago the well earned lead. Brown was pitching, as only be can pitch, with all the nerve, all the brains and experience of his career concentrated upon winning the game and putting the Tigers out of the running. His famous hook curve was breaking comet-like around the plate and there was a jump on his fast ball that made it look like a camel humping itself, but the Tigers when wounded and hurt are most dangerous and suddenly, in the fourth, they turned upon Brown.

It was Charlie O’Leary. the game, fight- little Chicago lad. who started it. He came filled withdetermination, and instead of trying to hit the ball hard, just poked his bat against a low, fast outshoot, and the ball flashed over Tinker’s head into left field for a hit. Wahoo Sam Crawford, the most dangerous hitter in the American League, was next, and between him and Brown it was a duel of wits. Brown was trying to outguess the Nebraska barber, and Wahoo Sam. armed with his barber pole, trimmed down to the size of a bat, was trying to beat Brown at his own game.

Brown knew Crawford simply tears the oflf balls pitched high to him— yet his first pitch was a fast ball, with a hump on it, right across Crawford’s face, known to the profession as a “Beaner,” that is, a ball pitched at the bean, which is baseball for head. Wahoo Sam permitted it to flash past unnoticed and then Brown whipped a fast straight overhand ball on the inside corner across Crawford’s knee and outguessed the swattatorial star of the American League, who took a fierce wallop at the ball and fouled it to left field.

Then Brown guessed that Sam would guess that he would ruess he had better pitch a low ball again, so he guessed he would pitch a high one and Sam guessed that same way— and when Brown shot a fast ball right across his neck Sam took a gosh awful at the ball and sent it skipping along between Steinfeldt and Tinker and cut to Sheckard like a flash. There were
men on first aud second— and none out. The Detroit crowd had its first opportunity to yell. The yell that went up stirred the Detroit river, and echoed clear across to Windsor— as Tyrus Cobb, the mighty— the greatest ball player of the American League, came to the bat. 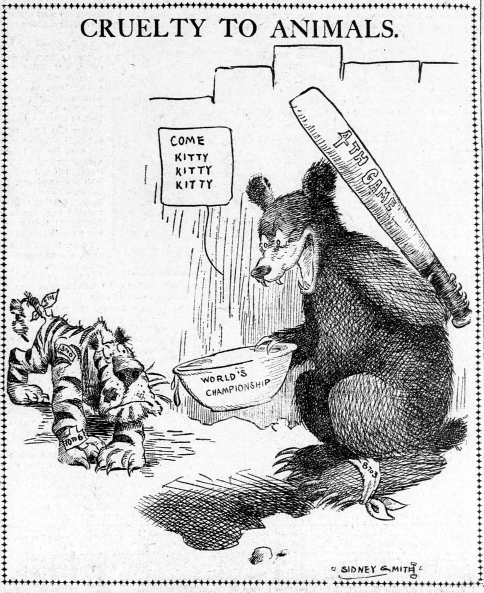 Brown Makes Play Pfiester Failed On.
The situation was exactly the same as that which confronted Pfiester in the game at Chicago, and every one knew that the play which was to be attempted was precisely the same on which unlucky Jack threw away his own game and gave Detroit five runs the previous day. Yet the situation which confronted Brown was even worse, for the men on bases were faster and Cobb a better bunter.

Brown poised and laid a fast straight ball right Into the groove for Cobb to bunt. The fleet (Georgian laid down a perfect bunt. Twenty feet inside the diamond, just to the third base side of the pitchers’ position, the ball rolled. As he pitched, Brown followed that ball through, and he was racing forward at top speed when Cobb bunted. Like a flash he pounced upon the ball, and, whirling,he threw all the force of his body and arm into that decisive throw to third. The ball flashed to Steinfeldt with terrific speed, and he held it, lust as O’Leary, with a last despairing leap, jumped for the bag.

A groan of despair went up from the crowd, for Cobb had failed, and then, while groaning, the Tiger rooters started a round of applause for Brown and his marvelous play. 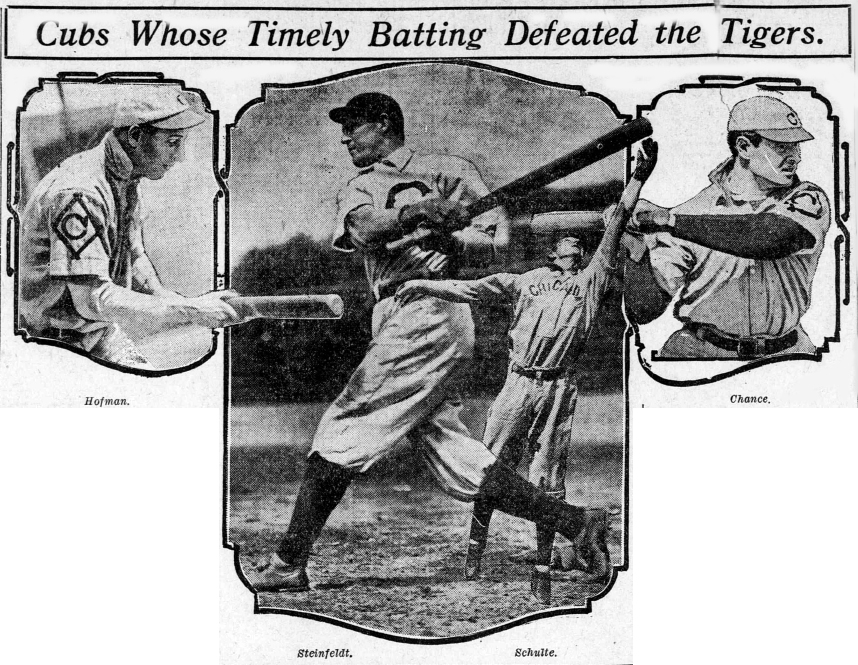 Cubs Teach Tigers Tricks
Right there the champions opened their school for baseball and began to teach the Tigers a few of the advanced points of the game. The danger was not yet over, for Rossman, always,a dangerous and determined “pinch hitter,” was at bat. Kling flashed a signal across the field. Brown nodded. Tinker took a cautious step or two backwards and those on the bench and in the stand who know the code of signals knew there was something doing. The signal was for a fast curve and Brown drove the ball on an eccentric arc over the inside corner of the plate, and as Rossman swung, the club infield made a kaleidoscopic move. Tinker dived to second base, inside corner of the plate, and, ns Rosss struck Kling’s hand he leaped forward and shot it with terrific speed to second. Brown dodged his head and the ball flashed Into Tinker’s hands, and Wahoo Sam, outguessed again, leaped feet first for the bag
and was touched out.

The sun was Btill shining, and Snmmers doing pretty well on the slab, but the temperature of Detroit’s hopes sank toward freezing, with prospects of an early frost. Still the Cubs were not done. They wanted Cobb, and Brown aud Kling were maneuvering to catch him. Two strikes they got out Rossman, and then Kling flashed Brown a signal to pitch out— that is throw wide from the plate. Brown shot a high fast oue to his battery partner, and Cobb was stealing. Like a flash Kling drove the ball towards second. The throw was high,and Kvers leaping stuck up one hand, grabbed the ball, and as he came down holding it in his hand, he swept his downward and applied the ball to Cobb’s ribs five feet from the base, as he was starting to slide.

Cubs Deprived of Credit.
And then the only thingthat marred the pleasure of the Cubs was that Rossman had swung wild when Brown pitched out, and was struck out, so they were deprived of the credit of showing Cobb up on an effort to steal.

And, with that danger past, the Cubs raced on to victory, never even threatened again with trouble. Once after that O’Leary managed to hit safe, but instantly was doubled when Crawford hit to Brown.

And of all the great Tiger slusgers only those two. O’Leary and Crawford, got hits, they dividing the four that Brown allowed evenly.

The fielding of Chance’s champions was really wonderful. Nothing could escape, and the work was fast and clean, so fast that before the finish the crowd was discouraged, and instead of applauding the Tigers turned and gave the Cubs round after round of applause as a reward for their grand work.

Jennings still fought on. raging up and down the line, anrt time and again a half dozen of the Tigers, violating the rules, ran out with bats in their hands, hoping to get a start toward a rally. But Brown, going faster and faster as the distance shortened and the need of reserving his force lessened, whirled on to the finish and scored a clean shut-out.

In the eighth, when the frost was beginning to be felt, Jennings changed seasons. He took Summers out nnd, skipping Fall, sent Winter in to finish up.

Winter got a warm reception, and in the ninth the Cubs added another run to their majority. And, sad to relate. It was the great Cobb who gave It to them, for after two men were out Cobb muffed Chance’s bard line drive, which ho reached at his shoe tops, and let Evers score the final run.

The beauty of Mordecai Brown’s performance in the fourth battle between Cubs and Tigers is best shown in the appended box score. As a result of his effectiveness Detroit’s team batting average for the series was cut down sixteen points. Ty Cobb still has the best hitting percentage, but his inability to solve “Brownie” brought him down from .531 to .450. Hofman is second with the neat average of .400. Following is a complete score of yesterday’s game, together with the batting and fielding averages of the game and series: 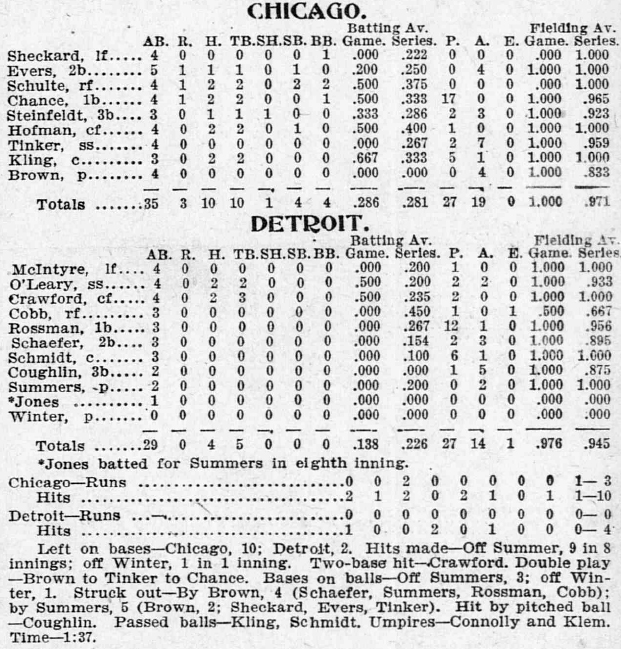