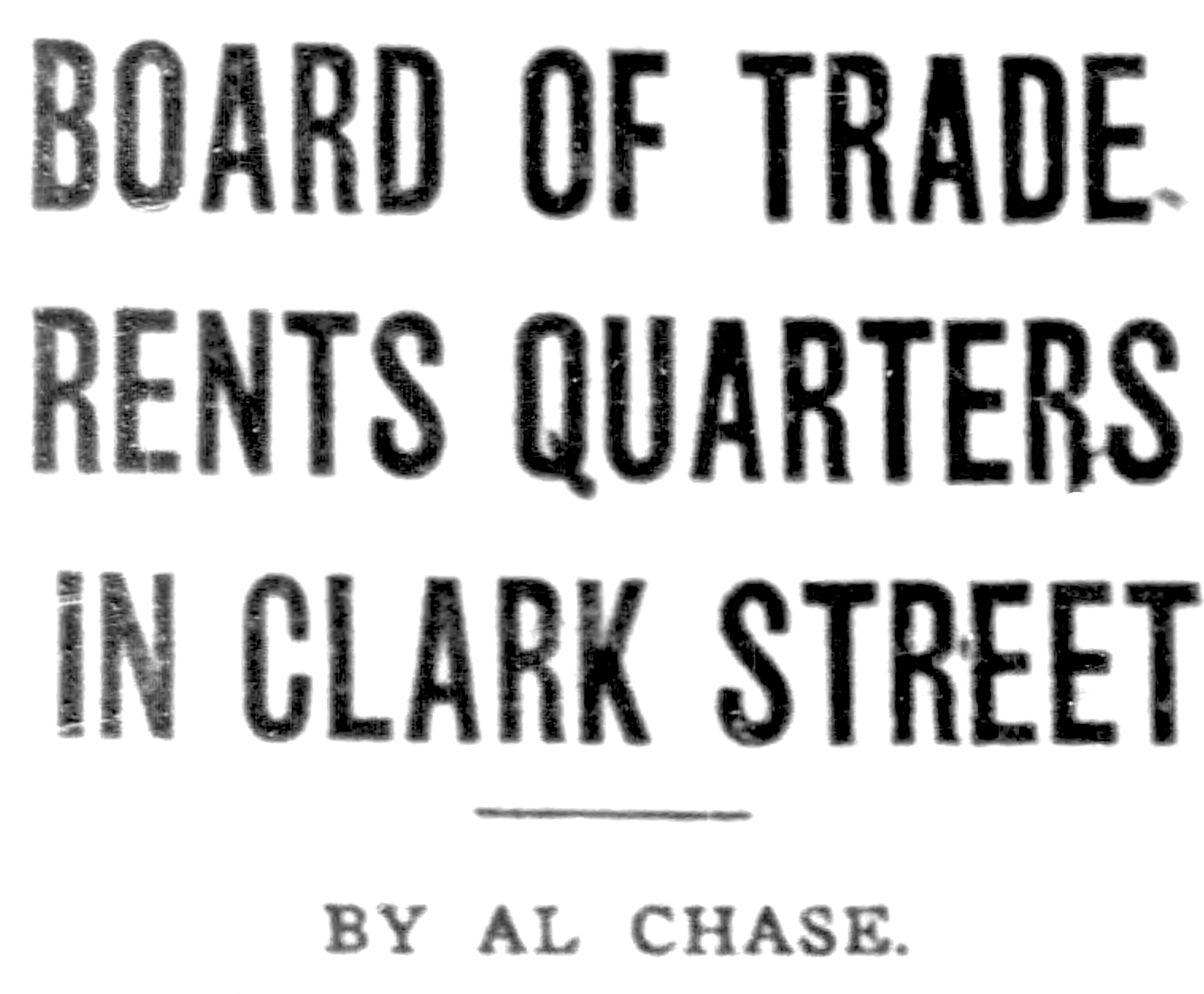 Temporary quarters for the Chicago Board of Trade at last have been arranged for. A building is to be erected by John E. Colnon, William Sutherland and others at 447-511 South Clark street, half way between Van Buren and Harrison. This has been leased by the Board of Trade for a short term and will be occupied on its completion which will be about October 1st.

As soon as the board’s activities are transferred from Jackson boulevard to Clark street the present historic and shabby old grain mart will pass into the hands of wreckers. On the site will rise the proposed towering new Board of Trade, which it is expected to be ready for occupancy by May 1, 1930.

Ends Long Search.
According to Albert H. Wetten & Co., who have been searching the loop and near-loop for months for suitable temporary quarters for the board, and who negotiated yesterday’s lease, the Clark street building has been rented until Dec. 31, 1931, but hte board has the right to cancel its lease when the new Board of Trade building is completed.

The temporary building will be designed by Holabird & Roche, who also are the architects of the new permanent structure, and will cost approximately $355,000. It will be 150×100. The first floor will be used for board of trade offices, with the trading floor above. This two story building will be used for other purposes when the Board of Trade moves into its permanent home. It may be made into a garage. 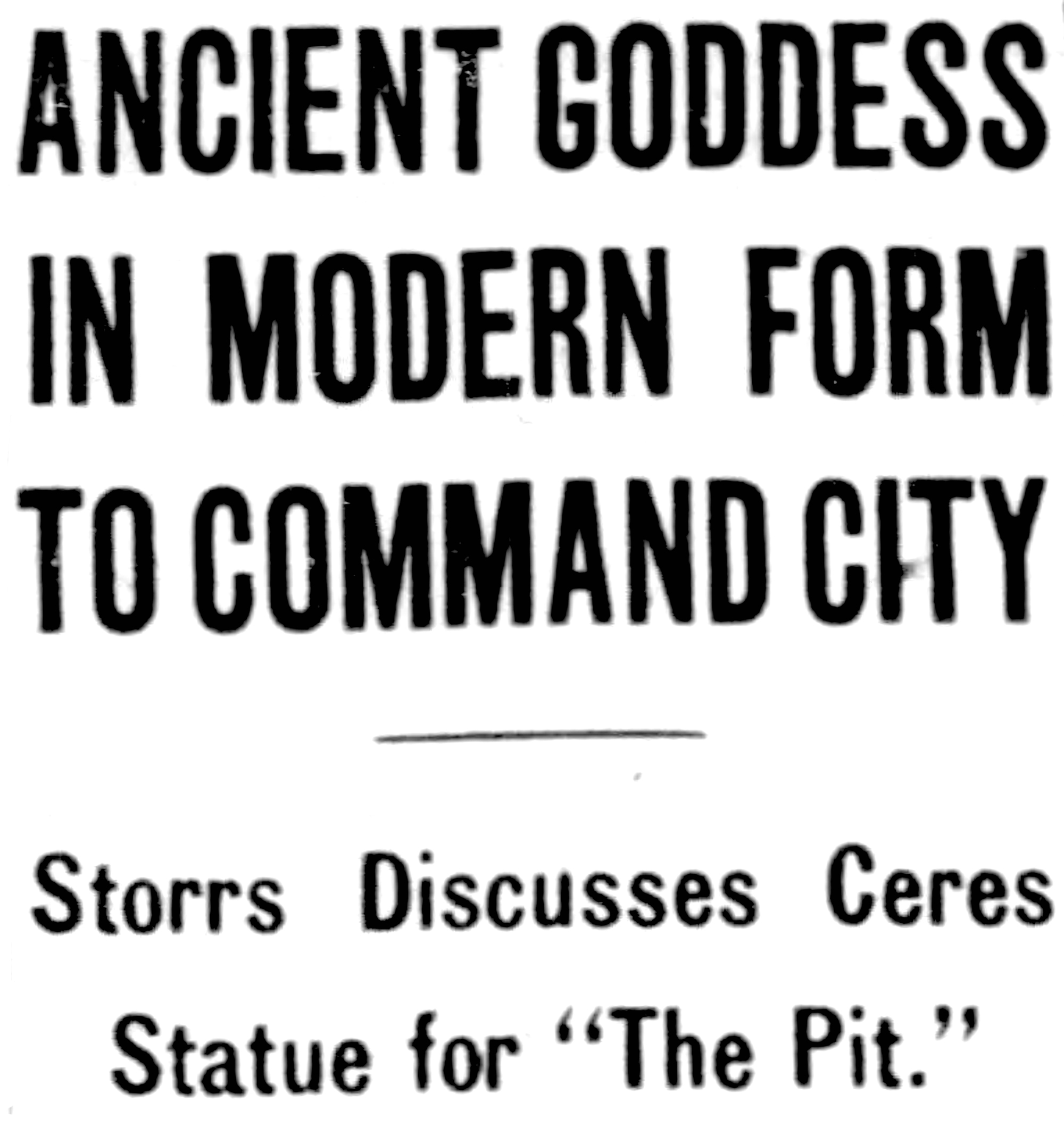 Holding a sheaf of wheat in one hand and a grain traders sample bag in the other, a heroic statue of Ceres, Greek goddess of corn and the harvests, next summer is to command the attention of pedestrians in the financial section from its lofty pedestal atop the new Board of Trade building—some’ 6oo feet above the sidewalks.

The work of casting the statue in hard aluminum is now in progress at Providence, R.I., and officials of the Board of Tra e hope that it will be put in place in time for the ceremonies which will mark the opening of the world’s most important food trading market. The date of the opening has been tentatively set for June 15.

Making the statue doubly interesting to Chicagoans is the fact that it is the work of John Storrs, a Chicago-born artist, who lives a. greater part of the time in Paris, where he has acquired the reputation of being one of the greatest sculptors of the present day. Mr. Storrs, who is now stopping in Chicago, discussed his work from his temporary studio at 105 East Delaware place.

Points to Consider.
“When I was given the order to execute a sculptural piece to cap the tall Board of Trade building, I had two major points to consider,” Mr. Storrs explained. “First I wanted my work to be in architectural harmony with the building on which it was to stand. Second, I wanted it to be symbolical of the business of the organization the structure was to house.

“The first point I have accomplished through the subject in an extremely modern manner. The vertical lines of the building itself are retained In the lines of the statue. Because of the great height at which it will stand the matter of detail did not have to be taken into consideration. The outline of a woman;s figure Is suggested rather than rendered exactly.

“As to the second point. I borrowed a thought trom the classical period. Ceres well symbolizes the activity of the Board of Trade, so I took this goddess sister of Jupiter for my subject. However, while the thought is classical, the treatment is entirely modern. 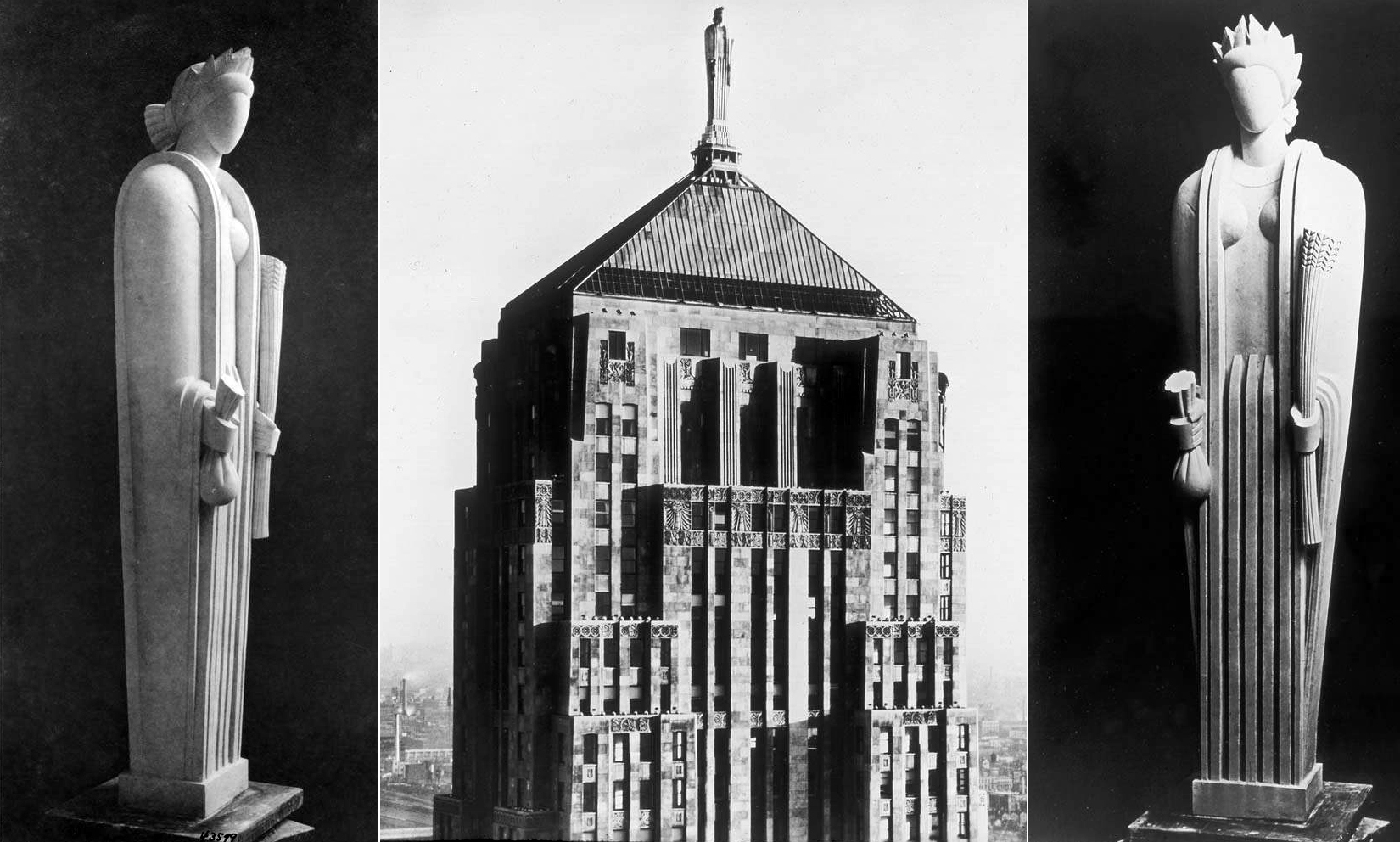 Statue done in the modern spirit of the Goddess Ceres which will stand atop the Board of Trade building. John Storrs is the sculptor.

To Be in Silhouette.
“From the street the statue appear to pedestrians mostly in silhouette. The hands holding the sheaf of wheat and the sample bag extend from the body abruptly instead of being attached to arms. The face, too. is suggested, inasmuch as there are no regular features.”

Incidentally, Chicago’s Ceres might be said to have been born In romantic surroundings, for Mr. Storrs’ studio in the Rue du Cherche Midi is located on land that once formed a part of the gardens about the residence of Mime. de Maitntenon, one of France’s most romantic figures. It was in this studio that Mr. Storrs built up the statue in clay for the forms from which it is being cast in aluminum.

The Chicago Ceres is to be thirty feet high. This work has been described by some of the nation’s leading architects as one of the finest pieces of architectural sculpture to be found in America. By architectural sculpture they mean the harmonizing of building design and sculpture so that the effect Is one of unity. In most cases sculpture is selected without consideration for the design of a structure it is to adorn.

An Ouistanding Position.
In passing Mr. Storrs said he considers the pedestal atop the Board of Trade as one of the most commanding positions for a statue to be found in America. It was especially enthusiastic in his comments on Chicago architecture. declaring the newer buildings here to surpass those of New York in design.

Mr. Storrs is the sculptor for the monument which the United States government is putting up at Brest, France. to commemorate the action of our navy during the war. This monument is to take the form of a tower 125 feet high and it will stand in a park overlooking the bay. Architectural, work in connection with it has been in charge of Ralph Mlilman, senior partner in the Chicago architectural firm of Howard Van Doren Shaw Associates. Mr. Storrs also is making a heroic statue of Christ, which Is to be placed In the new, modernistically designed Catholic church at Cork, Ireland. This church was designed by Barry Byrne, another Chicago architect. And, finally, Mr. Storrs has been asked to submit designs for sculptural work to adorn the administration building of the 1933 Chicago fair. 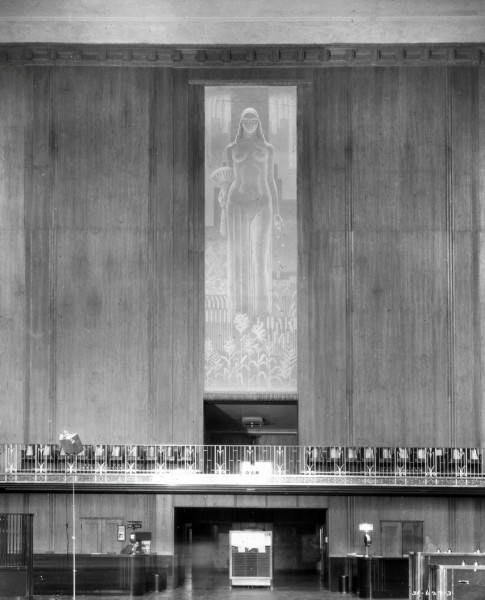 Ceres, goddess of grain and harvest, overlooking the trading floor of the Board and Trade.
Mural by John Warner Norton. 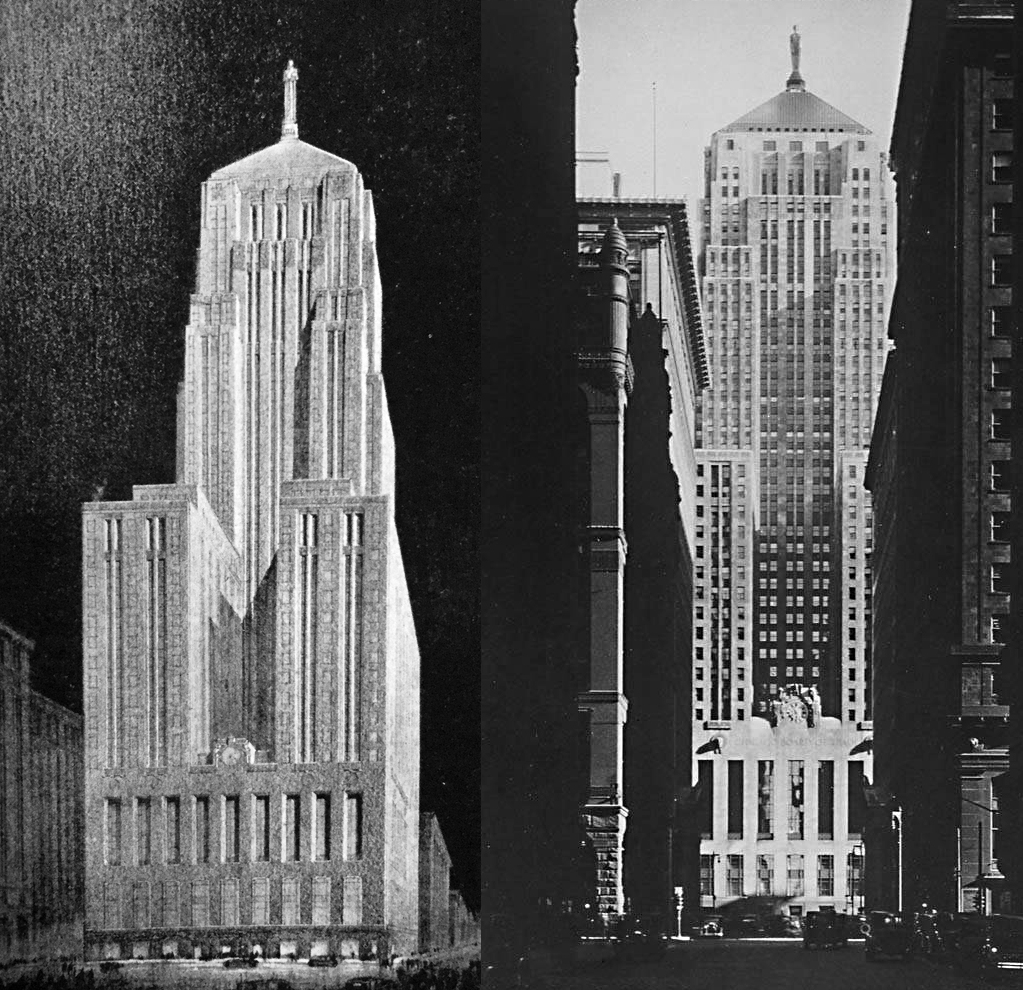 Model of the new Board of Trade and the finished building. 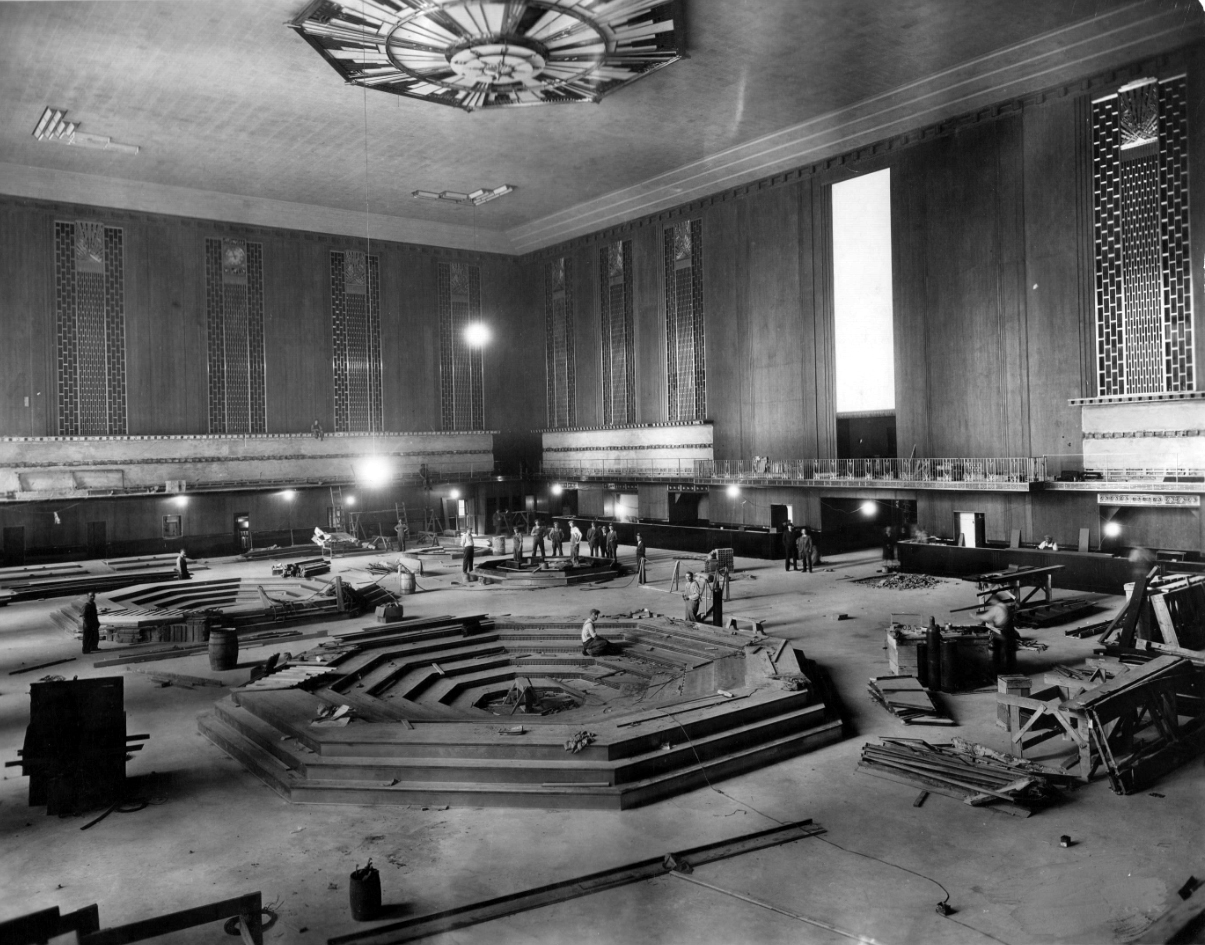 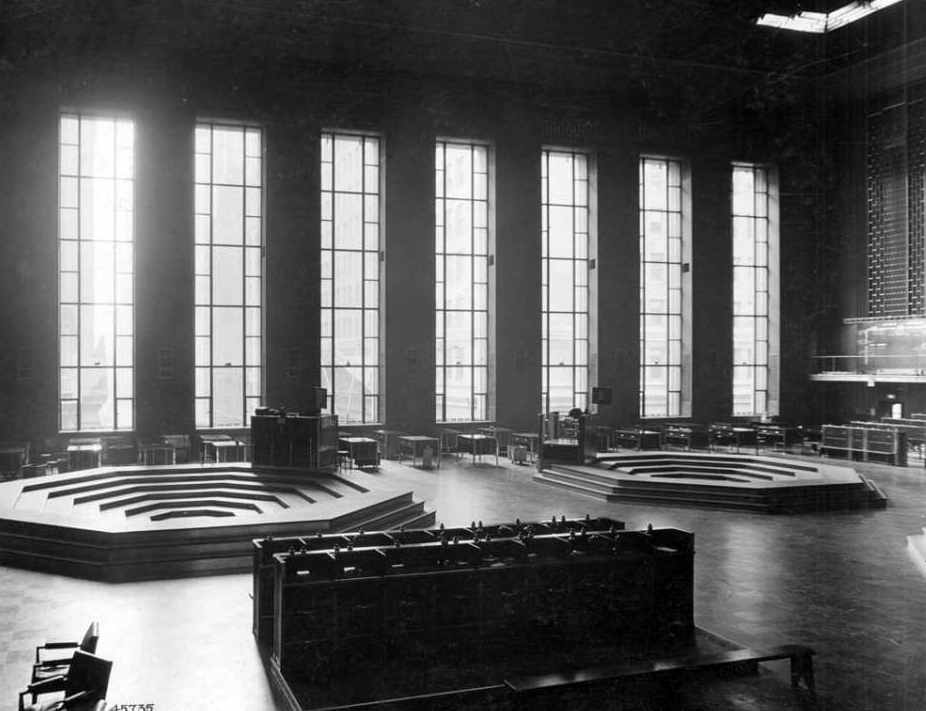 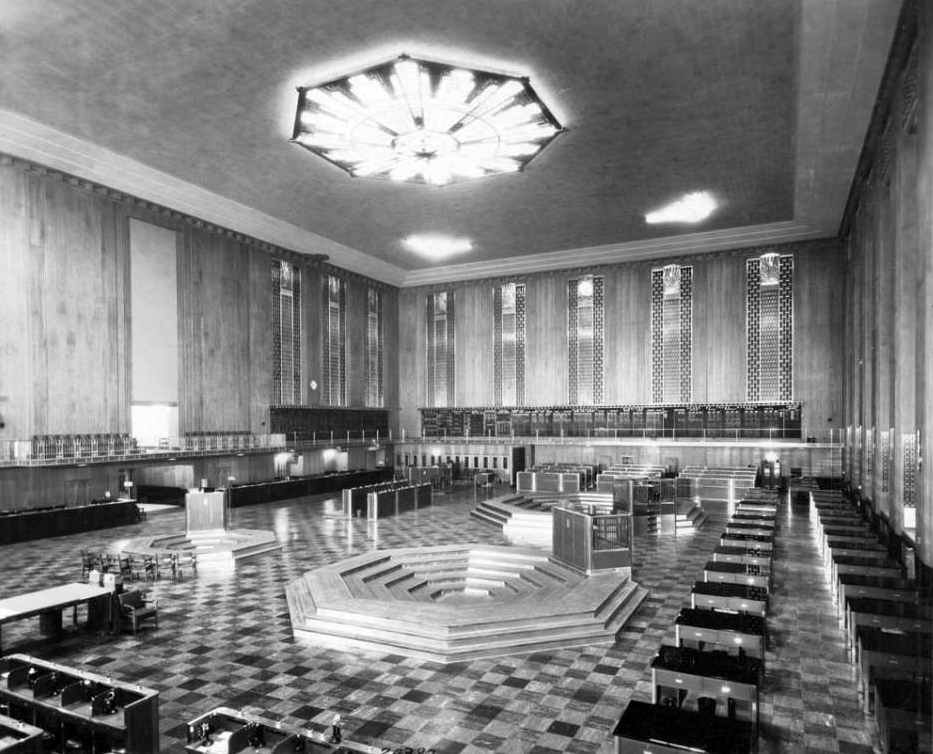 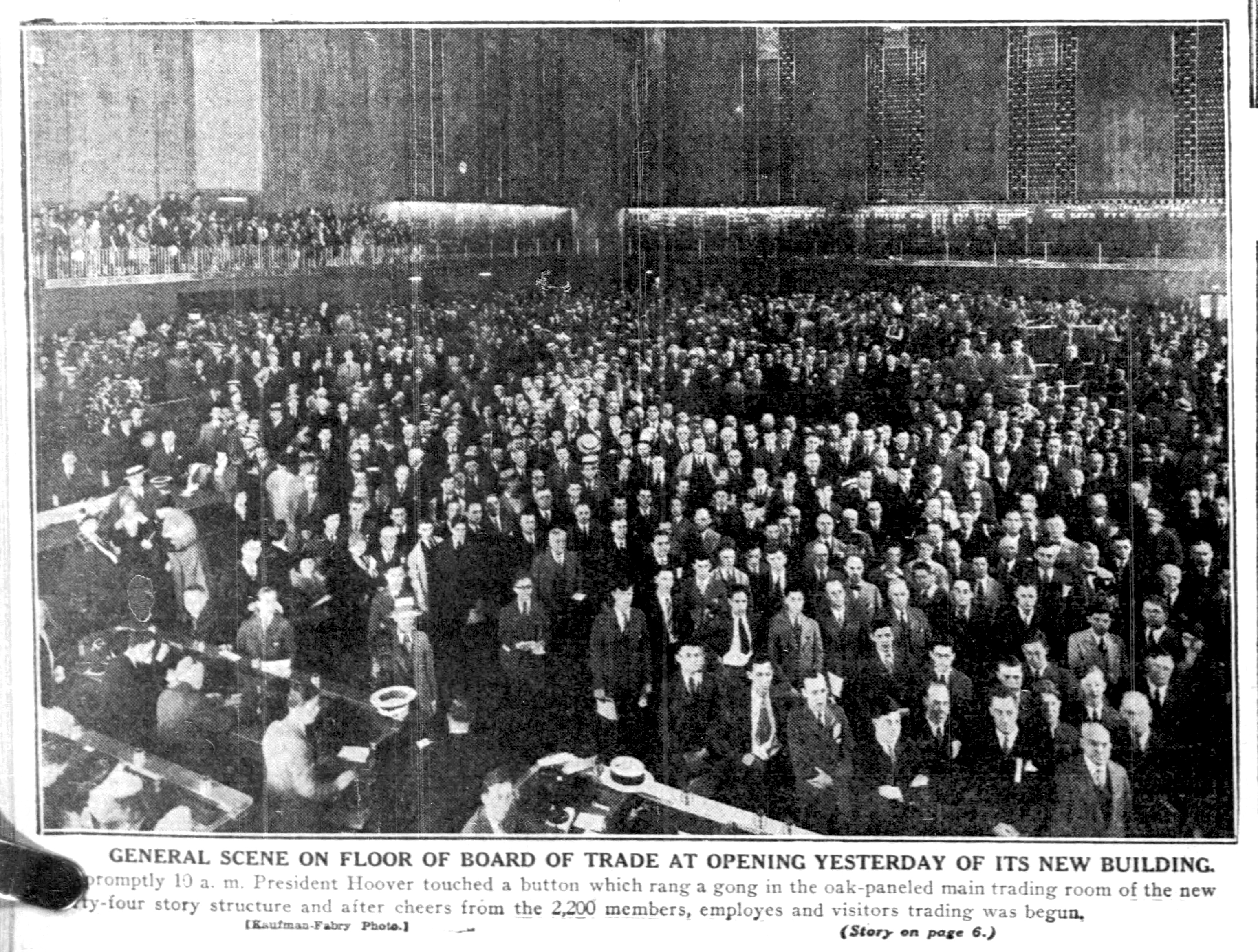 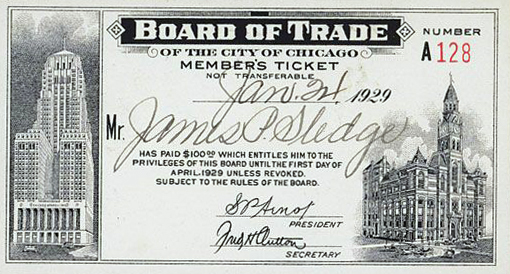 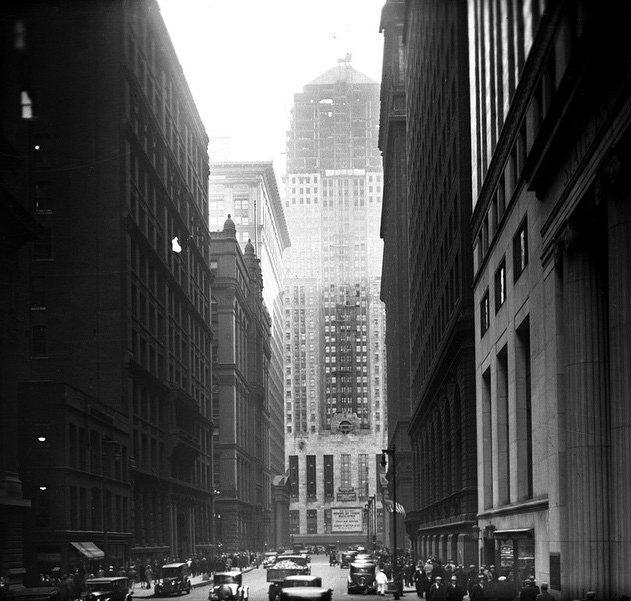 Chicago Board of Trade under construction
1929

Chicago Tribune July 14, 1929
The wheat plt will be the largest of the four trading pits. This will measure thirty-eight feet in diameter. At the top of the trading room will be a light forty-four feet long to illuminate the proceedings.

Holabird & Root designed the new building. The Hegeman-Harris company has the general contract and Albert EL Wetten & Co. have the renting of the structure. 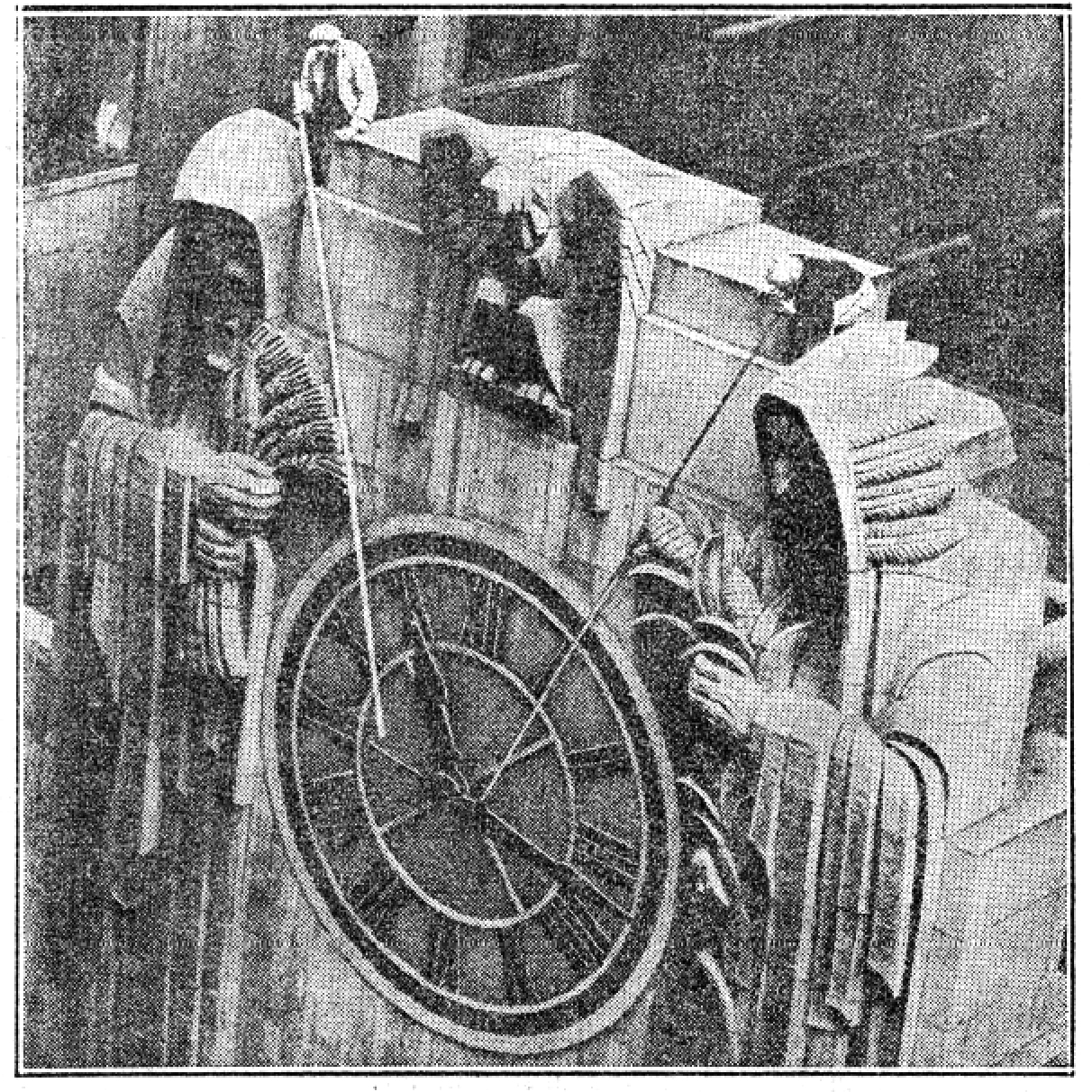 GIANT CLOCK SET BACK; DAYLIGHT TIME ENDS
Leonard Venturono and Edward Hoyer pushing- back hands of mammoth timepiece on Board of Trade building. Chicago returned to standard time at 2 o’clock this morning.
September 30, 1934.

From “Chicago Welcomes You” by Alfred Granger, 1933

The whole street from the river to Jackson Boulevard is typical of the strength and solidity of Chicago and is dominated by the towering Board. of Trade, the grain market of the world and one of the world’s most impressive structures. This building is one of the most recent creations of the young firm of Holabird and Root and both members of the firm have an architectural heritage, John Augur Holabird being the son of Col. William Holabird, one of the originators of the skyscraper, and John Root the son of the genius whose name he bears.

In the making of the Chicago of today these two young men have played an imperishable part as we shall see in our inspection of Chicago architecture. The Board of Trade Building, 52 stories high, is wholly modern within and without and occupies an unparalleled situation in the city at the head of its most important business street. At the apex of the tower gleams John Storr’s symbolic statue of Ceres, the goddess of the grain which feeds the world. The great trading room occupying the entire Jackson Boulevard frontage of the building on the main floor is the grandest room in the city. It is 45 feet wide without a column in it and in height is equivalent to five stories.

The walls are wainscoted from floor to ceiling in African Mahogany treated in a novel and original manner so as to accentuate the height. Note the treatment of the ceiling, the lighting fixtures and the design of the floor. 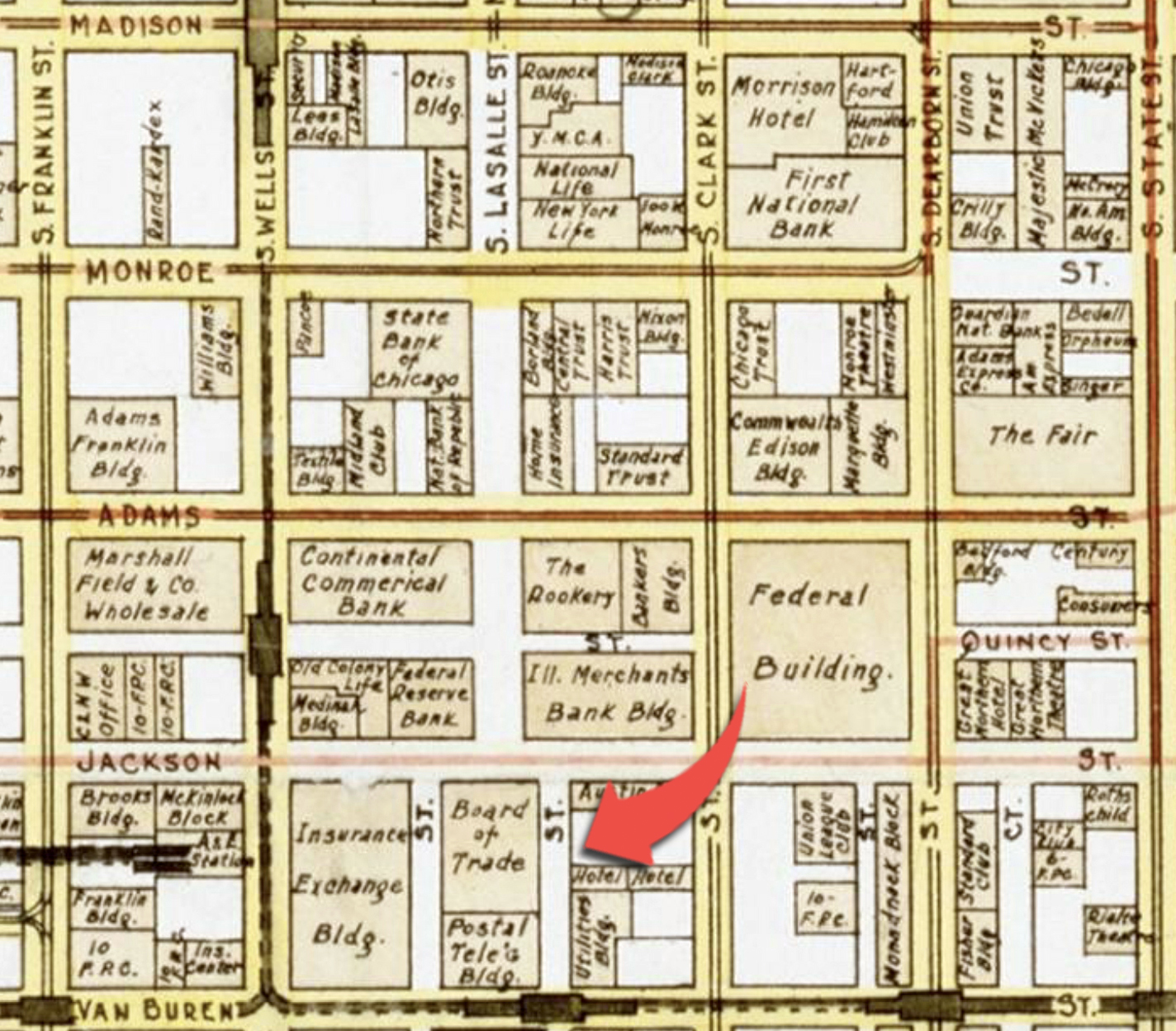 Board of Trade
Chicago Land Use Survey
Map 2-F
1942