CHICAGO WOMAN’S CLUB building, at 72 E. Eleventh street, was built in 1928, six stories high, with one basement, on wood piles. Holabird & Roche were the architects, and Frank E. Brown the engineer.

Acquired by Columbia College in 1980 as the school’s Theater Center, it currently houses a renovated 400-seat theater,classrooms, and space for film and photography studios. 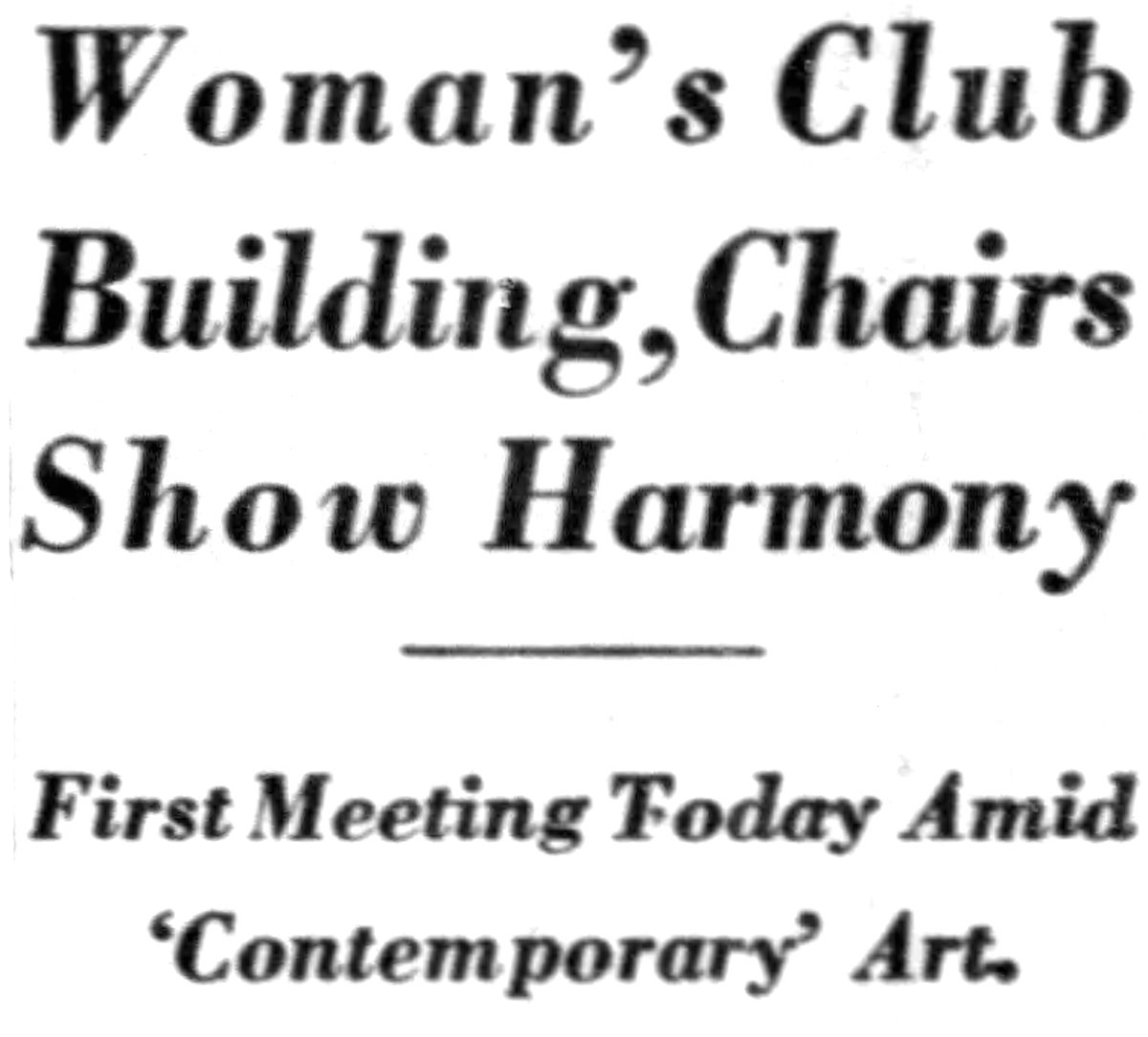 BY KATHLEEN M’LAUGHLIN
Fifty-three years and ten blocks removed from the struggling organization of its early days, the Chicago Woman’s club today is a reincarnation as it takes possession of Its new home at 11th street and Michigan boulevard. Dowager that it is among Chicago woman organizations no debutante on the list can demonstrate more vivacity than impending events in the new club will require.

President David Kinley of the University of Illinois will deliver the dedicatory address from the stage today. Two of the club s founders, Mrs. Fanny J. Howe and Mrs. CarolUne Browne, will be present.

Inspiration for the functions at hand this week is not wanting, however, anywhere in the six floors of the structure, which would be styled “modern,” were it not that members prefer the term “contemporary,” employed by Johns Hopkins, head of the decorating department of Holabird and Root.

This, incidentally, is one of the first buildings In Chicago to be synchronized as to architecture and decoration, the one firm having handled the entire building. Not more three pieces of furniture in the club were not designed especially for it. 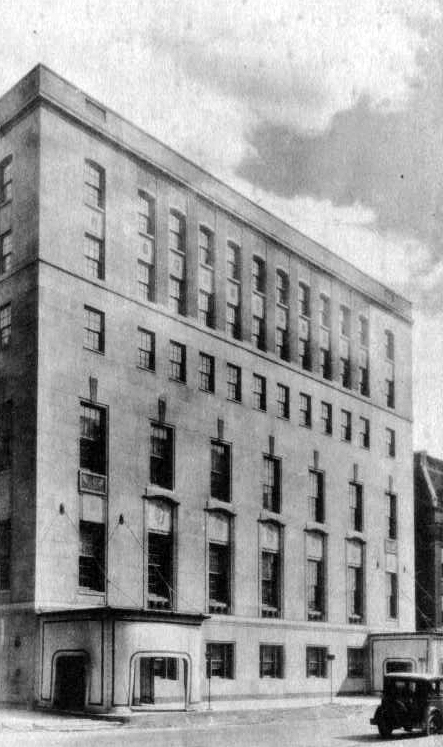 One of the most interesting features in the building is the huge rug in the reception room on tho first floor. That rug was designed by Mr. Hopkins and woven to fit the room. It carries out in its pattern the soft blue tones of the other furnishings, and embodies the geometrical figures on which the “contemporary” decorative motif is based.

Color schemes of rooms throughout the club are correlated. Stairways winding gracefully from floor to floor carry through the note of silver that is used everywhere against the Iback ground of the varying tones in furni. ture and walls.

Thus in the reception room, the silver is contrasted with the tones of blue; on the floor above, the main dining room rejoices in silver unholstered furniture, reflected against the delicate green of the walls in the ceiling high mirrors. Up another flight is the main lounge, a symphony of violet and gold divans and lounging chairs, with a large marble fireplace at either end from which the color scheme was taken. The walls here are panelled in walnut.

Beyond the lounge is the library—with its unique lamp of Lalique in the shape of the earth, continents and topography outlined In the globe—and the shelves of beautifully bound volumes. Next to that is the board room, with only its amethyst and its amethyst carpet to relieve the silver sheen of its walls, its long table end chairs. Members point out that the walls may be washed with soap and water.

A gay card room is boldly decorated In black and gold patterned paper, with tables and chairs in black and gold, contrasting with woodwork and carpet of a tomato tint.

If the punishment should fit the crime it ought to be equally desirable for the reward to fit the achievement. Thus while the Chicago Woman’s Club expects no material compensation for its altruistic activities it is appropriate for an organization which has fostered civic beauty to attain a club house that will be a joy forever. In this connection the word reward must be used in the sense that virtue is its own. The beautiful building on Eleventh Street is no token of esteem bestowed by an outside agency, but simply another of the concrete accomplishments of the accomplished club itself. It was built, financially speaking, by the efforts of club members, and in creating a suitable home for themselves they characteristically contributed a notable landmark to the Town.

Although it is putting the cart before the horse to mention the club building before the club activities, the temptation is irresistible. Standing on the north side of Eleventh just off Michigan Avenue, it is an example of what can be done to enhance the near South Side (Illinois Central please note). Its simple dignity (within comparing distance of the Field Museum and Shedd Aquarium) proves that the classical period had no monopoly on distinguished architecture. The only fault I can find with the building is that it offers no detail with which I can find fault. I can only lavish praise upon it, a task infinitely more difficult for a writer and less amusing for a reader than heaping coals of fiery criticism.

While this is the oldest woman’s club in Chicago, it has the newest home chronologically and in respect to its decorative treatment. The club rooms are notable for three things: they are beautiful; they are comfortable; they are modern. The architecture is an uncommonly fine example: of the belief of usefulness; the club’s unfailing belief in the usefulnerss of beauty is expressed in the furnishings and extremely effective color schemes. Members explain that the style of the club is “contemporary.” The uninitiated would call it modern; but obviously it is far removed from the atrocitIes committed in the name of moderne. When I tried to say something of this sort to Mr. Holabird he enjoyed my comments as much as a man welcomes the gift of a ten cent cigar when he has in his pocket a caseful of Corona Coronas. Therefore, with the oermission of THE CHICAGOAN, I take this opportonity of repeating in a louder, more emphatic tone, that the Chlcago Woman’s Club building is beautiful enough to increase the waiting list of prospective members by many thousands.

But the club is more than a building. In their civic endeavors the members have learned that stone walls do not a club make, nor soft green chairs a thriving organization. When the membership was twenty·one (it is now about fifteen hundred) Ihe club met at the home of its founder, Mrs. Caroline Brown. From there it moved to the old Palmer House and next to the Art Institute, then resident in the Chicago Club building which recently tried to emulate the one-hoss shay and is now being rebuilt. For the twenty-five years ending last April the Chicago Woman’s Club conducted its affairs from the top of the Fine Arts Building. There it took up quarters at the time when the building ceased to house displays of Studebaker carriages for the benefit of the owners of fine horseflesh and began instead to court that seldom steed called Pegasus.

While these various rooms have been lhe scene of many meetings over a period of fifty·three years, the members have never regarded them as more than a base from which to launch crusades against civic infidels, a laboratory making researches in education, philanthropy, arts and literature, and not merely sharing freely the results of the experiments, but forcing them upon a recalcitrant school board, library, police or health department. In the days before woman’s place was anywhere that she chose to go, the Woman’s Club served as a psychological transformer by means of which a woman’s excess brain power could be converted into energy of suitable form and voltage for civic activity. Thus, in effect, it was and is a training school capable of preparing women for direct and personal participation in social move·
ments.

Before the club added bedrooms and three kinds of dining rooms to its household equipment there was no possibility of sneaking up on it at any time when it was open for business without finding a class or a committee, board or general meeting in session. Now that it no longer shuts down when the Fine Arts Building elevator operators go home it is probably running three shifts of workers.

To catalogue the club’s activities would be to compile something comparable in size to the Chicago telephone directory. The pies in which it has had all its fingers and both thumbs have ranged from the first legislation on compulsory education and the establishment of the Juvenile Court to the genesis of Sunday afternoon concerts at the Art Institute and in 1915 the furtherance of typhoid relief work in Belgium. Pioneer among women’s clubs, the Chicago Woman’s Club has never stopped pressing forward into uncharted regions of activity. One of the club’s proud recent achievements was the establishment of the first nursery school to be operated within a public school in the United States. From time to time, as the city and the state catch up with one or another of the dub’s modem ideas, governmental agencies take over the privately fostered enterprise. Examples of this are the free kindergartens, the night schools, vacation schools, and the work for the blind, which are only a few of the enterprises which long had the support of the club.

But if education does not end at home, like charity, it begins there with a curriculum 50 comprehensive that it puts the club in competition with the colleges. If a member does not choose to work for anything but her own immediate good she can easily put in a six day week at the club being educated by professional teachers, lecturers, and leaders in every field of human endeavor. If she wishes to participate actively in the affairs of city and state she will find countless opportunities, for not only does the club initiate a bewildering number of activities but it lends a hand to the multitudinous civic undertakings that constantly apply for help.

Altogether, the Chicago Woman’s Club is a very versatile body. The only things it refuses to consider are increasing its membership and lowering its standards.