THE ADVENTURES OF KATHLYN, No. 5—A Colonel in Chains (Feb. 23).
—With Kathlyn’s revelations of herself as a slave. Prince Umballah, her purchaser, has her imprisoned in the dungeon of the royal palace. There she finds her father, whom she was led to believe had been dead. That worthy gentleman, enraged, tries with his bare hands to end the life of the hateful Umhallah, who intrudes upon their presence, but is dragged away by his retainers. This is brought about when Umhallah informs Kathlyn that she is to be the favorite of his harem. This so infuriates Col. Hare that he is about to strangle the dusky Prince, when Kathlyn implores him not to stain his hands with blood. Umhallah staggers to his feet, furious with rage, leaves the place vowing vengeance, promising to return with the executioner to publicly flog his prisoner. As he staggers up the steps in the corridor of the palace, he encounters Bruce, the American hunter, who has found his way into that labyrinth in search of Kathlyn. Umballah suspicions him, questions him and then orders him taken from the palace. In the throne-room Umhallah finds his Councillors, makes his complaint, and it is agreed that Col. Hare must suffer for tampering with his sacred person.

A big baboon escapes from confinement and in prying about perches upon the prison window in\the very cell in which Kathlyn and her father are confined. This alert young woman conceives the idea of communicating with the outer world, sending by it a message to its keeper so that Ahmed will get it and further their plans for escape. She rips the insole from her shoe, and writes with the Colonel’s indelible pencil:

In the palace prison. Help.—Kathlyn.

She ties this about the neck of the monkey and then it is captured by Ahmed, who, seeing the message, at once takes it to Bruce. The resourceful American consults with Ramabai, and they conclude to drive an elephant up to the prison window and pull out the bars. This is done, and so much of the masonry comes free that Kathlyn easily escapes through the opening, but Col. Hare, securely chained to the pillar in his prison, is unable to get away. He tells his daughter to leave, as fortune will free him; so she reluctantly hurries away to the H’are bungalow in the jungles of Allaha. as the scene dims.

Kathlyn’s safety having been secured, she immediately begins planning how to release her father. The first move in this project is to secure Umballah by strategy. They accomplish this with the aid of the fascinating Pundita. who pretends to have turned against Kathlyn and assumes to wish to effect her capture. Umhallah, disarmed by rage, immediately starts out in quest of his prey. On arriving at the bungalow, he rushes into the room, hut suddenly finds the door barred behind him by Kathlyn. who is holding a leopard in leash. Thus they take advantage of his fear, and he is forced to sign a release for Col. Hare from the palace prison. Having secured this important document. Bruce. Kathlyn and Pundita, leaving Umballah guarded by the leopard, rush to their elephant with their impedimenta and start to a rendezvous in the jungle, where they are to meet Col. Hare, who is to come when released through the medium of Umballah’s message. 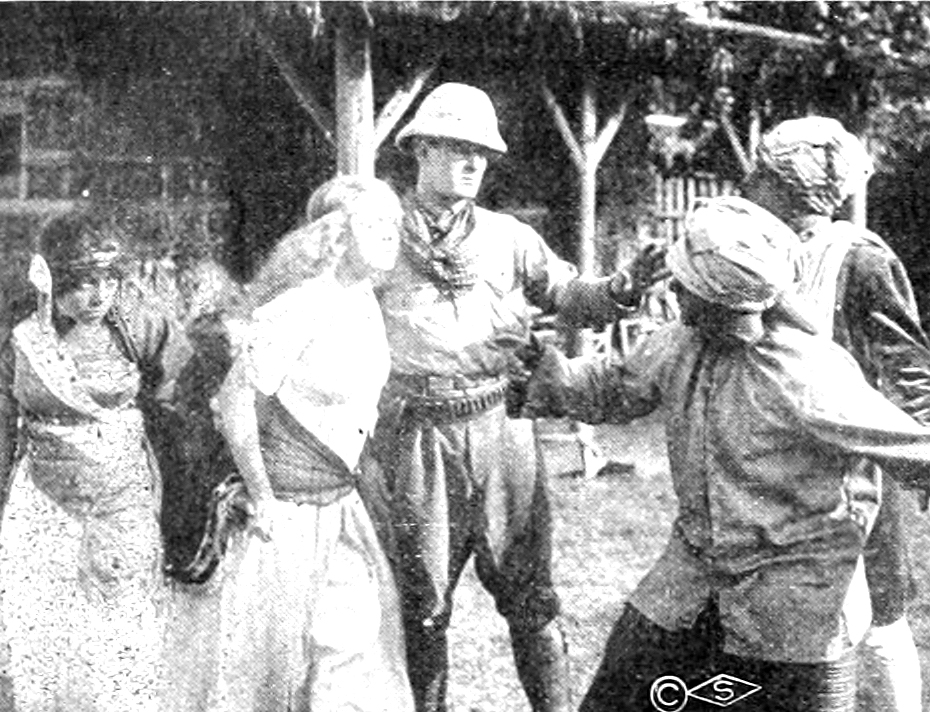 Umballah, having finally affected his escape with great difficulty, returns to the palace—but too late. The messenger has filed his order, the prisoner has been released, and is well on his way toward the coast. The vengeful Parsee prince, however, is not to be so easily outwitted, and starts his retainers and dromedaries to intercept the flight of the Amerioans. Umballah, coming up with the rear of the procession, takes a long distance shot and wounds Kathlyn. 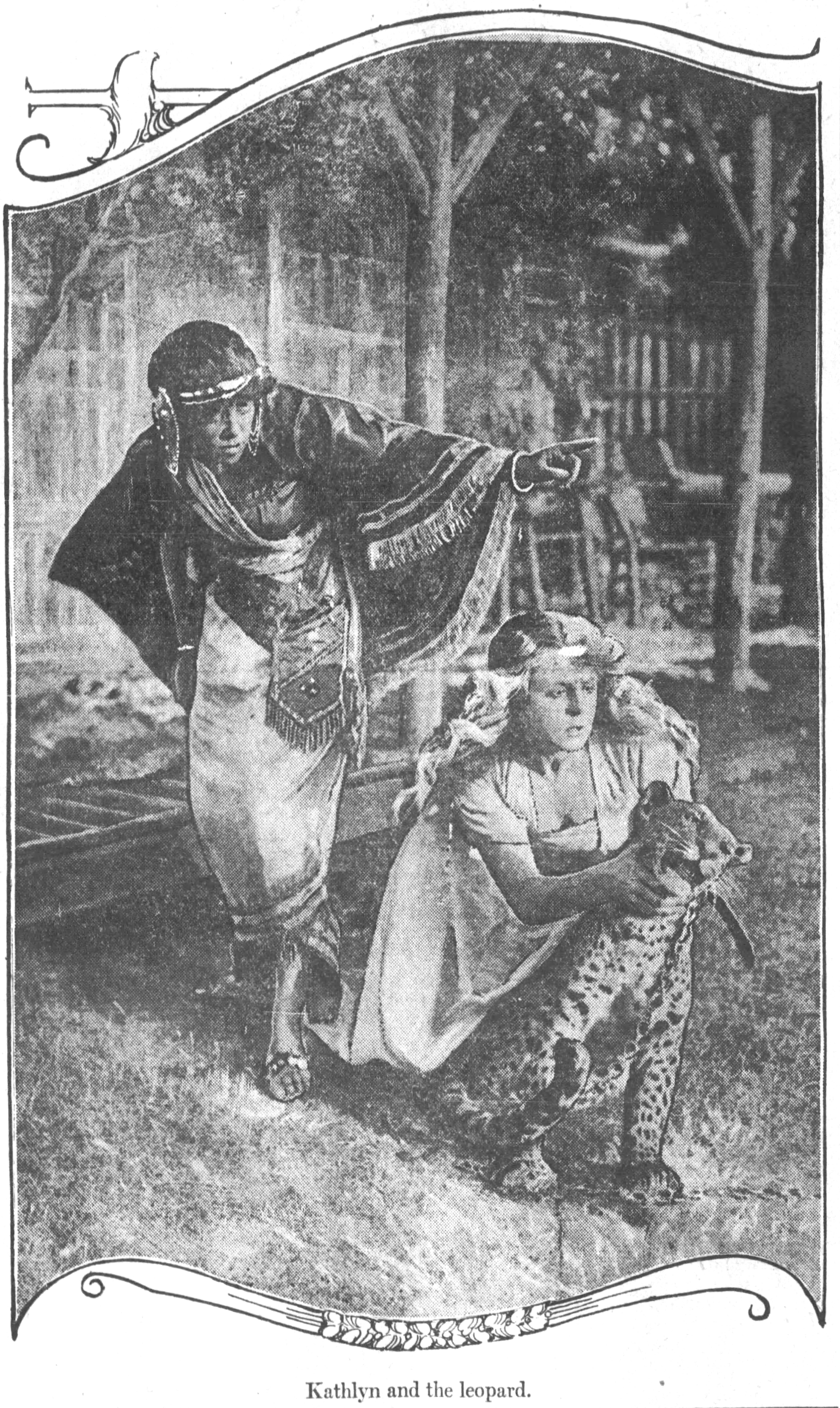 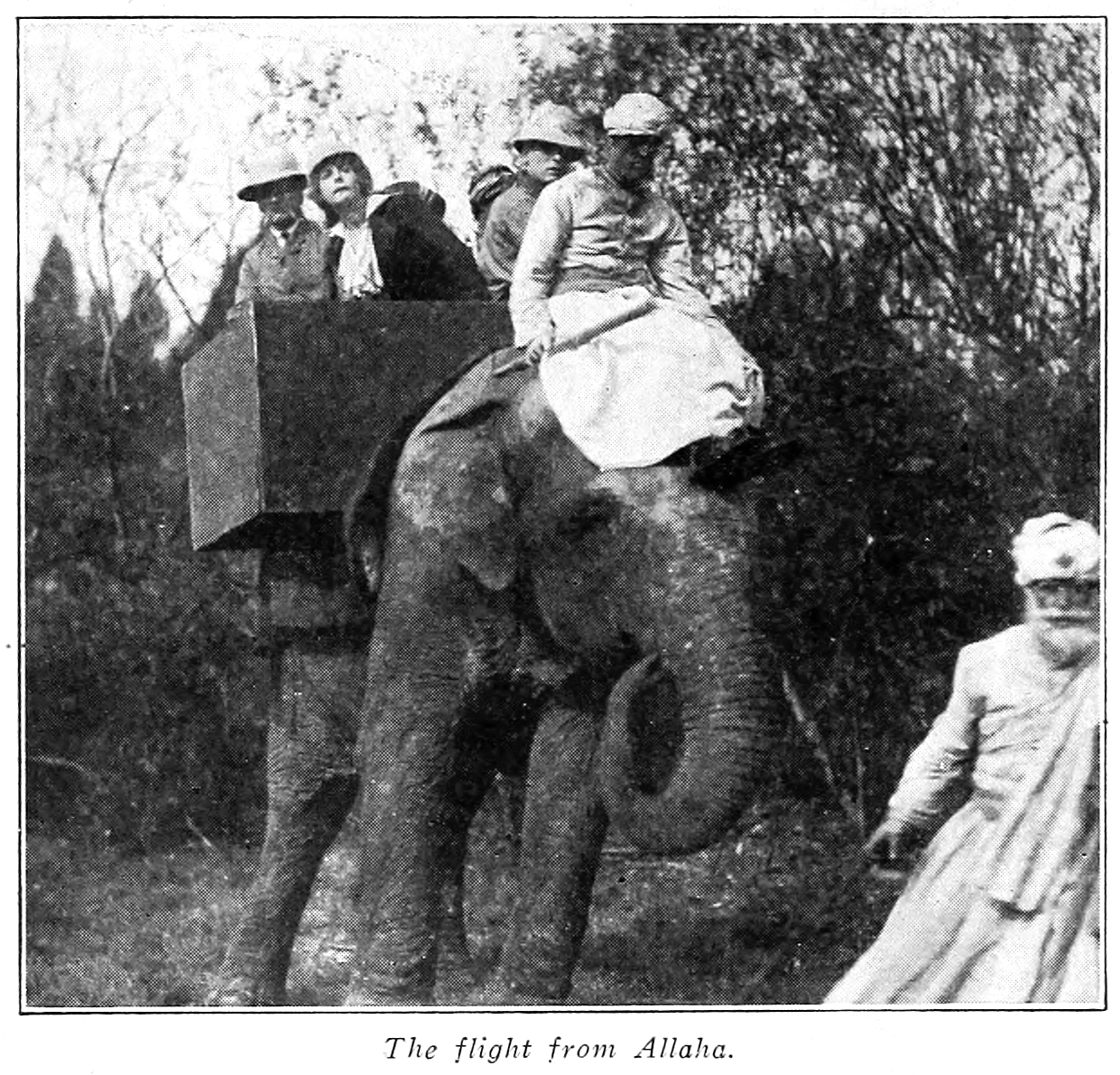 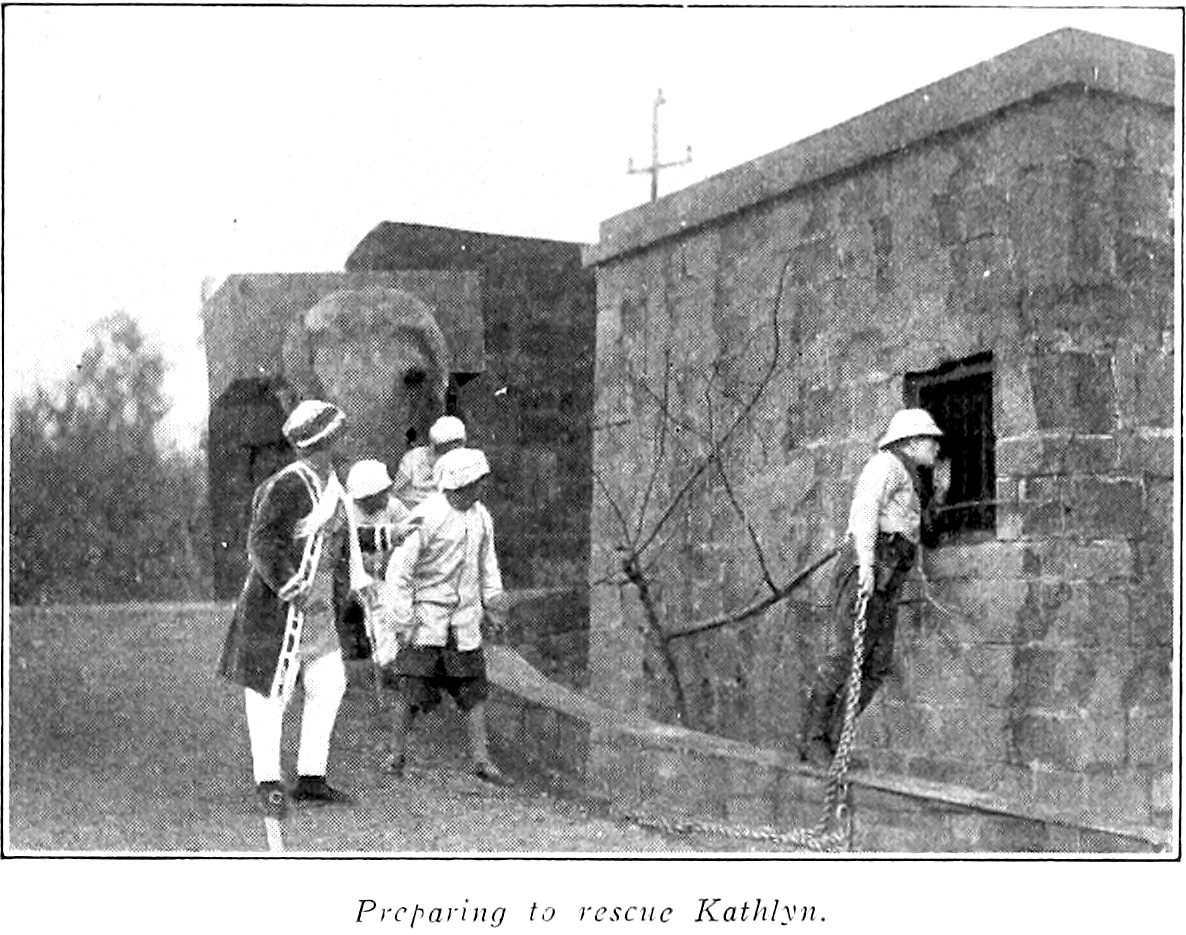 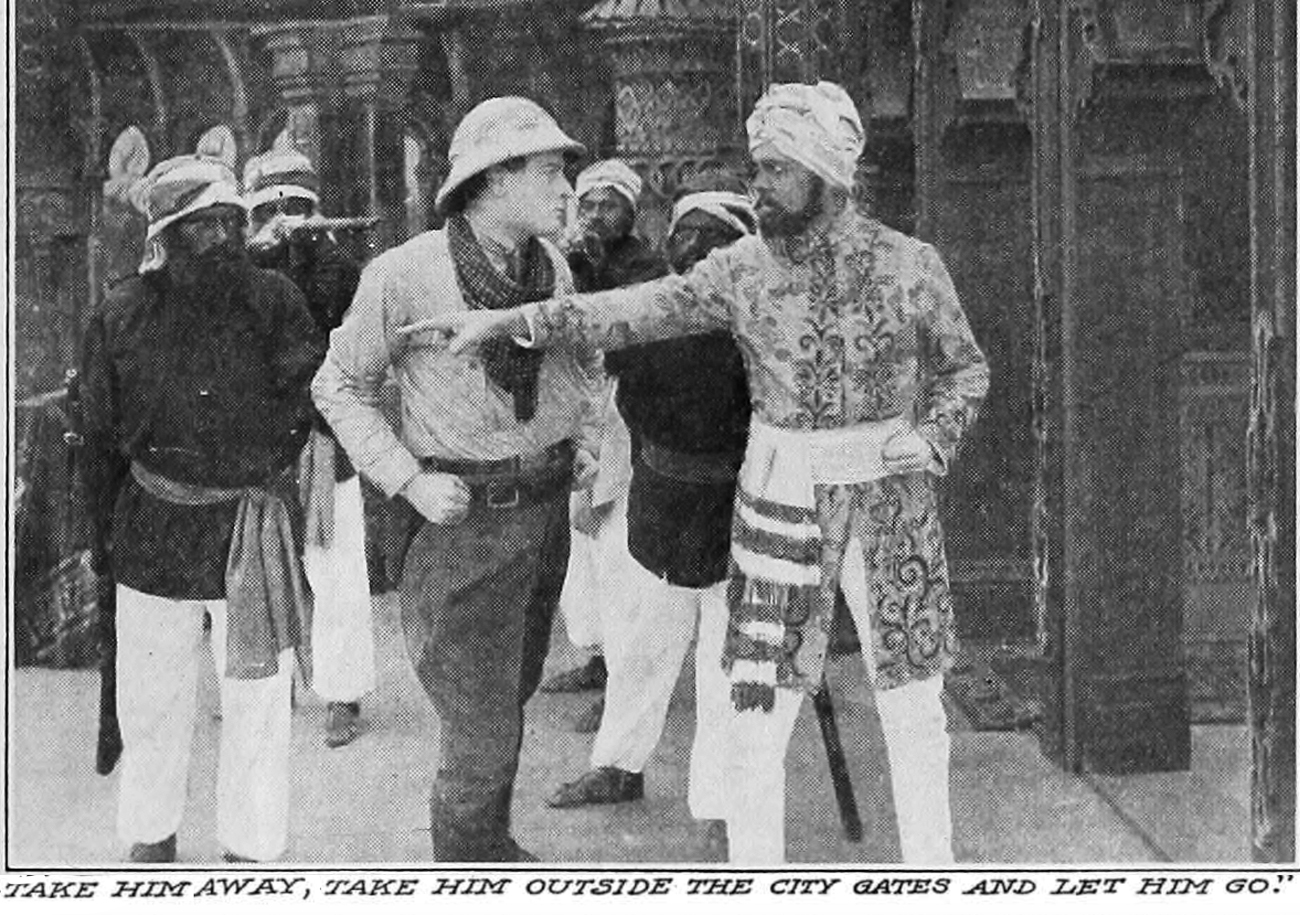 The vogue of the Kathlyn series of pictures keeps on increasing, and congratulatory letters are pouring into the Chicago office of the Selig Polyscope Co. from all parts of the country. Contrary to the opinion of many, this serial photodrama has met with great success, but it must not be overlooked that to achieve this a unique, far-reaching and continuous publicity campaign has been necessary to keep up public interest. This publicity campaign, clever as it is and ably and resolutely as it has been conducted, would have fallen short of the mark had it not been for the well constructed scenario, with its thrilling interest and incidents, its well connected story and the electrifying .climax at the end of every set thus far. These climaxes are almost ex- asperating, so eagerly do they leave us guessing and flounder- ing when the “To be continued” announcement flasihes on the screen.

Set No. 5 strikes me as being the most sensational so far. It is fairly crowded with action, and the two reels unfold themselves without any perception on our part of the passing of time. For half an hour one is actually oblivious both of time and environment. We are away off in the fabled Allaha, close in touch with the heroine, her misfortunes and triumphs.

Like her we are astonished to find Colonel Hare, her father, who was supposed to be dead, a prisoner in chains, in the dungeon of the royal palace. As the purchased slave of Umballah we see her rush into the arms of her parent, while the rascally Umballah tortures the old man with the information that his child is now chief slave in the royal harem.

The terrific struggle as the colonel attempts to strangle his enemy with his bare hands makes our breath come fast, ana our jaws snap with disappointment when the deed is inter- rupted by the intercession of Kathlyn. Then we snarl at the scenario man for balking us of our prey and immediately afterwards forgive him, knowing that he has further use for the fellow, although such use may again contribute to our mental torture.

Another sensational scene in this set is the rescue of Kathlyn from the prison. A big baboon lights on a window sill of the prison one day, from a tree nearby. The alert mind of Kathlyn sees in the presence of the creature a chance to communicate with her friends, Bruce and Ramabai. Rip- ping the insole from her shoe, she writes a short message on it and ties it around the ape’s neck. The animal is caught by her friends and soon they are on the way to rescue her. Unable to remove the heavy iron bars from the window of her cell they attach a chain to them, and the big elephant pulls the entire window and a section of the solid masonry out. Colonel Hare is left behind, as his chains cannot be severed in the short time allowed.

Kathlyn’s plot to release her father affords another thrill. Umballah is forced to write an order for his release, having been decoyed to Kathlj’n’s hiding place by Pundita, where he is threatened with death by a fierce leopard. Afterward we see Kathlyn. her father and friends fleeing away from Allaha, with Umballah and his soldiers in swift pursuit. Set No. 5 closes as Kathlyn is wounded in the arm by a bullet from Umballah’s musket.

Set No. 6 shows Kathlyn and her party continuing their way to the coast, after repulsing Umballah and his men. On their w-ay they come to the great walled city in the desert,
where the interesting an dcomical incident of the sacred elephant occurs. This tiny pachyderm, with the white, glaring eye, is a whole host in himself, as he is the cause of great concern,plottingandfighting. Heisstolenbybrigands,and is recovered by Bruce, Colonel Hare and others of the party, much to the delight of the rajah in whose kingdom the
walled city prospered.

The journey to the coast was then continued. Brigands,
the verv men from whom the sacred elephant had been recovered, surprised the travelers and made them prisoners. They discovered in Colonel Hare the white king of Allaha and placed his ransom at three bags of silver, and messengers the result Umballah and an armed force arrived at the brigands’ camp and delivered the three bags to the chief for the person of Colonel Hare. “You may feed the other two,” meaning Kathlyn and Bruce, “to the tigers.” he said, as he rode away with his prisoner. Thus endeth the sixth set.

The imposing backgrounds and scenes in these sets, like those in sets Nos. 2 and 3 formerly reviewed, have the true Oriental atmosphere. Many of the scenes were actually taken in India. The acting and photography are of high merit. 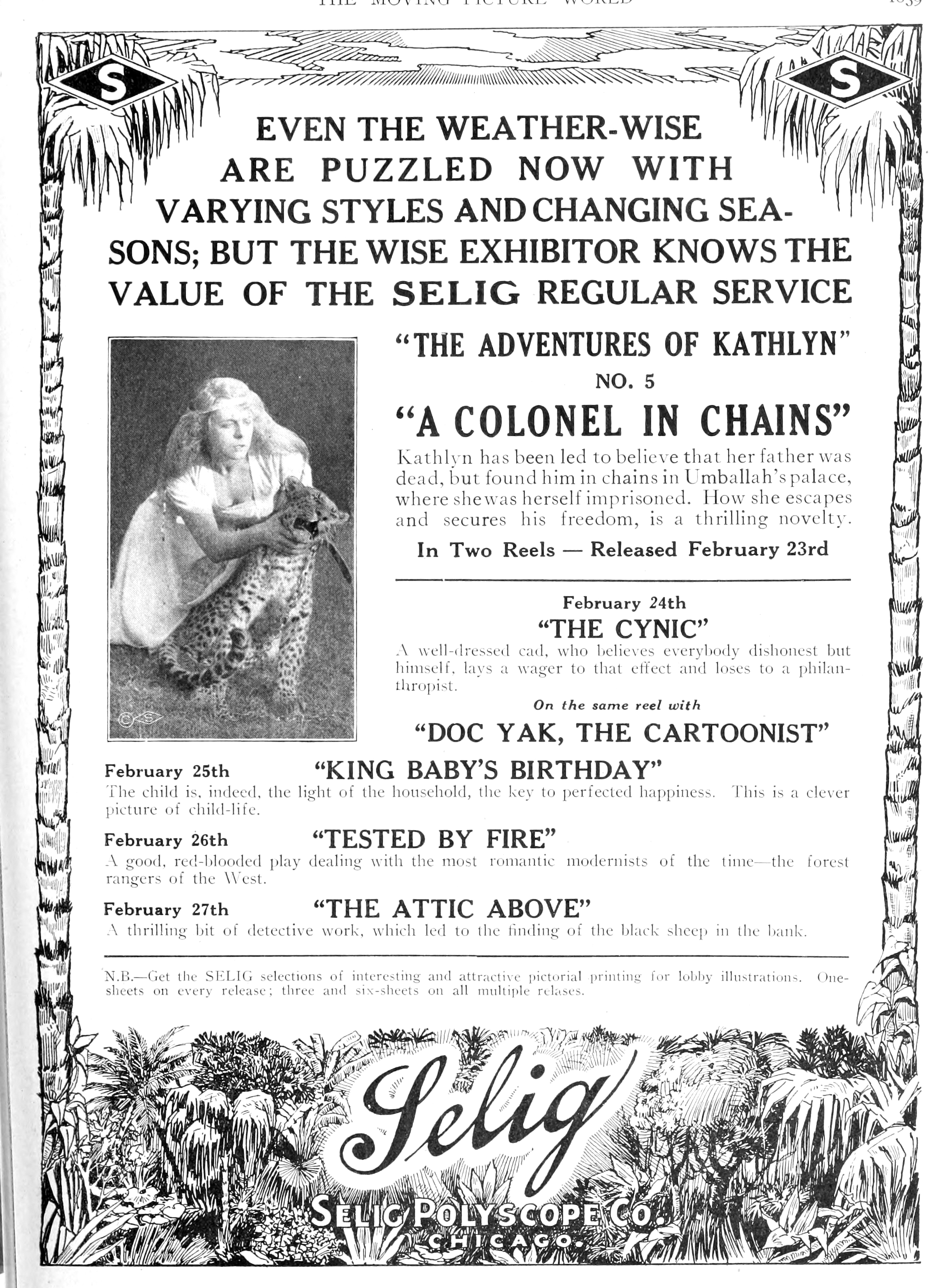