THE BURDICK HOUSE, OR CHICAGO BLOCK

This building is one of the most thoroughly classic and ornate of any in our new Chicago, and has been the admiration of everybody since its completion. It was planned and supervised by T. V. Wadskier, architect, who has several substantial monuments of his skill in his profession in different parts of the city, none, however, reflecting more credit upon his genius than this. The building was erected and is owned by Messrs. Burdick & Mead, the popular lumber merchants, whose offices and extensive yards are on Twenty-second street and Blue Island avenue. These gentlemen have been in the lumber trade here since 1857, and from a small beginning have created and now control a vast business. 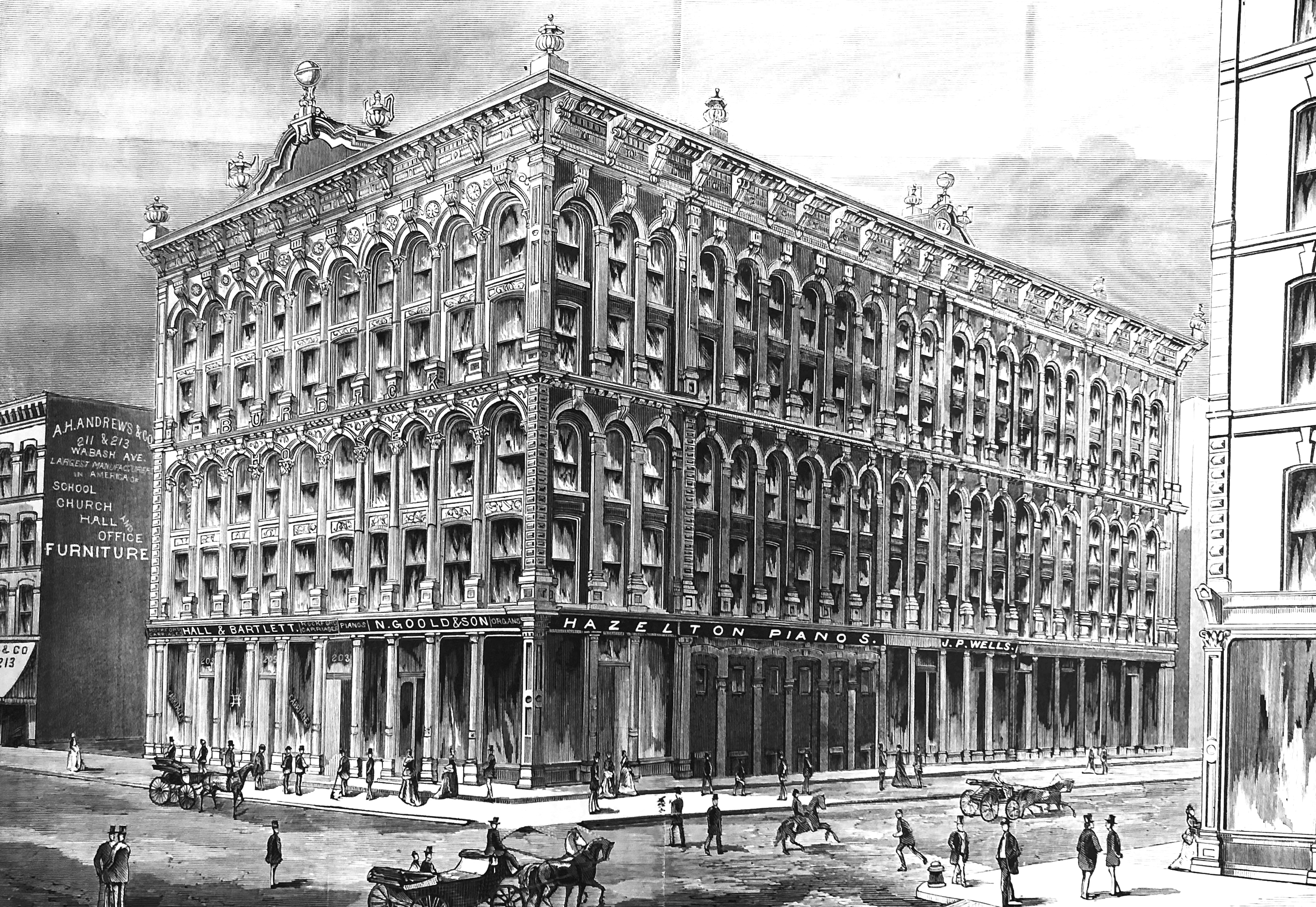 HALL AND BARTLETT.
These celebrated manufacturers of carriages have in this block, at Nos. 203 and 206 Wabash avenue, probably the largest and best-stocked carriage repository in the country. Their manufactory is at Rockford, Ill., and their work has attained a great reputation all over the United States for its durability, shape and style. The Chicago repository is managed by J. A. Dwight, Esq. Their warerooms are entirely supplied from their new manufactory, and contain a most varied stock from elegant landaulets to 100 pound road wagons. 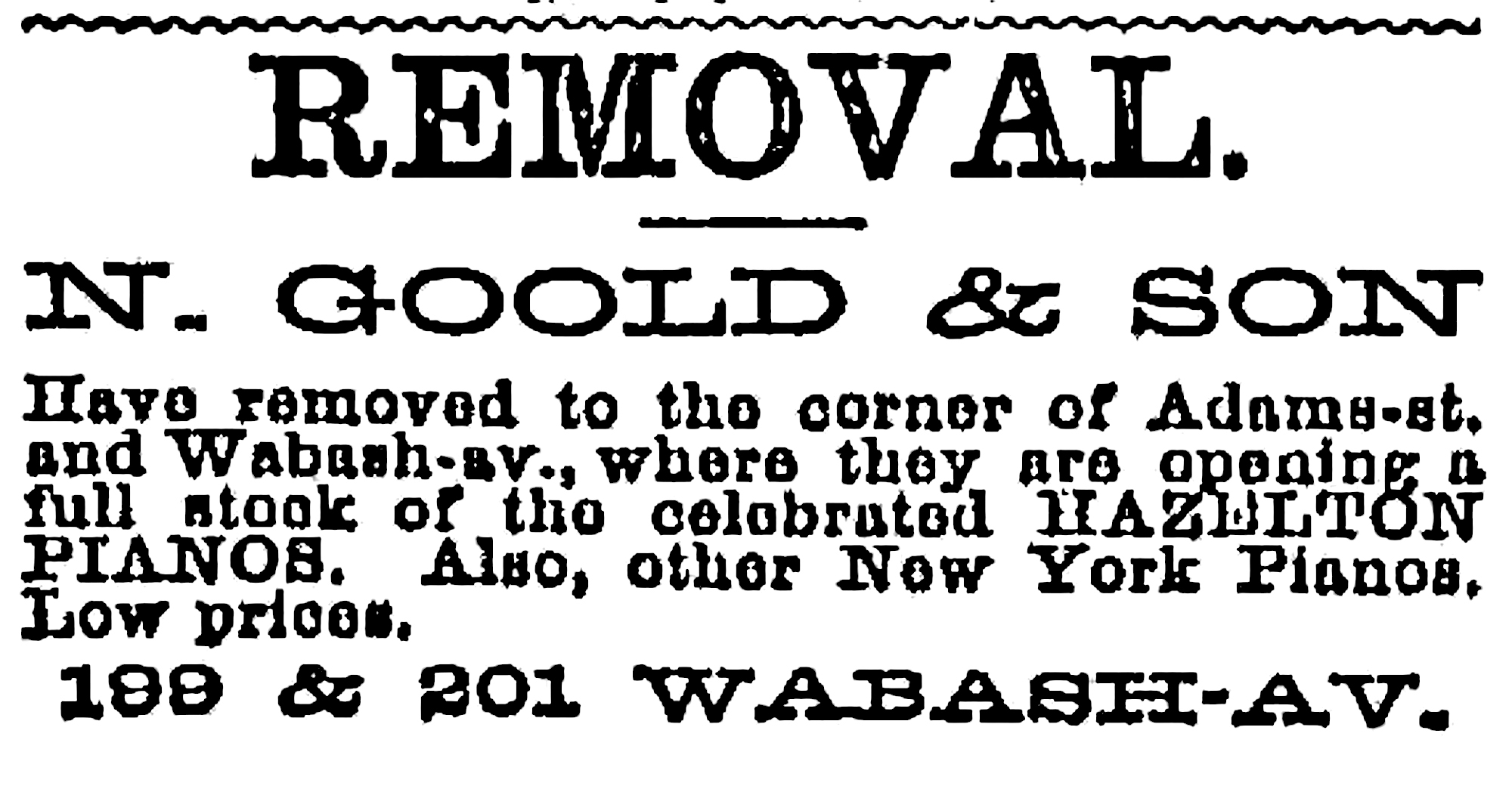 N. GOOLD AND SON, AND THE HAZELTON PIANO.
Our readers will observe in the splendid engraving of the Burdick House that the corner store is occupied by by the firm of N. Goold & Son, then oldest house in their line in Chicago. The senior member of the firm commenced business, in the year 1850, as agent for a leading Boston piano manufacturer, and since that tme have sold nearly all the principal makes of instruments in the United States. About twelve years since they first commenced selling the Hazelton Piano, and from their long experience they have had with them consider that they are fully justified in calling them the best piano manufactured. Of all they have sold, from first to last, not one has failed to give perfect satisfaction, and the reputation of the instrument, based upon real merit, and not upon advertising and purchased recommendations, or premiums at fairs, is constantly increasing. All they ask from any one contemplating purchasing a piano is a fair investigation of the merits of the Hazelton.

They also have a full stock of the N. Goold & Son Piano, which, for a low priced instrument, is unequalled in the market and is fully warranted, and are General North Western Agents for the New England Organ Company’s Organs. Persons in want of anything in the music line will do well to give them a call.

JOHN F. WELLS.
On the Adams-st. side of the Burdick House, this gentleman has a fine billiard hall connected with the hotel, where he always keeps a fine stock of wines, liquors and imported Havana cigars.

THE HOTEL.
The Burdick House is fitted up with all the modern improvements. It has elegant suites of rooms, baths, etc., and accommodations for 200 guests. This is the nearest hotel in the city to the Exposition Building; it is centrally located, and is immediately accessible to the wholesale business houses, railroad depots, places of amusement, and all parts of the city by street cars, and busses, which pass the front door. The terms are $2.50 per day, and Messrs. Munger Bros. are the hosts. 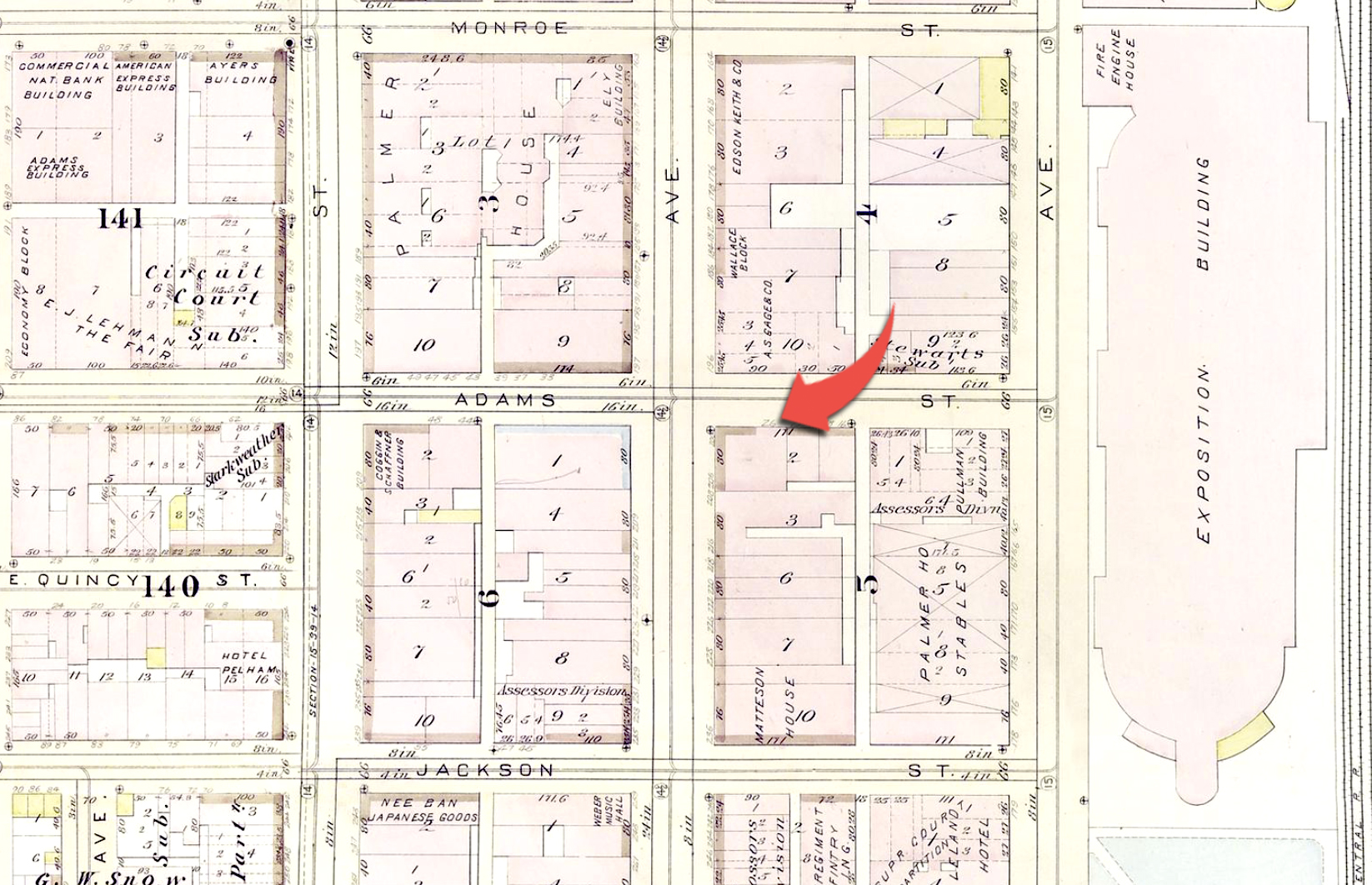