In 1871 John Chrimes, a prominent Chicago tailor (Waterbury & Chrimes), purchased the home of Henry B. Clarke and moved it farther south to 45th Street and Wabash Avenue into what was then the township of Hyde Park.

So it was timely and helpful, from a South Side point of view, that Henry B. Clarke commenced his ten thousand dollar house on the lake shore. The house, so long a landmark is now being removed to give place to a stylish city church, that of St. Paul’s Universalist Society, which is to adorn the east side of Michigan avenue, in the block between Sixteenth and Eighteenth streets. It may be of interest to turn a page or two of the local annals of that day. The great fire has left us not many landmarks, and fewer occupying their original sites, and within a few seasons hence a “spick and span new” city, fresh from the hands of the builders, and with all the varied styles of the army of architects, constitutes the New Chicago, there will little remain to remind us of the past.

OUR REBUILT CHURCHES. ST. PAUL’S.
REV. DR. RYDER.
A city is indeed advancing beyond comprehension, when, in addition to building five square miles of massive mercantile structures and many fine residences, it can spare money and time to erect such church edifices as that of which our artist here presents an engraving. It proves that our bustling, over-crowded city is not entirely given up to mammon, and that in its tremendous efforts to regain and exceed its past grandeur, it does not loose sight of the Church and its refining and civilizing agencies. 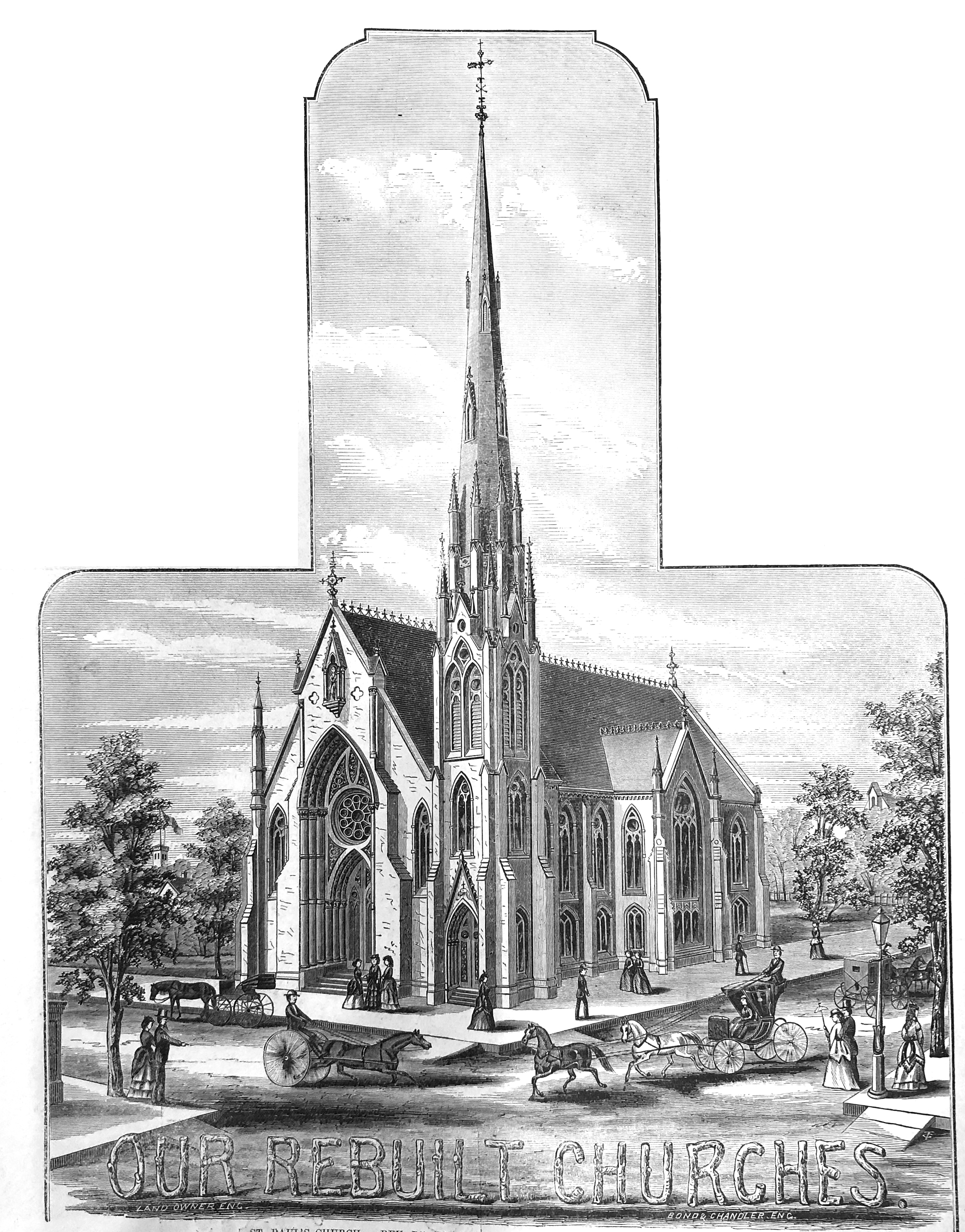 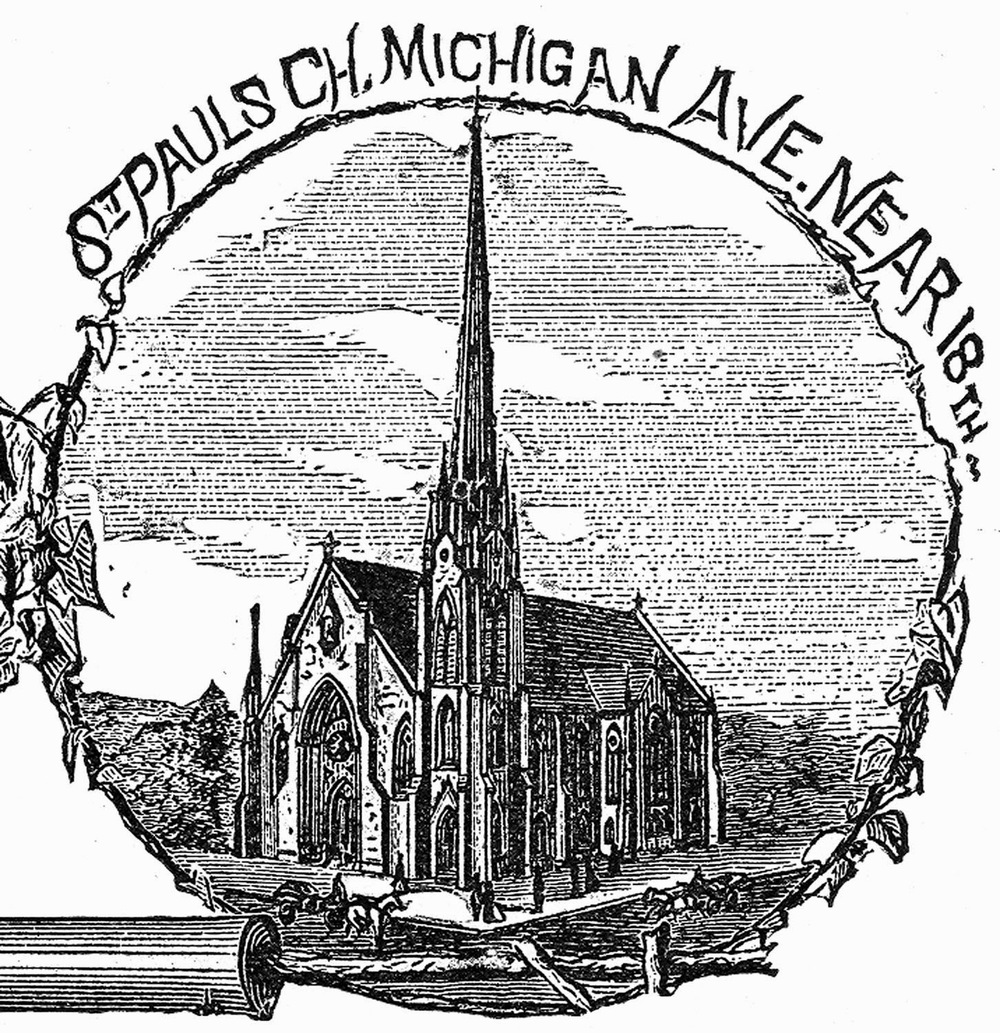 The congregation of St. Paul’s is one of the largest and most intelligent in the city. Their old house of worship fell in the general crash of October 9th, but the people went bravely to work, and our Illustration of their new edifice shows how they have succeeded. The tall spire and the high roofs have something of the Cathedral grandeur about them, and the general design reflects much credit upon its Architects—Messrs. Wheelock & Thomas.

The new edifice will stand on the east side of Michigan Avenue, near 18th street, and is 80 feet front by 125 feet in depth. The basement will contain all the rooms and conveniences for Sabbath school and festival purposes. The main building has the style and finish of French Gothic architecture, the walls being made of Athens limestone, with trimmings of Cincinnati sandstone. The tower at the southeast angle will be surmounted with a tapering, slender, and very lofty spire, terminating at the top with a cross, which is to be 250 feet from the pavement. The main entrance and vestibule will be 20 feet wide. The audience room has a seating capacity of 1,500, a lofty, open-timbered roof, and windows of stained glass. The cost of the building will exceed $100,000.

A most interesting ceremony to the Universalist denomination, in this city and elsewhere, was the formal laying of the corner-stone of the new St. Paul’s Universalist Church, on Michigan avenue, between Sixteenth and Eighteenth streets, yesterday afternoon. The ruins of the old church were barely cold when the new one was thought of, but until a few months ago building operations were not commenced. The drawing of the new edifice in the office of the architects Wheelock & Thomas, is handsome and costly, and we predict that the church wil take a high place for architectural beauty among the stateliest, ecclesiastical structures of the West. 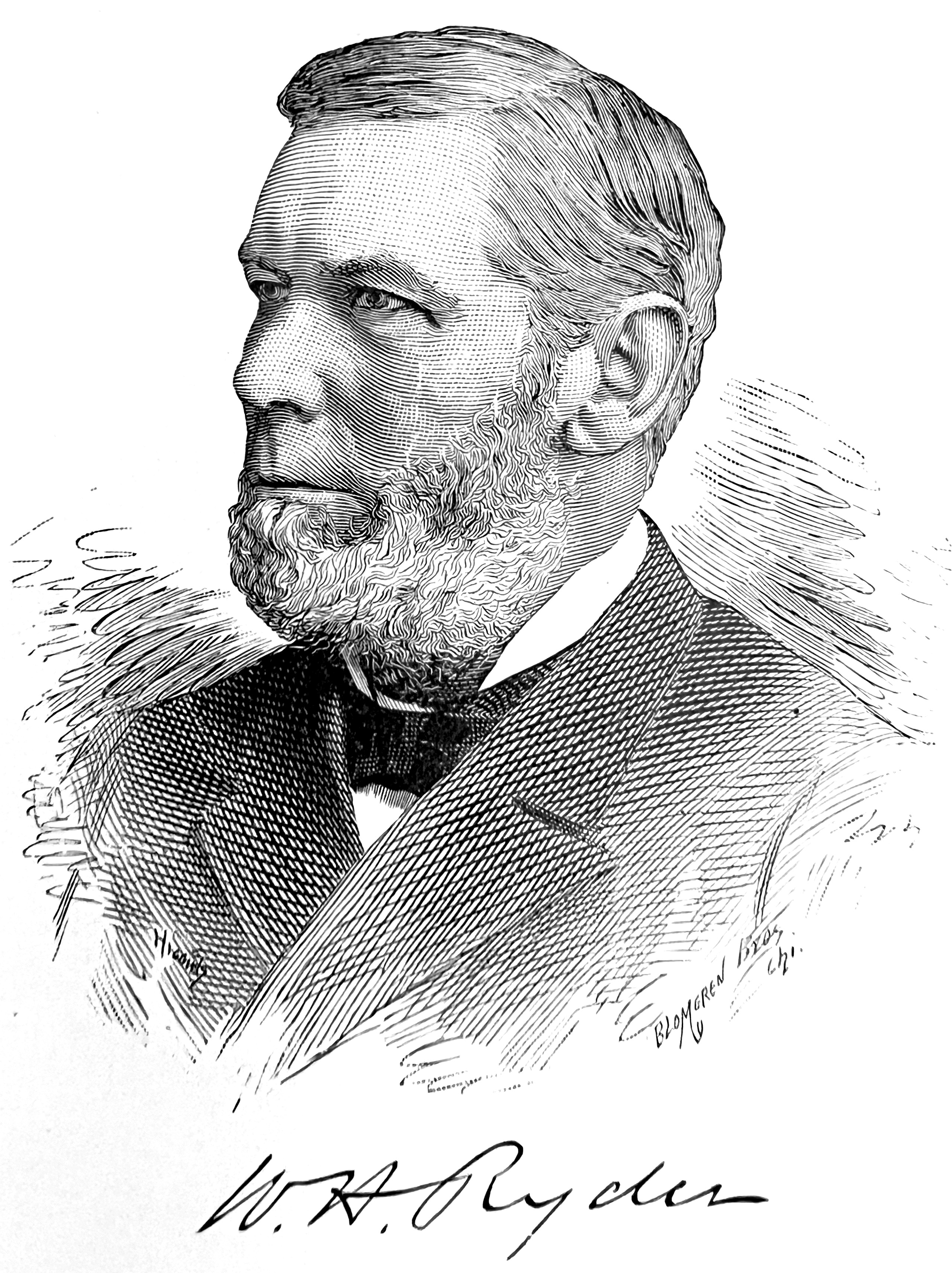 THE UNIVERSALIST CHURCH.
The First Universalist Church, or St. Paul’s Church, before the fire, stood on the corner of Van Buren Street and Wabash Avenue. After the fire, the society removed to Michigan Avenue, between Sixteenth and Eighteenth streets. Here they began to build in 1872, and completed their present house of worship in the summer of 1873. The new edifice is of the modern Gothic style of architecture, in solid stone; it has an auditorium, Sunday-school and lecture-rooms, parlors, and all the modern accessories and conveniences of a church. The spire of the church is not yet completed. The total cost of the church, including lot, organ and furniture, was about $180,000, a somewhat remarkable fact, considering the membership, which at the present time is but five hundred and fifty.

Rev. Dr. W. H. Ryder continued his pastorate until April, 1883, having seen the building enterprise completed and the church dedicated without debt, and the society brought into its present flourishing condition. Dr. Ryder’s resignation was much regretted by his church. He was followed by Rev. Sumner Ellis, who remained for two years. In September, 1884, Mr. Ellis was succeeded by Rev. J. Coleman Adams, of Lynn, Mass.

The members of the First Universalist Society considered a proposition to exchange St. Paul’s Church building for one to be erected by a syndicate on Prairie Avenue near Thirtieth street. 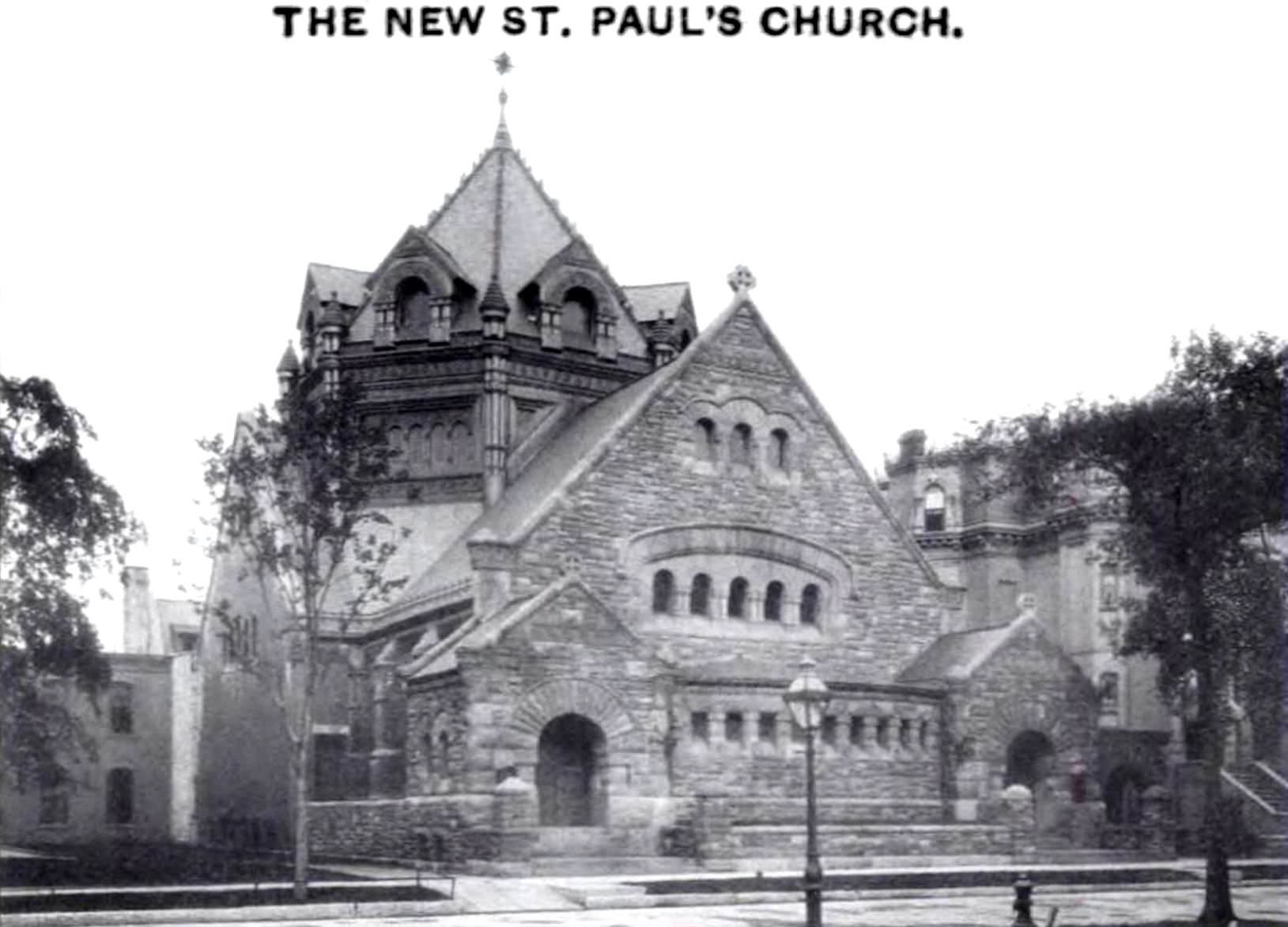 The Laying of Two Corner-Stones.
The corner-stone of St.Paul’s Universalist Church was laid at 4 o’clock yesterday afternoon with appropriate ceremonies. The society is one of the oldest in the city. Before the fire its place of worship was on Van Buren street, and of late years its church has been on Michigan avenue near Sixteenth street. It was thought best to follow the tide of population, and its new church is on Prairie avenue, near Thirtieth street. The new edifice is well under way and gives promise of being handsome, substantial and commodious. It is of stone and brick. The auditorium will seat 750 people, and in the rear are spacious parlors, lecture and Sunday-school rooms, kitchen, etc. The church will be ready for occupancy about Oct. 1, and when completed will have cost about $75,000. In the corner-stone were deposited a silver plate, suitably engraved, a large number of current church publications, several sermons, and statistical and historical material concerning the society, and photographs of Rev. Dr. Ryder, the Rev. Dr. Ellis, and the Rev. J. Coleman Adams, the present pastor. After an invocation hymn by Mrs. H. A. Bingham was sung by the choir. This was followed by Scripture reading and responsive selections. The Rev. Dr. Ryder offered prayer. The stone was then laid and the pastor delivered a brief and appropriate address. After another hymn the benediction was pronounced and the audience dispersed.

The corner-stone of the new synagog of Congregation Ohavey Sholom Mariampol, at the southeast corner of Canal and Liberty streets was laid yesterday afternoon with imposing ceremonies.

Service at St. Paul’s.
The first regular service at the new St. Paul’s Universalist Church, Prairie avenue and Thirtieth street, was held yesterday forenoon. Nearly every seat was occupied. The Rev. William H. Ryder offered prayer, asking Gos’ benediction on the building. The pulpit was rilled by the pastor, the Rev. J. Coleman Adams, and the subject of his discourse was the “Opening the New Church Edifice.” After welcoming the congregation in their new religious home, he traced briefly the evolution of interior church building, explaining that the ancient basilica had fixed the present form of the Christian church. Referring to the noble and lofty lantern of the new structure, he said the congregation had frequently remarked that the latter was to be lighted from above. It was from above that they received all light, the light of a revelation from Heaven.