THE WILLIAMS BUILDING, DEARBORN ST.
This block is one of the finest and most thoroughly constructed of any that grace Dearborn street, the active thoroughfare always so popular with our citizens, and now entirely rebuilt from the river to the new custom-house. It rears its bold front at Nos. 85 and 87, between Washington and Randolph streets, and was erected from the plans and specifications fo Jas. R. Willett, Esq., one of our best architects. It is 61 feet front by 80 feet deep, four stories and basement in height. The top of the cornice is 75 feet from the sidewalk. It is one of the strongest buildings in our New Chicago, and is thoroughly and admirably fitted for offices, in light and dark woods. The facade is of pure Amherst stone, beautifully wrought and fitted, and the architecture is pleasant and agreeable, solid and imposing, without any attempt at gew-gaw display or cheap tawdriness. The iron work was supplied by the Union Foundry Company, successors to N.S. Bouton & Co., and the doors are secured by Sargent & Greenleaf’s locks, with J.F. Woolensak’s patent transom lifters.

The owner of this excellent edifice is Mr. John Williams, an old Board of Trade man, and a well-known and respectable citizen, and one of our heavy capitalists. Mr. Williams began the work shortly after the great fire, and the substantial result is before our readers in the beautiful plate drawn by Mr. Wallis, and of which Mr. Williams may well be proud. There are a few fine suites of offices in the block not yet rented, which parties desiring to located in a convenient spot will do well to examine.

Among the tenants already located in the building we may mention briefly the following:

NORWOOD PARK LAND OFFICE.
The principal office of this rapidly growing and beautiful suburb is here established by Messrs. C.J. Corse & Co., who are disposing of lots to parties desiring homes or investments there. Among our suburbs Norwood Park has had the most remarkable growth. It has good schools, churches, easy accessibility to the city, and the land is offered at a very reasonable figure. The visitor there will find that many substantial improvements have been made during the present season.

M. VAN ALLEN, ESQ.
This gentleman, whim we have had the pleasure of knowing personally for many years, is a real estate dealer of over 20 years of experience in this city, and is consequently well posted in values in all parts of Cook County. He couples a neat and well-arranged office on the ground floor, and makes a specialty of outside property in choice localities, besides doing a general real estate business. His long experience and successful career is a sufficient guarantee to those who may desire to deal with him.

OSCAR LENNON MISCH.
The basement of this building is partially occupied by the gentleman whose name heads this paragraph—Mr. Misch—a late but very energetic and successful accession to the number of Chicago real estate dealers. In March, 1873, Mr. Misch, who had been widely and favorably known in connection with our leading journals and magazines, made his first entree into the real estate market, and since then, his sales have been as numerous as they have been profitable, both to the buyer and seller. Most of his operations extend into the lands surrounding Chicago, especially in the townships of Lyons, Lake, Worth, Palos, and Proviso. He controls large tracts lying contiguous to the new railroads that will soon enter Chicago and greatly enhance the value of the lands near thereto. In this respect Mr. Misch’s list of property offers superior inducement to buyers, while his knowledge of real estate matters in Chicago and her suburbs, constitutes him a safe and reliable judge of values, both of lands and investments.

ULRICH & BOND.
This firm are highly responsible and very extensively known. They conduct a general and heavy real estate and loan business, and are possessed of facilities which enable them to guarantee to capitalists the largest current rate of interest—at present ten per cent per annum, payable semi-annually, free of coat to lender. Their method of doing business commends itself to all in want of first-class investments, and they especially look after the interests of parties holding real estate in Chicago who are non-residents, having made large sales during the present season for owners residing in other cities. Mr. B.A. Ulrich, formerly an attorney, lives at Hyde Park, and is thoroughly familiar with property in that locality. Mr. Wm. A. Bond has made his home in Chicago for some fifteen years, and has a large acquaintance. They are honorable, energetic young men, and make a specialty of Oakland, Kenwood, Hyde Park and acre property.

Sketches are being made by at least three different architects for the remodeling of the Williams Building, 85 and 87 Dearborn street. It is designed to to remodel the whole structure and transform it into a modern office building. It will be ten stories hight, with elevators, marble floors, etc., and the interior will be something after the style of the Illinois National Bank building, with a large light shaft in the centre, and the main entrance nearly level with the street grade. The idea of outside steps for large buildings has virtually been abandoned in this climate by all progressive architects. The proposed remodeling is expected to cost about $75,000. 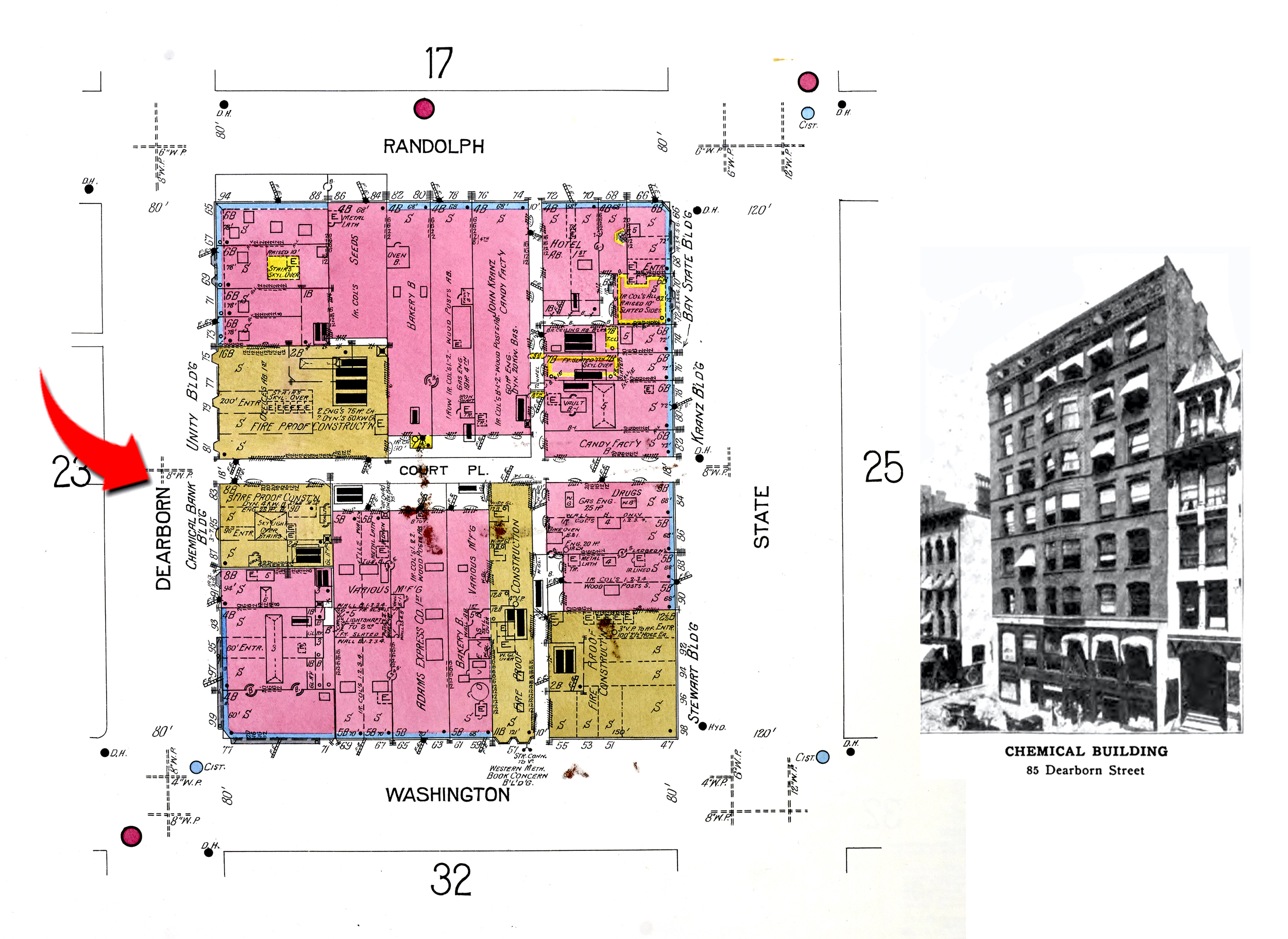 Tenants of the old eight story Chemical building at 117 North Dearborn street have been notified to move and the owner of the building, the Commonwealth Edison company, is to use the property for a substation. Sketches are being made by Holabird and Root for a new structure. Three different developments are being considered, according to an official of the Edison company; one to use the present structure, a second to erect a three story building and the third for am eight story structure. These three plans are to be submitted to Samuel Insull for his selection. In any event the entire building will be used by Edison. The property is 60×80 and is across the alley from the American Bonds and Mortgage building.

Investors in central business property will be given an opportunity to bid on a valuable leasehold Thursday, April 7, when the Chemical Bank building at 85 Dearborn street, and a leasehold interest in 60×80 feet of ground, with nearly eighty years to run, will be offered at auction. The sale is to be made by Roswell B. Mason, master in chancery. in pursuance of a decree of the Circuit court, entered in the proceedings brought by the State Mutual Assurance company of Worcester, Mass., against the Abstract Safety Vault company.

The property is to be sold comprises a leasehold interest in at $12,000 a year for the balance of the term.

The land is owned by Mrs. Mary B. Williams and others and was valued at $217,360 by the board of review. The sale will be made at the rooms of the Chicago real estate board. 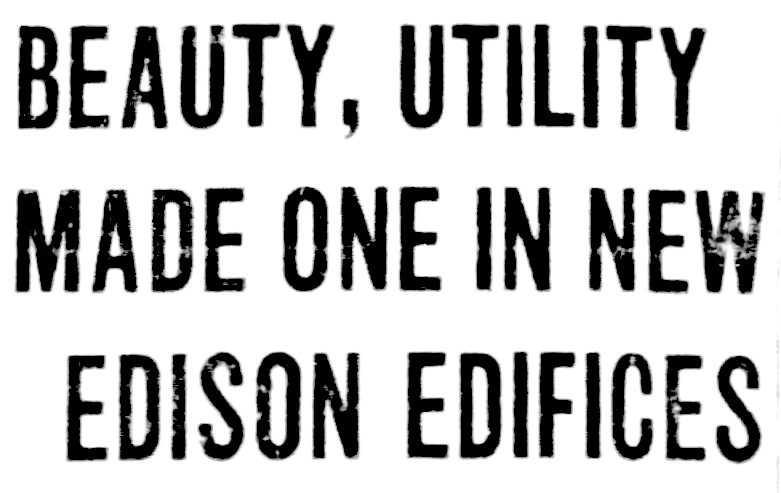 BY PHILIP HAMPSON.
Once again the Commonwealth Edison company demonstrates the feasibility of making beauty one with utility in a strictly industrial building through two structures which it will erect immediately. One of the buildings is a three story substation to be erected at 121 North Dearborn street. The other is a service station to cover a large site at the northwest corner of California avenue and Addison street.

And besides helping the cause of a better looking Chicago, these buildings will fit in with President Hoover’s construction policy, for the Dearborn street structure will cost $350,000 and that on Addison, $1,000,000. a total of $1,350,000. Holabird & Root designed both buildings.

Lines to Be Simple.
Taking the Dearborn street edifice first, we find that it’s to be faced with huge slabs of Indiana limestone resting on a base of Egyptian black granite. It will be characterized by the simple vertical lines of of modern architecture. A little ornamentation will be found in bronze doors, window frames, and grills, and some sculptural work above the door and at the upper corners of the building.

The substation will front 46 feet 5 inches, with a depth of 80 feet. A future extension of 46 feet is planned for the south. Foundations are being installed capable of carrying an additional seven stories. There will be three basements, extending 40 feet below the sidewalk. Technical equipment for a substation will be installed on the various floors, which will be served by a fast freight elevator and a thirty-five ton winch for bringing in heavy machinery.

Holabird & Root designed the above structure—a substation to be erected at 121 North Dearborn street at a cost of $350,000 for the Commonwealth Edison company. It will be three stories high for the present but will have foundations capable of carrying seven more floors. Gilbert Hall is the delineator.

The “Spirit of Electricity” sculpture on the right was designed by Sylvia Shaw Judson.