WILLIAM BLAIR & CO.’S NEW BUILDING.
This fine new building in our Rebuilt Chicago marks the steady progress of our mercantile interests. It is located at Nos. 172, 174 and 176 Lake streets, between Lasalle street and Fifth avenue, and has just been completed from the plans of Messrs. Burling, Adler & Co., architects. It presents a most massive and solid appearance, the front being constructed of St. Louis pressed brick with heavy brown stone trimmings. It is five stories high, 60 by 144 feet, with deep basement, 60 by 166 feet. It is well lighted throughout, and has steam elevators, as well as the most approved steam heating apparatus. 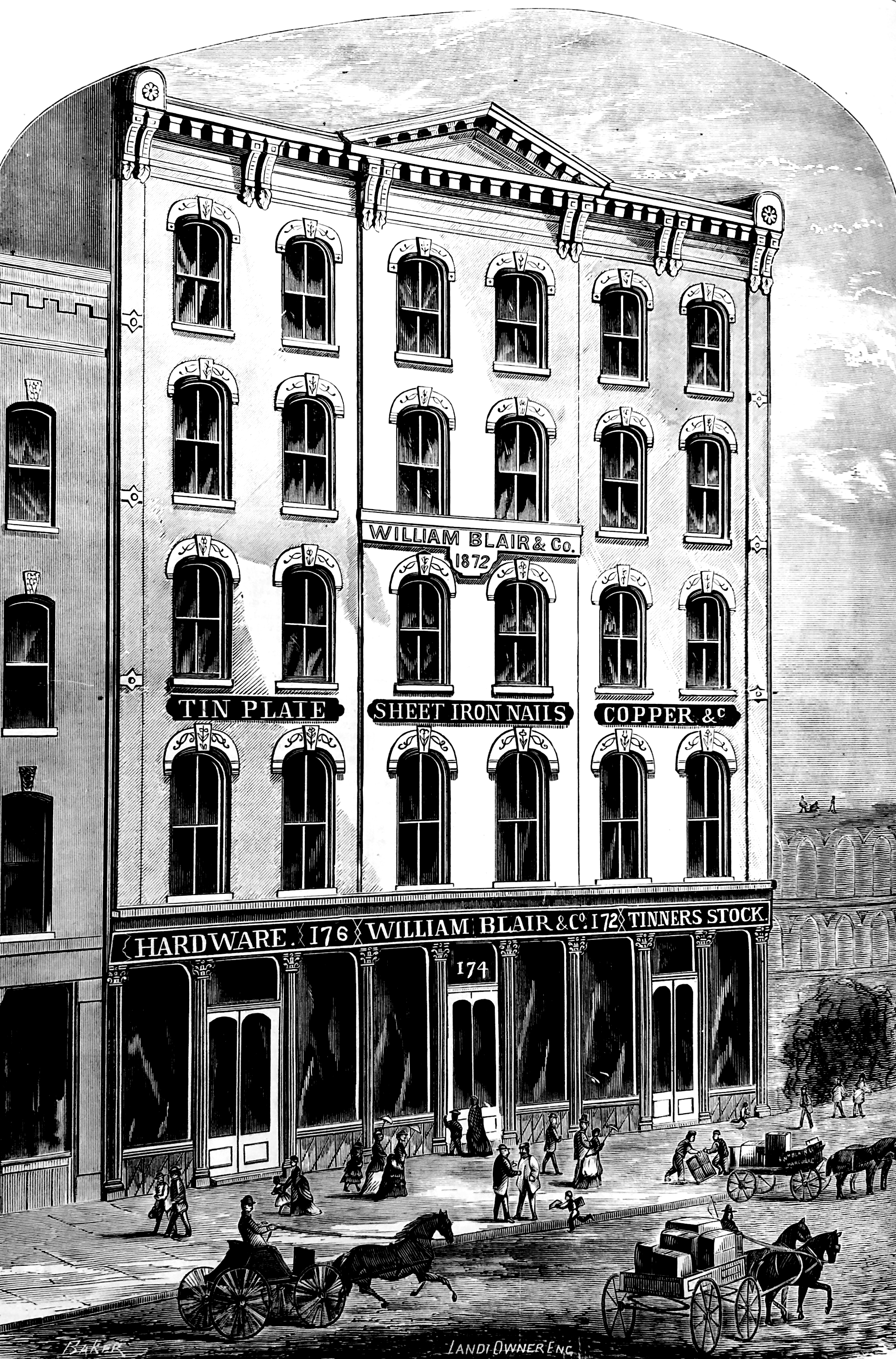 This fine structure will have been taken possession of before The Land Owner reaches our readers this month, by its owners, Messrs. William Blair & Co., as warehouse and salesrooms for the transition of their large wholesale trade in general hardware, cutlery, tin plate, and tinners’ stock. The building has been erected with especial reference to this business, and is in every respect one of the most complete for its uses to be found in the country. The basement contains the stock of tin plates, sheet iron, nails, copper and other heavy goods, and is accessible both by steam elevator and two inclined planes of easy grade for hand trucks. The first floor is devoted to cutlery, and the most valuable portion of the stock of shelf hardware. The principal office is on this floor, also the receiving, packing and shipping departments. Thee are two fire-proof vaults—one on this floor, and one in the basement. On the second floor is one of the finest sample rooms to be seen anywhere in this country, and reached by an elegant stairway of black walnut and ash. It is 60 by 75 feet, and finished with walnut and ash floor, cornices, show-cases, etc., and is designed to contain samples of every variety of goods kept by the house, and is so arranged as to facilitate purchases in person, and to avoid noise and confusion. On this floor also is kept the stock of stamped and japanned tinware, tinners’ tools, etc. On the third floor is kept the heavier grades of shelf goods, and duplicate stock of hardware in packages; and on the fourth and fifth floors are the stocks of iron wire, agricultural implements, etc., the whole stock being very heavy in all the different departments.

Messrs. William Blair & Co. are the oldest house in their line in Chicago, and with the business facilities afforded by their new building and their well known advantages in the purchase of goods, they are fully prepared to maintain the leading position held by them in the trade for many years, and to take care of their rapidly increasing business. The firm is composed of William Blair, C. B. Nelson and James M. Horton.

It is indeed gratifying for us to be able to give such evidences of complete recovery from the great fire, as our leading merchants show in their fine new buildings and enormous stocks of goods, in almost every line. The house of William Blair & Co. are fully able to sustain the high character this market has long enjoyed in their particular line. With an unblemished record extending back over a period of thirty years, which not even the terrible events of October 9th last could taqrnish, it is with pleasure that we see this firm again located in a building commensurate to their needs, and speeding on in the transaction of an extensive business. Our non-resident citizens will find a half-hour in examining this large establishment well spent, and especially so if they are in search of any goods in this line.

William Blair was born in Homer, Cortland County, N.Y., May 20, 1818. His father, Samuel Blair, and his mother, Hannah, were both natives of Blandford, Mass., his mother being the youngest daughter of Jonathan Frary, who was of English origin. On the paternal side, Mr. Blair is of Scottish descent. At the age of 14 he entered the employ and became a member of the family of Oren North, a hardware merchant of Cortland. In 1836 Mr. North decided upon removing his business to Joliet, Ill., and in July of that year he sent young Blair forward to the place, giving him letters of introduction to Martin H. Demmond, and others. The financial troubles of 1837, however, deterred Mr. North from coming West himself, and he determined to close out his Western branch. Mr. Blair, aided by his two brothers, Chauncey and Lyman, then located at Michigan City, bought the stock of Mr. North, and continued the business at Joliet until 1842. He came to Chicago and established his house here. Mr. Blair was married June 21, 1854, to Miss Sarah M. Seymour, daughter of John Seymour, of Lima, Ohio. They had two children. William Seymour Blair, who died at the age of 6 years, and Edward Tyler Blair, who graduated at Yale College in 1879, and is now a valued and trusted member of the firm.

Mr. Blair was seen at the office of the firm, and in reply to the question of his proposed retirement said: “There is something in it, but as the plans are not completed yet, I would much prefer to say nothing about it.”

“Have you made up your mind to retire from the business?”

“Possibly I have, but if by any change the plans were not perfected I should continue in the firm.”

“Are you contemplating the admission of some of your old employes to the firm?”

“Yes, if all goes well. But there are other partners in the business who will remain, and their wishes in the matter must be considered. We have a number of trusted employes who have been with us many years.”

“Will the new concern be a stock company?”

“Yes, I believe that is the idea. But I would rather not say anything about it just at present.”

“Will there be any new members of the firm from outside?”

“Yes and it is mainly in their interest that I prefer to say nothing until the proposed change is an accomplished fact. I do not think that matters will be arranged until within a few days of the first of the year. When they are completed, I shall be pleased to tell you all about it.”

“The style of your firm is the oldest in the city is it not?” 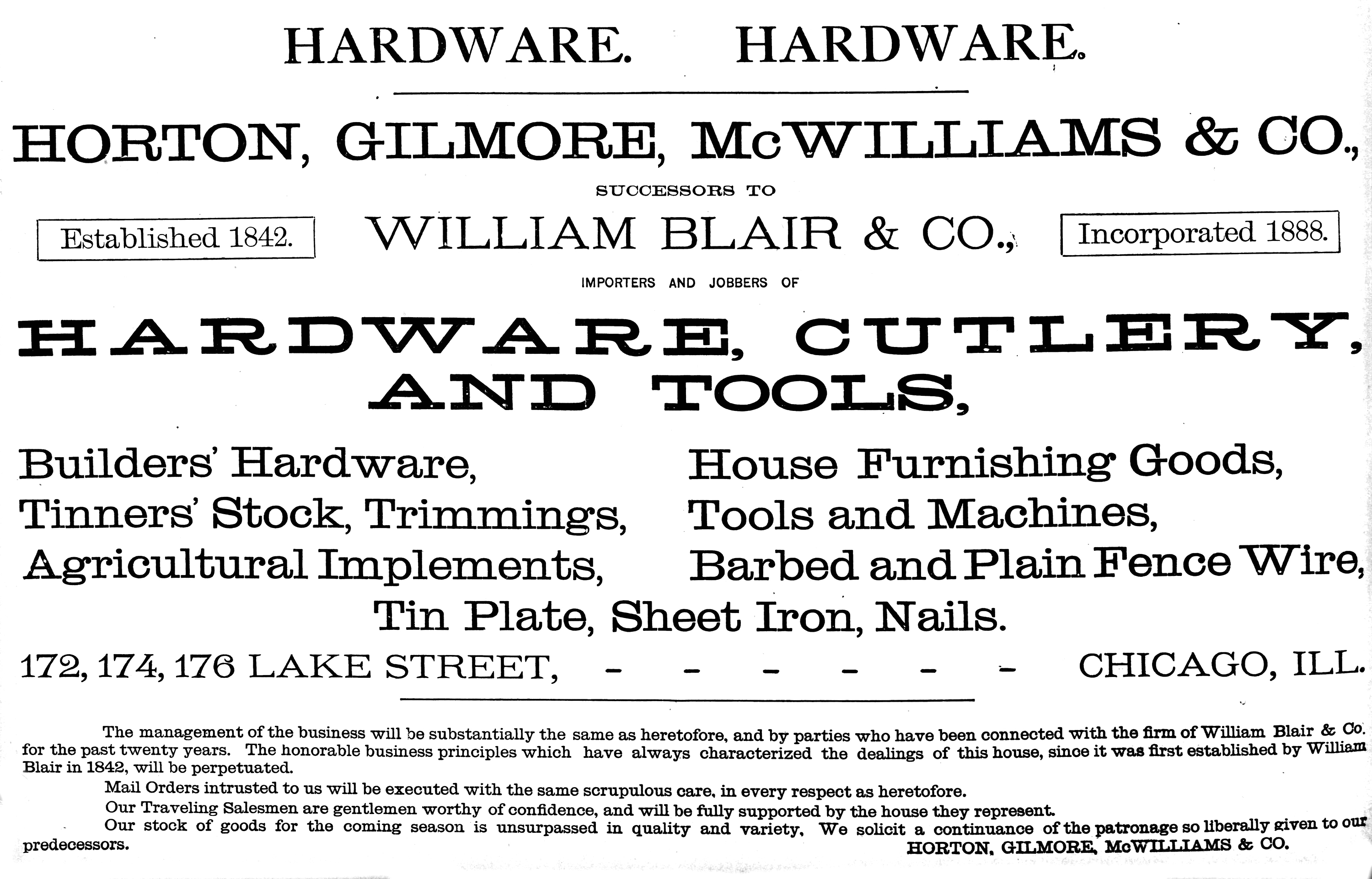 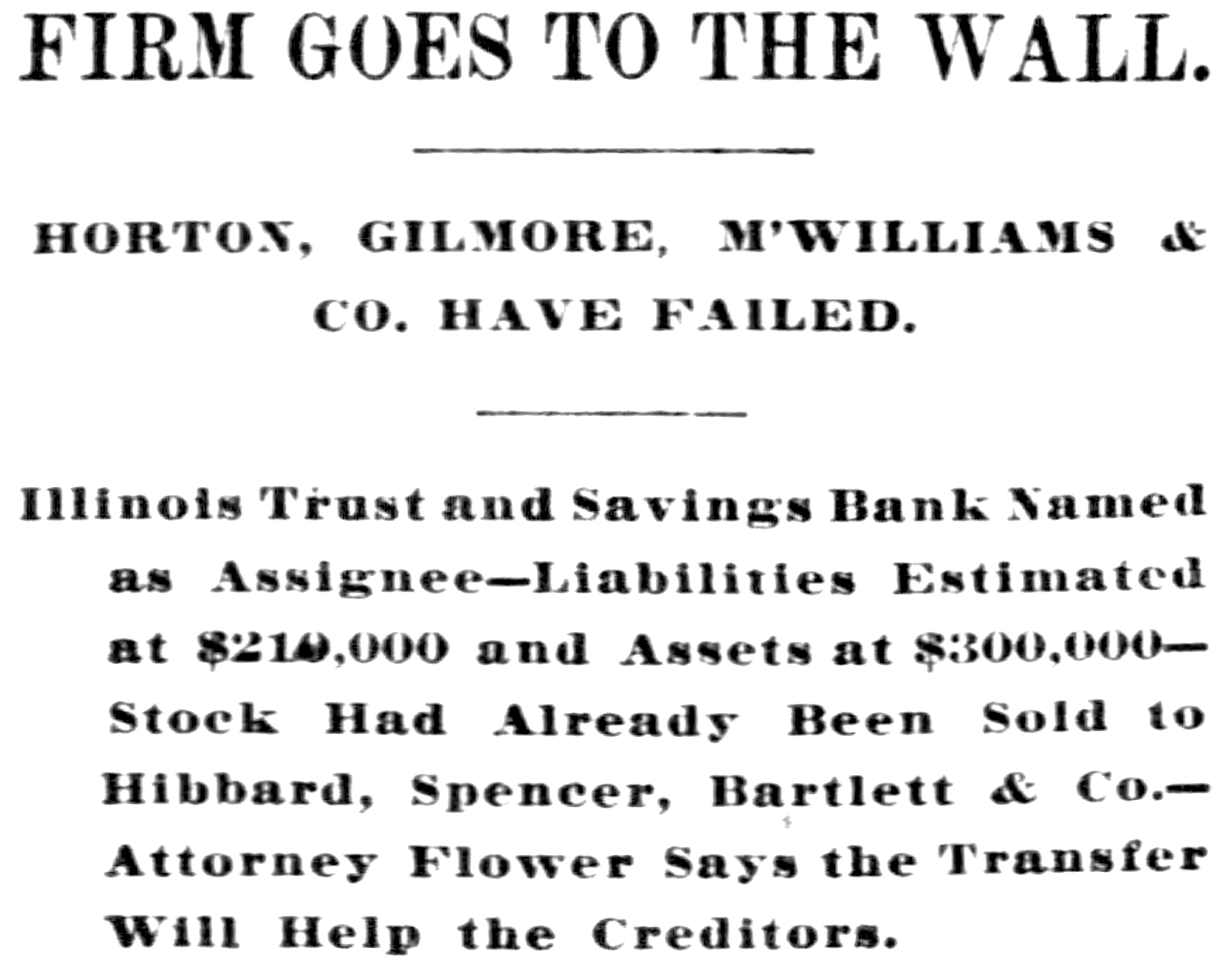 After an existence of twelve years as one of the largest wholesale hardware houses in the West, the firm of Horton, Gilmore, McWilliams & Co. yesterday passed into the hands of the Illinois Trust and Savings Bank as assignee. The statement filed in the County Court estimated the liabilities at $210,000 and the assets at $300,000. The latter consists of $150,000 in outstanding accounts and the sum received from the sale on Monday to Hibbard, Spencer, Bartlett & Co., of the company’s stock. The purchase price is 75 cents on the dollar, according to the inventory now being taken, and to be completed not later than Jan. 20, which is expected to realize at least $125,000.

This action, it is said, was taken because the members of the firm preferred to dispose of the stock under their personal supervision, thinking it would realize more than if sold through an assignee.

The entire stock of the corporation has been sold to Hibbard, Spencer, Bartlett & Co. and the property delivered. The sale was made on Monday and the proceeds will be turned over to the assignee as soon as the inventory has been completed. By this action the creditors will be directly benefitted, as by a direct sale to a wholesale house a better price was obtained for the stock than could have been obtained by any assignee. The corporation expects to pay 100 cents on the dollar in the course of the administration of the estate. Ever since the late panic the house has been losing business and the obligations have reached that point where they could not be taken care of as they matured. In order to prevent any preferences and the possible waste of the estate the present action was decided upon.

Doors of the Concern Closed.
As soon as the assignment was made in the County Clerk the doors of the concern were closed, and a custodian was placed at the front entrance who refused admittance to all visitors. Customers of the concern who desired to make purchases were referred to the house of Hibbard, Spencer, Bartlett & Co., while large signs had been previously placed in the windows announcing the sale of the stock to that concern.

The encroachment into the hardware business by concerns engaged in other lines affected the general hardware trade to a large extent lately, and the insolvent concern suffered from the cause. For twelve years the corporation has been in business in Lake street, in its present location, and it probably had the largest city trade of any of the wholesale hardware houses in business here. It was the successor of the old firm of William Blair & Co., one of the pioneers in the hardware business in Chicago. With the assignment the firm ceased business permanently, and it was announced that it would not resume.

Two extra alarm fires kept more than one-third of the city’s firemen busy yesterday and last night and caused property damage estimated at $175,000. The first fire was in a five story building occupied by the Geiser Office Furniture company at 166 West Lake street, the second in the old Gambrinus brewery at Albany avenue and Filimore street.

The downtown fire, in the early morning, delayed 250,000 persons on their way to work in the loop. Elevated traffic was tied up. The flames partly damaged a building at 164 West Lake street and for a time menaced the Builders’ building, 228 North La Salle street. Ten fire companies worked eight hours on the fire, described by Commissioner Corrigan as the worst downtown area conflagration in nearly 20 years. He estimated the loss at $150,000. 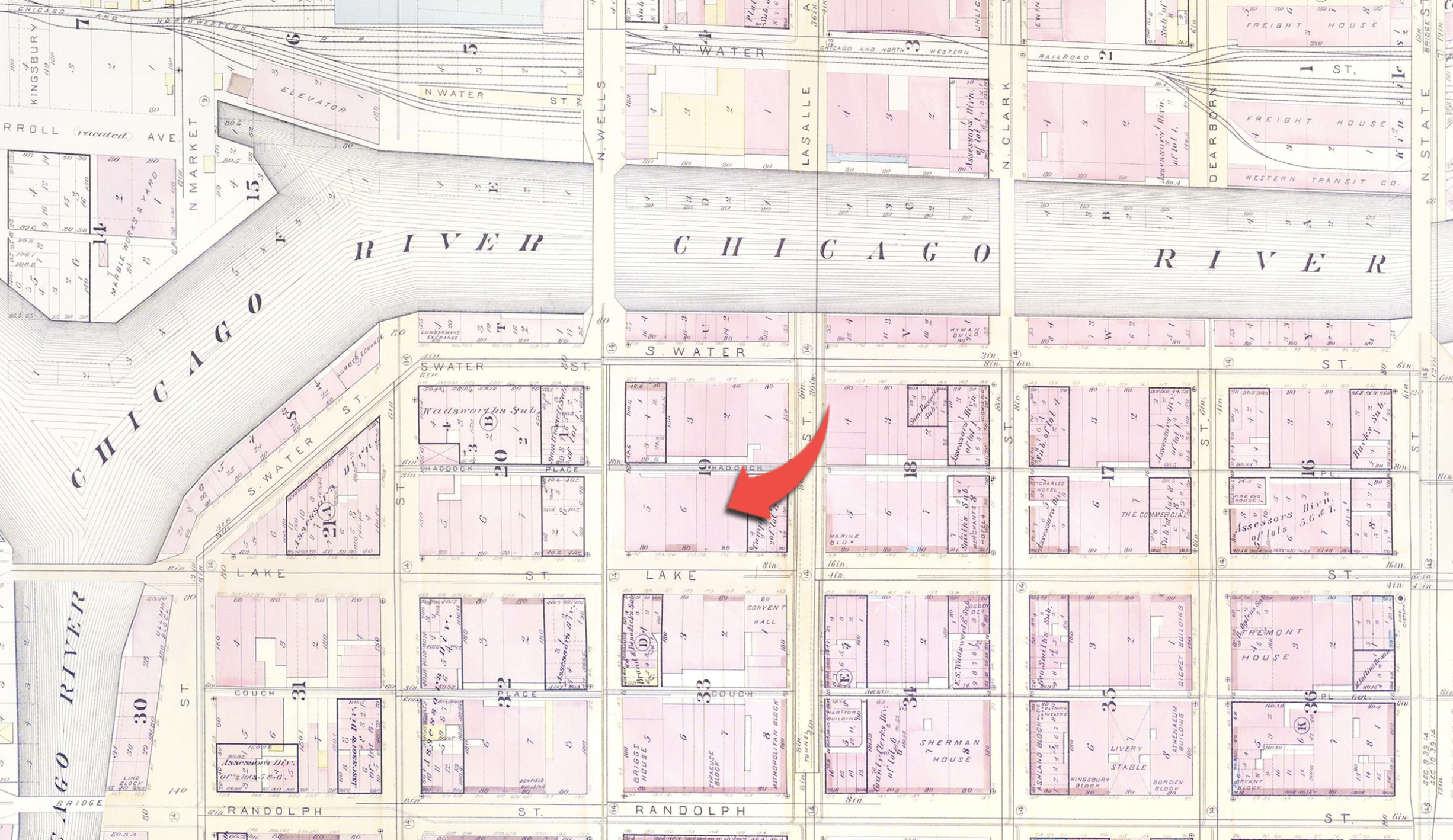