Chicago Cottage started in the fall of 1879 as the Wolfinger Organ Co. by F.R. Wolfinger, president, John A. Comstock, secretary, and Herman D. Cable, treasurer.

The company was originally located in a two-story building at Randolph & Ann Streets. 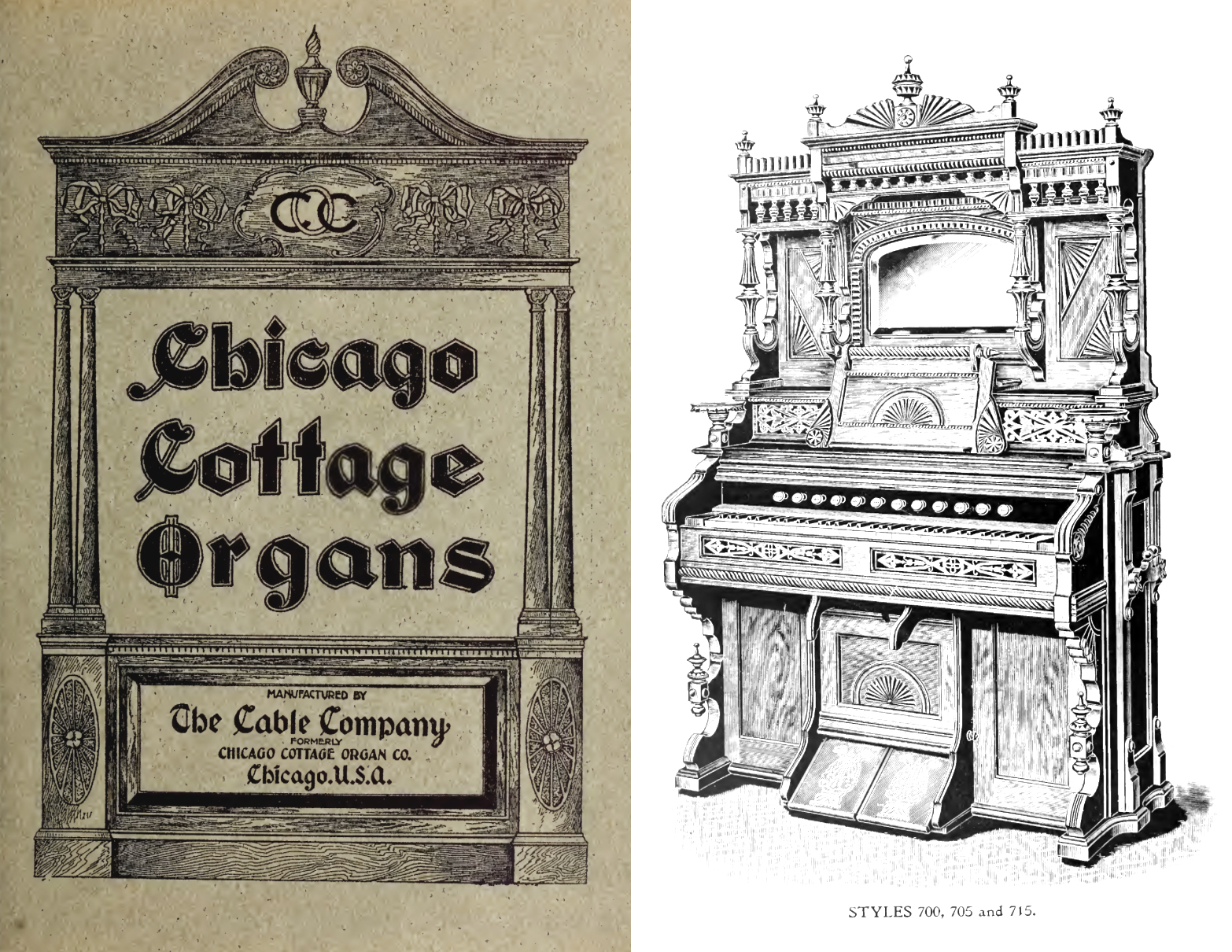 A Comprehensive History of the Development of the Piano by Alfred Dolge, 1911

H. D. Cable, born at Walton, N.Y., in 1849, spent his early days on a farm. After attending Walton Academy, he turned to teaching, with such success that at the age of 17 he was elected principal of the schools at Easton, Pa., and a year later appointed superintendent of schools at Williamsport, Pa. In 1869 the publishing house of Barnes & Company sent him to Chicago as manager if their western department, and for 11 years Cable filled that responsible position with great success and fidelity. In 1880 he formed a partnership with the organ builder, F. R. Wolfinger, organizing the Wolfinger Organ Company, which was changed to the Western Cottage Organ Company, and later on to the Chicago Cottage Organ Company. He died prematurely on Martch 2, 1899, at the age of 50.

The business, having been incorporated, has been continued, but the name of the company was changed to the Cable Company, in honor of the founder. F. S. Cable served as president until 1903, when he started in business on his own account. He was succeeded by F. S. Shaw, under whose able management the company largely extended its activities, adding a department for player pianos, and paying careful attention to the development og the artistic Conover piano, preparing for the introduction of the same on the concert platform. In the short space of 20 years the Cable Company has attained a position as one of the great leaders of the western continent, and the genius of H. H. Cable has shown in contemporaries the great responsibilities of the piano business in its legitimate channels.

The Cable Piano Co. was established in 1880 by H.D. Cable. H.D. Cable was originally with the Wolfinger Organ Co., which later changed to the Western Cottage Organ Co. and then to the Chicago Cottage Organ Co. In 1890, H.D. Cable consolidated with Conover Bros. and his two brothers, Fayette S. and Hobart M. Cable (although Fayette S. and Hobart M. Cable continued building pianos under their own brand names). Cable and Conover then acquired the Schiller Piano Co. of Oregon, IL , and used the Schiller pianos as their higher end models. By the 1900s, Cable had two factories in Illinois (Chicago and St. Charles) and manufactured pianos under the names: Conover, Cable, DeKoven, Kingsbury, Midget, Puritan, Wellington, Schiller; also made Euphona, Carola and Inner-Player player pianos. “Tonarch” and “Crownstay” were trademarks of the Cable Piano Co. (involving soundboard patents). Other owners of the firm included Jackson & Wabash of Chicago; Winter & Co. and ultimately, the Aeolian Corp. of New York until about 1982. Pianos were manufactured in Memphis, TN during Aeolian’s ownership. In 2001, GibsonGuitars acquired the Cable name when they purchased Baldwin. 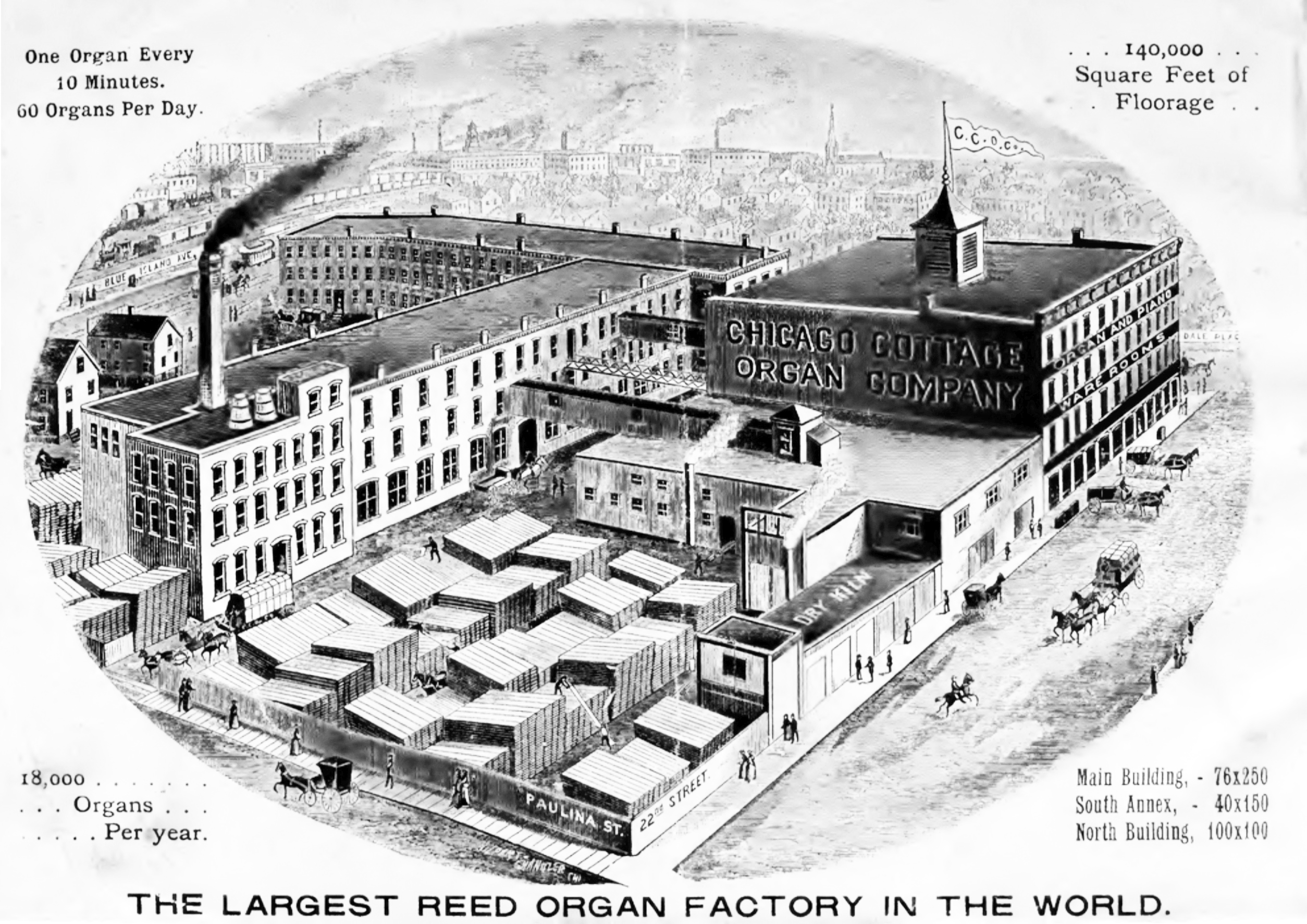