OUR HOME MANUFACTURES.—THE CHICAGO PLOW COMPANY, THEIR WORK AND PRODUCT.
As stated in our last issue of this newspaper, Chicago is rapidly becoming as important a point in manufacturing, as she has been in commerce and trade. We have given from month to month pictorial evidence of this steady progress.

Elsewhere (below) we present fine illustration of the works of the Chicago Plow Company, as well as of their product itself.

ORIGIN OF THE WORKS.
This company was organized as a corporation at Naperville, Ill., in 1870, under the name of the Naperville Agricultural Works. The corporation succeeded the old firm of Bouton, Whitehead & Co. The business of plow making has been carried on in a small way in the town of Naperville since 1833. The first plows made in the West were made there, and the first improvement over the old wooden mould brand plow, the adaption of wrought iron and steel, was there introduced. Plow-making was long the occupation of the Naperville blacksmiths, and their goods had attained a large and favorable sectional reputation. Mr. N. S. Bouton, of Chicago, in 1868, became interested in the business with a view of extending the trade in the rapidly developing North-West, and soon the goods offered to the farming public, assuming the position which those conversant with their excellent previous reputation erected of them. 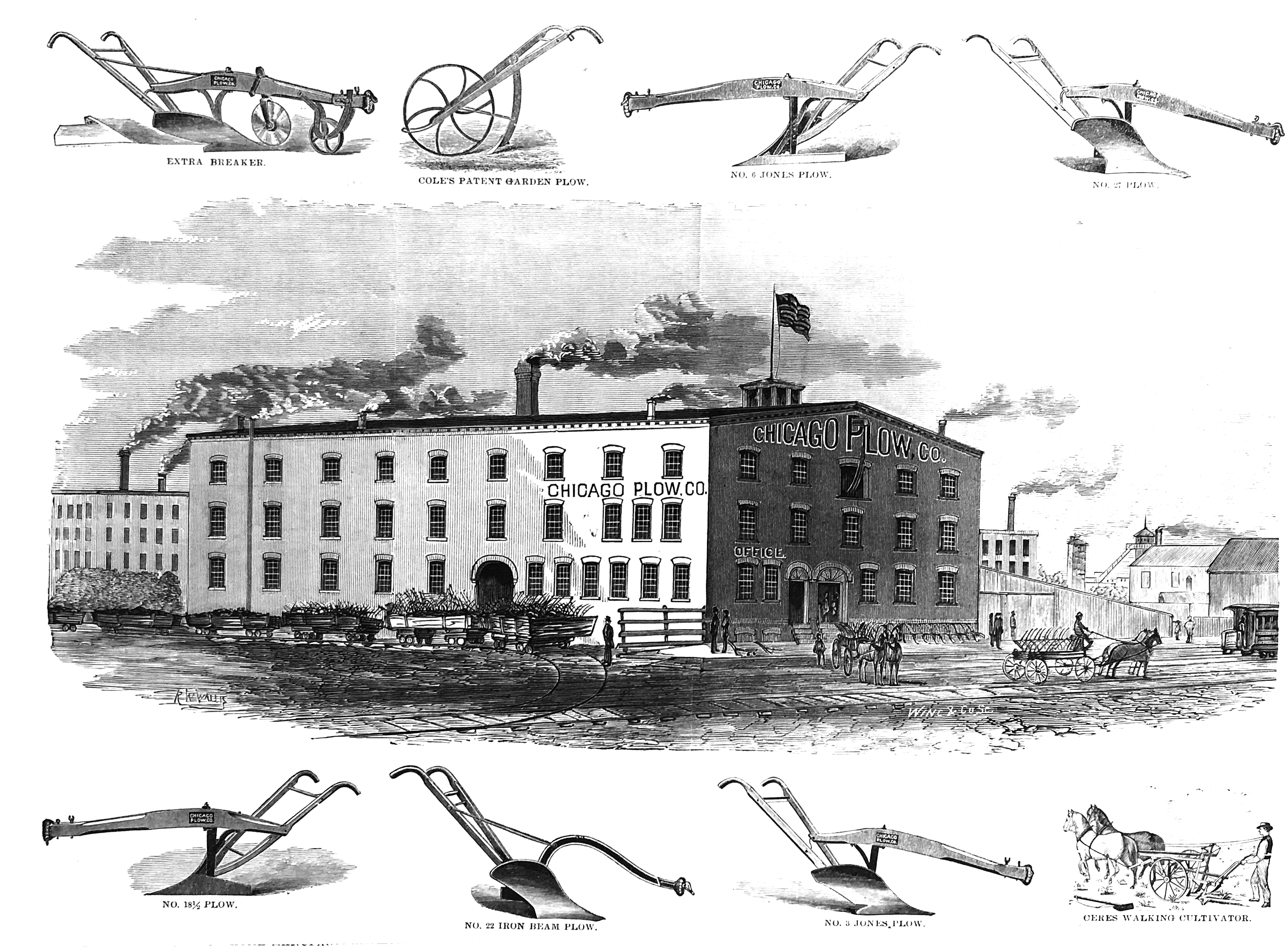 The Works of the Chicago Plow Company, Cor. Archer Ave and Wallace Street.

RAPID GROWTH OF THE BUSINESS.
The rapid extension of the business which in amount places the company in the front of the plow-makers of the West, can only be attributed to the excellence of the goods offered to the public. Their plow took the first premium at the late Iowa State Fair, in 1872, for lightness of draft, and good working qualities. They were also victorious over all others at the great State plowing match, at Knoxville, Tenn., in 1871, besides carrying victory before them at many other fairs all over the West.

CHANGED TO CHICAGO.
From their rapid growth, they found themselves compelled to find other quarters, and consequently, last fall, they decided to change their location to Chicago. They purchased their present eligible location at the corner of Archer ave. and Wallace st.,
where they have erected buildings which have been pronounced by experts the best adapted to the work required of any similar establishment of the kind in the country. They occupy with their building, drying sheds, stables, etc., 250 x 150 feet, and have side-tracks and excellent shipping facilkities.

THE VARIOUS DEPARTMENTS.
The size of their various departments are as follows:

The blacksmith shop, where the various parts of the plows are made, is 40 x 130 feet. Thence the parts of the plows are carried to the fitting and machine shop, which is 35 by 50 feet; thence they go to the grinding room, 40 x 85 feet, and thence to the polishing room, 40 x 85 feet. Their wood department is well provided with the machinery necessary for the business. The room occupied by this machinery is 21 x 80 feet, made fire-proof and so arranged that it can be entirely cut off from the rest of the building in case of fire. In this room the wood is all worked to shape whence it goes to the wooding-room and is fitted to the plow with the exactness and finish of fine cabinet work. The engine is 100-horse power, supplied with steam by two large boilers. Outside of their main building are their extensive drying sheds; an enormous stock of lumber seasoning, by which means they are enabled to put into their goods the best and toughest timber.

OFFICES AND STORE ROOMS.
The company have a commodious office, large store rooms, and everything necessary to the transaction of their large business. Their trade is co-extensive with the great West, and like constantly increasing. Their plows are sold from old Mexico to Oregon on the Pacific coasts, and shipments have been made to Nova Scotia.

A FORECAST.
When Chicago shall have become the great manufacturing city she is destined to during this century, with her already established pre-eminence in commerce, she will then in fact be the great city of the continent. It is the establishment of such great industries as the Chicago Plow Works that gives us the key to what is yet to come in this importmant field.

You notice bankruptcy proceedings begun yesterday vs. “Nathanial S. Boulton, proprietor of Chicago Plow Company, 292 Archer avenue.” This statement is erroneous, and injurious to the Chicago Plow Manufacturing Company, doing business at the same location. Mr. Bouton’s affairs are entirely separate from those of this company, and we are in no way connected with or effected by the proceedings noticed. Will you please insert this note in explanation?

The alarm box from Box 13 at 9:56 last evening was caused by a fire in the three-story brick building at the southwest corner of Wallace street and Archer avenue. When the flames were first seen by the watchman of an adjacent packing-house, they seemed to be bursting from every window and means of egress. The first alarm was bay a “still” to engine No. 21. Eight minutes later a second alarm was sounded, as the fire had gained such headway that it was found necessary to confine the efforts of the Department to keeping the flames within limit and saving the surrounding buildings, which were small frame structures.

The building was occupied by the Archer Starch Refinery, manufacturers of starch, glucose, and grape sugar, and had a frontage of about eighty feet on Wallace street. At the southwest corner is the engine-room, by the side iof which there were two large wooden vats. The fire started from the ignition of a barrel of kerosene on the first floor. Only the front wall was left standing entire, and the fire was not out until after midnight.

The building was owned by the Connecticut Mutual Life-Insurance Company. It was formerly occupied by H. F. Murphy as a packing-house, and later as the factory of the Chicago Plow Works. The Archer Refinery, which has occupied the building for about eighteen months, is an incorporated company, with Samuel Allerton as President and E. H. Pray as Secretary. Its machinery was valued at about $75,000. The stick on hand was worth from $15,000 to $20,000. On this whole amount there was an insurance of $40,000 placed by McCormick & Findlay. The stock, of course, will be totally destroyed, and the machinery nearly so.