Since the report of last year, the Board have removed the Library to the Dickey Building, on the southwest corner of Lake and Dearborn streets. With a view of economizing in the amount of annual rent, as well as to secure in their new quarters such an allotment of room by an increase of space and light to be obtained, they have leased the third and fourth stories of said building, with one large room on the second floor, for a term of four years from the 1st day of May, 1875, at an annual rent of $3,500, which is a deduction of $1,500 per annum on the amount of rent paid for the rooms recently occupied. And, upon a careful estimate made by the Committee on Buildings and Grounds, it is confidently believed that a further sum of very considerable amount will be saved in heating and lighting the new rooms by economy in the difference of mode which is intended to be applied, and the better character of the building in these respects for that purpose.

Besides the considerations already named—the space afforded by the two stones which have been finished under the contract made with the owner of the building—the Library will now place at the disposal of all visitors. 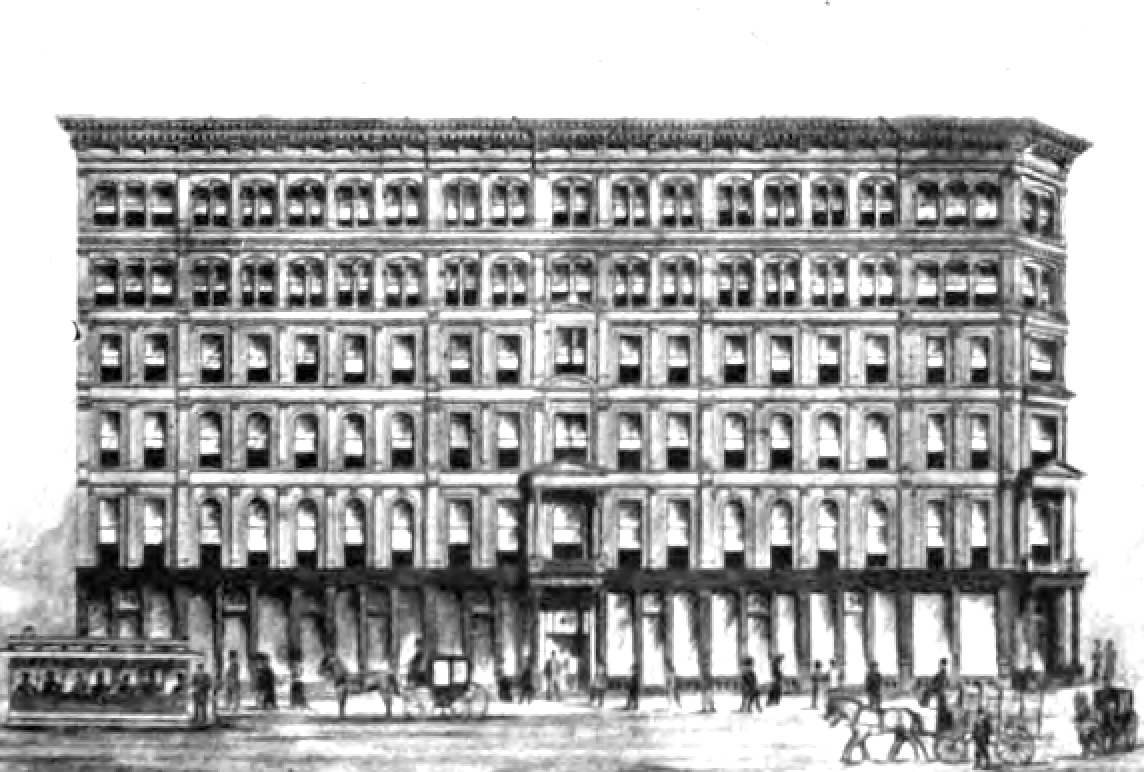 SPECIAL ACCOMODATIONS.
for those who desire to read in the Library, with a view to consulting all such works (of which there is now a large collection) that are too valuable for circulation, and may be used by the student or scholar, books of reference in connection with whatever branches of learning, in history, philosophy, sciences, and all he may desire.

INCREASE IN VOLUMES.
It will be remembered that in March, 1974, this Library was removed from the “Tank,” where the nuclus of the present library was formed. The books then on hand from donations made abroad numbered some 9,379 volumes. The Library was opened to the public May 1, 1874, with 17,355 volumes; on the 1st of December last (1874) it had 32,197 volumes, and the present number of volumes is nearly 40,000.

Considering the shortness of the period lapsed since the Library was first organized in May, 1872, this would seem very rapid, and, under some circumstances, a very satisfactory, condition of progress. But when it is taken in connection with the extraordinary demands made by our own people upon its capabilities; the liberal sympathy of the people abroad and at home who generously contributed toward its foundation; the ready co-operation which immediately after our great fire and during the year 1872 all our public authorities, State and municipal, lent to the inauguration of the enterprise; this Board confess to a feeling of disappointment in the lack of financial means enabling them to realize the just expectations of the general public by providing for their demands in the ratio of the

INCREASE OF BOOKS TO BORROWERS
and readers.

This increase has been without parallel in the history of American libraries. Mr. Poole, the Librarian, in a recent circular to the public, makes the statement that:

And the Librarian’s report accompanying the present document, exhibiting in the detail the condition of the Library, will show that the number of books taken out in circulation since the 1st of June, 1874—the date of our last report—has reached the total aggregate of 399,155 volumes, while at the beginning of the year there were on the shelves only about 18,000 volumes, which has been increased by purchases during the year, until now the whole number of volumes on our shelves is about 40,000, while the number of borrowers has increased to nearly 24,000.

It was in view of of such progress as this that the Board solicited from your honorable body the full amount of the fifth of a mill tax last year, which the Library bill provides may be levied on the valuation of property in all cities of State of over 100,000 inhabitants, in which the City Council has established a public library for the use of its inhabitants. This would have put to the credit of the Library found a sum last year of nearly $60,000. Instead of which the appropriation was limited to $25,000. It was well understood that our operating expenses would exceed that sum. The Board had opened the the Library to the public on the 1st of May, 1874, in anticipation of the receipt of the levy authorized by law, but were greatly disappointed on finding that they were to receive less than half that sum, and that your honorable body refused your concurrence in what they conceded to be then an urgent public demand.

Centrally located on the southwest corner of Dearborn and Lake streets, havmg a frontage of 180 feet on Dearborn and 80 feet on Lake, with a large open court in rear, which affords excellent light, thorough ventilation and good shipping facilities. Passenger and freight elevators, all equipped with the
most modern safety appliances. This building has become the headquarters of the steam heating and hardware business.

The Dickey Building
Fronts 200 feet on Dearborn and 75 feet on Lake Street, at the southwest corner. Here, in the upper story, the Chicago Public Library had its home before it removed to the City Hall. The building is an old-style stone front, 60 feet high, with 5 stories and basement, 12 stores, 30 offices, and 1 passenger elevator. It is occupied by the Northwestern University Law School, the Illinois College of Pharmacy, and the Irish American Club. It was erected in 1873.= 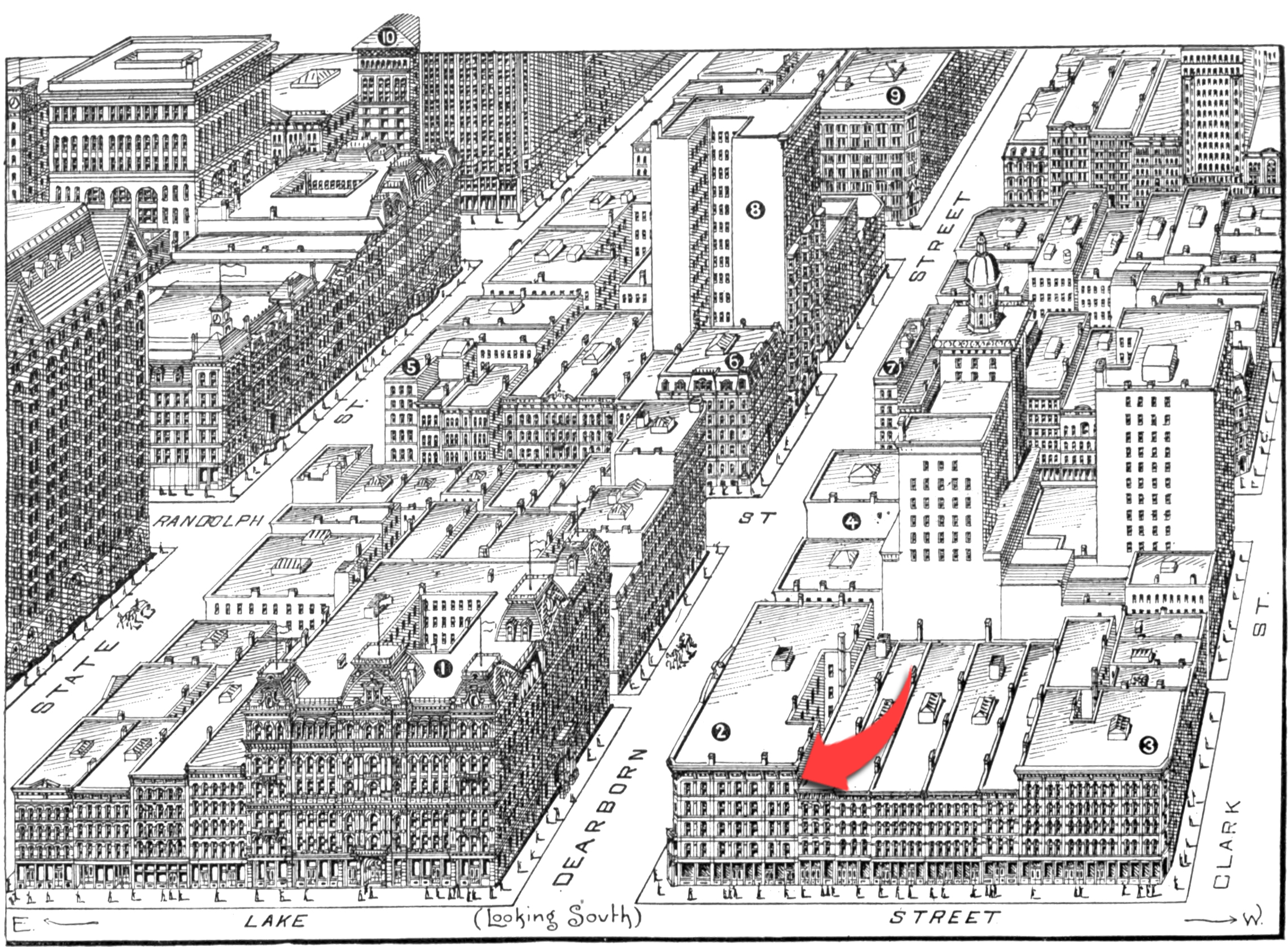 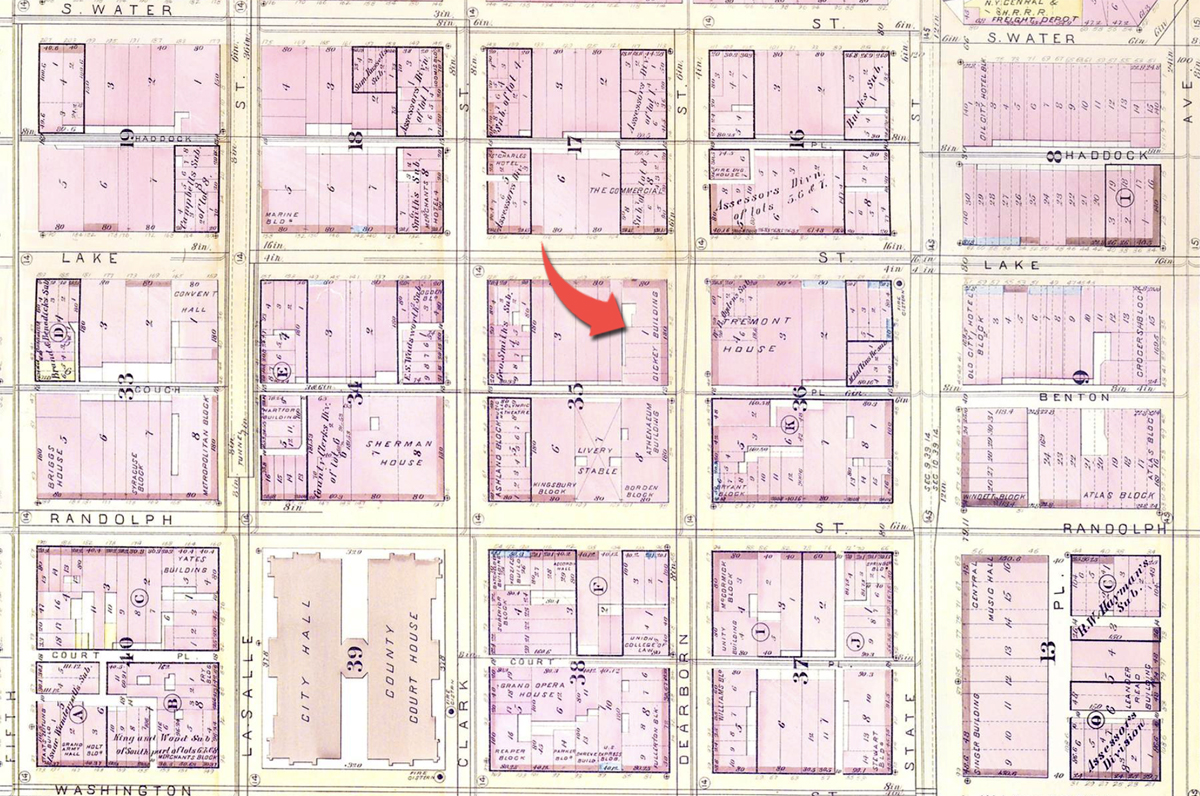