Excerpted from Relics of the Fire, The Little Corporal, March, 1872

It is proposed to build a monument in one of our parks, of the burnt out safes, among them, perhaps the one which held the Little Corporal’s books and papers, while they burned to ashes.

The corner-stone of the Fire Monument at Central Park (later Garfleld Park) was laid yesterday. In spite of the leaden skies and raw winds of the morning, a large number of persons assembled at the Milwaukee depot to take a free ride to the edge of the city and witness the ceremonies. The Grand Masonic Lodge of Illinois was invited to lay the stone with the impressive rites of the Order, and came in their regalia, accompanied by bands, Ellsworth’s Zouaves, Knights Templar, and the following lodges; Cleveland, Garden City, Pleiades, Keystone, Covenant, Wabansis, Meterie, Bigelow. The train, consisting of eleven cars, kindly furnished by the Northwestern Railroad, left at 11:30, and in fifteen minutes reached its destination.

THE SITE OF THE MONUMENT
is at the terminus of Washington street. A platform had been erected, and the stars and stripes waved above it in the damp air. The useful derrick from which the stone hung suspended, did not know itself in its new suit of evergreens. Carriages carrying a number of the fair sex were on the ground, and away beyond them could be seen laborers carting dirt from an excavation where a lake is to abide, to where a miniature mountain is to break the monotony of the plain. To the south, were trees, and the bit of the park already sodded, and to the west of the beginning of other ponds, and all over and around the places where in a few years from date will be shady groves and sylvan recesses for “whispering lover made.” It will be nice then. To the north lay Humboldt Park, and away south is where Douglas Park is yet to bloom like another Eden.

THE DISTINGUISHED COMPANY.
While these topographical notes were being taken the procession of Masons was slowly winding its way around the road to the scene of operations. The spectators took up the best positions they could find, among them being Mayor Medill, Hon. A. H. Burley, George W. Stanford, Henry Greenebaum, C. C. P. Holden, Isaac R. Hitt, E. F. Runyan, Clark Lipe, Charles, Lodding, David Cole, Paul Cornell, Colonel Snowhook, Hon. Carlyle Mason, and about two hundred others. The members of the Grand Lodge stood round in a circle, the Templars behind them, and the other Masons behind them. Silence prevailed for a few minutes, while an enterprising photographer made a picture of the scene.

CALLED TO ORDER.
The Most Worshipful Grand Master Cregier called the assemblage to order, and said that on Oct. 30, B. C., 1003, King Solomon had dedicated theb temple at Jerusalem, and on Oct. 30, 1872, they had assembled to lay the corner stone of a monument to commemorate the most direful calamity that ever befell a people.

The Grand Chaplain, Rev. Robert Collyer, made a prayer.

CONTENTS OF THE BOX.
Grand Treasurer Church read the list of articles in the tin box to be deposited in the diminutive vault beneath the stone. There were copies of the laws under which the West Side Park Commissioners act, copies of the first, second, and third annual reports ofn the Commissioners, photographs of the monument, copies of the transactions of the Grand Lodge of Illinois, the eleventh annual report of the Board of Public Works, a piece of the Court House bell, copies of the daily papers issued after the fire, and of Oct. 9 and 30, 1872; report of the Relief and Aid Society, maps and photographs of the burnt district, North and South, an account of one year after the fire, and of the railroads.

THE STONE LOWERED.
The box was deposited in its long home, the stone gradually lowered, the band all the while playing Plegal’s hymn, beginning—

Solemn strikes the funeral chime.
Notes of our departing time,
As we journey here below
Through a pilgrimage of woe.

Mr. W. L. N. Jenney, architect of the West Side Parks, spread the actual cement and then presented the working tools to the Grand Master. The symbolic masonry was next in order. The Acting Deputy Grand Master, Dr. Powell, sprinkled on the stone, corn, the emblem of plenty, the Senior Grand Warden, Sutton, poured upon it wine, the emblem of joy and gladness, and the Junior Grand Warden, Barnard, annointed it with oil, the emblem of peace. The tools of the craft were applied to the stone by the three officers named, the Grand Master struck it three times with the gavel, and pronounced it truly and trustily laid according to the forms of the ancient craft, Grand Marshal Cushman made the proclamation, the Divine blesseing was invoked, and the entire assemblage joined in singing the following:

ODE, WRITTEN FOR THE OCCASION:
By art the Corner’s laid;
Father, the Craft Thine aid—
Thy Blessing crave.
Guide Thou the cunning hand,
Be with the workman band,
Long let the City stand,
From harm, it save.

The Corner-Stone is laid,
The Corner, level made.
Plumb let it stand.
Proud may the column rise
To great the azure skies;
Approve our work, Allwise,
And bless this land.

Heavenward point the shaft,
Prov’d by the Ancient Craft;
While loftier spire,
Tells from a deeper base,
How love, with saving grace,
Cause promptly to efface
Chicago’s Fire.

INSCRIPTION.
The Grand Master returned the working tools of his profession to Mr. Jenney, and committed the future care of the monument to him. The corner stone bears the following inscription: 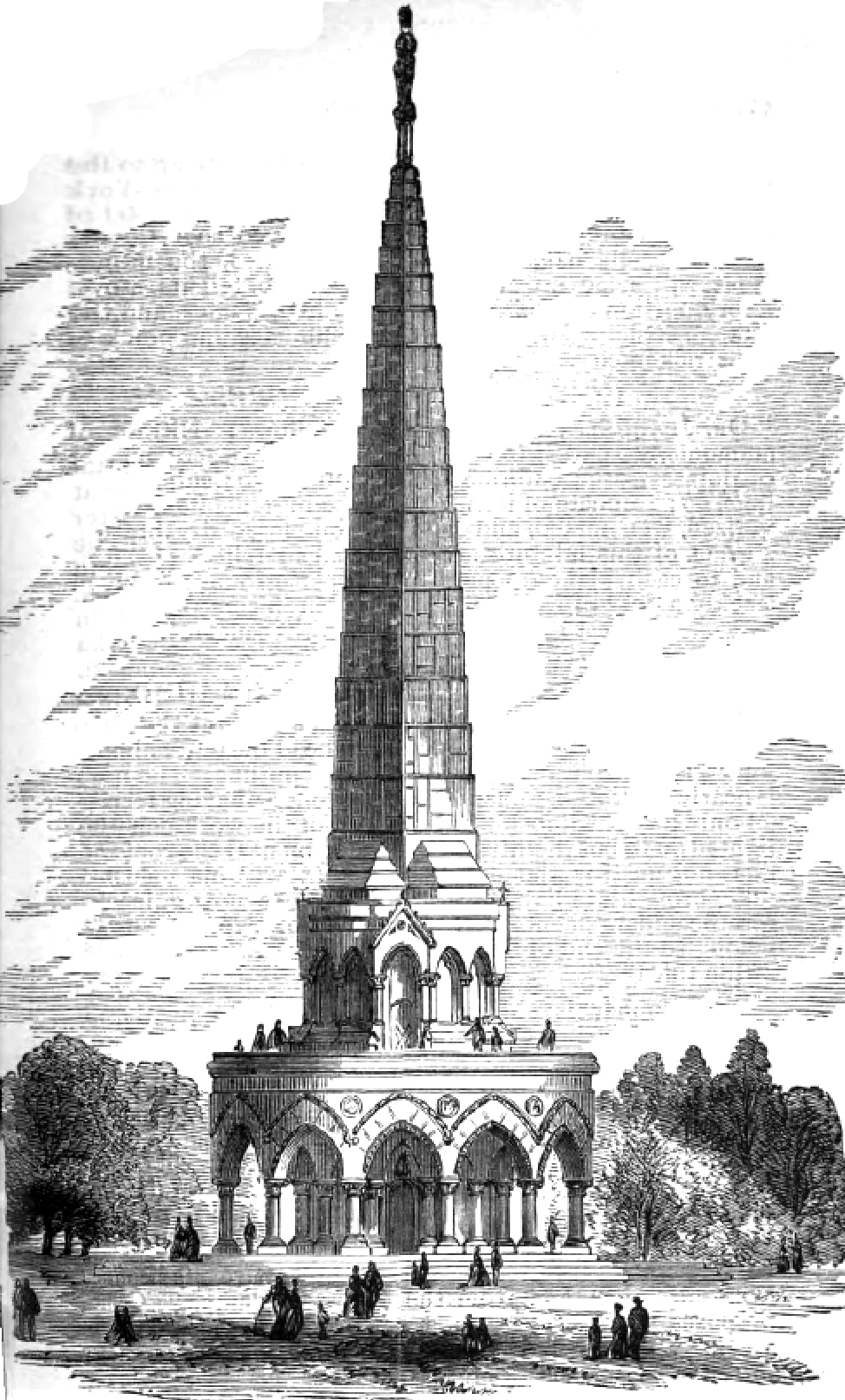 In the account given of the great conflagration at Chicago, in Science Record for 1872, mention was made of the immense number of iron safes that proved worthless, under the terrible ordeal to which they were subjected: and a suggestion was there given for the erection of a grand monument to be composed of the debris of the safes, sacred to the memory of their manufacturers, and of the worthless insurance companies, and the wretched police and fire departments—institutions which proved so sadly deficient at the critical moment. That suggestion has been actually adopted, and the monument is now being erected in Central Park (Garfield Park), Chicago, at the termination of Washington Street. The corner-stone was laid with civic and masonic honors. We give an engraving of the monument from a photograph of the design.

The structure will be singular in shape and material. The superstructure is circular in form, and composed of a series of columns connected by arches, allowing full passage to spectators. Above this, and rising to a considerable height, is the shaft, curiously fashioned from a huge collection of portions of burnt safes that were dug from the debris. The columns, arches, and main objects of architectural embellishment are likewise relics of the fire—marble cornices and granite remains of every possible size and shape.

The idea of perpetuating the conflagration by the salamander properties with which it played so furiously was extremely nappy, and when completed, the monument will need no descriptive legend to tell its story. Every portion will exhibit the heat of the flames, and the strange structure will testify to the industry and pluck of the stricken city.

AFTERMATH
The interest and financial support necessary to complete the project did not materialize, and the unfinished monument was eventually removed.