Within days of the Chicago Fire of 1871, William D. Kerfoot erected the first building in the burnt district at 89 Washington Street. An enterprising real estate agent, Kerfoot posted a sign proclaiming All gone but wife, children, and energy.

This was the typical gloating done by Chicago’s rivals after the devastation. It was quite obvious to anyone viewing the remains that a city that had grown to 300,000 people in thirty years could never recover.

Chicago will never be like the Carthage of old. Its glory will be of the past, not of the present; while its hopes, once so bright and cloudless, will be to the end marred and blackened by the smoke of its fiery fate.

John Stephen Wright, one of the first citizens of Chicago, answered this constant pestimism about Chicago’s future with these words:

Chicago will have more men, more money, more business, within five years than she would have had without the fire.

He was often ridiculed for his fairyland vision of Chicago, but even his dreams were pale compared to reality. By 1880, Chicago’s population reached over half a milliion. 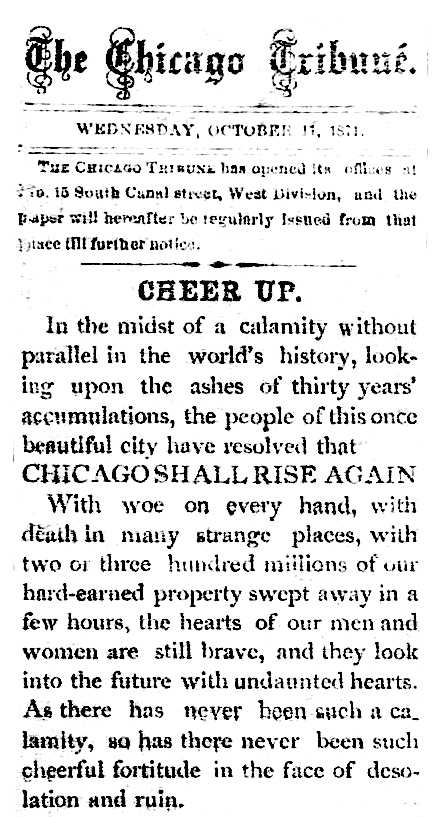 On Wednesday, October 11, 1871, after the editor had to borrow $64 from friends to buy paper, a half sheet paper was issued by The Chicago Tribune with a five column story of the fire with the following editorial beginning:

CHEER UP
In the midst of a calamity without parallel in the world’s history, looking upon the ashes of thirty years’ accumulation, the people of this once beautiful city have resolved that
CHICAGO SHALL RISE AGAIN!

With woe on every hand, with death in many strange places, with two or three hundred millions of our hard-earned property swept away in a few hours , the hearts of our men and women are still brave, and they look into a future with undaunted hearts. s there has never been such a calamity, so has ther never been such cheerful fortitude in the face of desolation and ruin.

This editorial set the tone of determination for the city to return to its former glory. John McKnight, set up a fruit and cider stand in the middle of Clark street’s rubble. Typifying the humor that often accompanied the determination, realtor, William D. Kerfoot announced his reopening with “all gone but wife, children and energy.”

Wood’s Museum was wholly destroyed, and conspicuously upon the bricks was a sign that was inscribed:

Owning to circumstances over which we have no control, we have removed. 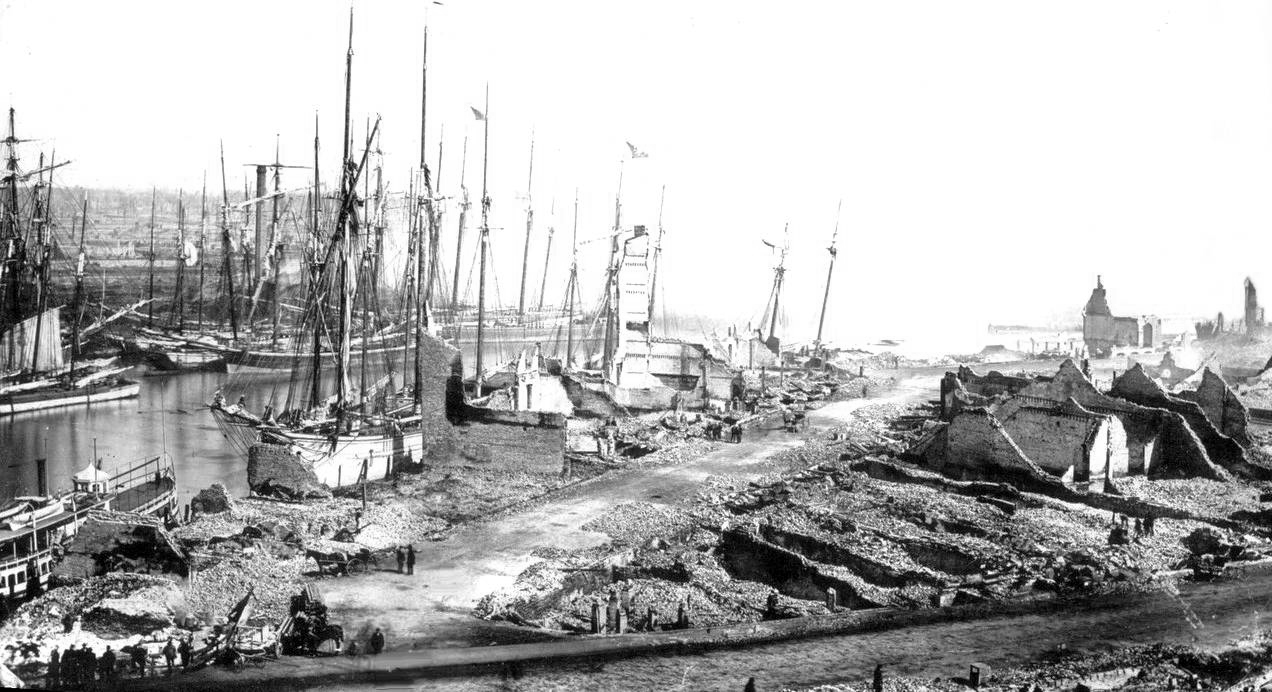 In an East St. Louis depot, the following conversation took place between a carpetbagger rushing to catch a train to Chicago and a gentleman who he elbowed in his haste: 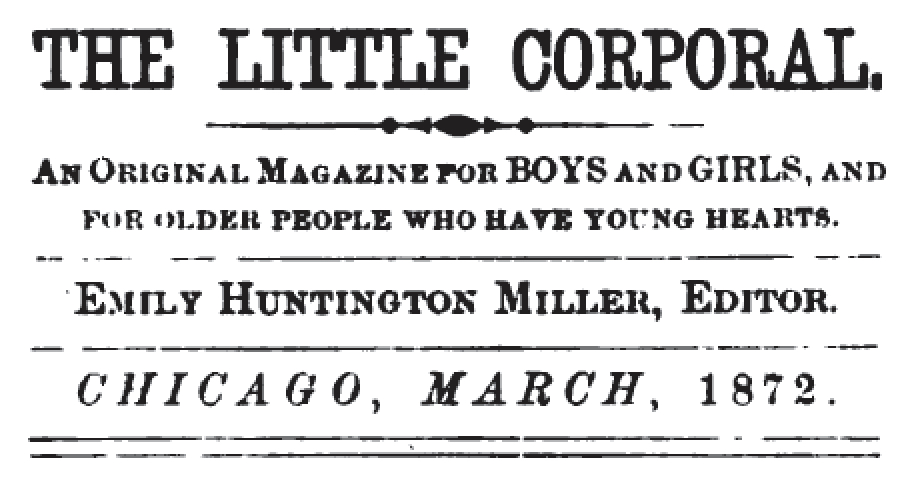 Relics of the Fire
The fire that came near burning us all up, started a new trade; and as it’s mostly in the hands of the boys, I ’d like to tell you in what droll yet sad things it deals.

The big stores, of course, were full of goods, from cellar to attic, and when—in that awful night—the brick walls fell in, everything was buried beneath them. In a few days, before the ruins were done burning, boys began to poke and dig among the piles of brick and stone, as they always do—and, by the way, can any of you Little Corporal boys tell me why they do?

This time they brought up various half-burned articles, which were readily bought by the bystanders, and before a week the new trade was in full blast. Now you can scarcely pass a corner in the business streets, without being saluted with the cry:
“Relics of the fire!” and funny things you ’ll see, spread out on the sands.

Hardware stores furnish whole kegs of nails welded together, yet retaining the shape of each nail; papers of tacks and screws melted in the same way, making curious paper weights; dozens of forks firmly soldered together; and wonderful stalactites of iron.

Stalactites—perhaps you know—are formed like icicles, while the metal is melted.

Crockery stores furnish cups and saucers, bronzed by fire; piles of plates melted together; fancy bottles with a sentimental droop of the head to one side, as if they ’d been faint; unbroken egg glasses with the tops bent over together as though they were about to collapse, but thought better of it.

Then the grain warehouses furnish exquisite bits of charcoal, made of wheat, every grain perfect and glossy, as though polished.

The toy shops—alas! how can I tell the tragedies there! Dolls with glass eyes melted out; wax dolls with complexion melted off; long haired beauties, with not a hair to their heads; all black and horrid. Square blocks of beautiful glass marbles welded together, and bent as though made of wax; chunks of china dolls, of all sizes, joined for life in grotesque ways. But, saddest of all, china babies in bath tubs, who it seems are packed in pairs (one turned upside down on another, as you put a cover on a dish), fastened together in such a way that one of the unfortunate babies must always sit on its head!

It is proposed to build a monument in one of our parks, of the burnt out safes, among them, perhaps the one which held the Little Corporal’s books and papers, while they burned to ashes.