Designed in 1873, the Washington Block was one of the most distinctive commercial office buildings erected during the reconstruction following the Chicago Fire of 1871, and it remains as a survivor of a significant building type which has all but disappeared from the downtown business district. Its significance lies not only in the fact that it is one of the few remaining major buildings of its period and type, but more importantly the precision detailing of its virtually intact sandstone facades mark it as a building of individual architectural distinction.

The Washington Block was commissioned in 1873 by John P. Olinger of the real estate firm of Olinger & Ballard and Mrs. Barbara Cure, representing an investment of approximately $70,000. Although its location was somewhat west of the established business district, the Washington Block was typical of the speculative ventures undertaken by real estate developers after the Chicago Fire in hopes of establishing outlying properties as desirable business locations. The corner of Washington Street and Wells (originally Fifth Avenue) Street initially showed great potential as a business center as indicated in an article about the Washington Block which appeared in the Real Estate and Building Journal for February 14, 1874:

This building, with those occupying the other three corners, (all of which are very beautiful,) combines to form a series of the most attractive business corners on the South Side [of the Chicago River] , and virtually does away with all rumors regarding the low value of business property in the location named. It probably has enhanced the price of real estate at least 25 per cent within the past six months, and no doubt this figure will be doubled within the next twelve months. The buildings are all of a superior kind, and if the spirit manifested by property owners continues, and the nature of the buildings still maintains its magnificent character, the blocks between LaSalle Street and the river will be fully as valuable as in any quarter of the city.

Described in the same article as being “beautiful modern” in style, the sandstone street facades exhibited a high degree of individuality through the use of diverse eclectic forms and detailing. In marked contrast to the busy columns, pilasters, pediments and other applied details that characterized many of the structures built immediately after the Chicago Fire, the Washington Block gained its architectural effect through a disciplined development of flat wall surfaces. The wall surfaces were given a distinct flat, horizontal expression through the use of deep horizontal rusticated joints and the alternation of large smooth faced stone courses with narrower courses subtly textured with line borders and broached, or textured, surfaces, creating a light striped effect across the entire facade. This horizontality was further emphasized by continuous, slightly projecting band courses integral with the sill lines of the third and fifth stories, visually defining the variations in treatment of the base, middle stories, and top story of the building. Windows were treated as simple punched openings, emphasized by carved hoods or surrounds which gave the visual effect of being superimposed over the surrounding wall surfaces. Entrance locations were prominently expressed in the facade composition, with one principal entrance at the chamfered corner and another centered on the Wells Street elevation, defined by a slightly projecting bay which extends up the full height of the building, balancing the Wells Street elevation with the narrow Washington Street elevations. The entrances were emphasized by the use of high relief profiles and applied ornamentation, the detailing and asymetrical treatment of which represent some of Chicago’s finest examples of the then-prevalent Victorian Gothic influence.

Characteristic of buildings of the period, the floor level of the first story was below grade and was entered from staircases leading down into open light wells extending around the entire street frontage, separated from the sidewalks by iron railings. These wells have long since been covered over, making the present-day ground floor openings seem extremely low at sidewalk level. When originally designed the desirable second story “walk-up” offices were accessible directly from the sidewalk by two exposed exterior staircases, but these also were later removed when the development of elevators reduced the desirability of direct second floor access for business purposes.

In a 1952 remodeling of the ground story many of the decorative profiles and texturing of the stonework were sheared off to facilitate the installation of porcelain-coated metal facings. The recent removal of these metal panels has again partially exposed the stone piers which although scarred, still retain much of the integrity of the stonework and opening sizes. Another unfortunate alteration was the removal of the original sheet metal cornice and cast-iron cresting, but a good example of the quality of the original cresting can be estimated by the ornamental window grills which are still extant at the third story level.

According to contemporary descriptions, the interior was finely finished with hardwood trim, and it featured partitions of plastered hollow clay tiles, representing an early use of fireproof interior construction techniques. Examination of the ground story shows no evidence of the original interior features and trim, but the upper stories may still retain some of the original interior features. 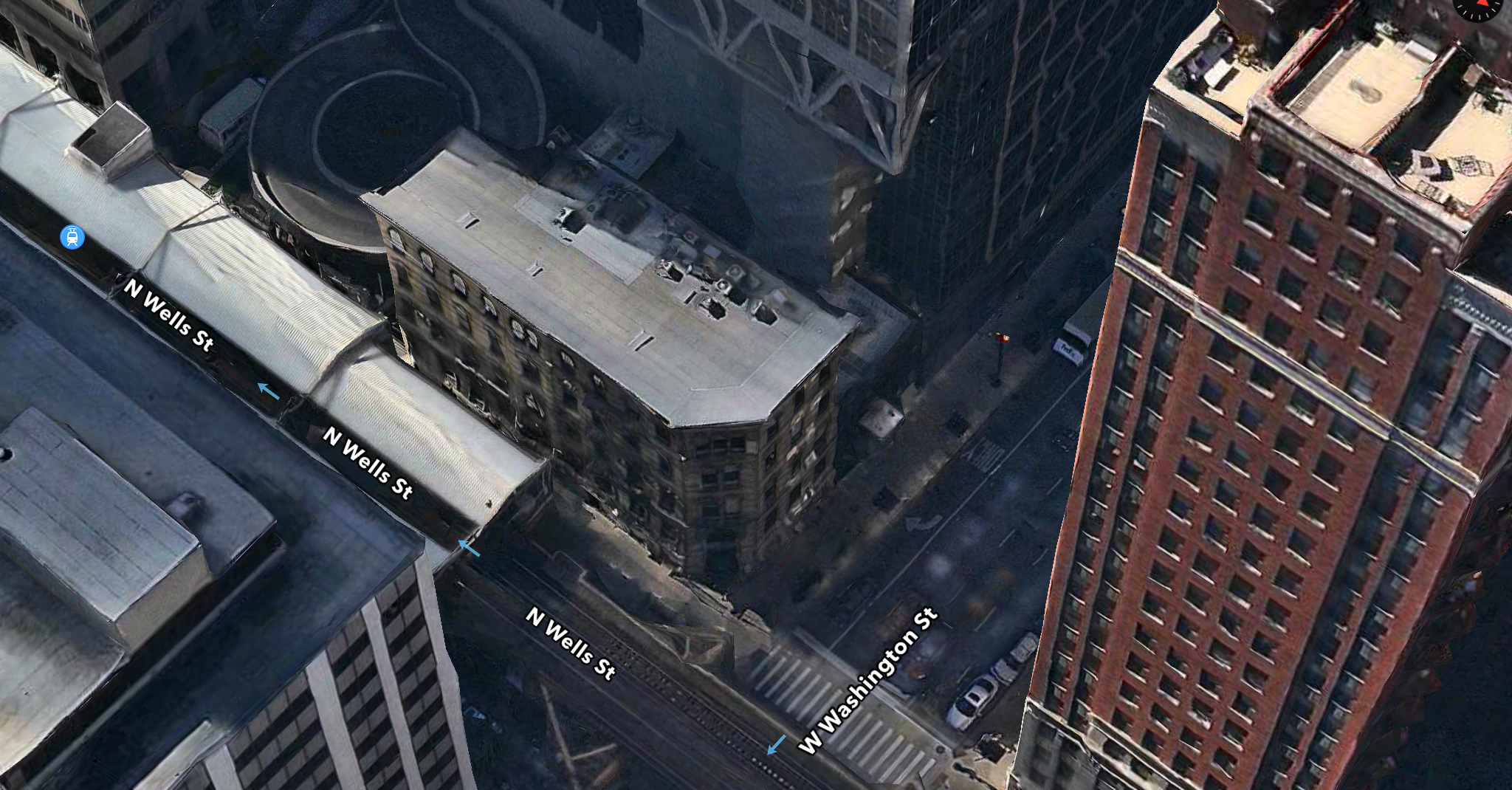 The partnership received a large share of the work in rebuilding the downtown area following the Chicago Fire of 1871, their work including such major structures as the Bryan Block, Ashland Block, Metropolitan Block, and the Union National Bank Building. Of the major works of Frederick and Edward Baumann, the Washington Block is the sole survivor. The Baumanns were also noted for their expertise in the field of engineering, the most notable achievement being Frederick Baumann’s development of the isolated pier foundation which was a significant advance in developing adequate stable foundations for Chicago’s
compressible soil. 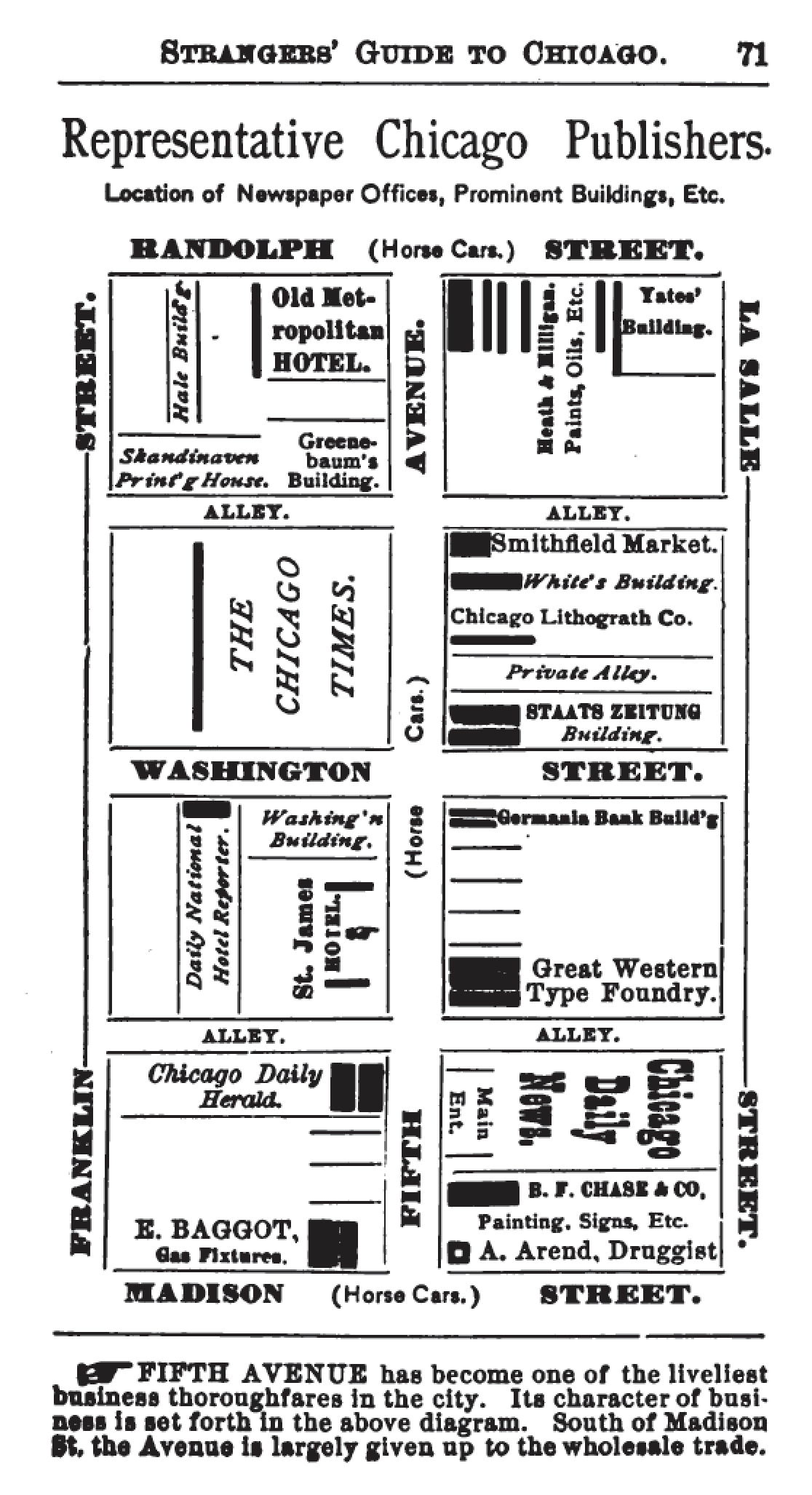 As an example of a 1870s office building, the Washington Block is a remarkable survivor of what was one of the most short-lived building types in Chicago architectural history. Although considered to be the pride of the city in the decade following the Chicago Fire of 1871, the countless four- and five-story office buildings which arose in the downtown commercial district fell into disfavor with their owners during the 1880s and 1890s due to the significant advances in engineering and design that produced the earliest multistory metal framed “skyscraper” buildings. Capitalizing on soaring land values and increased tenant demand, owners seeking maxium land use quickly destroyed the costly buildings which they had erected only a decade before in favor of more profitable buildings of ten stories or more. In some instances, owners tried to make these post-fire structures competitive by adding additional stories or remodeling the interiors, but these efforts were mostly futile. The disfavor which these buildings fell into is best described by the following excerpt from The Standard Guide to Chicago for 1891, which describes Frederick and Edward Baumann’s Bryan Block, but could well describe the attitudes felt at the time for any of the 1870s structures still standing:

The Bryan Block is another of the back-number great buildings of the city. I very well remember that fifteen years ago it was pointed out with pride; now it isn’t pointed out at all. . . . Some day a great building will occupy the site, for the ground upon which it stands is far too valuable for a five story edifice.

The survival of the Washington Block was due in large part to its location at the western fringes of the business district, an area that its owners had hoped would develop into a viable district of rapid commercial devleopment. Although the area showed early promise of fulfilling their expectations, it became clear by the 1880s that the site was too far west to be a prominent part of the desirable business district. Construction of the Union Loop Elevated Railroad along Wells Street in 1897 further retarded development. Consequently, the Washington Block survived due to its isolation and escaped the demolition or major remodelings that were suffered by other office buildings of the same period.

That the Washington Block is one of the few survivors of the post-fire office buildings is indeed fortunate, for its distinctive facades mark it as one of the best of its period and type. Equally fortunate is the fact that the exterior elevations have remained virtually intact, the most serious missing elements such as the cornice and ground floor detailing being the most easily replicated in terms of cost and available materials. After nearly a hundred years of being forgotten, the Washington Block is once again in an area for business development, and it offers a unique opportunity for the successful restoration of this rare and important structure. 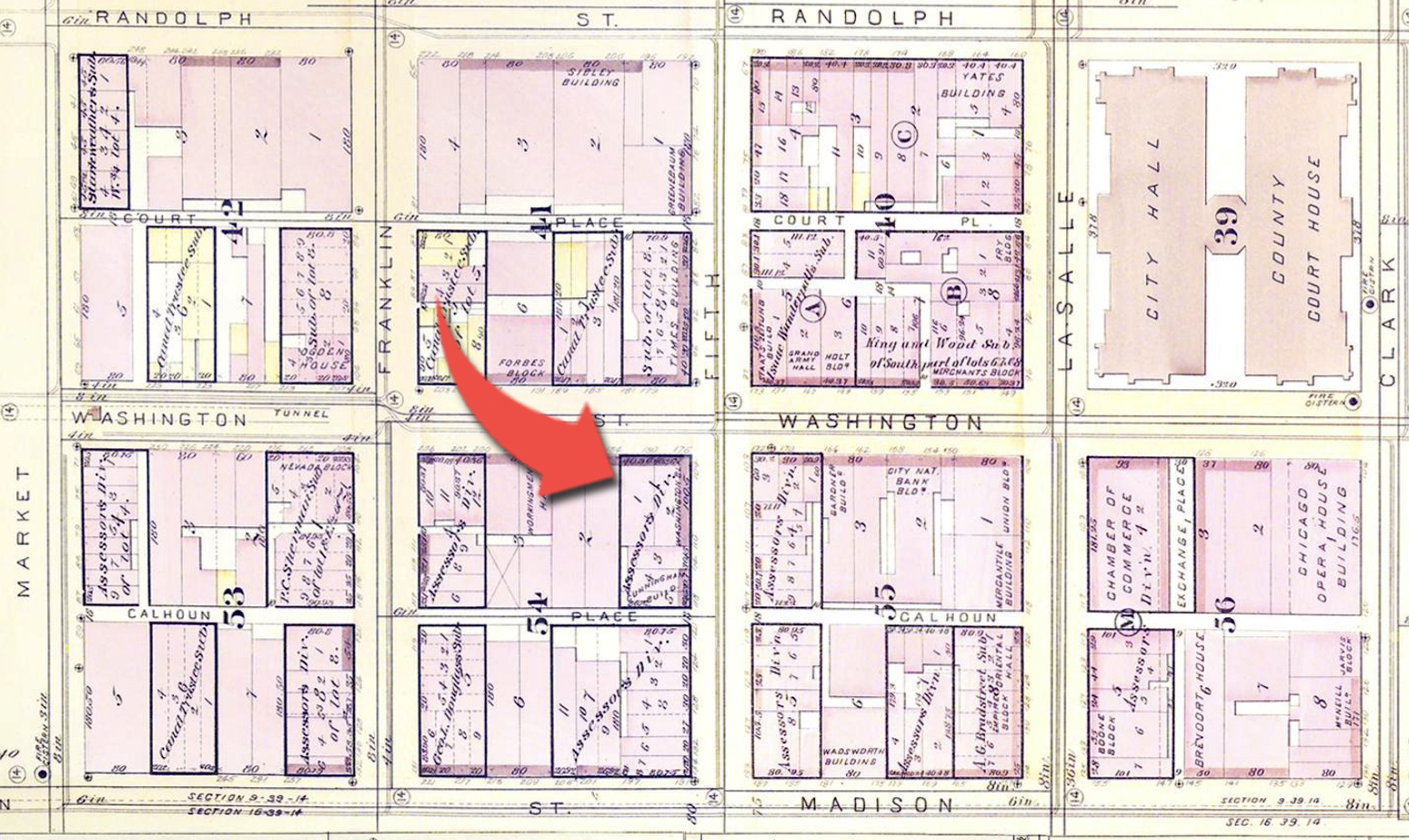