Final architects’ plans for Chicago’s tallest building, to be erected at the southeast corner of Wabash and Washington streets, were revealed yesterday. It will be called the Pittsfield Building, to commemorate the town where Marshall Field got his first position, and wlll be 557 feet high, a foot taller than the Chicago Temple. The main portion of the building will be twenty-one stories high and the tower will rise to thirty-eight stories.

Graham, Anderson, Probst & White are the architects for the building, which is being erected for the Marshall Field estate. The exterior material is to be of brick or terra cotta, or a combination of both. The roof will be of copper, weathered green. 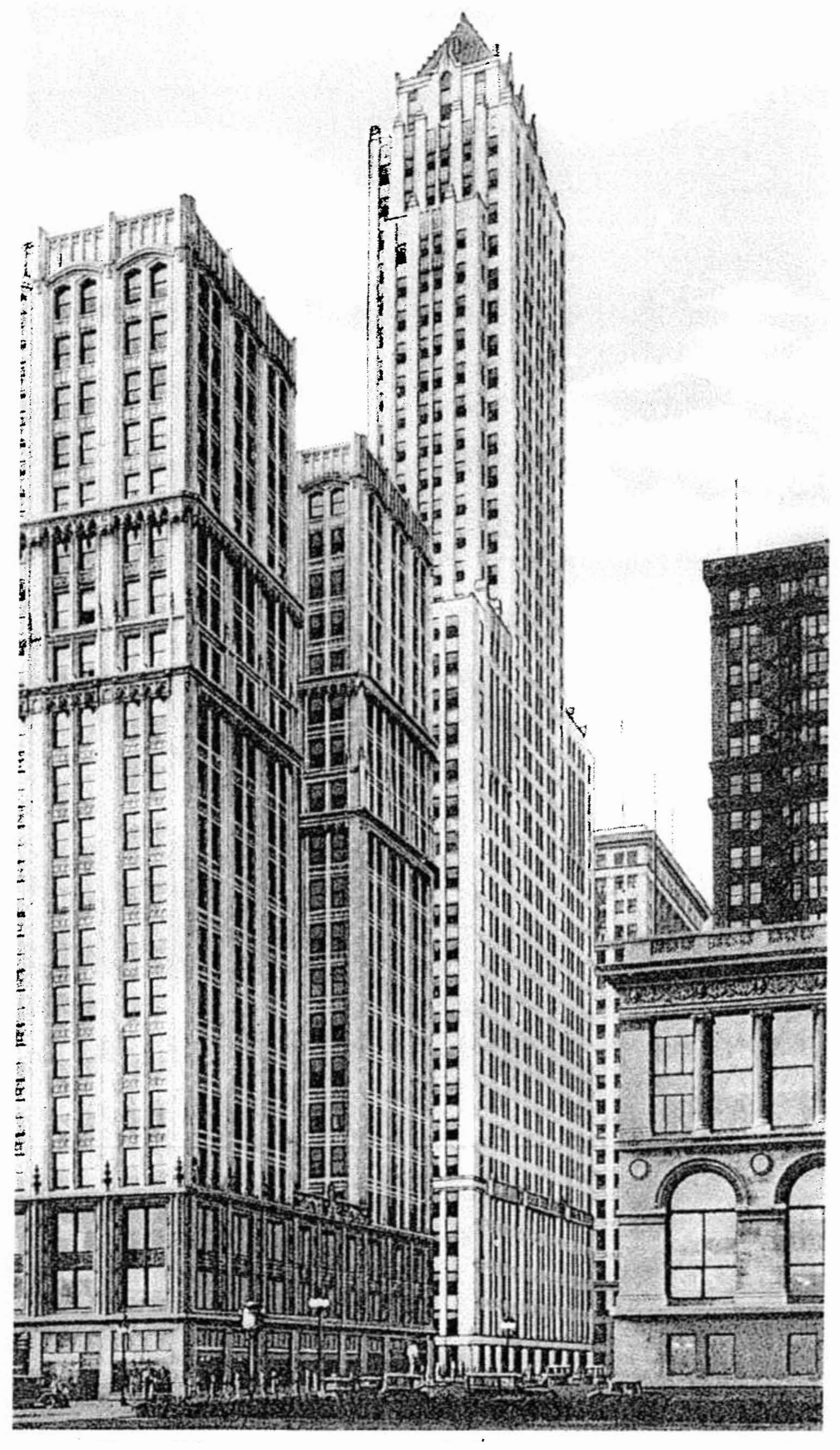 Pittsfield Building, circa 1927.
The building is an excellent example of a 1920s skyscraper combining both Gothic and Art Deco detailing.

BREAK RECORD IN PUTTING UP PITTSFIELD BLDG.
All records appear to hve been broken in the construction of the Pittsfield building at the southeast corner of Wabash abd Washington. Work started on on the foundations for this thirty-eight story structure on Nov. 1, 1926, and eleven months later, Oct. 1, 1927, it was ready for tenants. 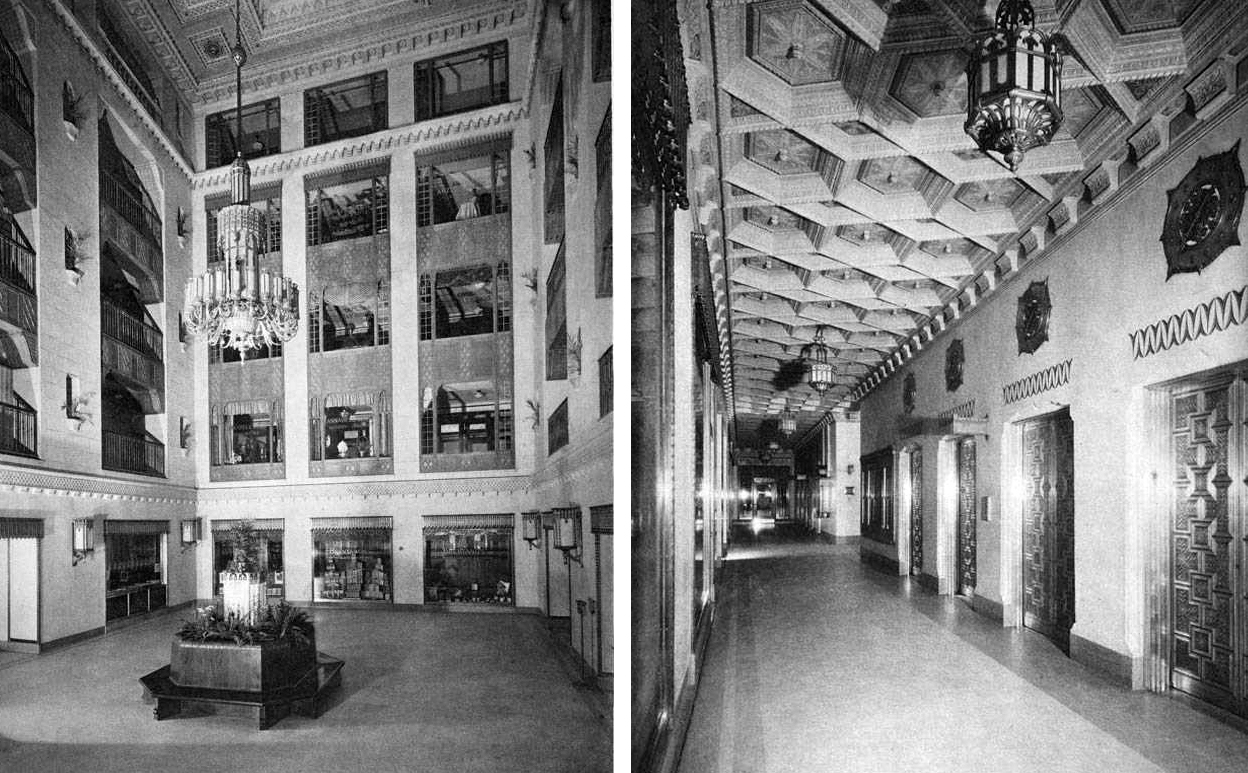 (Eleventh article in a series)
There are some 750 “doctors in the house” at the Pittsfield building, largest medical and dental office building in the world, reports Frank M. Whiston of Frank M. Whiston & Co., managing agent for the property since 1933.

Helping the medical profession to fill the 557 foot tall building at the southeast corner of Wabash avenue and Washington street are a number of laboratories, offices, and stores of medical supply concerns, a variety of general retail shops, and a large contingent of jewelers.

The building was designed primarily for medical tenancy, said Whiston. The jewelers’ presence there is accounted for by the fact that Wabash avenue at that point long has been a center fo their trade in Chicago. 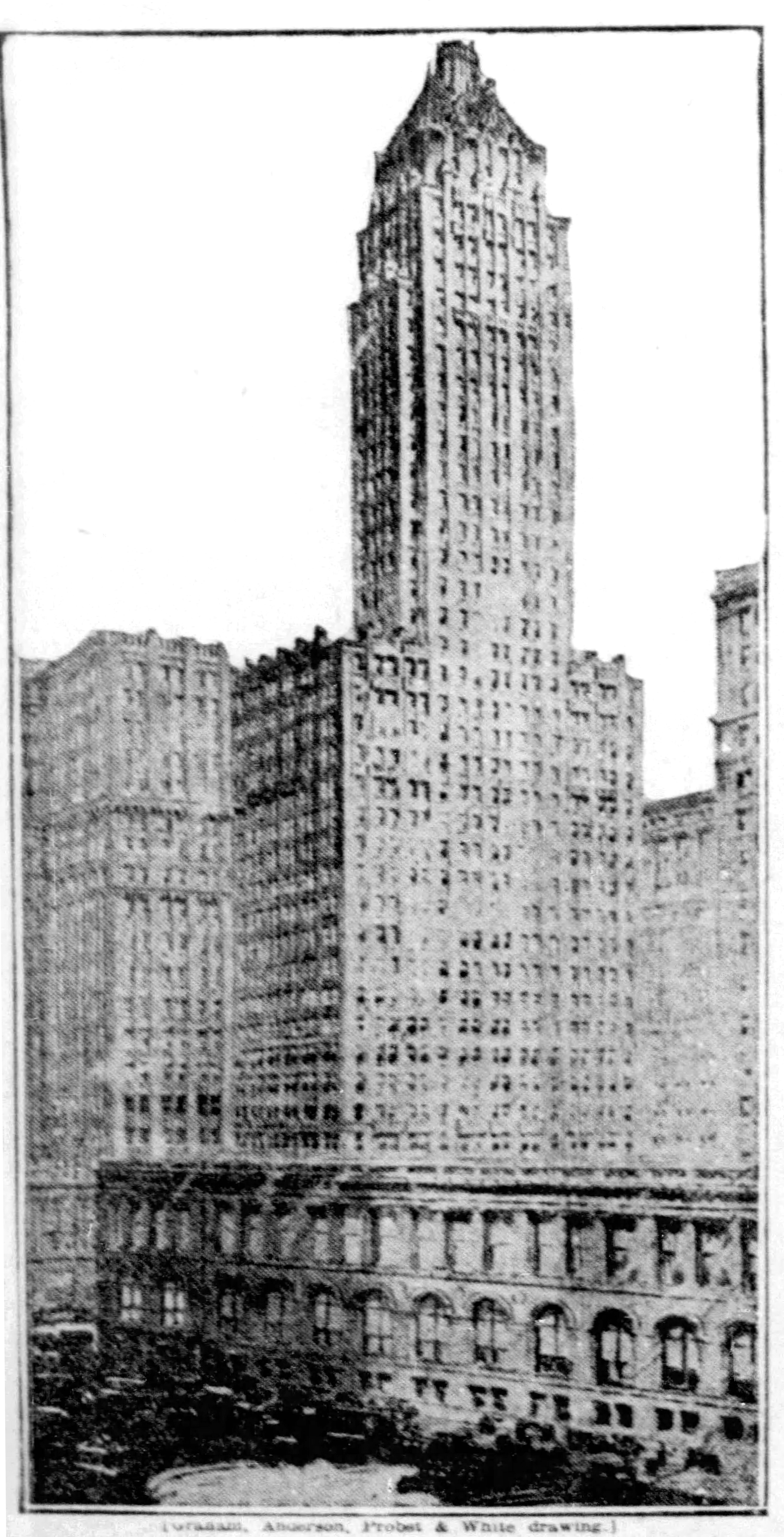 The Pittsfield was built in 1927 and 1928 by the estate of Marshall Field from plans by Graham, Anderson, Probst & White. One of the city’s tallest buildings, it has 38 tenant floors plus a three story superstructure containing its elevator machinery.

Its most notable design feature, perhaps, is the spacious marble and bronze rotunda, six stories high and ringed with shops. Another feature is the lower arcade housing a restaurant and two private lunch clubs—the Chiselers, for medical men, and the Jewelers club.

About 45 per cent of the building is air conditioned. Conversion of 14 passenger elevators to automatic contraol is at the halfway point.

Among office buildings, the Pittsfield has a tempo all its own, Whiston said.The morning rush hour for most skyscrapers begins about 8, but at the Pittsfield life begins in earnest about 10:30 a.m. when the doctors arrive from their morning hospital calls.

A medical building differs, too, in its enormous plumbing and electrical power requirements, said Whiston. In the Pittsfield, for example, there’s a washstand for every 150 square feet of space. Twenty-four hour phone answering service is another must.

An elaborate alarm and guard system is maintained in an effort to discourage jewel thefts. A touch of one of the alarm buttons in any of the jewelers’ quarters sets off a siren and to hinder a getaway, stops the elevators and alerts the guards to lock the doors leading out of the building.

If you find somebody in the lobby eyeing you, it’s much more likely to be a member of the plain clothes detail maintained by the building than a medico sizing up your visible ailments. The jewelry insurance rate in the Pittsfield is the lowest of any building in the country, said Whiston.

The building fronts 162 feet on Washington and 120 feet on Wabash. In 1944 the late Marshall Field III gave the building and land to the Chicago Natural History museum.

For all the medical help around, the Pittsfield can cause an occasional headache.Some time ago the steel furnace stack atop the building was found t be shrinking at the rate of a foot a year. Gases were earing it away, from the top down.

Borrowing conceivably from the dentist’s manual, engineers quickly istalled a filling—a lead liner that extends over the lip of the stack. No sign of decay since, reports Whiston.

The formal opening of Brentano’s new Chicago store yesterday was accompanied by mammoth floral display and an orchestra banked behind an impressive display of palms. It was difficult at first to realize that you were in a book shop when you stepped into a room which is wainscoted in cathedral oak and has a dim, mysterious light floating through a stained glass window. But low stands of books reassured you, and after you had got over the feeling that you were either at the funeral of a very successful bootlegger or at his wedding, what with the expensive musical and floral offerings, you realized that there had been achieved a shop which gives you the impression of a cozy one, but which is in reality a vast spot.

The main floor shop has an amusing little annex which goes out into the lobby of the Pittsfield building. There you may find all the magazines published in America. There is a businesslike looking balcony across the end of the shop where the office work is done. A shop all cathedral oak is, yiu must admit, an alluring and beautiful place.

It is the basement shop, however, which startles you. It seems to go on and on, like the dormouse’s tail. It must be practically the entire basement space of the whole Pittsfield building. It’s a mammoth place, and, mirabile dictu, every inch of it is as light as day. The shelving and tables are all a nice Italian green. You feel as if guides should be supplied, like the guides in The Tribune Tower, to take you through the plant. They have overcome, however, the vast barniness pf the old shop on Wabash avenue. They have an enormous shop, but so skillfully has their architect used the walls and columns at his command that there is something of the intimacy of a small shop about it. 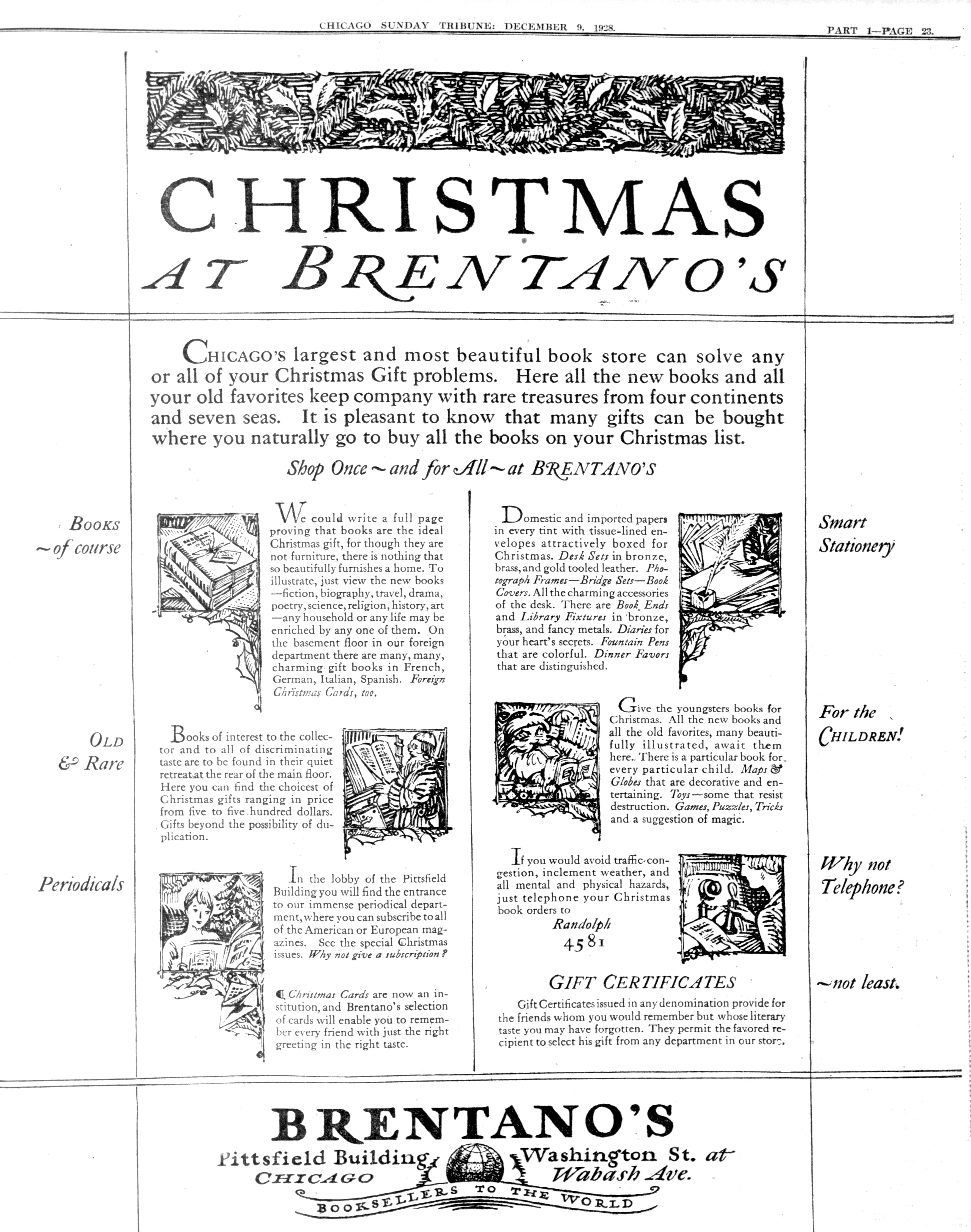 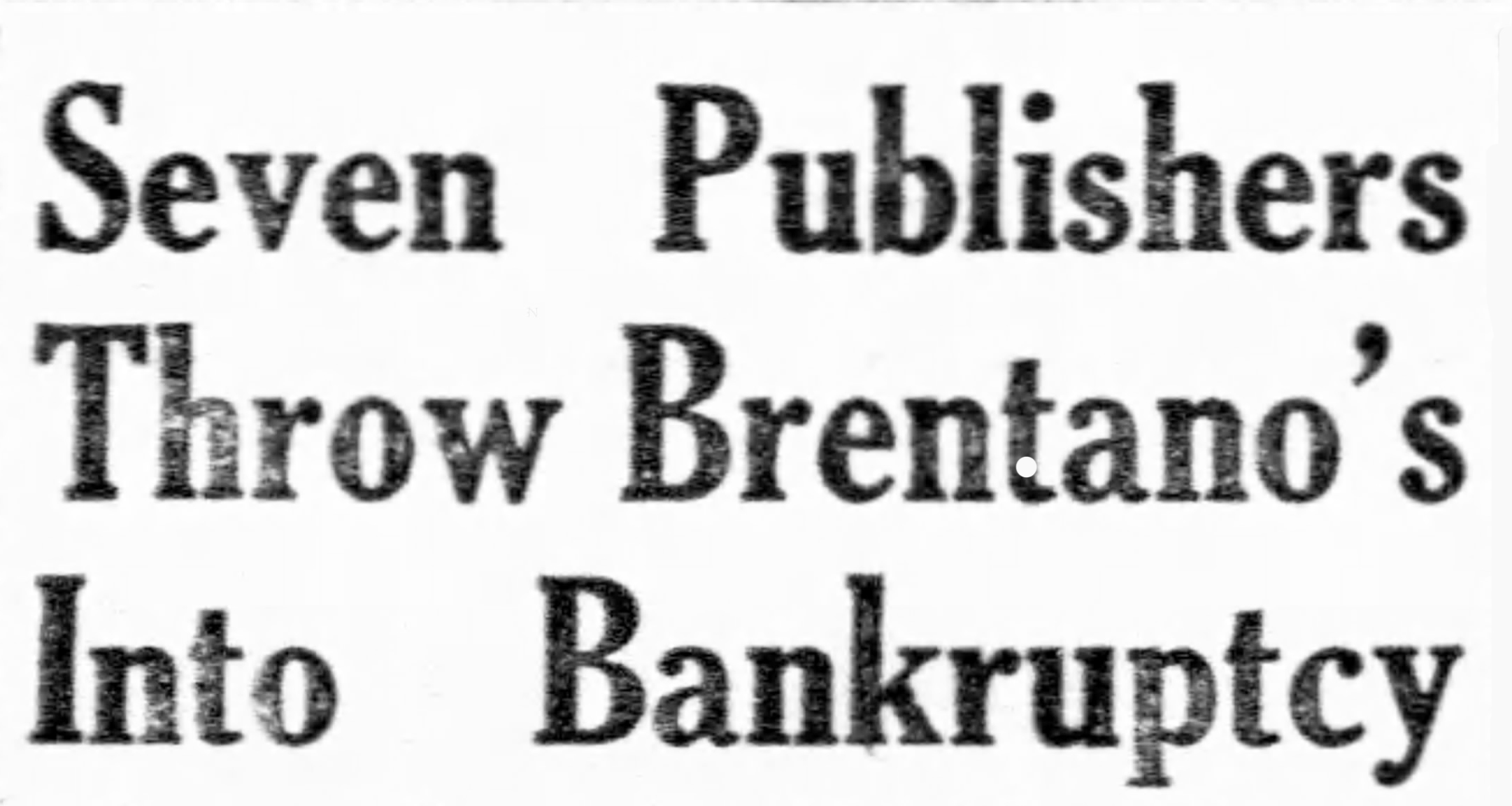 Filing of the petition and came within twenty-four hours of the withdrawal from the concern of three creditor– trustees who have controlled its affairs for three years.

John W. Hiltman,chairman; George P. Brett, secretary, and W. Morgan Shuster, stated upon withdrawal that they did not consider Brentano’s bankrupt but feared it might become so “through the short-sighted attitude of certain creditors, who, unfortunately, happened to be publishers.” 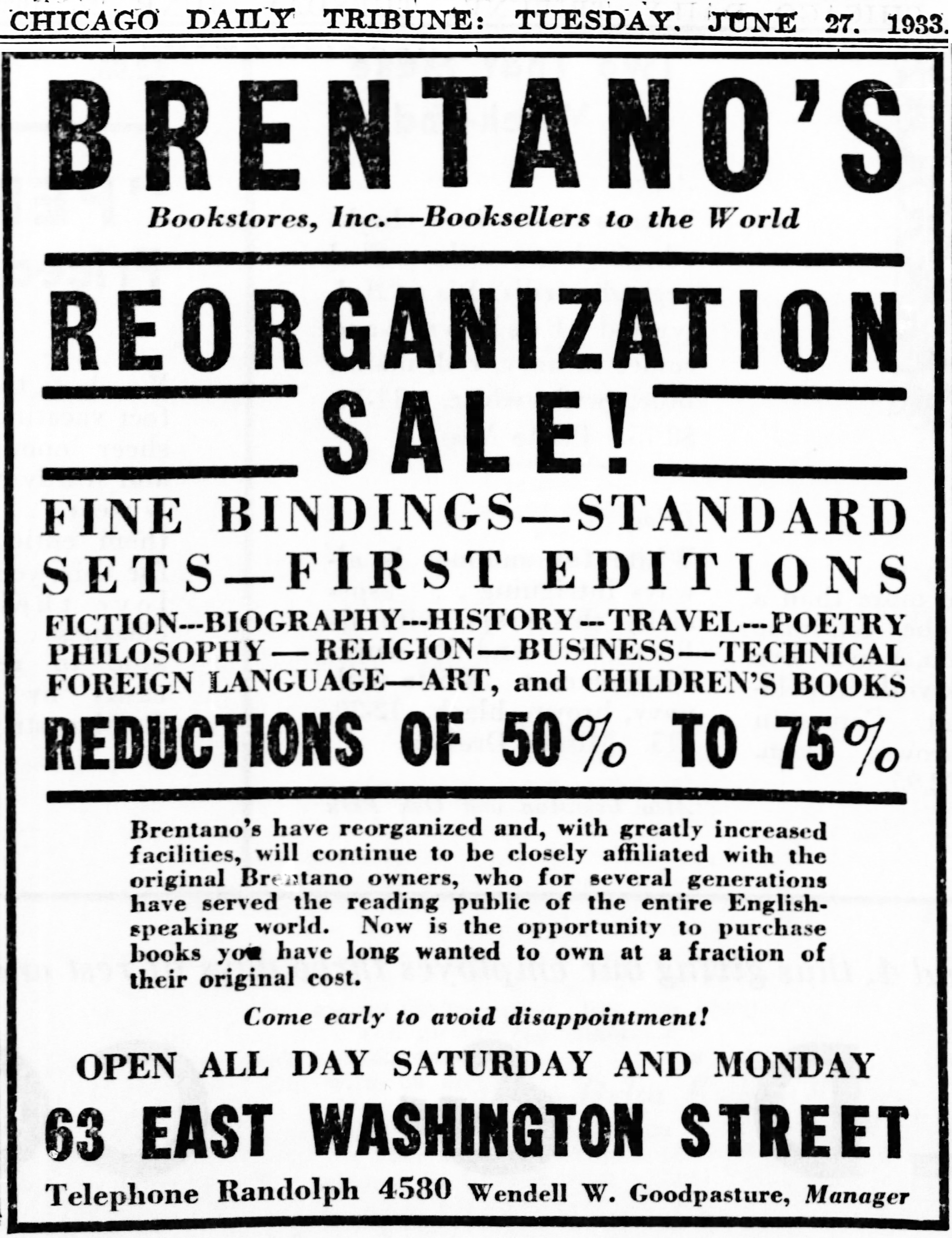 Signers of the petition in the United States District court, with the amount they say are due them were:

New York, June 18.—An appeal from the decision of Peter B. Olney Jr., referee, in knocking down the bankrupt book swelling firm of Brentano’s, Inc., at public auction to Adolph Kroch of Chicago for $121,000 will be taken by the Manufacturer’s Trust company, it isn announced by attorneys for the bank. They will seek to have the sale set aside on the grounds that it was not properly conducted, that the highest and best bid was not accepted, and that the creditors’ committee was not entirely composed of creditors.