REBUILT CHICAGO—THE NEW KENDALL BLOCK, THE WESTERN BUSINESS PALACE OF THE EQUITABLE ASSURANCE SOCIETY OF NEW YORK.
Among the many elaborate and expensive business structure now going up in the burnt district, none attract more attention than the new building now in process of erection at the southwest corner of Washington and Dearborn streets, by James S. Kendall, Esq., on the site of the old Kendall block, one of the early landmarks of the city. This magnificent structure is well shown in our illustration. The design is by the veteran architect, John M. Van Osdell, Esq., and the cost, when completed, will exceed $100,000. 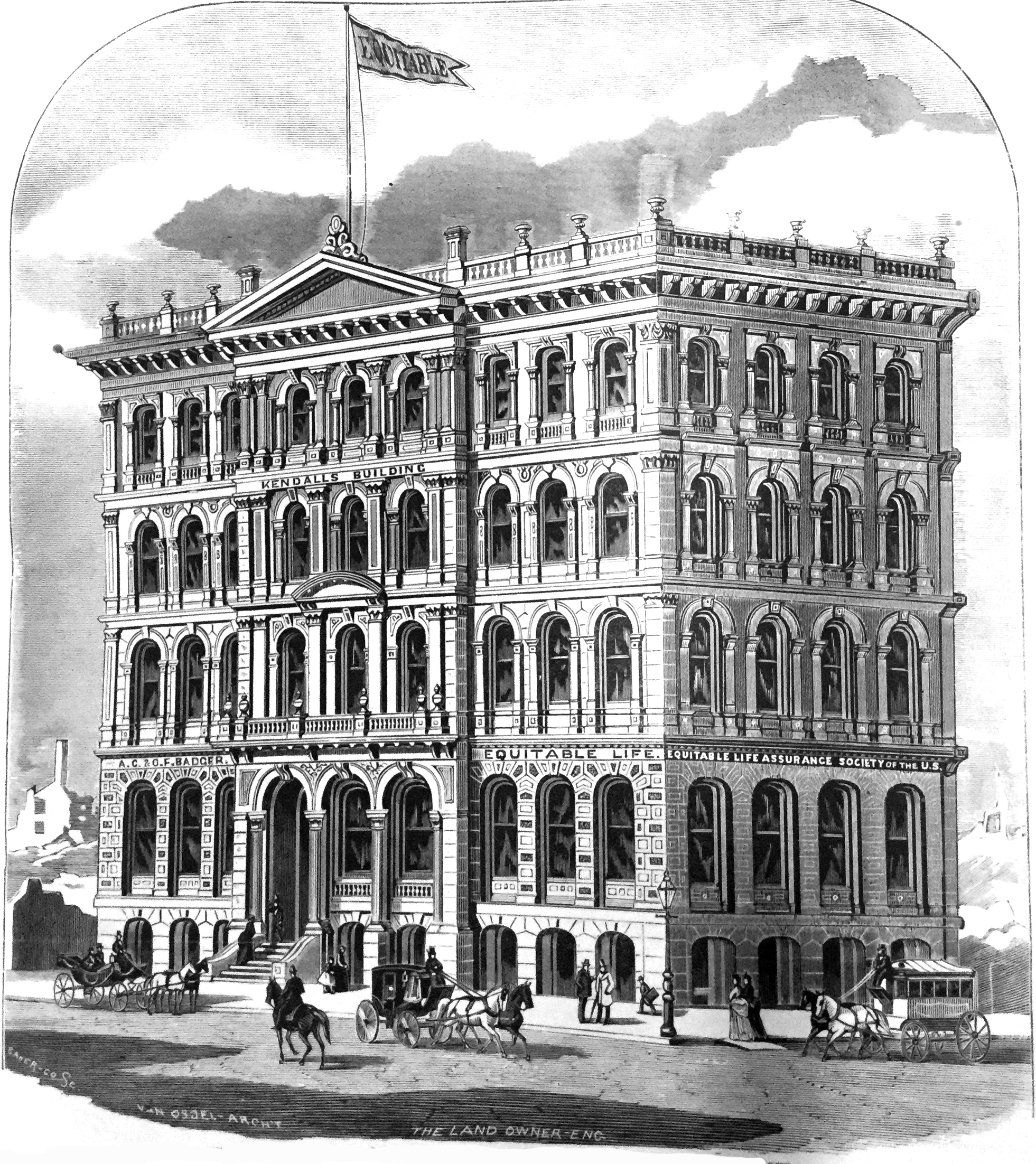 ARCHITECTURAL DETAILS.
This structure fronts 40 feet on Washington, and 90 feet on Dearborn street. It is five stories in height, including basement story. The two street fronts are faced with Ohio sand stone, from the Vlough quarries. The building will be fire-proof throughout, and the entire construction of the French roof will be of iron, with iron cornices, dormers, etc., while the flat part of the roof will be of corrugated iron. The partitions inside will be lathed with May’s patent iron fireproof lath. The interior will be finished throughout with hard wood. The main entrance will be from Dearborn street, with easy flights of stairs. All the windows in every story of the two fronts will have polished plate glass, and the whole will be heated by steam throughout. The general style of the architecture is Italian. 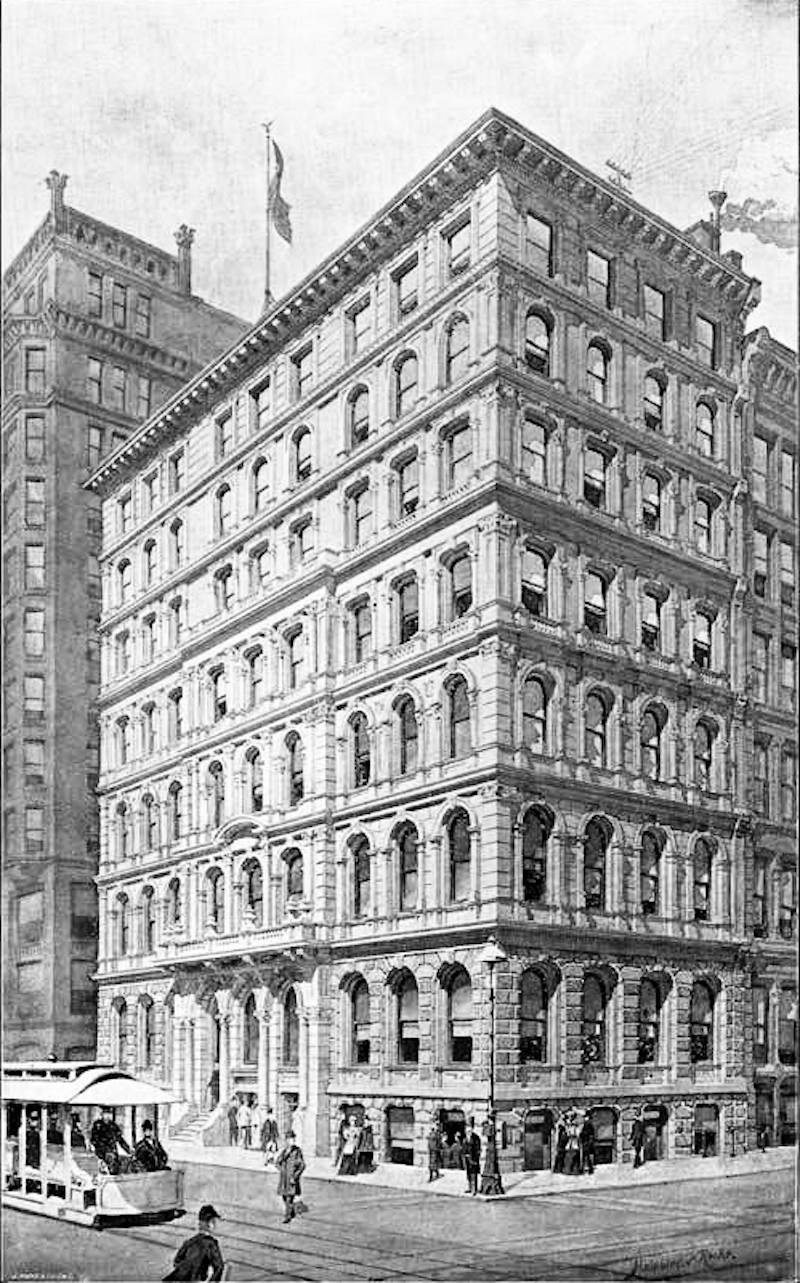 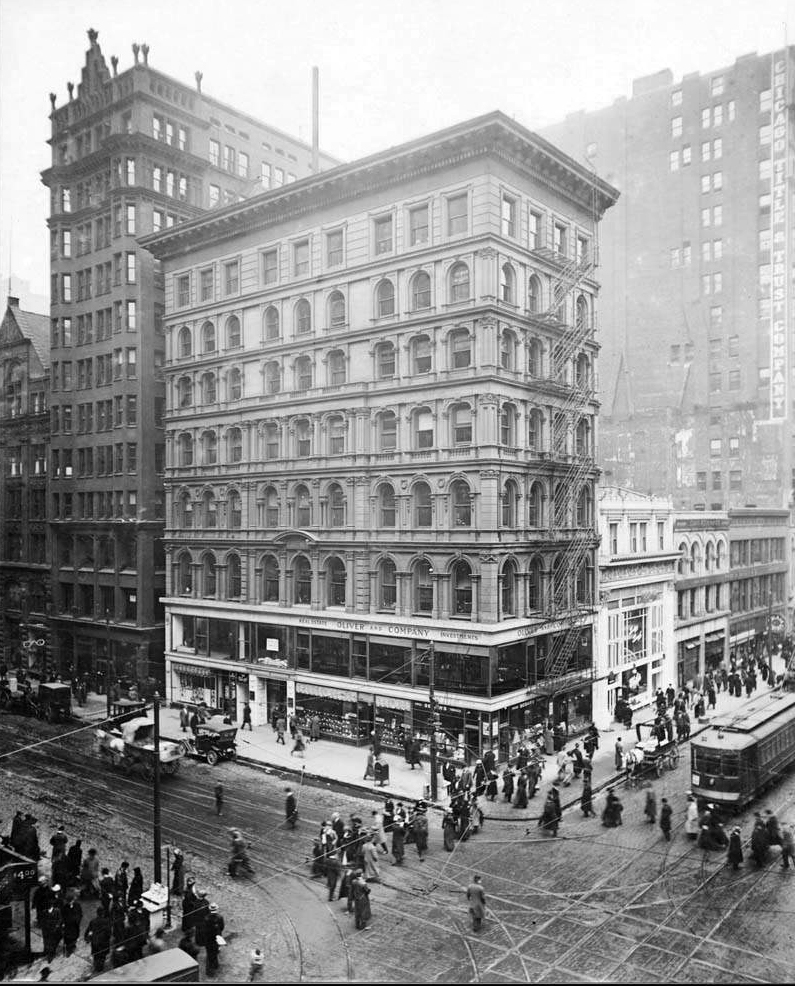 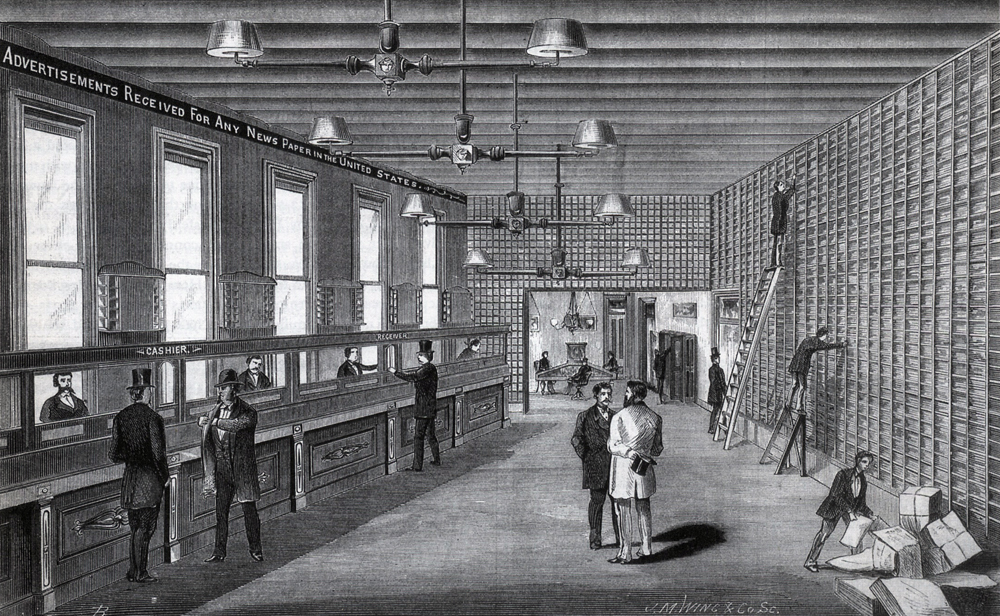 Advertising agency Coburn, Cook & Company was in the Kendall Building in 1874.

The ad agent was a space broker; ads were simple bulletins handed back and forth as commodities. Agencies operated like banks, with tellers (left), clients (center) and clerks (right). The clients paid a straight commission.

CHICAGO REAL ESTATE EXCHANGE building, at 40 N. Dearborn street on the southwest corner of W. Washington street, fronting 90 feet on the former and 40 feet on the latter, was the first “fireproof” building in Chicago. It was first known as the Kendall Block and then as the Equitable building. It was originally four stories and one basement high, on spread foundations.

In 1854, Orrin Kendall had constructed on this site a four-story bakery building. It was replaced by the second Kendall Block in 1871 but perished in the great fire of that year. John M. Van Osdel was the architect both of this building and of its successor, which was demolished in 1940 to make way for a new two-story building. The property has been acquired by the Chicago Title & Trust Co., which now owns the entire north half of the block except the Methodist Temple building.

This building was remodeled in 1893 by Holabird & Roche. 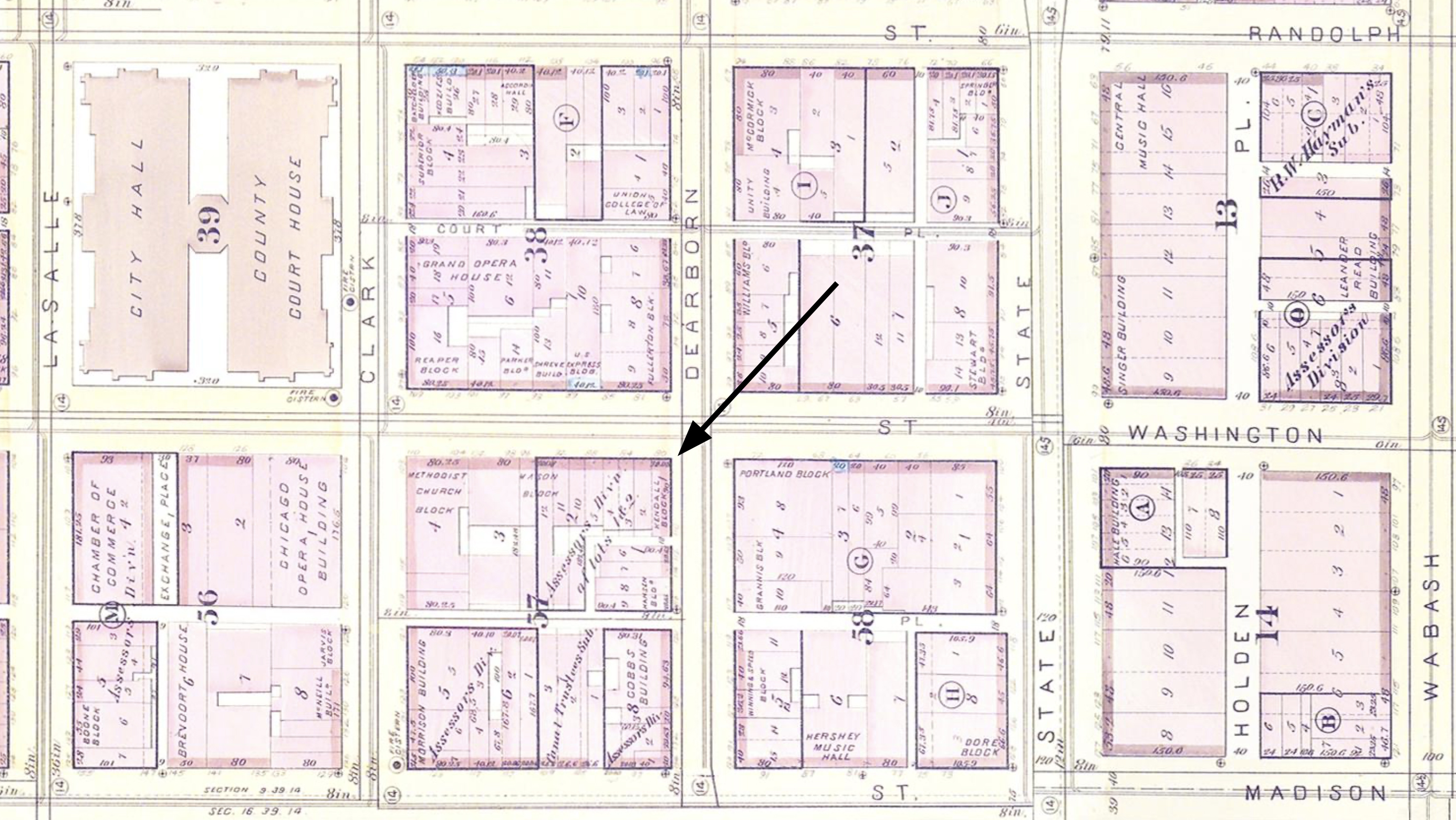 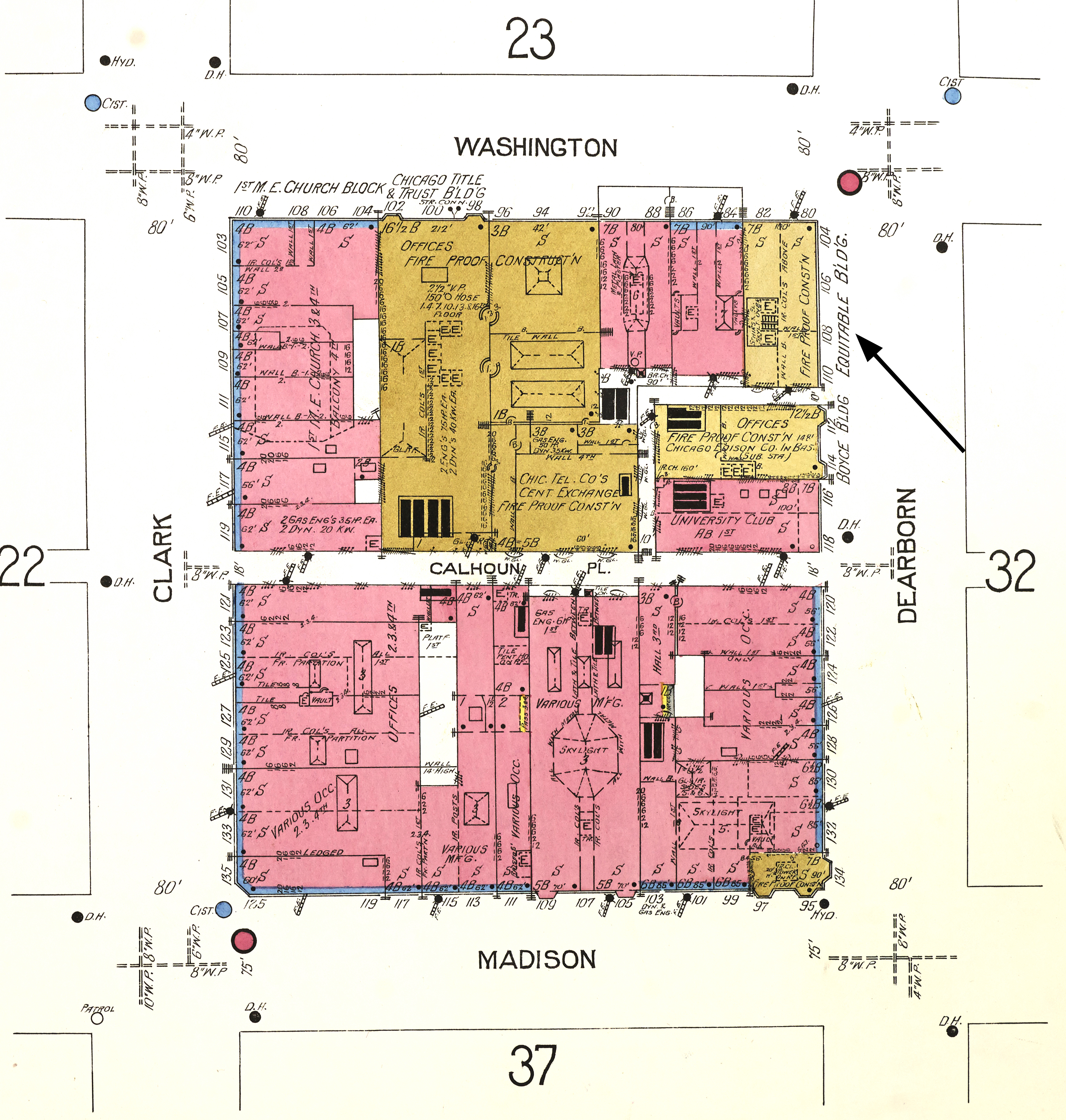