New St. James’ Church.—As it is possible before our next number shall be issued, this elegant church edifice will be opened for service, we have thought that a notice of it would not be unacceptable to the readers of the Record.

It is a matter of congratulation, not only to the congregation, but to the city of Chicago and to the Diocese, that we are to have at last a Church, whose costliness, dimensions and architecture will be worthy of the Episcopal Church.

The foundation of the tower only is built, and the church will be completed fully, without it at a cost of $60,000. It is designed to finish the first stage of the tower next year, and each of the other satges in each succeeding year, until the whole noble pile is completed, and the cross surmounts the spire. The capacity of the church will not be far from 1,200, which, judging from the overcrowded appearance of the present church, will hardly be too great, even at first.

The material is the fine Athens stone, laid in rock work.

The Architects are Burling & Bacchus, of Chicago. The windows, which are said to be not inferior to the finest in the country, are by Robert Carse, of Brooklyn. Each window, where informed, is to be the private gift of a single donor. Eight memorial windows are included in the number, and among them is Bishop Chase. The chancel triplet is composed of scenes in the life of St. James.

The organ, which is one of great power, has been built by Hall, of New York, at a cost of $4,000. We have heard that the vestry have made, or designed to make arrangements with Mrs. Bostwick, of New York, to take charge of the music of the service.

The style of the church is “the Early English,” with we should say an inclination to the “Decorated Gothic;” though throughout the whole edifice, architectural rules are made subordinate to rules of utility. The chancel, we are glad to observe, instead of being one-third the depth of the nave, is 18 feet deep by 40 wide, giving a long communion rail, and an altar visible to every seat in the church. The proportion of the nave is 66 by 100 feet. The organ, we are sorry to say, instead of being near the chancel, is at the old, useless position, over the front entrance.

The beams and tracery of the roof are really magnificent; we have never seen any construction superior. The rich blue sky-color of the roof is indeed beautiful—that of the chancel is studded with gold stars, which gives it a fine effect.

One thing that we like especially about the church, is its reality—there is nothing bogus about it—nothing painted to represent what it is not, but all simple, real, and elegant. On the whole, we think that it will be pronounced by the best judges, to be one of the finest churches in the country.

St. James Church.
St. James Episcopal Church, on the corner of Cass and Huron streets, is now being completed according to a design furnished by Mr. Burling. The design of the improvement is to bring out the front of the present church to the line of Cass street, and building a tower on the northwest corner, thus add to the length of the church thirty-four feet, and giving ea frontage on Cass street of eighty-eight feet. The tower is twenty-four feet square at the base, and will b e carried the whole height, 129 feet, in stonework. The south front of this new addition will be finished with a gable surmounted with a stone cross, the corners supported with heavy octagonal turrets.

The addition thus made in the front of the church will be two stories in height, the first story being 24 by 63 feet in the clear, and fourteen feet high. This will be used as a vestibule for the church, and will be made of marble, with all parts finished approximately.

Under this vestibule a vault will be constructed for the temporary reception of deceased persons belonging to the church. The second story will be arranged for social and other meetings, and will be reached by stairs through the tower, which will have an entrance from Huron street. The room will be twenty-eight feet high, finished with an open timbered roof. The ceiling will be decorated in a high style of Polychromatic painting. Large folding doors with stained glass will connect it with the main church, and the windows will be of stained glass, with memorial designs.

The architecture of the whole is English-Gothic, the walls being of Athens stone, laid up as rock-faced work—the doorways, windows, dressings, string courses, and other prominent details being made of Cleveland sandstone, which, being of a soft, greenish color, produces, in combination with the Athens stone, a very agreeable contrast.

The composition of the work exhibits great variety of outline and close attention to details, among which may be noticed the five lancet windows in the centre of the front, each fully and elaborately finished with columns, capitals, &c. This, with the lofty gable of the front, with its large and elaborate stone cross, the pinnacks, buttresses, and other accessories, will, without doubt, make the front of this church the most attractive architectural production of its kind in this city.

In addition to the above, important improvements have been made inside of the church. The old furnaces have been removed, and a new heating apparatus has been put in, which will no doubt properly warm the whole building. Another not less important improvement has been made in extending the organ gallery so as to allow the organ to be moved forward out of the recess in which it stood, thereby improving its sound and also affording more room for the choir. The whole cost of the work will not be far from $40,000, and it is expected to fully complete by December 1st. 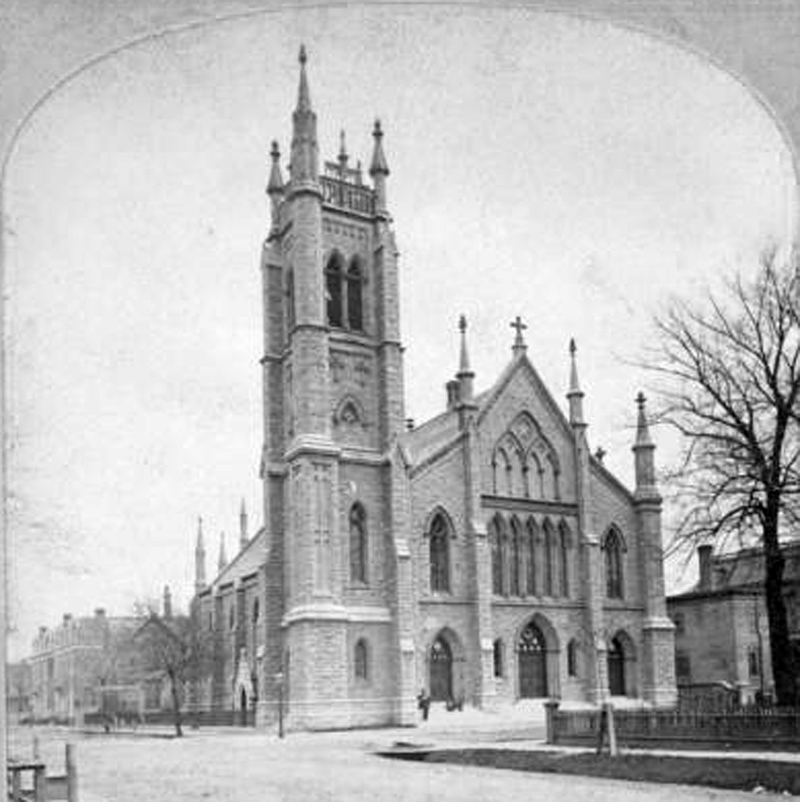 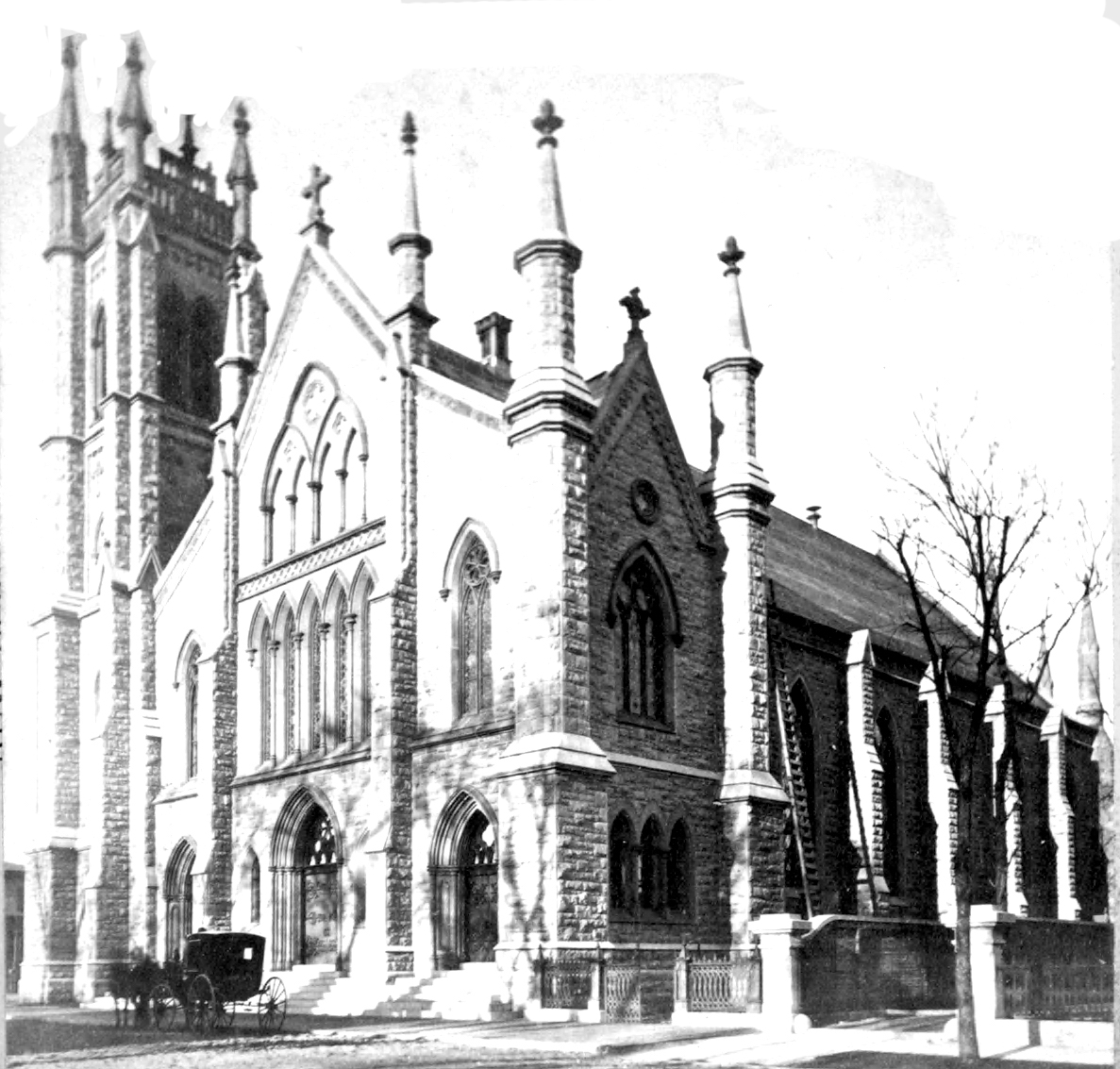 Steps were then taken to rebuild the church, and, plans being decided on, furnished by the well-known church architects, Messrs. Faulkner & Clarke, a large number of pews were sold in advance, and the work commenced. Fortunately the grand old tower, 140 feet high and about 25 feet square at the base, proved too solid to be destroyed, and though the bell was melted as it hung in the air by the intense heat, the tower itself remains, scarred, and, in some places, shattered on its exterior, but destined to stand through many future years as the “fire monument” of the North Side. 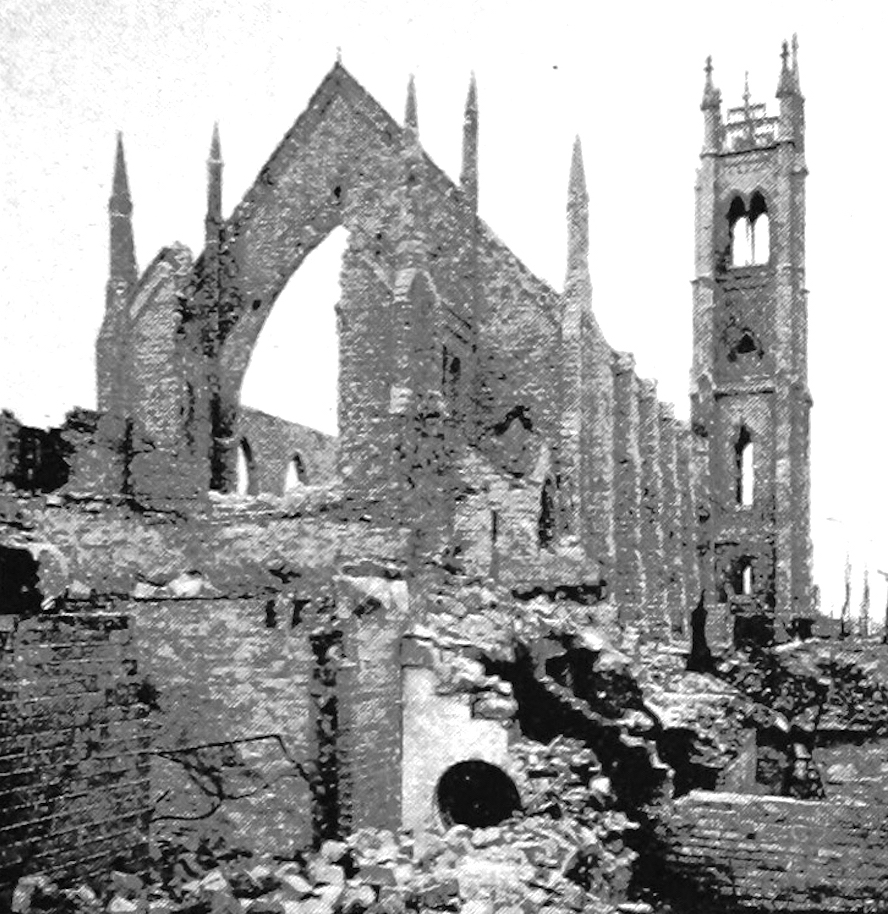 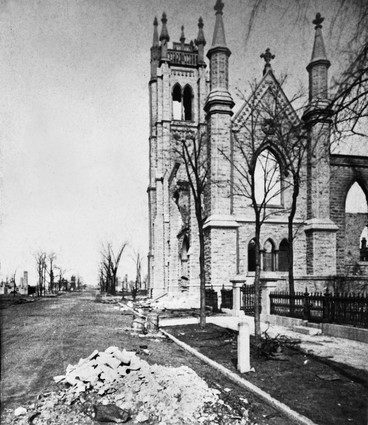 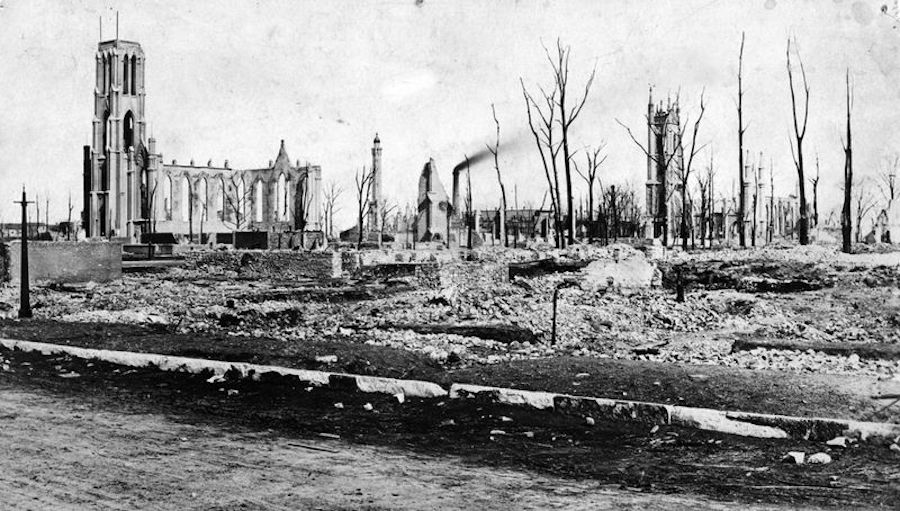 1The Chicago Record (1857-1862) Monthly. Edited by James Grant Wilson. Devoted to literature and fine arts. In March, 1862, Wilson disposed of the publication, and entered the Union army, where he became prominent. The Record was the pioneer paper of its kind in the Northwest. Changes in name and proprietorship took place, and the Record contimued until 1880.