Church of the Holy Name.
In 1846 the North Side was made a parish and placed under the charge of the priests of the College of St. Mary’s of the Lake. A small room was fitted up in the old college building, which easily contained the congregation that assisted at mass on Sundays. This was the origin of the Church of the Holy Name of Jesus. In 1848 a church building was commenced by Rev. Jeremiah A. Kinsella, who was at the same time rector of the college, and with whom there were associated the Rev. Fathers William Clowry and John Breen. This building was erected on the southwest corner of St. Mary’s College grounds, at the corner of Rush and Superior streets. It was completed in 1849, and was used for divine service for the first time on Sunday, November 18, of that year. The growth of Catholicism did not make itself especially manifest on the North Side until 1851, five years after the establishment of St. Joseph’s, and two years after the building of the Church of the Holy Name. By this time the number of Catholics had become considerable, and in this latter year Father Kinsella built a small church at the corner of State and Superior streets. This movement gave an impetus to the settlement of Catholics on the North Side, for it is a well known and noteworthy fact that the Catholics prefer to locate near a church, often making many sacrifices in order to do so. In 1852 an addition was made to the little church, but the Catholics increased so rapidly that the necessity of a large and permanent edifice was soon felt. Consequently in the year 1853 the Rt. Rev. Bishop Van de Velde assented to the erection of a large brick church at the corner of State and Superior streets, which should be used as the cathedral of the diocese. The ceremony of laying the corner-stone of the edifice took place August 3, 1853, at 4:30 o’clock p. m. The sermon was preached by the Rt. Rev. Michael O’Connor, Bishop of Pittsburgh. Bishop Van de Velde solemnly blessed the foundation stone. At the ceremonies there were present, in addition to Bishops O’Connor and Van de Velde, the Rev. Fathers McElhearne, Kinsella, Quarter, McLaughlin, Lebel, Tucker, Dunne, Fitzgerald, Clowry, Hoey, Feely, Brady, Kopp, and Donohue. The dimensions of the church were eighty-four by one hundred and ninety feet, and the steeple was two hundred and forty-five feet in height. The material of which the church was built was Milwaukee brick, the style of architecture was Gothic, with windows of stained glass, representing scenes in Biblical history. The building was completed in the fall of 1854, at a cost of $100,000. Catholics then living in Chicago contributed toward this enterprise with extreme liberality. The Catholics of the parish were gratified to enjoy the opportunity of celebrating mass for the first time in this church on Christmas Day, 1854. The Very Rev. Jeremiah A. Kinsella remained priest until January, 1855, when he, in connection with Rev. William Clowry and Rev. John Breen. was requested by Bishop O’Regan to resign. The removal of the clergy was not satisfactory to many of the parishioners, and on Wednesday evening, January 17. a meeting was held in North Market Hall for the purpose of expressing adverse sentiments. A series of four resolutions was passed, the substance of which was as follows:

1. Expressing confidence in the priests that had been removed.
2. Pledging themselves to assist in completing the new church, if the priests were permitted to remain.
3. Bowing with most profound respect and reverence to the Church and Bishop, but at the same time appealing to the Holy See.
4. Appointing a committee to draw up a statement of their grievences and forward them to the Pope at Rome.

The committee appointed under the fourth resolution consisted of Charles O’Connor, Patrick Connelly, John Murphy. Edward D. Colgan, Edward Kelly, James Driffy, Patrick McAlpin and John Prindiville. Late in the year 1855 Charles O’Connor brought suit against the Rt. Rev. Anthony O’Regan, Bishop of Chicago, to recover under a contract which the plaintiff had made with a Catholic clergyman, formerly of the city, to build the Church of the Holy Name. The defendant denied all knowledge of such contract, as well as having authorized any party to make such contract for him, but at the same time admitted having offered to pay the plaintiff a fair and reasonable price for the labor expended on the building. On the 6th of November, 1855, a verdict was rendered the plaintiff of $6,263.96. It was decided to take an appeal to the Supreme Court, but no decision on the subject can be found. 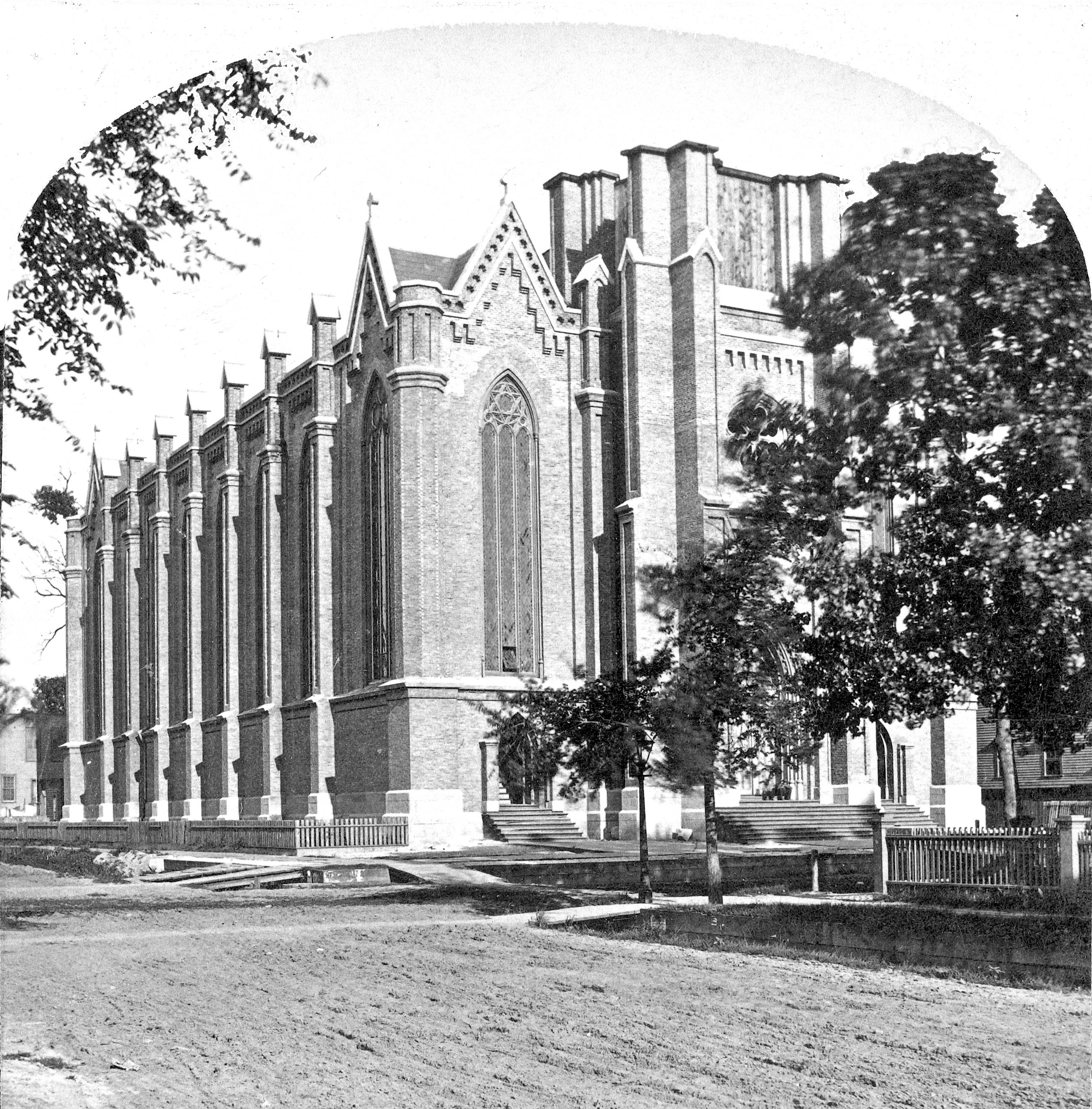 Cathedral of the Holy Name
John Carbutt #136
About 1869, before a second story was added

ALTAR CONSECRATION AT THE CATHOLIC CATHEDRAL—The consecration of the new altars at the Church of the Holy Name Cathedral, yesterday was the occasion of a most imposing and impressive service. Th Right Reverend James Duggan, D.D., Bishop of the Diocese, delivered ann eloquent discourse from Matthew 5th chapter, 20th to 24th verses.

Rev. Dr. Butler acted as celebrant, Rev. Dennis Dunne, D.D., officiated as assistant Priest, and Rev. Dr. McGovern was master of ceremonies. The music was rendered on thevgrandest scale by the orchestra of the Philharmonic Society, and consisted of “Hummel’s Second Mass in E Flat,” and “Ave Verum Corpus’ from Mozart. The altars have been erected at a cost of $4,100, and were executed by the eminent artist, Buscher. They were commenced about two years since, are of black walnut, and consistent in their design with the Gothic architecture of the church. The fronts of the altars present three richly carved medallions, representing the birth, resurrection and ascension of our Lord; above are niches for the twelve apostles, which are at present vacant, but will shortly be supplied with the appropriate statuary. The altar to the east is dedicated to the Savior; the north to the Virgin Mary, and the south to St. Joseph.

The church was crowded on the occasion, and a collection was taken up which realized $1,500.

The Church of the Holy Name is wrecked all but the spire. That solid piece of work stands as good as ever, and the new story recently added by Frank Agnew shows by its substantial appearance that it was the work of a faithful and skillful mechanic. About a month ago Mr. John Donlin began the framework of the upper portion of the spire, which reached a total height of 260 feet. It was ready for slating, but the fierce wind of Monday night, aided by the fire, blew it down, and it is rumored that six men were injured by the falling timbers. 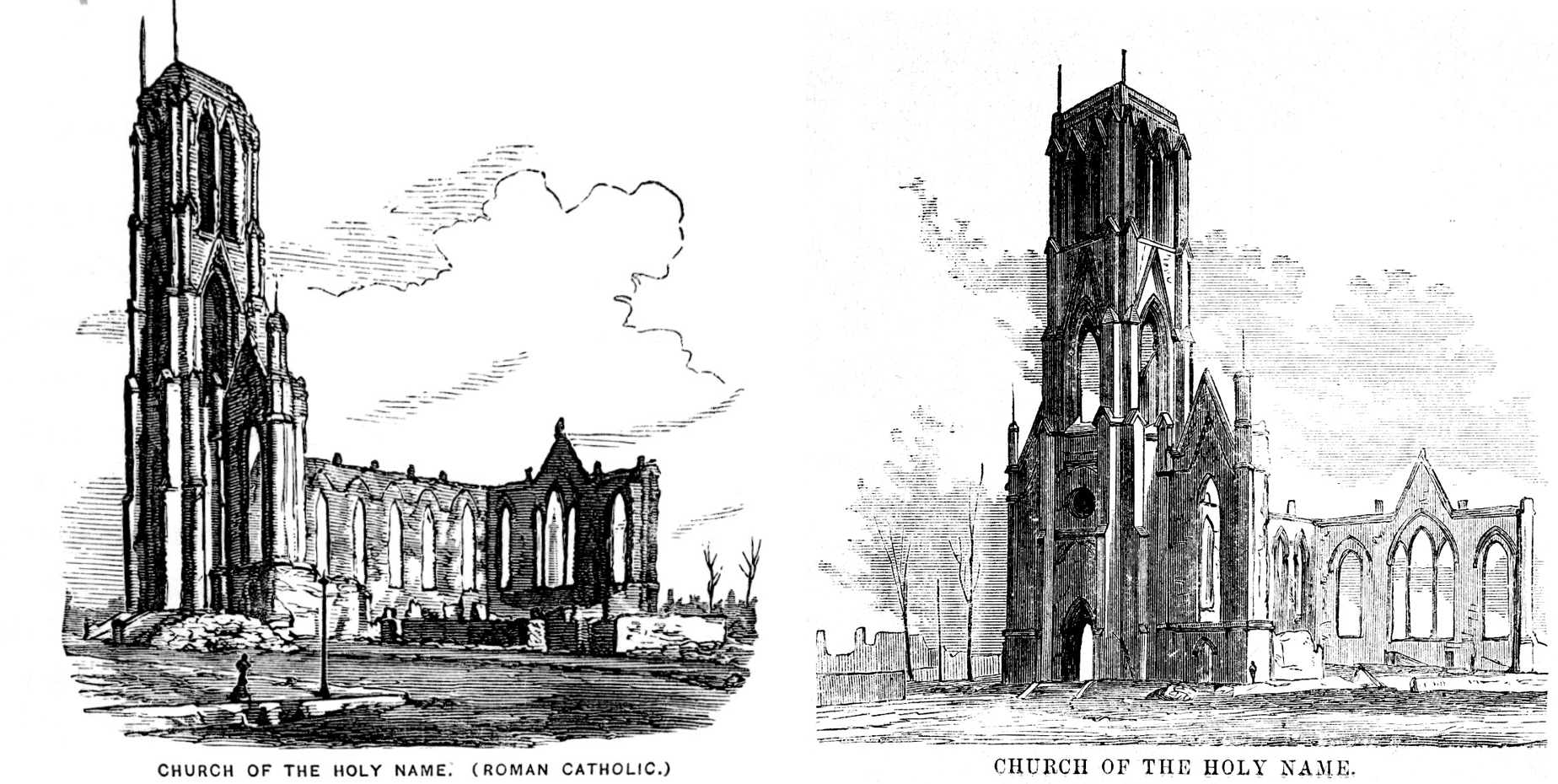 Church of the Holy Name
After the Great Fire of 1871

THE HOLY NAME.
The Roman Catholic Cathedral of the Holy Name, which was located on State and Superior streets, a very large building, was entirely wiped out by the great disaster. Hardly anything remains to indicate where its imposing spire once soared toward the clouds. The congregation now bend to heaven in a very humble wooden contrivance, situated opposite their old site. Nothing definite has yet been done in the way of restoration. The Catholic colony in that region sufferd very heavily, but the diocese is rich, and, doubtless, the edifice will not be delayed for any lack of funds. Meanwhile, be it observed, the congregation has been always noticeable for its generosity in church matters. It is stated that the new building, when it is undertaken, will be rendered in every respect worthy of the premier church of the Catholic community in Chicago. 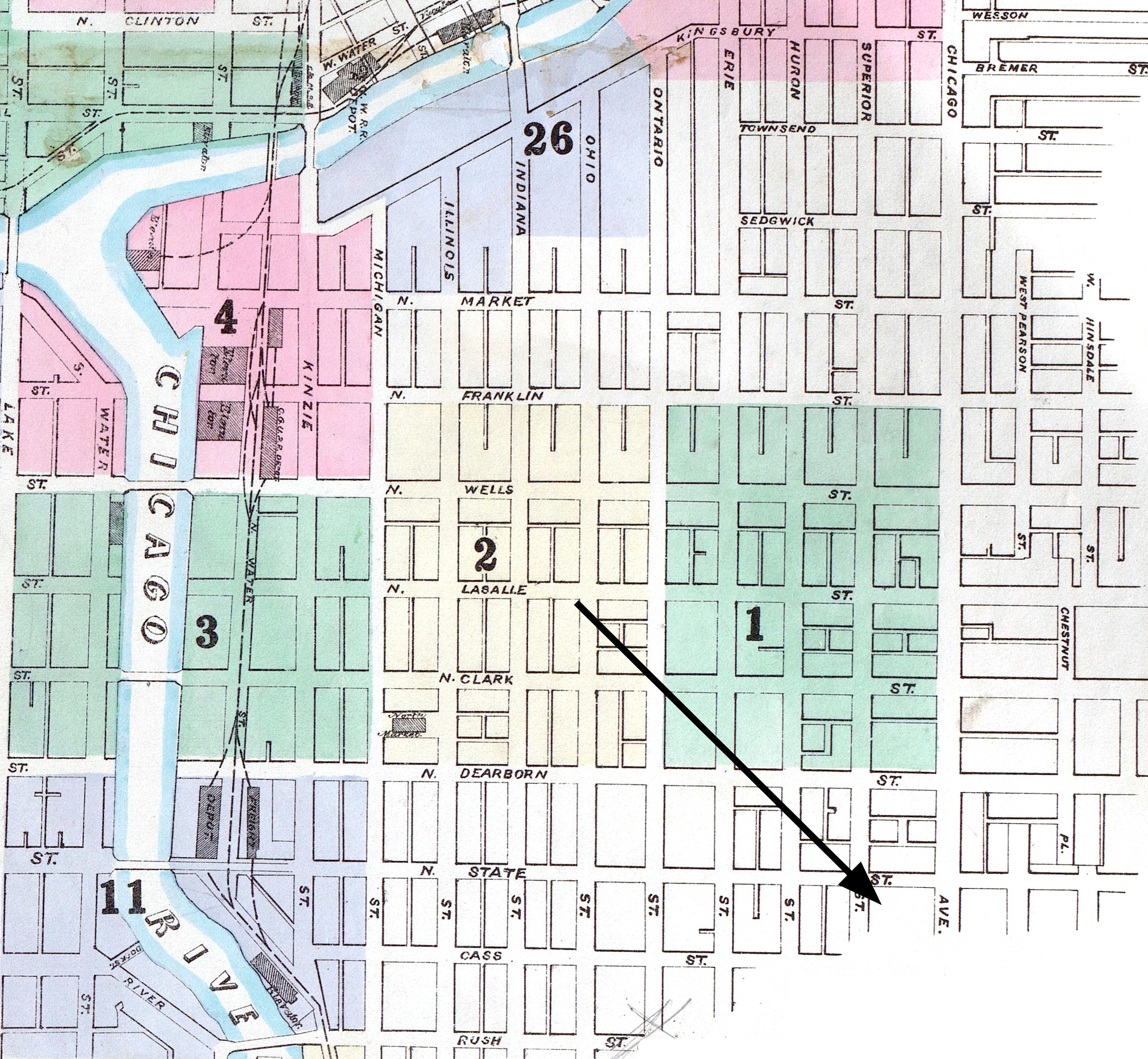 Unfortunately the 1869 Sanborn Map of Chicago did not include the block which the original Cathedral of the Holy Name stood, the overview map did.