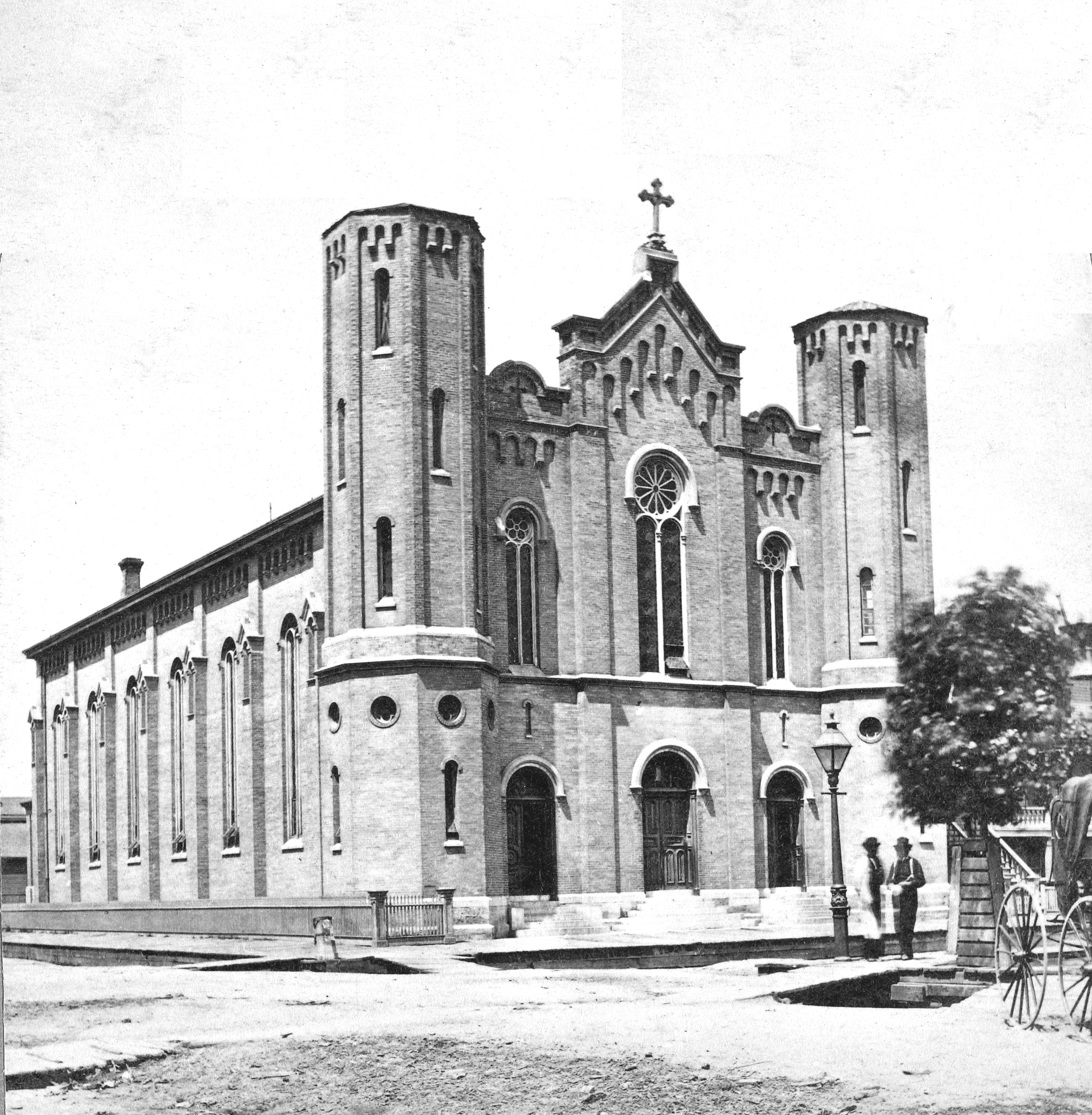 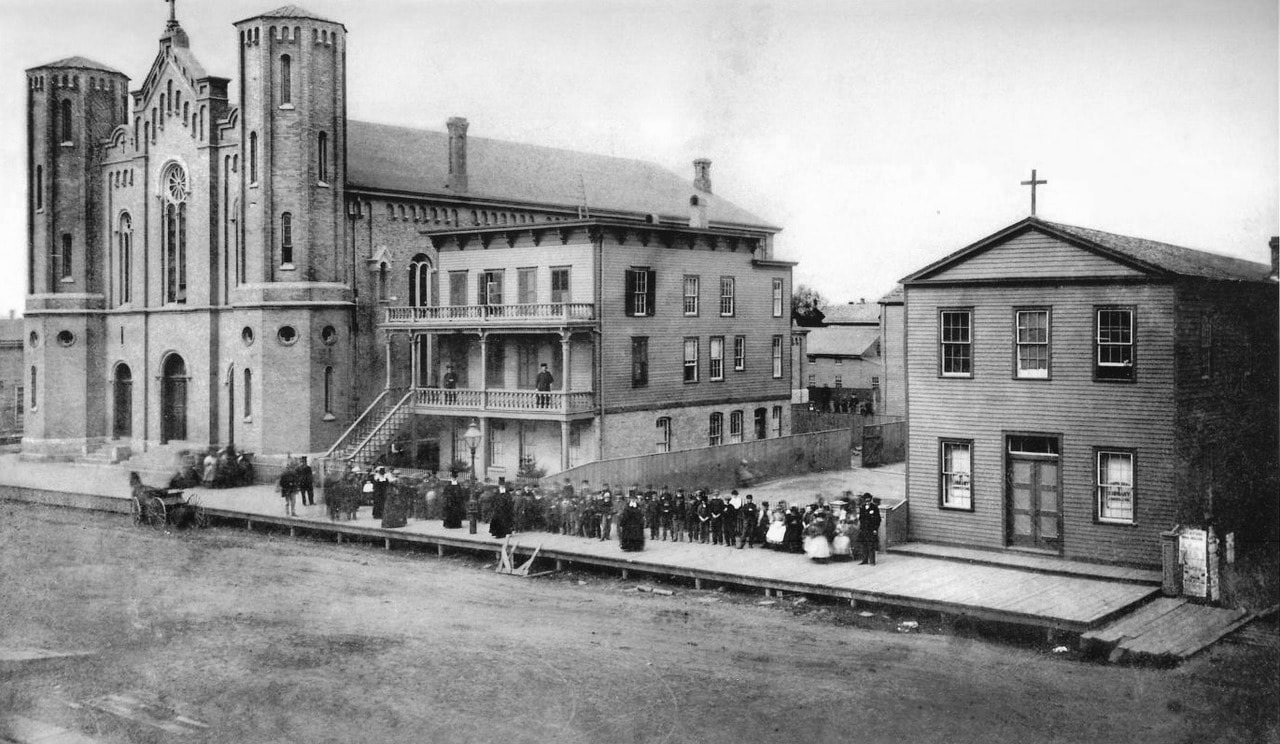 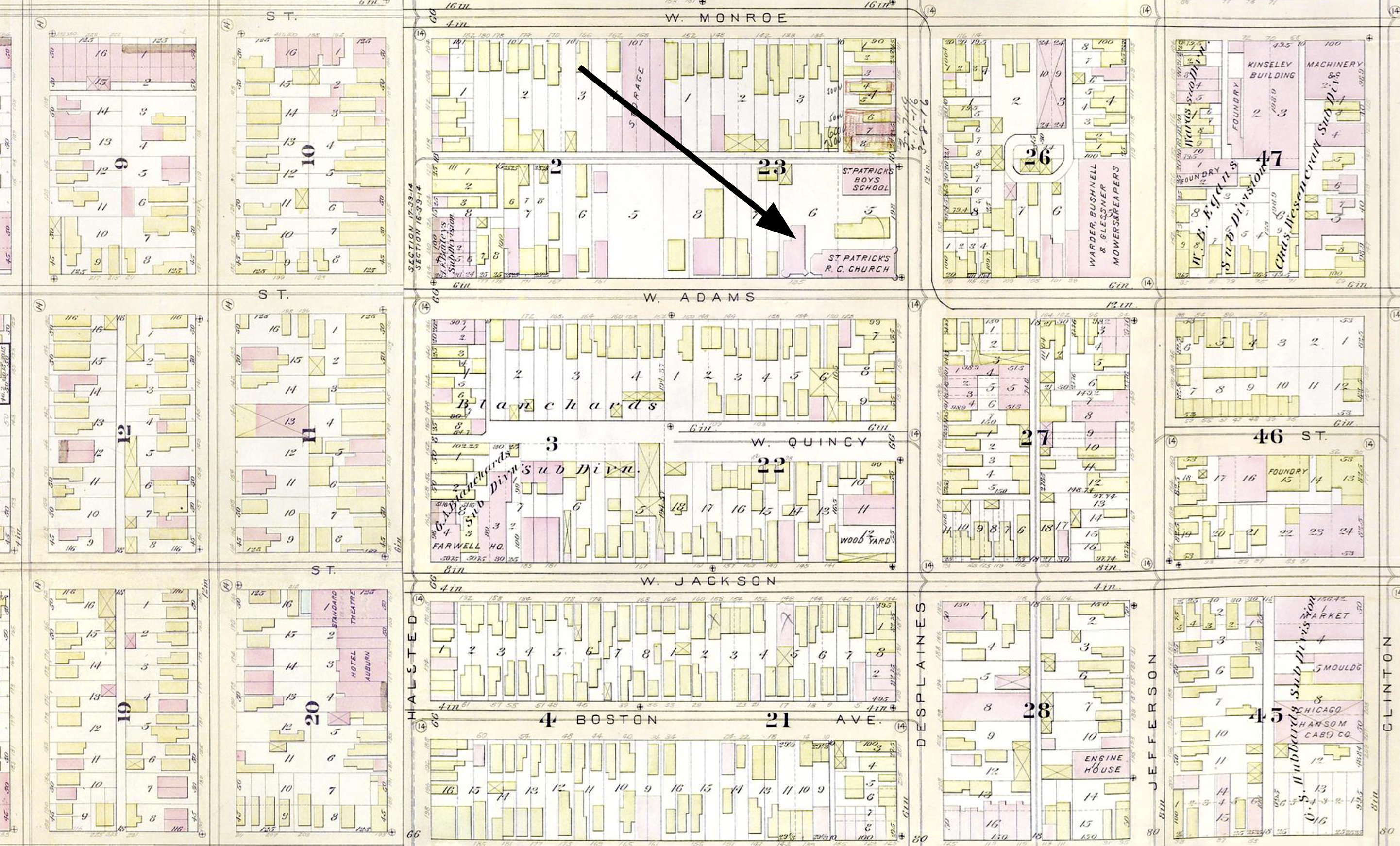 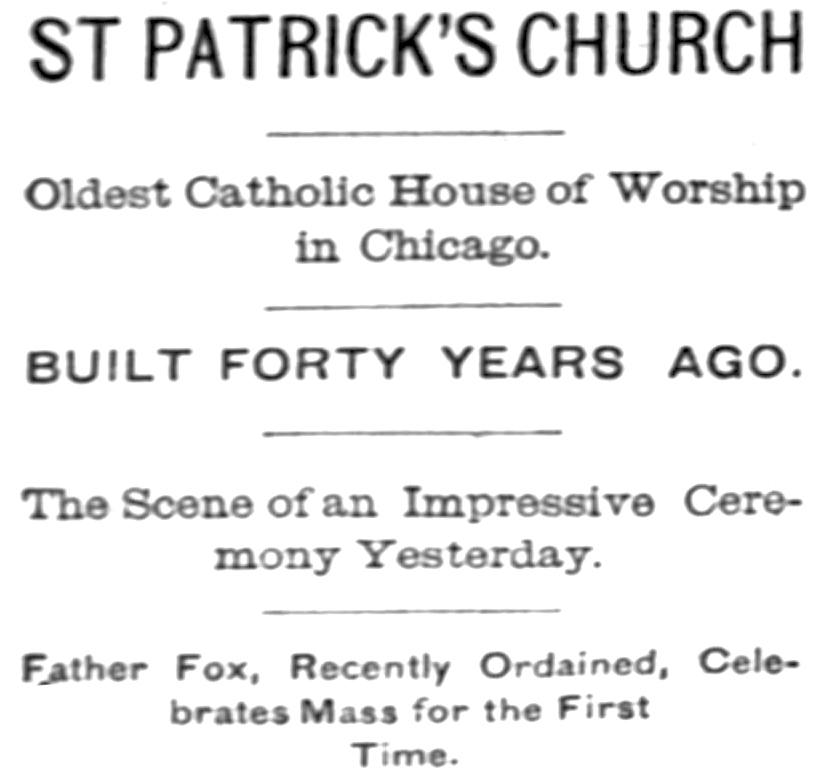 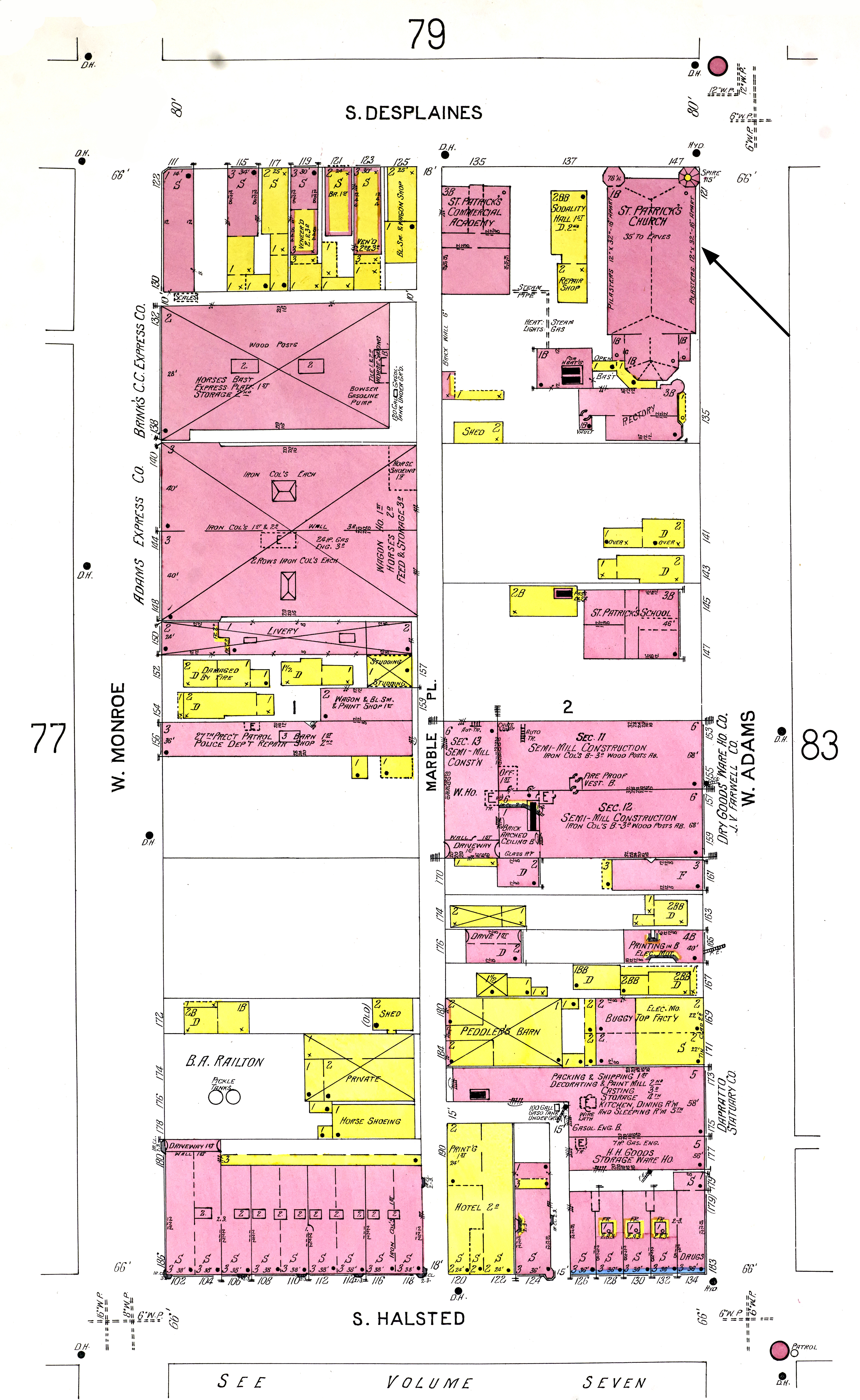 Sometimes a new heart helps you feel giddy again. Over the last several years, the Chicago architectural firm of Booth/Hansen & Associates has given Old Saint Patrick’s Church this treatmentwhich has made many people feel good.

Standing just west of the Loop at 700 W. Adams St. since 1856, Chicago’s oldest church building is built mostly of Milwaukee common brick. St. Pat’s was not in harm’s way when the Great Fire burned the city to the ground in October of 1871. Almost a century later, in 1964, shortly after the Kennedy Expressway cut away its neighborhood, Mayor Richard J. Daley presided at a celebration of Old St. Pat’s new status as a Chicago landmark. Today it stands proudly, a survivor.

Among unique aspects of Old St. Pat’s are its two octagonal towers, completed in 1885. The steep, pointed south spire represents the Church in Western civilization. The north tower, with its Byzantine-inspired onion dome, represents the church of the East. Together they symbolize the universality of the Catholic Church in a city once dominated by immigrant Irish, Polish, Italian, Bohemian and German Catholics. In the course of the 1880s, the English-speaking parish of St. Patrick became populated mostly by Irish people; it is their national interest that has determined the interior decoration of the church. 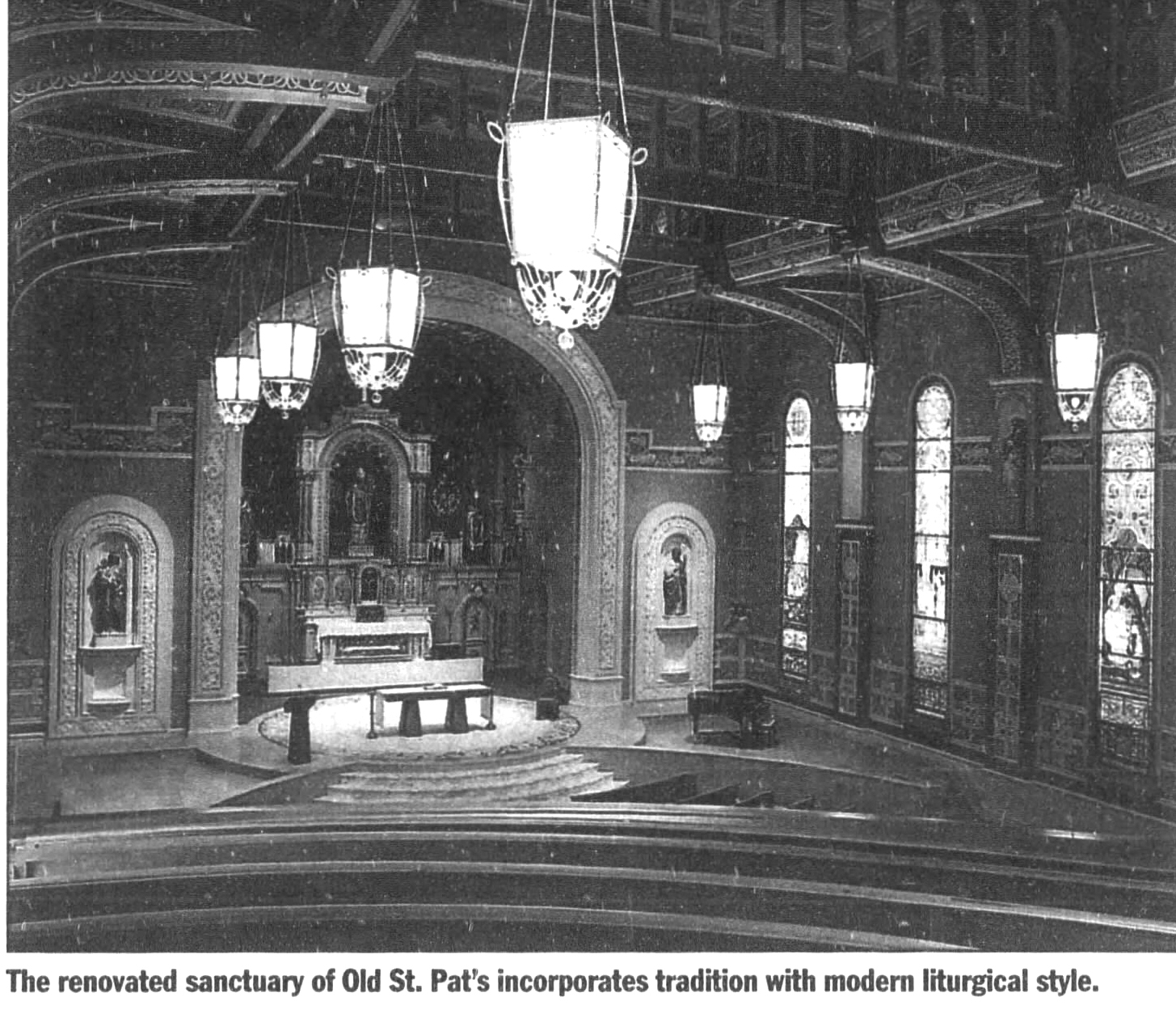 Immediately after his appointment as pastor of St. Pat’s in 1911, Rev. William J. McNamee began to redecorate. At the center of the program stood the master craftsman, Chicago artist Thomas A. O’Shaughnessy. For the first time in Chicago, a Catholic Church was decorated entirely in the ancient Catholic art of the Irish. The design work of 1912-1922 brought St. Patrick’s to the heart of city life and made it the cornerstone of American-Irish art. Known as the Celtic Revival in Ireland, this nationalistic art movement stressed ancient Celtic links to Catholicism. Understandably, the movement found strong support in the United States.

O’Shaughnessy, a meticulous craftsman, created fabulous interlace ornament (lacy lines symmetrically entwined) in paint and glass styled in part after illuminations found in the late 8th Century Book of Kells, one of Ireland’s great national treasures. Within a decade, Celtic Revival’s entwined bands, lines, dragons and long-tailed birds snaked across the walls and windows of St. Pat’s in determined harmony.

This amazing set of windows is arguably the finest of its kind in the U.S. Thousands of precisely cut and delicately hued areas of glass, separated by hairlines of lead, copper foil and bronze, are assembled in an unsurpassed spiritual imagery–all to honor the memory of Terrance McSwiney, the lord mayor of Cork who had died in a hunger strike the previous year in the fight for Irish independence from British rule.

After nearly 150 years of serving the community–the parish was founded in 1846–St. Patrick’s interior had seen it all, from glory to dereliction. With hundreds of new parishioners filling the pews, the parish and the archdiocese deemed it time for change. Following guidelines for changes authorized during the Second Vatican Council in the 1960s, Booth/Hansen transformed the interior into a showcase of end-of-20th-Century aesthetics. With the help of the Richard H. Driehaus Foundation, money was raised; then the old altar was scrubbed and original stenciled wall ornamentation was uncovered.

The muscular pastels of O’Shaughnessy’s nave windows echoed across the freshly painted walls. Re-created interlace joyously hinted of other colors and times. All of this was set aglow by brass and white glass modern hanging lanterns somehow reminiscent of the art of Charles Rennie Macintosh.

Beasts entwined in symmetry were a mainstay of Celtic sculpture; their flour-white kin in Old St. Pat’s guard the great arch and dominate the sweeping sanctuary. Shades of exotic sand colors in the marble floors continue the abstractions into the sanctuary, whose centered altar is a focal point of services. The church’s postmodern faithful–from communities throughout the Chicago area–gather on serpentine pews of cherry, inspired by the words and the visions and by what they see. 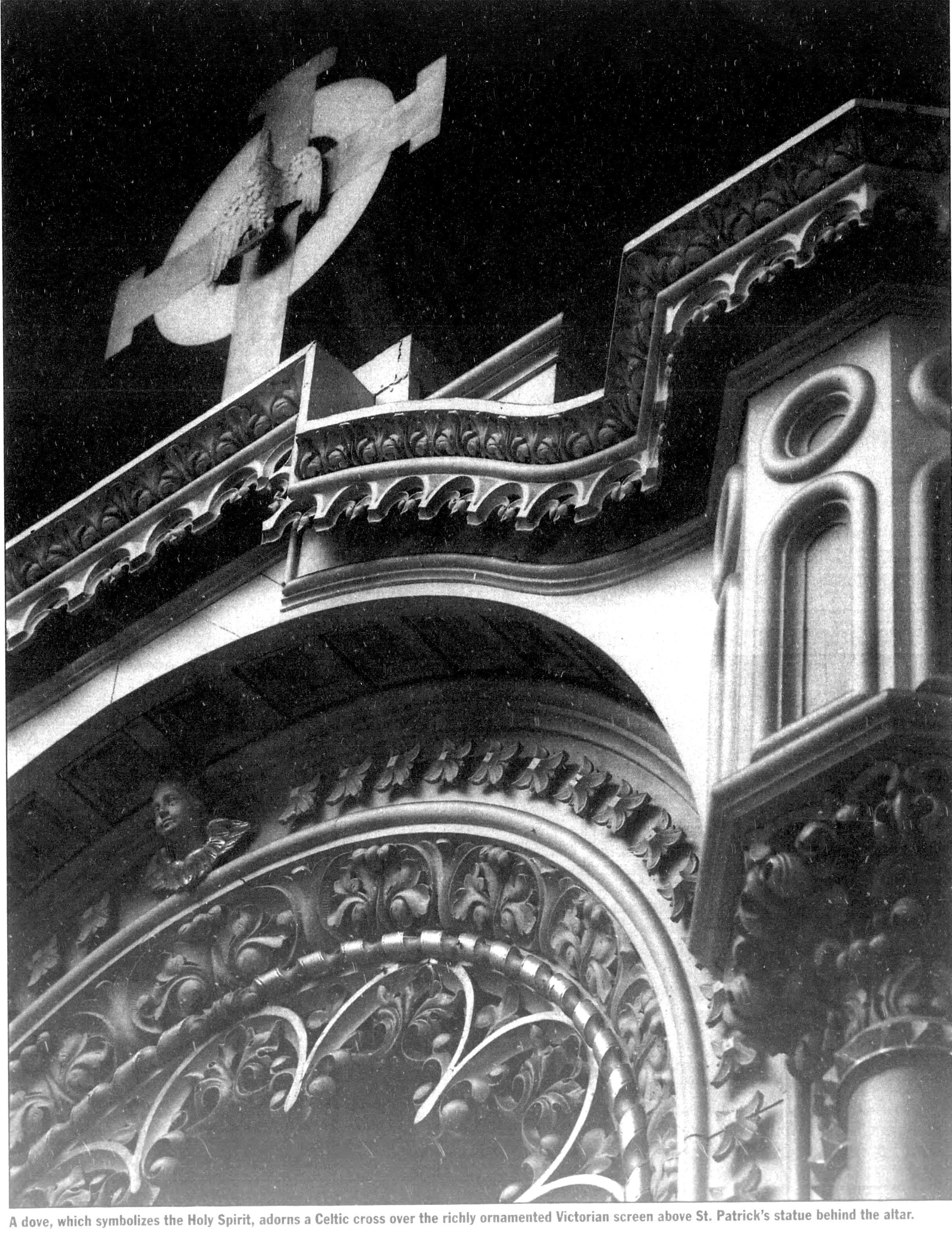