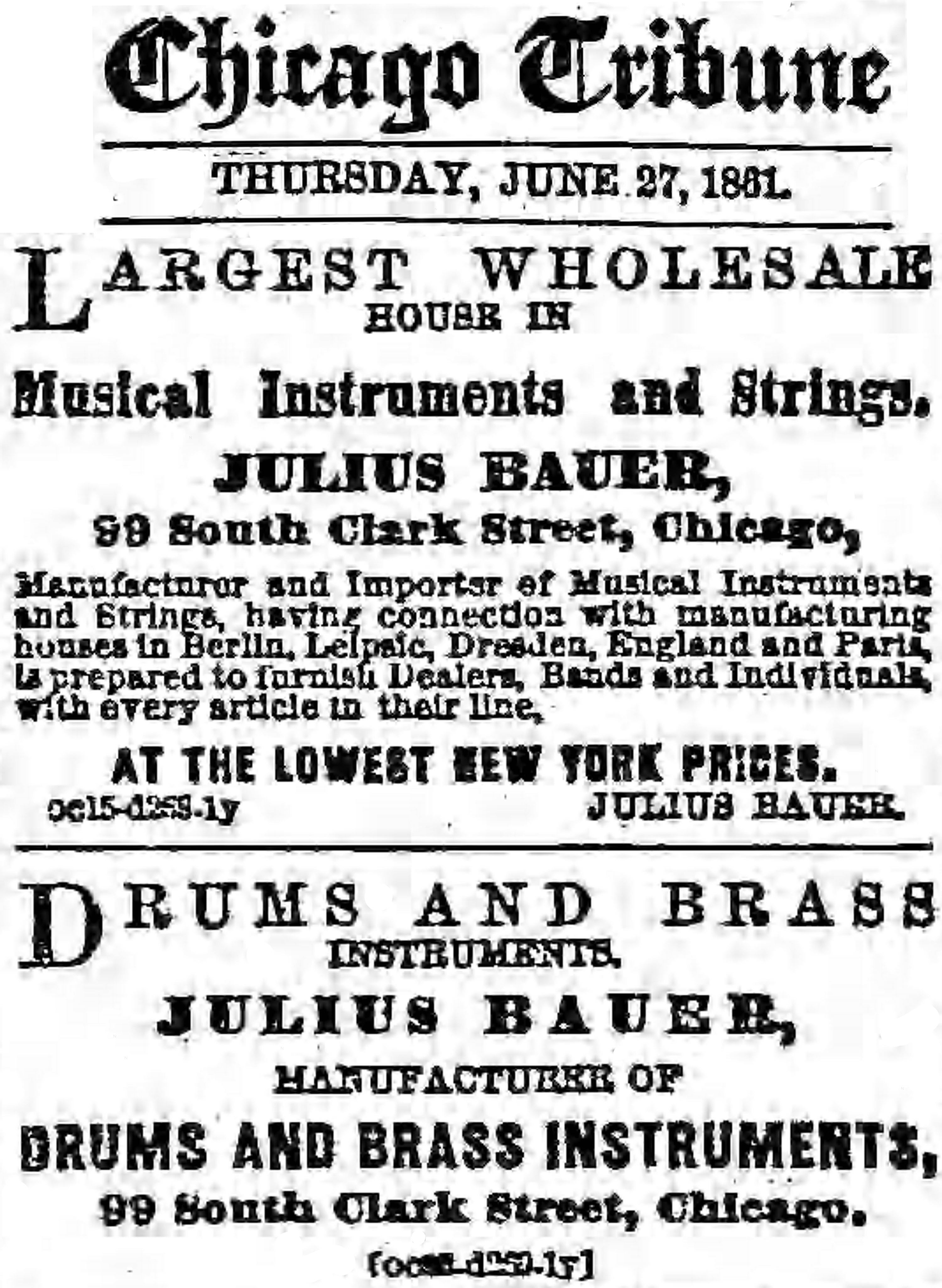 MUSICAL INSTRUMENT MANUFACTURE.
There is nothing more encouraging to our artistic life, than the progress of the Fine Arts in this country. It is encouraging, because we see rapid progress in all directions and it is affecting, too, because we find that every branch of required heroic perseverance and prolonged sacrifices of the early apostles, who have led the way to a period of more refined taste in everything that adorns and embellishes civilized life. Mr. JULIUS BAUER, No. 99 Clark street, opposite the Court House, had long been associated with one of the great musical manufacturing houses at Leipsic, so well known to the musical world. From time to time large orders from America were received in Leipsic, and it was believed that the demand here would warrant the establishment of a manufactory, and Mr. Bauer, after visiting several of the large cities in this country, resolved to locate in which he did in 1857, since which Chicago, time he has prosecuted the manufacture here with great success. The Musical Instruments that are made by this house (which is the only establishment of this kind in Chicago,) comprise Melodeons, Accordeons, Concertinas, Violins, Flutes, Guitars, Drums, Tambourines, Banjos, and German Silver and Brass Band Instruments. All of these articles are of a superior quality, having never been surpassed in tone, finish and construction by European manufactures for Mr. Bauer supervises every Instrument made at his establishment. He is now furnishing Instruments of his manufacture to music dealers in Cincinnati, St. Louis, and indeed to nearly every dealer in this Western Valley. and lovers of music this Composers, performers, throughout section, have written their unqualified commendation. Mr. Bauer is supplying the Government with nearly all the Instruments for the Army of the “West. The Concertina is a new instrument, somewhat similar to the accordeon, though its construction is stronger, and by an echo attachment similar to the pedal of a piano, the tone may be sweet and delicate as that of a flute, or changed to the deep and powerful volume of the organ, or may present the effect of a full band. His Drums are sold in large quantities to New York and Philadelphia dealers. It is said they cannot be beaten by any in the world. There are two kinds of these, one of which has a patent contrivance for straining the head of the Drum to a uniform tightness. 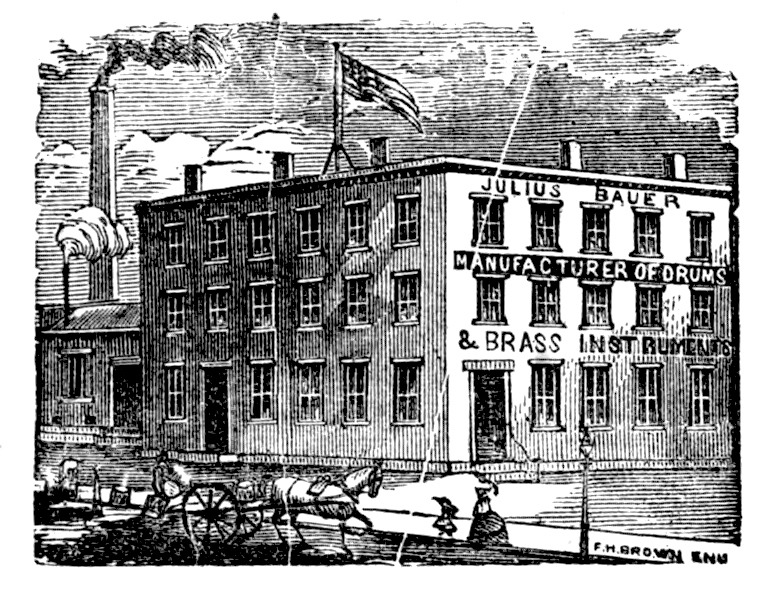 The Violins and Guitars manufactured by Mr. Bauer, are of a peculiar construction. The two extremities of the body of the instrument are so connected as to increase its strength beyond the old system, and the sound-board is left perfectly free and elastic in all its vibrations. The strings are so fastened, that a single note, instead of appearing to come from the string, with a vibration from the sound-board, is more like a gush of melody, poured forth from the whole instrument. It gives forth sounds deeper, richer, and prolonged into more voluptuous strains, the first time it is struck, than the old instruments of former years. The Guitar can be traced far into antiquity. The name itself is derived from the Greek. It is one of the most touching and inspiring instruments and aroHnd it is woven a net-work of tender associations, which belong to the history of love and passion in moonlit hours, from grove and river’s bank, and castled balcony; from the cold North in its genial summer season ; and the purple South, where the arctic winter never comes, and the light of the tropics blushes eternally.

During the few years that Mr. Bauer has been engaged in business in this country, he has received Medals in Gold, in Silver and Bronze, from State, County, and United States Fairs. He is winning a reputation in his business which entitles him to implicit confidence; so that in the purchase, the sale, or the exchange of one Musical Instrument for another, or in procuring any Musical Instrument which can be had in the world, he can be safely confided in; for his connections with houses in Berlin, Leipsic, Dresden, Paris, and other places in Europe, are such as to enable him to produce them in the shortest time, and at the lowest prices. His Music Store is one of the most attractive spots in this for the lovers of this elegant art, which has thrown its enchantments over the homes of the refined and the cultivated classes of every nation, and which seems destined to command in this country wide, if not a universal influence. 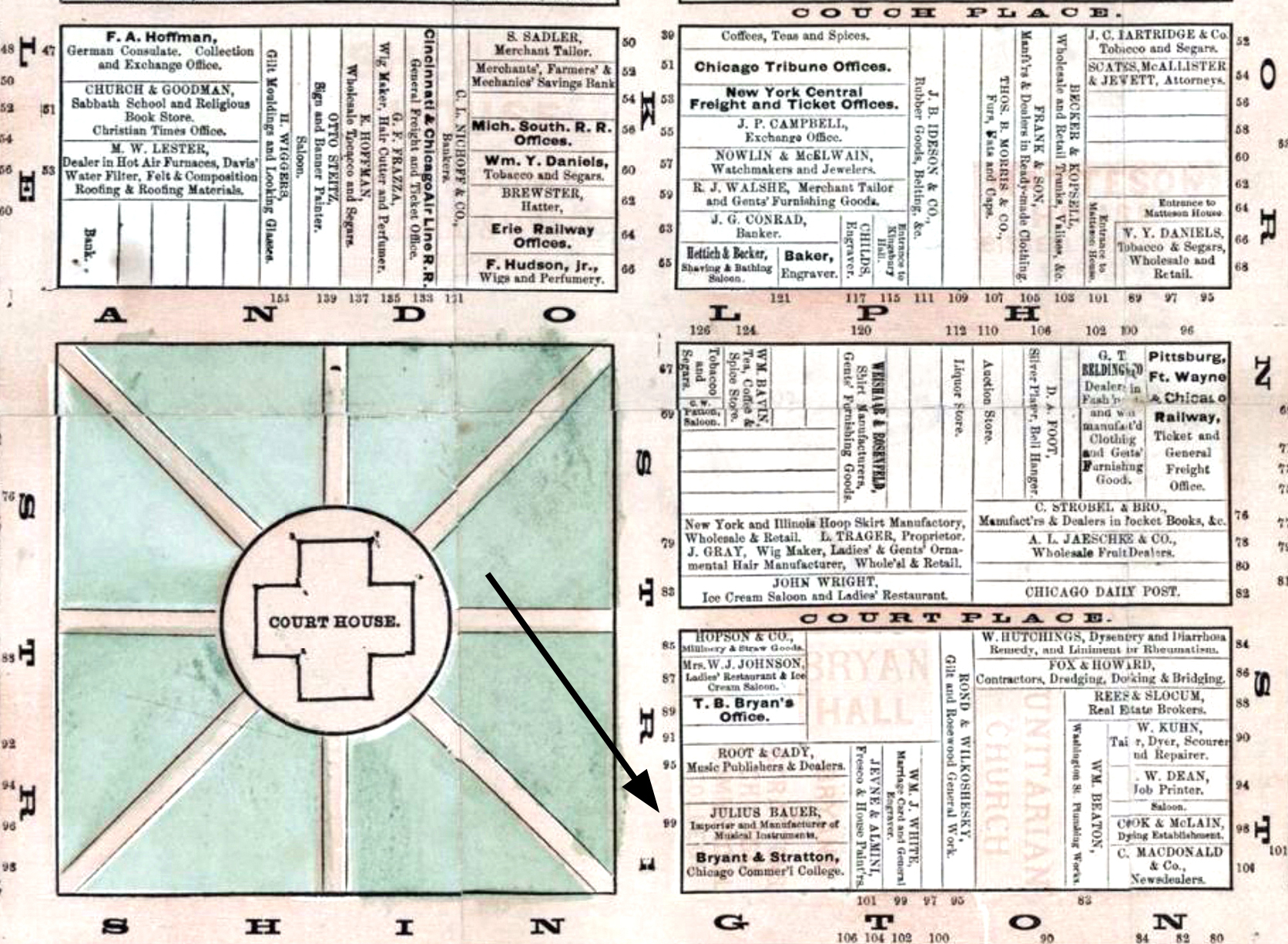 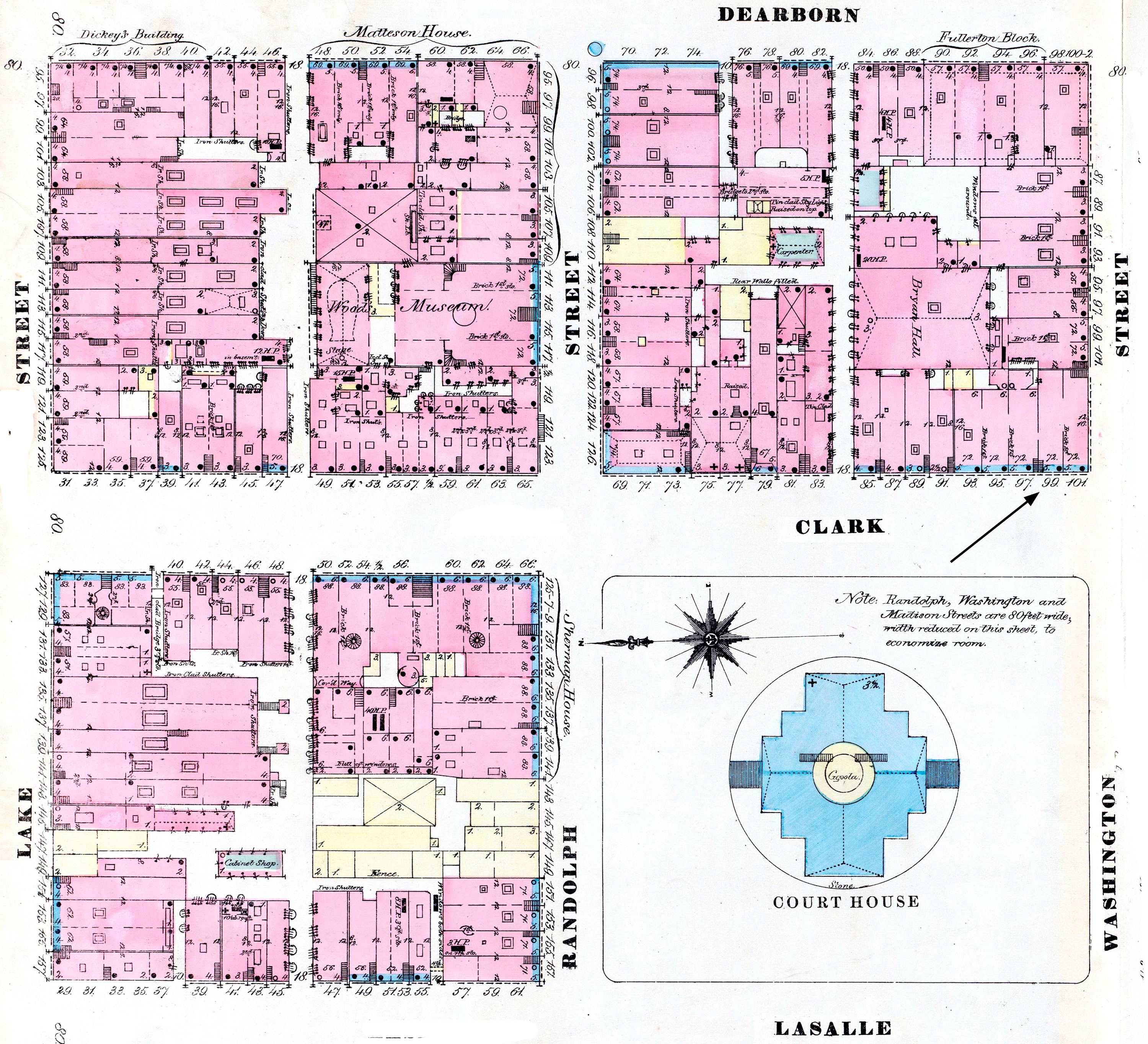 Bauer’s Music Emporium.
Julius Bauer & Co. now occupy their new and elegant music wareroom, corner of State and Monroe streets, under the new Palmer Hotel. This establishment will be the the headquarters of the Knabe piano in this city. It is one of the handsomest storerooms in Chicago, and is elegantly fitted up. The Knabe is universally recognized as the sweetest, and in its mechanical construction, the best piano manufactured. Julius Bauer & Co. are among the oldest of our musical dealers, and have on hand a full assortment of musical merchandise. Persons requiring a first-class piano, violin, band instrument, etc., cannot do better than on Julius Bauer & Co.

Julius Bauer.
The superb warerooms of Julius Bauer are on the southeast corner of State and Monroe streets, the handsomest location in the Palmer House. At this elegant establishment may be found the world-renowned Knabe pianos, which have been tested and approved by the greatest masters of Europe and America. Mr. Bauer is the sole Western Agent for these magnificent instruments. At his place may also be found a choice and comprehensive variety of musical merchandise of all kinds. The church and parlor organs sold by him are of the finest grade known to the musical world. The Bauer pianos, beautiful in finish and perfect in tone, are manufactured only by him. These instruments are favorites everywhere, in conservatory, concert-hall, and homes. They are referred to with admiration everywhere. 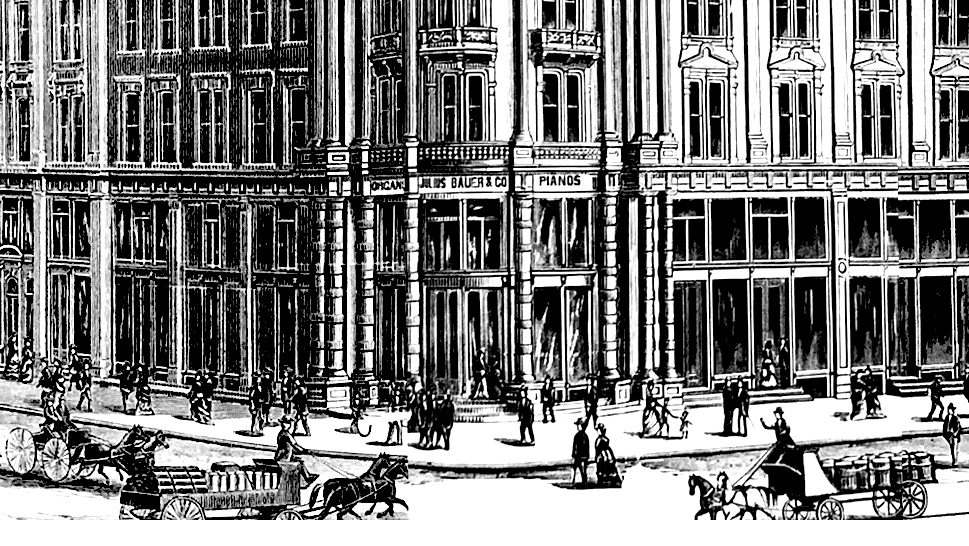 Julius Bauer & Co., will occupy three stores in Potter Palmer’s Grand Hotel, 60 by 145 feet, with a large stock of the celebrated Knabe and Bauer Pianos, Organs and all kinds of musical instruments. These stores will be fitted up in a style to render with the finest musical warerooms in the world. 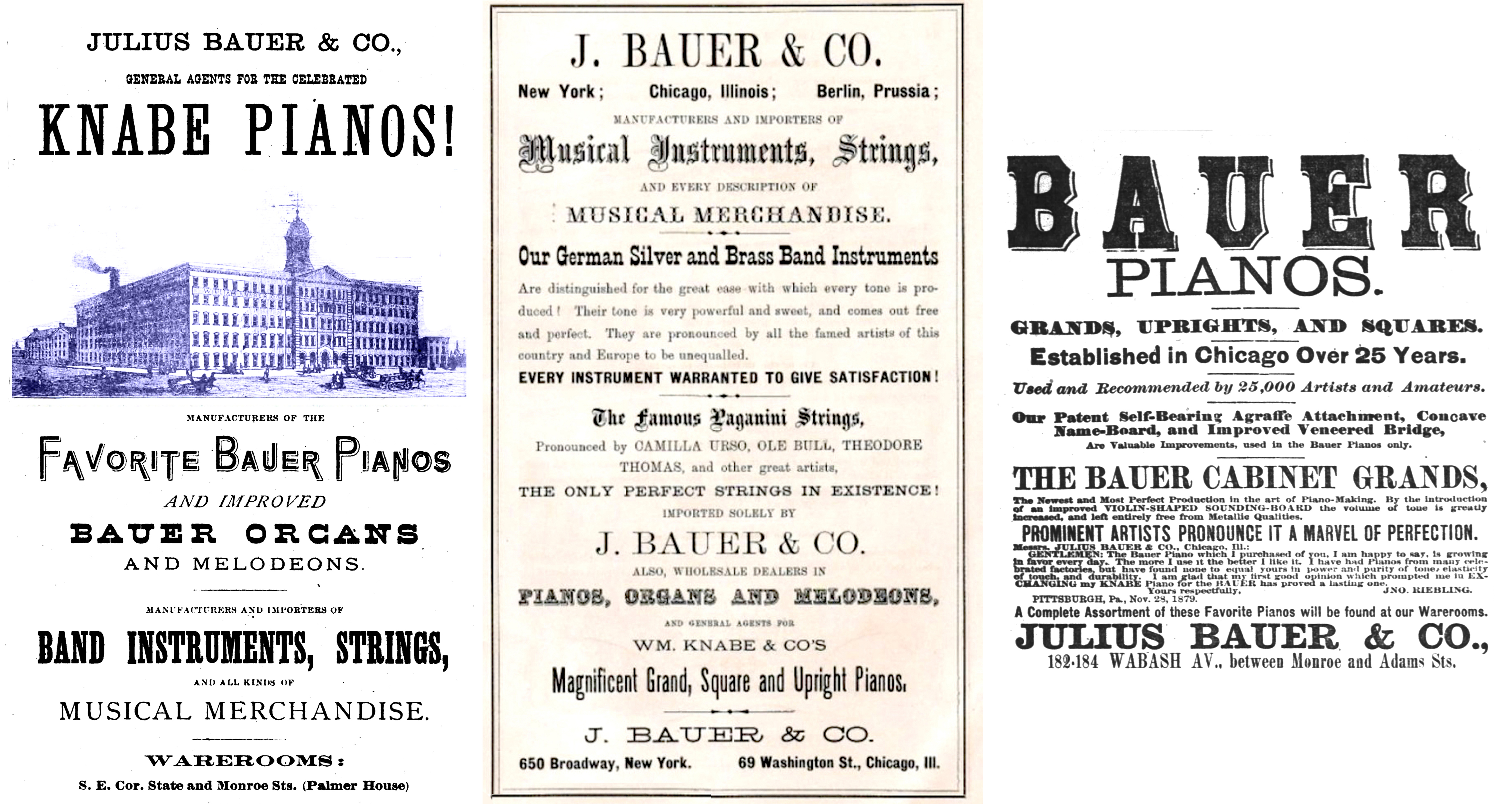 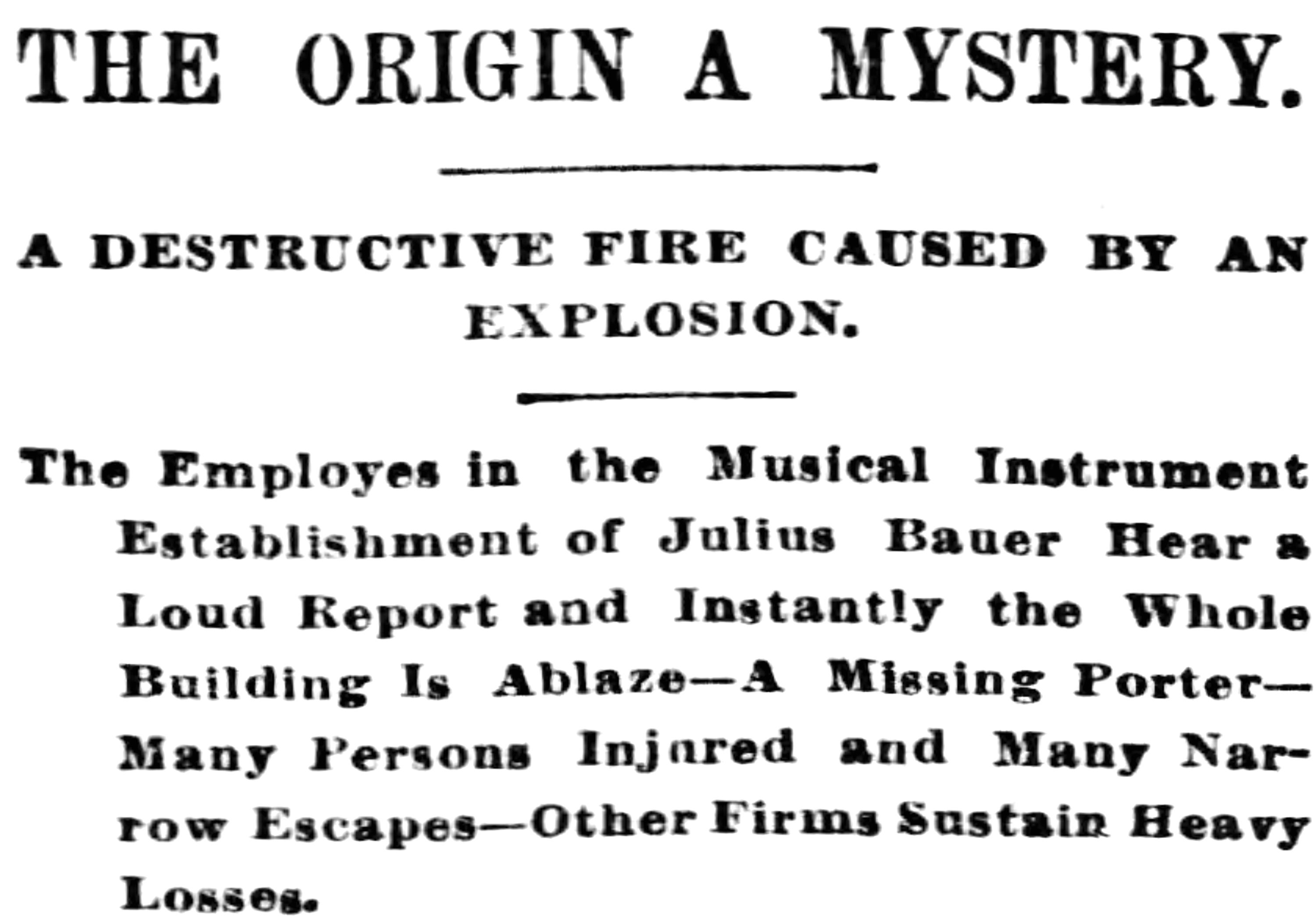 The fire was caused by an explosion, the origin of which is a mystery. There were no explosives in the building. John Konitzsky, who had been a porter at the store, was discharged the day before. It is said that the people about the place were afraid of him. He is reported to have drawn a revolver on the bookkeeper, and Mrs. Bauer, it is claimed, feared he would do something desperate. It is alleged that he was seen to go into the basement a few minutes before the explosion occurred. He has not been seen since, and it is said that he would have had great difficulty in getting out. The police would like to know what has become of him. The premises were searched, but no trace of him was discovered. It was stated in an afternoon paper that the police were looking for the porter through a suspicion that he had set fire to the building. Last night, however, they denied they were on the lookout for him, and said that their only interest in the man was to know whether or not he was burned to death. 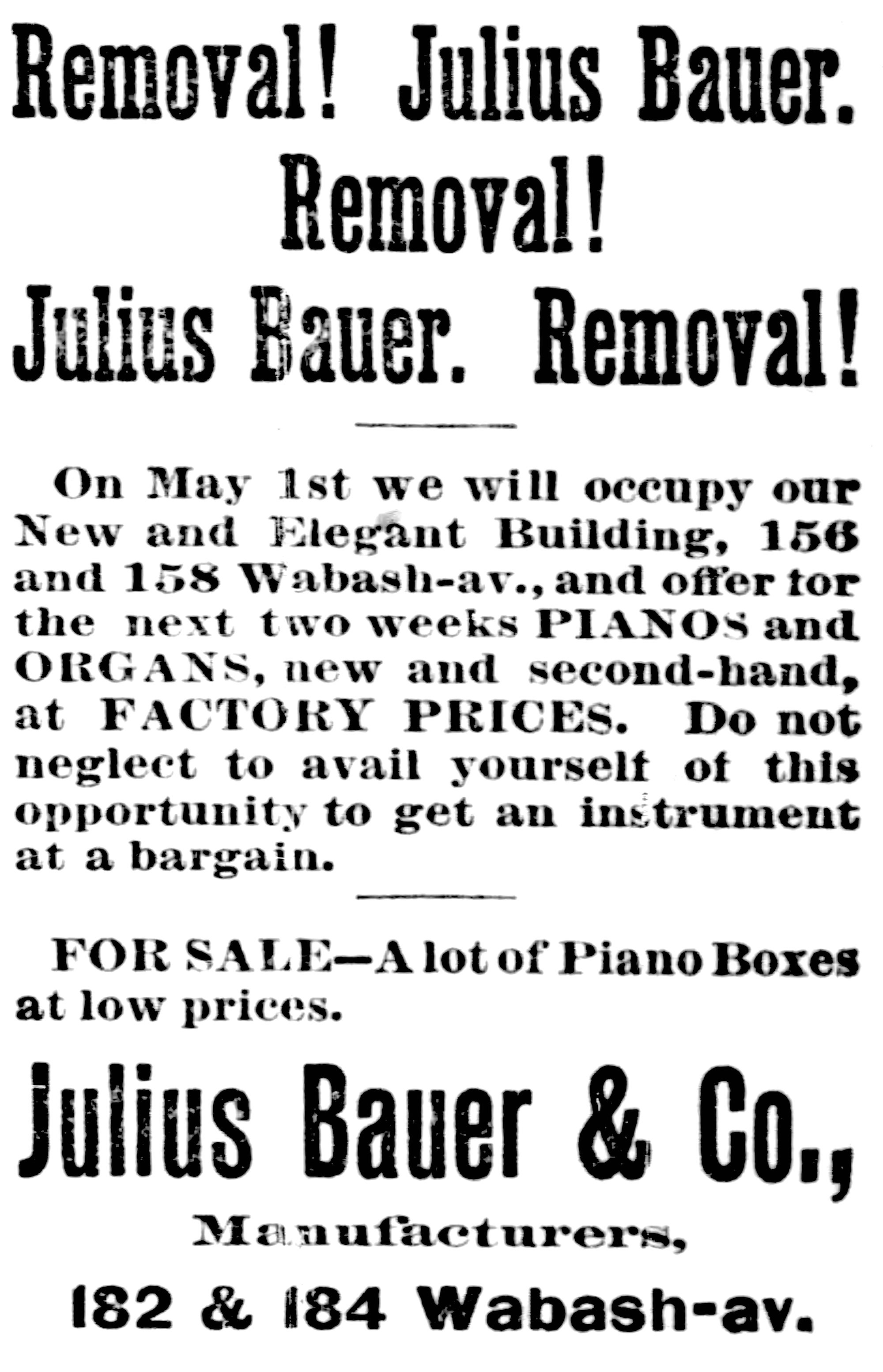 The spread of the fire was so rapid that none of the persons around the building had time to think of anything but escape, and Officer Kelly, who is on duty at the Exposition Building, passing in that direction on his way to dinner, heard the shouts of those in the store and turned in an alarm of fire. The first Fire Marshal to arrive saw the dangerous proportions of the blaze and promptly sent in a second alarm. Later a general alarm was sounded.

The burned building was a five story structure. Julius Bauer occupied the first and fourth floors; the Standard Musical & Manufacturing Company, together with Pfadner, Graff & Co., occupied the second; the third and fifth floors were used by the Chicago Carpet Company as storerooms. D. Appleton & Co. and A.A. Maxwell & Co. also had large quantities of books stored on the upper floors.

The stock in the Bauer establishment was valued at $125,000, and was a total loss. Of the 150 pianos in the place only three were saved, and these were damaged. The stock was well insured, the policies being distributed among various companies, but none of the employés could give any information more definite than this general statement. It is not known whether or not the vaults in the place were fireproof. If they were not bills receivable for a large amount were destroyed, and the loss would put the firm to great trouble.

Julius Bauer began business here thirty-five years ago. His was the first music house in the city. He was at one time in the Crosby Opera-House and went from there to the Palmer House. Afterwards he occupied a store at No. 184 Wabash avenue and moved to the present location seven years ago. Mr. Bauer dies December, 1885. It is thought that the concern will build a store at Eighteenth and Wabash avenue, where i owns property.

Inspector Shay, who has been examining the building, said last night that he was not prepared to say whether the fire was of incendiary origin or not. He said:

There is a suspicion of incendiarism about it, and I shall continue my examination tomorrow. No one is suspected of incendiarism in the matter so far as I know, and if the police are looking for any one it is not at my instruction nor with my knowledge. I am not yet cetain how the fire originated.1 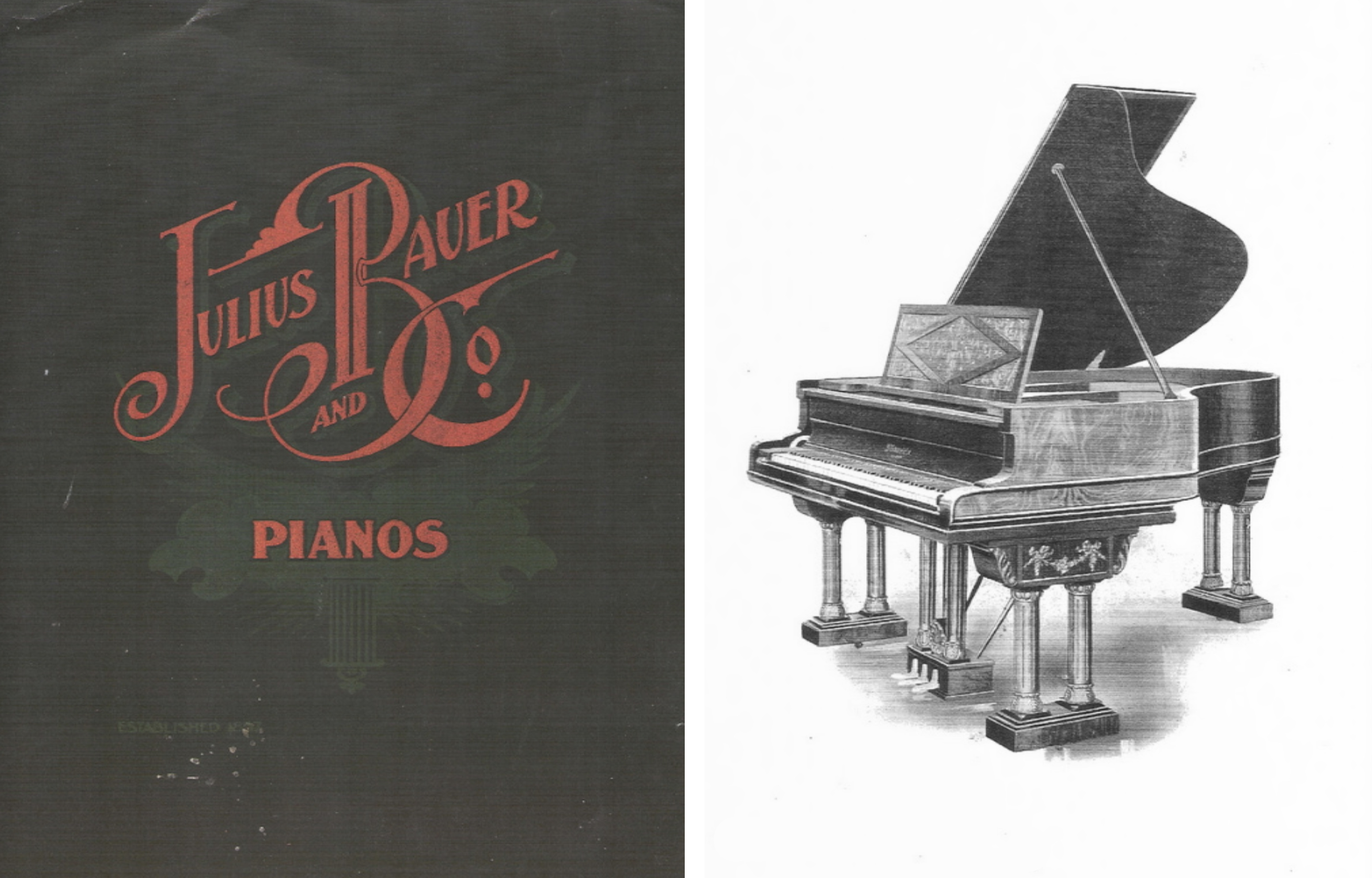 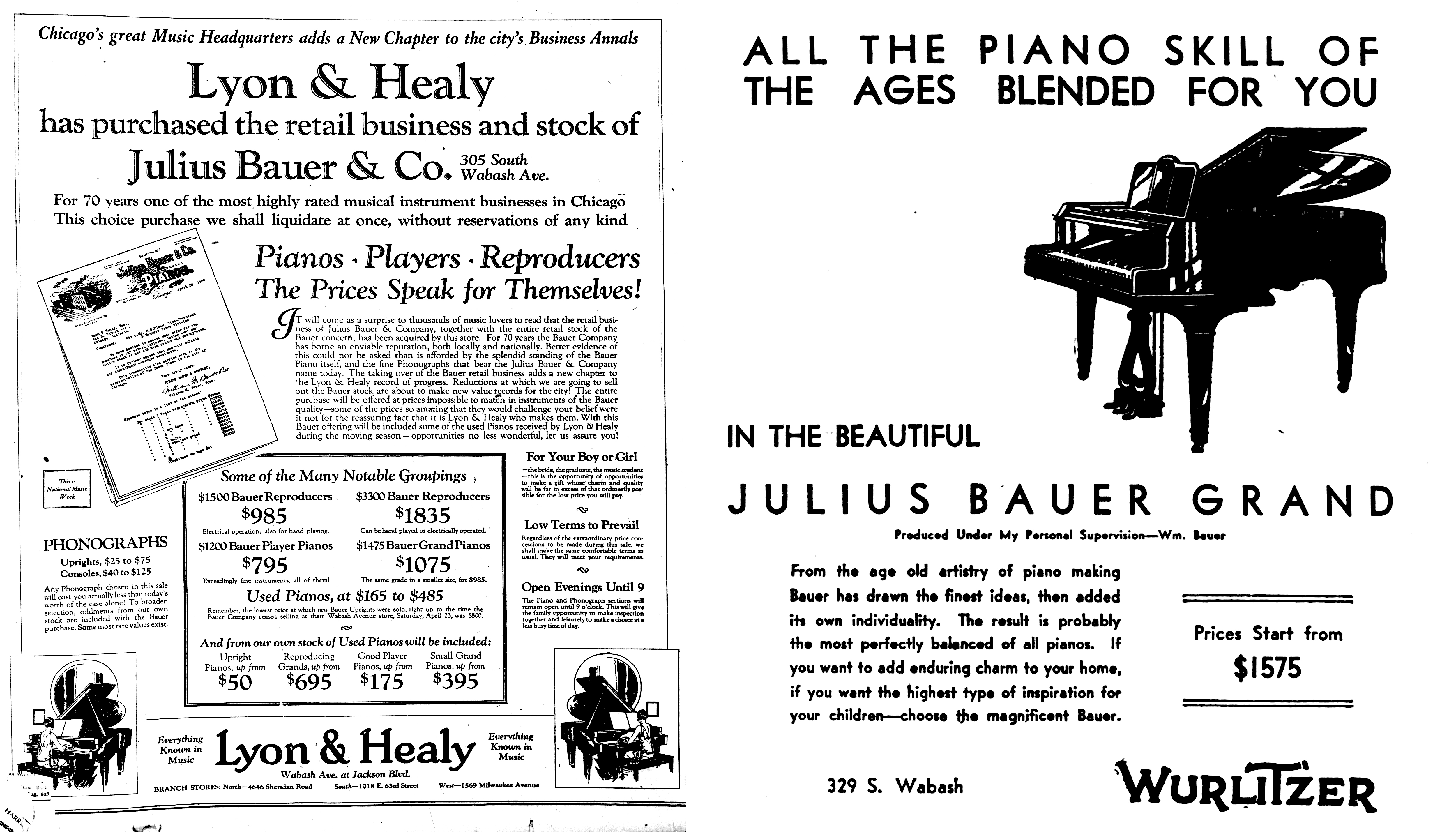 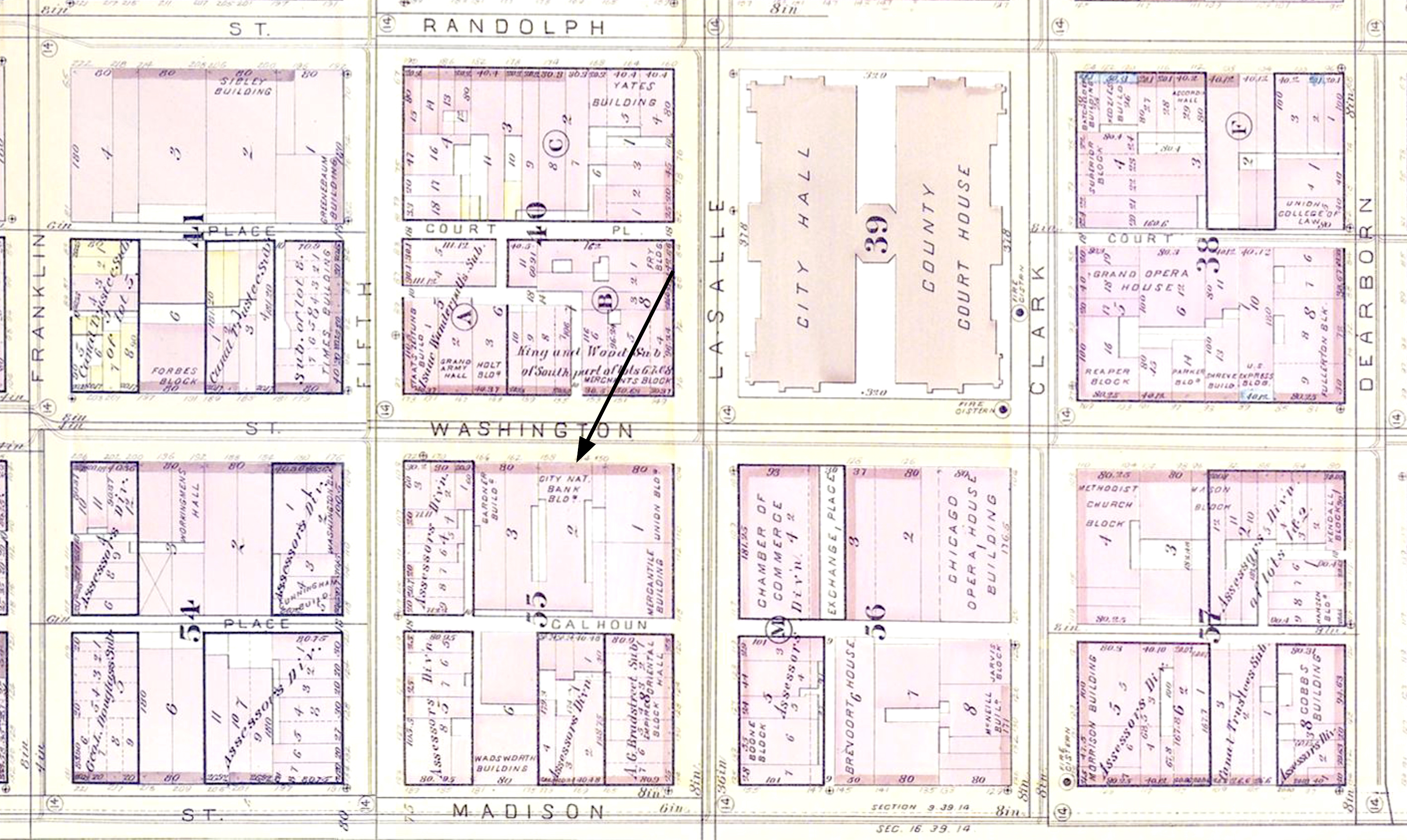 1 Chicago Tribune, July 20, 1888—The Porter Was Burned to Death.The body of John Konitzsky, 28 years old, unmarried and boarded with F.H. Cesson at No. 287 East Kinzie street, was found in the ruins and it was evident that the man had been knocked down by the explosion and roasted alive. He was in the employ of the Bauer company about eight months. The generally accepted theory is that the gas was by some means left turned on, though unlighted, and that the porter was in the act of striking a light when the gas with which the cellar was filled became ignited. There is no credence given to the rumors of incendiarism.