Volk & Feeney’s Marble Works.
Mr. Leonard W. Volk, by his ability as a sculptor, has given Chicago a name abroad as an artist. A natural consequence of this has been a very large trade in the marble business for the firm of Volk & Feeny, of which he is the senior partner. They have recently removed from their old quarters on the corner of State and Washington sts., to a splendid new marble building at Nos. 195 and 197 Washington street. They are now properly prepared to execute the extensive orders which come from all parts of the country. Mr. Volk pays personal attention to all designs, and the assurance that the artist who designed the Douglas monument and executed the bust of immortal Lincoln and statue of Douglas, is to superintend all work, has given the establishment a national reputation. They import directly from Scotland the celebrated Red Scotch Granite, and are always stocked with the best of materials from all parts of the world. Their orders are from the Atlantic seaboard to Nebraska, and the artistic taste in which everything is executed , its beauty and substantiality, promise a continuous growth for the establishment in the future.

The new building is the finest for the purpose in Chicago, and is in every respect in keeping with the status of the business. 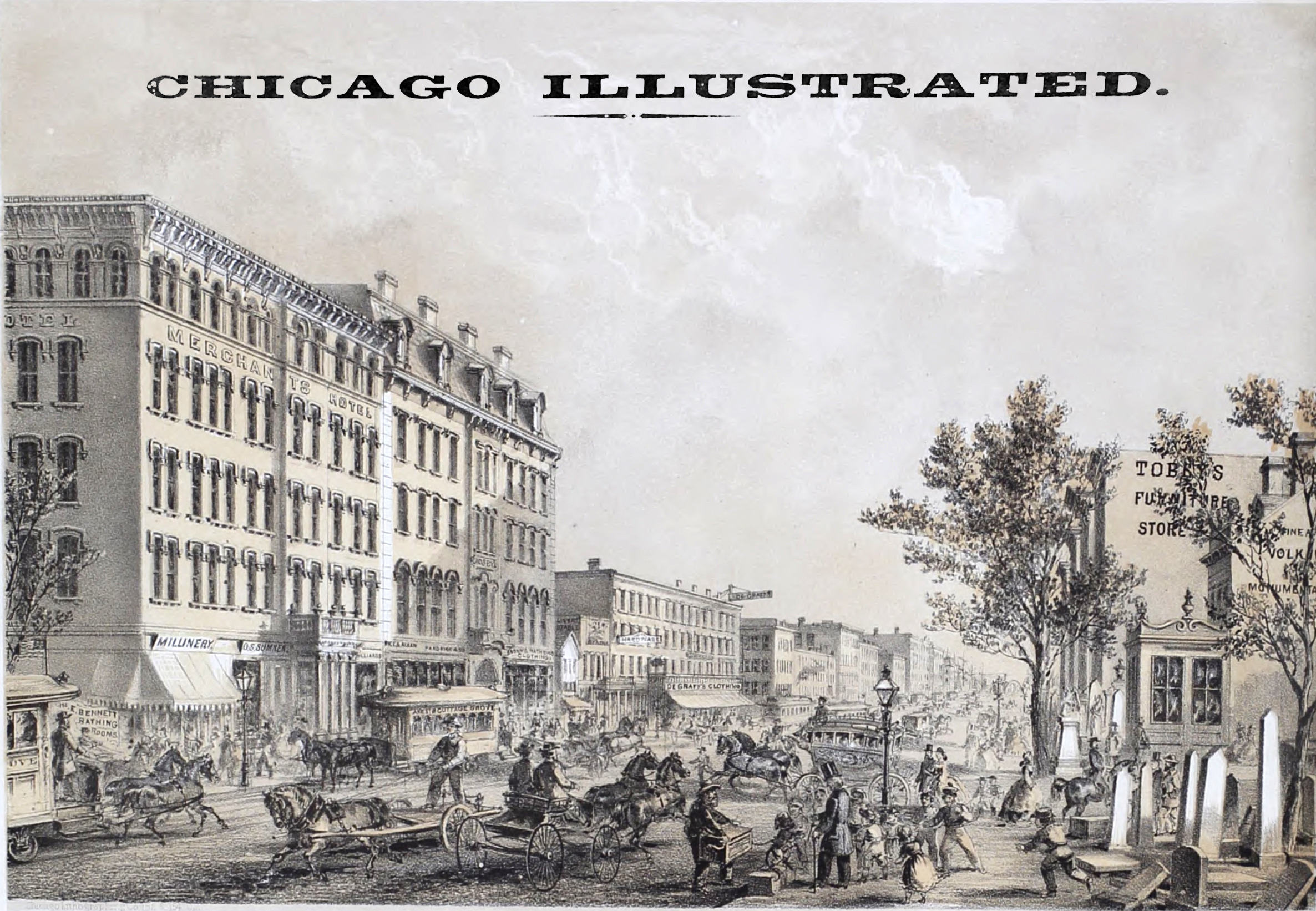 Corner of State and Washington Streets.
At the right of the illustration is the marble yard of Volk, Moore & Co. store.

Volk.
Chicago has one of the finest sculptors in America, who has made our city his permanent home, and given us a name abroad for art. To praise the various works of Mr. Leonard Volk is almost a superfluity. The people of the West know all about him, and knowing all about him, are enthusiastic in his praise. For some time past he has been the senior partner in a marble firm, and has paid personal attention to all designs. This fact has made the firm of Volk & Feeny exceedingly popular in their line of business. To accommodate their trade they have been obliged to leave the old shop at the corner of State and Washington street, and occupy the splendid new building erected for the purpose, at Nos. 195 and 197 Washington street. Mr. Volk’s connection with the firm has given it a national reputation, and their orders are from the Atlantic seaboard to the extremes of Nebraska. To be fully prepared for such a business, they have arrangements in full operation for importing marble and stone from all parts of the world, and spare no expense to keep every needed thing constantly on hand. It is scarcely necessary to commend any one who wants a handsome mantel, or an appropriate mark for the resting place of the departed, to go or send to them. They have the finest place of the kind in the city, and their work needs no praise.

Mr. Leonard W. Volk, the eminent sculptor, will leave Chicago early this week, for Rome, where he intends to take up his abode for the next two years, in order to complete a number of important works. Mr. Volk, besides having attained a wide and high reputation as a sculptor, has been associated, during his long residence here, with so many public enterprises, and has labored so earnestly to promote the interests of art in Chicago, that citizens will be sorry to part with him, even for a time. Among the commissions with which he has been entrusted, are the following:

For Mrs. Henry Keep, of New York, two statues and several busts, including one of the late Henry Keep; for Mrs. H. O. Stone, of htis city, an ideal statue, and a portrait bust; for Mr. S. B. Cobb, of this city, a bust of his late son, Walter Cobb; for Mr. S. S. Sample, of Keokuk, Iowa, a bust of his father, with other orders, in all, amounting to about $25,000.

Many of the models of these have already been finished in this city, and have been forwarded to Mr. Volk’s studio in Rome, where he will execute them in the finest statuary marble.