Is located at Cottage Grove, about four miles from the Court House. It is built of Athens marble, in the Norman or Romanesque style of architecture. The extreme length of the building is three hundred and thirty-six feet, with a depth of one hundred and seventy-two feet, with wings on the north and south. The height of the main tower is one hundred and fifty-six feet. The north wing is not yet completed. Its external appearance is very much like that of the Smithsonian Institute at Washington, with its lofty towers and minarets.

The University was first opened for instruction in 1858, and then occupied what is now the south wing. The Hon. Stephen A. Douglas was the founder of the institution, and donated the land, ten acres, upon which the structure stands. The University is always accessible to visitors, and may be reached by the Cottage Grove line of cars from State Street. Another interesting object connected with the University is the Dearborn Observatory.

Situated west of the main building of the University. It consists of a hollow cone, twenty-seven feet in diameter at the base, and eighty-two feet high, to the floor of the astronomer’s room; erected at ‘a cost of twenty-five thousand dollars; and contains the great Alvan Clark telescope, the largest refractor in the world, having an object glass of eighteen and a half inches aperture, and a focal length of twenty-three feet, and weighing six tons.

Visitors are privileged to examine this immense instrument by application to the person in charge.

The school had financial difficulties throughout its short existence, and it closed in the fall of 1886. The building was razed in 1890. 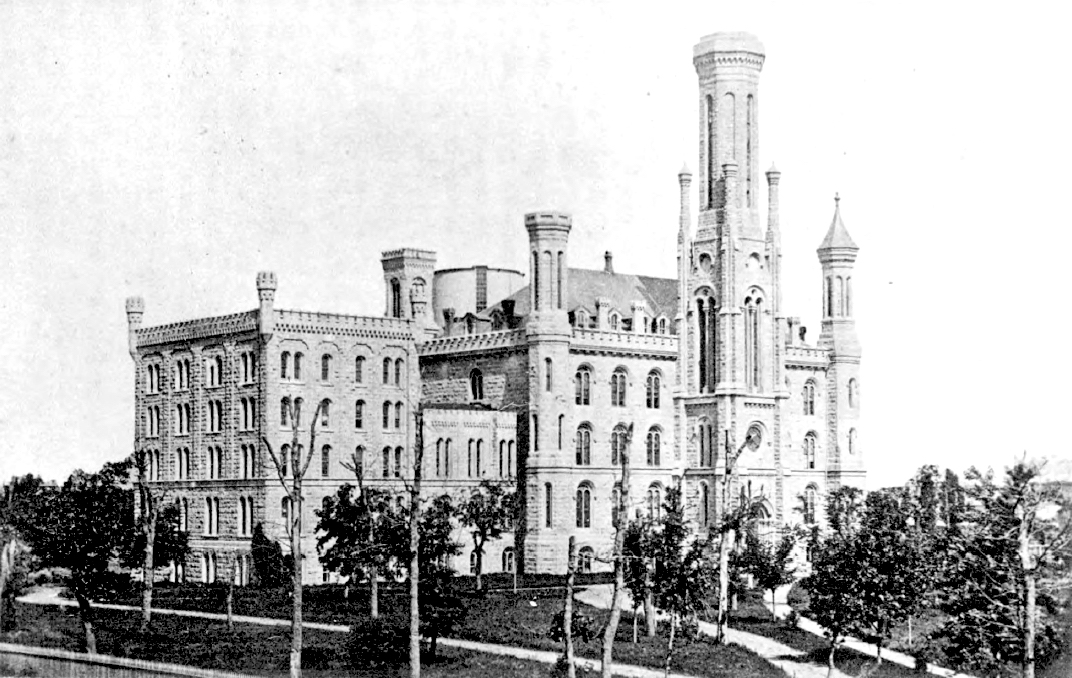 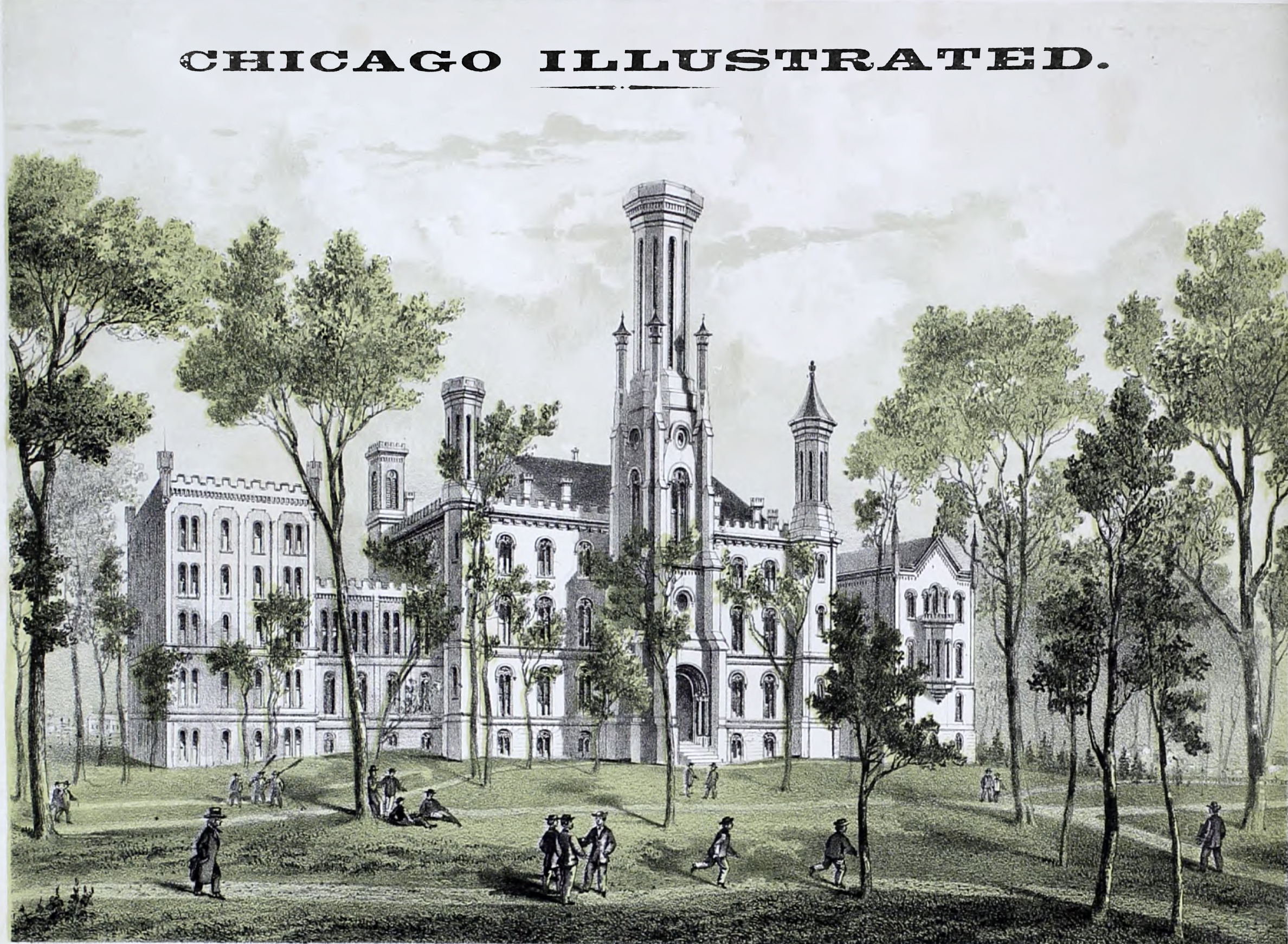 CHICAGO UNIVERSITY is represented by this view of the building, will be when completed. The artist anticipated the finishing work now rapidly progressing upon the building.

The University is charmingly located. It is now within the corporate limits of the City of Chicago, but nearly three miles south of the centre of the City. It is within four hundred yards of Lake Michigan. It is built upon a tract of land donated for this purpose late Senator Stephen A. Douglas. The history of the grant of land is as follows:

There came to Chicago in 1854 a very excellent and accomplished clergyman, a Presbyterian, who years previously had befriended Mr. Douglas. The latter proposed to this clergyman the establishment of a University of Chicago, and offering the necessary land. The reverend gentleman asked for six months in which to see what his denominational friends would do in the matter; and at the end of the six months the time was extended. From whatever cause the proposition did not meet with much promise. While it was pending, the Rev. J, C. Burroughs, then of Shurtleff College, near Alton, heard of the liberal offer. He waited upon Judge Douglas, and proposed to build the University if the Judge would give the land. He was met with equal promptness, and was assured that if at the end of the second extended term the Presbyterians did not feel disposed to accept the offer, he would give it to Dr. Burroughs. When the time was expired, and nothing had been done, Judge Douglas, in April. 1856, executed the papers transferring the beautiful tract of land, now worth eighty thousand dollars, to the Trustees of the Chicago University.

The edifices consists of a main building, the corridors, and two wings. The main building is 150 feet long, 110 feet wide, and 90 feet high. The turrets at the corners of the main building are each 120 feet high, and the grand tower in front is 150 feet high. The principal entrance to the building is through the grand wrought stone arched doorway in this tower. The corridors are 55 feet high, 45 feet long, and 44 wide. The wings are 46×67 feet, and are four stories high, exclusive of the basement. Total length of the building, 336 feet. The material used in the construction is the justly celebrated Athens stone of our own State. The walls are rockfaced, the turrets, facings, cornices, etc., are dressed. The style is Norman. The entire cost will be $200,000. The exterior appearance of the University is very grand and imposing.

W. W. Boyington, of Chicago, is entitled to the honor of the design, and to the no less honorable distinction of having personally superintended this extensive and magnificent specimen of architectural beauty.

In April, 1857, the University was incorporated by the Legislature of Illinois. On the 24th of May, the Board of Trustees held its first meeting and organized. The Hon. Stephen A. Douglas was chosen President, and William Jones, Esq., President of the Executive Committee. A Board of Regents, with supervisory and visitation powers, was also organized, and steps were taken for an immediate commencement of the building. The plans prepared by William W. Boyington, Esq., Architect, were adopted, and the building presented in the accompanying view was the result.

On the 4th of July, 1857, the corner stone was laid with appropriate ceremonies. Mr. Douglas was present on the occasion. In a few months thereafter, the whole country was subjected to great financial embarrassment, and the work was suspended. Many of the original subscribers were unable for a long time to furnish their subscriptions, In 1858, William Jones, Esq., of Chicago, personally undertook the task of renewing the work, and by his own liberality and indefatigable efforts, the building was commenced, and one wing of the edifice was completed. In September, 1858, it was resolved to open the University for the instruction of pupils. The President and two Professors were chosen, and on the 29th of September, 1858, several small classes were organized in temporary rooms. Since that time the University has progressed in all respects towards its present high standard of excellence and prosperity. On the 22nd of July, 1859, the building was dedicated. In September, 1858, the Law Department was, through the liberality of the Hon. Thomas Hoyne, successfully organized, and immediately went into successful operation.

The University owes its origin at the time it started to the liberal donation of Mr. Douglas, but even the grant would not have been sufficient had it not been for the perseverance, the courage, and the unflagging zeal of Dr. Burroughs. He was from the first, as he continued to be for many years, the life of the enterprise. His was a zeal that knew no rest; his was a courage that never admitted defeat, but gained fresh vigor from every adverse circumstances; and his was a perseverance that when others stood still led him on to ultimate success. Hardly had the corner stone been laid when the country was swept with financial disaster; the men who had promised of their names to build the University lost all they had. Time and again did failure stare the Trustees so boldly in the face, that the most sanguine grew despairing. Dr. Burroughs, however, never yielded. Failure only incited him to new efforts, and success, with all its grateful triumphs, has been the result of his labors. He secured the original grant of land, he gave the first dollar contributed to the building fund; he taught the first class of pupils collected beneath its roof; and to him, more than to any other person, is the country indebted for the successful establishment of this University, and for the erection of this magnificent and enduring edifice.

The Catalogue for the 1865-6 exhibits a total number of all grades of students of 273.

The present Faculty of the University is constituted as follows: 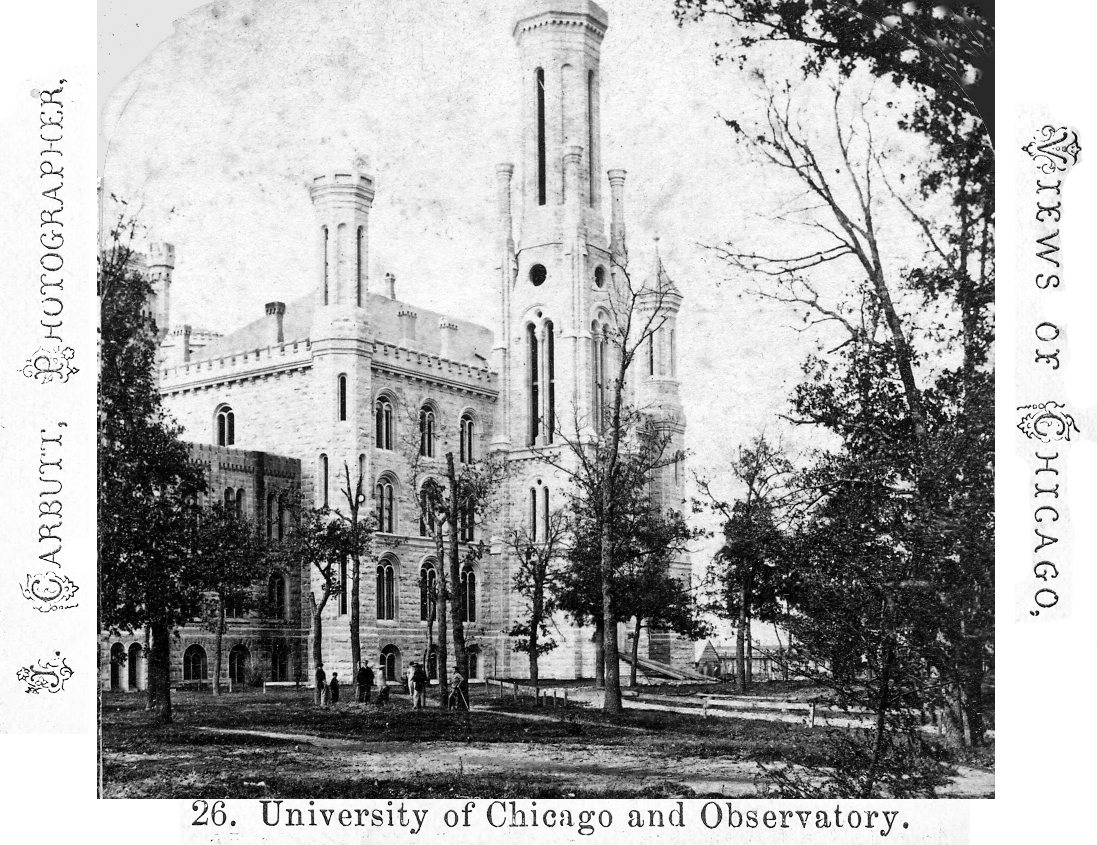 GAVE UP THE STRUGGLE.
The Chicago University Trustees Yield to the Inevitable.
The Board of Trustees of the Chicago University met at the Grand Pacific yesterday afternoon. It was decided that the university must finally succumb, it being impossible to pay the Union Mutual Life-Insurance Company of Maine the indebtedness of $300,000. The following resolutions were unanimously adopted:

WHEREAS, This corporation is unable to raise the amount of money due under the proposed settlement with the Union Mutual Life-Insurance Company of MAine; and
WHEREAS, The income of the Chicago University is insufficient to meet current expenses; and
WHEREAS, In the judgement of this board it is impossible to further continue its educational works; therefore,
Resolved. That the educational work of the Chicago University be, and is hereby suspended.
Resolved. That the disposition of the real and personal property of the university and all matters pertaining to the corporation, including the execution and delivery of all conveyances, releases, and papers be referred to the Executive Committee will full power to act.

Dr. P. S. Henson offer a resolution, which was passed, expressing a willingness on the part of the members of the board that a new organization be formed for educational purposes. The members are now considering several plans whereby educational work shall go on. Yesterday two plans were suggested. One by the citizens of Chicago to purchase the present or other property. The latter suggestion seems to the members the more feasible, as most of them are convinced that from this present wreck will rise an undenominational and a more cosmopolitan institution.

Work Commenced Yesterday on Tearing Down the Old University Buildings.
Yesterday work was begun on what seems to many the almost vandal task of demolishing the old University of Chicago buildings on Cottage Grove avenue, near Thirty-fifth street. Considerable progress was made last week in clearing out the interior, but yesterday work was begun on the great stone walls, which have so long been a stately landmark in that part of the city. If the old place had to be destroyed it is perhaps fitting that the buildings first erected should go first, and work was begun on the old Jones Hall, where so many generations of students had made their homes. Yesterday the four turrets which marked its corners, with the heavy stone coping which encircled the flat roof on which mischievous freshmen were wont to occasionally install stray cattle, were tumbled to the ground.

The corner-stone of this building was laid July 4, 1857, with great ceremony, Senator Douglass, the founder of the institution, delivering the address. It served the needs of the young college for several years, the main building being erected during the war. It had been hoped by many of the more than five thousand students who attended the old university that the new institution for which Chicago is indebted to Mr. Rockefeller would be located on the old site, and so would perpetuate for them the old memories and traditions. But the gift the other day by Marshall Field of a finely situated site in Hyde Park practically settled the matter of the location of the new college, and that the old buildings would not be used was made painfully certain yesterday.