Nixon’s Exchange.—This building occupies the space on Washington street, east of the Chamber of Commerce and west of the edifice last described Smith & Nixon’s Hall. It covers an area of of ninety-three feet by one hundred and eighty-two on Exchange place. The Washington street front has the same height, as the Smith & Nixon’s building, and is flanked by a tower thirty feet square and rising to the height of the exchange olace facade. The building is constructed of stone, brick and iron. The fronts are faced with Chicago pressed brick, ornamented with iron quoins, key-stones, pillasters, etc. The cornice is of wood and elaborately carved. The basement and principal story have iron fronts, with plate glass windows throughout. These two stories are nine and fourteen and a half feet high, and divided into eighteen offices, a portion of them provided with iron vaults. The principal story is reached by ornamental iron steps from a stone sidewalk, surrounding the entire building. The second, third and fourth stories are reached from Exchange place by stone steps, twelve feet long, supported by heavy stone buttress blocks, with paneled faces. There is also an entrance to these stories through the large portico on Washington street. The three stories are divided into twenty offices and two large rooms, thirty by eighty-five each, to be used for Commercial College purposes.

The Washington street entrance is ten feet wide through the large portico. In this block is situated “Morse’s Exchange,” a large hall sixty feet square by twenty-five feet in height, with private rooms attached. The building cost somewhat over $100,000. O. H. Matz was the architect. 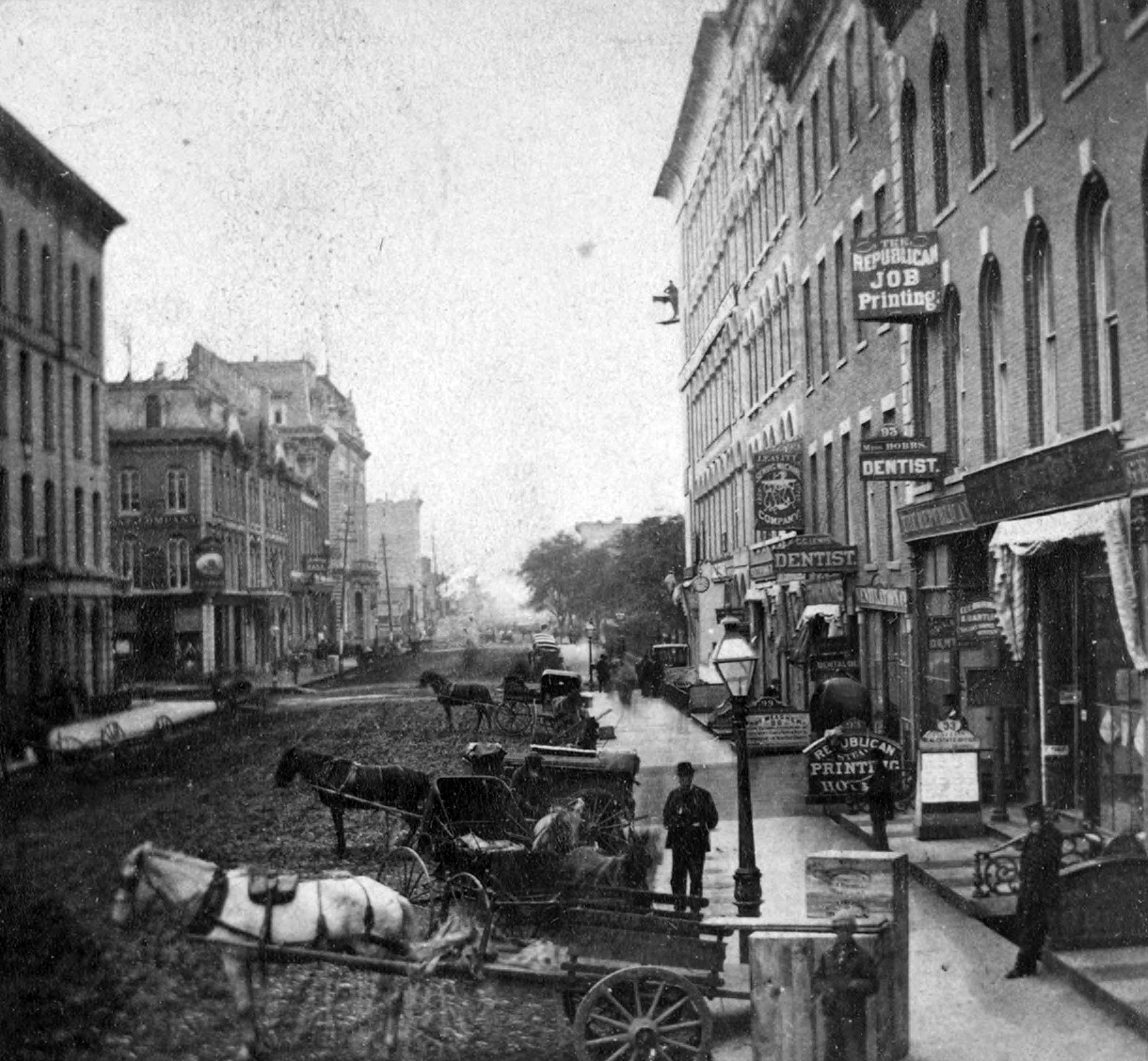 West on Washington St from Dearborn Street in 1867

The action begun during the last week by the heirs of William S. Johnson to correct what is termed a clerical error in the will of the deceased, so that the property left by him may become more valuable than at present, brings to the fore the Exchange Building, at the corner of Washington and Clark streets, one of the most notable pieces of property in Chicago, and suggests a bit of history. The lot upon which the present structure stands is 182 feet front on Clark street and 107 feet on Washington street. Many years ago it was purchased by P. F. W. Peck for sum not now known, but insignificant when compare with the present appraised value. Upon it about twenty feet from each street was erected a church, which was used by a Presbyterian congregation until about 1862, when the spire was taken from it and it was leased to Mr. E. Brunswick, who converted it into the largest billiard-hall that Chicago had yet boasted of. In 1864 Mr. Peck became anxious to lease the property including the church, for a term of years, and he advertised for bids. The highest bidder was Mr. W. K. Nixon, the well-known real estate dealer, and he was given a lease of the ground and church for a term of twenty years, at an annual rental of $13,248 for the first ten years, and revaluation at the end of that time and five years thereafter. Mr. Nixon immediately erected a block three stories and basement in height, constructed of brick with stone trimmings, and the church was turned into a public hall, and was known as Smith & Nixon’s Hall. In 1869 Mr. Nixon transferred the lease and sold the building to Mr. W. S. Johnson for $175,000. In 1871 the fire swepts the buildings away, leaving nothing but the bare lot. The ashes of the structure were scarcely cool when workmen were busy removing the debris, and the work of constructing the building, which is now scarcely an ornament, although it was useful at the time, was begun. No time was lost in completing the structure, and it was one of the first and largest buildings ready for occupancy after the fire. The stores and offices in it were rented promptly at a good figure, and the aggregate of the first year’s rent was between $60,000 and $65,000. Since that time the building has been well tenanted, and even now it brings in a gross income of nearly $50,000. The rent paid for the ground during the first fifteen years was on the basis of a valuation of $1,200 per front foot on Clark street, but the second revaluation placed the land at $1,500 per front foot, and the rent has therefore been advanced in proportion. The lease of the ground will expire May 1 next, and if at that time the building is not removed it will go to the Peck estate with the surrender of the lease. It is said that the building will be razed by next spring, and will be replaced by a fine office and business building. The present structure is growing somewhat rickety with age, it never having been very substantial, and it is hoped that wiyhin a few years it will be removed.

One of the most important and noteworthy movings was that which took place yesterday from the old Exchange Building, at the corner of Clark and Washington streets. The premises are occupied almost entirely as offices, and nearly forty tenants have moved out within the past few days, and the remainder, numbering twenty, will have gone by tomorrow evening.

Three months ago it was decided that the property should pass out of the hands of the Johnson estate, the lease having expired. The agents if the estate made a pretext out of the valuation of the building at $1,500, to pretend that it could hold over for another term of twenty years, but the effort was unavailing, and at noon yesterday the agent of the Park estate tendered $1,500 to the agent of the Johnson estate in payment of their claim. The amount was at once accepted. Joseph Dixon, ex-Warden of the County Hospital, was then placed in charge of the building, reinforced by three or four assistants. Mr. Kerfoot, president of the Opera House Company, assumed charge of the building during the afternoon. The work of dismantling the building was begun yesterday, and the work of removing the entire structure will be commenced in a few days.