ACCIDENT AT THE SKATING RINK.—A serious accident, and one which might have proved fatal, occurred yesterday morning at te new Skating Rink, corner of Wabash avenue and Jackson street. The roof is being erected in sections, and it becoming necessary to remove some of the stays, a sudden gust of wind precipitated three of the sections to the ground, seriously injuring three of the workmen, Charles Borner, Jas. Russell and John Cavers. Borner was badly injured in the side, the blood flowing quite freely, but fortunately no ribs were broken, Cavers had an ankle sprained, and was otherwise considerably hurt. Russell’s injuries are byt slight. A number of others had a miraculous escape. The damages to the building is between $200 and $300.

SKATING IN CHICAGO.
Other cities besides New York have their skating ponds, though they do not rival in size our Central Park lakes. We give on page 93 (below) a representation of the interior of the “Great Skating Rink” at Chicago. This is the largest institution of the kind in this country, covering 18,100 square feet of surface. Here are daily and nightly congregated the elite of the City of the Lakes, and the scene represented by our artist when the waltzers are in motion and the fancy skaters are showing their skill, all under a flood of light from reflectors above, is brilliant in the extreme. 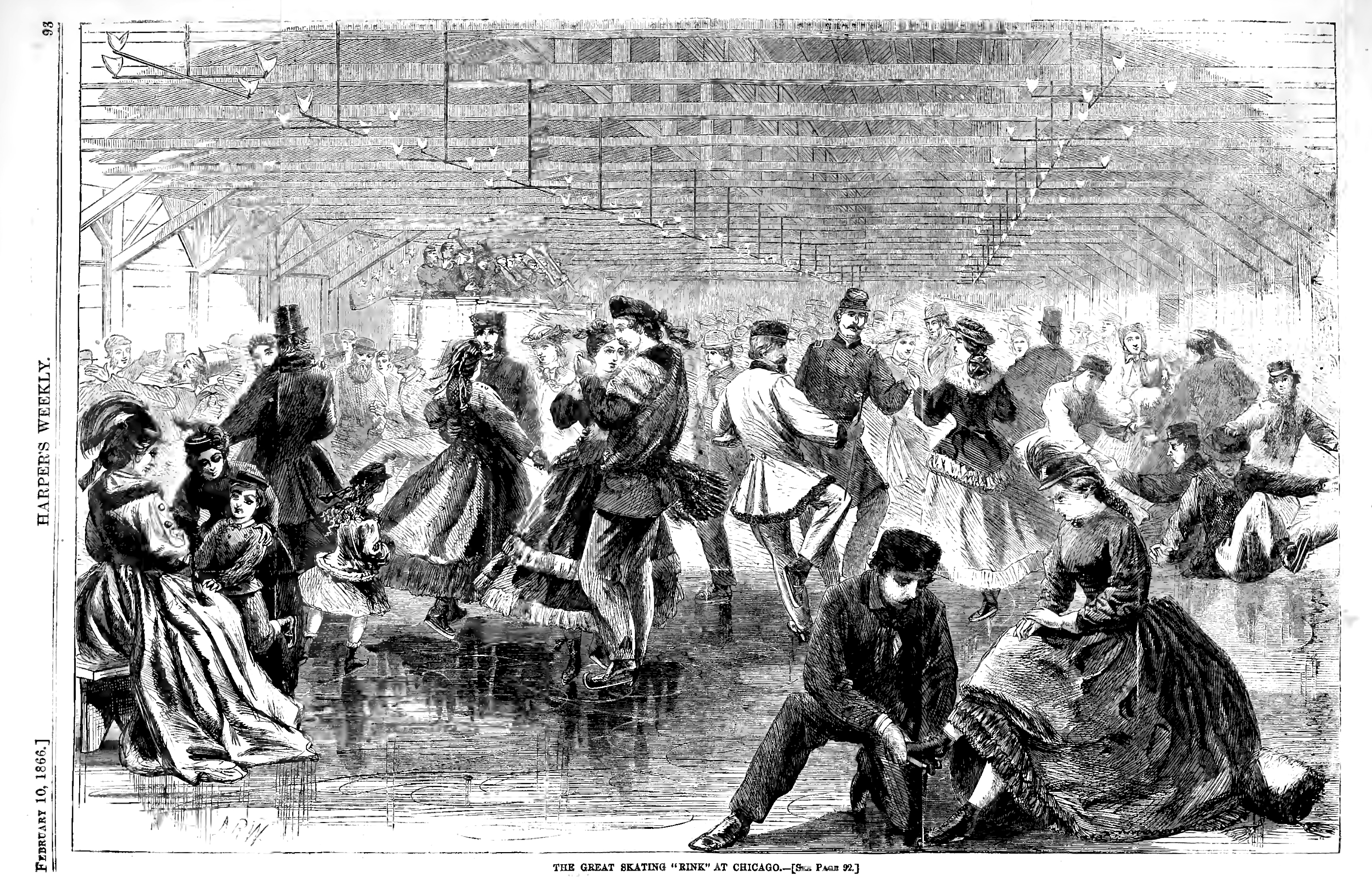 “The Great Ice Skating Rink in Chicago”
This facility opened in October 1865, and contained 14,025 square feet of skating surface.

The cold snap which set in so suddenly on Thursday night, has caused those who have in charge the providing people with winter amusement to push forward their arrangements with all haste. The mildness of the fall weather had led them to think that the severity of the winter would not set in for many days. Their preparations were, therefore, prosecuted with no great haste. But the mercury fell so rapidly in one night that by the next morning everting was frozen as tightly as a drum. On Saturday the wheels of vehicles rumbled through the streets, giving to powder the frozen bits of bits of mud, and singing forth the ringing sound that is so peculiar to a frosty atmosphere. People trod carefully the pavements, suddenly become slippery and at night, with overcoats wrapped tight about them, holding their gloved hands to their faces. hurried rapidly homeward. Amid the moving throng now and then one saw a figure not so well protected against the bitter cold night air. In the features, pinched and pale, one could read a tale of suffering, and the prospect of colder days at hand gave to them an expression yet more sad and pitiful. These hurried along like the rest, dragging their thinly protected limbs faster over the walks that they might the less feel the cold.

Winter’s long delayed advent is at hand. turning away from the diversions and pastimes of warmer days and nights, the old and young alike look forward to the amusements of the season.

As have been stated, the mildness of the weather caused the managers of the different places of amusements—the skating parks and rinks—to delay their preparations for the season. Now that the season is at hand, the work is going forward with rapidity, and all the parks are presenting a busy aspect. 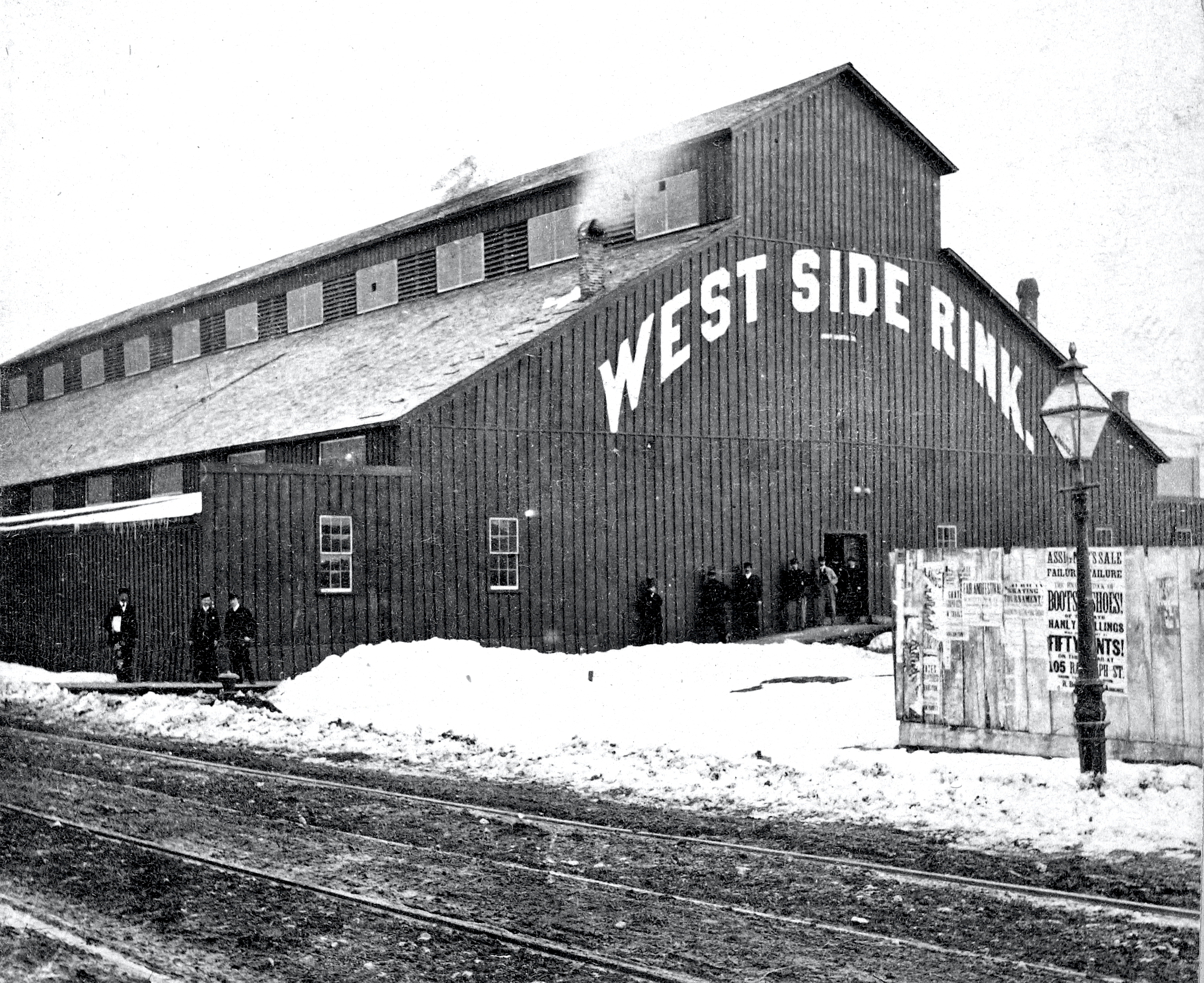 The West Side Rink.
John Carbutt, No. 72

The West Side Rink.
The West Side Rink Association are refitting their establishment, at the corner of Ada and West Randolph streets, at considerable expense. The skaying area of this rink already comprises 14,000 square feet. The basin is being enlarged and improved as rapidly as possible. It was found on removing the summer flooring that the bed had suffered greatly from rats, the animals having penetrated the bank in every direction. The work of building a dyke has alone occupied a large force of laborers during the past fortnight. The water will be let on during the present week, if the cold continues, by the first of next week the rink will be open to the public. The interior has been entirely refitted under the direction of Mr. T.C. Wilson, the superintendent. It is being decorated in handsome style. The skate department will be larger than any other in the city. The contractors have agreed to keep on hand constantly $1,000 worth of the choicest skates, which will be preserved in the finest order. The restaurant will be attended to by Harry Pease, and will be a feature in itself. The building has been strengthened by iron rods and bands, and rendered very firm and secure. A new weather house has been built at the entrance, and the sidewalk has been improved and widened.

The Directors have decided that season tickets shall admit at all times during the season, and the price for tickets have been reduced.

The Other Parks.
The Wabash Avenue Rink and the Central and Ogden Parks are not in as advanced a state as the West Side Rink. But in all of them the work of preparation is going busily forward. Many additions and improvements have been introduced, and every thing will be done to enhance the comfort and convenience of the skating public.

It is doubtful whether any of the parks will be open before the first of next week though the managers of the open parks are using their utmost endeavors to obtain ice just as soon as the bed of the parks shall be in a condition to receive water.

Skating Club.
The next meeting of the Chicago Skating Club will be held at the Tremont House, on Tuesday night. The question of adopting a skating costume, and other business of importance, requiring a full attendance, will be transacted.

The Wabash Avenue Skating Rink is no more. About half past 10 o’clock, yesterday forenoon, the entire structure ascended heavenward, in the shape of fire and smoke, and now all that remains to tell where once stood a monument to Chicago enterprise, are a few charged posts and a surface of 200 by 120 feet of valuable soil covered with ashes.

The destruction of this curious and somewhat ungainly structure is really a public calamity. Henceforth, for a while at least, must the elite of the avenues seek skatorial amusement elsewhere, on less inviting parks, or take horse cars for distant West Side structures. But this is not all. This Rink was the place in all the world in which to hold great fairs, give mammoth concerts, and draw elephants in half million gift enterprises. All this is now of the past. And, then, how provoking it is that it should enter upon its own destruction. Just as the skating season was only beginning. No previous winter were the prospects for an uninterrupted term of success so flattering. Already was the regular attendance unusually large, and the public-spirited lessees were busily engaged in adding new attractions for visitors, and several thousand dollars were being exoended simply for decorations alone. But it is all gone now. 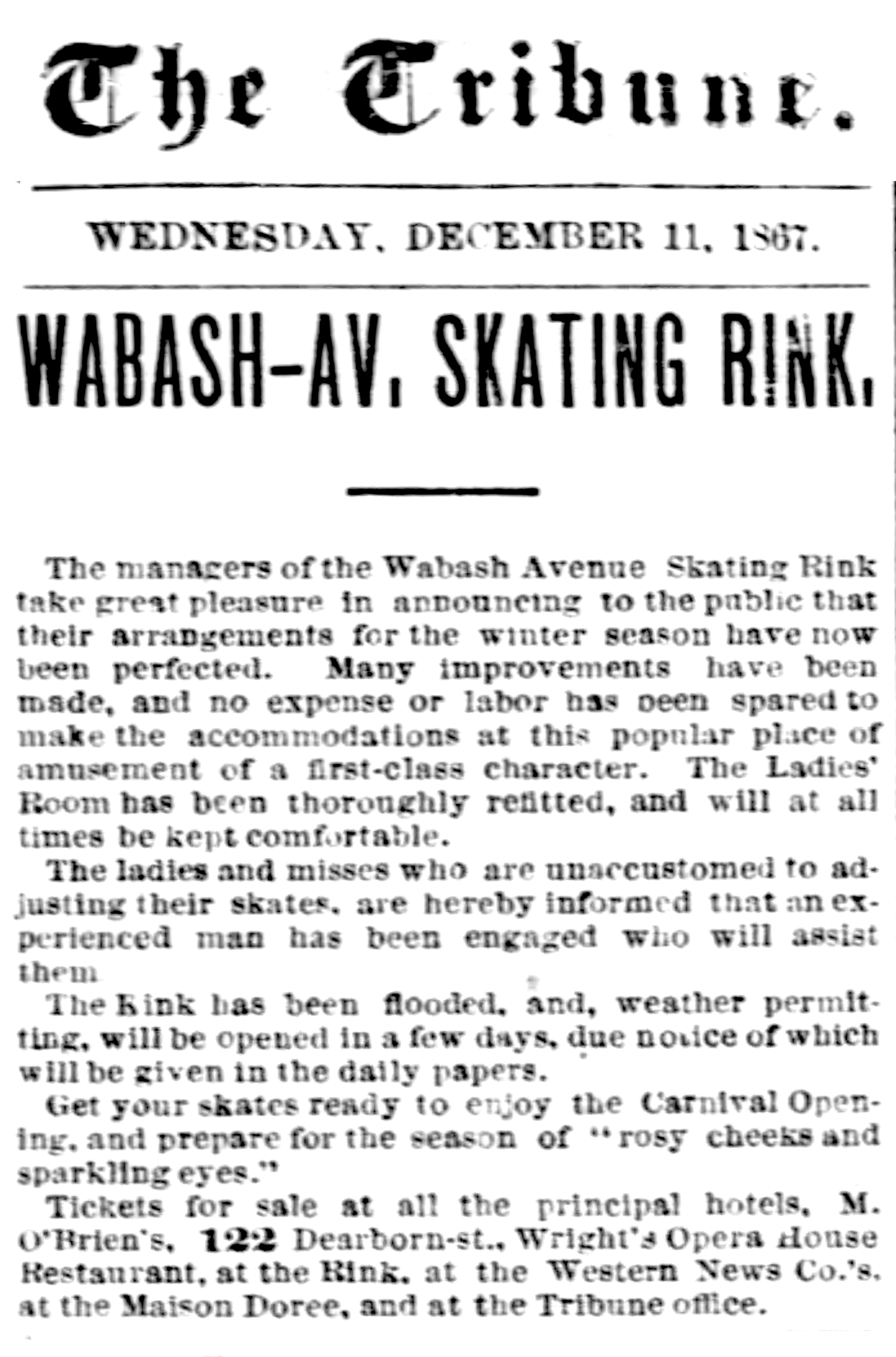 Yesterday forenoon, quite a large number of skaters, brave and fair, were congregated in the precincts. To make things comfortable, roaring fires were built in the stoves that were distributed over the structure, and everything seemed very pleasant, when suddenly the startling cry of “fire” struck terror to the hearts of the assembled skaters. A number of workmen were engaged in the southeast corner of the building, in putting in gas-fixtures, and it is believed that the originated through some carelessness on their part. Then there was hurrying to and fro—principally fro—on the part of the aforesaid brave and fair. In plainer language, there was a grand scramble for the entrance, through which to make an exit. Few took the trouble to unfasten their skates. All seemed to get along pretty well with them on, and many sho had never before ventured on the treacherous irons, suddenly discovered that if the exigency demanded it, they could walk on and over anything. The occasion developed many heroes, and of course, heroines to match. The fire sped along the tar-covered roof with tearful rapidity, and in less than twenty minutes after the first cry of fire, the entire structure lay in ruins. It was with difficulty that the adjoining buildings were saved, the heat was so intense. At night, the fire would have made a great illumination.

The rink was erected a little more than two years ago, this being its third season. It was two hundred feet long by one hundred and twenty feet wide, and was originally constructed at a cost of the $12,000. Since then it has changed hands several times. The present lessees are Messrs. Martin O’Brien, M.O. Walker and Mr. Glover, who paid $2,000 per annum for the lease. These gentlemen are nit intending to cry over spilt milk, but they are now ready to accept proposals for the immediate erection of another structure, to be completed and in use the present season. No time will be lost, and many weeks of good skating may yet to be enjoyed this winter inside of the proposed new structure.

THE WABASH SKATING RINK.
This popular institution, which, it will be remembered, was destroyed by fire about a year ago, has since been rebuilt, and has done excellent service during the summer, in accommodating the festivals of the great German Sängerfeste. It has since been used for a riding school and a paint-shop. It is now undergoing very extensive and thorough repairs, and, in a few days, will be ready for the purpose for wjich it is designed. It is located on the corner of Jackson street and Wabash avenue, and from its position, will probably be a favorite place of resort for for the fashionable people of the avenues. It will possess many more attractors from the old wooden building which occupied its place last season. The accommodations for ladies and gentlemen for refreshments, & c., will be admirable. The prices of tickets of admission have not yet been published, but will probably be the same as the West Side Rink. This and the West Side Rink are the only covered skating places in the city.

The large brick building on the corner of Wabash avenue and Jackson street, known as the Skating Rink, was shaken so by the heavy storm of last evening as to cause the roof to fall in about eight o’clock, and utterly demolish the buisling. It was re-erected two years ago at a cost of $9,500, by a joint stock company. The crash startled the whole neighborhood, and people rushed to the spot in large numbers. The heavy mass of ice and snow accelerated the fall of the roof materially. Very fortunate no one was in the building at the time. Had the accident occurred during the skating season, or when say of the festivals were in progress, the loss of life would no doubt have been great. The building was a weak one, and the oval roof had no centre support.

Messrs. M.O. Walker, M. O’Brien, S.G. Glover, and Wm. Borner, all of this city, were stockholders in the establishment.

Mr. C. Young designed opening it soon for skating purposes, for the last time. Arrangements were being made to lease the rink for five years to New York parties, who were going to open it in the spring as a carriage repository. It is said that a new business block will be commenced upon the site in the beginning of next spring. Several velocipedes and other property in the rink were damaged considerably.

The European Circus is giving performances every afternoon and evening at the West Side Rink. On Monday evening they will open for a short season at the Lake Park, foot of Randolph street.