The ceremony of laying the corner stone of the United States Marine Hospital now in process of erection at Rincon Point, was performed on the 8th of April, with all the usual and appropriate exercises. 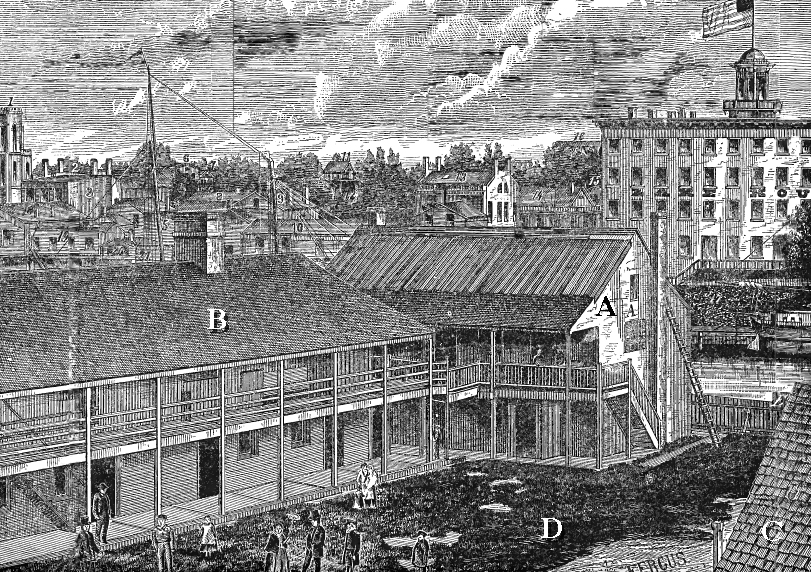 Wood cut from a photo taken in 1855 by Alex. Hesler, from the U. S. Marine Hospital, looking north-west, correctly represents two of the principal buildings of the Fort—the Commandant’s Quarters, Ⓐ (brick, about 25×50 ft.), and the Officers’ Quarters, Ⓑ (wood, about 30×60 ft,), occupying the north-west corner of the enclosure. Ⓒ is the parade-ground (80×200 ft.); Ⓓ is the Sutler’s; Ⓔ is the north gate. The figure in the foreground is J. D. Graham, U. S. Engineer, in charge of Govt. Works, and residing in the Fort, and to his right, Mr. and Mrs. John H. Kinzie. The vessel in the river in the right is the brig Maria Hillard. The Rush-St. Ferry was used to cross the river here, and landed on the South-side at a point, indicated in this view, under the west chimney of the Commandant’s quarters; the direction of the ferry from this point to the North-side was nearly north-west; width of the channel, 225 feet.

The passage of the recent act of Congress authorizing the sale of the present Marine Hospital Buildings, with the ground upon which it is located, and directing the purchase of a larger site farther removed from the city, and the erection of more commodious buildings, is a step which this community will consider wisely taken. The present Marine Hospital, although in every respect, so far as the building and its appointments are concerned, admirably fitted for the reception and successful treatment of patients, is altogether too near the the centre of business, for their well being and comfort. The noise of loaded drays rattling along paved streets, the scream of locomotives, the rumble of loaded cars over the iron track, the shrill whistle of the tugs, and above all, the villainous smells that go up from that sink of pollution, the Chicago river, whenever a passing ship or steamer moves up and down the sluggish stream, tell fearfully upon the health and nerves of the poor sick soldier and sailor. It is not surprising that action is taken to bring about its removal.

The site occupied by this institution is historic. It is located upon the old parade ground of Fort Dearborn. Directly opposite of it stood the old block house which served as the barracks for the garrison, which is now Chicago was an insignificant trading post at the mouth of an insignificant river. A portion of that old block house still remains, and serves a double purpose, a link connecting the past with the present, and a shop for the sale of whiskey. The ground was a part of of the original Fort Dearborn Reservation, and was set apart for hospital uses about the year 1849, in the earlier part of President Taylor’s administration. The building and enclosure wee completed March 15, 1852, and the total sum paid on account of the hospital up to June 30, 1851, was $57,713. It was built by Col. Eaton, brother-in-law of Dr. J.V.Z. Risney, and Colonel, now Brigadier-General J.D. Webster.

It is expected that enough will be realized from its sale to purchase three or four acres upon the Lake shore, probably in the vicinity of Lake View, and and erect the necessary buildings thereon. If this expectation is realized, this community will be largely the gainer.

The Hospital was first occupied in 1852, and placed in charge of Surgeon W.B. Herrick. Dr. Herrick was succeeded by Dr. Chas. A Helmuth, and he by Dr. Daniel Brainard. After Dr. Brainard came, Dr. Brock McVickar, who was again succeeded by Dr. Brainard. After his term of office had expired, Dr. R.N. Isham, the present Surgeon in charge, was appointed. During the past twelve years, over 7,000 patients have been treated. For the past two years, the number has averaged nearly one thousand.

The hospital, as first established, was intended for the reception of seamen only, but since the prosecution of the war has brought into our midst so many sick and disabled soldiers, a portion of the building has been set apart for their use, and the Marine Hospital now contains two hospitals, one for marines, and the other for soldiers.

The hospital fund from which the necessary expenses of Marine Hospitals are paid, is derived from a monthly tax of twenty cents collected fro all seamen employed on board registered steamers and other vessels belonging to the United States engaged in foreign trade, and all steamers and other vessels, including boats, rafts and flats, licensed to carry on the coasting trade, except canal boats without masts or steam power. The seamen who are liable to this tax and entitles to relief are captains and other officers of the vessel, mariners, engineers, coalheavers, firemen, etc., every person whose labor is necessary to working a vessel, or who belongs to a ship’s company.

The first act providing for the relief of disabled seamen was passed by the National Congress as early as 1788. It was slightly improved and modified in `1790, and in 1843 again amended so as to include in the list of beneficiaries seamen employed in the coasting trade, the latter being construed so as to include those engaged in navigating rivers and inland waters. 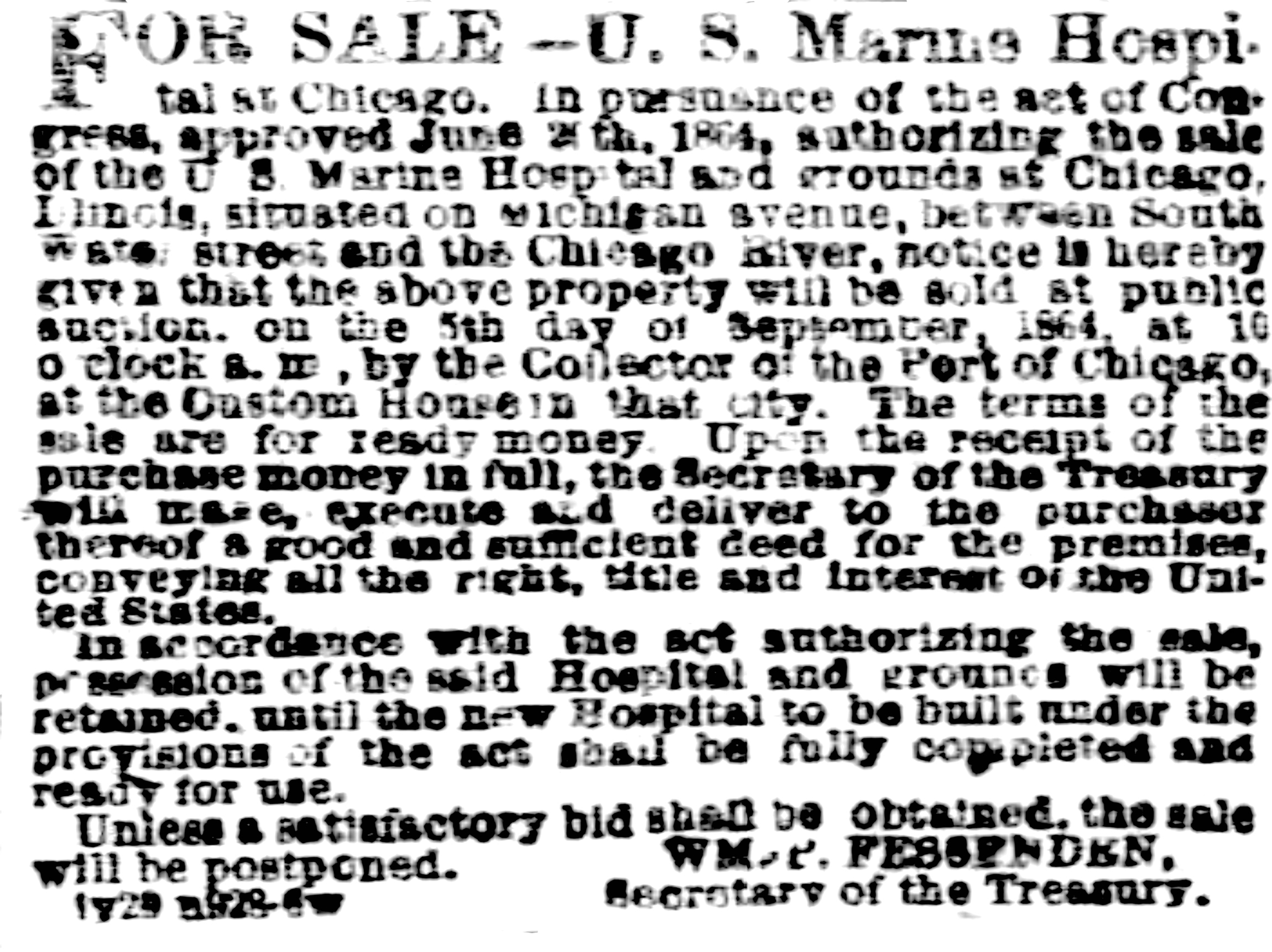 SALE OF THE MARINE HOSPITAL AT AUCTION.—
Acting under orders from Mr. Fessenden, Secretary of the Treasury, Collector Haven yesterday sold at auction at the Custom House, the Marine Hospital and grounds. About a dozen gentlemen were in attendance, one of whom started the Hospital at $80,000. By additional bids of $1,000 each, it got aqs far as $100,000. A succession of offers in the amount of $500 resulted in the bids reaching $132,000, at which it was knocked down to Mr. James F. Joy. The property was sold on the following conditions:
First, The purchase money shall be cash down;
Second, The Government shall retain possession until a new hospital is ready for occupancy;
Upon the receipt of the purchase money, Secretary Fessenden will deliver to the purchaser a deed conveying to him a title of the United States.

Mr. Haven has already advertised proposals for a site on which to erect a new hospital. They will be opened tomorrow. The sale of the premises was dictated on sanitary grounds—the contiguity of a packing house and other places of a similar character, together with the noise and smoking tugs forming a nuisance unbearable by the inmates of the hospital. It is understood that the sum realized will be sufficient to purchase a more advantageous site, and build a hospital better suited to the want of those for whom it is designed.

It will be remembered that James F. Joy purchased the Marine Hospital Hospital site and building in September, 1864, and was to receive possession when the new hospital should be built. As there has been much delay in the work on the new building, Mr. Joy has sought to obtain possession of the old, now burned. His petition asking relief has been reported back from the Senate Judiciary Committee. The committee recommends the that possession be delivered to Joy, and that he be paid interest from the 5th day of September, 1866, to the time of delivery of the possession on the amount by him paid into the treasury for the premises two years previous. 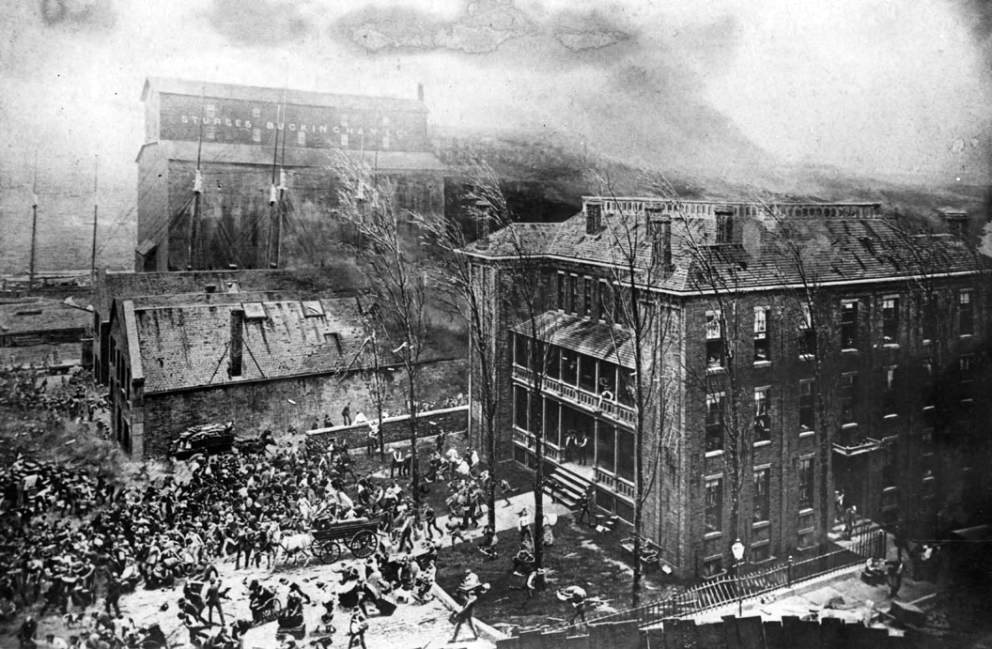 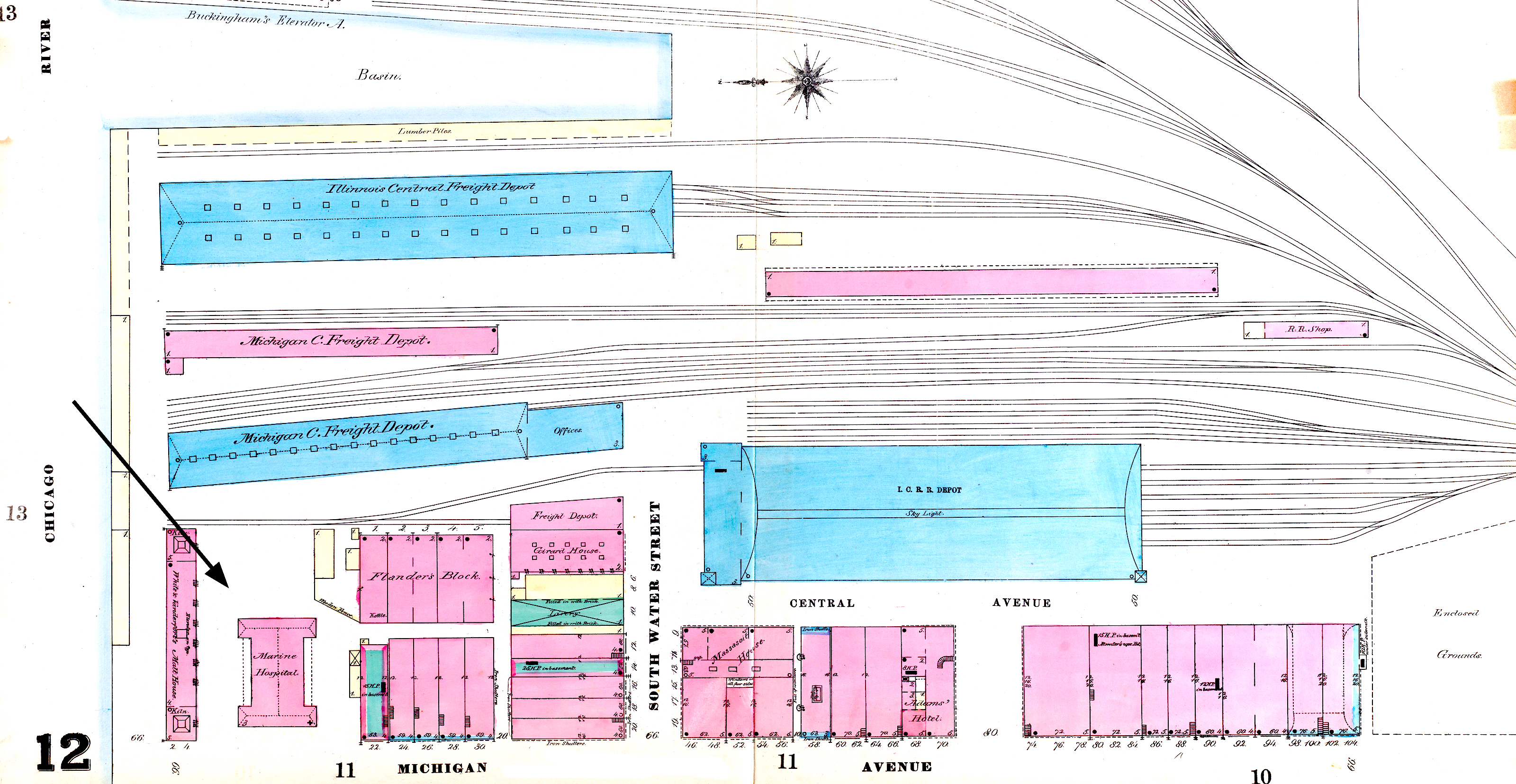 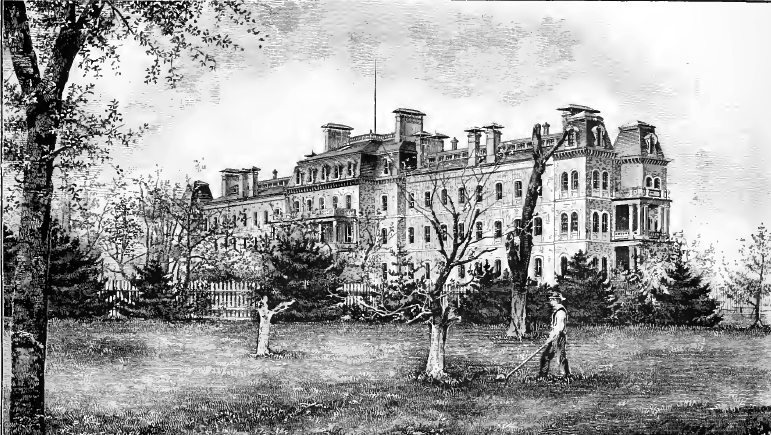 The second Marine Hospital was built at 4141 N Clarendon between 1867 and 1871. It was demolished in 1969 to make way for the Disney Magnet School.