THE MICHIGAN AVENUE HOTEL
Our accompanying engraving shows the new hotel, recently erected on Michigan avenue, corner of Congress street, which was thrown open to the public on September 15th, by the proprietors, Messrs. J.F. Pierson & Co.

In the favorite cities of Europe, the finest and most popular hotels command water views, as for instance, the Grand Hotel de la Pais, on the lake, in Geneva, Switzerland, the Hotel Royal Danieli on the lagoon in Venice, the Cross de la Malta, on the bay at Genoa, and the Hotel Victoria, on the bay of Naples. Situated on Lake Michigan, one of the finest bodies of water in the world, the Michigan Avenue Hotel has an outlook that is unsurpassed and is destined to become the favorite residence of many of our best citizens, as well as the stopping place of many travelers. 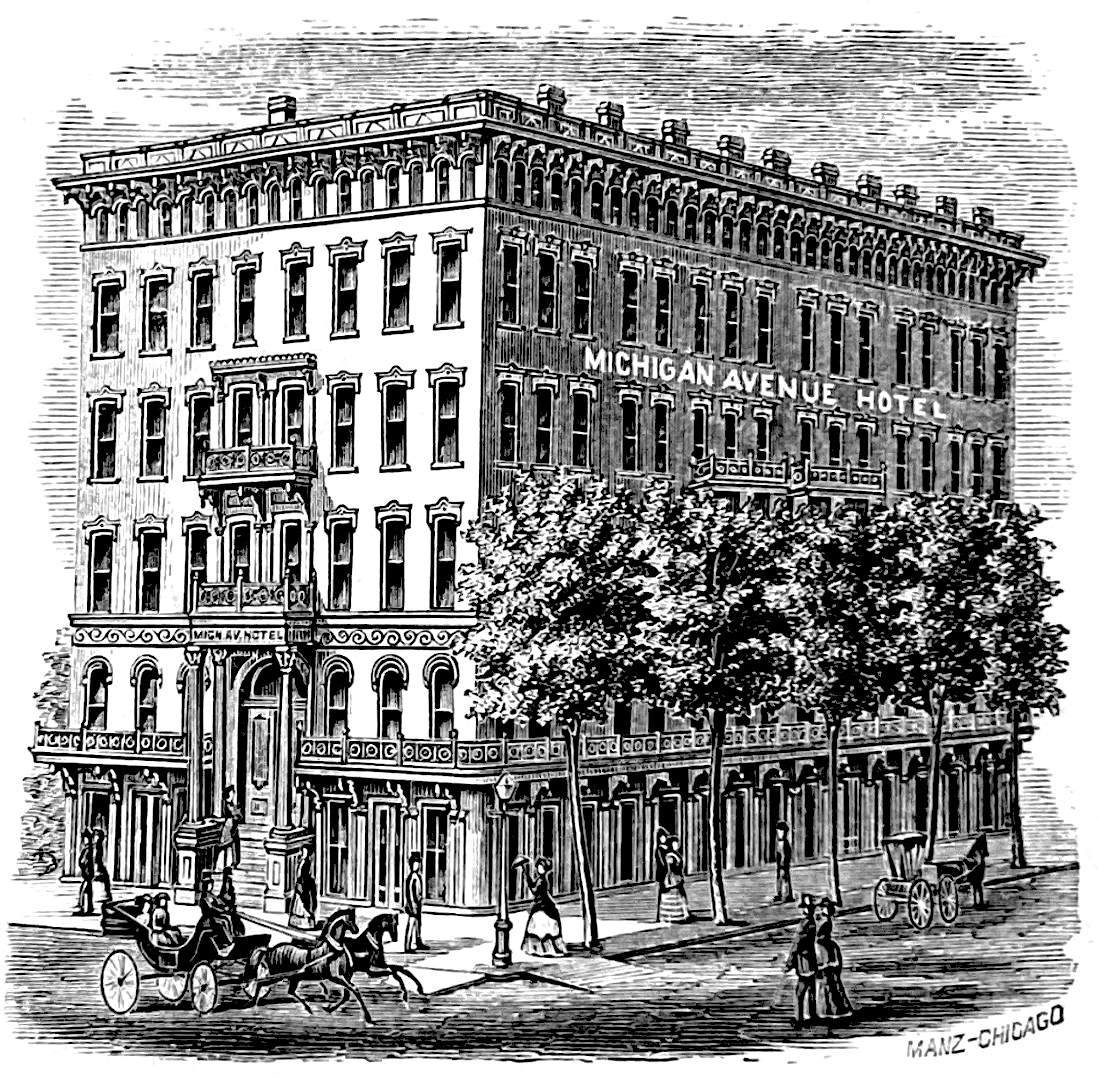 This hotel is six stories in height, with broad balconies extending around the Congress street and Michigan avenue sides. In summer time the long lines of pleasure carriages, the boats on the break-water and the vessels on the lake, will be in full view from the balconies. An elevator carries guests to every floor of the house. Some of the suites of rooms, especially those fronting the lake, are elegant in the extreme, and the whole house is furnished in the most costly manner.

Mr. Pierson, one of the proprietors, is a well known real estate man of this city, having been of the firm of S. H. Kerfoot & Co. As “mine host” he is quite as much at home as when selling corner lots or quarter sections.1

Many of our best citizens and business men have already taken up their quarters at this elegant hotel for the coming winter.

THE MICHIGAN AVENUE HOTEL
It used to be a common complaint that Chicago was deficient in hotel accommodations. That complaint is certainly provided against, so far as the present and future are concerned. Hotels are going up on every hand, in a degree of magniicence not equaled in any city in the country. One of the most complete in every respect to be found, nit only in Chicago, but in America, is the new hotel at the corner of Michigan avenue and Congress street, just now opened, under the auspices of Messrs. J.F. Pierson and J. B. Shepard, both old and well-known citizens of Chicago.

The inner appointments of the hotel are luxurious and convention. The lower floor is devoted to a billiard room, barber shop, with baths, and to culinary purposes. On the second floor are the office, the parlor, reading and dining-rooms, all furnished and fitted up with a degree of elegance unsurpassed. The view from the parlor reaches away out on Lake Michigan, and up and down the avenue—a prospect which has few equals, and where the eye never tires of gazing. The suites of rooms into which the third and fourth floors are divided are are furnished with a magnificent manner, and are provided with all the modern conveniences, such as water-closets and bath-rooms. The view from these rooms, as from all parts of the house, is unrivaled. One of the pleasing features of the hotel is the court, in the centre of which is a fountain perpetually playing water, and around which are arranged al kinds of flowers and plants. This serves to give an oriental aspect to the court. especially at night, when the gas is shining brightly.

The location of this hotel, on one of the most elegant parts of the favorite avenue of Chicago, in full view of the lake, quiet and retired, and yet within only half a mile of the busiest portion of the city, will always make it a popular resort for the better classes. It combines all the advantages of the country or watering-places with those of a large and gay city.

The beautiful carpets which cover the floor of this hotel were furnished by Messrs. Allen & Mackey, of Chicago; the furniture ny Messrs. Thayer & Doty, manufacturers; and the silverware by the Wilcox Silver Plating Company of Meriden, Conn., all on express orders for the hotel.

As the merits of this hotel become more known, b=not only at home but throughout the country, it will in all probability be patronized to the full extent of its accommodations.

THE MICHIGAN AVENUE HOTEL SOIREE
The Michigan Avenue Hotel was all ablaze last evening, and its elegant halls and parlors were thronged with the beauty and fashion of the city. The occasion for yhis display was complementary soiree given by the guests of the hotel to their friends. Except that the place was a public one, though in a select sense of the word, and that the hosts and hostesses were rather numerous, the soiree was, to all intents and purposes, a private affair. All could say, “I invited my friends to mine own house, and made them welcome.” The elegant edifice presented an appearance entirely in harmony with the occasion. Every table, shelf, mantel-piece, and stand was covered with beautiful exotics, and the ceilings and walls of the spacious corridors, dancing-hall, and parlors were festooned with evergreens, presenting a fine contrast to the rich and glowing colors of the carpets, furniture, and hangings. The spacious dining-hall was set apart for the danvers, who circled joyously to the alluring music of redowa and waltz, furnished by Leader Vaas and his able assistants.

Those sober and staid folk for whom Terpsichore has lost her charms, passed a pleasant evening in moving through the elegantly furnished parlors; in viewing the beauties of the conservatory; in listening to the music; and, last. though not least, in discussing the superb reflection spread in an inviting in the manner smaller ladies’ ordinary. All that the season affords—and many things out of season—were there, and proved the culinary excellence of the Michigan Avenue Hotel.

The soiree was in all respects the most fashionable event of the season. In the matter of dress, the display has seldom been excelled in this city. The ballroom was a perfect wilderness of satin, silk, lace, and flowers, and while the styles embraced a hundred varieties, the colors presented all the shades and hues of the rainbow.

The dancing continued far into the night, and if there was one drawback to the full enjoyment of the festive occasion, it was the usual one of being overcrowded. Few regrets were returned by those who received cards. 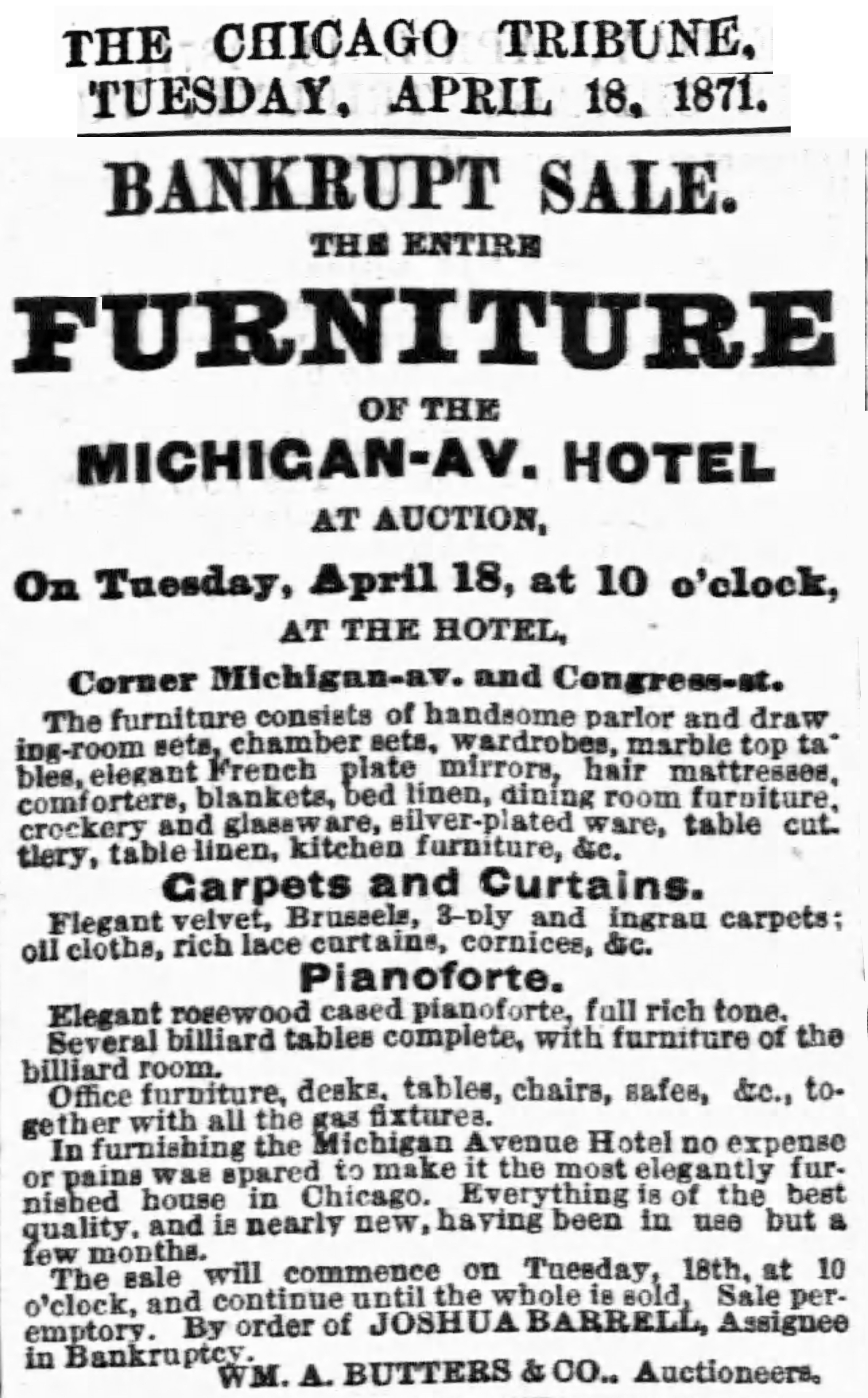 The Tremont House proprietors have purchased the Michigan Avenue Hotel, where they are now stationed.

THE MICHIGAN AVENUE HOTEL
was once a famous building. After the fire it was the only hotel on the South Side. Mr. John B. Drake, with customary enterprise, secured it as the temporary successor of the burned Tremont House. It was the resting place of many illustrious and weary travelers, and the office counter has been honored with many sentimental letters addressed to the distinguished youth, the Grand Duke Alexis, when he made it his temporary dwelling place. Since the great rebuilding, the Michigan Avenue Hotel resumed its ancient and faded appearance. As an hotel it could not hold rank with the Tremont or Sherman, and degenerated as they attracted custom. It was too far south to attract transient visitors, and would have been forgotten but for its destruction. On the eventful morning of Oct. 9, 1871, the dull red bricks of which it was built grew hot with the flames of Terrace Row, when Mr. Scammon’s lovely block of buildings yielded to the fire. Tuesday night it fell before the Inter-Ocean Building.

The damage caused by the Great Fire of 1874, of which the Michigan Avenue Hotel (arrow) was destroyed.

1Samuel H. Kerfoot of 91 Dearborn street, is not to be confused for William D. Kerfoot, 89 Washington street. Samuel Kerfoot came to Chicago from Maryland in 1852 and opened the oldest real estate firm in Chicago, Rees & Kerfoot. William D. Kerfoot was born in Lancaster, Philadelphia, and came to Chicago in 1862, entering the firm of Thomas B. Bryan as a clerk. He later opened his real estate business on Washington street and after the fire of 1871, built his famous shack.