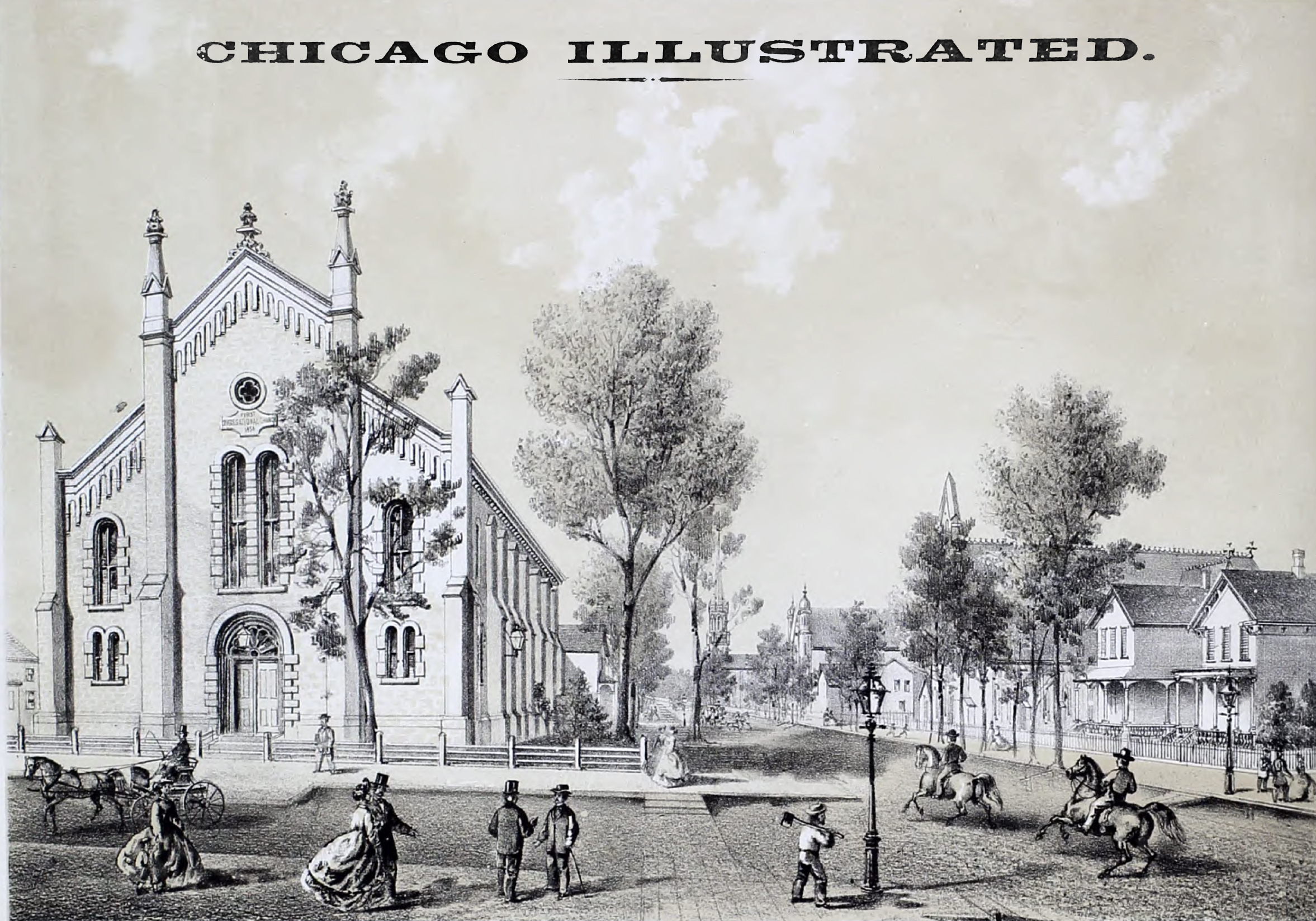 FIRST CONGRESSIONAL CHURCH—This handsome and substantial church building is located at the south-west corner of West Washington and South Green Streets. It is built of stone, the Illinois marble, and is of the most convenient, substantial structure. The entrance leads to a vestibule, from which two flights of stairs ascend to the main audience room. That portion of the church under the auditorium is most admirably arranged for the various spiritual and temporal offices of the church. The pastor’s study, Sabbath school rooms, church parlor, lecture room, and other offices are in this part of the building. The church is furnished with a very fine organ, and an excellent and accomplished choir, though, as in all other churches of the same denomination, the ordinary singing is by the congregation. The cost of the building was $40,000. The architect was E. W. Smith.

The history of this church society is of deep interest. Previous to 1860, the New School Presbyterian Church of the United States held what a number of the members deemed an equivocal position upon the question of slavery. At the session of the General Assembly of that year, no change was made, whereupon, forty-two out of the sixty-eight members of the Third Presbyterian Church of Chicago, resolved that, as long as “this vascilating policy” was pursued, that church would stand aloof from all meetings of Presbytery, Synod and Assembly. The Presbytery of Chicago voted that such action was disorderly, and required that it be rescinded. The Third Church refuses to obey the mandate, whereupon the Presbytery declared that those who voted for the resolution and adhered thereto, had separated themselves from the church, and directed that their names be stricken from the church roll.

The members then essentially ejected from the church, in order to be free from all ecclesiastical control, save that of its own body, organized, according to the Congressional principal, on May 22d, 1851, as the First Congregational Church of Chicago. Forty-eight persons assented to the articles of faith and to the convenant. The first assembled in a small wooden building on West Washington Street, and continued there until 1853, when the building was destroyed by fire. Another wooden building was erected on Green Street, where the church held its services until October, 1855, when the present church building was completed. The first regular pastor was the Rev. George W. Perkins, whose pastorate commenced in June, 1854, and terminated with his death in November, 1856. On the 8th of the succeeding January the Rev. W. W. Patton, the present pastor, was installed.

The number of members in January, 1867, are: Males, 209; females, 312; total, 521. The church has recently completed a mission chapel on the corner of North Michigan and Indiana Streets, at a cost $15,000, and a new church has been organized at that point, embracing over 200 members, 60 of whom were members of the First Church. The various mission Sunday Schools of the church have been gathered at the point and put under the charge of the new church; the combined school now numbering 1,050 children in actual attendance. The building thus erected by the First Church, has been given to the new society. The Sunday School proper of the First Church is in a most flourishing condition, and in all the essentials of a Sunday School, is not surpassed by any other in Chicago. It numbers about 500 in attendance, and Professor J. R. Dowey is the superintendent.

The Rev. Dr. Patton, the pastor, has a national reputation. He will be remembered as the person who, in September, 1862, presented to Mr. Lincoln the memorial praying a proclamation of emancipation, a memorial that was answered a few days later by the proclamation itself. He has been in Europe for several months by permission of his congregation, who continue to salary and defray all his expenses.

On the same print is a view west on Washington Street. The first church on the right is the Cathedral of SS. Peter and Paul —Protestant Episcopal —the Rev. Dr. Whitehouse, bishop. The next is the Second Universalist church; T. E. St. John is pastor; and the third is the Third Presbyterian Church, of which Rev. Dr. Arthur Swazey is pastor.