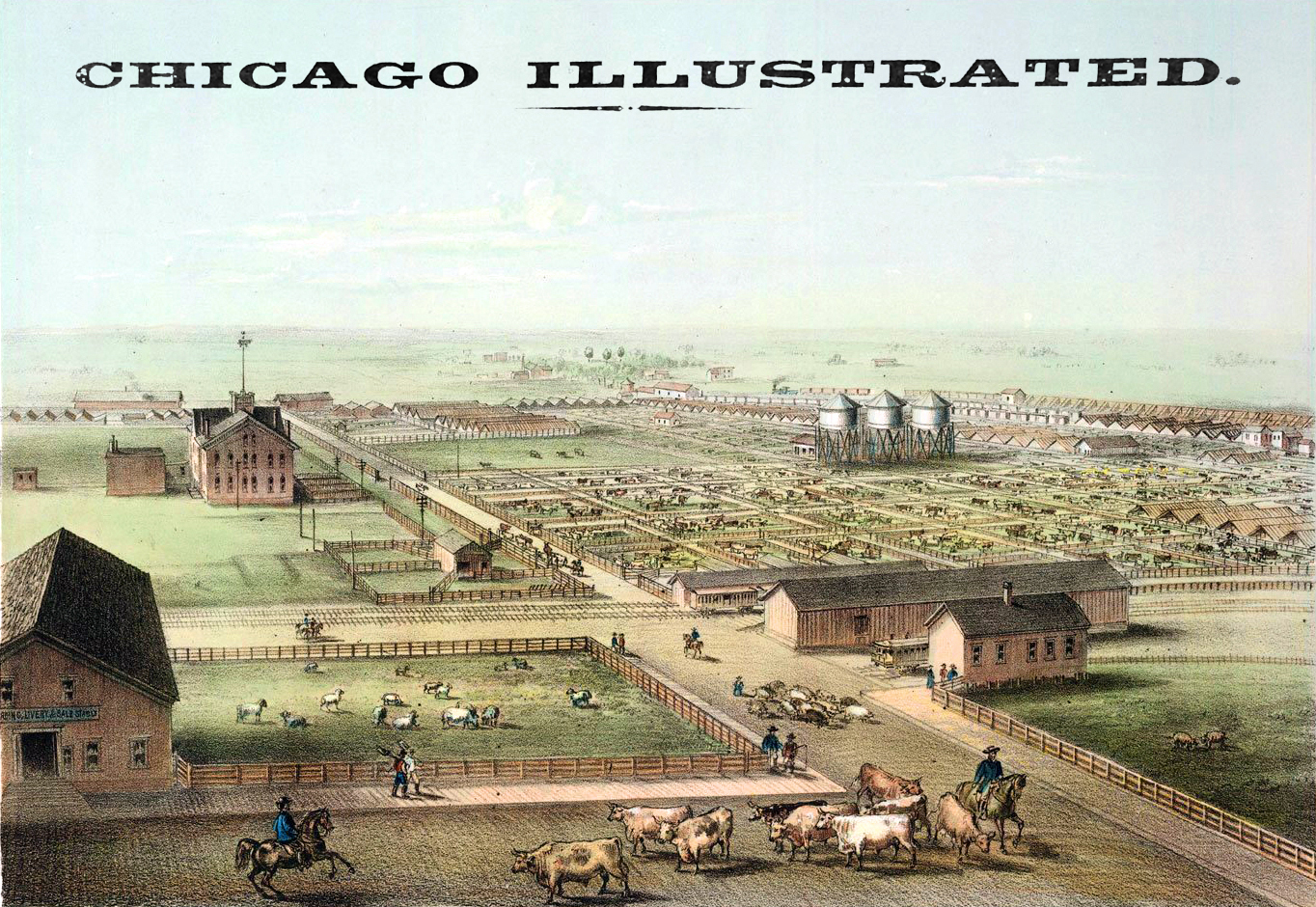 NION STOCK YARDS—The immensity of the cattle trade which made Chicago its centre, was for a long time embarrassed and incommoded by the rivalry of railroads, and the diverse interests of a stock yard for almost every route of travel. A Union Stock Yard became a necessity, and the general enterprise of Chicago triumphed over the contentions of rival interests. The scheme was projected; plans and estimates were prepared; capitalists, railroad companies and cattle dealers saw the advantages, and the scheme became a success almost from its inception. In February, 1865, the Legislature incorporated the company, with a capital of one million of dollars, and the company immediately organized. A tract of land containing three hundred and forty-five acres, four miles in an air line south-west from the Court House, and just outside the limits of the city, was purchased. It was then an open prairie, and the grass was growing upon it with primitive verdure. This track of land was immediately laid out upon the general plan shown in the picture. Through the centre, from north to south, is Avenue E, which is a mile long and 75 feet wide. It is divided into sections for the convenience of driving the cattle to their respective destinations. It is furnished with Nicholson pavement. Parallel with this avenue are other streets heading to the various railroads, which are in turn intersected by other streets. Broadway passes the hotel to the bank and the exchange building. It is 66 feet wide and planked. The “Yards” are divided into blocks like those of the city; the streets are all designated by letters, as are also the various pens and stalls. After the streets and avenues had been laid off the intermediate spaces were divided into enclosures for cattle and sheep. These pens or enclosures are 500 in number, and vary in size, and so arranged that any number can be thrown into one. The gates of these are so made that when opened they block travel on the street, and the cattle, without difficulty, are driven into the yard. The pens for hogs are covered; all others are open.

The yards are furnished with a requisite number of corn cribs and hay barns, and are distributed for the convenience of all parts of the yard.

All the railroad companies of Chicago have tracks running to the yards, with platforms and “shoots” for loading and unloading. The arrangements for loading and unloading are so perfect, that an entire train can be emptied in the time necessary to unload a single car, and cattle can be transferred from the cars of one road to those of the other expeditiously and without loss.

The yards are supplied with water from the Chicago River, half a mile distant. It is then forced into five large tanks, holding in the aggregate 220,000 gallons. From these tanks the water is distributed through pipes into troughs in all the pens. The following figures exhibit the stock business of Chicago during the last year: